For review purposes, the region free European release of the film was used. The only difference is in the lack of European rating symbols, and potentially in the included audio tracks and subtitle selection. All screenshots were taken from a 2D conversion of the 3D disc, and may contain “Floating Windows” framing that is explained in brief HERE.

Love it, hate it, or sit somewhere in the middle on it, Star Wars Episode VII: The Force Awakens is here to stay. It’s been available on home video for 7 months, and I and my colleague have written plenty on the merits of the film previously for the film’s original home video release in April of 2016. 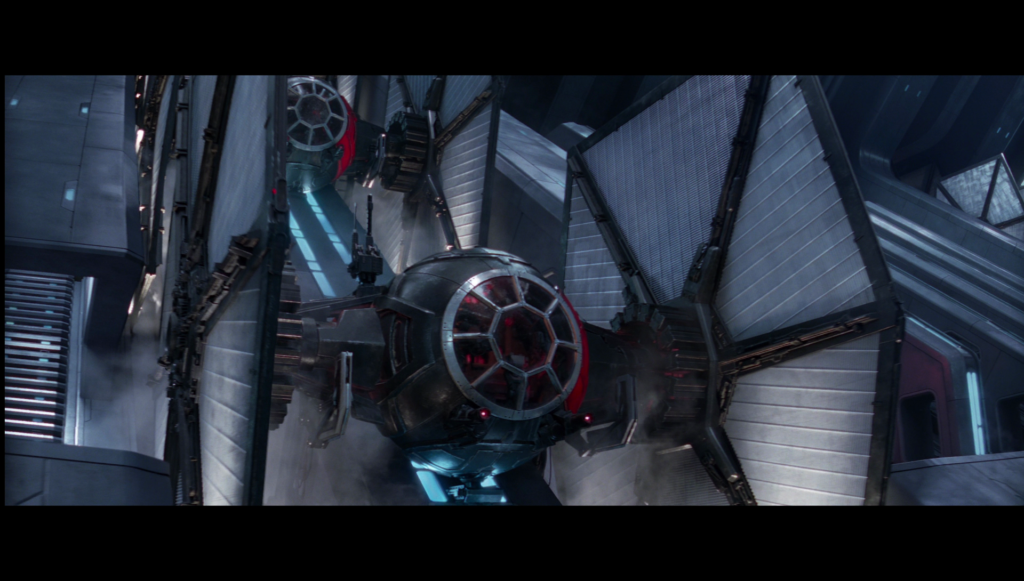 You can find our Dark Side review HERE. 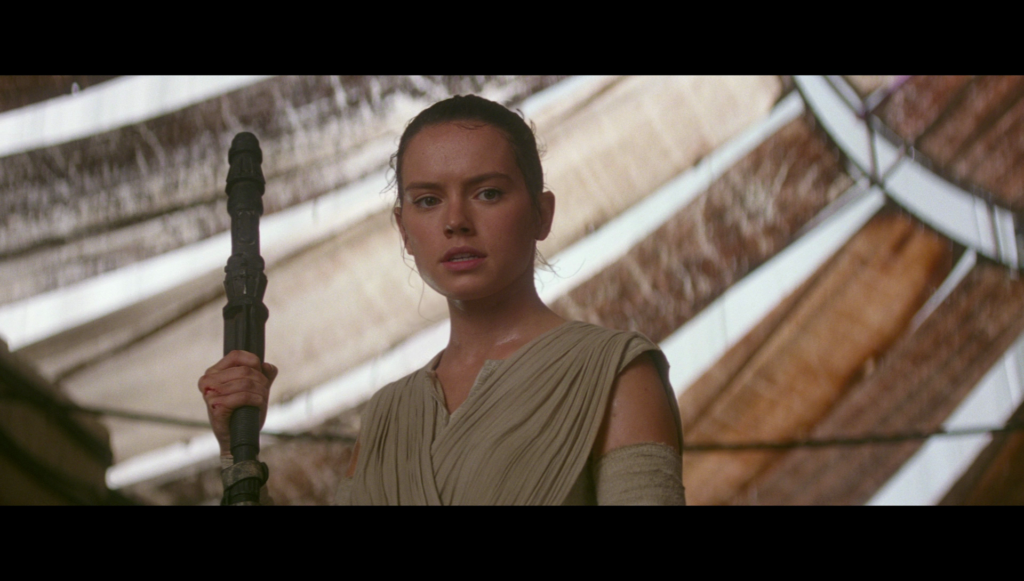 You can find our Light Side review HERE. 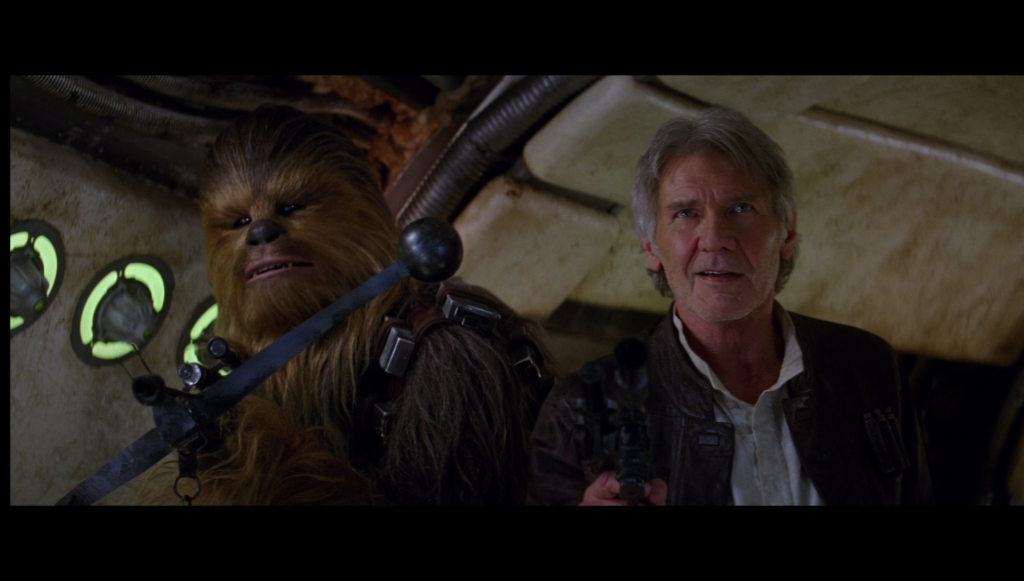 My original review of the film’s Blu-ray release can be found HERE.

Star Wars Episode VII: The Force Awakens Collector’s Edition includes the same 2D video transfer that was included with the various Blu-ray releases that were made available in the spring. There are no changes, and my previously written review stands.

Included with this release is a 3D transfer on a separate disc, based on the 3D post-production conversion of the film as prepared for its original theatrical release.

I waited 8 hours in line for the first IMAX 3D showing of The Force Awakens back when it came out in December of 2015. My IMAX theater, built in the earlier 2000s, is a purpose built IMAX screen, standing nearly six stories in height. It was designed to perfectly fit the IMAX 15-perf 70mm film projection format with a dual SR film projector pair in the booth. Unfortunately, image quality in this theater has suffered greatly with the switch the IMAX 2K Digital projection, as audiences are just too close to the screen, and the 2K resolution is not enough to create a detailed or often even sharp enough image to impress. As a result, I had a rather poor experience with the IMAX 3D conversion of The Force Awakens, finding it to be a murky, low resolution mess with a rather unpleasant and often unnoticeable 3D effect.

Watching at home however on 3D Blu-ray, The Force Awakens is a much different, all-around more positive experience. The image immediately gives off a pleasing amount of depth. It’s enough to give a good distinction between foreground and background. More often than not, this is the 3D effect that is presented. The occasional explosion will shoot out into the foreground at the audience, or ships will float from the background into the foreground for vice-versa, to excellent effect. The 3D almost overexaggerates the shallow depth of field that occurs as a result of shooting using Panaivision anamorphic lenses, resulting in a subtly different viewing experience than on the 2D disc.

The 3D conversion process as presented here features excellent colors on par with its 2D presentation, but is often a less sharp, and less detailed presentation when compared to its counterpart. Grain has essentially been wiped away, outside of a few messy looking 3D close-up shots, and on the LG 3D TV used to view the movie, the occasional CGI effect sequence, or wide shot will display some nasty looking ghosting or artifacting, where things just don’t quite properly line up. Overall, my experience was a positive one, with a few reservations.

My mom however, as she tried to reach out and grab every single Star Destroyer and X-Wing that zoomed across the screen, gave this one a perfect score on the impressiveness scale. 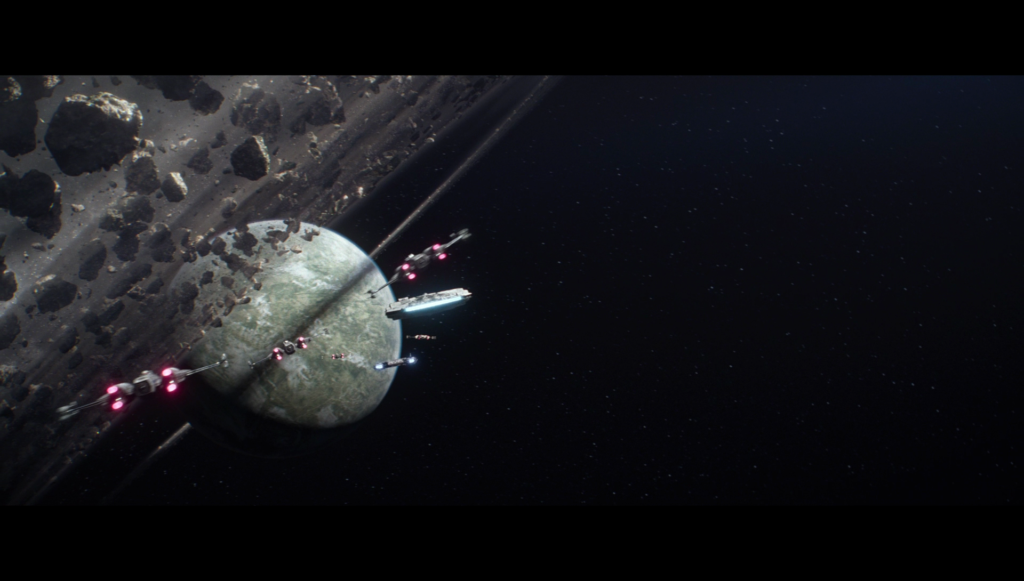 Star Wars Episode VII: The Force Awakens features the identical 7.1 DTS Master Audio surround sound presentation that was reviewed in April. There are no changes.

Star Wars Episode VII: The Force Awakens Collector’s Edition, released to home video by Walt Disney Home Video, is presented in a beautiful, thick cardboard outer box with boasts a black matte finish. The box is mostly quite minimal, but features a lovely lithograph of Rey’s hand holding Luke Skywalker’s lightsaber from the fight aboard the Starkiller Base. 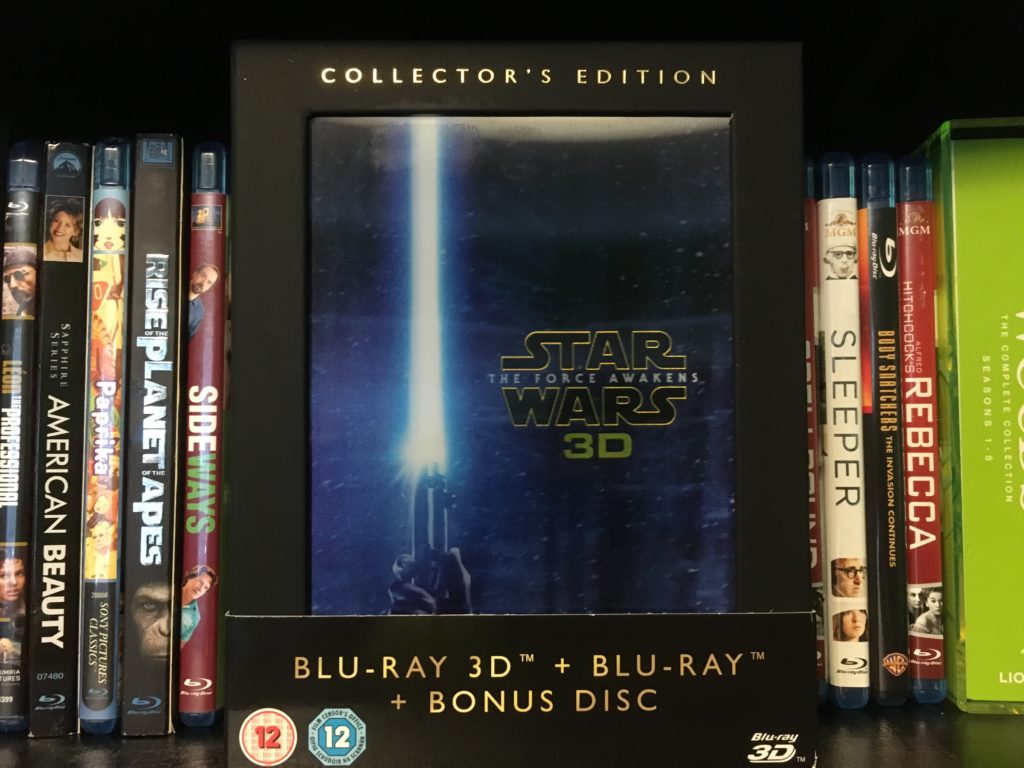 Within the outer box is a lovely full color, tri-fold cardboard case which holds the film’s three discs. The immediate front and back feature two action shots of Rey, one from her lightsaber duel with Kylo Ren, and one of her and Finn escaping from Jakku. Opening the fold reveals the classic picture of Han Solo and Chewbacca as they step onto the Millennium Falcon for the first time in years. Fully opening the cardboard case reveals the film’s 3 discs, each of which has unique disc art, and behind them a full three panel spread of Han and Rey flying the Millennium Falcon together as it enters hyperspeed. This new Collector’s Edition hits shelves with packaging strong enough to rip the ears off a Gundark.

Bold/Italicized = new to this release 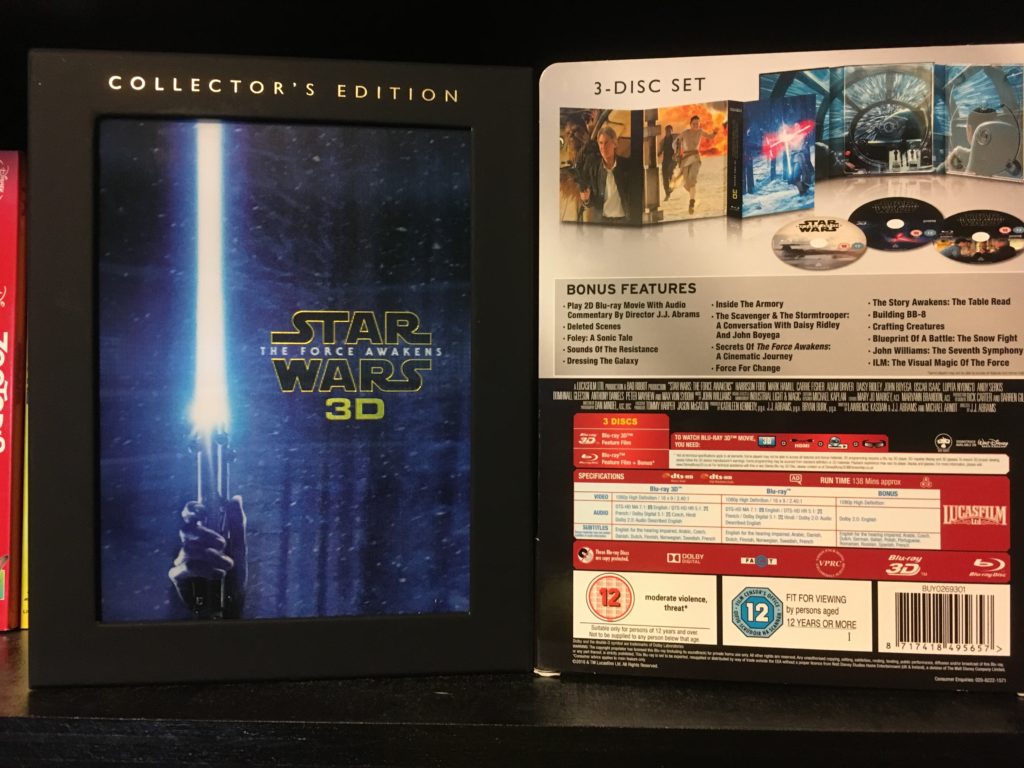 Audio Commentary – Feature length commentary provided by director J.J. Abrams. This is it folks. This is one of the most fascinating and scatterbrained commentaries I have ever sat through. Abrams talks at great length about character motivations, writing the script, his and his peers’ motivations for why they did what they did, and offers detailed breakdowns on the movie’s blending of practical and CGI effects, the editing of the film, and how everything came together over a long, intense shoot. For many of us, this commentary is why we jumped on board with this re-release, and let me tell you, as a lifelong Star Wars fanatic, it’s unbelievable to hear this kind of breakdown from the mouth of the director himself.

Secrets of The Force Awakens: A Cinematic Journey – a feature length documentary, in which we get a thorough account of each of the major sequences of the film. We get a detailed look at the shoot in Abu Dhabi, and sound sets at Pinewood Studios, and how the cast and crew lived in the world of Star Wars during the production. The documentary is an engaging way to spend an hour, and features excellent interviews with many members of of the cast and crew. It gives us an incredible amount of context that most films don’t allow us to look into. This one is absolutely worth your time.

The Story Awakens: The Table Read – a short bit about the table read, in which members of the cast recount their memories of the event. They way they discuss the event, it just makes me wish they’d released the whole thing!

Crafting Creatures – an in depth look at the creation of the various characters, and their backstories. Features appearances from guys like Warwick Davis, the Chewbacca costume, and the team that used CGI to augment the limited capabilities of some of the physical suits. Pretty interesting, actually. 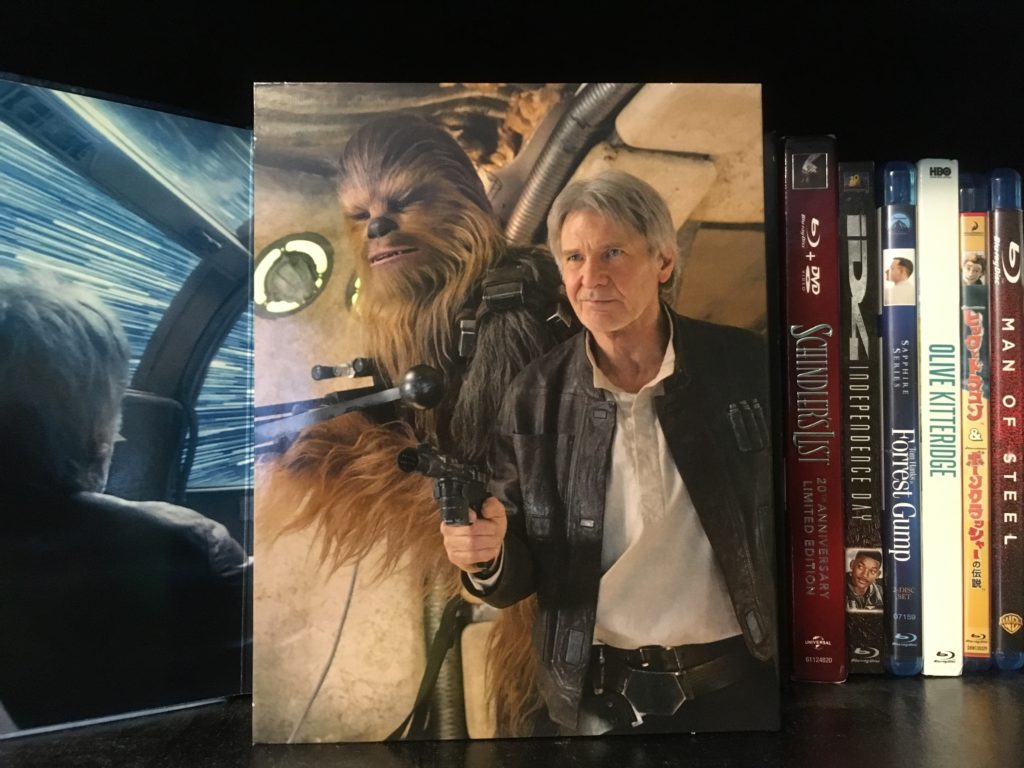 Building BB-88 – an in depth look at the construction of the various models of BB-88, the droid from the new film. The actors discuss the impact of its presence, and the builders go deeper into the various versions of BB-88 that they made for the film. I honestly never expected building a spinning ball to be this complicated!

Blueprints of a Battle: The Snow Fight – a brief look at the construction of the set used for the snow fight sequence from the end of the film, as well as the training that Daisy and the stunt team went through to create the final fight.

ILM: The Visual Magic of the Force – a rather shallow look at the process of designing and implementing the visual effects of Star Wars. Nothing too exciting here, just surface glimpses at how it all comes together.

John Williams: The Seventh Symphony – a quick look at the process of creating the score for The Force Awakens. We get to hear a small bit of what John Williams thought of when he created these new themes, and variations. It’s absolutely awe inspiring to watch him conduct like this. I love it.

Inside the Armory – a brief look at the designing, and redesigning of the weapons for The Force Awakens. They discuss the use of 3D printing, the designing of the the new lightsabers and blaster weapons, and the construction of Rey’s staff. A fascinating look at all of the work required to create these props 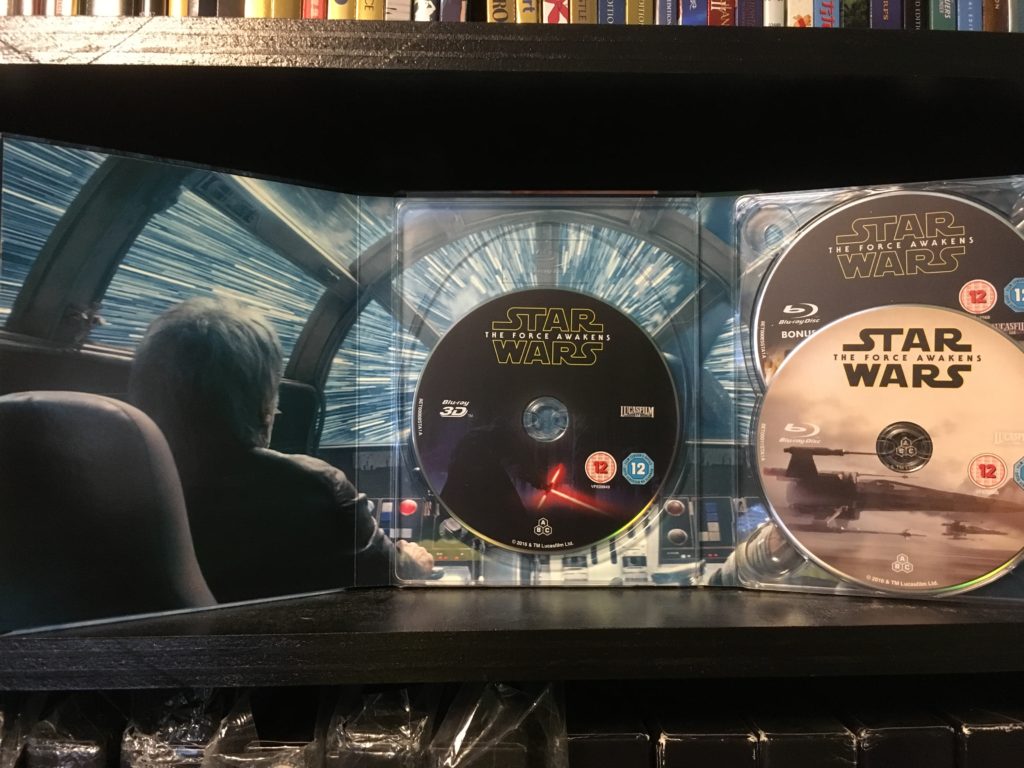 The Scavenger and the Stormtrooper: A Conversation with Daisy Ridley and John Boyega – an 11 minute long conversation in which they discuss their thoughts and memories about shooting in the desert, being on set with various Star Wars legends, getting to work on the Millennium Falcon, establishing chemistry, and various other topics. Ends in a rather cute, amusing way. I liked this one a lot.

Deleted Scenes – A few new deleted scenes are included on top of the five or so minutes worth of deleted scenes included with the standard release, mostly having to do with adding extra humor into the film. The scenes themselves are amusing, but would have most likely crippled the scenes they were cut from.

Force For Change – the 3 minute ad for the charitable foundation created to raise money for UNICEF in the name of Star Wars, featuring Kathleen Kennedy and J.J. Abrams, who talk in detail about the results of their work.

Foley: A Sonic Tale – a 4 minute piece, which explores the efforts taken by the foley artists who worked on The Force Awakens to create the subtle sound effects of the film at the Skywalker Ranch.

Sounds of the Resistance – a 7 minute feature in which the people in charge of designing the overall sound mix for The Force Awakens, including industry legends Ben Burtt and Gary Rydstrom, discuss various anecdotes from the production of the film, and how they found certain sound effects and created the sounds of the film’s most iconic characters.

Dressing the Galaxy – a 6 minute piece that celebrates the work of Michael Kaplan, who was responsible for creating the costumes for the film’s cast of characters.

Ultimately, beyond the inclusion of the Target Exclusive Edition’s features, and a brief, but in depth look at the film’s sound and costumes, the bonus disc offers little that wasn’t already available for fans to enjoy. The real reason to purchase this edition comes with the incredible packaging, and the legendary commentary performed by director J.J. Abrams who offers a unique insight into creating the return to the Galaxy Far, Far Away……

Do you have a 3D TV? Buy this edition. Do you like gorgeous packaging? This edition is totally for you, and looks amazing, even on a shelf. Does the idea of a few new extras, and two hours of stories and unique facts from the director himself intrigue you? This is the release of The Force Awakens you have been waiting for. This package features the same great audio and video that was provided in April for the film’s initial release, but unites the various exclusive features and adds a few new ones into sweeten the deal. Add to that a brand new 3D conversion of the film for 3D fans, and brand new packaging on top of that, and you have yourself a hell of a Blu-ray release. Recommended.