2016 marks the 50th anniversary since the first airing of Star Trek on the NBC network. More specifically, Thursday, November 3, will mark exactly 50 years since the airing of the ninth episode of the first season of Star Trek, “The Dagger of the Mind”. Released to coincide with Star Trek’s Golden Jubilee, Star Trek Beyond is a fantastic film that gives both fans and newcomers to the franchise a reason to celebrate fifty years of a fantastic show. 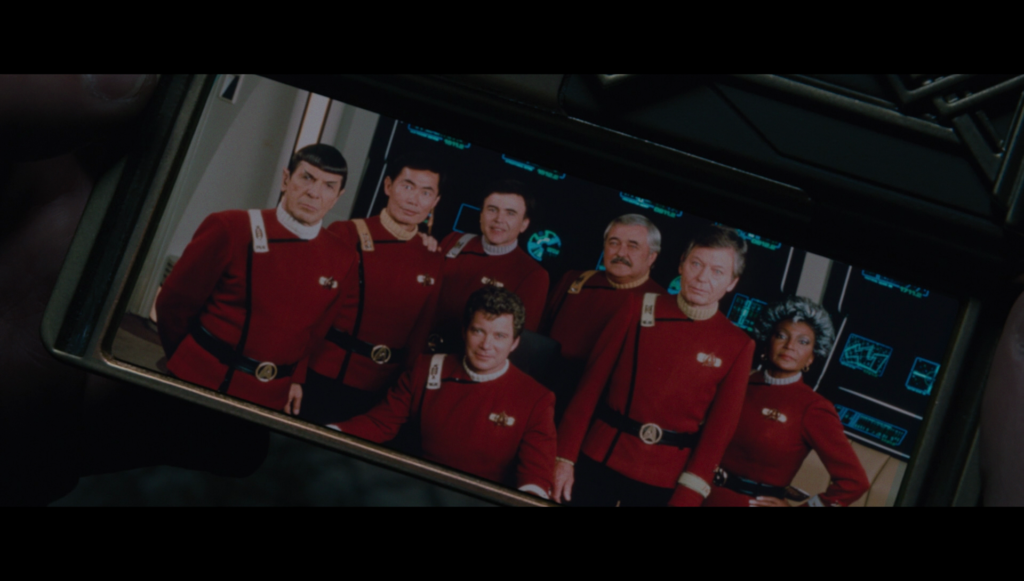 Star Trek Beyond breathes new life into JJ Abrams’ rebooted universe. Abrams put together a fantastic ensemble cast for Star Trek (2009), and they give their most compelling performance yet in Beyond. Series creator Gene Roddenberry and the original actors of the show in 1966 placed a lot pride in the work they put into Star Trek, and that same pride is evident in the work director Justin Lin and his crew put into this film. Beyond also delivers some much needed fan service by playing homage to recently deceased Star Trek actors Leonard Nimoy and Anton Yelchin.

What makes Beyond stand out from the previous two Abrams flicks? Unlike the previous films, the comradery of Star Trek’s classic characters dominate the film. Comradery plays a role in the previous films, but you don’t really see as many of the genuine heartfelt interactions that are present in Beyond. Abrams’ other Star Trek films also had a very pessimistic tone in their outlook, and Lin and Pegg wisely chose to eject the pessimism for a more hopeful tone in Beyond. 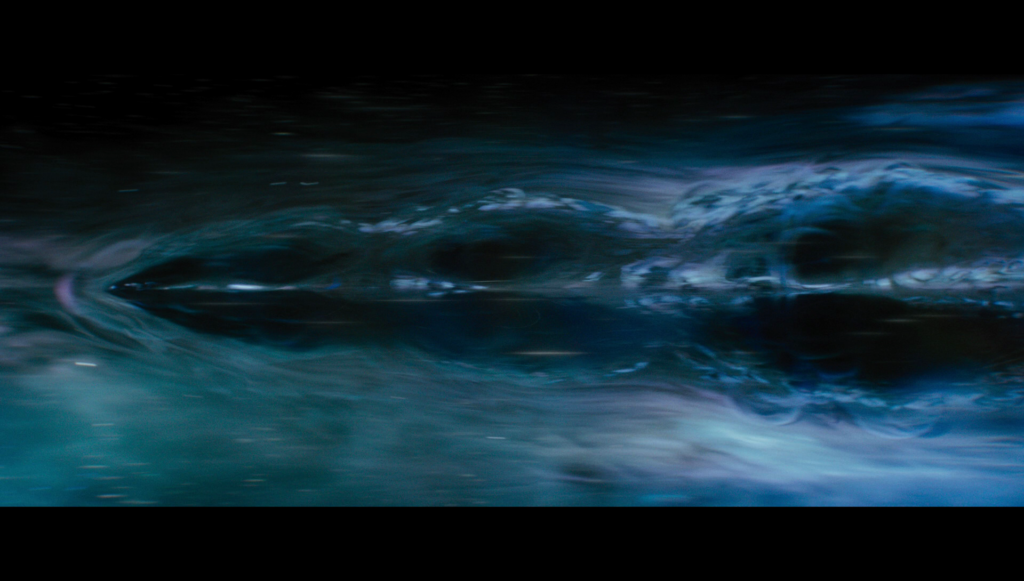 Star Trek has always been about promoting a hopeful vision for the future of humanity. Abrams, Roberto Orci, and Damon Lindelof crudely attempted to use Star Trek Into Darkness (2011) as an allegory for demonstrating the abuses of the Patriot Act. Themes of terrorism remain prevalent in Beyond, but they are used here with a very different purpose. Our crew doesn’t simply survive or stall evil in Beyond, they sit down and prove it wrong every step of the way. The film’s villain, Krall, is taken aback repeatedly by the intrepid audacity of a crew he believes he already defeated. 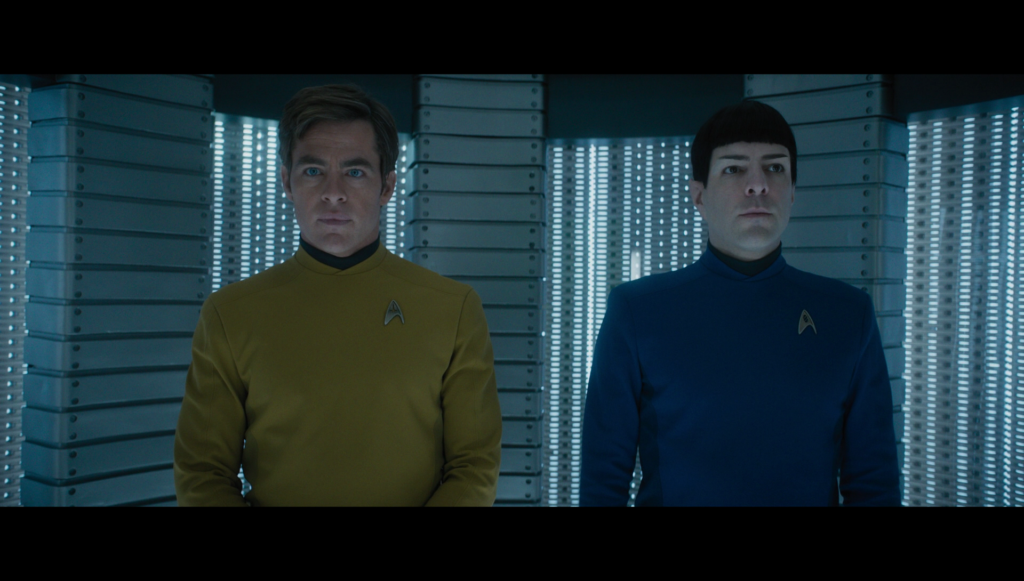 Pegg made the brilliant choice to make the characters sit down and ask themselves what is the point of their mission in space? They’ve already conquered the impossible and seen the worst that both humanity and inhumanity has to offer, what is there left to do in a universe they’ve already conquered? These characters were not given much time to think about themselves before Beyond and it’s incredibly refreshing to see such fantastic and personal character moments occur on screen. Each member of the ensemble, from Kirk to Keenser, is given an opportunity to showcase themselves in this film. 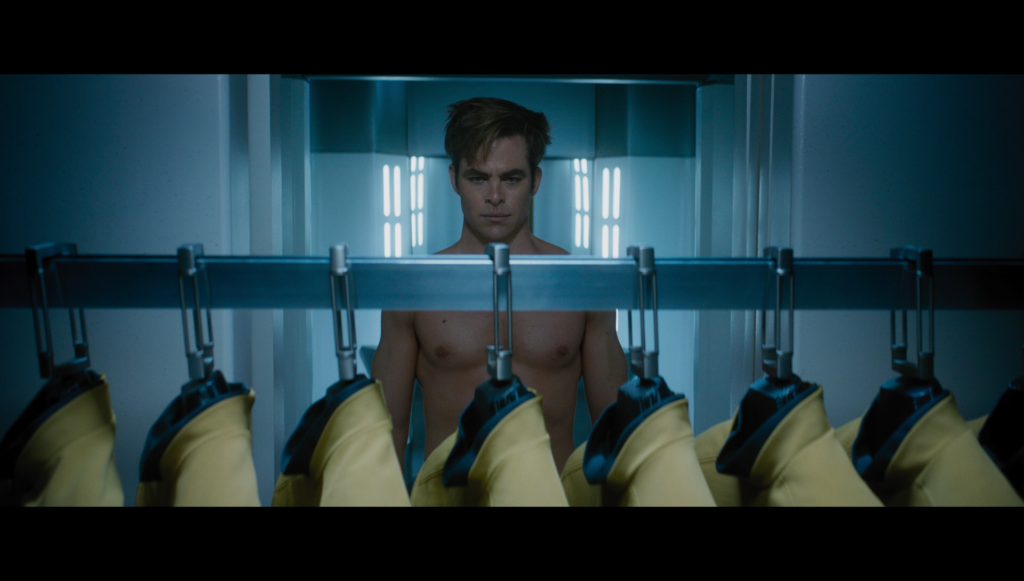 I’d be lying if I said I wasn’t concerned when they announced Lin’s spot in the director’s chair. Lin is most famous for his Fast and the Furious films, and I assumed he would turn Beyond into a mindless car chase movie. I’m glad to say I was proven wrong. Beyond is as smart as any Star Trek out there, and Lin’s flair for action adds a great deal to this movie. Beyond features some of the funnest action scenes I have ever scene in a Star Trek movie. It’s a bit hammy when Kirk happens upon a dusty motorcycle, but Lin makes you love it anyway. 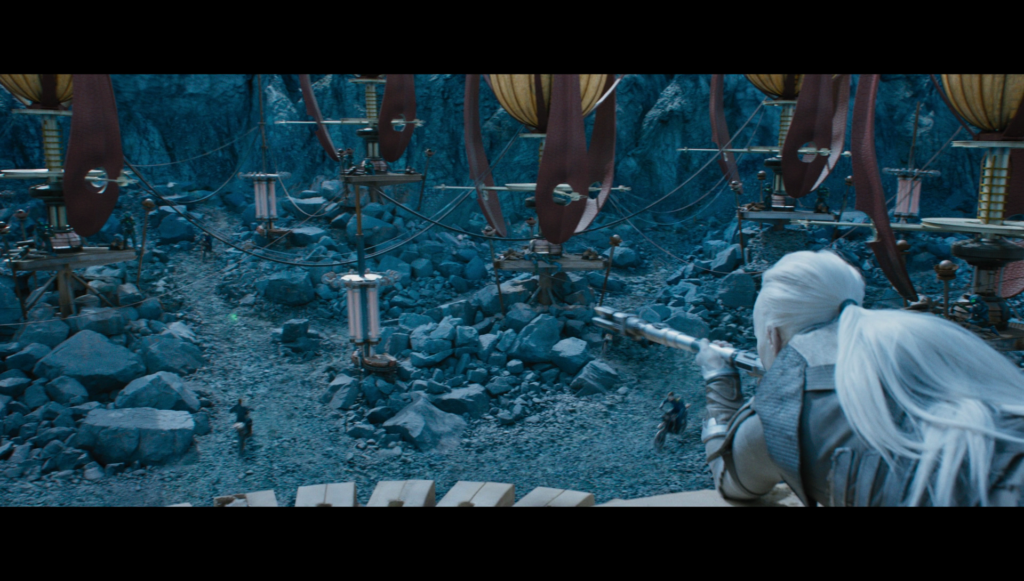 What’s wrong with Beyond? Not much really, this is one of the best big studio films to release this year. The biggest complaint I have with the movie is the lack of development for the film’s villain, Krall (Idris Elba). Krall shows a great deal of potential as a convincing movie villain but there’s just not enough meat here to make you care about his defeat. His subtle transformation in the movie is intriguing, but it is very poorly explained. Beyond does a fantastic job building up the protagonists, but they seem to do it at the sacrifice of a making a convincing villain.

Beyond’s cinematography is very down to Earth compared to  the previous two films directed by Abrams. Abrams shot several scenes in IMAX for Into Darkness, and added a lot of brightness and color to his Star Trek films. The uniforms which previously glittered on screen have been toned down, and the Enterprise interiors are more drab and not nearly as reflective as they appeared in the previous films. 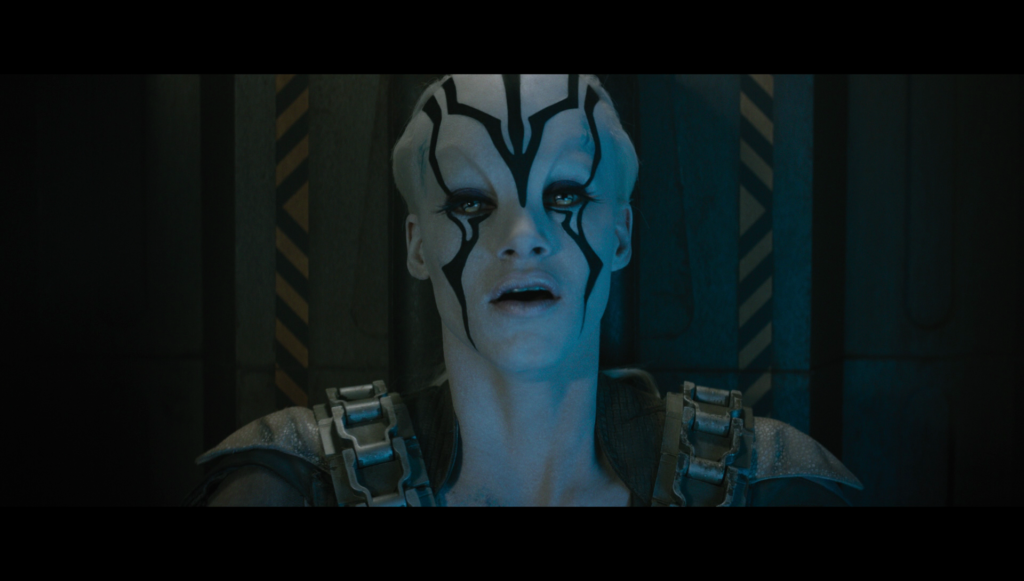 Some people have bemoaned the lack of color in Beyond, but I think this was a positive choice that made the film much easier to view than its Abrams-directed counterparts. Lin feels no need to give you the first person roller coaster experience that Abrams is famous for pushing into his movies. He lets the action speak for itself, and leans on long panning shots that give the viewer a bird’s eye view for the mayhem happening on screen. You can pause an action scene in Beyond and pick up an extraordinary amount of detail in most of the frames. Paramount spent a large chunk of change on the effects in Beyond, and the attention to detail put in by the FX team was worth every penny. The Enterprise is as majestic as it has ever been in the post-2009 universe, and the sets on Yorktown and Altamid are also very impressive in their scope and detail.

All of this looks fantastic on Blu-ray, and I was shocked to read this film was mastered on 2k. They’ve really pushed under-4K digital filmmaking to the limit with Beyond. Lin does as much, if not more here without the IMAX footage we got in Into Darkness. 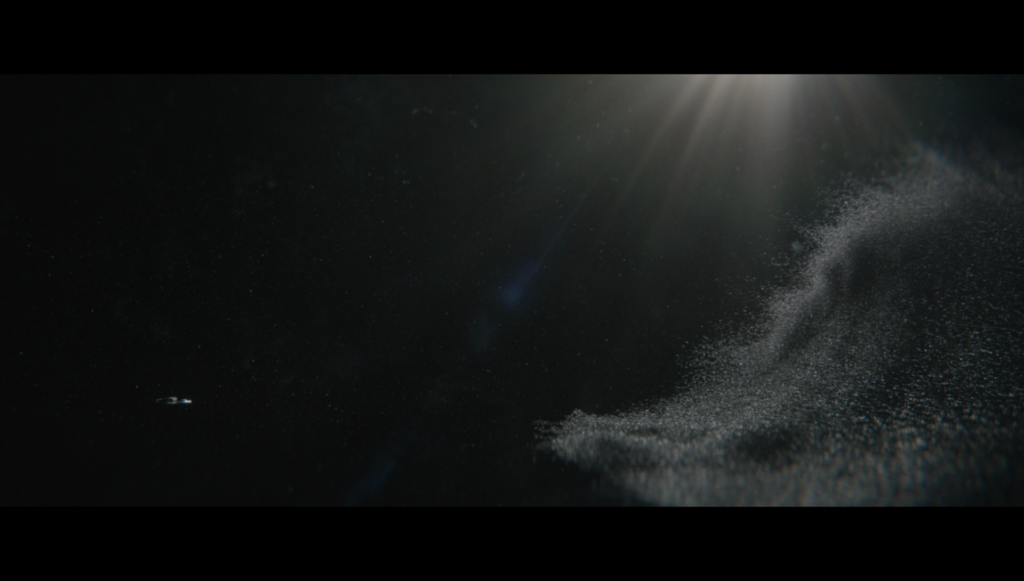 Beyond features some great audio engineering as well as a gorgeous orchestral score and soundtrack. Beyond moves deftly between quiet moments of character development and bodacious Lin-fueled action scenes. The surround sound mix is incredibly competent on my 5.1 receiver. The action is palpable, but never too loud and the characters are always easy to understand. Once scene which incorporates the soundtrack into the film drew some criticism amongst fans, but I personally thought that was an incredibly fun scene and a great example of creative ways use of music in a film.

Star Trek Beyond has been released to Blu-ray with a variety of retailer exclusive forms of packaging. Featured here is the steelbook packaging, exclusive to Best Buy. 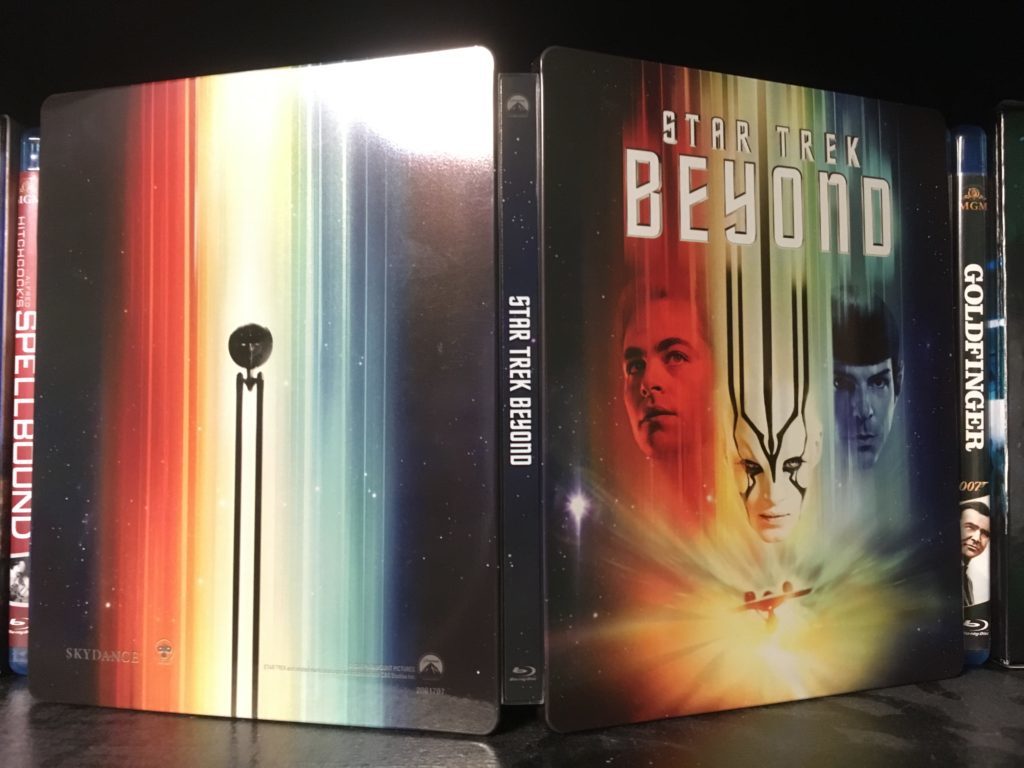 The metallic casing is beautiful, featuring a spread of three of the film’s main characters above the Enterprise in full color that echoes the promotional art and home video release packaging of Star Trek: The Motion Picture. 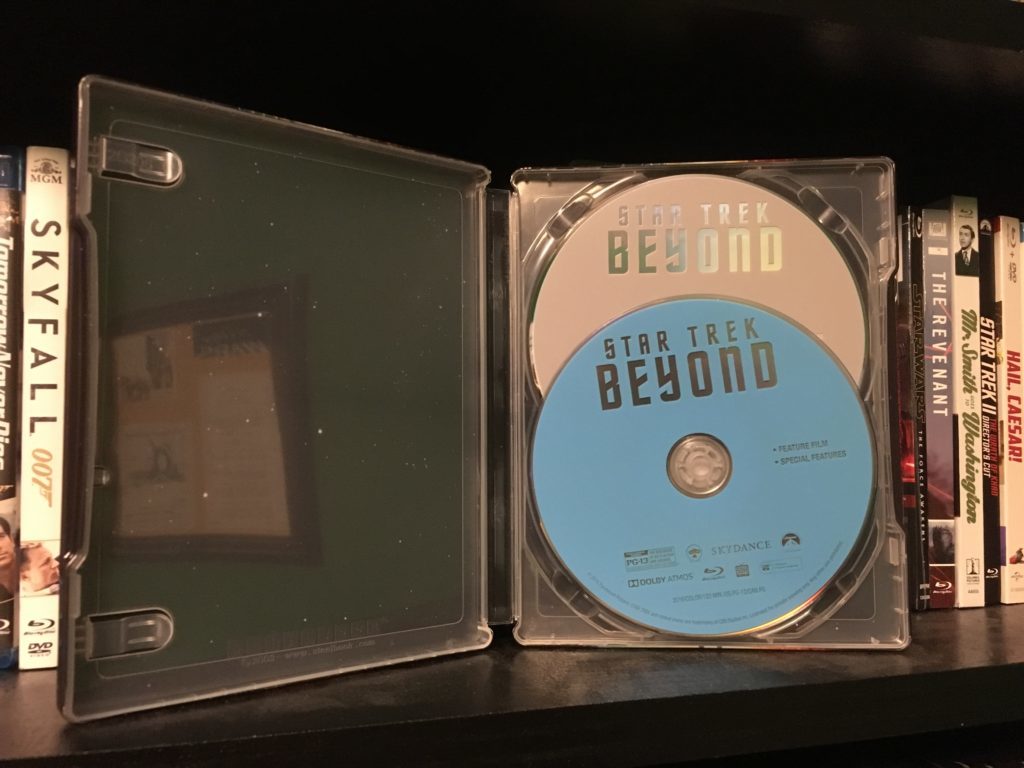 The back artwork features an image of the Enterprise soaring through the space, colored in a similar style that’s an homage to the promotional material for The Motion Picture. The inside artwork just features a spread of stars and black space, but with such a beautiful outer art design, I find little to fault in this steelbook release.

Beyond the Darkness – a 10 minute break down of the circumstances that lead to the production of the film, casting and creating the new characters for the movie, and designing some of the main set pieces of the film.

Enterprise Takedown – a 5 minute piece, in which the cast and crew discuss the motivations and creation of the sequence in which the Enterprise is destroyed in the film.

Divided and Conquered – an 8 minute piece in which they discuss splitting up the Enterprise’s senior staff splitting up on the planet, and the situations that allowed them to explore.

A Warped Sense of Revenge – a 5 minute breakdown of the motivations and ideas behind the film’s villains.

Trekking in the Desert – a 3 minute piece on the film’s location shoot in Dubai, which was used as a stand in for the Yorktown space station.

Exploring Strange New Worlds – a 6 minute look into the massive work that went into designing the film’s sets and overall production design, featuring great looks into the film’s pre-production elements.

New Life, New Civilizations – an 8 minute feature that looks into the creation of the aliens and creature costumes and designs for Star Trek Beyond.

To Live Long and Prosper – an 8 minute piece featuring the cast and crew celebrating 50 years of Trek on TV and screen, and what it means to all of them.

For Leonard and Anton – a 5 minute tribute piece to the acting careers and lives of Leonard Nimoy and Anton Yelchin, who both passed before the release of the film.

With 11 features of varying depth and material covered, there is plenty here to satisfy fans of Beyond. It isn’t quite as impressive as the wide variety of material generated to cover Into Darkness, but I felt the material here was interesting enough to make up for it. 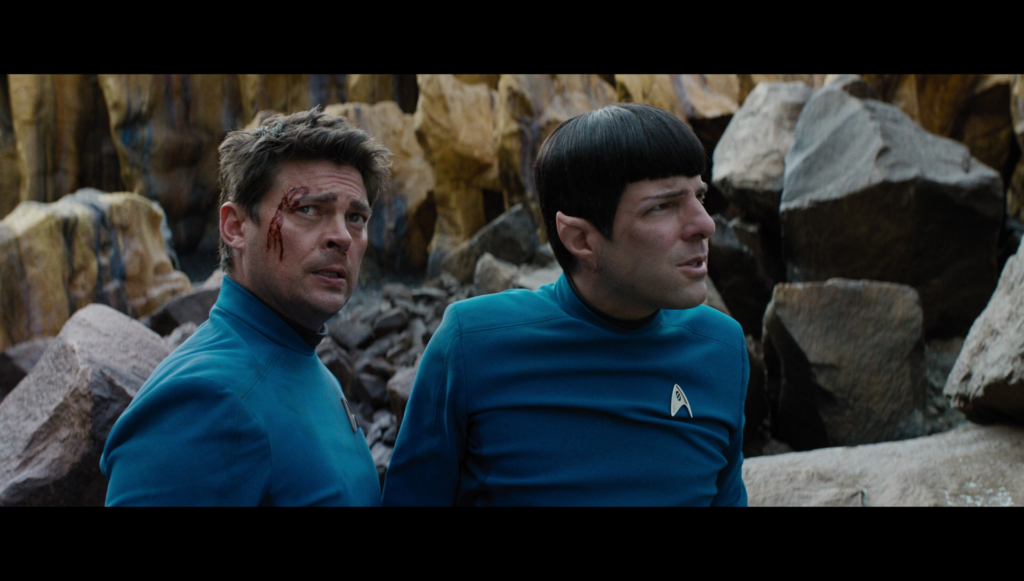 Star Trek Beyond is a fantastic celebration of fifty years of Star Trek. Even if you’ve never been a big fan of Star Trek, there is a lot here to enjoy. Lin brings the same energy he put into his Fast and the Furious films, and manages to sensibly incorporate it with the unique sensibilities of Stark Trek. Lin updates the look of the Abrams universe to give this film its own style compared to the previous two entries. Pegg and Doug Jung do a great job making a compelling narrative, and the actors remain top notch in bringing these fifty year old characters to life. If you had any skepticism about the quality of Beyond, I hope this article has done enough to convince you it is worth a watch. Lin and crew have made a gorgeous film and I can’t wait to see what strange new worlds are left to be explored in the rebooted Star Trek universe. 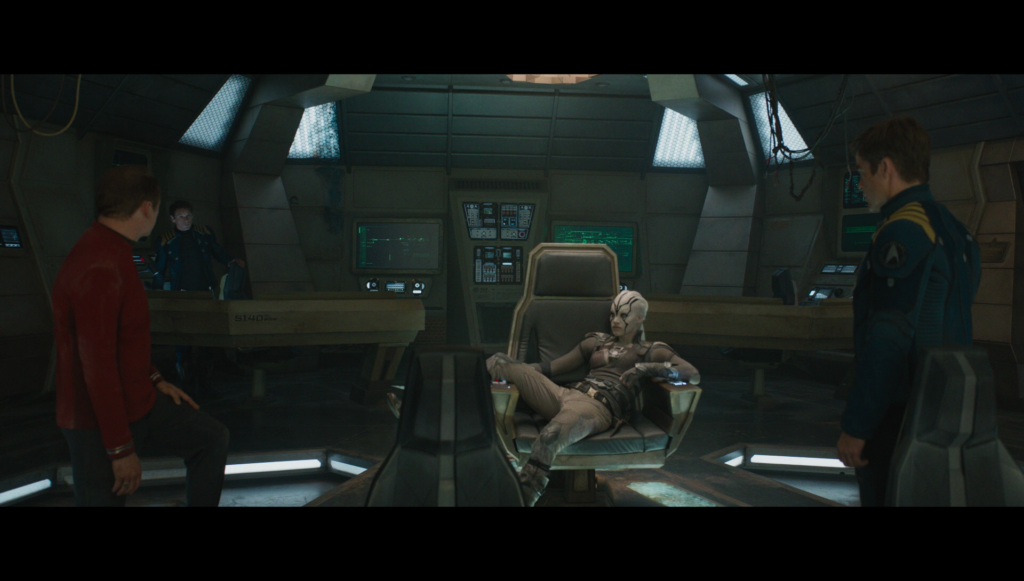