Standing Tall is at its core, a message film about a delinquent who is forcibly removed from his mother’s care, and passed around from place to place, self destructing in almost every possible situation. After watching the film, I have a hard time identifying just what its message is, as it could easily be slanted in two different directions. Directed by French actress turned director Emanuelle Bercot, the film is passionately acted, comfortably paced, and moving in many ways. I just can’t quite figure out what the story is trying to tell me about society – more on that in a bit. 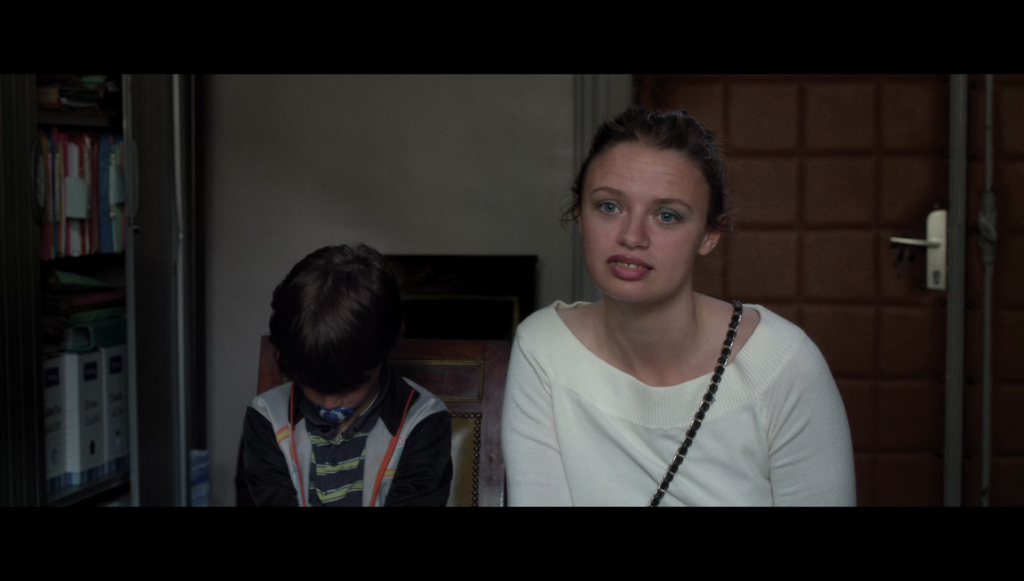 The film follows the life story of troubled French teenager Malony, who in the opening scene is abandoned by his mother in the office of a French judge at the age of 6, and is soon after transferred to a children’s home. The film then picks up during his teenage years, where he’s constantly causing disaster – stealing cars, robbing people with brute force, and generally lashing out at anyone who tries to break the surface of his tough exterior. After being given multiple chances by both local law enforcement and various government employees, he is sent to another home for troubled boys, where they attempt to reform him and channel his emotions. From there, employment is provided for him, and he even meets a girl. Unfortunately, in spite of all of this, he breaks down and returns to his old ways, and is imprisoned. From prison, he must learn how to reform himself for his family, the people who have cared for him most, and the girl that he loves. 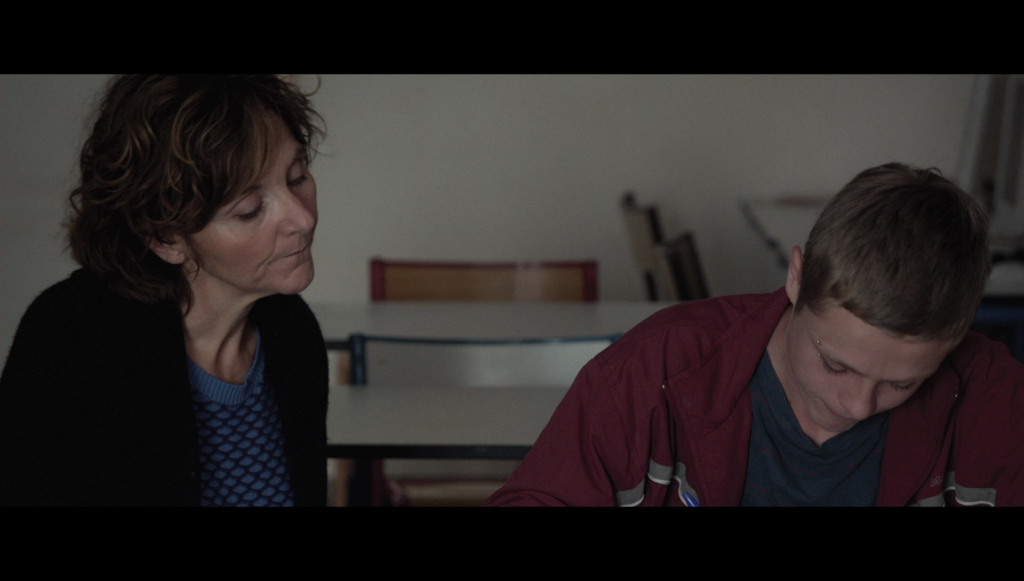 Standing Tall is a tough film, one that is filled with outbursts of rage, mistakes, and general aggression towards people from our main character Malony, played with conviction by newcomer Rod Paradot. Through his experiences, we get a picture that highlights just what is wrong with the way modern western societies handle children from broken homes. At the age of 6, he is cast out from his mother’s home, and shuffled from place to place, where people try to reform him to their image of the ideal man. Various characters such as Judge Blacque, played by the always lovely Catherine Denevue, keep on giving him chances in a number of state sponsored institutions, but he always ends up somewhere why the try to force a trade on him, or mold him into their ideal model citizen. People get frustrated with him, and lash out at him, but never stop to talk to him. What this boy needed was some support, someone to talk to or perhaps even some intensive therapy, but instead he is constantly imprisoned by a state that doesn’t even try to understand him, outside of a brief moment of therapy shown on screen late in the film. 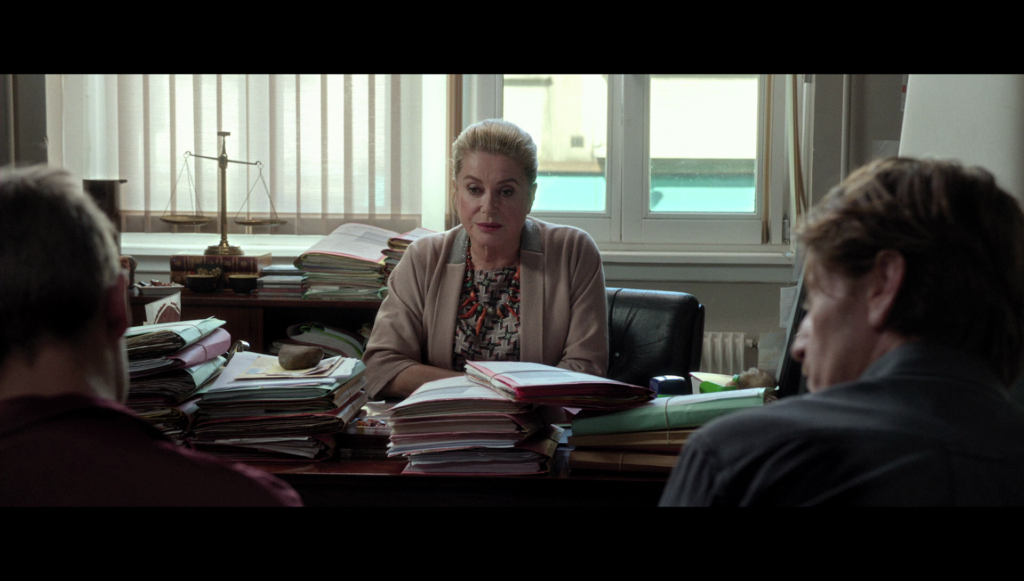 The film constantly shows us the dangers of treating troubled children like this, as Malony continues to act out worse and worse as the film progresses, pushing his caretakers to the limits and nearly destroying his drug addled mother – who seems to have been brutalized by the same system and as her life collapse in parallel to Malony’s. The story is tragic, and stressful. It seems so true to life, that as the film reaches its climax, the biggest piece of heartbreak is how far the movie strays from the idealogy it seems to push so aggressively. Instead to giving us a slice of realism, it resolves everything cleanly, and leaves us with a shimmering glimpse of optomism, which almost invalidates the brutal first two acts of the film. It seems to tell us that this system of rehabilitation needs to be restructured from the ground up, and then pulls a, “haha, just kidding” moment in the film’s last twenty minutes or so. 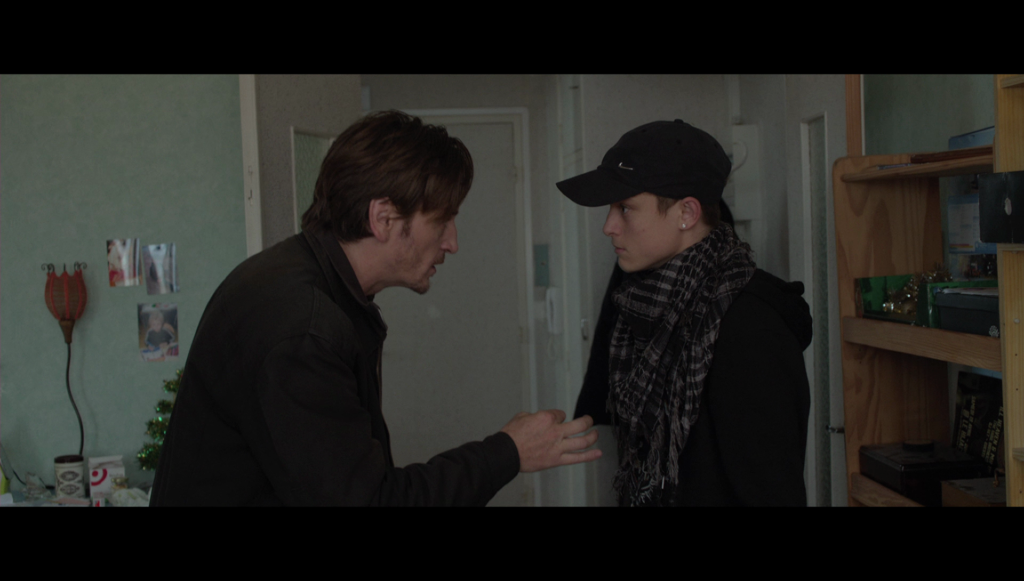 For its strong, almost overwhelming first two acts or so, Standing Tall is an engagingly tragic story, about a boy who is essentially marginalized by a system that doesn’t want to understand him at all, even when surrounded by sympathetic figures and a strong support system. It trips in its ending, invalidating incredibly strong performances by its leads, telling us that eventually this system works, even if it takes ten or more years, something that I’ve yet to see backed up in reality. What was an eye-opening tale about how disgruntled children are handled in a recession wraught society becomes something of a fantasy in the end. It isn’t unwatchable by any means, it just feels moderately incomplete, like someone got nervous and inserted a happy ending into the finale.

Standing Tall was shot using the Arri Alexa XT Camera in 2.8K resolution and mastered using a digital intermediate for a final theatrical aspect ratio of 2.35:1. On home video, the film is presented in 1080p, maintaining the 2.35:1 aspect ratio. 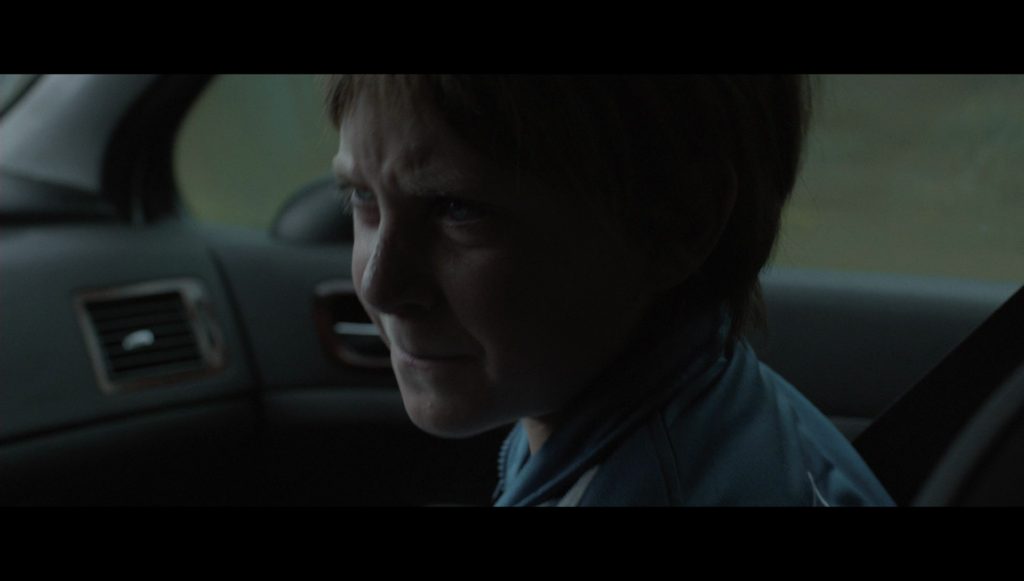 Standing Tall, although shot for a scope aspect ratio, is a fairly close and intimate film in terms of how it was shot. Many sequences take place in small rooms and are shot using the mid-shot composition style. As a result, many shots lack much tangible detail, most likely a combination of the shooting style and lenses used for the production. Color is solid, but never quite exciting as the production tends to lean towards a more realistic portrayal of the environments of the film. The film is covered with a light layer of artificial film grain which never becomes intrusive, or even noticeable except in select shots. It looks good, but never really impresses.

Standing Tall features a DTS-Master Audio 5.1 surround sound track in the original French language. As far as listening experiences go, Standing Tall is pretty standard – dialogue locked to the center channel, music and sound effects tossed to the left and right, and minimal surround usage. It uses the most conservative application of subwoofer activity possible. It’s a talk heavy movie, and has a sound track to match. 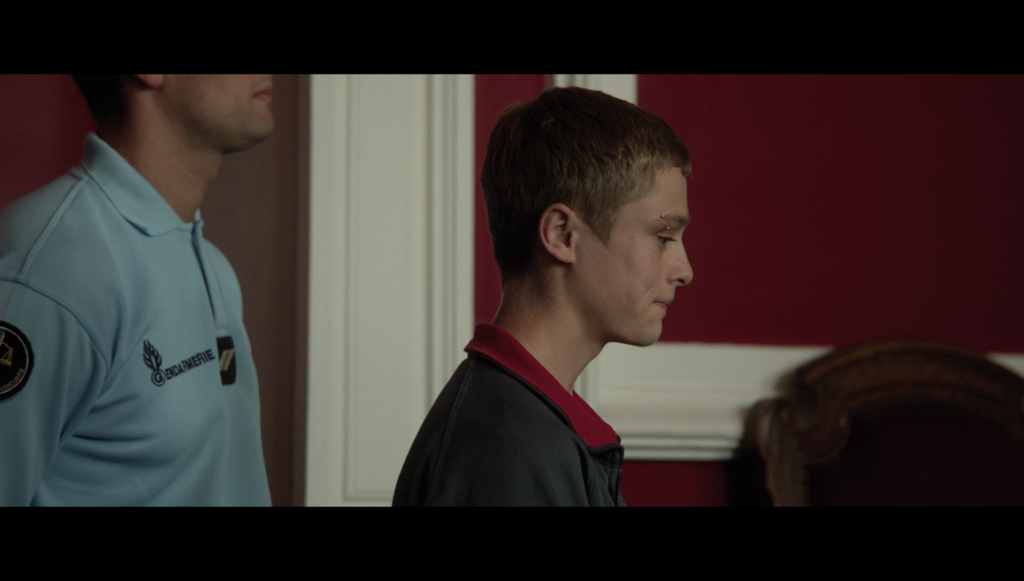 Note: There are a few scenes with loud outbursts of screaming that actually started distorting, and although I feel that it is a source limitation, it does not sound good whatsoever. Puts an ugly stamp on an otherwise average track that I felt was worth deducting half a point from a 3 score. On top of that, the default audio track was the compressed Dolby Digital 5.1 track, which meant that I had to toggle the DTS-MA track manually. Annoying, but not the worst thing.

Standing Tall, released to home video by Cohen Media Group, comes packaged in a standard keepcase. The front artwork features a minimal awards poster for the film with two of the film;s leads, some awards logos, the film’s title and some major names from the film. This is, of course, surrounded by the standard red and black borders that feature the Cohen Media Group Logo. The back artwork features 3 character portraits from the film, a paragraph about about the film, a list of features, credits, and technical features. Inside the case, we have a full color booklet with pictures from the film, as well as a list of chapters, cast and credits. The inside reveals inner artwork that captures a frame from one of the nicer moments from the film, framed for its original aspect ratio. Cohen releases typically feature rather basic outer out work, but what’s inside the case is always stellar. This release is no different. 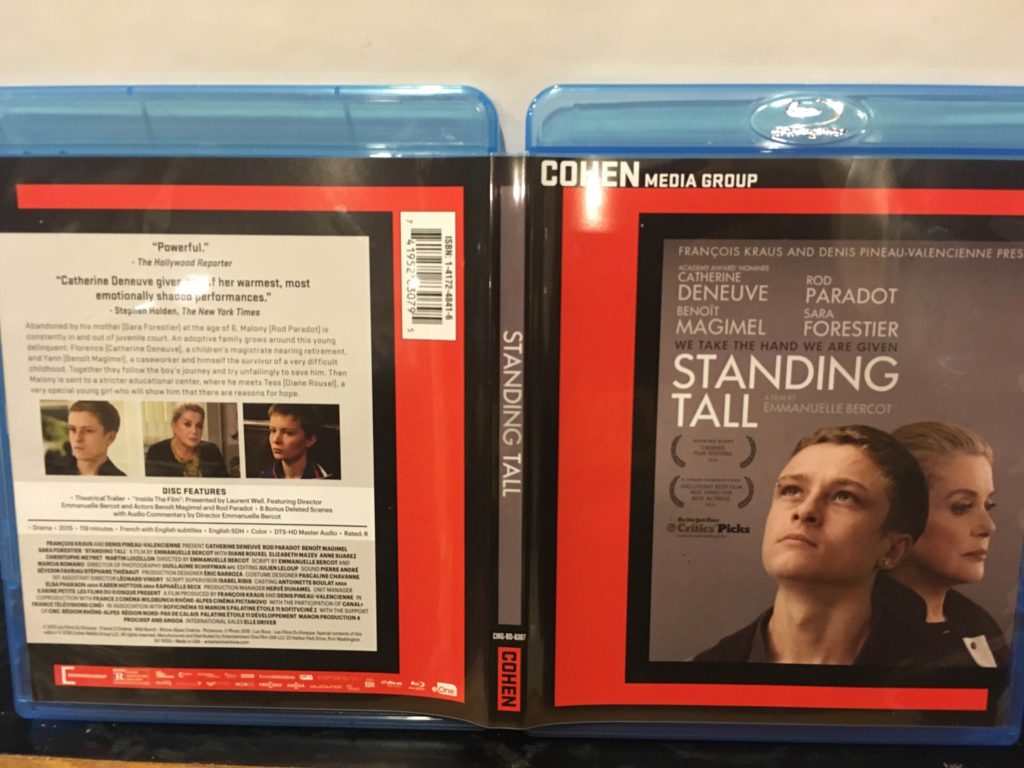 Onto the features, of which there are 3: 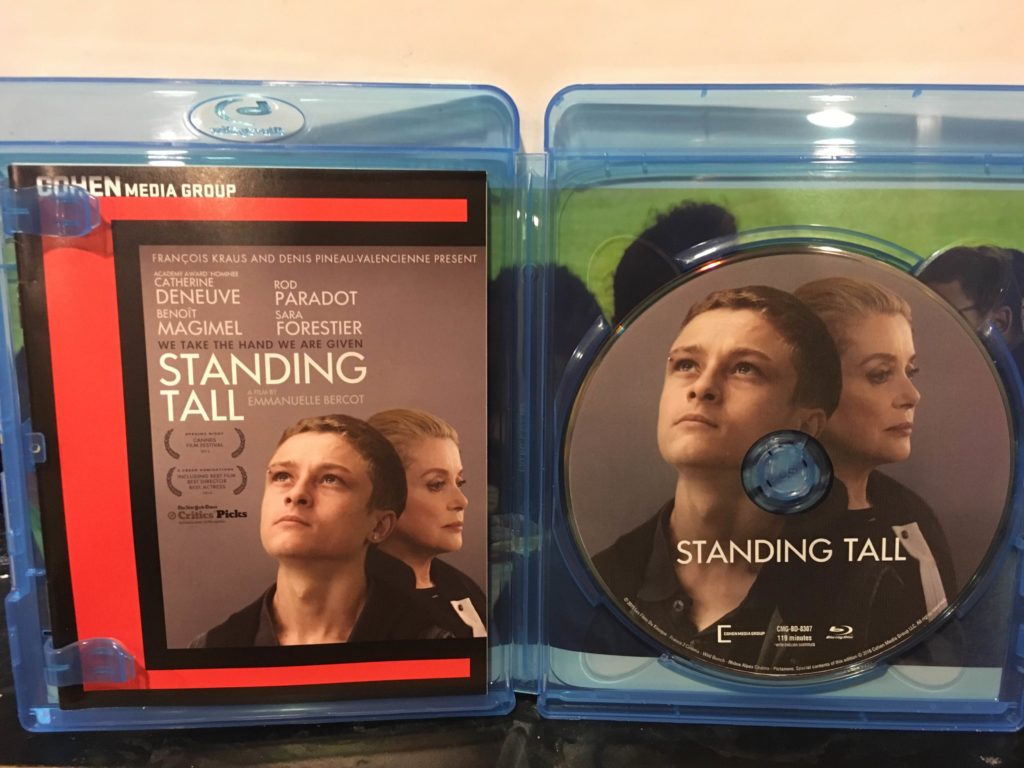 Inside the Film: Presented by Laurent Weil – a French publicity piece, in which the making of the film is detailed with stories from some of the film’s actors, as well as the director, which runs twenty minutes in length. Presented with English subtitles.

Deleted Scenes – nearly 30 minutes of deleted scenes from the film, 8 in total, with commentary by director Emmanuelle Bercot, in which she breaks down the scenes, why they were cut, and what goes on in each scene. 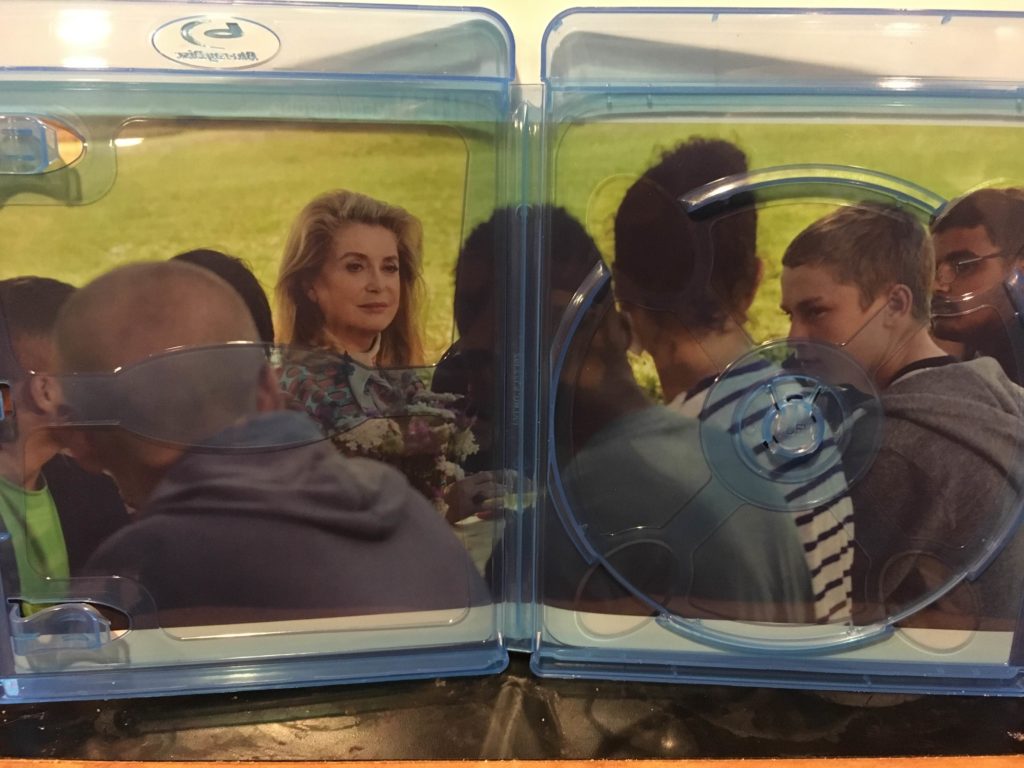 Standing Tall features excellent packaging, and some decent, if not small in number extras. 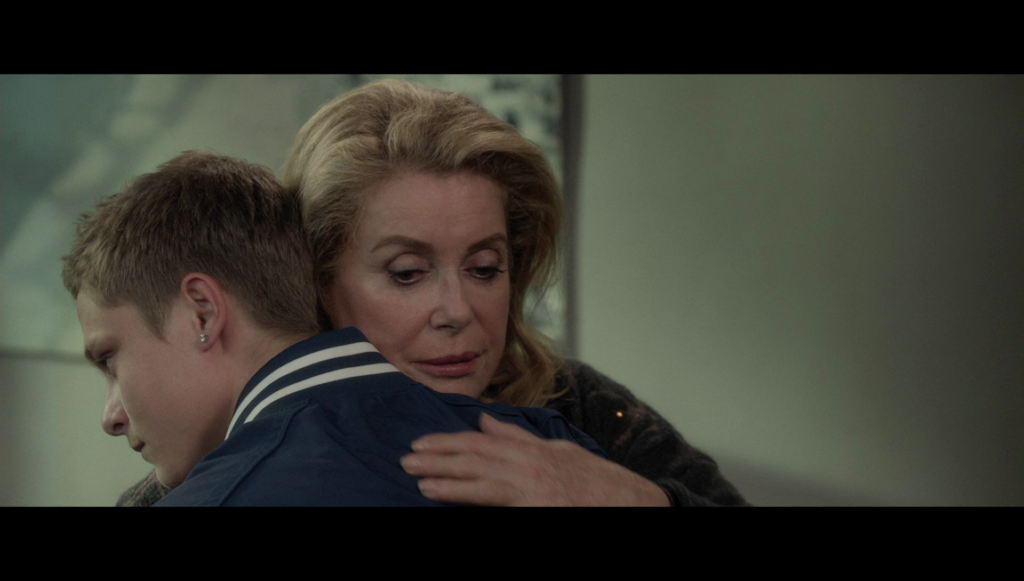 Standing Tall is a well acted, convincing story about a boy who suffers from some severe emotion issues, and instead of acquiring help from the state, is passed from one person to the next in a tragic game of hot “how do we fix kids” potato. It suffers from a strange change in tone as it reaches its finale, which lessens the impact of the film, but is otherwise a compelling, intense drama. Cohen Media Group’s presentation on home video is faithful to the film’s digital origins, with a decent video transfer, and a moderately troubled audio presentation. It features excellent packaging, with a small selection of decent special features. If you can get past the film’s troubling third act, this is a decent Blu-ray release from Cohen.