Animated films have always been hit or miss for me. On one hand, you have films that appeal to a broad audience not limited to children, and present characters and messages that are fascinating to the younger generation, but are also still applicable to the parents taking their kids to the movies. On the other hand, you have rushed cash-grabs that only aim to entertain children and have very little lasting value, especially for older viewers. Obviously not all animated movies fit into these two categories, but it’s always refreshing to see one in my initial grouping. Spirited Away achieves relevance and charm through its surprisingly penetrating message, beautiful animation, and lovable characters, to the point of ‘masterpiece’ certification.

Spirited Away, written and directed by Hayao Miyazaki (well-known for his work in Japanese animation) tells the story of a young girl, Chihiro, who is moving with her parents to a new home. What begins as an innocent detour through a seemingly abandoned amusement park turns into a frantic journey for Chihiro to rescue her parents in a world inhabited by spirits and magical creatures. 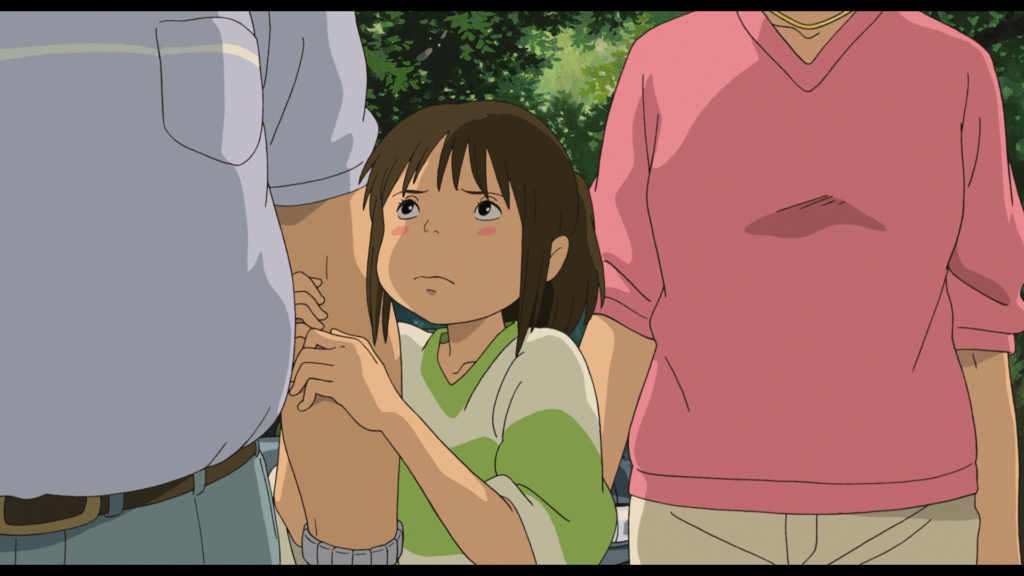 I feel what sets Spirited Away from other animated features is its confidence in the world it creates, as well as the emphasis it has on character development. The main setting of the film, known as the “spirit world,” is mysterious, and while some aspects of the world and its inhabitants are explained to an extent, there is still a great deal left up to speculation. Miyazaki wasn’t afraid to present such strange and unorthodox imagery and environments; in a way, the world speaks for itself, and actually feels quite full and developed despite the lack of complete explanation. It feels more real that way. 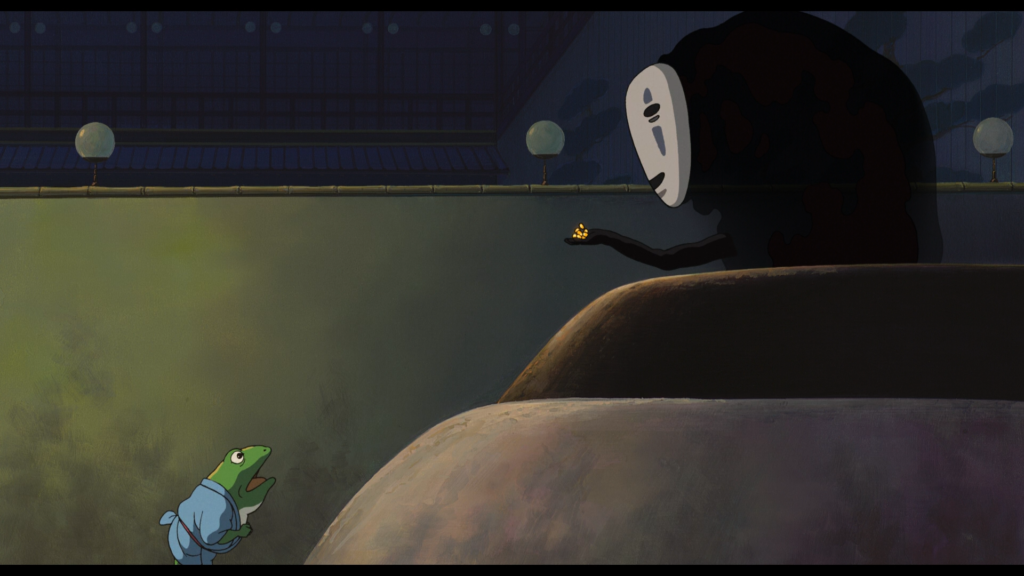 What I appreciated most about the film, aside from the dazzling universe, is the complexity of the characters featured. We can clearly see the confusion, terror, and curiosity blended brilliantly in Chihiro’s personality, and also how despite these strong emotions, she is able to show almost unflinching kindness. We also see how this kindness slowly influences the other characters of the film, for example, the transformation of No-Face from a spirit with less-than-honorable intentions to a much more innocent and docile friend of Chihiro. I never felt that any particular character in this film was “bad for the sake of being bad” or “good for the sake of being good,” but rather, everyone had their own backstory and motivations that caused them to perform the actions they do.

On a more surface level, Spirited Away provides plenty of visual splendor and personality charm to appease younger audiences, but also a great deal of depth to be analyzed and appreciated by older viewers. This film is truly a work of art.

I honestly don’t have much to say about the video quality of this release; it’s exactly what it should be. Crisp and vibrant, detailed and free of noise, we’re talking reference-quality animation and overall very definite picture fidelity. Watching the film, I felt the presentation was perfection, and lacked anything to distract from the brilliant fantasy taking place. 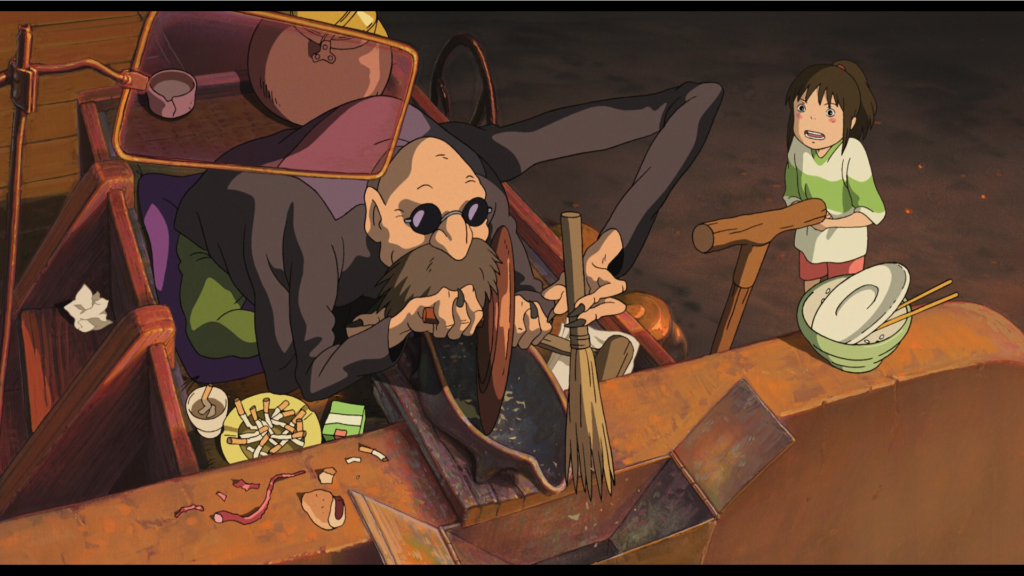 As with the video, there’s not much I can nitpick at in the film’s audio presentation. Dialogue for both the Japanese and English DTS-HD 5.1 tracks is impeccably clear, and I also must say that I really appreciated the English dub. I had a roommate in my freshman year of college that swore by subbed anime instead of dubbed, and to an extent I do agree in a “keep the original state of the show” sense. However, the English dub of Spirited Away is well-acted and doesn’t sound bland or forced like some of the dubbed anime I’ve seen. The soundtrack of the film is incredibly well-integrated, and creates a deep sense of immersion that completes the film’s overall fantasy. A lack of noise and a pleasing sound mix earn this film a perfect score in terms of audio.

Nothing about the packaging for this release is particularly special, though the cover art is rather delightful. Not overly generic or vague, but simple with a hint of mystery. The back of the case is standard Blu-ray fare, giving a brief description of the film and it’s impact on the industry. This release includes a Blu-ray disc as well as a DVD version of the film, and an insert containing a code for Disney Rewards. Unfortunately there is no digital copy bundled with the film. There was a slipcover with the first print run, but Ghibli slipcovers are notoriously difficult to find, and my copy did not include one. A quick eBay search yielded copies with slipcovers for sale at around $35. It’s an available option, but a more expensive one. 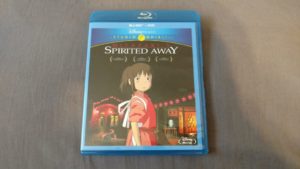 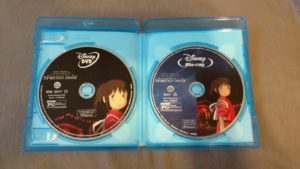 As far as special features go, there are some, but nothing spectacular. You get an interesting Japanese storyboard edition of the film, a short detailing of the film’s art and design, a brief commentary regarding the English dub of the film, and a TV special featuring a tour of Studio Ghibli and interviews detailing some of the production for the film. There is also an introduction to the film by John Lasseter, and a small collection of Japanese trailers and TV spots. I guess you could call the assortment of special features “adequate,” but I’d imagine they’ll leave hardcore Ghibli fans and collectors a bit empty handed. 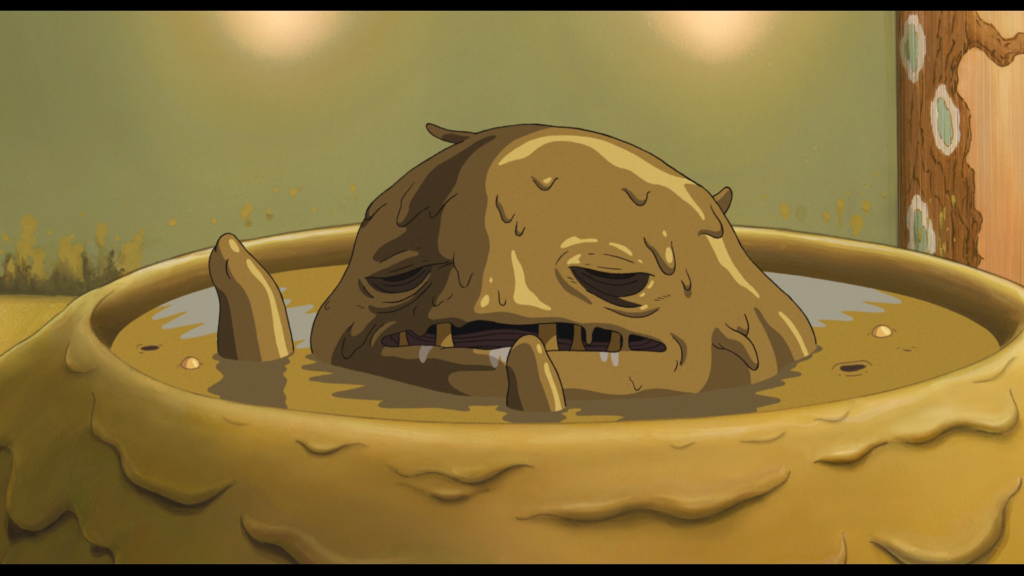 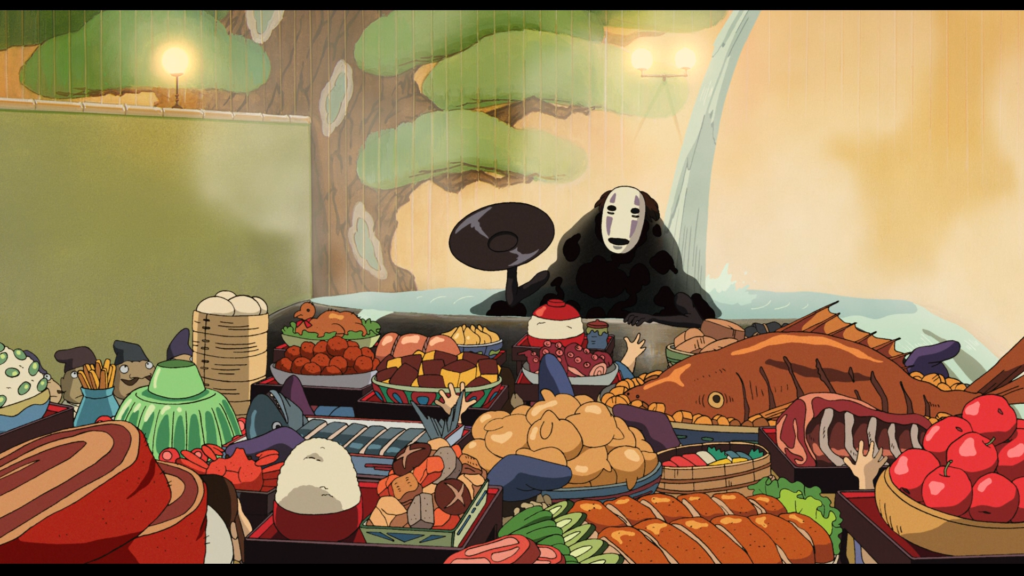 Spirited Away is one of those films that just exudes childhood wonder and creative excellence. At this point there is no arguing it’s powerful impact on the animation and film industry, and it’s a film that will cherished by those young and old for decades to come. While the film (and it’s transfer) are spectacular, this particular release could use a bit more in terms of extras. Die-hard fans will likely want to wait for a proper collector’s edition, or perhaps would be more interested in the Japanese digibook release. This standard edition can be picked up from Amazon.