The NBA was in its heyday in the mid-90s, with stars like Charles Barkley, Patrick Ewing, Larry Johnson, Karl Malone, John Stockton, Shaquille O’Neal, and of course, Michael Jordan. Jordan was fresh off his first NBA retirement and attempt at a baseball career (or a year’s suspension for a gambling problem, depending on who you believe) and upon his return to the league he had the chance to participate in Space Jam with the members of the Looney Tunes, Bill Murray, and his NBA counterparts. The basic story follows an alternate timeline, where Jordan’s retirement was spent training with the “Tune Squad” basketball team in an effort to defeat the evil alien “Monstars” in a game of hoops. The Monstars steal the talent of NBA players to enhance their skill set, and they face off in a comical game of basketball with all of the classic Looney Tunes characters and Jordan. If the Tune Squad loses, they would be sent to the Monstars’ alien planet, where they would be a new form of entertainment for their galactic amusement park. If you haven’t seen the movie before, I won’t spoil the ending, but also, you should get out from under that rock. 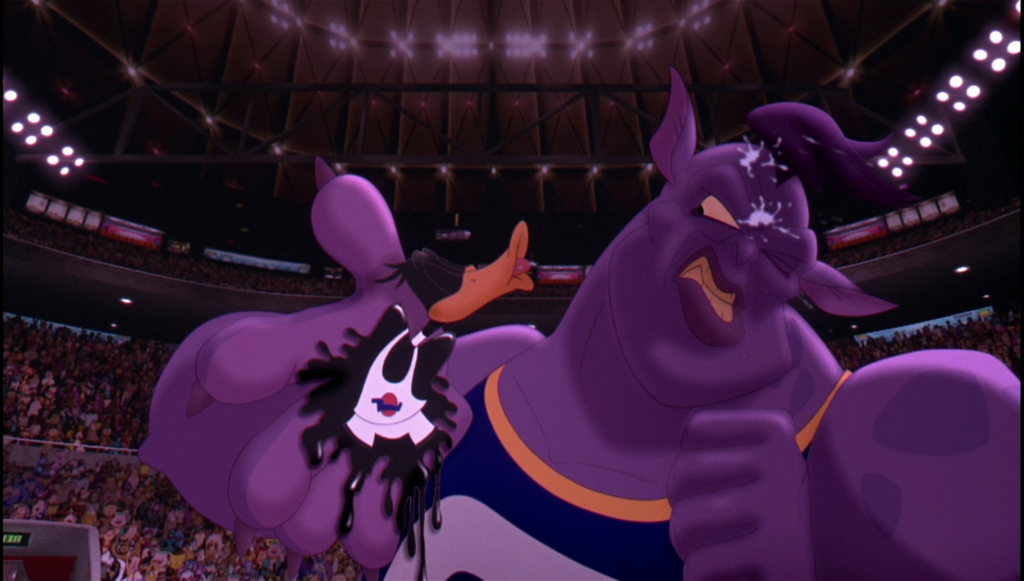 Space Jam is one of my favorite movies ever. Sure, it’s not a perfect movie, and maybe the script could be better and Jordan could be less of a stiff in front of a green screen, but it is just so much fun. The Looney Tunes are at their best, and for fans of NBA Basketball, there are constant cameos. The early scenes featuring the NBA stars on Earth after they lose their talents are permanently burned into my brain, and they are some of the funniest moments of the movie. The soundtrack is an essential part of the 90s, with so many major hits that you could play all day long. As long as I live, I will remember the lyrics:

Everybody get up it’s time to slam now
We got a real jam goin’ down
Welcome to the Space Jam
Here’s your chance, do your dance at the Space Jam 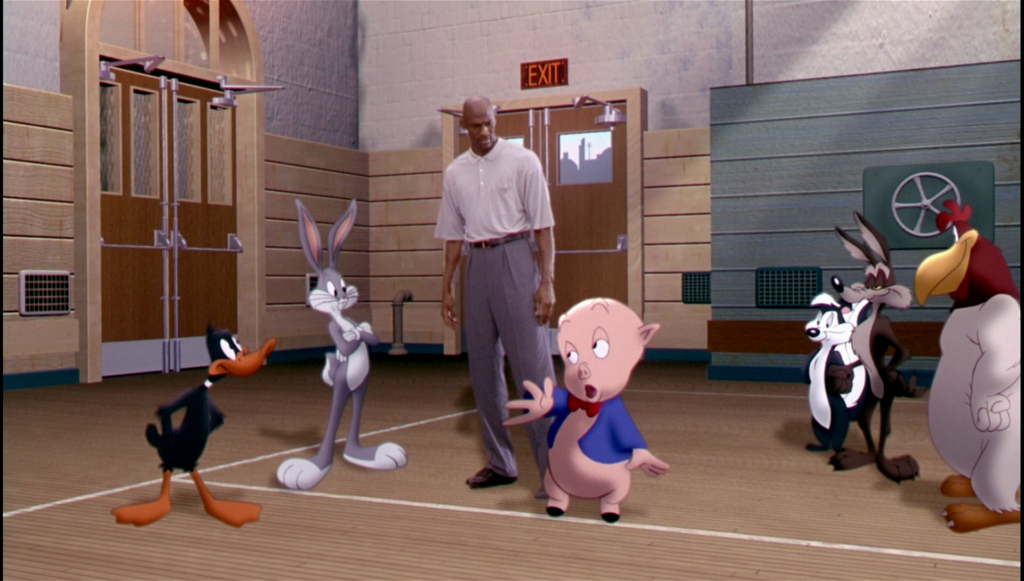 If you have little kids, cousins, or siblings, Space Jam is the perfect family movie, with enough for adults and children alike. If you don’t have kids, but you yearn for that nostalgic feeling, this is like a shot of the 90s straight into your veins. The clothes, music, NBA players, Bill Murray; Space Jam has it all. I will forever consider it one of my favorite animated movies, and it certainly had a lot to do with my love for the game of basketball. I highly recommend it, as each viewing offers something new. If you haven’t seen it in a while, pop it in, sit back, and relax – you won’t be disappointed.

The animated portions of Space Jam look great, but the mixture of animation and real life footage can look pretty dated. The visual quality for the majority of the film is pretty solid, and colors are vibrant. The animated sequences are obviously much brighter and easier on the eyes, so it is a good thing they dominate the majority of the film. The CGI is decent enough for a film that is twenty years old, and I have no complaints about the film looking to cheesy or too obviously green-screened. Of course, this is not going to look like a high-end Disney or Pixar film, but for the time period, this was pretty remarkable. Overall, the visuals are good enough, and let’s face it, you aren’t here for the picture quality; you are here for the nostalgia. For those who grabbed the 20th Anniversary Steelbook, this is the same transfer as the previous standard release.

The DTS-HD Master Audio 5.1 track included with Space Jam is the same audio track that was included on the standard edition. The audio is excellent; from Fly Like An Eagle to the amazing theme song, the titular Space Jam by Quad City DJs, the music boomed through my SVS Prime Towers. The 5.1 track provides a nice immersive experience, with plenty going on around all five channels. Dialogue is crystal clear, even for some of the harder to understand characters; I’m looking at you Porky. The scenes in the arena sound realistic, creating an authentic feeling of a massive stadium with all the right echoes, squeaky shoes, and music. I was very pleased with the audio, and it is much better than the visual portion of the presentation. I recommend a full 5.1 system for this release, or you will miss some of the finer points of the audio track. 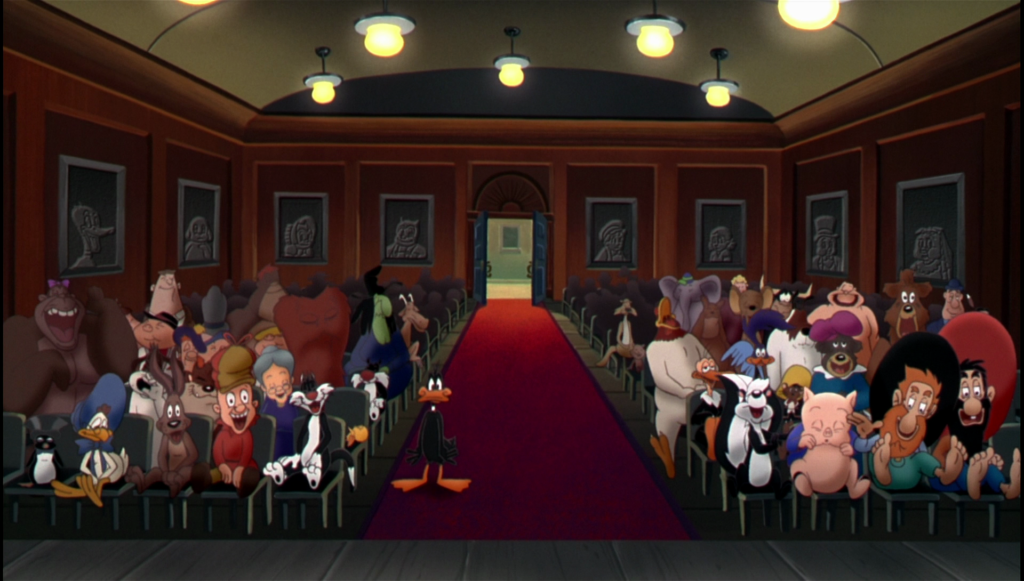 Space Jam is currently available in two forms on Blu-ray. The first is a standard, one disc Blu-ray, with the theatrical artwork. It is pretty barebones, and did not feature a digital copy. 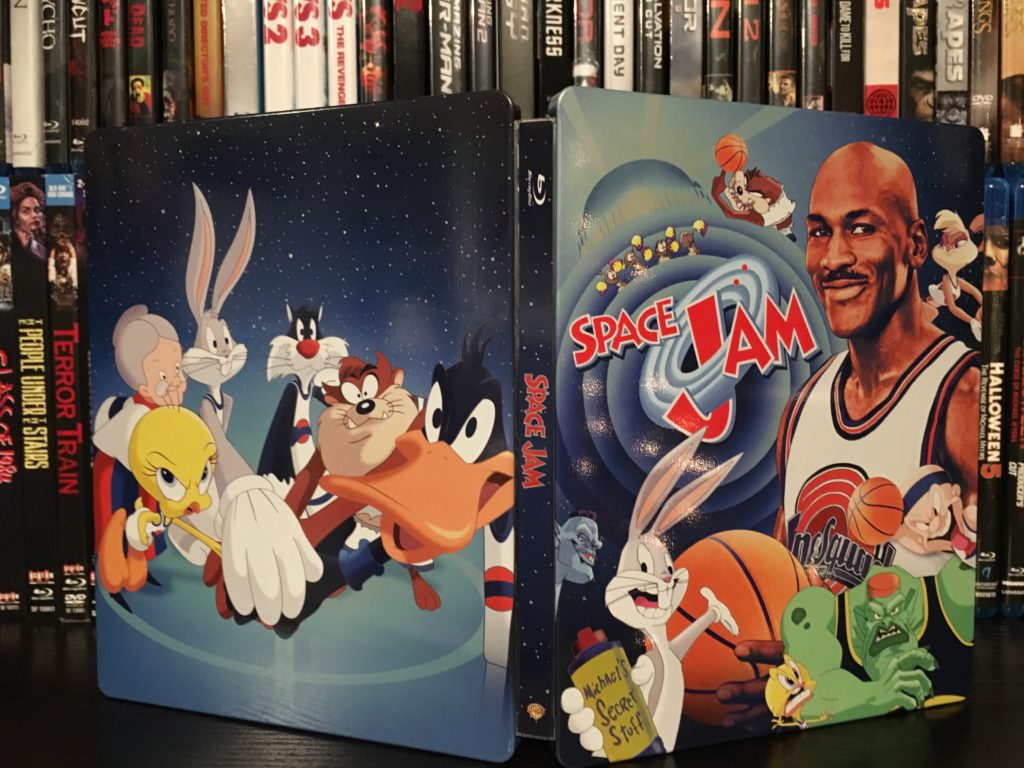 The new release of Space Jam (and the release which prompted this review) is the 20th Anniversary Steelbook packaging. The new Steelbook features some excellent glossy cover art, on both sides, and really great interior artwork as well. This new release also comes with a DVD copy and a digital copy, but the special features and audio/visual presentation are ported over from the earlier release. I much prefer the Steelbook to the standard edition (I own both), as the Steelbook artwork is stunning and easy to display, and the addition of the digital copy is great for those who may be buying Space Jam for the first time and want to share it with younger family members. 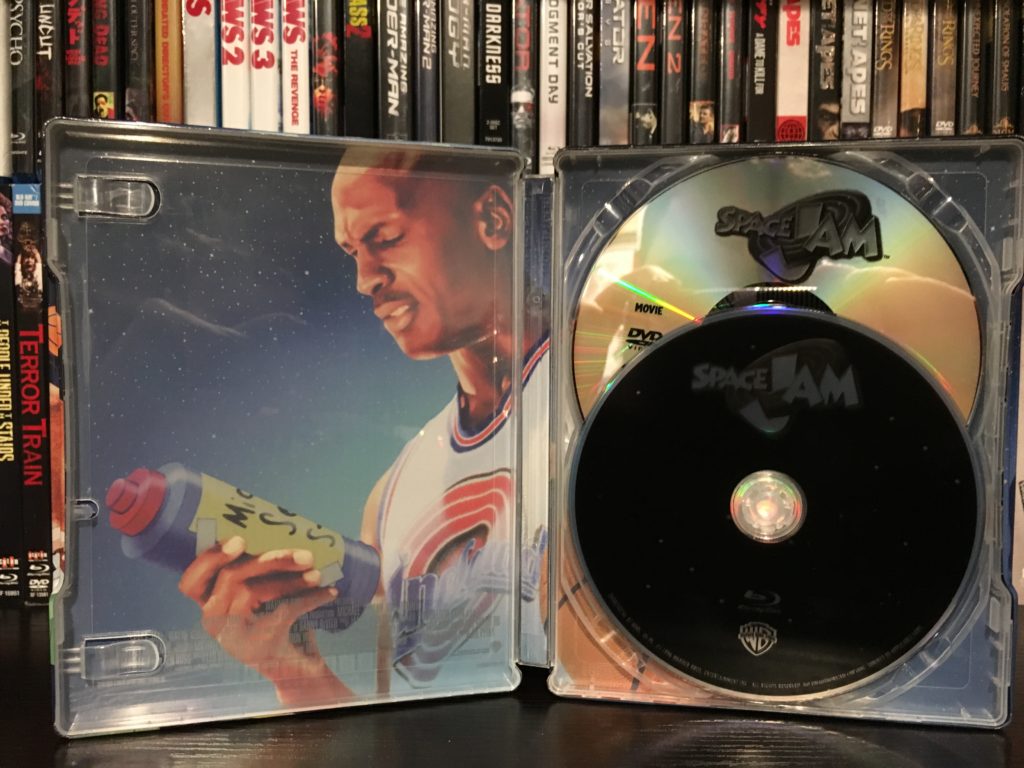 As for special features, as previously stated, they are the same on both Blu-ray releases, and are not very extensive. There is an audio commentary that features Bugs Bunny, Daffy Duck, Director Joe Pytka, and a couple of the voice actors. It is goofy, and not very informative, but it can be fun for fans. There are also two music videos, one for Fly Like An Eagle and another for Hit ‘Em High, as well as a 20 minute behind the scenes feature and the theatrical trailer. I expected more from a 20th Anniversary Release, but this is as good as it gets right now. 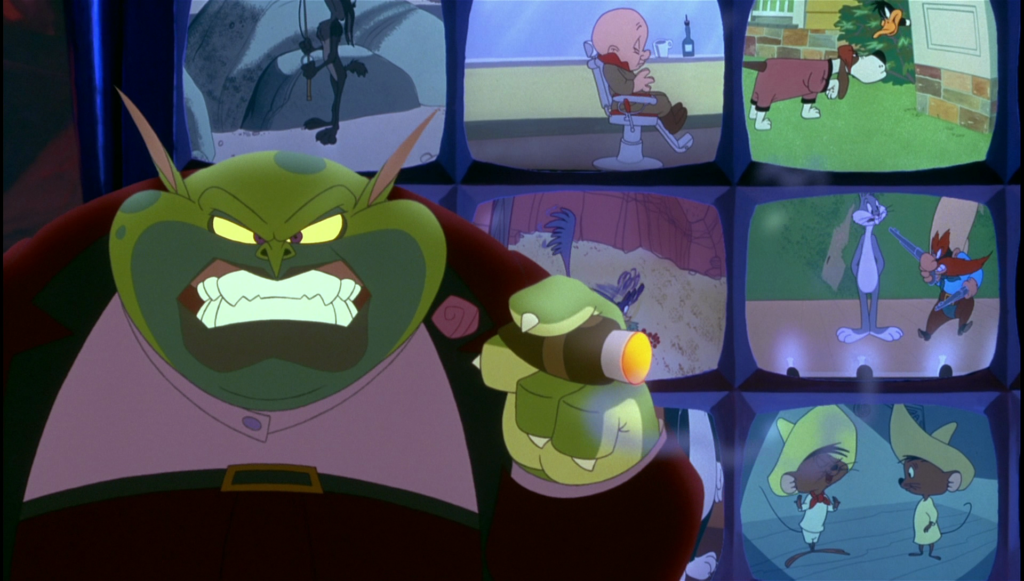