Smallfoot is a 2018 American 3D computer-animated musical comedy-adventure film that was produced by the Warner Animation Group.  Based on the book titled Yeti Tracks by Sergio Pablos, the film was co-written and directed by Karen Kirkpatrick, and stars the voices of Channing Tatum, James Corden, Zendaya, Common, LeBron James, Gina Rodriguez, Danny DeVito, Yara Shahidi, Ely Henry, and Jimmy Tatro.  The plot follows a group of Yeti who’ve come across a human, with each species thinking that the other was just a myth.

The Yetis live in on the top of a mountain in the Himalayas, Nepal, above the clouds and hidden away from plain sight.  Migo is a yeti who abides by the law of the ancient stories that are held by the Stonekeeper.  Migo’s father, Dorgle, projects himself through the air each morning to hit a gong with his head, believing that this allows the sun to rise.  While learning how to ring the gong, Migo is distracted by the Stonekeeper’s daughter, Meechee, whom he loves, and misses the gong, landing outside of the village.

Smallfoot was theatrically released in the United States on September 28, 2018 by Warner Bros. Pictures.  It received a moderately positive reception from critics and has grossed over $213 million worldwide.

Smallfoot is an old-age tale about the long-time fabled Sasquatch, but significantly simmered down to direct its storyline and underlying lessons at the younger audiences.  Overall, giving audiences the same-old good feeling that you would expect to resonate out of a children’s movie, there are a good number of jokes and lessons that I personally feel would resonate with the older viewers.  As my wife and I watched along, we found ourselves enjoying the movie, had a few laughs at the comedic gestures, and can definitely agree that this was a solid kids movie.

Presented in a 2.40:1 presentation at 1080p, Smallfoot really offers an exceptionally bright and vivid presentation that stands out on the oldest of HD television sets.  Checking it out both on my main television in my living room and finishing it off on my older television in my bedroom, the overall experience was clean, clear, and distinct enough to make sure that everything could be seen and understood.  The attention to detail in the animation was sharp, and you can really gain an understanding for the amount of work and effort that was put in by the animation team.  There weren’t any issues seeing or visually understanding what was happening on either set, and the overall experience was top notch.

Bundled with an English DTS-HD Master Audio 5.1 mix, the Blu-ray release of Smallfoot tries to pack an all-out immersive audio experience for its viewers.  While it doesn’t make use of the surround channels of the spectrum, the amount of power that comes through those front and rear channels are effective enough, and with the transitions from channel to channel were effective enough to make sure that it felt like we were sitting right there in the middle of everything.  The dialogue is spoken cleanly, ensuring that the characters could be heard and understood without issue, and the accompanying musical score for the movie were right on par with making sure that the entire experience for children is a fun one.

The Blu-ray release of Smallfoot comes packaged in your standard two-disc Blu-ray amaray case.  Within that case is the standard Blu-ray copy of the movie as well as the standard DVD copy.  Neither of the discs feature any artwork that’s related to the movie outside of the standard release text and generic solid colored background.  There is a digital copy redemption pamphlet that’s been included for the various streaming platforms as well as a slipcover that’s been made available in the original pressing of the release that features the same artwork that’s been included on the case. 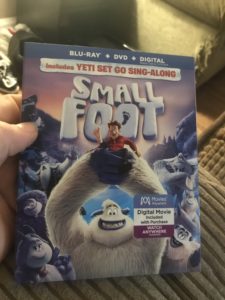 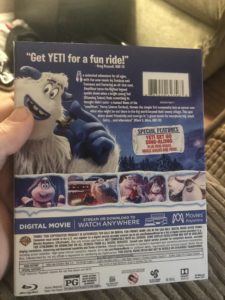 There’s a good number of special features that’s been included with Smallfoot.  The content directed at being more of some extra activities for children so they can explore a little more with the characters that they may have liked in watching this movie.  There isn’t a whole lot in terms of any kind of exploration of the film or much in terms of behind the scenes work, but that’s a rare commodity in most recent children’s movies, so I can really understand why the features included were included.  Included with this release is:

Overall, my wife and I thoroughly enjoyed Smallfoot as it provides a solid storyline with a positive message that will hit home with a lot of its viewers, and is packed with a lot of fun to be had with kids alike as they watch along.  The visual and audio presentation of the Blu-ray release was nicely done, with crystal clear animation and a solid audio track, despite it not being as immersive as a 7.1 mix.  The included special features were really nice and offer a lot of fun that could be had by many children who watch this release with their parents.  If you’re considering this release for your personal collection, I’d definitely recommend picking it up if you too have kids.  Smallfoot came out on Blu-ray and DVD yesterday.