Matt(Cosnett) decides to bring his girlfriend, Lisa(Bryne) to his parents summer home in Los Angelos with two of their friends. His brother, Kyle(Stenhouse) gets dragged along. Strange events start to plague the flight as it goes along on its journey. The group discover to their horror that they cannot land due to some catastrophe on the ground.

The film has some very strong things going for it. The acting is good, no major issues with characters being awkward or feeling out of place. The most recognizable actors are Scarlett Bryne from her work in Falling Skies and as one of the more noticeable background characters in the Harry Potter film series. The other two Rick Cosnett and Gavin Stenhouse are recognizable to Flash and Black Mirror fans respectively.

The overall plot of the film is solid, but has some issues. Most of the issues revolve around things being off. Like one character is shot and in what feels like is less then an hour the wound is already infected and needs surgery. As a general movie goer this scene just feels wrong, like it wouldn’t happen that quickly. Or the fact the character who had been shot was walking around fine and then in a moment was on death’s door due to the infection. There are a few scenes like this where it just seems wrong. The main plot of the film works with the idea of them not being able to land due to a disaster, but subplots take away from that idea. The stowaway plot line just seems to fall flat and inflate the film to be a little longer. A slightly better subplot, although a little cringe inducing, is the triangle romance. Lisa(Bryne) is dating Matt(Cosnett), but she used to date Kyle(Stenhouse) Matt’s brother and these feelings come out during the traumatic flight.

The film takes place mostly in the cabin of the plane, with some shots of the outside. The plane’s cabin often feels small when on screen, but they also treat as much bigger then it is. The CGI used is acceptable. Nothing spectacular, but also nothing extremely bad.

Some extra thoughts: Creepy bells play on the TV implying a supernatural end times, but turns out more earthly reason. Said earthly reason of end times is given a decent explanation, much more then expected. Character named Odin, seems to have the name just to have a wacky name and for a joke at the beginning of the film. A joke that seems like a bunch of friends would have had by now. Everyone extremely unconcerned with a plane losing power while in the air. No one ties up the stowaway, who had a gun and shot one of the passengers. Weird German Shepard story in the beginning of the film, feels out of place but was still fun.

The audio in the film is solid. No bad sound effects or annoying background music, but the audio doesn’t stand out. It is normal and fine, which is a good thing. 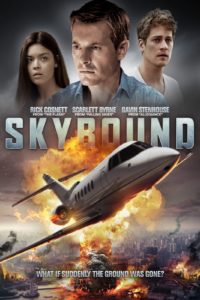 Skybound was released this past November on VOD and DVD by SP Releasing.

The film is about as good as a made for TV movie. Little better with actors and overall plot, but a little haphazard in execution.