Sin City: A Dame To Kill For is one of the best Blu Rays I have ever watched, regardless of any negative critiques it has received. With a 3D version included in standard packaging, this is a must own for any collector or home theater fanatic.

For fans of the original Sin City, the sequel, A Dame To Kill For, was highly anticipated. Unfortunately, the fans of the first movie were not enough to avoid a box office disaster. A Dame To Kill For opened 9 years after the original, and so much of the fanfare surrounding the first movie was long gone by the time its sequel hit theaters, resulting in a worldwide total over just under $40 million. This is a far cry from Sin City’s huge 2005 theatrical run, where it made nearly $160 million worldwide. However, box office totals have no affect on the quality of a Blu Ray release, and in some ways low ticket sales can mean home viewers will get more when the Blu Ray is released.

For example, when A Dame To Kill For was released on Blu Ray, it came in a three disc package featuring the 3D version, the standard Blu Ray, and a DVD. Typically, studios release the 3D version of their films separately and charge $3-$4 more for 3D. When a 3D movie does not perform well in theaters (think Dredd, Immortals, or Prometheus) the 3D version can be coupled with the standard Blu Ray, which is a very good deal for home viewers with 3D capabilities. I was able to grab my copy for only $10 at Target, and while the price is back up to around $20 right now even at that price it would be worth getting, especially for fans of 3D. 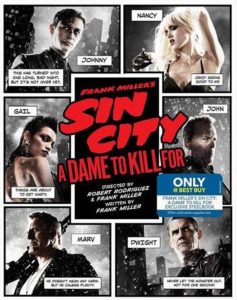 The only Blu Ray exclusive for A Dame To Kill For was a steelbook from Best Buy, found here, although it looks like it will be tough to find, with shipping unavailable. The version which I own can be found here, and is the suggested version for the average fan. If you are a Sin City super fan, by all means pay extra for the steelbook, but I do not believe it is worth the extra money for the average home viewer.

Sin City: A Dame To Kill For is the best looking Blu Ray I have watched all year. Now that that’s out of the way, let’s explore why. First off, Sin City is meant to look spectacular and its stylistic form of film is what sets it apart from any other movie. There have been copycats, but other than 300 none have come close to matching this style of filmmaking. The entire movie is filmed in black and white, with very limited color in certain scenes and for certain characters. However, black and white picture has never looked so vibrant. The blacks, grays, muted whites, and bright whites mixed together into one cohesive image look stunning on Blu Ray, and it is highly recommended that you watch this movie with the lights dimmed or completely off so that you can feel the full effect of this style. 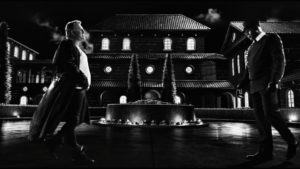 There is absolutely nothing to complain about with this Blu Ray release, but there are a few things to be mindful of. First off, the aspect ratio was kept at its original theatrical ratio of 1.85:1. This means that there will be a very slim black bar on the top and bottom of your widescreen HDTV, but this is normal and you should not zoom in on the picture or alter it in any way. For those of you with projectors, the black bars could be either wider or non-existent depending on settings and your screen’s ratio, but I would still recommend keeping the film in its original ratio so that none of the amazing picture quality is lost. Secondly, if you are watching the 2D version of the film there are a few scenes, especially early on, where you can tell they were intended to be seen in 3D. In these scenes, the gimmicky look you can get from 2D movies made for 3D conversions is visible, but only if you are really paying attention. Otherwise, this is an amazing Blu Ray. I do not like to call anything perfect, but this is as close as I have seen to perfect from films released this past year.

There is less to talk about with the audio from this release, as it is your standard 5.1 DTS-HD Master Audio that is very typical of most home releases these days. I would have liked to see a 7.1 mix from A Dame To Kill For as it certainly would have benefited from such a total surround sound experience, but the 5.1 mix does an excellent job as well. Dialogue is clear and well mixed with the louder, more violent scenes, so there is little volume adjusting to be done with this film, which is always a plus. The rear speakers are in full use, as the sounds of Sin City surround you. Every gunshot, shattered window, and exaggerated punch that Sin City is so well known for was produced brilliantly through my speakers, and as the filmmakers intended, it is truly like stepping into a comic book or graphic novel. It is a near perfect audio track, although the real winner with this film is its presentation and picture quality. Am I as excited about the audio as I am with the picture with A Dame To Kill For? No, but it does its job well and I have no complaints.

Surprisingly, even with a three disc combo pack featuring a DVD, 2D Blu Ray, and 3D Blu Ray, Anchor Bay (the studio who released this Blu Ray) provides a very good amount of extras. If you happen to own the Target Exclusive, I do believe there are more extras available on their own disc, but I do not have that version and thus am going to provide the typical extras that come with all other releases.

A Dame To Kill For comes with four short extras, all in HD, and also features the Theatrical Trailer for the original Sin City, although there is no trailer for the sequel. Curious, but after the box office flop maybe the filmmakers wanted to relive the glory of the original and remind viewers of just how good that first effort was!

The extras are as follows:

High-Speed Green Screen – A fast forwarded 16 minute presentation of the film, before digital effects and CGI were added in post-production. It is an interesting glimpse into how these movies are made, especially in an era of film dominated by CGI and green screen effects.

Character Profiles – 14 minutes of interviews with the cast speaking about their characters. It is very basic, but interesting for fans.

Makeup Effects – 7 minutes with Robert Rodriguez, the Director, and Greg Nicotero, who did the makeup for this film and also works extensively on The Walking Dead and has worked on Evil Dead and many other makeup heavy horror movies since the 1980s. It is worth the look for fans of Nicotero’s work.

Stunts – A quick 6 minute look into the stunts for the movie with Rodriguez and the stunt coordinator.

Overall, they are all worth a look, with the highlights being the Green Screen Version, which is very cool for students of film, and the Makeup Effects short with Nicotero. I wish there was a bit more, and maybe something featuring Frank Miller, but it is still more than many releases are coming with these days.

FINAL VERDICT: Sin City: A Dame To Kill For is one of those movies which you have to own if you are a home theater enthusiast or movie collector. It is simply one of the best experiences you will ever have with your home theater. Ignore the critical reviews, and pop this one on the screen and enjoy the visuals. You will not be disappointed.