Mike Judge is a bit of an acquired taste. Sometimes his work falls into a very subtle style of satire, such as his long running animated comedy King of the Hill. The show, which ran from 1997 to 2010, took a naturalistic spin on the animated comedy, favoring humor through the lens of a middle class family that lives in a small town in Texas. The show was funny, sad, and surprisingly easy to relate to. 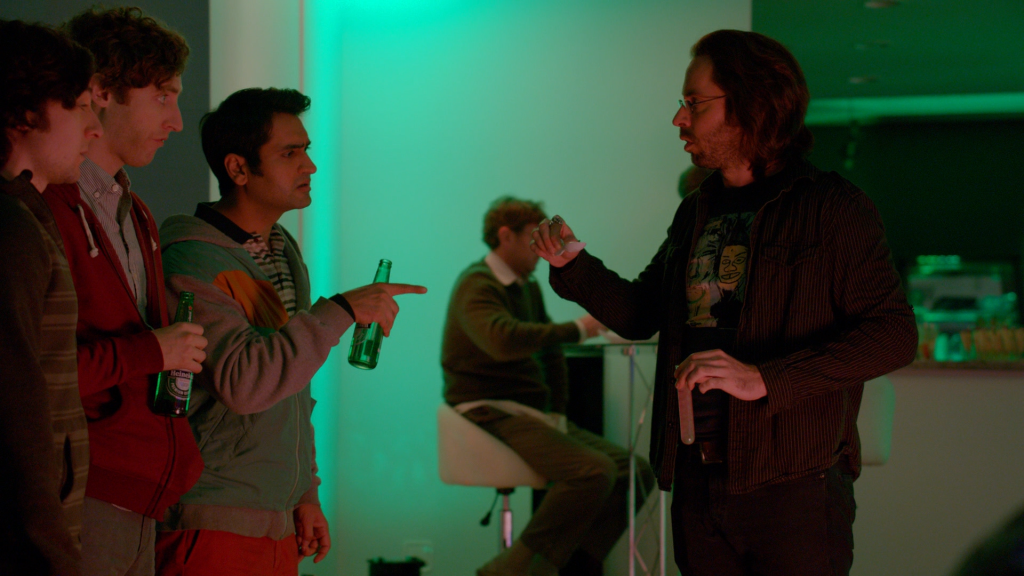 On the other hand, Mike Judge also creates these hyper realistic, over the top forms of satire, such as the exaggerated comedies Office Space and Idiocracy, which paint a surreal vision of both the work place, and in a surprise twist for Judge and crew, the future. His most well-known piece of work in this category is of course the smash MTV hit, Beavis and Butthead. His first major success, he chose to create a pair of over exaggerated 90s teenagers, fueled with an overwhelming sense of apathy and destruction, they were an extreme parody of the day’s youth.

Where does his most recent concoction, Silicon Valley fall? Somewhere in the middle of those two realms.

Silicon Valley is a satirical comedy program, set in the heart of the San Fransisco Bay Area. Produced by HBO, the 8 episode first season follows a group of man-children programmers, as they fumble their way through trying to get a tech startup company off the ground. The series focuses on a group of socially inept, hostile twenty-somethings that all live under the same roof, as they train-wreck their way into becoming a successful business. The cast of characters, led by actors such as T.J. Miller and Richard Hendricks, must band together to stave off rival companies and prove their worth at the industry’s largest tech competition.

The show’s plot is fairly loose, focusing more on character interactions to fill out the half hour episodes. Most of the episodes are spent on the various side characters who come and go, such as a genius 14 year old programmer, or a shady graffiti artist, and how they are haphazardly injected into the process of developing Pied Piper, the app which is to be entered into the competition. The main cast of characters are constantly at each other’s throats, insulting one another, and generally doing everything they can to distract themselves. When the show isn’t focusing on conflict, it takes a more depreciative look at the tech industry, portraying many of the show’s main characters to be socially inept and generally uncomfortable in their everyday lives, bringing a surprisingly human aspect to the otherwise cartoonish characters on screen. 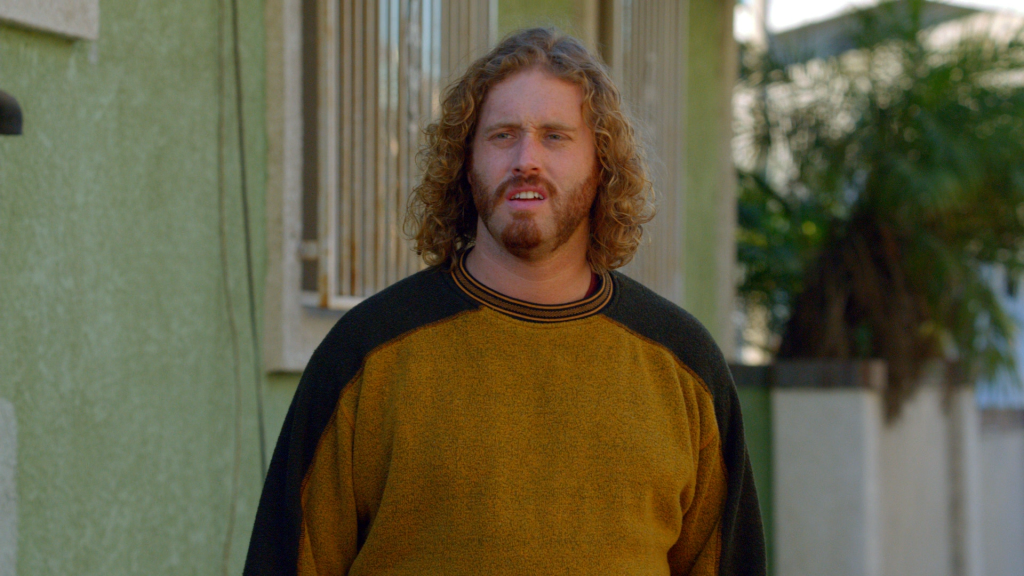 Silicon Valley is well written, tightly edited, brilliantly paced and incredibly funny. The show’s excellent casting helps lead the more often than not deplorable, self-loathing characters on screen to bombastic highs, and devastating lows. It sits on that line between hyper-realistic Mike Judge and subtle satire Mike Judge, making for one of his most satisfying television outings yet. Season One of HBO’s Silicon Valley comes with a big recommendation, especially since Season Two is about to drop later this month on Blu Ray.

There is surprisingly little information out there about the means through which Silicon Valley was shot, and produced for HDTV broadcast on HBO, or for Blu-ray. The series was acquired digitally, and most likely finished using a digital intermediate process. The series is presented in 1080p resolution with an aspect ratio of 1.78:1. 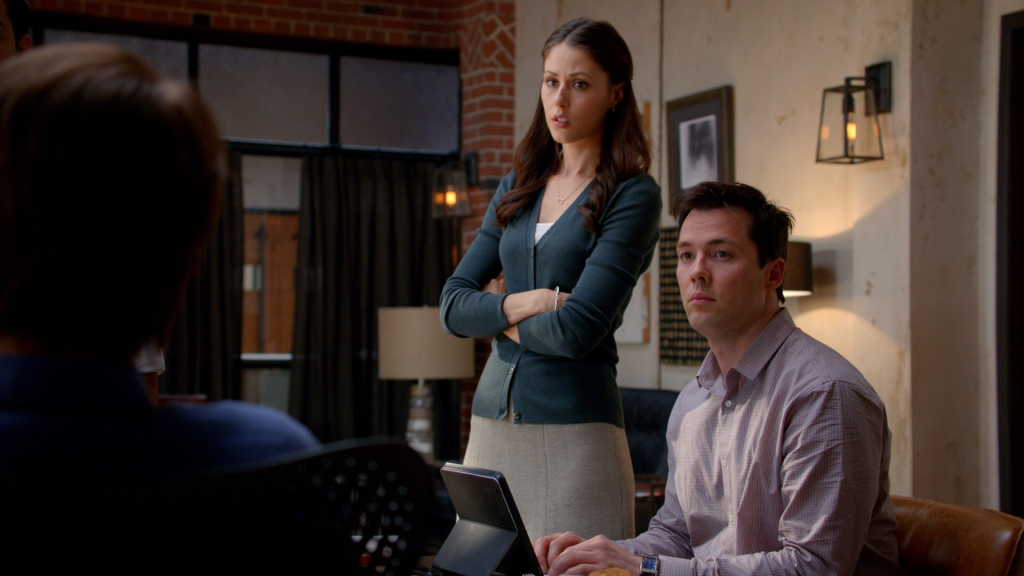 Silicon Valley is not a particularly mind blowing experience in 1080p. More often than not, the 8 episodes are uniformly caked in digital video noise, which doesn’t quite look like film grain, but feels kind of weirdly sharp and unnatural. The series is colorful, and there is a moderate amount of detail to go around. I get the feeling that Silicon Valley is one of those shows where it isn’t really about the image quality, but the writing and performances on screen, so it comes to no surprise that the video presentation is merely average. 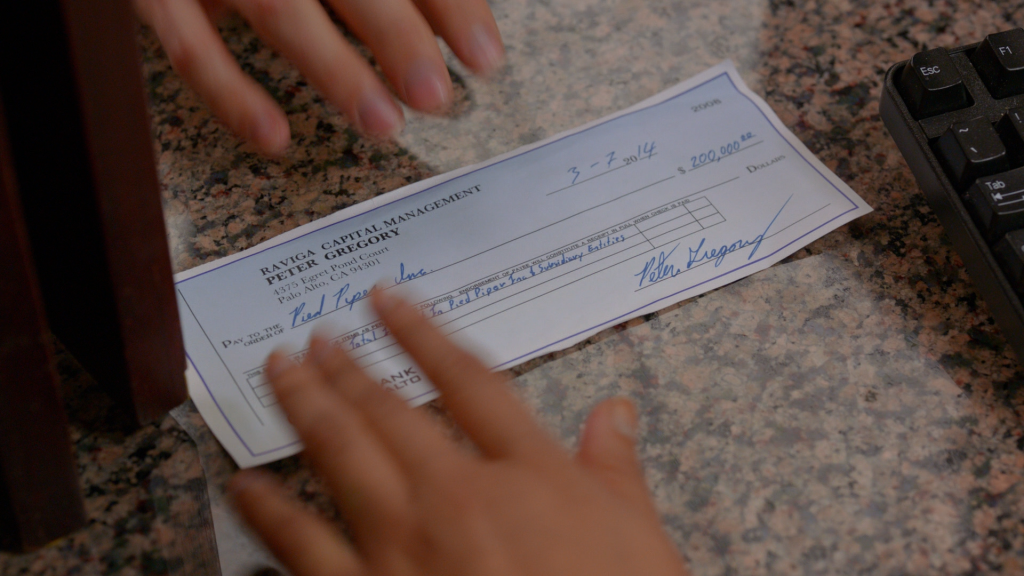 Silicon Valley in 5.1 feels more like a mono sound presentation. Even during the big concert scenes, and large crowd sequences, the show is mostly a showcase for your sound system’s center speaker. Sound rarely drifts into the stereo front speakers, and stays even further away from the surrounds. The show is mostly dialogue driven, and the mix never gets crowded, so I guess that’s a plus. After listening to other TV programs in 5.1, such as Mad Men and The X-Files, Silicon Valley just seems hollow and disappointing.

Silicon Valley: Season One, released by HBO Home Video on Blu-ray, comes packaged in a standard blue keepcase, and an HBO branded slipcover. The front artwork features a version of the show’s main characters, all imitating Steve Jobs’ classic black and white photo, down to the hand gesture. The back artwork features a nice collage of cropped shots from the show, with a paragraph about the show, as well as a list of the special features. Credits and technical info are placed below the Ultraviolet Digital HD banner. The keepcase features reversible artwork, with the opposite side featuring an episode guide set against a nice picture of the show’s main cast.  This packaging is fairly nice for a non-special edition release.

Onto the special features:

Making Silicon Valley – a short, ten minute piece where all of the major actors, the creator, and other members of the crew talk about their inspiration for the show, their connections to real life, and their characters. There’s some really cool behind the scenes shots hidden in this one, I thought it was worth my time.

Techcrunch: Disrupt! – an in depth look at the reproduction of the actual conference on which the Disrupt! challenge is based. A lot of this one is spent focused on how they created fake companies, and the difficulties that they faced, as well as the participation of members from the actual TechCrunch team in the process of recreating the look and feel of the conference 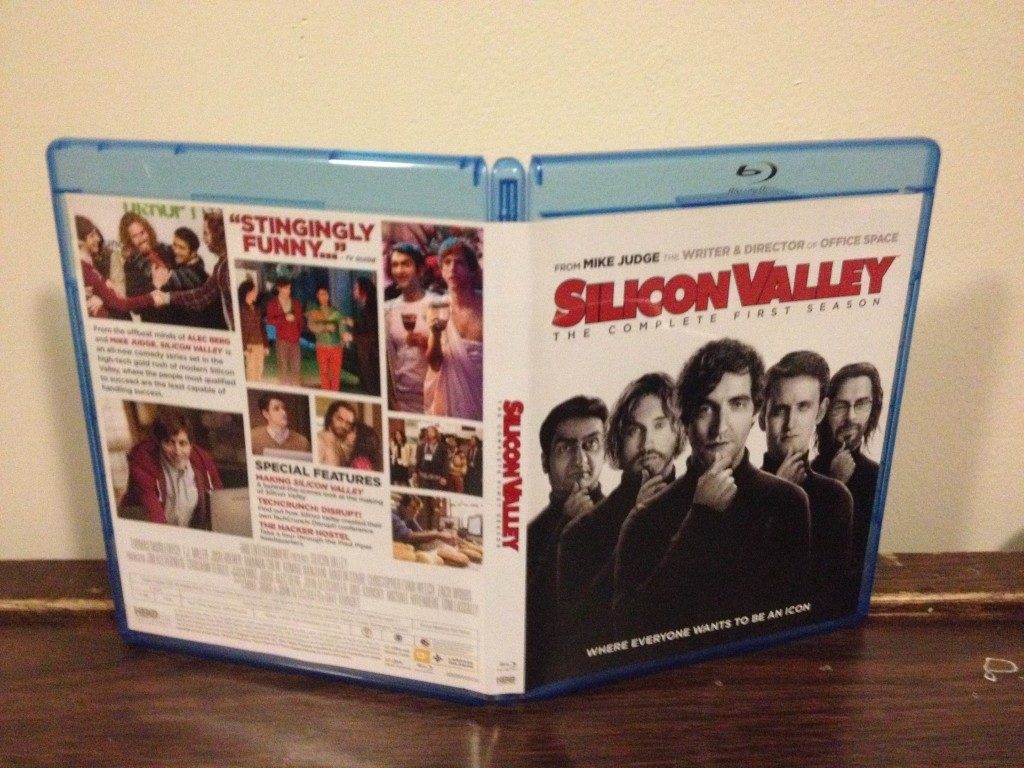 The Hacker Hostel – T.J. Miller takes us through the main set of the show, the Pied Piper headquarters. During the tour, they run into the main characters that live in the house, and they all go through the rest of the house together, in a pretty amusing manner. 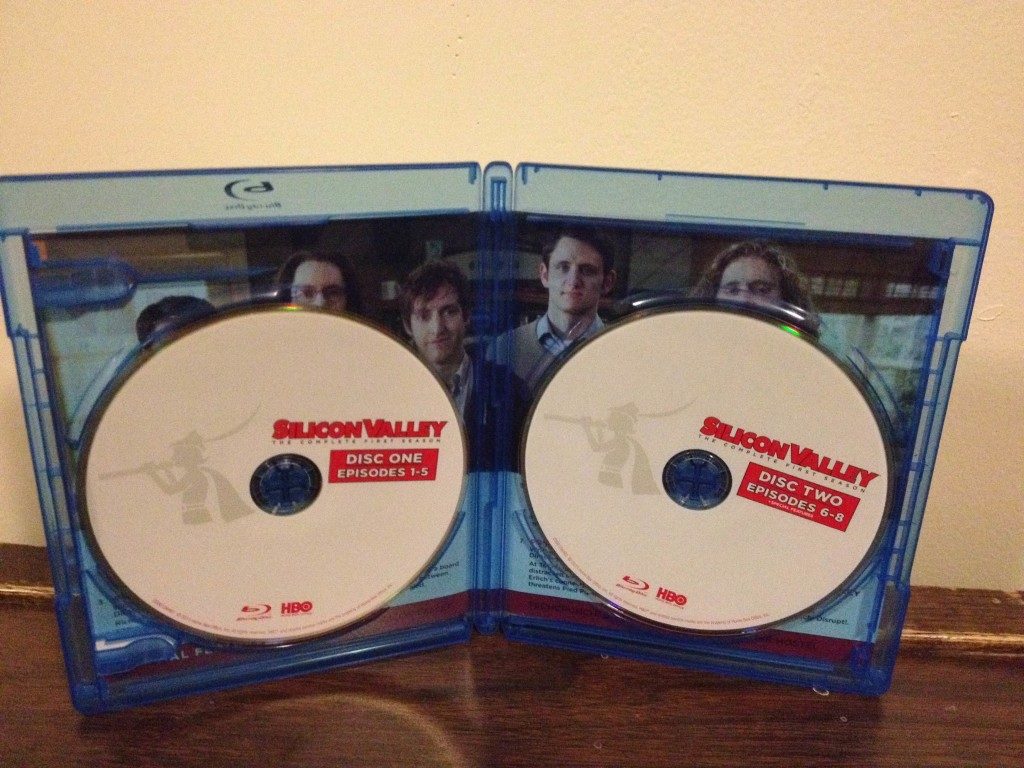 Audio Commentaries – Yes, that’s right. Commentaries. Every. Single. Episode. All 8 have commentaries from different pairs of commentators. Some feature Zach Woods and T.J. Miller, others feature Mike Judge and Richard Hendricks. The commentaries are amusing, informative, and feature great anecdotes about the making of the TV series. There is a wealth of information here for fans of the show to digest. Awesome. 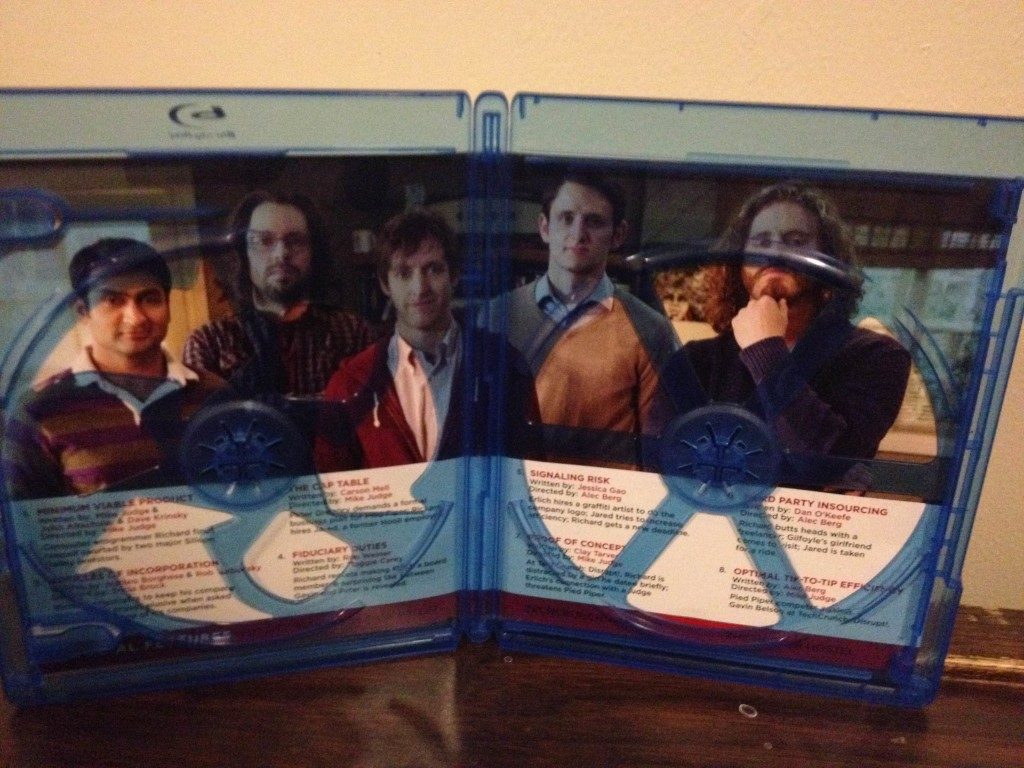 I was a fan of the packaging for Silicon Valley, as I am with most of my HBO Blu-ray releases. The slipcover is nice, and it has reversible art for the keepcase, which is always a plus for me. The included extras are merely average, with the exclusion of the commentaries included. Overall, this one gets a passing grade from this reviewer.

Silicon Valley is a great show, and another notch on the belt of excellent HBO TV programming. The writing is sharp and funny, the production values are off the charts, and the cast is amazing. Mike Judge and his creative team have really hit it out of the park with their dramatization of the tech industry, filling it with witty, and at times sad satire. The show is edited and paced so well, that as episode 8 wraps, all you want is more. Is it perfect? No, but what’s here is so good that I can’t help but recommend the show. The Blu-ray features an overwhelming average visual and audio transfer, never quite hitting the demo material of other shows in the HBO catalog, such as Game of Thrones and True Detective, but the packaging and included audio commentaries are quite good. This Blu-ray comes with a hearty recommendation, based on those strengths alone.