Director Martin McDonagh must have had many influences on this film, as is abundantly clear in the first few moments of Seven Psychopaths. The dialogue, the humor, it all seems reminiscent of something familiar, something great.  It almost feels like a young Tarantino film. It has that sense of stand-out dialogue and character. Yet, there is more; the violence is not Tarantino-esque, in that it has more of that Guy Ritchie feel to it which again leaves us with an unusual feeling the first few moments. I suppose that says more than anything else can, that the first few minutes of Seven Psychopaths sets the tone for what could be a monumentally great film.

This film certainly would not work without the right cast. You take away even just one or two of the cast members chosen and it just doesn’t work. They could not have picked a better cast to fit the bill for this film.  Christopher Walken, Woody Harrelson, Sam Rockwell, and Tom Waits just to name a few are all heavily featured throughout the film and with Colin Farrell in one of his best performances since In Bruges to carry the overarching story along, you really get a great experience. 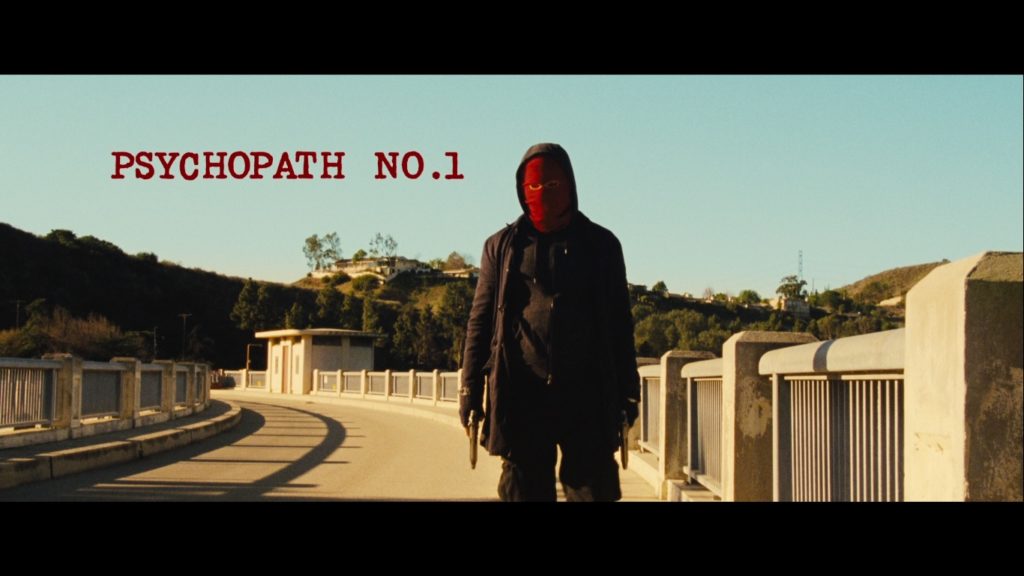 Our Story follows Marty (Colin Farrell), a not so young screenwriter who is trying to finish his ongoing project titled, “Seven Psychopaths.” His best friend Billy (Sam Rockwell) is committed to helping Marty finish the project by not only trying to get his drinking under control but help him with the research of finding psychopaths for his film. As time goes on it is clear there is more to Billy than meets the eye and he has an easy time finding himself in a boatload of trouble that seems to endanger those around him including Hans (Christopher Walken) who is seemingly his criminal mentor.

The movie takes twists and turns and has genuinely great stories. As the origin stories of the psychopaths progress, we get to see a unique intermingling of the over-arching story and the past as Marty and Billy seem to be at the center of it all. I am admittedly a fan of Sam Rockwell, however, this film brings him to a different level and it really is a perfect film for him.

Filmed at a wide array of locations, Seven Psychopaths stands it ground as memorable and well shot. Some of the locations provide what turn out to be quite beautiful shots that are visually striking. I will not go as far as to say that it is groundbreaking or something unforgettable though. What I will say is, I quite like the way this story is presented. It follows a fast pace over-arching story and finds time to slow down for the well developed back stories of the psychopaths. There are indeed some wonderful shots and scenes that beg to be enjoyed time and time again. Filmed on 35mm and given an all around old-school-cool kind of feel to it, the film is, if nothing else, a unique watch. 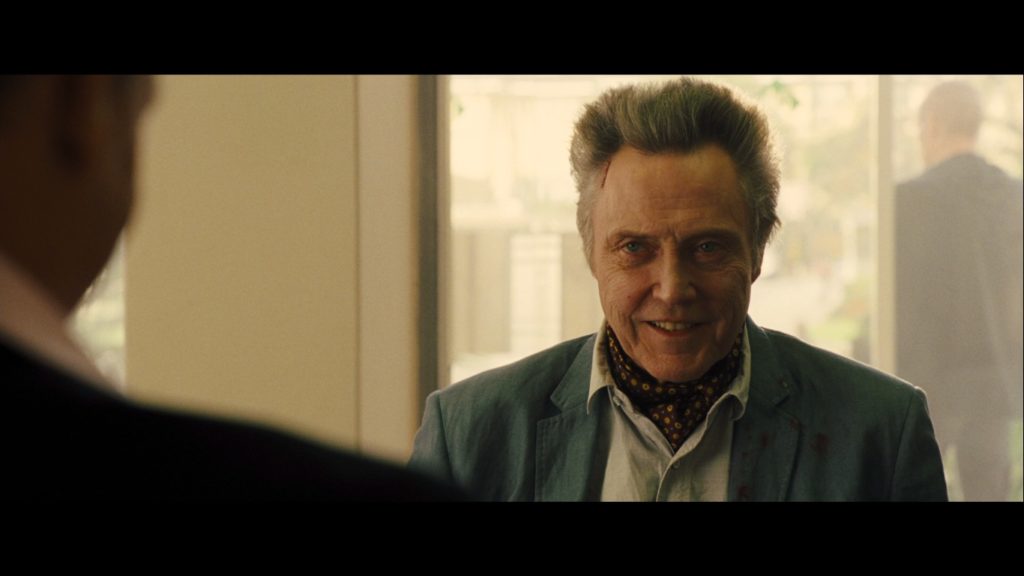 There are such a wide array of scenes that require ample editing from one level to the next and it was executed rather well. The soundtrack lacks anything that memorable, but does contribute to the story at the necessary moments. The transfer to Blu-ray for home viewing is great creating an overall experience that offers explosions and gunfights and great monologues creating a mixture of experiences that can be enjoyed at a steady volume. No hands on the remote for this one. 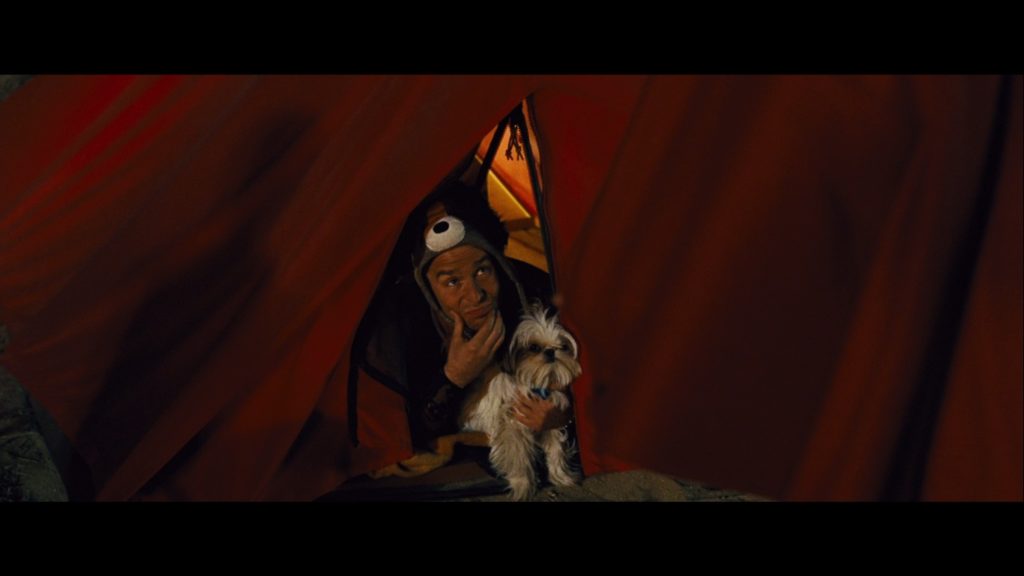 There is not much to say about the packaging, I really feel like the cover art is lackluster and the film really deserves something better than the standard eco-case. It just feels like it’s not quite up to snuff. I guess you cannot really expect much of what is viewed as a “b” movie in a world where that gets nearly completely overlooked. Inside, the artwork does indeed ramp it up a bit, we get a prominently displayed feature of Bonnie the dog that sparks many of the events throughout the film with a background of yellow and some blood spatter. The disc does feature some artwork which actually surprised me, seeing how many of the more well-known films find a way to avoid this lately. 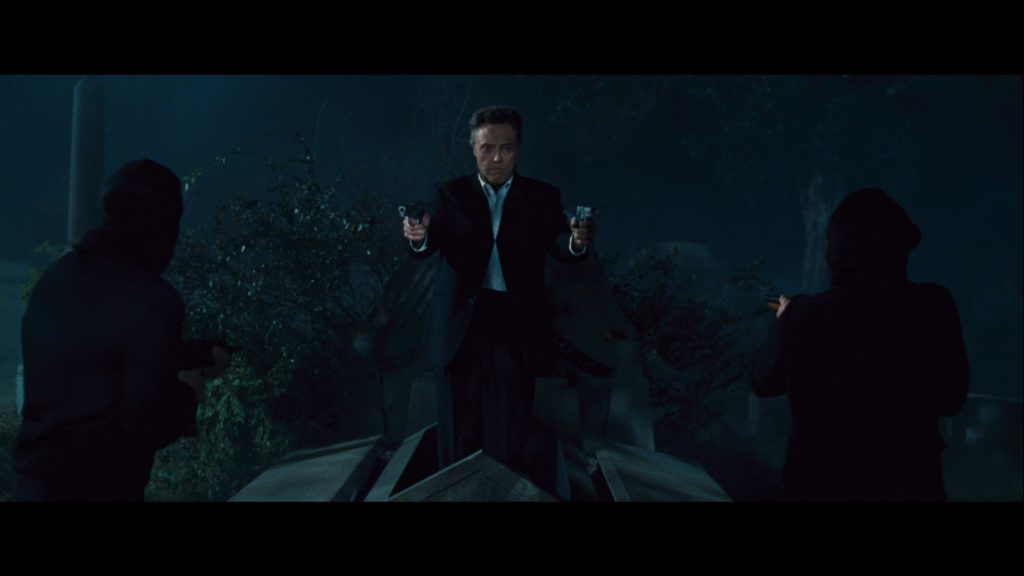 I find Seven Psychopaths to be a conundrum, it doesn’t really fit. Not into the time in which it was released, not into the genre it’s thrust upon and definitely not as a summer blockbuster.  Here’s the thing, the cast is phenomenal and on top of that, it has surprising moments that are absolutely wonderful. It has humor in all the right moments and plenty of heart it has a great complete balance and doesn’t seem to care to appeal to any audience in particular. It reminds me of films like Kiss Kiss, Bang Bang  and not just because this is totally something Shane Black might do but that was another movie that just seemed to come out of nowhere. I am always thankful when this seems to happen.  Is Seven Psychopaths as good? Perhaps not but I think it definitely is unique and has a great combination of story, comedy, and action. It also checks off the twisty story box as well by weaving in and out of the actual events and what is happening in the screenplay at certain points. Overall, it is a fun watch and deserves a spot on the shelf if for nothing more than for a great Christopher Walken performance.   You can purchase this film HERE.