Sausage Party is a 2016 American adult computer-animated comedy film that was directed by Greg Tiernan and Conrad Vernon and was written by Kyle Hunter, Ariel Shaffir, Seth Rogen and Evan Goldberg. Featuring a robust cast of voice actors that include Seth Rogen, Kristen Wiig, Jonah Hill, Bill Hader, Michael Cera, James Franco, Danny McBride, and Craig Robinson to simply name a few, this film was the first CGI animated feature film to be given an R rating by the MPAA.

Labeled as a spoof of Disney, Pixar and Dreamworks presentations, the film tells us the story of a sausage who sets out to discover the truth about his existence and goes on a journey with his friends to escape their inevitable fate. It’s been stated that Rogen worked for eight years to get this film made, however given the nature of its content, most studious didn’t want to put their hands on it. Noting that it came from “an innocent place”, and questioning “What would it be like if our food had feelings”, the executives at Columbia Pictures realized just exactly how messed up it would be should our food be able to have any kind of emotional response. Sausage Party had its rough cut premiere on March 14, 2016 at South By Southwest and made its US theatrical debut on August 12, 2016. Overall it received positive reviews, despite the occasional distressed parent who thought they were taking their children to a kids movie, and it grossed over $138 million. 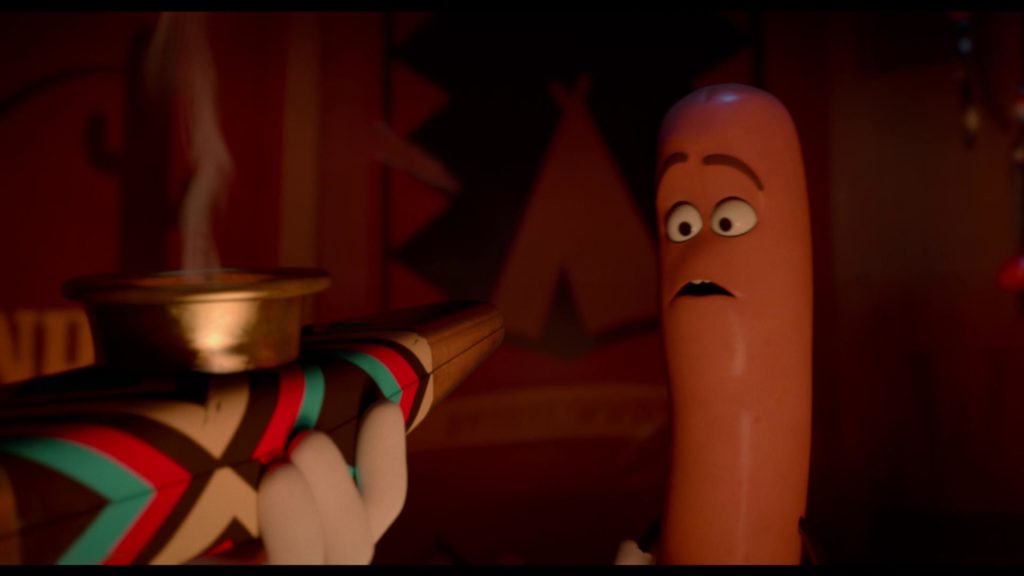 I am going to tell you this, you must go into Sausage Party with a completely open mind. If you do not do this, you aren’t going to be too pleased with the experience that this film delivers to its audiences. In various discussions that I’ve had among my peers, I’ve heard mixed reactions ranging from “absolutely hilarious” to “completely offensive and shouldn’t have ever been made.” So, if you do not have an open mind when it comes to comedy, then don’t waste your time; the easily offended will squirm for the entire film.

However, I have to say that I completely enjoyed this film and everything that it had to offer. The beginning of the film felt that it went a little too slow for my personal taste, however a lot of that was the character introduction, storyline creation and development that attributed to that. Once the story had its foundation set, it was nothing but a great experience from there. Giving us a huge range of extremely crass jokes, I don’t think I’ve laughed so hard at a film like this in quite some time.

Not only was this film hilarious in every aspect, but the fact that it pays recognition to various cult classic films that include The Terminator and Stargate allowed for not only myself, but for my wife to immediately recognize them and really respect where Rogen and his crew went with the production of this movie. 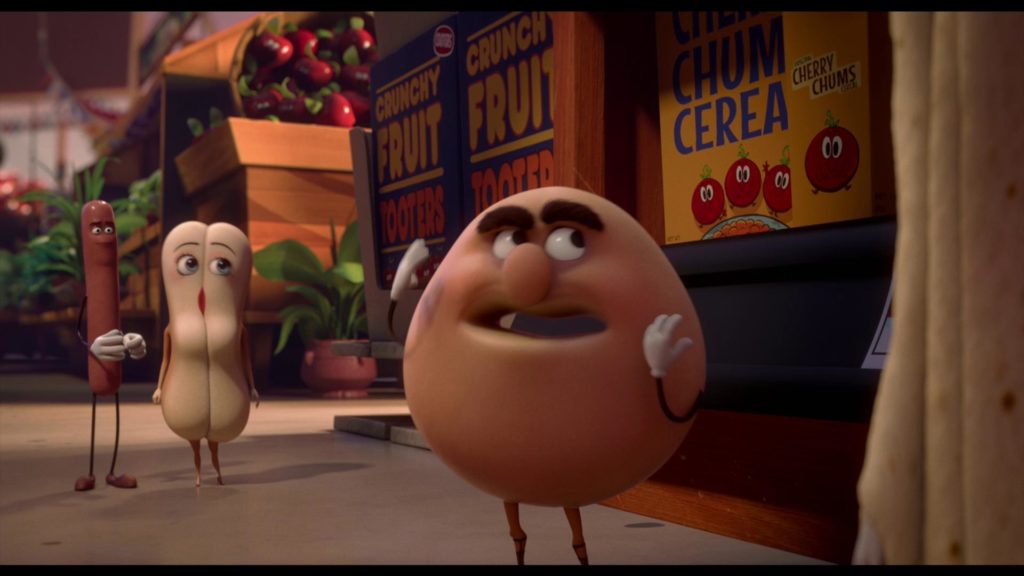 It’s completely obvious that Sausage Party isn’t really a 4K film as it was rendered in 2K and has a 2K Digital Intermediate.  However, the inclusion and use of HDR throughout the film allowed for a really nice experience.  Giving the audience an extremely robust color palette, this UHD transfer with HDR allows early adopters to continue to gain an appreciation for the 4K UHD format while it is still in its infancy.  The 4K UHD release of this film does offer a decent amount of visual improvement over its Blu-ray counterpart, as animated CGI movies to scale up really well and often look as if they are a real 4K film. The CGI animation really pops in HDR as well, so even with a minimal resolution upgrade, the UHD experience is as good as it can get for a 2K animated feature. 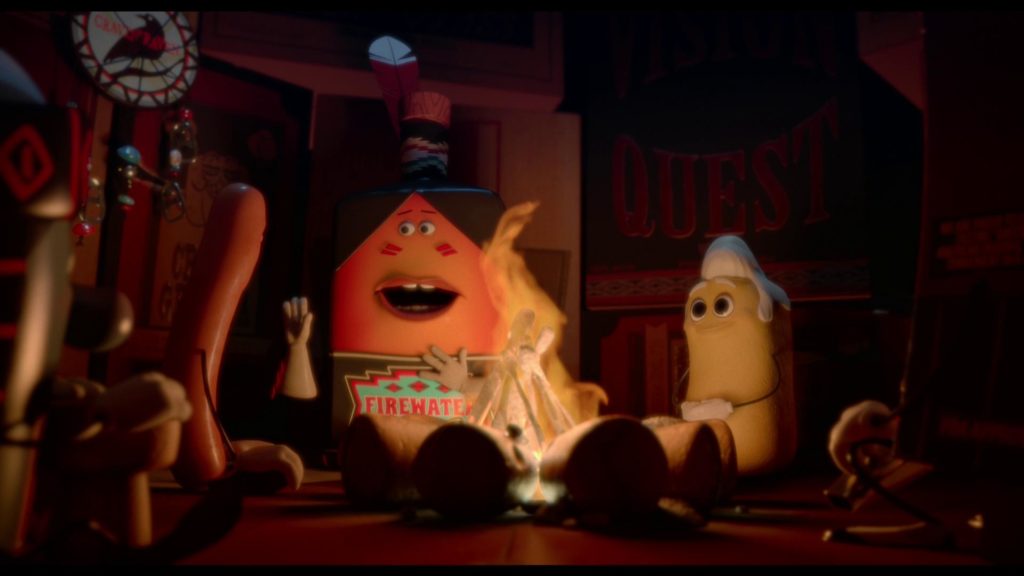 Coming at us bearing my personal favorite audio technology, Dolby Atmos, “Sausage Party” really packs a punch.  While it’s not necessarily an extremely action driven film, there are a handful of parts that make use of the elevation aspect of the scene that’s being played out allowing the audience to really become immersive with the happenings within.  Every single aspect of this film and this release was extremely crystal clear in terms of audio.  I was able to completely hear and understand everything as the story progressed without any distortion whatsoever.  The films musical score is one that’s definitely worth noting because it does a fantastic job at relaying the emotional aspect of the various parts of the film, allowing even those who may have any optical interference to be able to understand what is going on.  In fact, one extremely notable area of the film’s musical score was the use of the more serious tone of music when Nick Kroll’s character had finally been pushed over the proverbial edge.  It did an absolutely fantastic job at letting us know how he was feeling and allowing me to convey how great it was without throwing any spoilers in this review. 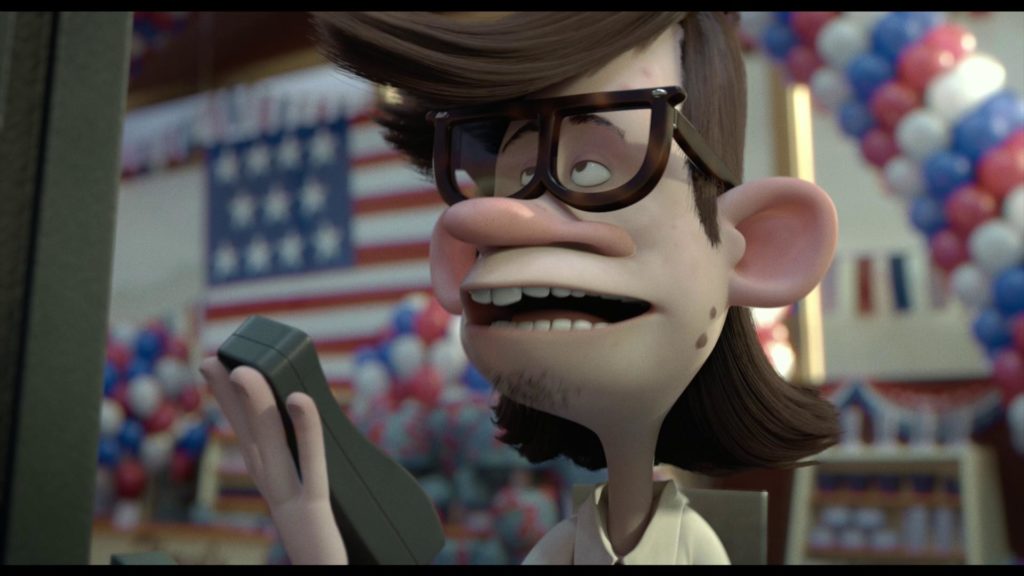 Sausage Party comes packaged in your standard 4K UHD amaray case.  Included within this films release is your standard 4K UHD Blu-ray as well as a standard Blu-ray copy of the film.  In addition to that, there is a digital copy redemption pamphlet allowing you to add the film to your personal digital library for on the go stream.  Sausage Party also comes packaged with a slipcover with the films initial pressing.  My biggest complaint, personally with this release, is the lack of innovation with the cover art.  With the majority of it taken up by the cast list, it doesn’t really offer much in terms of the film’s hilarity at all.

Much like any other 4K UHD Blu-ray Release, Sausage Party doesn’t include any additional content on the UHD Blu-ray disc.  All provided bonus content is made available on the included Blu-ray disc.  Included with this release is: 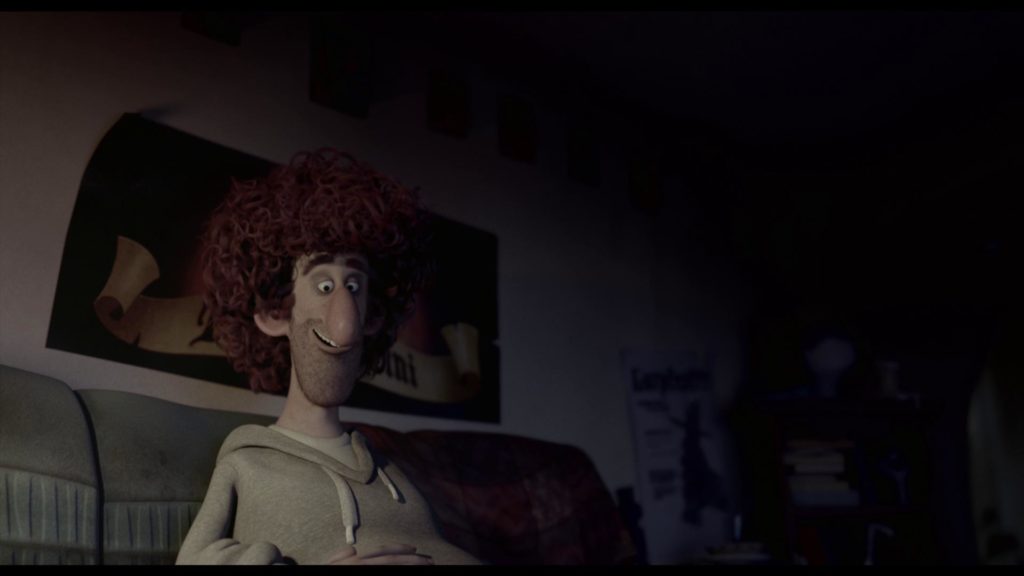 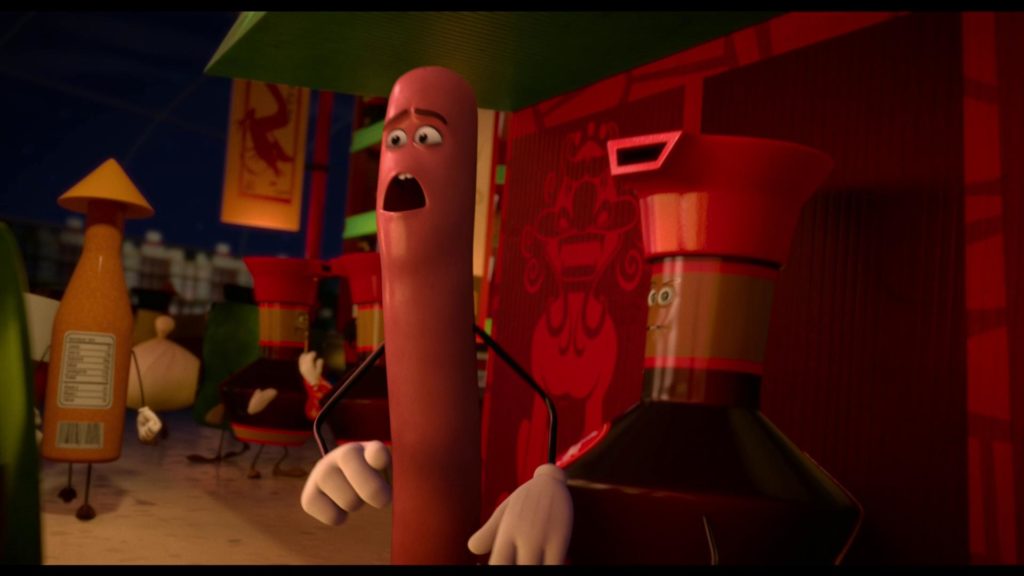 Overall, I really enjoyed Sausage Party and everything that it had to offer.  It was an extremely belligerent film with some extremely crass humor and it really isn’t for the easily offended.  While the majority of the jokes that are played out in this film feel as if they may be immature or geared towards some high school kid who’s hopped up on whatever his drug of choice may be; I feel that if you go into this film with a completely open mind with the only expectation of getting a few good laughs you too will enjoy this film.  The overall video and audio presentation of the 4K UHD release was solid.  While it isn’t a real 4K release due to the fact that CGI is rendered at 2K, the use of the HDR aspect helped add a boost in quality.  The included Dolby Atmos audio track really helped to add some depth to the film as everything played out.  If you’re like me and already have a complete 4K setup with HDR Support, I would definitely recommend grabbing the 4K UHD release; however if you do not have a television that supports the implementation of HDR, then the standard Blu-ray release will definitely do for your personal collection. 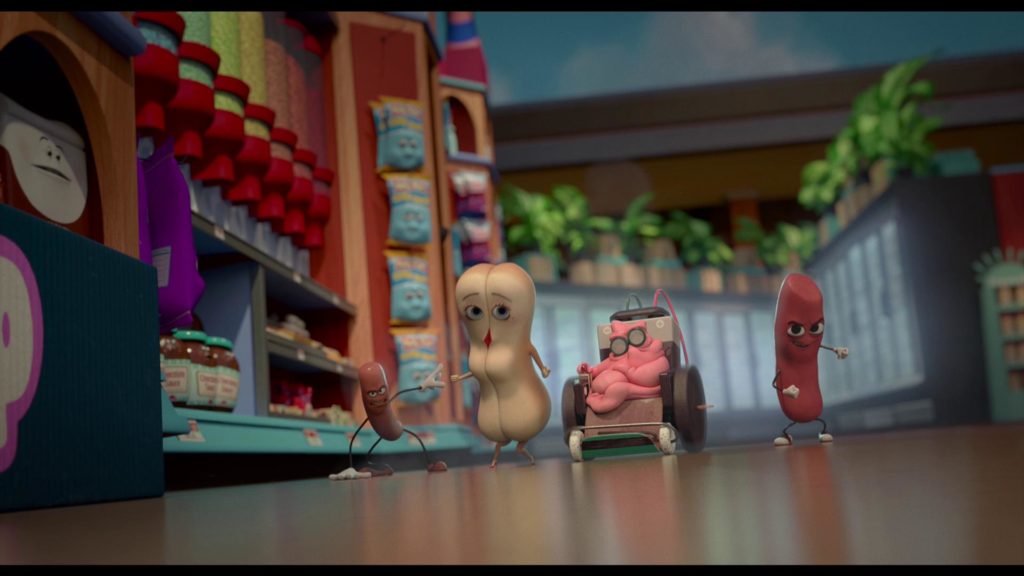