The first Warner Archive Blu-ray I ever acquired was their release of Blake Edwards’ The Great Race. Compelled by the promise of a zany comedy and strong performances by Tony Curtis and Natalie Wood, as well as a large scale pie fight, I instantly fell in love. I found myself captured by Edwards’ ability to create controlled chaos and still manage to find humor in all of the mayhem the movie called for. As a result, when I was tasked with Warner Archive’s new release of Edwards’ 1981 motion picture, S.O.B., I dived in with anticipation. 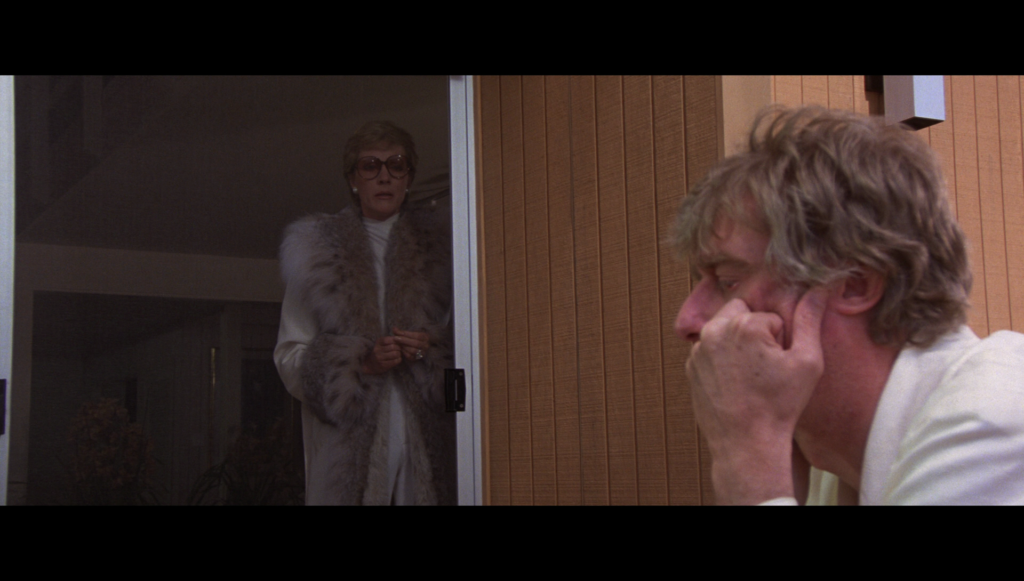 S.O.B. starts in medias res as major Hollywood director Felix Farmer suffers the first major critical disaster in a long career of box office successes and critical acclaim. Suffering a complete mental breakdown, he detaches himself from reality in his wealthy Los Angeles estate, forcing his entourage of friends to jump to desperate measures to snap him back to reality. At the same time, he’s wanted by the studio head who’s forced to deal with the mess his film has made, and his wife Sally Miles is on his back to expedite the process of divorcing him in this state. All of the pressure, as well as multiple suicide attempts backs him into a corner, where he realizes the only way to save his life and his career is to reshoot massive portions of his film in a completely different genre: soft-core pornography. 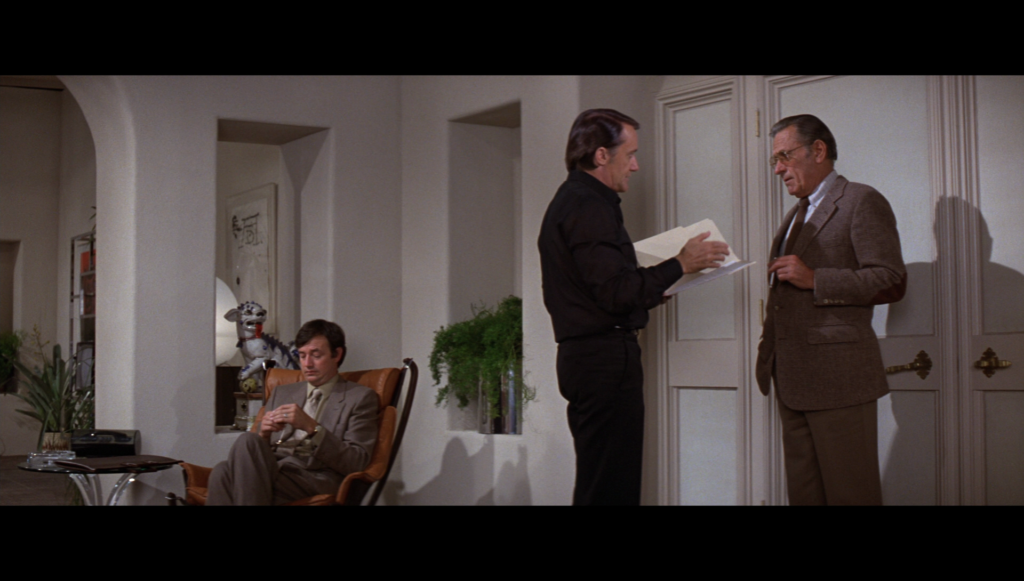 Hollywood meta pictures more often than not tend to struggle to find that balance between overly indulgent and genuinely interesting as they attempt to pull back the veil on the people who work in the industry on our massive blockbuster movies. Blake Edwards and his creative team, rather than try to expose the darkness of Hollywood outright through means of traditional drama, do so in a way that fits Edwards’ style best: absurdist comedy. Even though S.O.B. hits all of the main plot beats that Hollywood insider films hit, such as highlighting their overt selfishness, their overly extravagant and carefree lifestyles, and how detached everyone appears to be from the gravity of the situations they land themselves in, the script’s application of comedy combined with Edwards’ fantastic ability to coerce brilliant timing and delivery from his performers lifts it above the otherwise often retreaded ground. 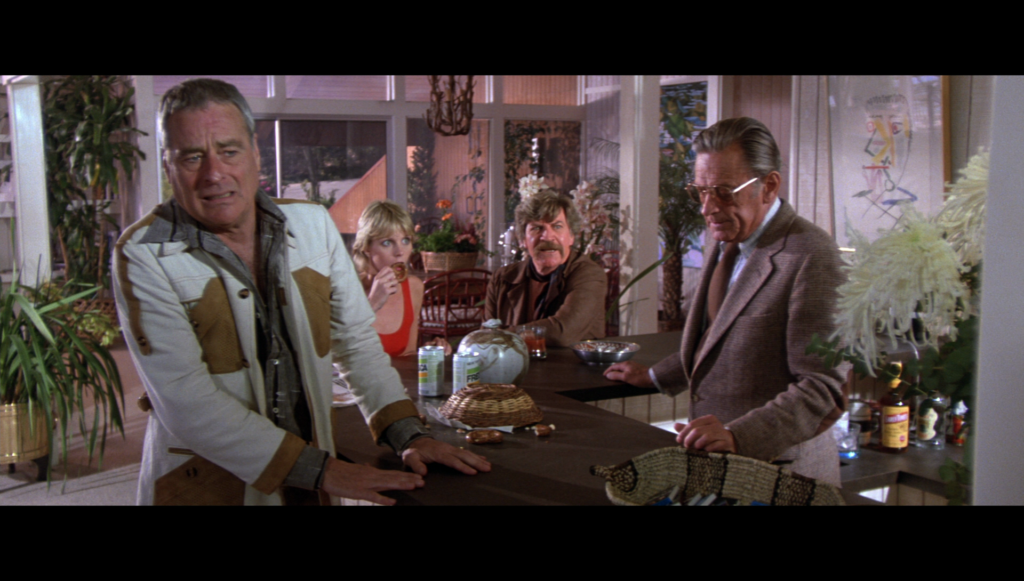 S.O.B. is the kind of movie, that due to the charming performances of leads such as Richard Mulligan as frantic director Felix Farmer, Julie Andrews as Sally Miles, Robert Vaughn as menacing studio head David Blackman, and an incredible performance from Robert Preston as estranged Dr. Irving Finegarten, it can get away with making jokes out of suicide, pornography, and general Hollywood excesses without any of the discomfort that’s usually associated with these acts. Every member of the large ensemble cast plays into their roles with 110% of the required enthusiasm as Felix tries his best to navigate his way out of the hole he’s dug himself into with his massive flop. 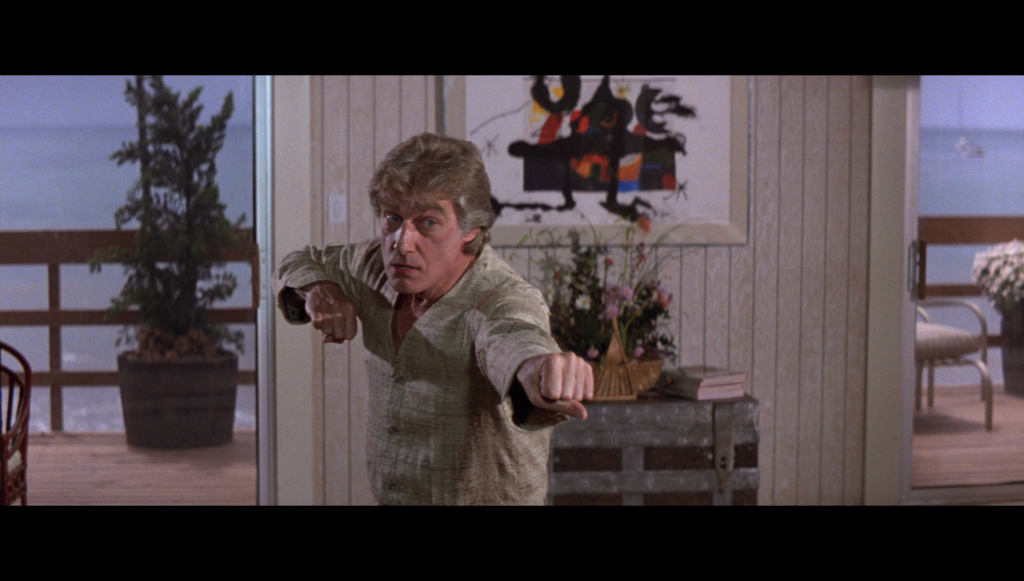 On top of all the mayhem surrounding the central story of Felix Farmer, Edwards’ and his editing team manages to juggle a vast quantity of side stories which tackle the vicious nature of the press in Hollywood, the narrow-mindedness of the affluent elite, the struggles of mourning a lost friend, the struggles to maintain committed relations in the industry, and still manages to find time to fit in a massive car chase, several acts of wanton destruction, a funeral, large portions of a movie shoot, and a large scale Hollywood party. Seriously, this movie is BUSY. It speaks to the talent of the production team involved that they were able to manage such an overstuffed script and still maintain its comedic nature, something that other productions have failed to do in spectacular fashion. 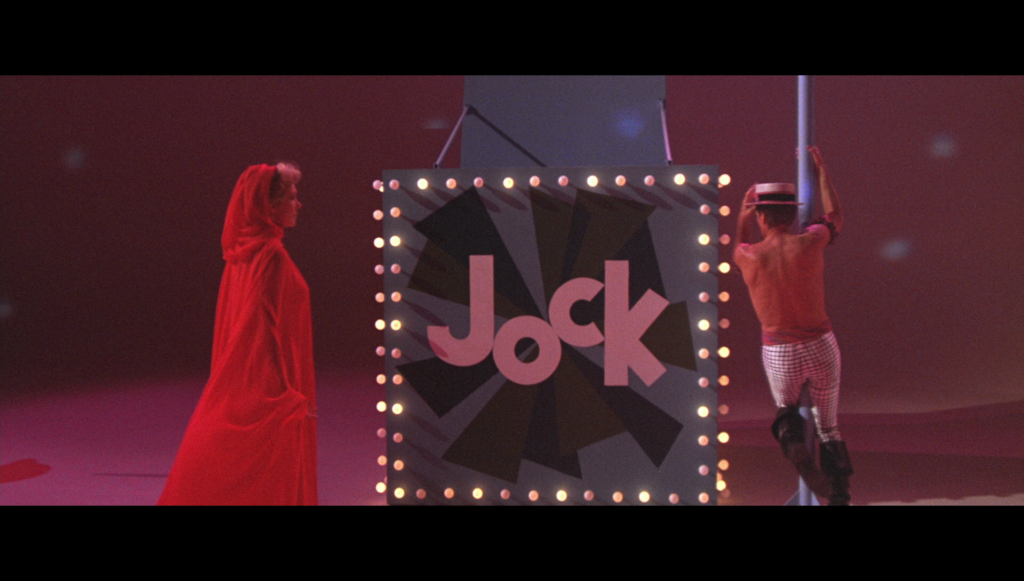 S.O.B. is a powerhouse, and a triumph for those involved. It’s hard to imagine a modern director being able to pull off the same thing today, as so many struggle to keep things balanced with a barebones comedy story as it is. In keeping with the tradition of his phenomenal The Great Race, Blake Edwards crafts a masterful satire that is as equally biting and dark as it is supremely funny, and most importantly, incredibly satisfying. I so seldom get a chance to sit through a movie as evenly entertaining as this one.

S.O.B. was shot on 4-perf 35mm film with Panavision anamorphic lenses for a final aspect ratio of 2.35:1 for theatrical prints. The film is presented from a fresh HD master created by the team at Warner Archive in 1080p resolution, maintaining the original 2.35:1 aspect ratio. 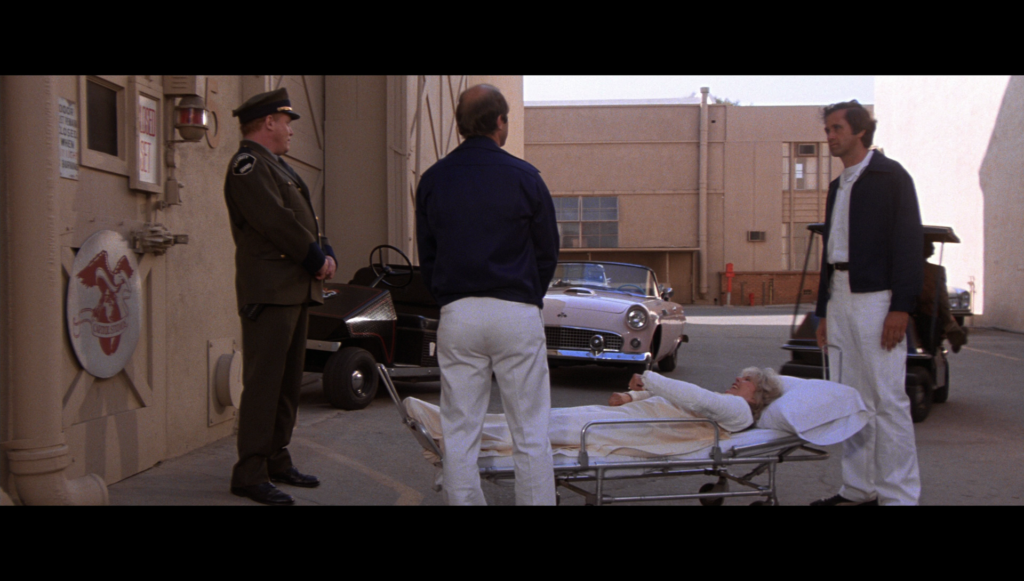 S.O.B., for all that it manages to pull off narrative wise, is not nearly as crazy of an image to behold in 1080p. It favors a grounded color scheme with realistic yellows, grays, and browns that look healthy, but don’t exactly astound. Skin tones are healthy, and detail is strong even in wide-shots and location shots that take us into the thick of the Hollywood studio system. Grain is uniform and light across the entire feature presentation, and outside of shots of the, “film within a film,” which have heavier grain and decreased contrast to emulate the look of print film, S.O.B. looks wonderful. It certainly won’t ever dazzle like modern digital production, but Warner Archive has done an excellent job preserving this film for years to come.

S.O.B. is presented on home video with a DTS-Master Audio 2.0 mono soundtrack, mirroring the way it was presented in theaters in 1981. 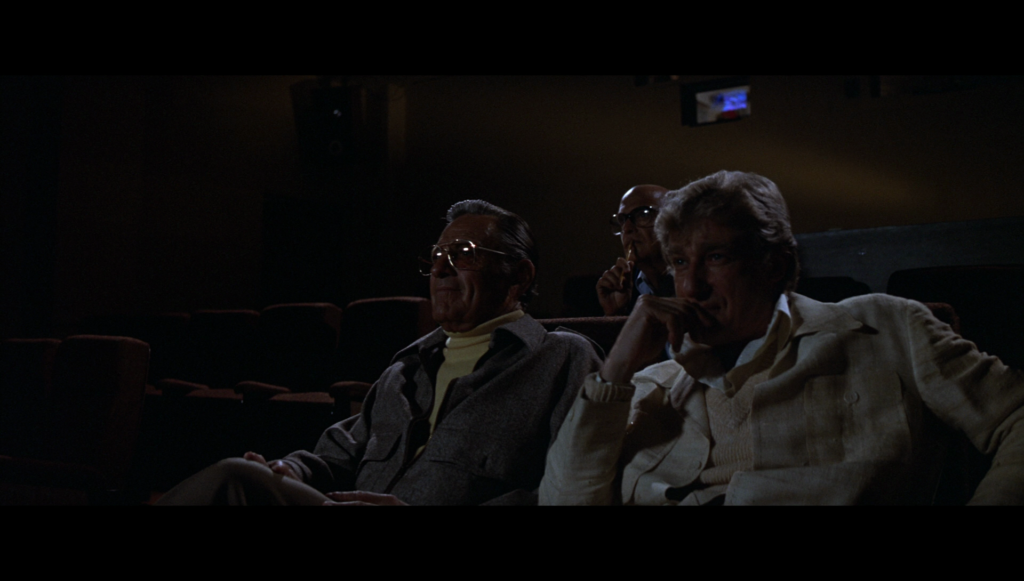 Although the movie juggles a massive quantity of plot, in does so with a stylish mono track that exhibits all the traits of a proficient 80s Hollywood production. Dialogue is rock solid, and mixes well with the crazier sound effect filled sequences and the film’s score is well balanced throughout the entire feature. There is no distracting hiss or distortion. Warner Archive has done another stellar job on the audio front for this film as well.

S.O.B., released to home video by the folks at Warner Archive, is packaged in a standard Blu-ray keep case. The front artwork features a reconfiguration of the film’s original theatrical poster, featuring a sun-glass wearing, cigar smoking bull sitting in the director’s chair, flanked on either side by a megaphone and a film reel shipping container and the film’s advertising slogan below. The back artwork features a spread of the film’s massive ensemble cast, as well as a few paragraphs about the film, and below the spread are the film’s credits, and the release’s technical specifications. There’s something distinctly old timey about this release’s packaging, one that harks back to the days of VHS and Laserdisc releases. I’d swear if this wasn’t in a blue case, it would feel at home printed onto a well-worn cardboard sleeve. Take that as you will, I think it’s pretty neat. 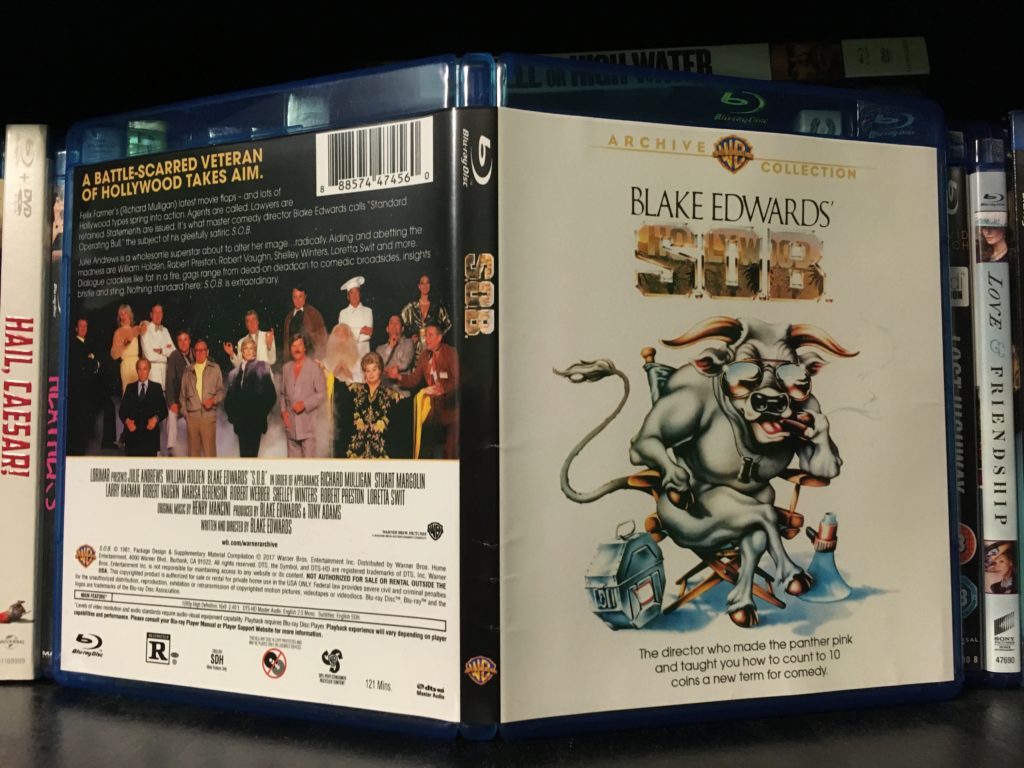 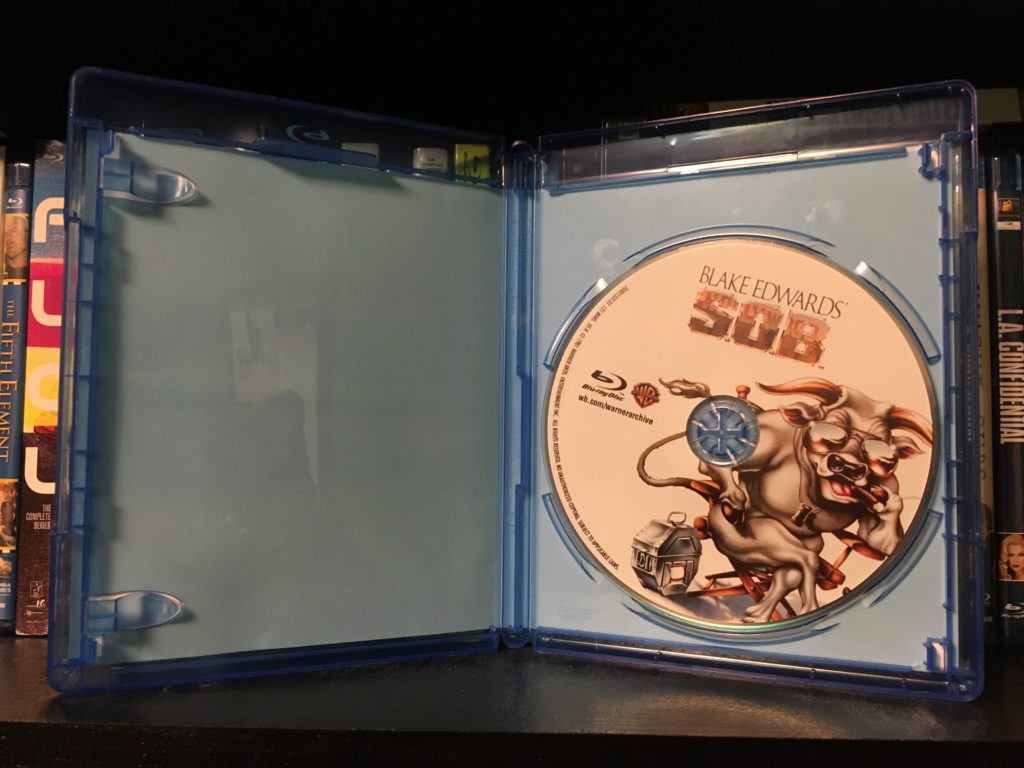 The only feature included on the disc is the film’s original theatrical trailer. I guess it’s expected at this point, for a film that doesn’t really have much of a legacy to maintain. Such is life, I guess. At least the packaging is nice! 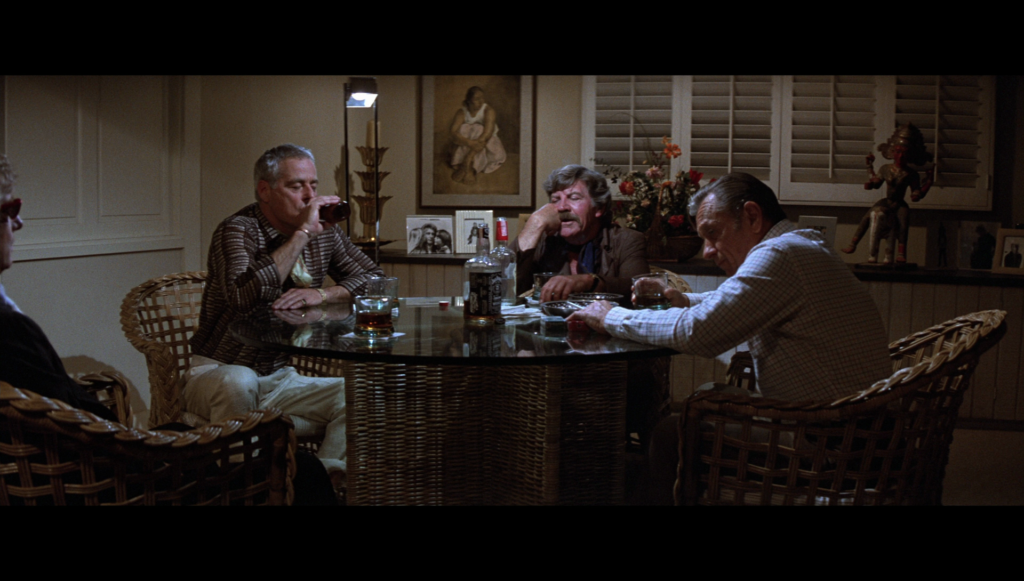 S.O.B. is one of those films that saw a divided critical reaction and never really found an audience in its initial theatrical release. It received both Golden Globe and Razzie nominations in its year of release, which is just a downright shame. As a result, I would wager that most eager home video collectors have never been exposed to this delightful slice of Hollywood satire, as was the case with myself. It’s the kind of film that’s ripe for reexamination. Luckily for us, Warner Archives has done a fantastic job presenting this film in 1080p for a new generation of curious film fanatics, with a strong mono audio track and decent packaging. Absolutely recommended.