In 1976, the world was obsessed. It seemed a simple a rivalry had taken the world by storm.  During the 1976 Formula One racing season the show down between James Hunt and Niki Lauda was all anyone could talk about and for good reason.  Formula One racing has always drawn lots of attention it brings danger and high octane intensity into one sport.  This is the main subject of the Ron Howard’s critically acclaimed 2013 film Rush.  Two relatively fresh faced actors with some serious talent (Chris Hemsworth and Daniel Brühl) take us on a thrilling journey of rivalry and coming to terms with who you are one race at a time. The true tour de force turns out to be Brühl who is able to capture the essence of Lauda in such a way that will stay with the viewer for some time to come. 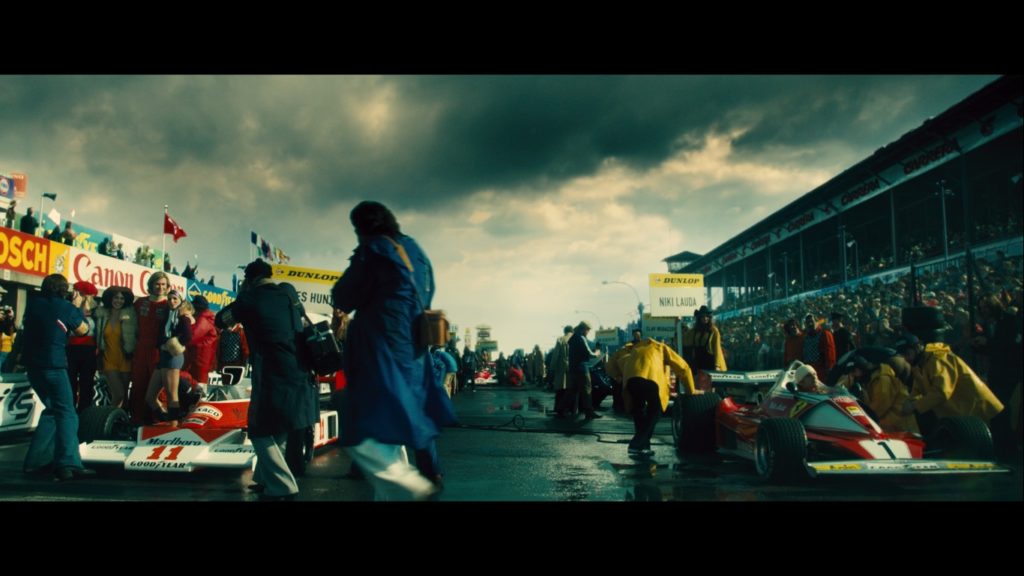 Our story follows James Hunt and Niki Lauda both destined for greatness, both on distinct paths to glory. Hunt chooses the path of parties, fun, and all around raw talent.  Whereas Lauda seems to take a rather systematic approach to life and to racing. At different points in the story we find ourselves rooting for both sides because ultimately each racer represents a part of us we are constantly trying to fight.  As both racers rise through the ranks of the formula racing circuit, we find they are met with both success and tribulation as each one suffers the consequences of their own personalities.  Who will be the ultimate victor be at the end is all we can think as we watch this story unfold. 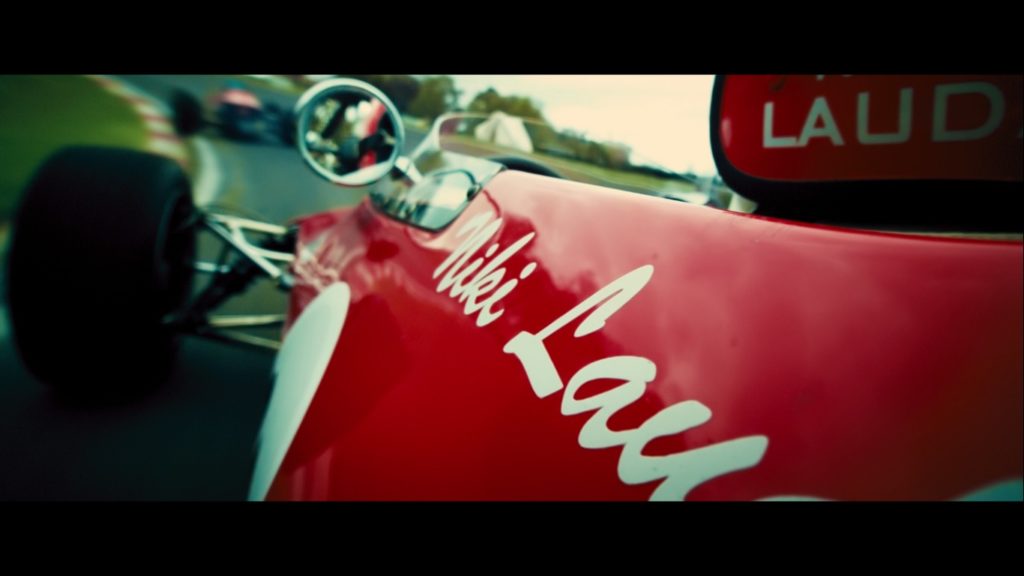 Making this film appear as well shot and action packed as it is, is a feat of its own.  I cannot express enough just how edge-of-your-seat crazy cool this movie looks.   DOP Mantle used a wide variety of cameras and hybrid filming techniques to achieve the shots we see in the final product. The primary camera used during filming was the ARRI Alexa while IndieCam GS2Ks were mounted on all the vehicles and they even had some Canon EOS C300’s posted around to catch any accidental good shots that could be used for the final product.  In the end they used a combination of archival footage, filming, and CGI to achieve what would turn out to be one of the most well-shot racing movies of all-time. 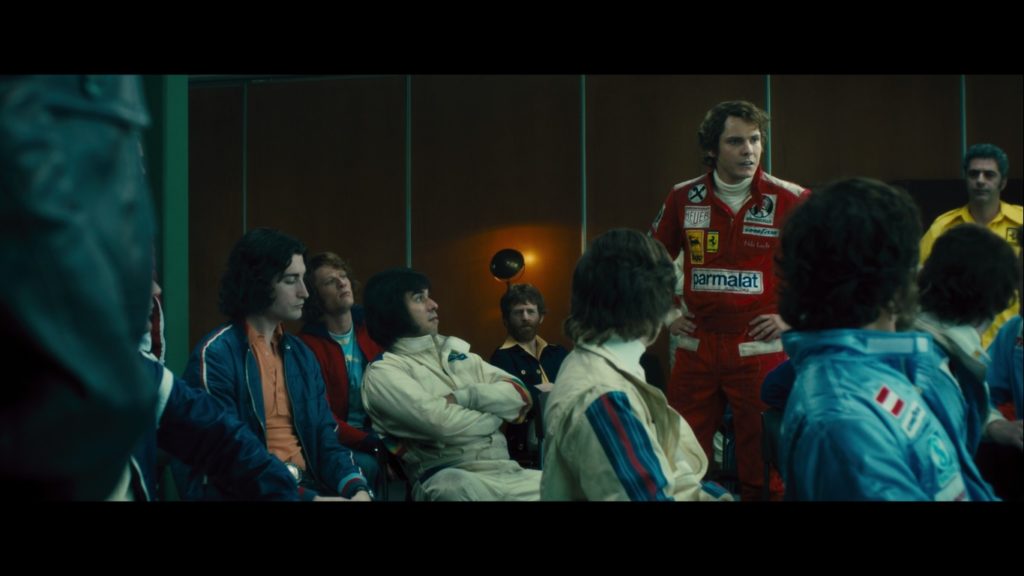 This movie is LOUD.  It is loud for all the right reasons and should be viewed cranked up with no apologies to your cranky neighbors.  The roar of the engines and the constant banter results in an great audio combination.  There is not much to say about the score or the soundtrack.  When reviewing films I try to pay attention to all the aspects but it is genuinely difficult because so much is going on and the story grabs you right away and does not let go. 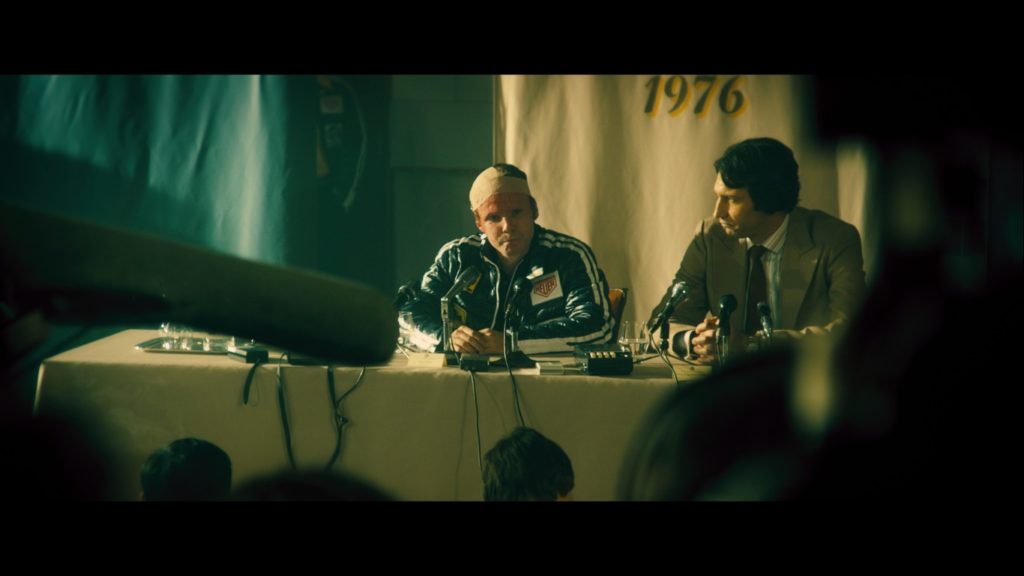 I rather like the case and artwork chosen for this release. The artwork featured does well, perhaps unintentionally, to showcase the duality featured in the film dividing the two racers.  The only thing binding them together is the the word/title Rush which is rather suiting.  I do think it could’ve benefited from a slipcover but the case does the job well enough.  The two discs in this instance are not on a spindle, however the discs are housed on both sides of the case making the case itself feel rather sturdy. Overall the production company did not go all out most likely due to how unnoticed this film was, however it is a lot nicer then it could have been. 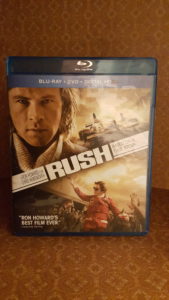 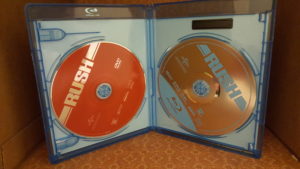 When you wander over to the extras menu like I did you may feel a bit disappointed as they are only three features listed.  However, worry not because within each are many different featurettes. The extras and their featurettes are as follows: 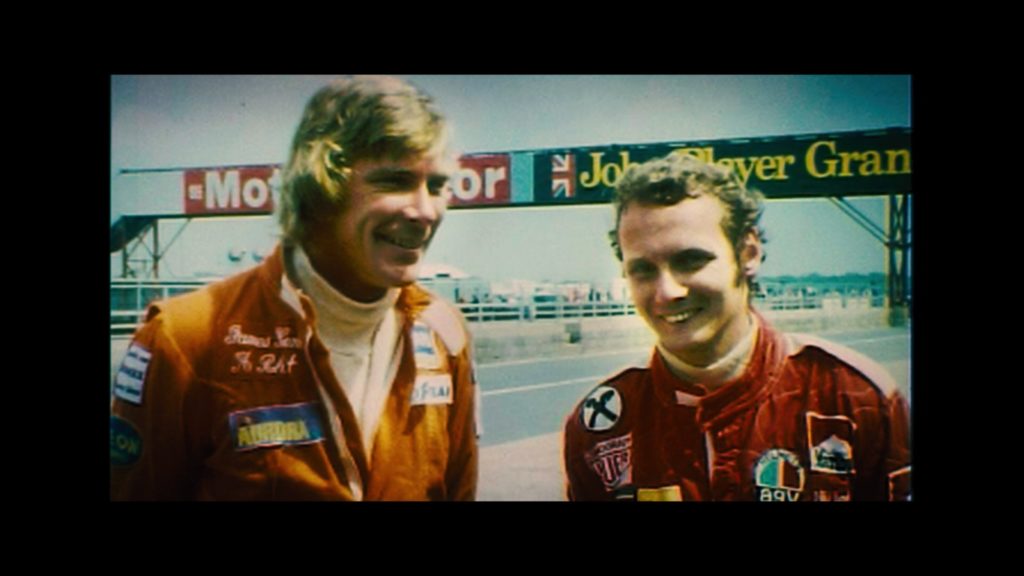 I admit that I watch this film often.  There are not many times I can say that when writing a review but there is just something that draws me back to this story over and over again.  The duality of the characters within and the high thrills that are experienced when watching this film keep coming back.  It has everything to do with the way the movie is filmed and how well the characters are developed.  I never thought it would become one of my favorites so easily; however, time and again I pop it in and just escape which all I can really ask for in a film when it really comes down to it.  The acting and writing are spot on, the history and accuracy are where they need to be.  By all accounts this movie fires on all cylinders and keeps the ride going to the very end.  I highly recommend this one you can purchase this version HERE.