Ronin is a 1998 action-thriller from John Frankenheimer, presented here on 1080p from a 4K restoration scanned from the negative of the original 35mm print by Arrow Video, which was overseen and approved by director of photography, Robert Fraisse.

In a nutshell, Ronin tells the story of a team of ex-special forces operatives hired to steal a heavily guarded and mysterious briefcase on the streets of France. Boasting a stellar cast which includes Robert De Niro, Jean Reno, Stellan Skarsgard and Natascha McElhone, it would be an arduous task to ignore this one.

Often touted as a return to form for Frankenheimer, who had a string of highly praised films in the 60s and 70s, including 1962’s iconic The Manchurian Candidate, before suffering a decline in output quality in the 80s and early 90s, largely due to a problem with alcohol, Ronin has finally been given the prime Blu-ray release it deserves.

The film starts off with Sam (De Niro) entering a pub occupied by Vincent (Reno), Larry (Skipp Sudduth) and Deirdre (McElhone), before being taken to a warehouse to meet with Gregor (Skarsgard) and Spence (Sean Bean) and being tasked with stealing the aforementioned briefcase.  From here begins a tale of trust, mistrust, double-crossing, gunfights and brilliantly executed car chases all beautifully inserted into the gritty streets of Nice.

Where the film excels is the realistic feel it has. It refuses to romanticise the heists, methods, crimes and dialogue and instead portrays them as part of a seedy underbelly, a bad world that does nothing but take it’s toll, which is particularly effective given the reputation France has as a beautiful country and the home of romance. The cinematography and limited colour palette underpinned by Elia Cmiral’s wonderful melancholic score really drive home the dirty feeling of the story.

As the film goes on, it begins to increasingly add tropes of generic action films – explosions, a border-line silly convoluted plot including Russian bad guys, (near-perfect, I’ll admit) Car chases and the odd one-liner. Whilst certain parts toe the line between charming and cheesy, it never crosses it and works well when juxtaposed with the emotive backdrop mentioned above. That said, I can’t help but feel like this film could have been a masterpiece if it had maintained fully the style of the first half, and held back on the action tropes.

The picture was absolutely magnificent. It takes the grit, grime and graffitied streets of Nice to the next level. The wrinkles, the sweat and the bags under the eyes of our weathered mercenaries are clear as day as are the dull, run-down settings a lot of the scenes take place in.

The peeling wallpaper, dilapidated walls and filthy streets stand out and demand your attention. The slight grain on the close-up shots compliments all this perfectly, and it all comes together into a cacophony of visual delight that reaches a point where you almost feel dirty yourself whilst watching it.

I really couldn’t be happier with the picture quality, Arrow yet again knocked it out of the park. The quality and care they put into their releases is second-to-none.

The audio on this release includes both 5.1 lossless DTS-HD MA and  2.0 Stereo in lossless PCM. I watched this on the 5.1 through surround sound and was suitably impressed.

The whole thing was very dynamic. The gunshots and explosions sounded really crisp and loud, making you feel right there in the middle of the scene. The score stood out well and the dialogue was clear. None of the sound was distorted or sub-par and I assume the same would be said for the 2.0 PCM version given my complete faith in Arrow.

The only gripe I have is that some of the explosions and gunshots were considerably louder than the dialogue, which makes sense and would be perfect in a theatre or for a film night at home, however it isn’t always ideal for home viewing.

The packaging is nice. It comes with a slipcover, reversible sleeve with original and newly commissioned artwork and a booklet featuring pictures and a new essay on the film by Travis Crawford.

As is traditional with Arrow releases, there are plenty of extras on the disc. However, only one original extra – a very interesting 31 minute interview with Robert Fraisse where he talks about his career and craft in depth. Another notable extra is a 27 minute episode of Cinefile called “You Talkin’ to Me?”, in which Quentin Tarantino talks about the career of Robert De Niro. Also included is an alternate ending, which is a bittersweet addition for me because it is a thousand times better than the ending Frankenheimer went with. 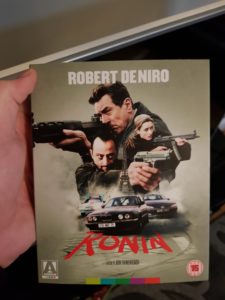 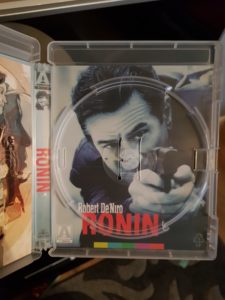 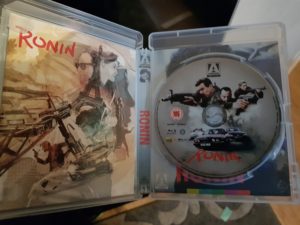 The special features standards of the theatrical trailer and gallery of photos are on there, as well as a set of seven archival features (all of which are listed below), and the very technical director’s commentary that was included in the original DVD.

Had this not been an Arrow release, the comprehensive list of extras would have earned a 5/5, however Arrow have to compete with themselves on this front due to their track record, and that’s tough competition, so it receives a 4/5.

Resolution: 1080p taken from a 4K restoration of the original 35mm negative

Arrow’s release of Ronin is glorious. It’s a must have for fans of De Niro, Frankenheimer or Arrow  and would be a welcome addition to any film collectors library.