Meander long enough through the nooks and crannies of pop culture and you’ll stumble across a Road House reference. Younger folks will no doubt cite the recurring call out to the film on Family Guy, older fans will cite MST3K host Mike Nelson’s longtime fascination with the film (he wrote an entire chapter on it in his first book: Mike Nelson’s Movie Megacheese), and most folks are familiar with steakhouse restaurant chain Texas Roadhouse. The film has always had the ability to command attention from film fans, whether it’s intentionally or ironically, and it’s that power that lends a certain air to the film that distinguishes it from the similar fare that dominated the 1980’s. A critical and financial failure upon release, Road House never really found its audience until the double threat of video rental and cable re-runs delivered it to an ever more appreciative audience. These days, Road House occupies in odd space in the larger world of film: both a joke and a thoroughly enjoyable romp, few movies define “crowd pleaser” more totally than this story of an out-of-town bouncer standing up against a rich bully with an entire town under his thumb. 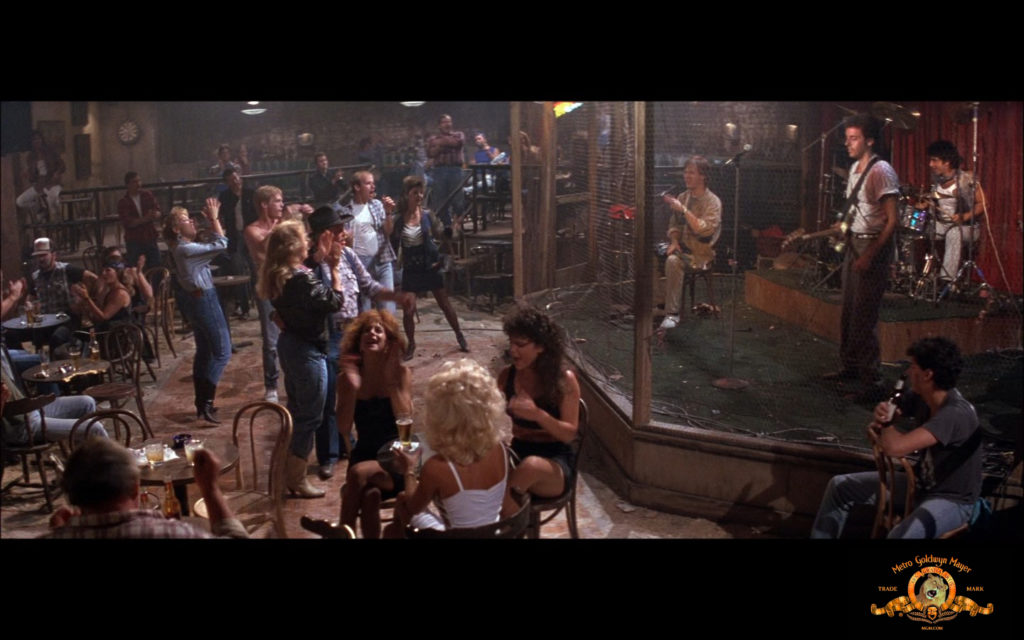 Director Rowdy Harrington’s second feature (after his debut writing and directing the underrated James Spader thriller Jack’s Back, which recently saw its own Blu-ray release) would end up being his most famous work despite its lack of initial success. As part of the first wave of Shout! Factory’s new Shout! Select imprint, Road House follows the same formula of many of their Scream Factory releases with a commitment to strong (and often new) visual and audio presentations of beloved films. With an MGM release from 2010 already on the HD market, how does Shout’s new treatment of Road House stack up? Let’s take a look. 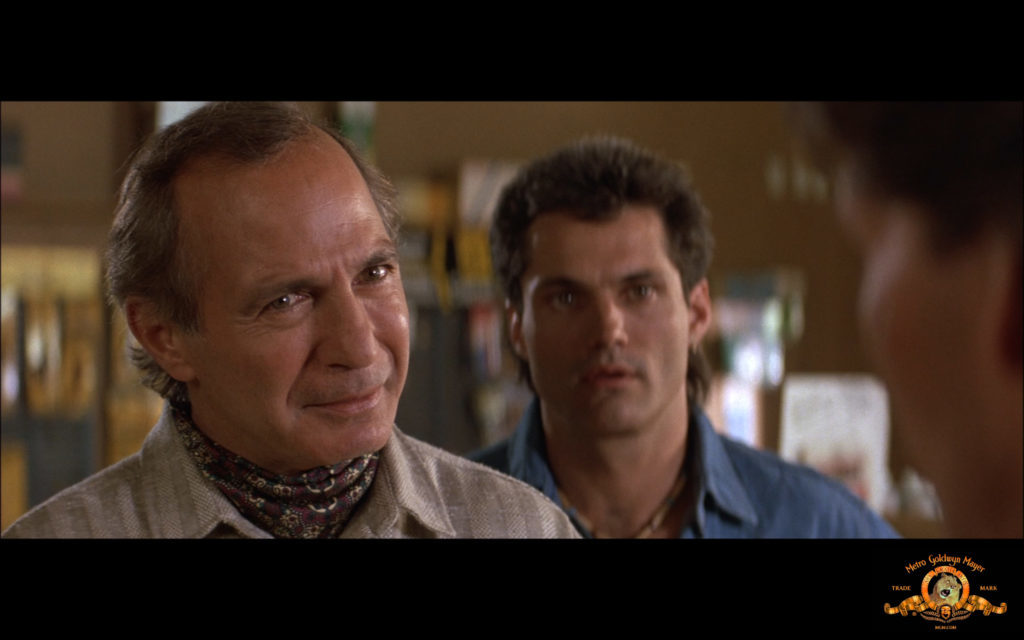 Bias rears its ugly heads folks: I love this movie. I’ve even got my old VHS copy prominently displayed with the rest of my more modern film collection. It’s the definition of a crowd pleaser: plenty of action, a solid leading man, appropriately evil and remorseless villain with plenty of goons and enough stakes to make the climax conclude with a real pay off. Patrick Swayze stars as Dalton, a philosopher, martial artist, and well-versed cooler: the man who keeps a bar orderly and under control. After accepting an offer to head to a troubled club looking to make itself respectable, Dalton crosses paths with the town’s vindictive power player, Brad Wesley (Ben Gazzara, hamming it up with the best of them). As Dalton begins working his magic on the nightclub, Wesley’s businesses start taking a hit, setting the two on a collision course complicated by the fact that Dalton’s new love interest (Kelly Lynch) is related to Wesley. With guest appearances from Keith David and Sam Elliott, you can’t go wrong with spending an evening with this film. There’s no small number of similarities here to standard tropes of a spaghetti western: an avenging out of towner, a dastardly rich man with an entire town under his thumb, a build up to climactic revenge and redemption, Road House borrows liberally and fundamentally from a rich tradition of films where the primary objective was for the audience to have a good time. On that front, few can argue that Road House heartily delivers. With Patrick Swayze at the top of his game, this film is free to let their star carry the film, but one can’t take anything away from Ben Gazzara who delivers an over-the-top performance rivalled perhaps by Ricardo Montalban in Star Trek II: The Wrath of Khan. 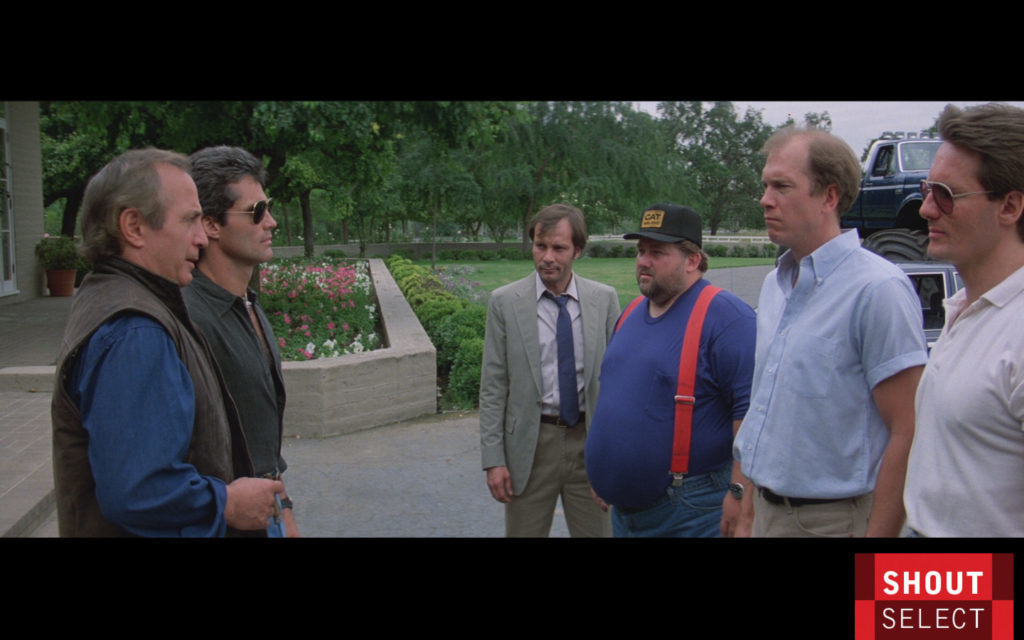 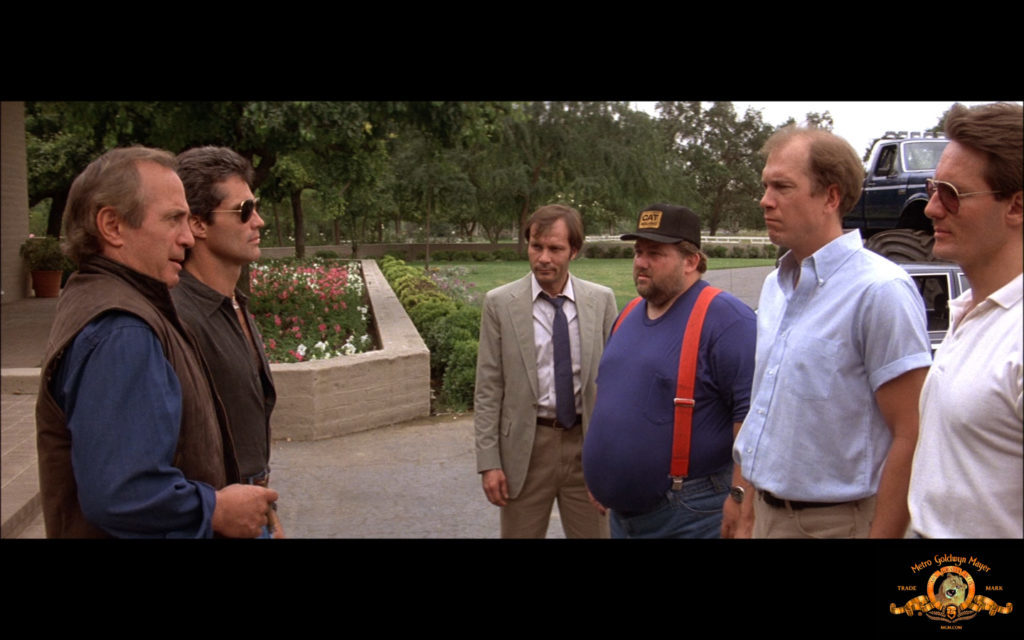 For this review, we have compared the visual presentation of the Shout! Select release with the previous Blu-ray edition, released by MGM in 2010. The new release from Shout! features a new 2k scan of the interpositive with supervision and approval from the film’s cinematographer Dean Cundey. As you can see from the stills, the new presentation features a more washed out presentation than what is seen on the MGM release. In addition, overall clarity and focus precision is markedly improved over the previous release. Close-ups and wide shots are sharper and the film as a whole appears far more sharp and coherent when compared with the MGM release. The trade-off goes both ways, however, as MGM’s release features a decidedly warmer palette with which to view the film. However, that warmer palette featured on the MGM release came at a trade off of overall precision within the print itself. With Cundey’s oversight, there’s little argument that can be made against the superiority of the clarity of the new Shout! Select release, but a case can be made for the richer color palette available on the MGM release. Conventional wisdom would say to defer to the cinematographer’s choice, but I continually find myself second-guessing the more bleached out look of the new scan, especially on close-ups. It really comes down to the viewer’s preference. 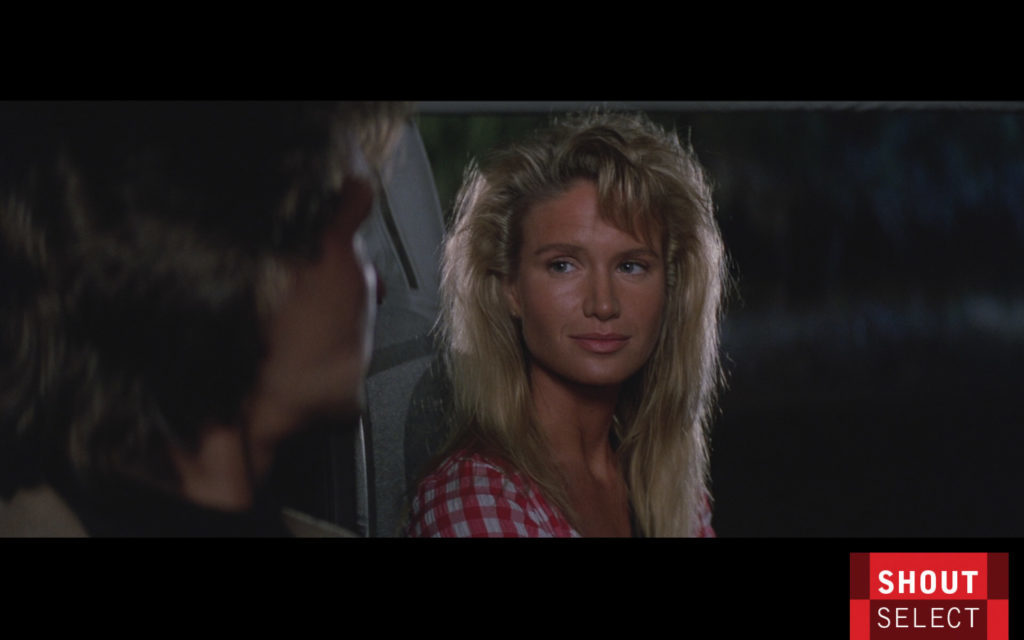 Once again, Shout delivers solid choices for the viewer to select from. On this release, we’re able to choose between a DTS-HD 5.1 surround mix or a more traditional Stereo option. Unlike the difficult choice posed by the visuals between the Shout! and MGM release, the audio presentation on the Shout! Select disc is worlds ahead of its predecessor on both tracks. The 5.1 surround mix is very impressive with a bold presentation that is fully immersive. The soundtrack and ambient noise wraps around the viewer without overwhelming an individual channel, allowing the viewer to feel like they’ve just taken a seat at the Double Deuce themselves. Conversations are clear and centered and the mix as a whole is well-balanced. The same praise can be delivered to the stereo mix. While the full surround experience is definitely lessened, it’s clear that a lot of care went into making sure each of the constituent parts of the mix work well together. 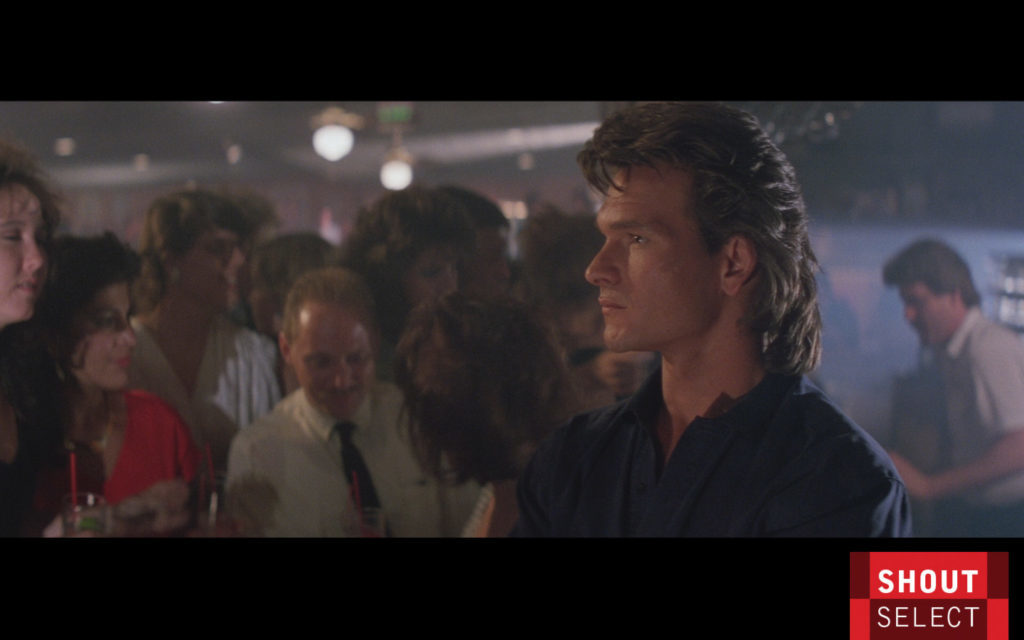 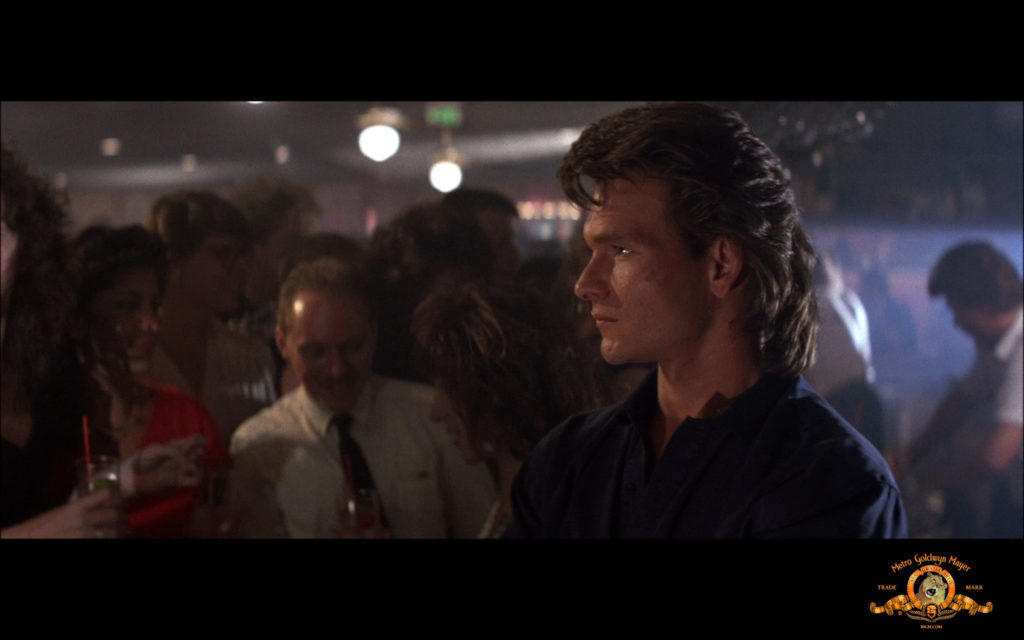 The Packaging and Extras: 4/5 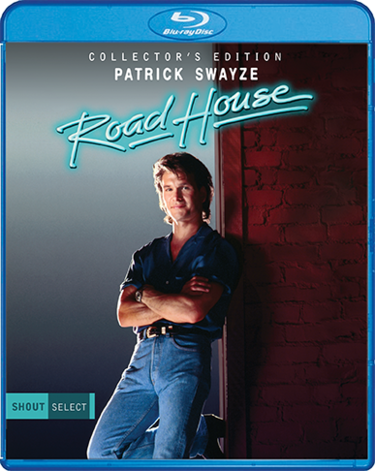 Road House arrives on Shout! Factory’s new Shout! Select imprint on two BD-50 discs with an impressive array of special features, both new and old, in a pleasing if somewhat plain case. In contrast to The Adventures of Buckaroo Banzai Across the 8th Dimension! which featured a slipcase and reversible cover, Road House ships to consumers in a far less ostentatious case with no slipcover, no new artwork commissioned for the release, and no reversible inside cover. It’s an odd choice considering Shout! Factory and it’s Scream Factory imprint are renowned for their slipcover art and reversible inside covers. However, the contents of the discs themselves are mighty impressive. Shout! has delivered a staggering number of new featurettes and mini-documentaries with interviews with nearly everyone involved in the film with the exceptions of Patrick Swayze and Ben Gazzara, both sadly deceased. The featurettes on the stunts and music of the film are especially engrossing, but the whole range of new material is fantastic. In addition, previously available interviews that include Swayze and Gazzara are on disc two, rounding out a staggering number of cast and crew voices available for the curious viewer. The only omission one could crow for is for Shout to include Mike Nelson’s Rifftrax presentation on Road House which would have made this set one in a million. From Shout! Factory’s database: 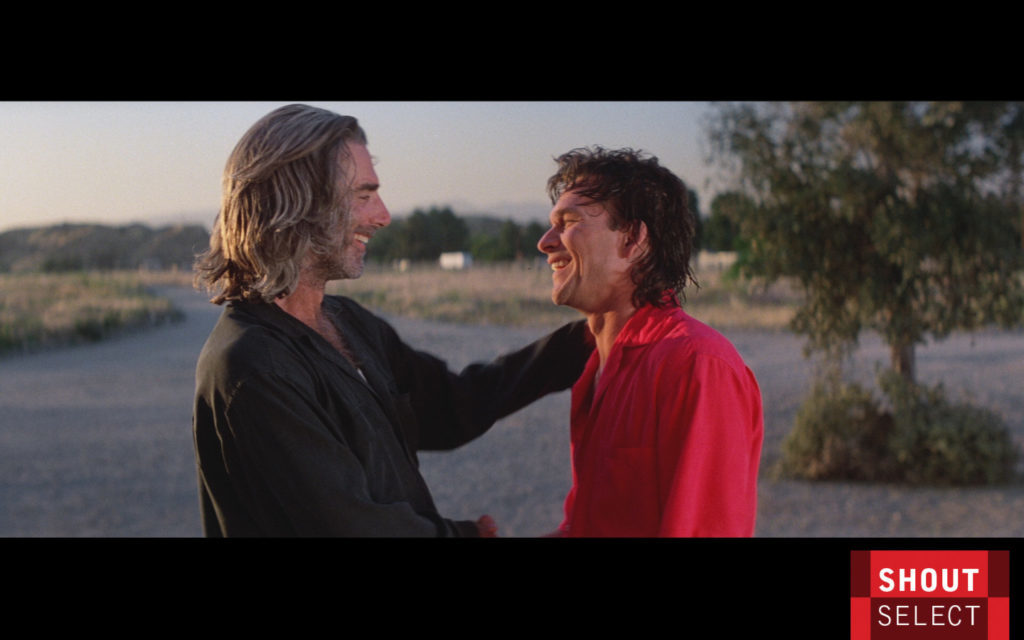 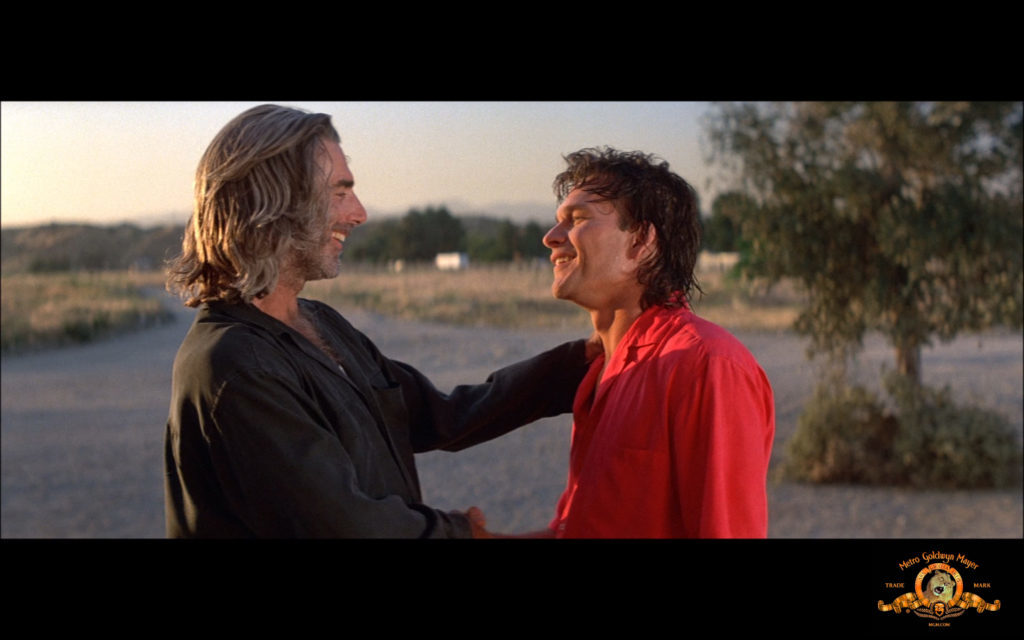 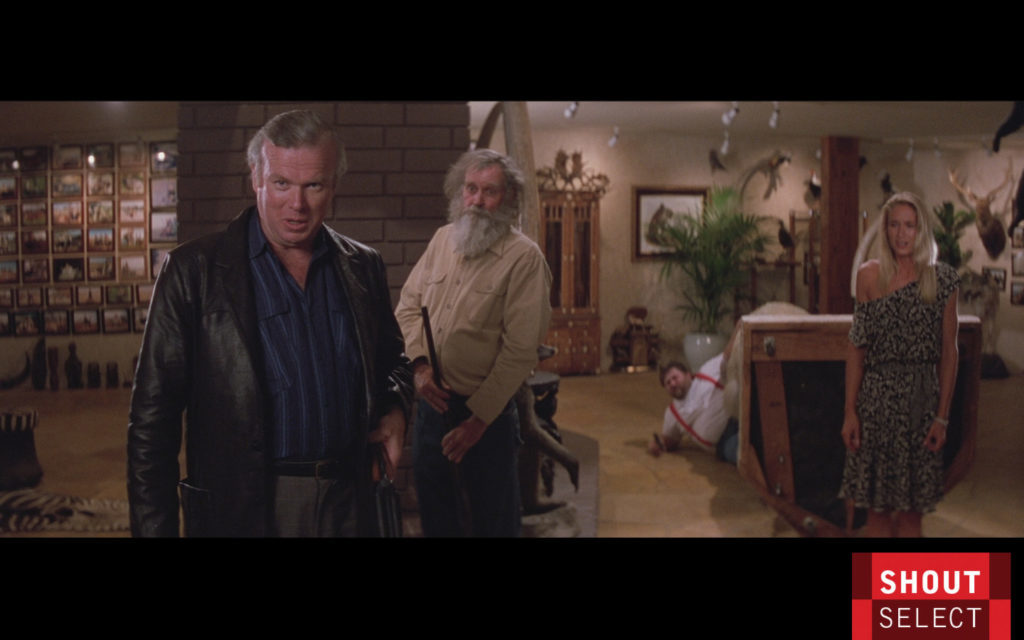 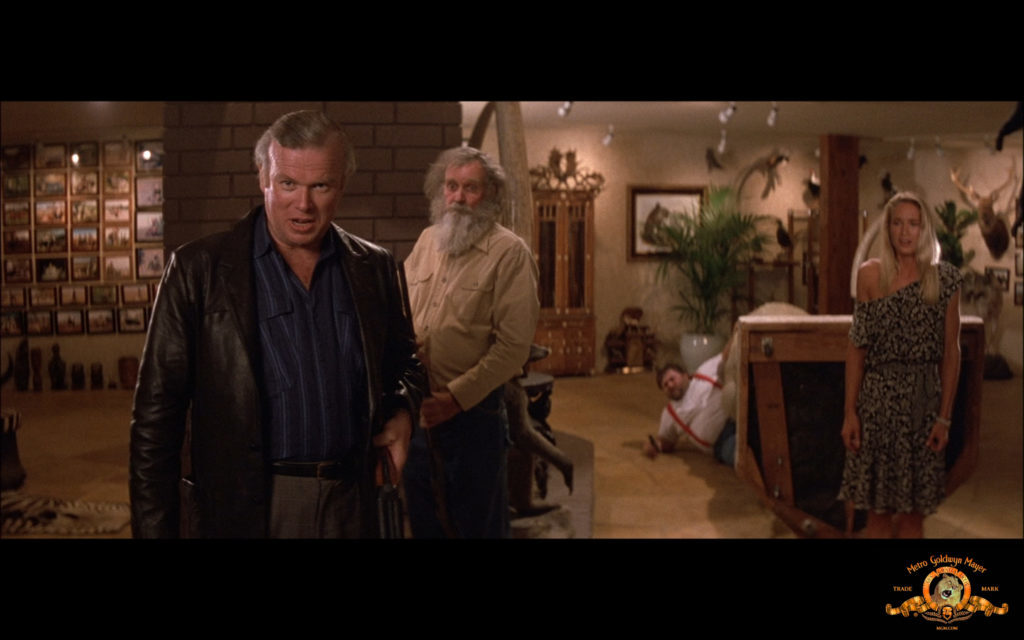 Road House is a legendary film, if for all the wrong reasons. Overlooked during its debut, few films have managed to capture the attention of such a wide number of viewers. Between its decades long residency on TNT in regular rotation to its praises being sung by entertainers from all walks of life, Road House is the sort of film that demands viewers to pay attention. It’s simple, blunt, and undeniably fun and I find myself putting it back into my player time and time again over the years. Shout! Select’s presentation is very impressive, but the visual changes from the MGM release are likely to divide some viewers. As stated in the video discussion, the MGM release features a deeper and more varied color palette, but the new release from Shout! features a great improvement to focus and clarity and comes with the cinematographer’s seal of approval. Between those improvements, the wonderful new audio mixes, and the fantastic array of new featurettes, this release is definitely a winner. If you own the MGM Blu-ray and find yourself never putting it in, then you may be fine with passing on this release. However, if you’re like me and you’re looking for any excuse to swing by the Double Deuce and check in on Dalton, this release is a winner. Remember: pain don’t hurt.