The Rizen could have risen more.

This review may contain spoilers.

The Rizen is a science-fiction horror from Lost Eye Films that follows the story of several survivors of what appears at first glance, to be some fashion of zombie outbreak, but slowly reveals to more occult in nature as the film trudges along. 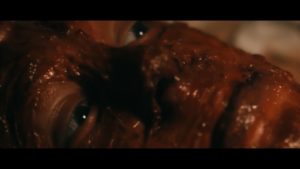 A sample of the bloody makeup on someone who had recently had their face devoured.

There were moments that I thought “wait, this film might actually be getting interesting” but unfortunately most of those moments were towards the end, and most of them actually led the plot nowhere particularly exciting.  All of the fight scenes were uninspiring and full of clichés, and at least 80% of this film was set in the same dull, stone cold, grey corridor that seemed to just get recycled for every other scene, with a slightly different ensemble of props, if there were any at all.  All of this culminates in a very boring viewing spectacle, something to make your eyes physically tired from watching, the breakaways from the monotone setting were few, short and thoroughly un-engaging.  A low budget can be forgiven, but a low imagination and ambition cannot.

Credit where it is due though, the camerawork was probably the best part of the entire feature, the angles and panning definitely added to the experience, as well as the audio effects; the sound from the actors were clear and concise and I was always aware of what they were doing and saying throughout.  Not to forget the makeup for the monsters in question, in fact, I was quite fond of the entire conception of the beasts.  While the makeup isn’t perfect, it is certainly enough to make you feel uneasy, and the sounds coming from them, this strange clicking, instills terror.  The clicking is what I assume to be some method of echolocation, a la ‘The Last of Us’, a video game from 2013.  The stomping, squishing and blood splattering is definitely something to note, as it sounded absolutely vile; big props (pun intended) to the sound and makeup teams for them making the film much more bearable.

The Rizen is now available from Uncork’d Entertainment on VOD. 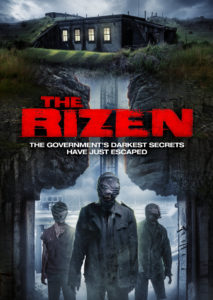 All in all, I don’t know what could be done to save this film, I think if it only had a few more interesting backdrops, a more clear direction in what they want their story to actually be, because even having watched it thoroughly I am still unsure what it’s trying to do, what with the unexpected Cthulu monster devouring Earth out of nowhere at the end, resulting in all our lead character, Frances'(Laura Swift) efforts to be totally in vein.

Honestly, it isn’t a great film.  There are worse films out there for sure, but I feel this one had a lot more potential than it delivered on.