Ready Player One is a 2018 American science fiction adventure film that was produced and directed by Steven Spielberg, and written by Zak Penn and Ernest Cline, and is based on Cline’s 2011 novel of the same name. The film features Tye Sheridan, Olivia Cookie, Ben, Mendelsohn, Lena Waithe, T.J. Miller, Simon Pegg, and Mark Rylance.

The film takes place in 2045, when much of humanity uses the virtual reality software OASIS to escape the desolation of the real world. Orphaned teenager Wade Watts (Sheridan) discovers clues to a hidden game within the program that promises the winner full ownership of the OASIS, and joins several allies to try and complete the game before a large company that’s run by businessman Nolan Sorrento (Mendelsohn) can do so.

Ready Player One premiered at South by Southwest on March 11, 2018, and theatrically released by Warner Bros. Pictures in the United States on March 29, 2018, in 2D, Real D 3D, IMAX, and IMAX 3D. It grossed $582 million worldwide, making it the sixth-highest-grossing film of 2018. Overall, the film received positive reviews from critics, with praise directed toward the visuals, brisk pacing, and Rylance’s performance. The film was noted to have significant differences from the book, with some critics calling the film’s plot an overall improvement over the source material.

Ready Player One is a movie, that once I heard was being made, I knew that I would have wanted to check out; if at least for the various elements of nostalgia that were presented from my childhood.  Providing audiences with a very nicely done thrill ride that really captures Spielberg’s strengths, it lets audiences explore the adventure that it really sets out to tell.  There are a lot of elements to this movie that it really makes it difficult to properly relay the experience.  It’s been quoted as being more of an “overstuffed cultural recycling bin”, but the fact that the world of the OASIS exists in the dystopian world that it takes place in, really gives its audiences a nice opportunity to escape reality too.  It’s packed to the brim with amusement from start to finish, that I really think that if you too were a product of the mid-to-late 80s or 90s, you too will find this movie to be enjoyable too. 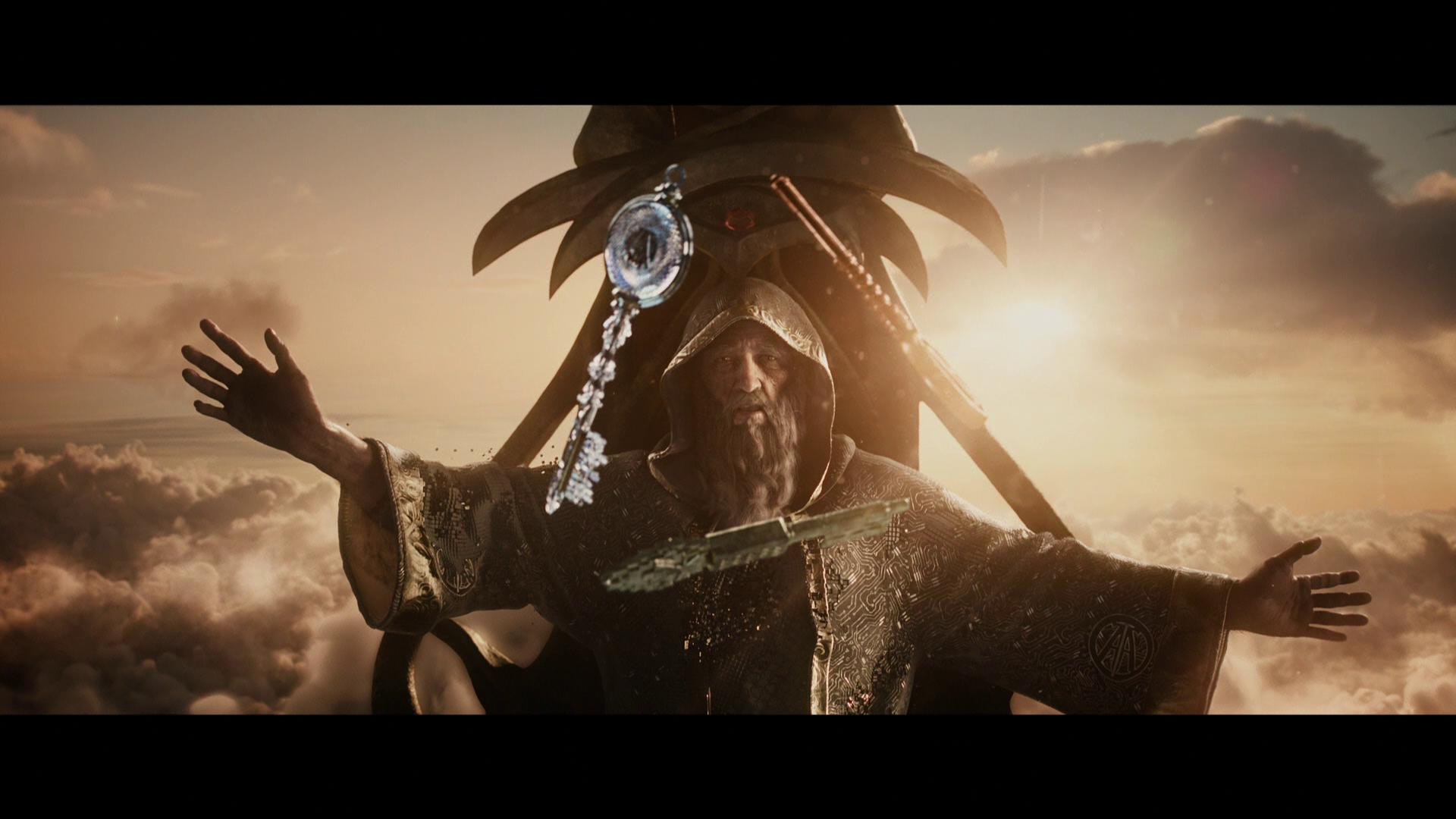 The Blu-ray release of Ready Player One absolutely shines on home theater setups.  Even though it doesn’t offer the nice wide range of color options as the 4K UHD release would, this movie provides audiences an extremely colorful look into the imagination and video game world that was created in this fictional story.  Boasting several bright colors that were notorious in the late 1980s and 1990s, this movie was simply jaw-droppingly beautiful as it played on my living room television.  The CGI that was used for the in-game elements were nicely done enough to make the animation feel significantly lifelike and it allows for the audience to really feel as if they too were part of the video game.

I was surprised to see that Ready Player One was packaged with a DTS-HD Master Audio 5.1 mix, especially with the overall presentation that was attempted with this movie.  Personally speaking, I would have thought that this movie would have been bundled with either an Atmos or DTS:X mix.  However, despite its inclusion of the surround channels, the transitions between the front and rear channels really did a nice job at putting my wife and I right into the middle of everything and offering an all out immersive experience.  The volume levels did not require any sort of increase in volume because of their choice to go with the 5.1 mix, and the overall experience was absolutely phenomenal.  The dialogue is cleanly presented, and really does a great job at making sure that the characters are heard and understood without any issue.

The Blu-ray release of Ready Player One comes packaged in your standard two-disc Blu-ray amaray case.  Within the case is the standard Blu-ray copy of the movie as well as the standard DVD.  Neither of the discs feature any artwork that’s related to the movie outside of the standard release text and solid colored background.  There is also a digital copy redemption pamphlet that’s been included for the various streaming options as well as a slipcover that features the same piece of artwork that’s been provided on the case art that’s been made available during the original pressing of the release. 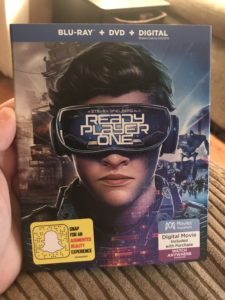 There are some really extensive features included with the Blu-ray release of Ready Player One.  The content that was included not only offers a nice look into the story, but a look into the work that went into the film as well as some aspects of the original story line from which the film was adapted from.  There is also one feature that I absolutely loved and that was the one that really explored the audible Easter eggs that were placed throughout the film that’s really making me want to go back and re-watch it to see if I catch them.  Included with this release is: 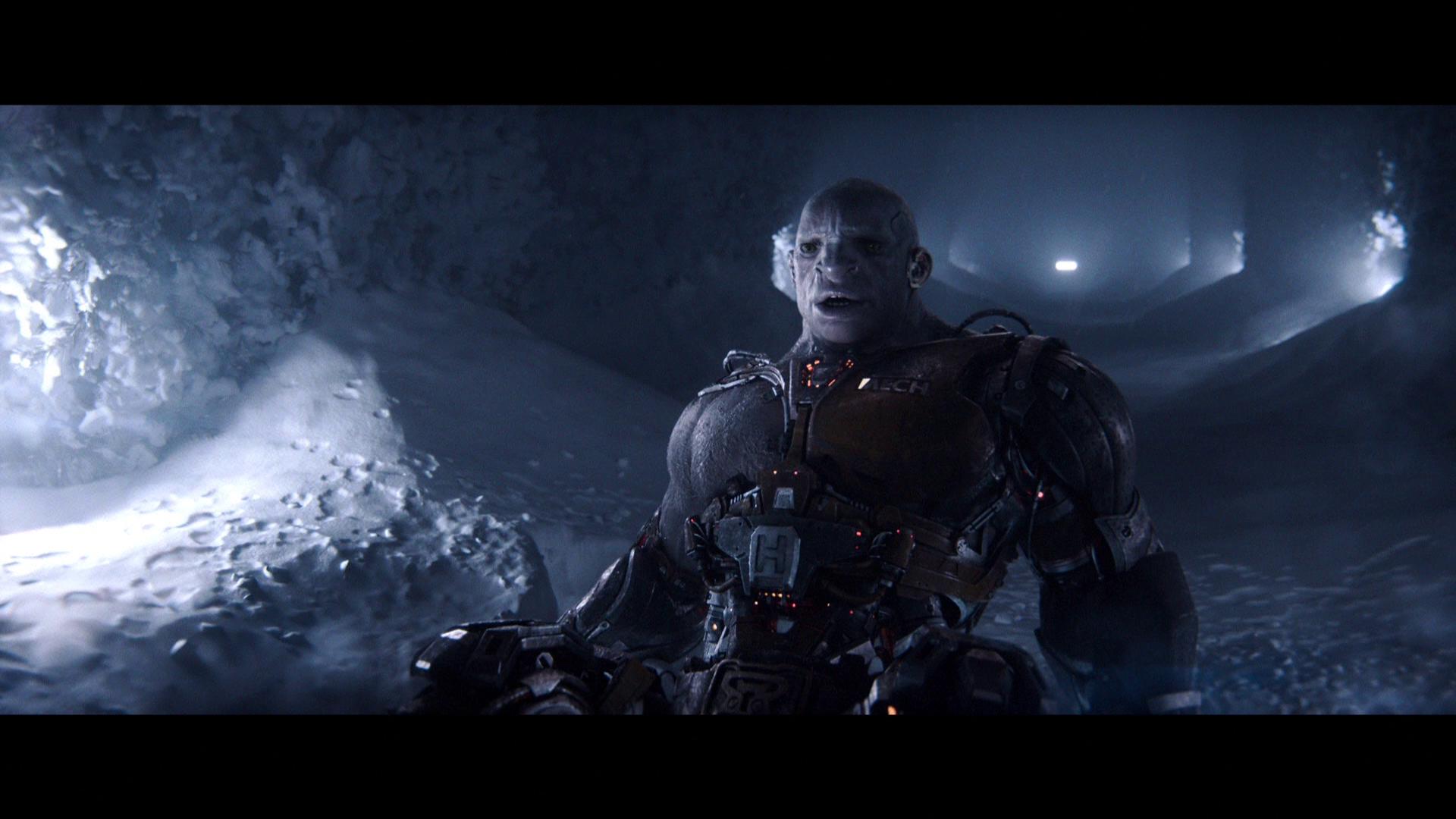 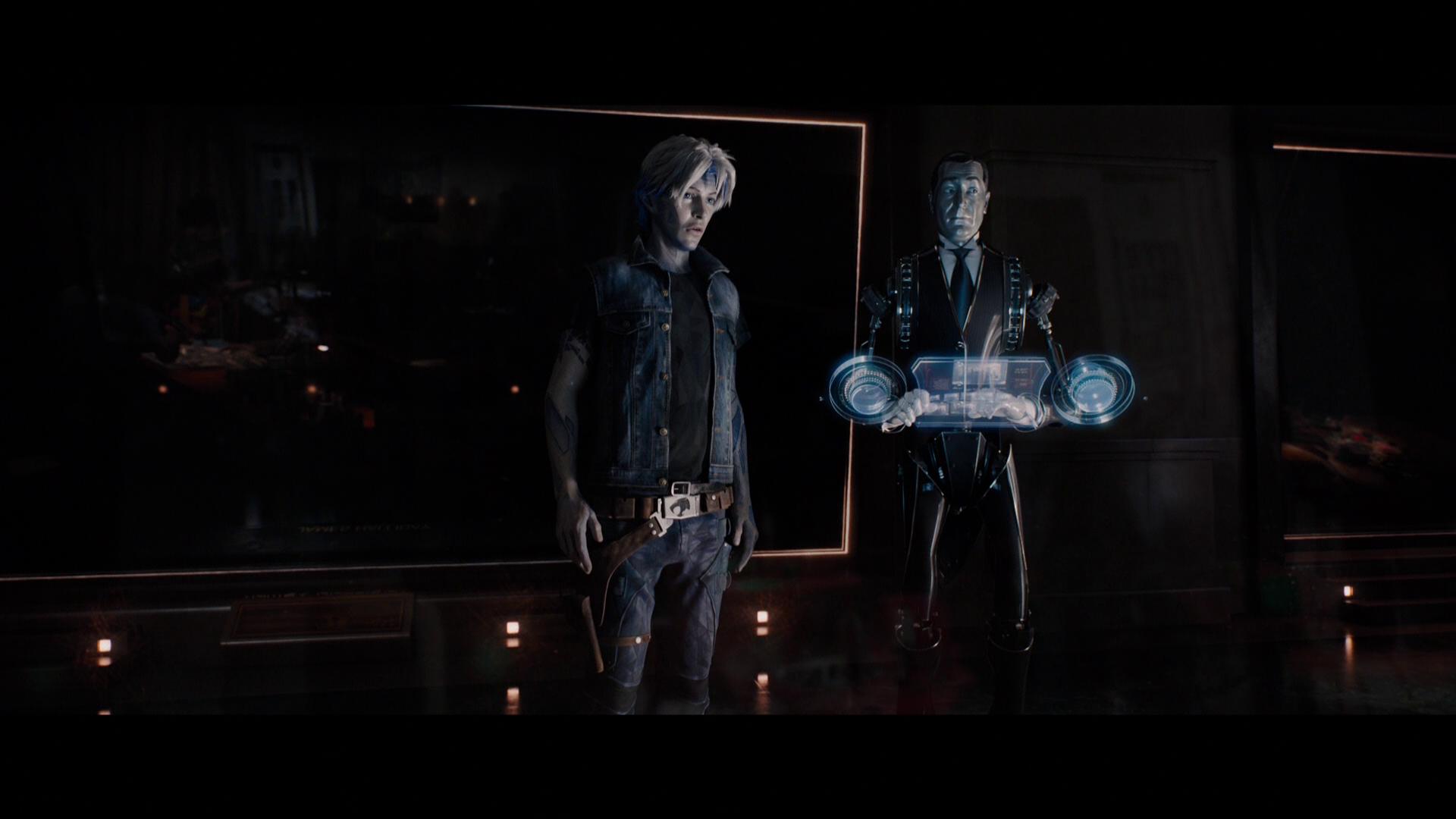 I absolutely loved watching Ready Player One.  Not only did I find the story enjoyable; but, the overall experience and sense of adventure that was provided was one that I loved.  The video and audio presentation of the Blu-ray release was absolutely phenomenal, and after watching through this, I think I want to check out the 4K UHD release at some point because I can only imagine how much this release shines with HDR.  The special features are really extensive and should be explored by anyone and everyone who picks this release up.  If you’re considering grabbing this release for your collection, I would hands down recommend picking up the 4K UHD release.  Even if you don’t have a 4K TV or player, it does come packaged with the Blu-ray release and will put you one step closer to having something ready to watch when you do eventually upgrade your setup for 4K UHD.  Ready Player One will be available on 4K UHD, 3D-Blu-ray, and Blu-ray beginning on Tuesday, July 24, 2018. 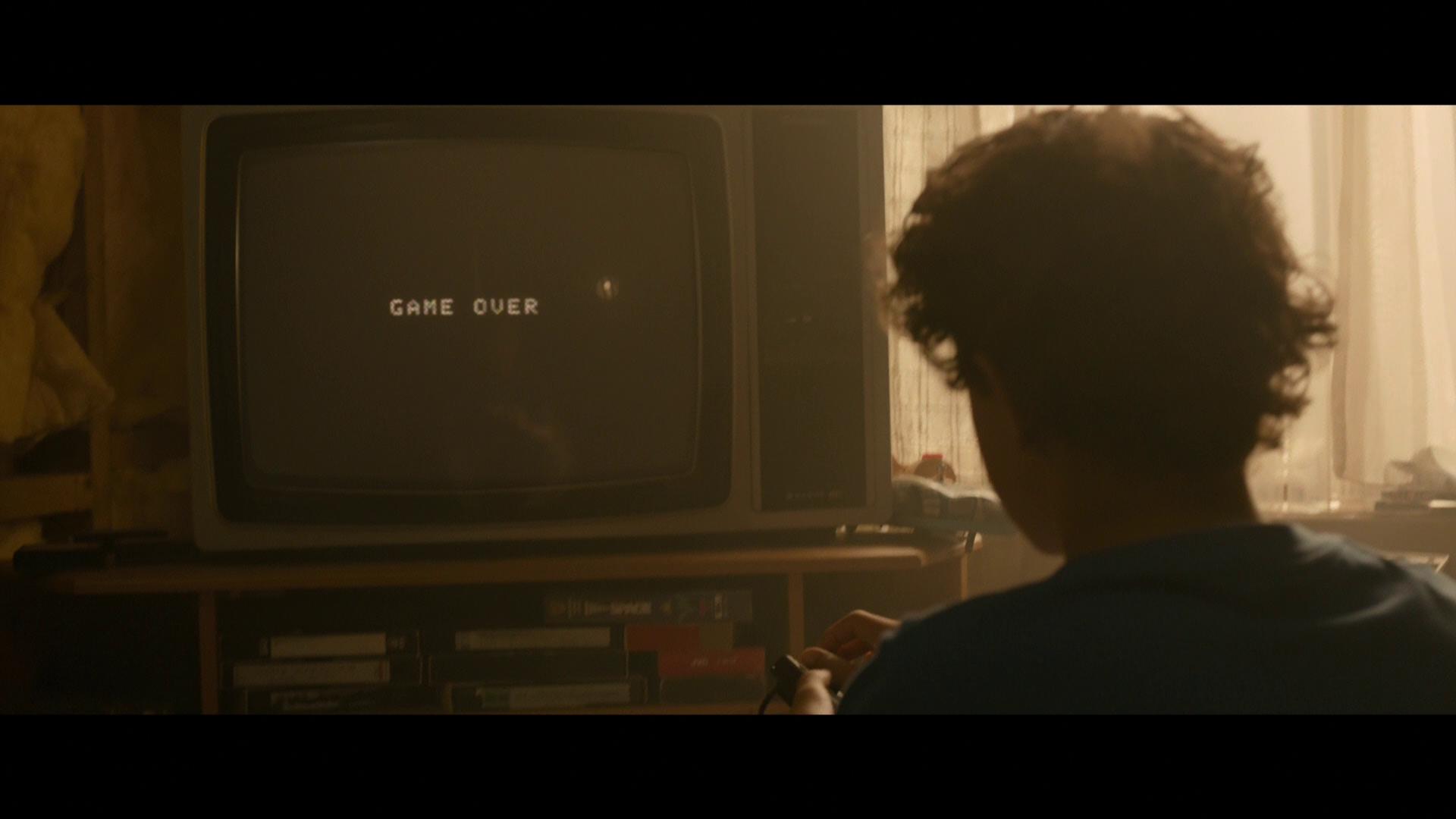