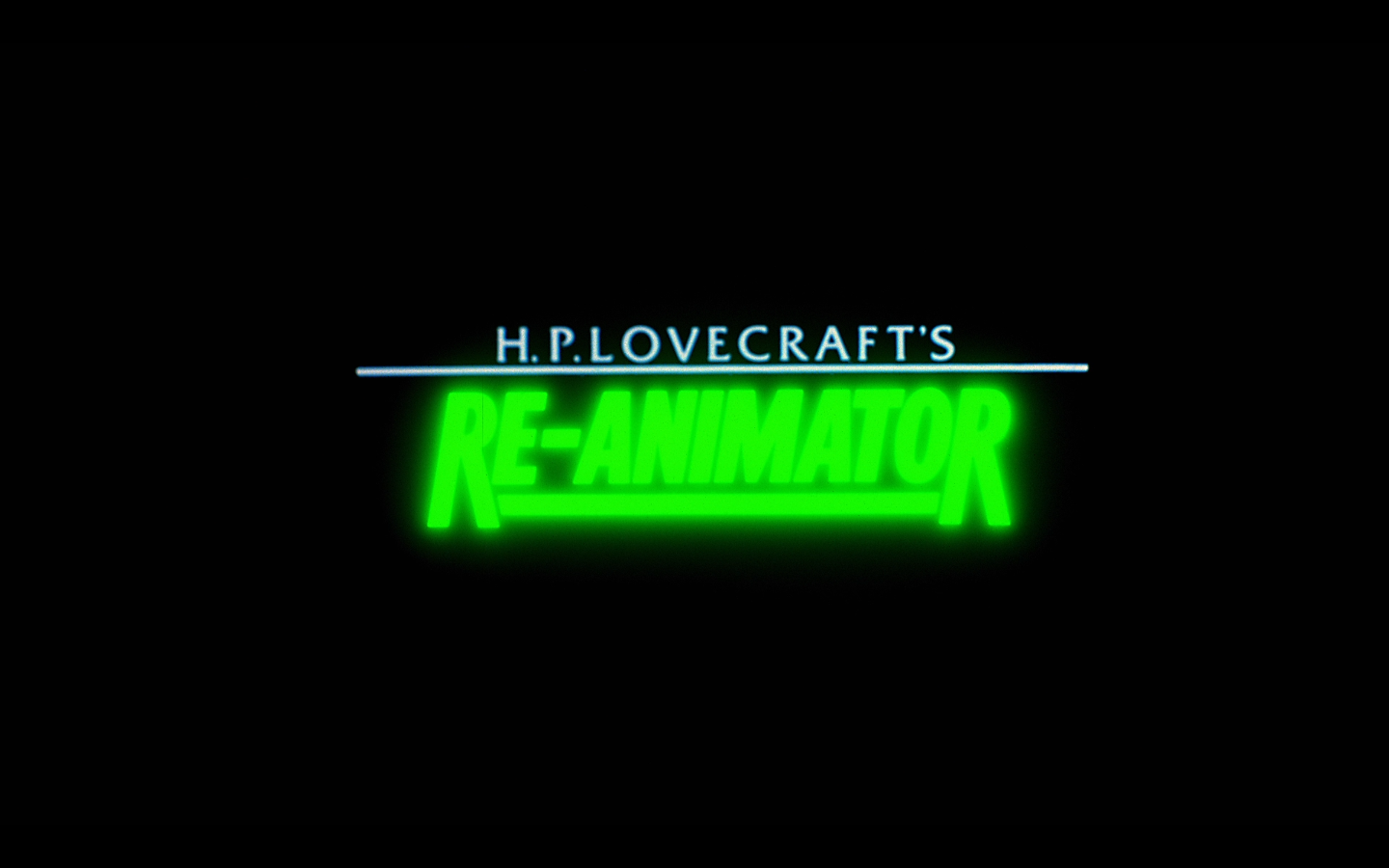 The last 5-8 years has seen an explosion in interest in the works and universe created by H.P. Lovecraft, a writer who during his own lifetime languished in obscurity and, depending on who you asked, either reveled in or eventually overcame the racism which surfaced in some of his work. Signs of Lovecraft’s influence permeate throughout science fiction and horror since his work first became popular in the pulp pages handed out to soldiers during World War II. John Carpenter regularly used Lovecraftian themes in his films, most notably in The Thing, Prince of Darkness, and In The Mouth of Madness, as have a wealth of other directors ranging from Guillermo del Toro to Martin Scorsese, but the stories themselves have a very spotty history of reaching the silver screen with their themes and atmosphere intact. In fact, true film adaptations of Lovecraft stories are largely the purview of aspiring film students and B-movie auteurs. Of those who have adapted the celebrated author’s work, none stand taller than director Stuart Gordon. 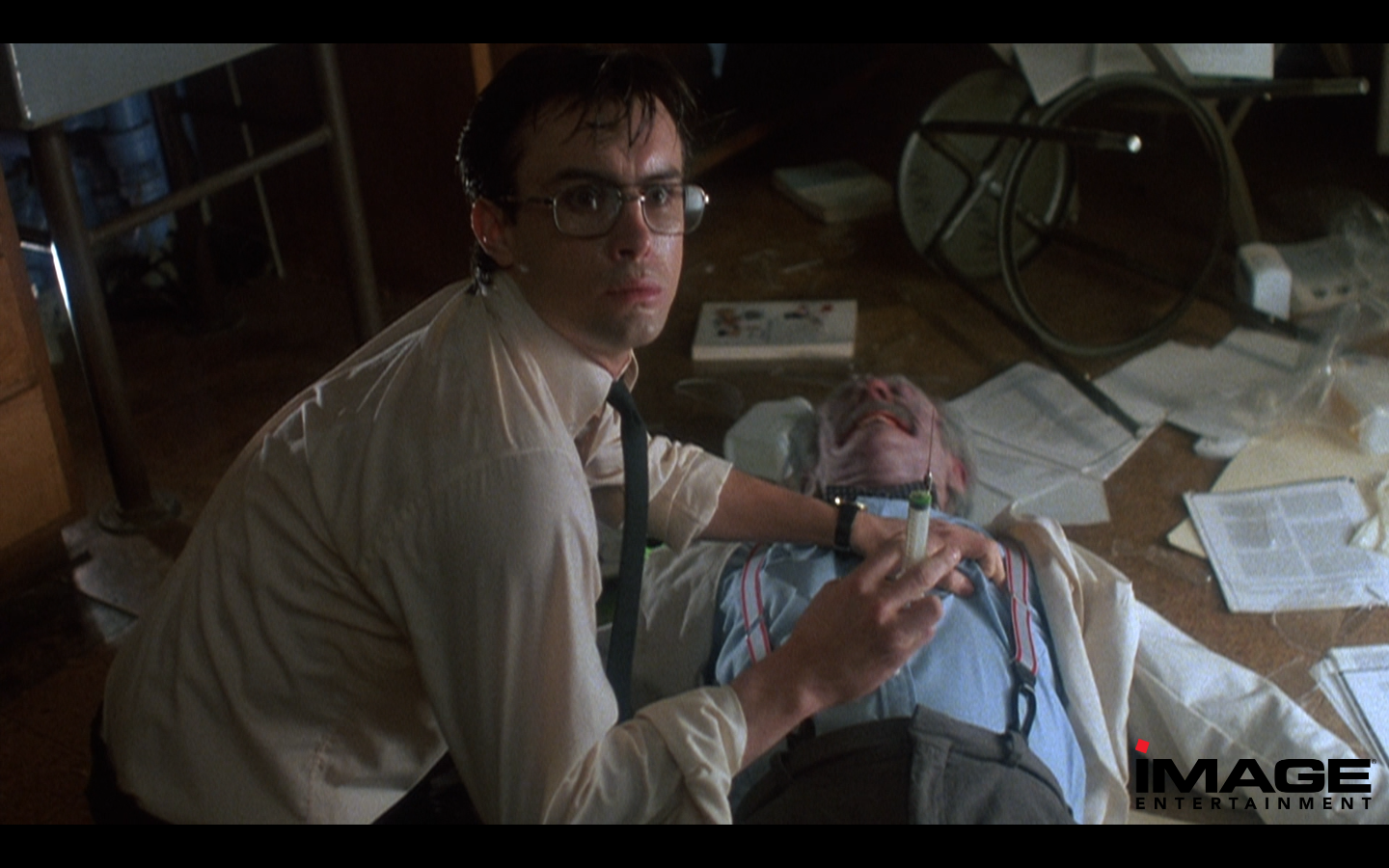 This capture is taken from the 2012 Image Entertainment release.

This capture is taken from the 2017 Arrow Video re-master release.

Stuart Gordon has brought Lovecraft stories to life many times over the years with his three feature films (Re-Animator, From Beyond, and Dagon) being the most celebrated of the adaptations, and for good reason. However, Gordon’s second directorial effort is also far and away his most beloved. Released in 1985, the $900,000 film was rated “X” during it’s theatrical run but still managed to more than double it’s cost in ticket sales. Critics were also universally kind, and by the time the film hit video stores, it had managed to negotiate a cut to be scored with an “R” rating, opening up the floodgates for the rabid horror home video fanbase. Re-Animator found its legions of fans in those late night screenings around a fuzzy television, where the humor, gore effects, and striking performances from icons Jeffrey Combs and Barbara Crampton brought friends together with laughs and shrieks. Since the transition of home media to DVD and beyond, Re-Animator has cycled through numerous releases both of its director preferred unrated cut and the far rarer “integral” cut, highly sought after by fans for its blending and rearranging of scenes from both the R-rated and unrated cuts of the film. Many of these previous releases have been of dubious audio and visual quality, although up to this point the Image Entertainment Blu-ray from 2012 was the gold standard. Now, Arrow Video brings what many devotees hope to be the final word in the film’s long life on home video shelves with this special edition release touting a 4k re-master. How does this one stack up against the previous Blu-ray release? Let’s take a look. 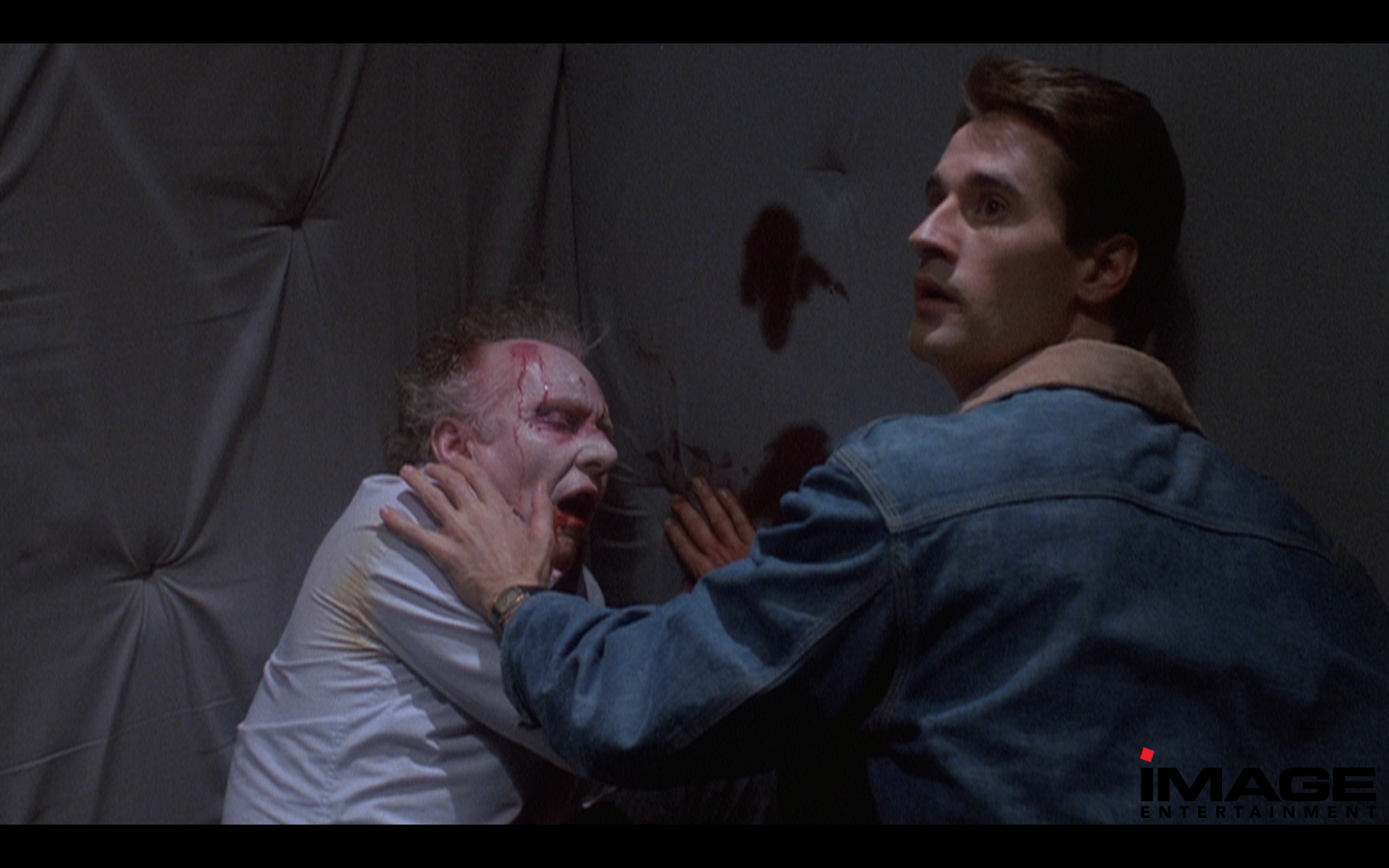 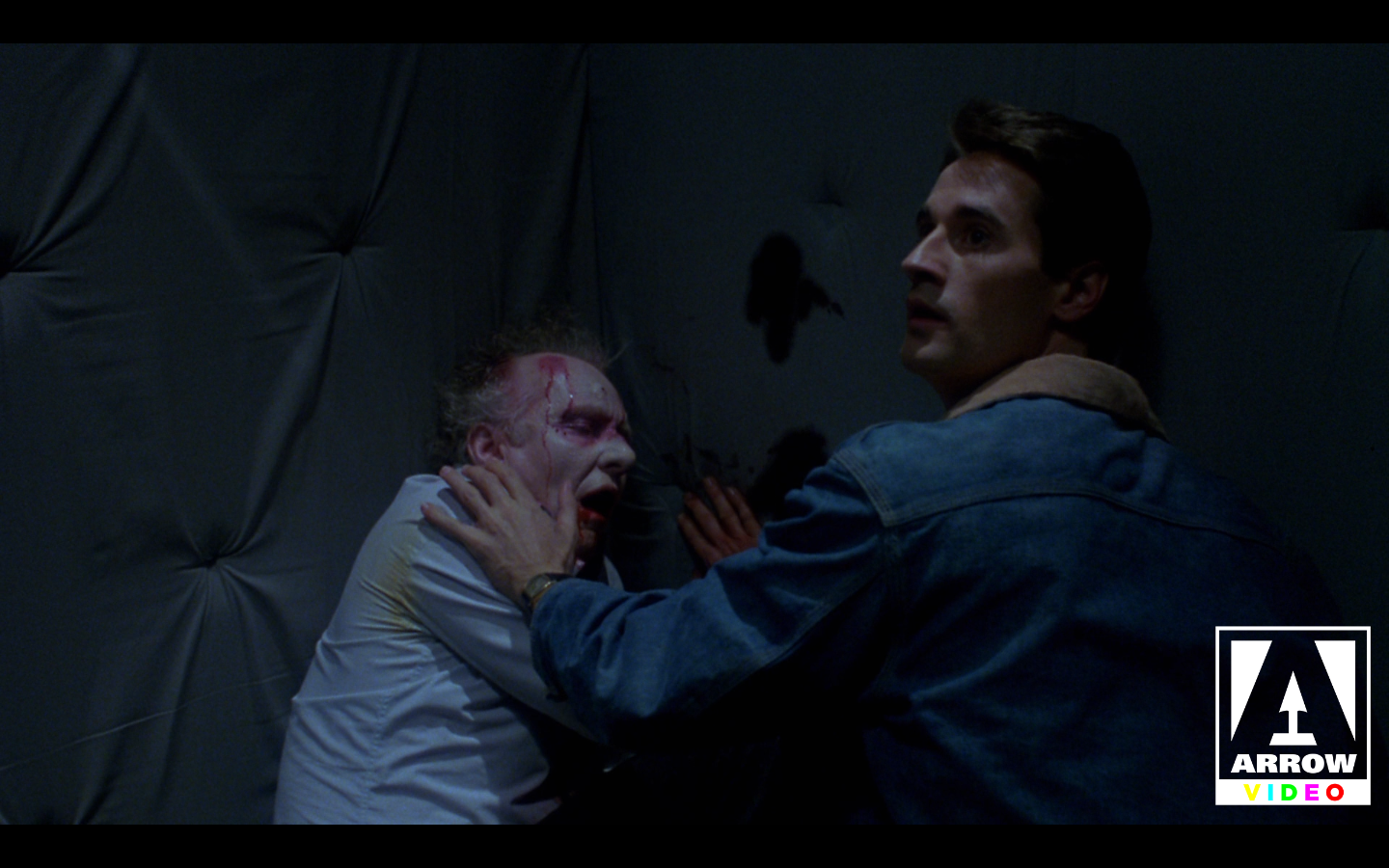 To be blunt: Re-Animator is a masterpiece. It is the horror/comedy hybrid against which all others must be judged. Gordon deftly directs a talented cast to bring to life Lovecraft’s rare attempt at humor, not only honoring the story that inspires the film but elevating it into B-movie heaven. Dr. Herbert West (Jeffrey Combs in the defining role of his storied career) is a man obsessed with a single goal: overcoming death. Kicked out of his latest school after a disastrous experiment on a colleague with his prototype “Re-Agent” serum, West finds his way to Miskatonic University in New England to continue his research, renting a room from fellow med student Dan Cain (Bruce Abbott playing a perfect understated foil to Combs’ manic energy) who is deeply in love with girlfriend Megan Halsey (Barbara Crampton needs no introduction). West’s research soon sucks in Cain and the two begin a new round of re-animation experiments, drawing the attention of Dr. Carl Hill (David Gale) who seeks to co-opt West’s breakthrough as his own. As the body count rises (and rises again), West will confront the fruits of his labor in a final showdown with Dr. Hill. 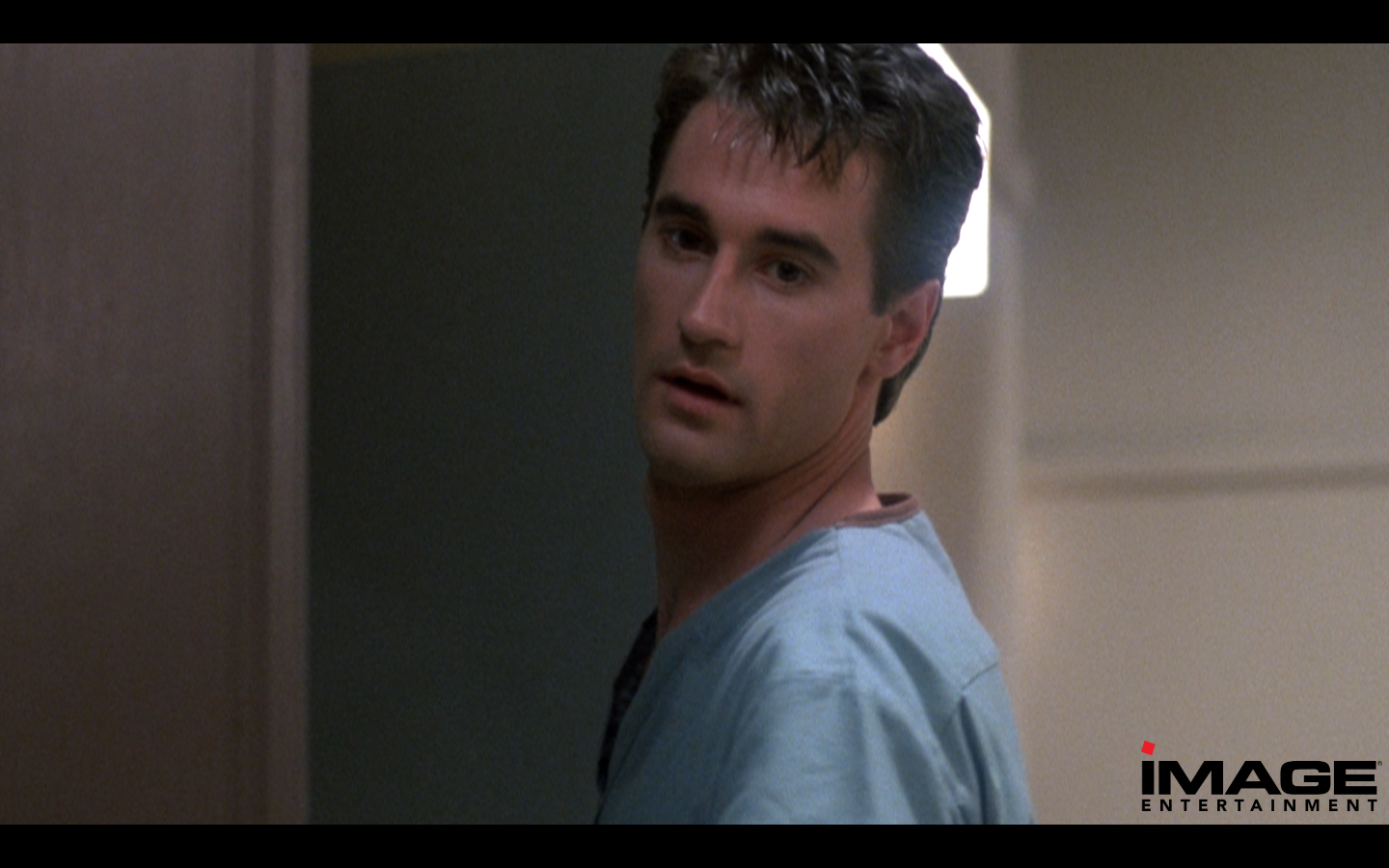 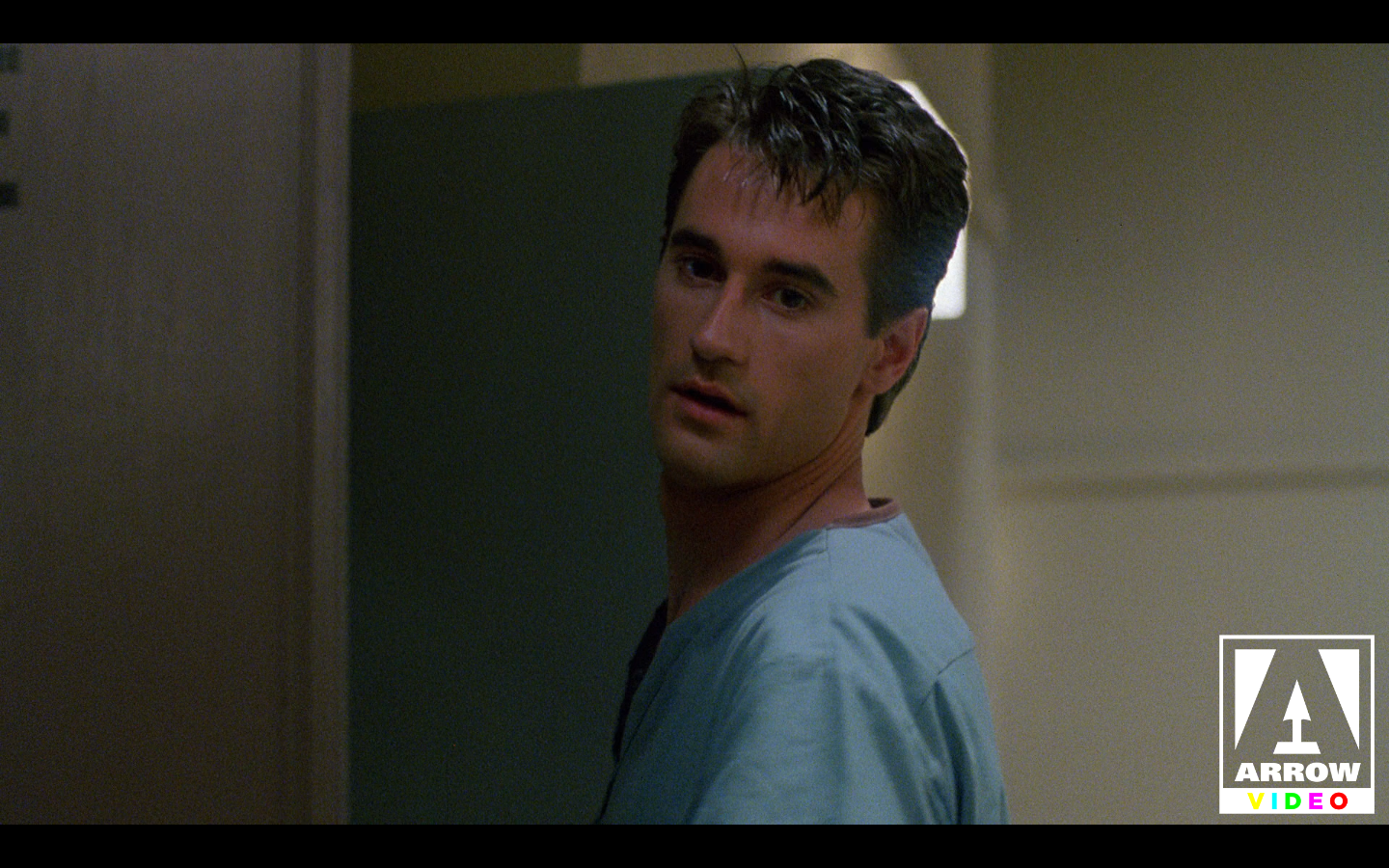 This is it, folks. This is the real deal. Arrow commissioned TLEFilms to produce a new 4k scan from both the original 35mm negative and interpositive to construct both the unrated and “integral” cuts of the film presented in this release. Extensive digital repair and restoration followed to address numerous problems arising from the source prints, including photochemical damage/irregularities and various scratches and dirt. Further, extensive color correction was also completed by the same lab through a 2k imaging process. The results, as you’re able to see from the screenshots, show a robust clarity and depth that is missing from Image’s strong 2012 release. Where previous releases, including the Image release, relied on a bright and almost blown-out color palette, the Arrow release hews in the other direction, favoring a far deeper and richer palette that accentuates many of the films more dramatic scenes. Paired with the deeper contrast and strengthened blacks, the color palette feels natural and complimentary to the increased precision in each shot, most notably in close-ups. Light sources are less diffuse and far more constrained which is of particular note in this release as the green glow of the re-agent often rendered the syringes that contained it into amorphous blobs. I exclaimed loudly multiple times during my viewings of both cuts due to the marked improvement on the visuals from previous presentations. 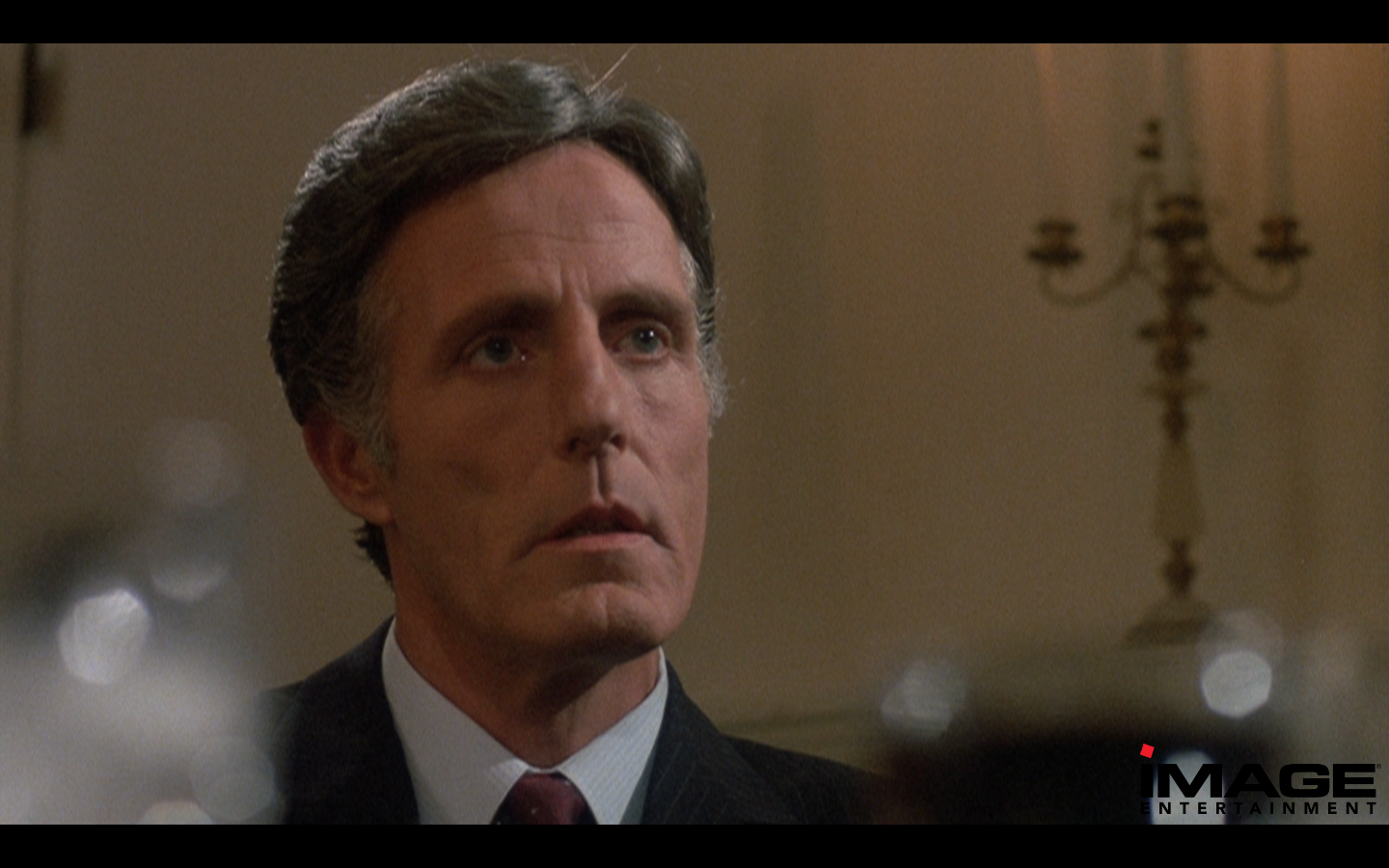 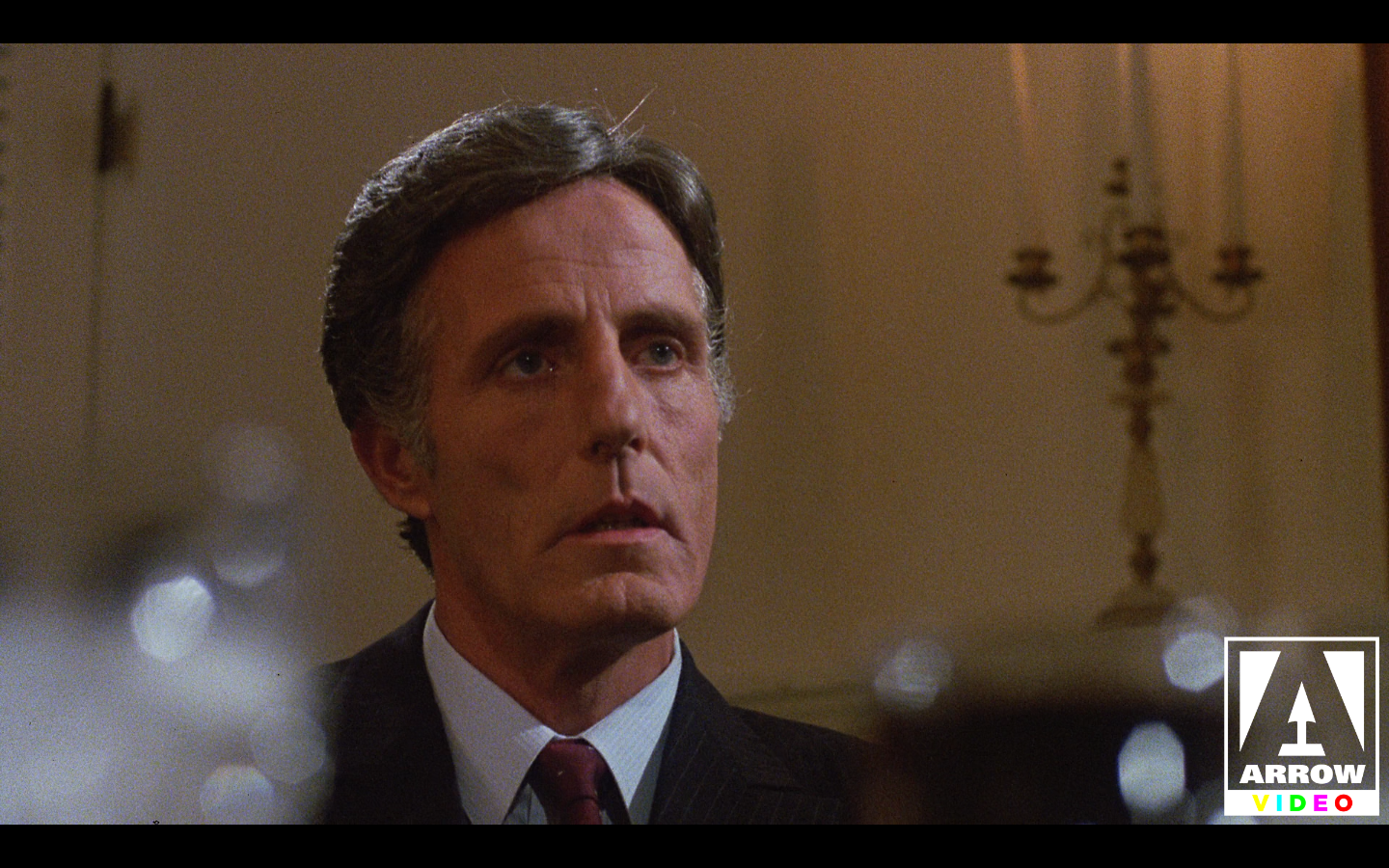 Unlike the strong visuals from the previous Image release, the audio options from that edition were less noteworthy. Beyond the standard mono track, a DTS-HD 5.1 mix had been commissioned. However, it was strongly front-loaded and failed to take advantage of the full dynamic range available. Like the visuals, a brand new audio mix was pieced together from the original 3-track magnetic reel for this release. The unrated cut, the version with which most are familiar and is preferred by the director, comes with your selection of the original mono track, as well as new stereo and DTS-HD 5.1 surround mixes. The “integral” cut features a similar 5.1 mix using, near as one can tell, the same elements from the unrated where appropriate. While both the mono and stereo mix are balanced and satisfactory, it is the new surround mix that is the star of the show here. Dialogue remains as crisp as it was in the earlier Image release, but the dynamic range is utilized to far greater effect. With plenty of scenes of mayhem paired with the infamous score, it was a thrill to take in this film in frantic surround sound. 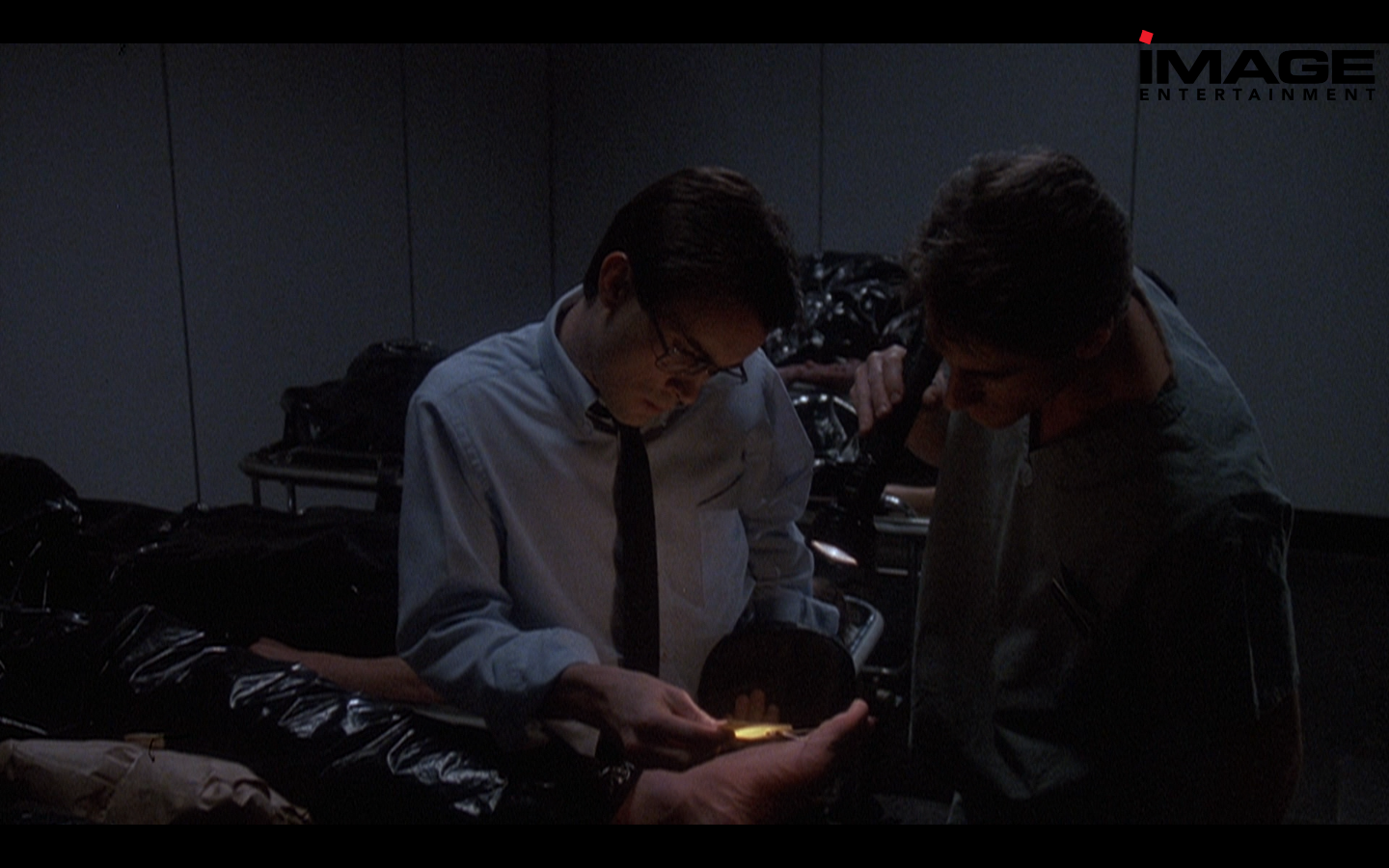 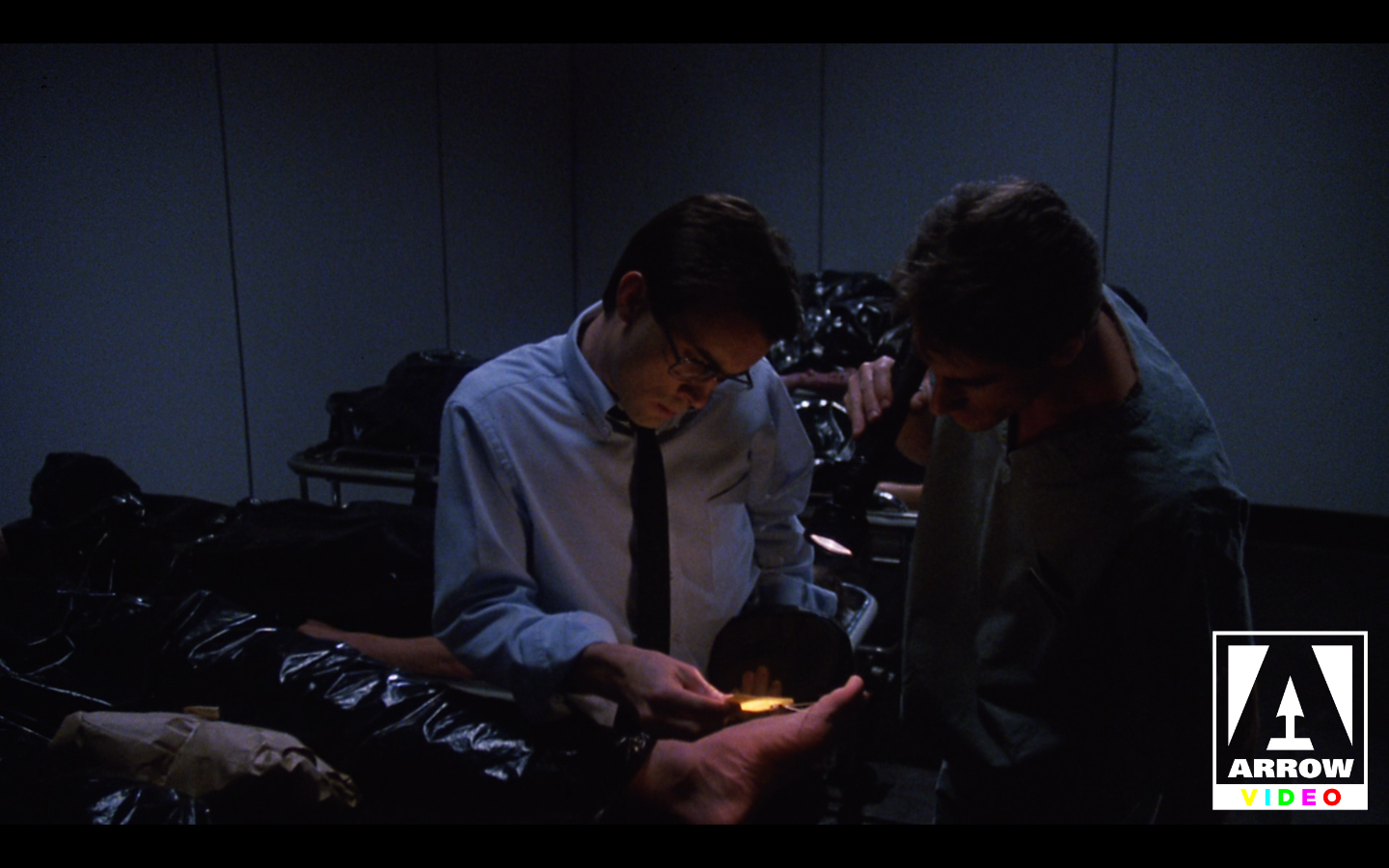 Arrow has done it again. Re-Animator arrives in this two-disc special edition in a stunning case featuring artwork from Justin Erickson (poster art for The Void and artwork for Mondo’s upcoming The Thing board game). A hard-shell outer package holds a soft three-flap, two-disc interior which also houses the limited edition booklet featuring a critical essay by Michael Gingold as well as the accompanying reprint of the Re-Animator comic book from Adventure Comics. Finally, a set of postcard sized art cards featuring production stills is also included. On the discs themselves come the motherlode: a bevy of content both old and new has been concentrated in one place for the true fanatics. For new material, Arrow has collected a new audio commentary featuring director Stuart Gordon as well as new interviews with Gordon and Barbara Crampton. Further, copious extra content highlighting the production of Re-Animator: The Musical (on which Gordon worked) is also included. Numerous other commentaries, documenatries and featurettes previously seen on other releases are also collected. Of all of these, my favorite was easily the reading of Lovecraft’s original story by actor Jeffrey Combs. All in all, the comprehensiveness here is astounding. From Arrow’s database: 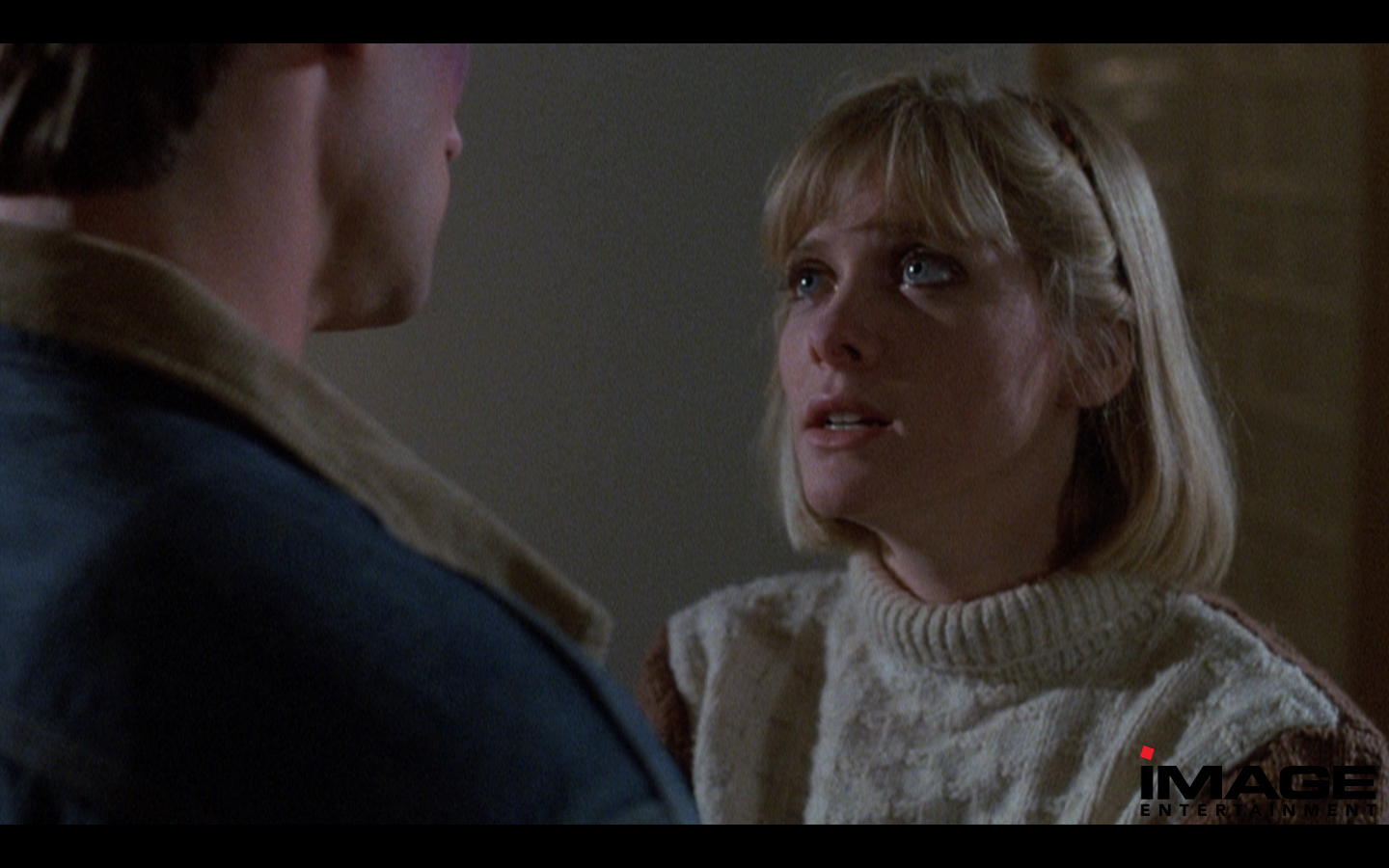 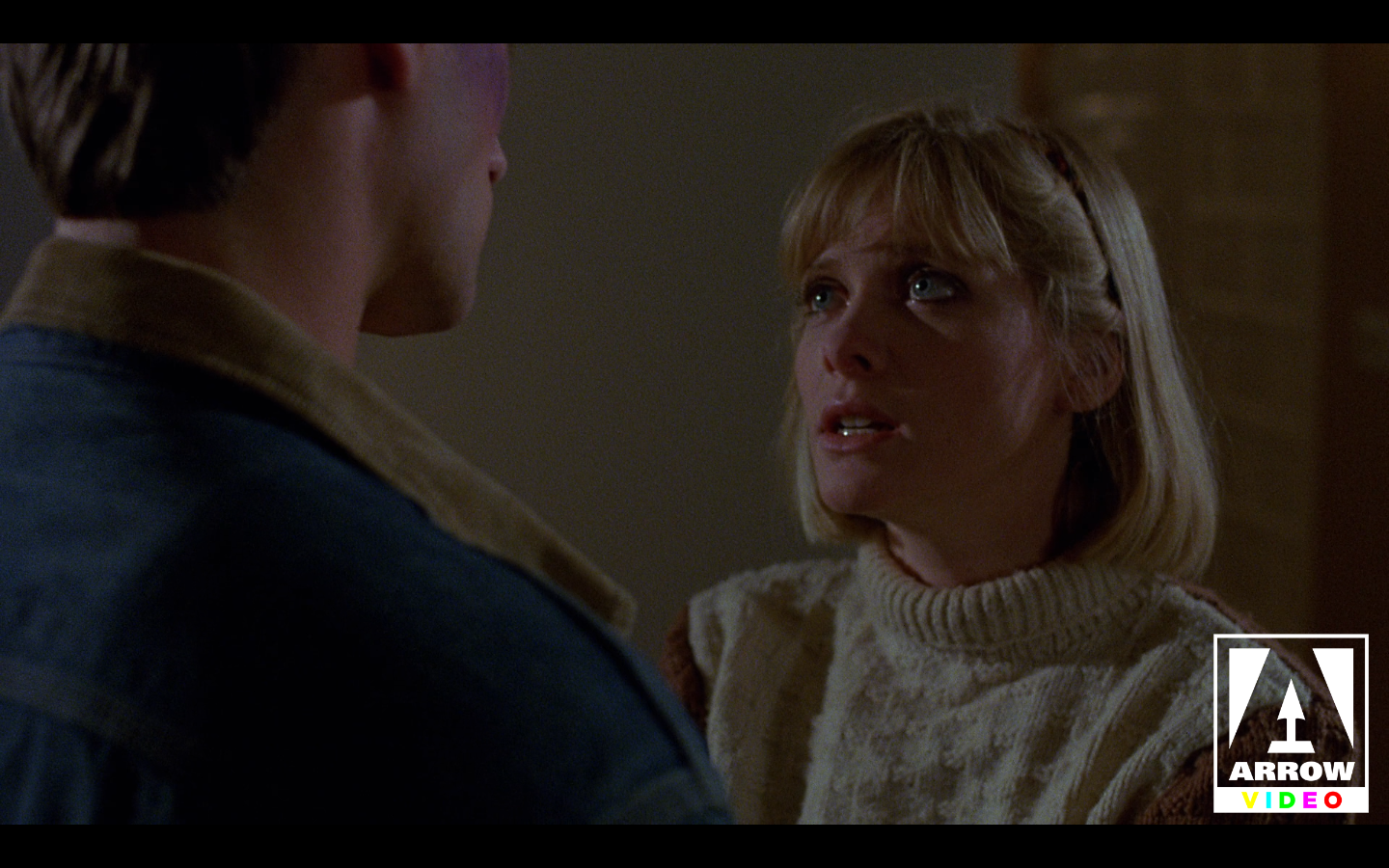 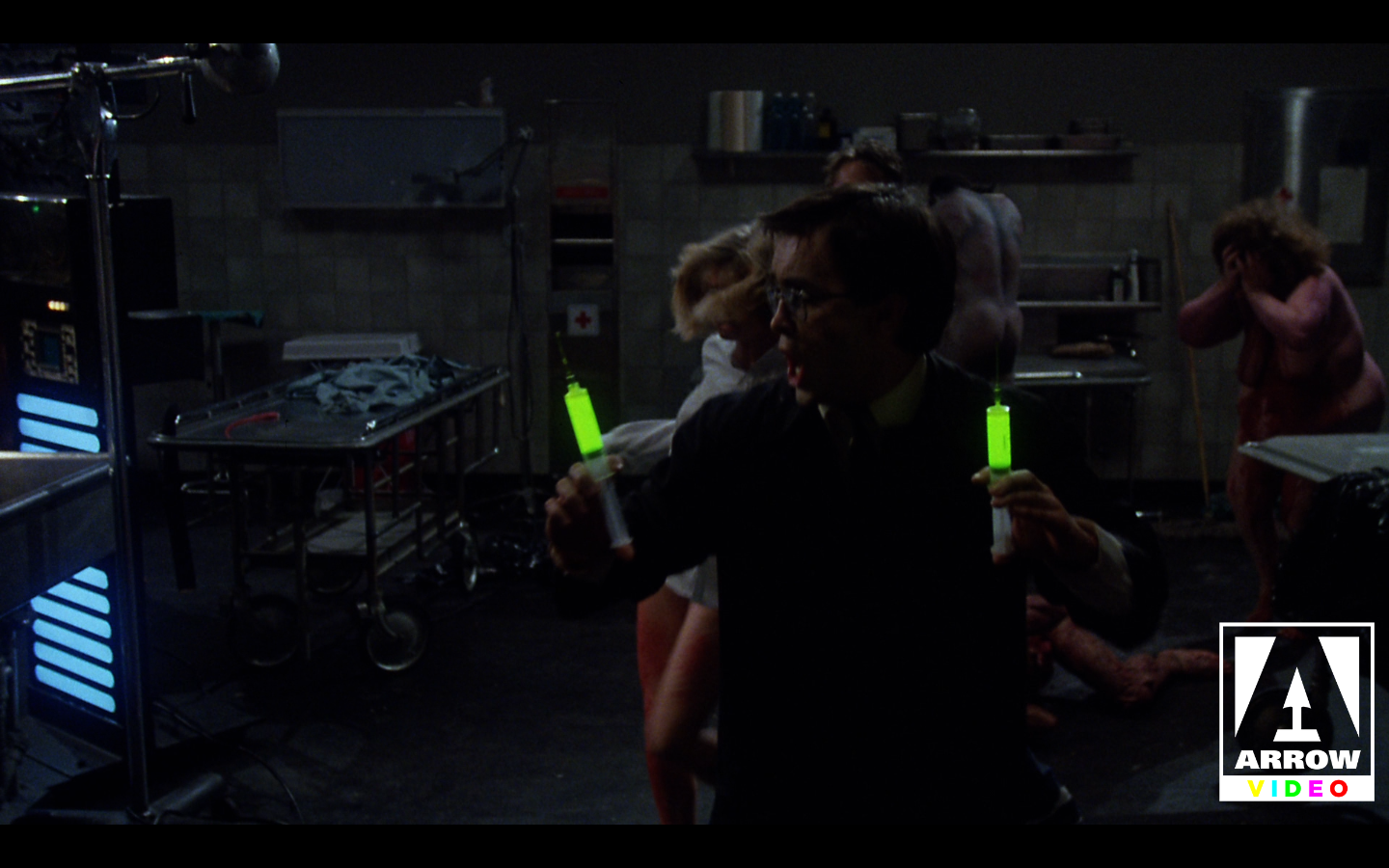 One of the greatest horror films ever made arrives in a beautiful special edition from Arrow Video that should have fans everywhere cheering and rushing out for their copy. Since its release in 1985, Stuart Gordon’s Re-Animator has enjoyed a special place of renown in the hearts of many horror fans, and now they have a definitive release to place on their shelves after three decades of releases of varying quality and editions. In terms of the audio and visual presentation here, Arrow clearly recognized how beloved the film they had on their hands was as they spared no expense in producing a brand new presentation that is going to wow viewers with its robust presentation of Gordon’s masterpiece. In addition, the chance to finally see the mysterious “integral” cut, never before officially released in North America, is additional cause for celebration. Not only to have this somewhat heretical take on the beloved film but in such startling quality is truly a gift. Make no mistake, you should pick this one up as fast as possible because this release will undoubtedly be very popular. So get out there, pick up a copy and some friends along the way, and then get ready for a bloody good time. OVERDOSE!