Personal films from directors are always difficult to judge as a critic. Many of them reflect their darkest inner thoughts and feelings, whether it be about a childhood incident, or some sort of experience that shaped their thoughts and feelings as an adult, and sometimes they come of as dispassionate or pessimistic. As film goers, many of us head to the cinemas to escape the inadequacies of real life, striving for daring heroics, and melodrama to help us relieve the stresses of everyday life, so when I come across a movie like Rams, that is so sad, and so grounded in its attempt to tell a story, I typically have a hard time putting my thoughts behind a number, or even in writing to begin with.

Rams, winner of the 2015 Un Certain Regard prize at the Cannes Film Festival, tells the story of two estranged brothers, both sheep farmers on the same land. Their flocks of sheep come from a prized bloodline, one that has stuck with their family throughout the ages and kept them relevant over the years. Because of their hatred for one another, they have raised two separate flocks independently, and have been vigorous competing to present the best ram at their local competition. After coming in second place to his brother, the older brother Gummi inspects his prize winning ram, only to discover that it exhibits the signs of a deadly disease, one that could possibly threaten all of the sheep in their region. After bring this to light, and further damaging the relations with his brother Kiddi, Gummi attempts to fight the cleansing of the sheep, and in an act of desperation, must make amends to defend their flock of sheep from total decimation.

The poster art on the front of the Blu-ray case praises this film as, “A marvel of deadpan comedy,” but I must have missed something. Perhaps it was the language barrier, but I found Rams to be an absolutely tragic film, with little comedy to be found during the film’s 93 minute run time. In 93 minutes, I saw a region’s way of life succumb to a deadly disease, forcing economic ruin on many, including our two brothers. I saw two brothers fight each other to the breaking point, as they struggle to come to terms with the end of their dynasty of award winning super sheep, thus destroying the only thing that made either of them happy in their old age. I saw a man wash his hands of the blood of the only thing that his mother and father left for him, a legacy that he could not protect. I saw sadness of an unimaginable magnitude, as an era closes, and these two men realize that it’s closed without them. 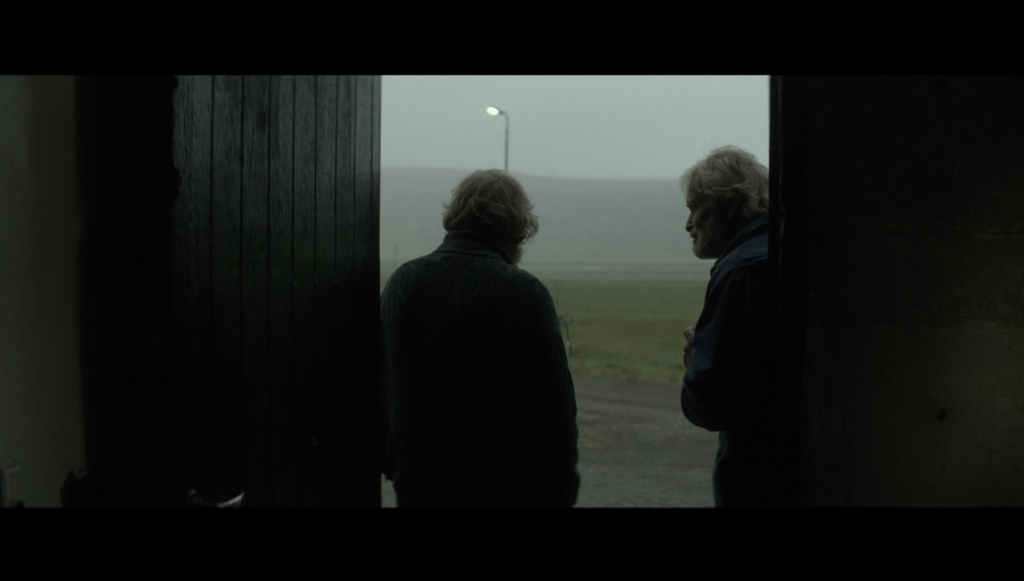 That being said, I felt the film was incredibly well put together. The two leads, around which the film is based, are played quietly, but intensely by Icelandic actors Sigurður Sigurjónsson (Gummi) and Theodór Júlíusson (Kiddi) as they portray two men at the ends of their rope, forced to put aside their differences to save their legacy. The script is rock solid, conveying emotion through controlled bouts of frustration, and visual bursts of intensity. The film is edited rather slowly, but it feels intentional, using long takes and expertly chosen close-ups to really draw us in to the pain of the characters on screen. The cinematography, created by Sturla Brandth Grøvlen, is cold and grounded in the pale environments of Iceland. His style favors a natural color scheme, that sets a distinct tone through borderline de-saturation. 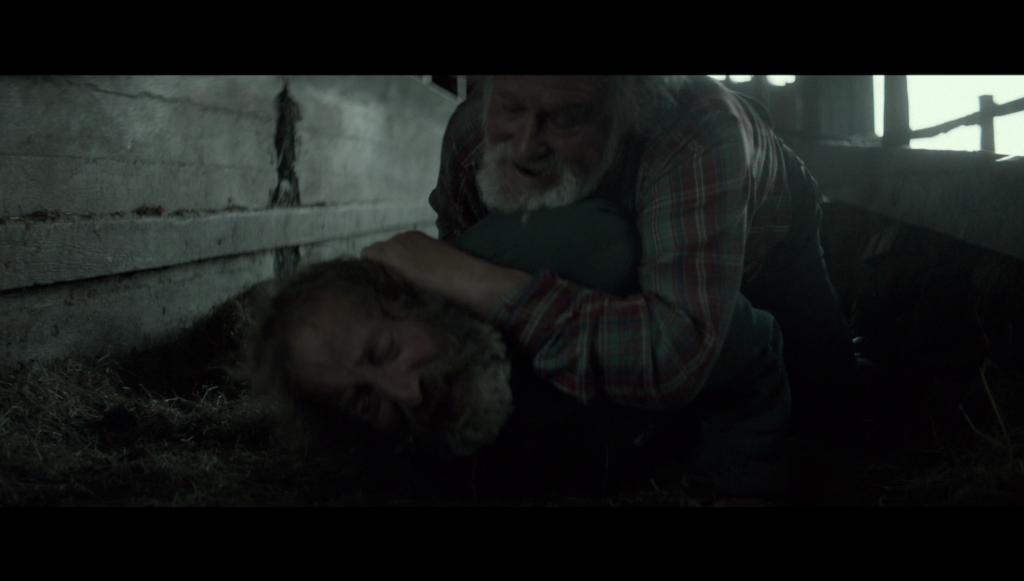 You can tell, through the film, and through one of the added features, that Rams was a personal story, taken from real life and portrayed on screen by director Grímur Hákonarson. It spares us nothing in its depiction of the events that tore through poor Gummi and Kiddi’s life, presenting it in a cold, natural style. The film is oppressively sad, and as the credits rolled, it left me speechless in its conclusion. As far as I’m concerned, the film brilliant’s depicts some of the darkest moments in life, in a very effective manner. Some people will watch a movie like this, and give it a 2 or less, finding little enjoyment. I felt it was somewhere close to the 4+ region of this, so I’ll settle in the middle.

As with many foreign, independent films, details on how the film was shot and finished are sparse. According to IMDB, the film was shot using anamorphic lenses using the Arri Alexa camera. Based on the film’s budget, I can only assume it was finished in 2K, for a theatrical aspect ratio of 2.35:1. The film is presented in 1080p, maintaining the theatrical 2.35:1 aspect ratio. English subtitles are present for the feature, remaining in the letterboxed image when displayed through my PS3.

As I mentioned above, Rams is a rather cold movie, especially the sequences set in winter time. Many times, especially in wide shots, the image will resolve with an almost distracting softness around the edges, a quality of the lenses used to shoot the film I imagine. Detail in mid and close-up shots in excellent, showing every wrinkle and defect our two older leads have to offer, and resolving each sheep hair quite nicely. The film uses a very grounded and minimal color palette, and a layer of digital film grain has been added in post, attempting to give it a more filmic look, which works in some areas, and makes little impact in others. Rams is not a large scale, beautiful movie, but the visual transfer is adequate for a film like this.

Rams is presented on Blu-ray using a 5.1 DTS-Master Audio soundtrack in the Icelandic language, mirroring what audiences heard in theaters.

Rams has a surprisingly active and engaging sound design for a film of its caliber. Sounds often pan across the three speaker front, and through to the surrounds rather effectively. During some of the film’s more intense winter weather sequences, wailing wind surrounds you from all channels, and dialogue even occasionally pans to the left and right front speakers. There is little in terms of subwoofer activity, but I feel that it doesn’t detract from the overall experience. I was pleased with the included soundtrack for Rams.

As with every Cohen Media Group Blu-ray, the packaging is quite nice. On the front of the Blu-ray keepcase is the film’s awards poster, featuring a ram looking down at Gummi. On the back of the case is a paragraph about the film, a few pictures from the film, a list of special features, technical info, and film credits. Both of these are surrounded by the typical red and black Cohen border. On the inside of the case is a booklet, which features credits, chapter stops, and full color pictures from the film, and inside case art, featuring a lovely shot of the rams, backlit by sunlight. Another solid package from Cohen. 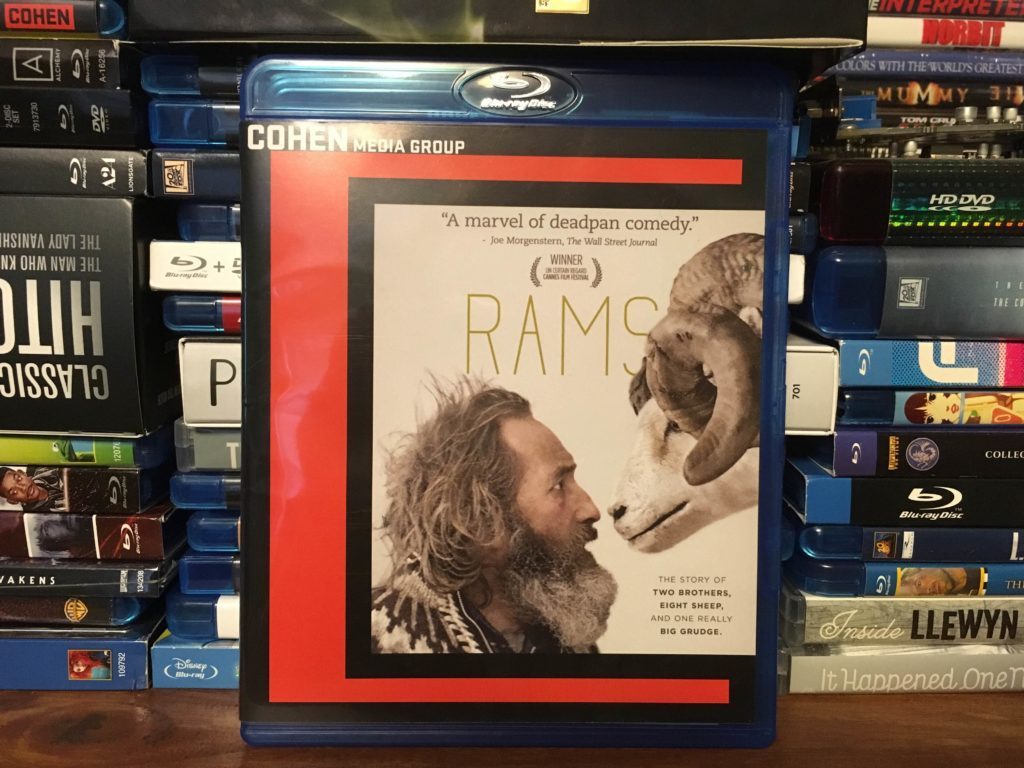 Onto the film’s special features, of which there are three.

Interview with Director Grímur Hákonarson – a five minute interview with the film’s director, who discusses trying to get the film made, and his inspiration for making the film. 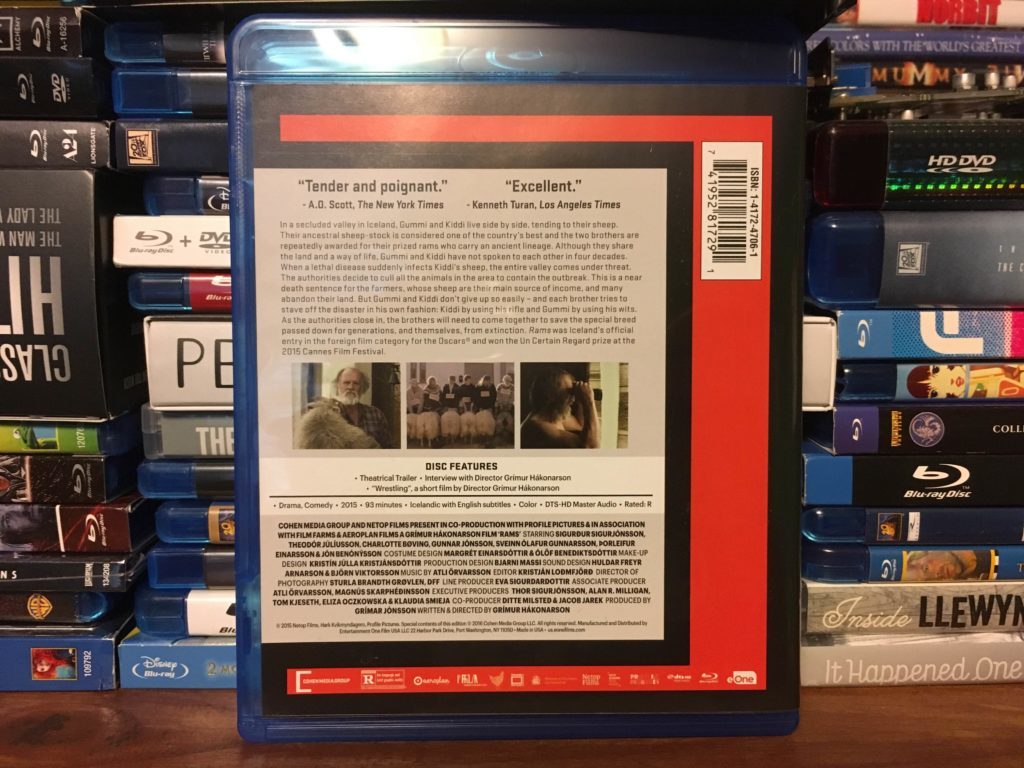 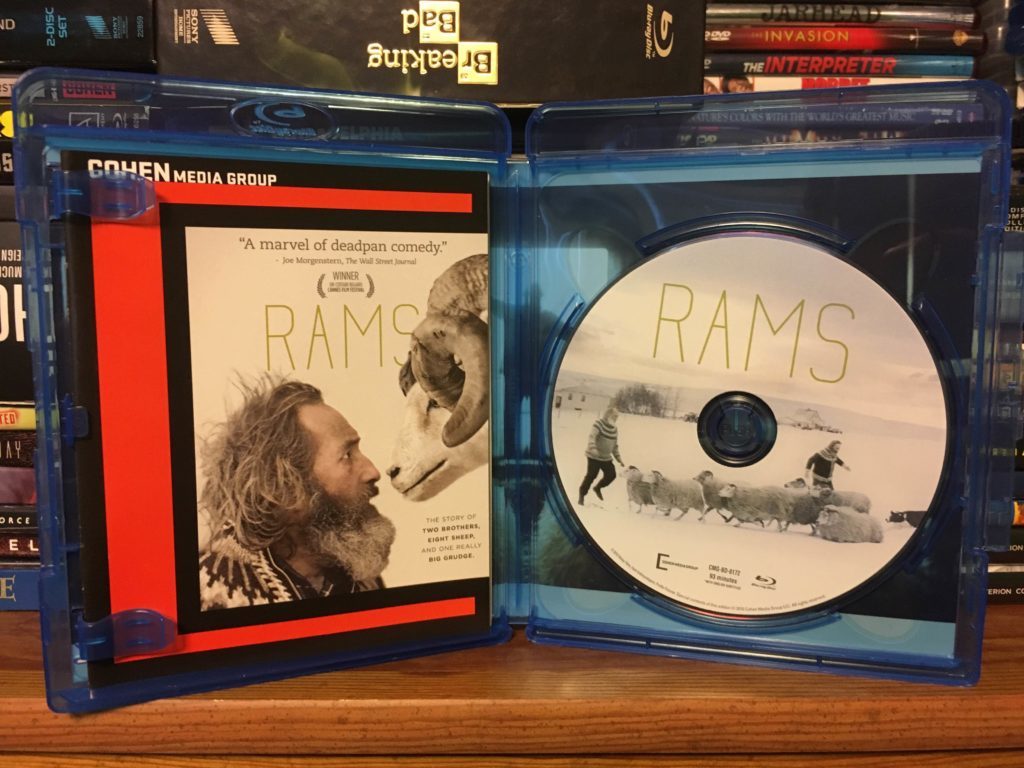 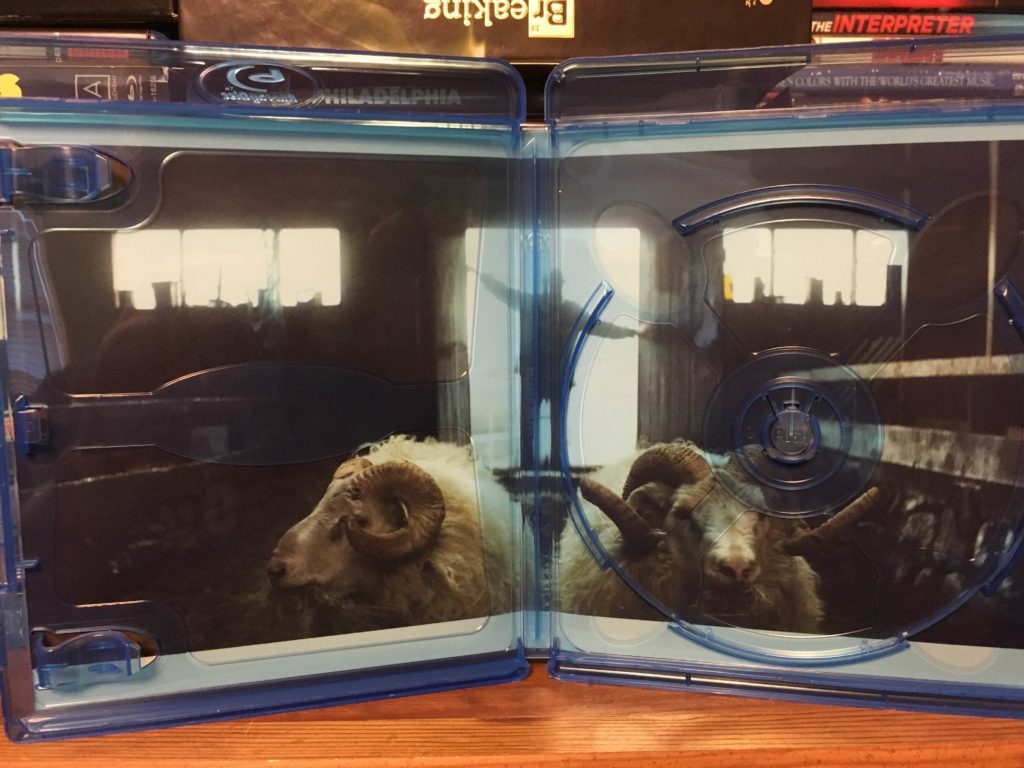 Overall, Cohen makes consistently interesting and high quality packaging, but skimps out on the extras for some of their more interesting recent releases – Rams in no different. 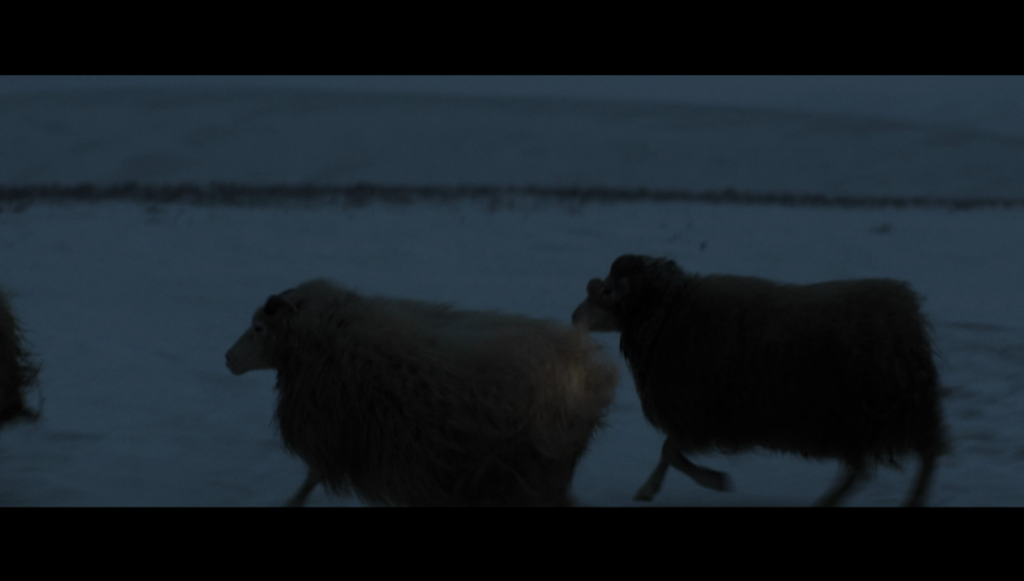 Rams is a tough film to sit through, as it moves slowly through a desperate struggle for two brothers to stay relevant in a world that’s clearly move on without them. The film is relentlessly tragic, even as our brothers are forced to band together in the film’s intense conclusion. The script, editing, and cinematography are excellent, and the film is well acted by all involved. Director Grímur Hákonarson has created a fascinating, if not difficult to penetrate depiction of life as a sheep farmer in modern Iceland, that will open the eyes of some, and polarize and turn off others. The film., presented on home video by Cohen Media Group, has satisfying audio and video transfers, and features excellent packaging but little in terms of special features, which is disappointing. It is tough for me to recommend such an oppressively sad film, but it is absolutely not without merits – you probably already know if this is your kind of film.