Ralph Breaks the Internet (originally titled as Ralph Breaks the Internet: Wreck-It Ralph 2) is a 2018 American 3D computer-animated comedy film that was produced by Walt Disney Animation Studios and distributed by Walt Disney Pictures. It is the sequel to the 2012 film Wreck-It Ralph, making it Disney’s 57th feature-length film. The film was directed by Rich Moore, and Phil Johnston (who wrote the screenplay with Pamela Ribon), and executive-produced by John Lasseter, Chris Williams, and Jennifer Lee. It features voice work by John C. Reilly, Sarah Silverman, Jack McBrayer, Jane Lynch, and Ed O’Neill (reprising their roles from the first film), with Alan Tudyk returning to voice a new character, and new additions to the cast that include Gal Gadot, Taraji P. Henson, and Alfred Molina.

The first discussions about a sequel to Wreck-It Ralph originally began in October 2012, and the new installment went through three different scripts before the filmmakers settled on the final plot. When the film was officially announced in June 2016, much of the original cast had confirmed that they had signed on, with new cast members being added in 2018. It is Walt Disney Studios’ first animated sequel to be created by the original film’s writing and directing team.

Ralph Breaks the Internet had its world premiere at the El Capitan Theatre in Los Angeles, California, on November 5, 2018, and was released in the United States on November 21, 2018. The film has grossed over $506 million worldwide, and has received mostly positive reviews from critics, who called it a “worthy successor” and praised the animation, humor, characters, and plot, as well as the vocal performances of Reilly and Silverman. The film was also nominated for Bests Animated Feature at the 91st Academy Awards, 76th Golden Globe Awards, and 24th Critics’ Choice Awards. 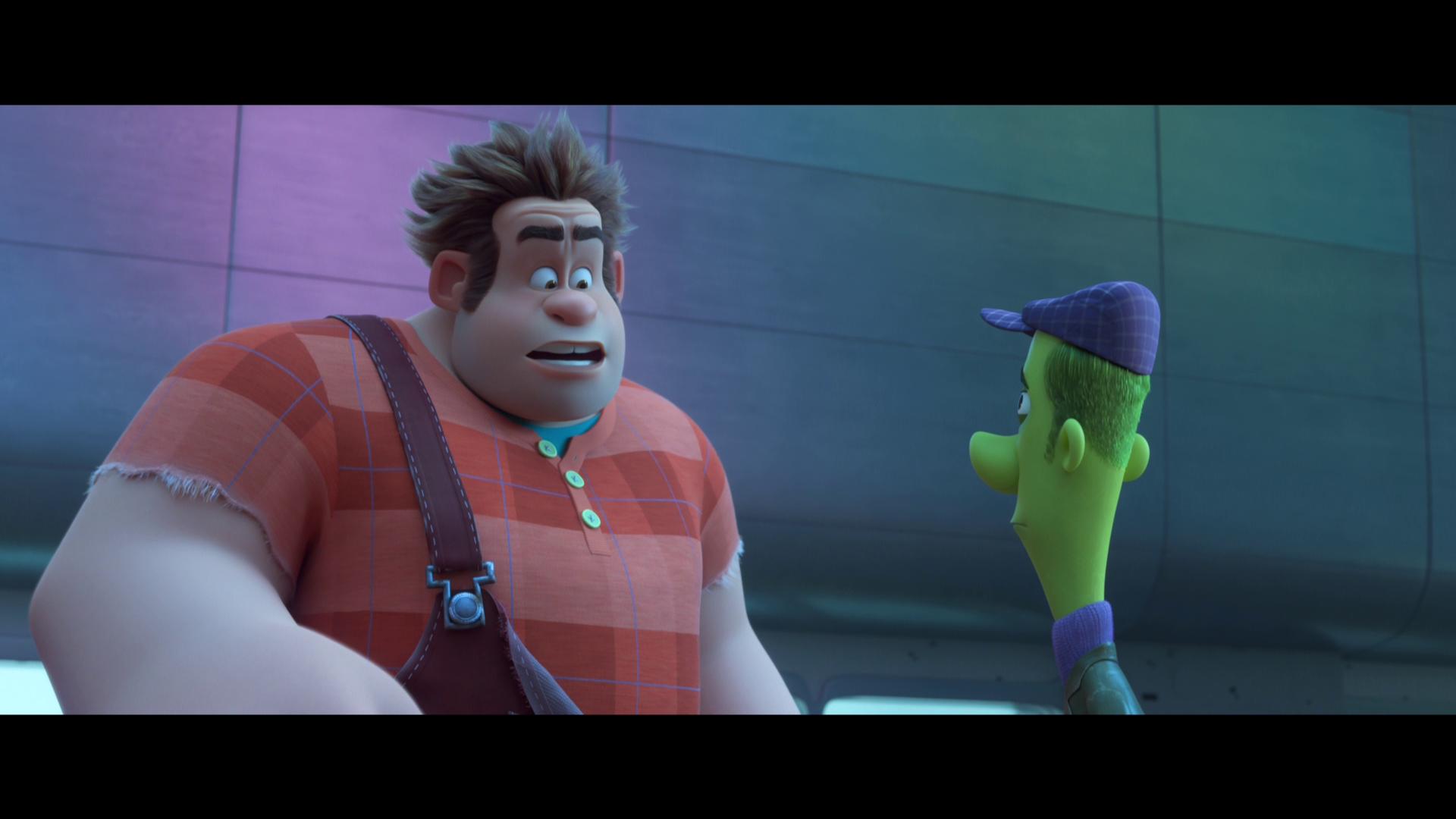 Ralph Breaks the Internet is one of the more anticipated sequels for myself. As soon as the first promotional spot became available, I was eagerly awaiting its release as I thoroughly enjoyed the first one. This new one features a storyline that broadens those horizons that were originally set seven years ago, it does a pretty solid representation of the various things that are out there on the internet. As you follow along with this one, you will notice that the the plot line doesn’t flow as good as the original film; however, it doesn’t create any distractions, and really does a great job at making sure that viewers enjoy everything that’s about to happen.

Presented with an upscaled 2160p presentation with HDR10, Ralph Breaks the Internet gives its viewers an extremely clean and considerably crisp presentation with a significant boost to the color palette. Despite the fact that the animation was rendered at 2k, where this release scrams is with its utilization of HDR as the smaller textures become more obvious, and the finer details to the animation can be appreciated. As my wife and I watched along, we didn’t really notice anything that would create a concern in the presentation, and simply just sat there in awe of the visuals, allowing for this release to be another feature piece for my living room setup. 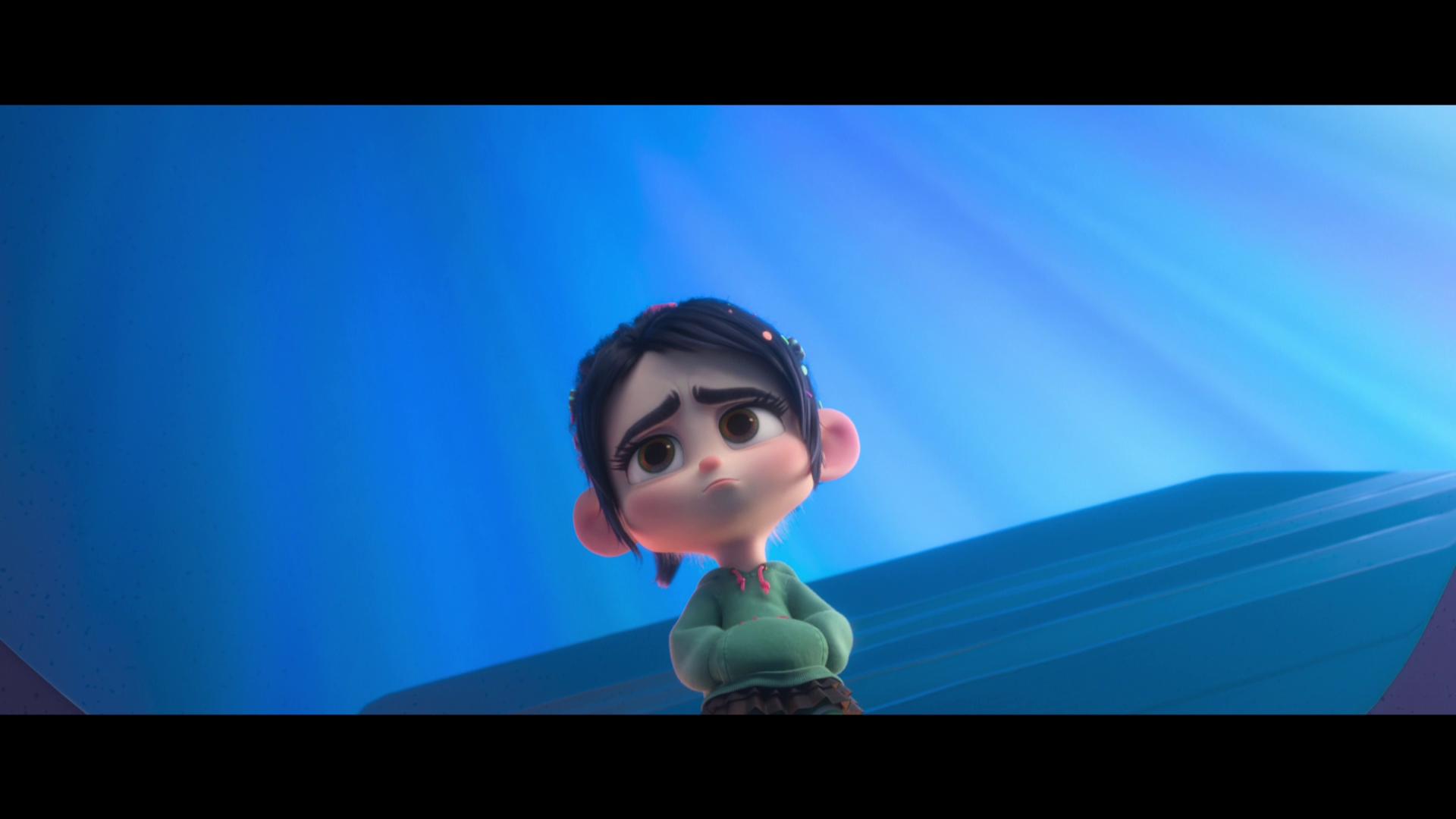 Packed with an English Dolby Atmos audio track, the 4K UHD release of Ralph Breaks the Internet provides its viewers with an absolutely all out immersive audio experience. Where things become more noticeable are when it’s obvious that there are the additional elements to the track, like the tie-fighters flying by, and the transitions from channel to channel being smooth and effortless. The dialogue is spoken cleanly, and the characters are certainly able to be heard and understood without any issue or need to increase the volume levels. 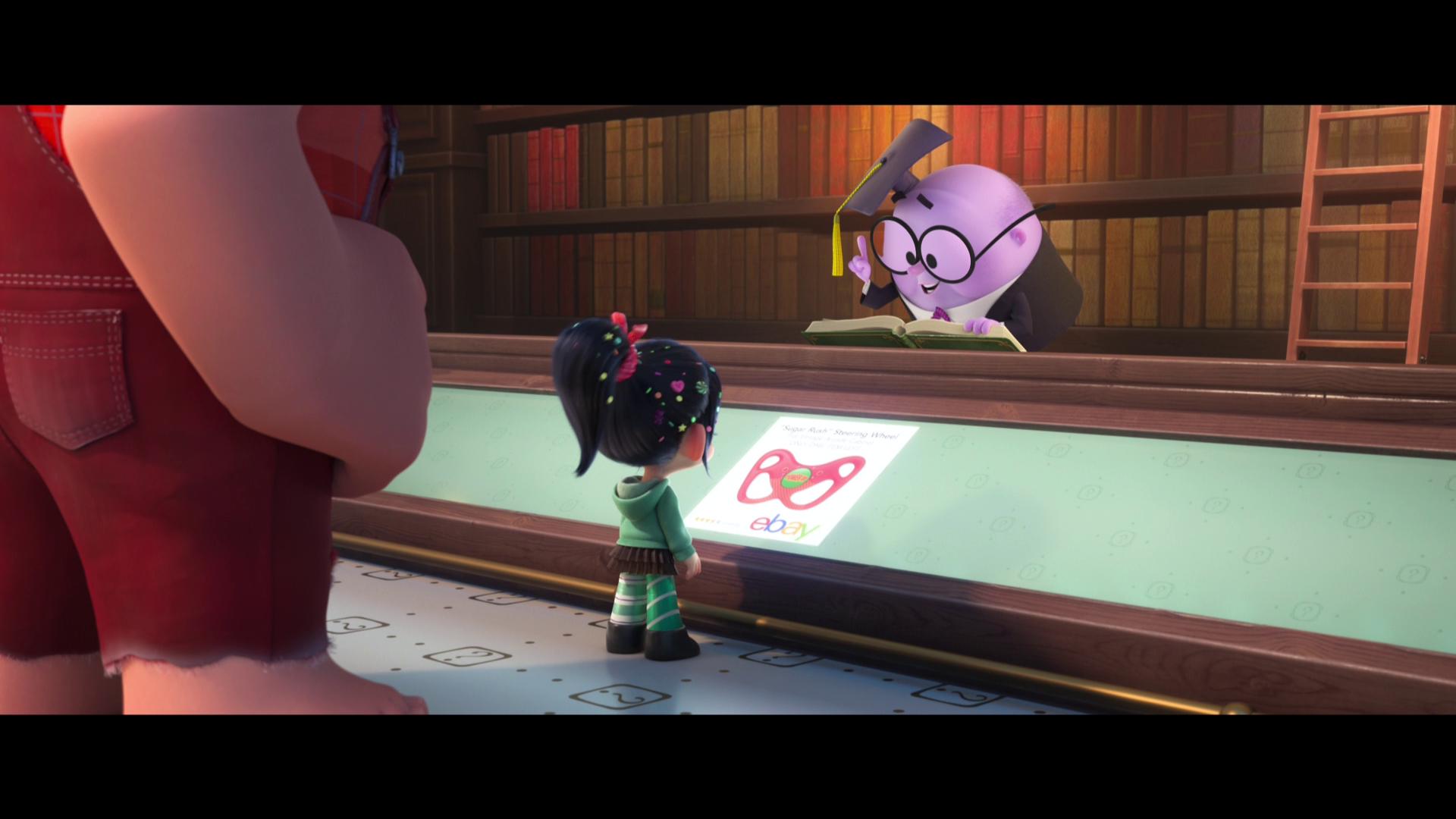 The 4K release of Ralph Breaks the Internet comes packaged in the standard two-disc UHD amaray case.  The UHD includes a piece of artwork that resembles that of the Mac OS pinwheel, while the Blu-ray disc only wears the standard release text and solid blue background.  There’s a digital copy that’s been included as well as a slipcover in the initial pressing that includes the same artwork as the case. 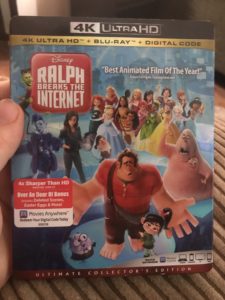 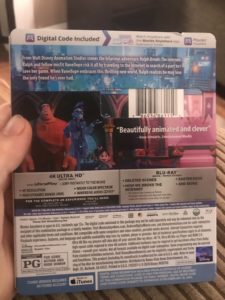 Unfortunately, the 4K UHD release of Ralph Breaks the Internet is like most other 4K UHD titles, in that there’s no special features included on the UHD, and all additional content included is provided on the Blu-ray disc. The content that’s included offers a small exploration into the movie, a small look at the production work, and some interactive things for children to play along to. Included with this release is: 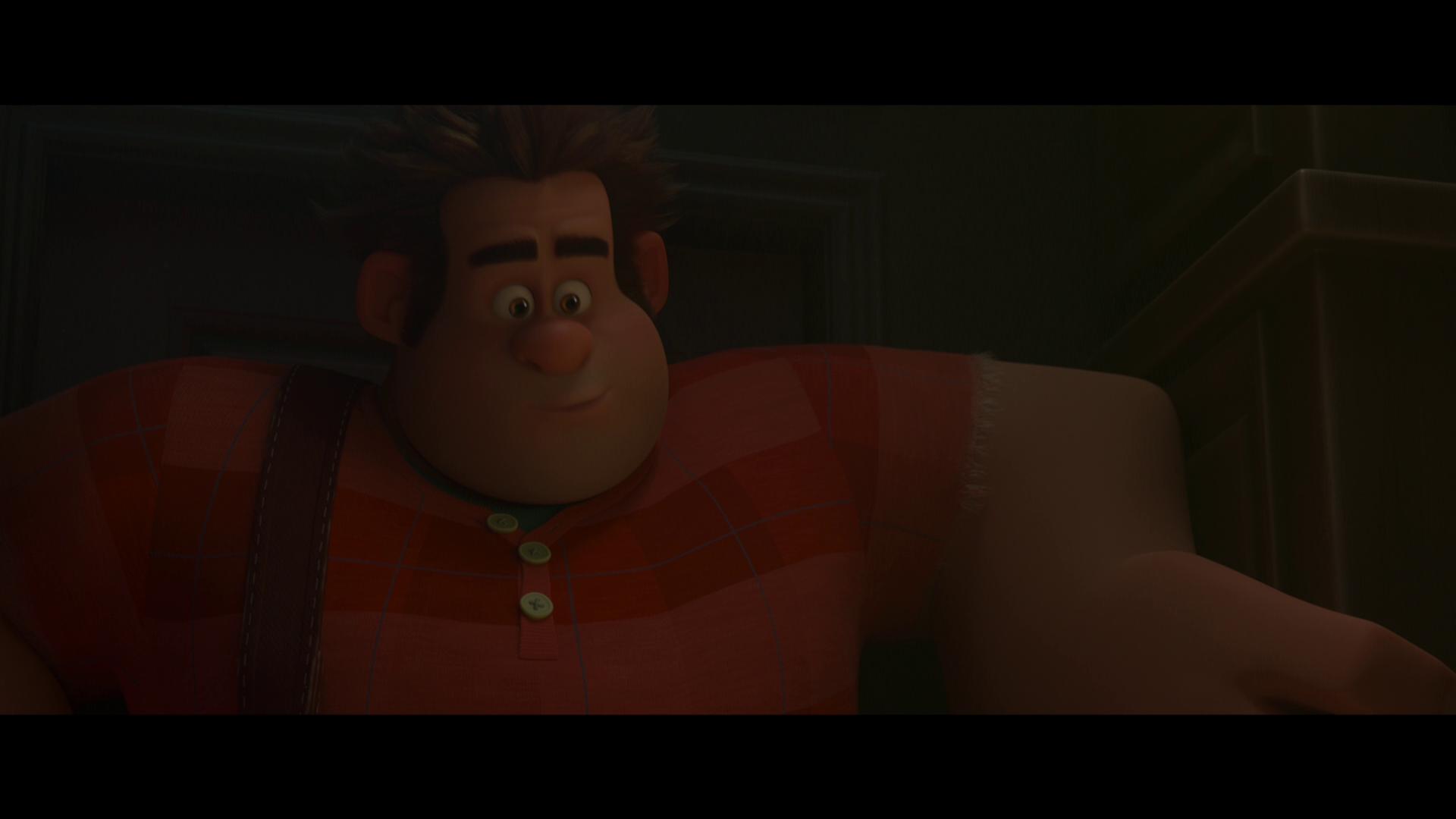 Overall, both my wife and I absolutely enjoyed sitting down to Ralph Breaks the Internet. The story is solid, and the overall experience is pretty close to what was provided from the first movie. The audio and visual presentation of the 4K release were exceptional and offered an extremely clean experience. The special features were “okay” as they gently touched on the movie and the work that went into it. If you’re considering this release for your collection, I’d definitely recommend picking it up. Ralph Breaks the Internet is available on 4K UHD, and Blu-ray. 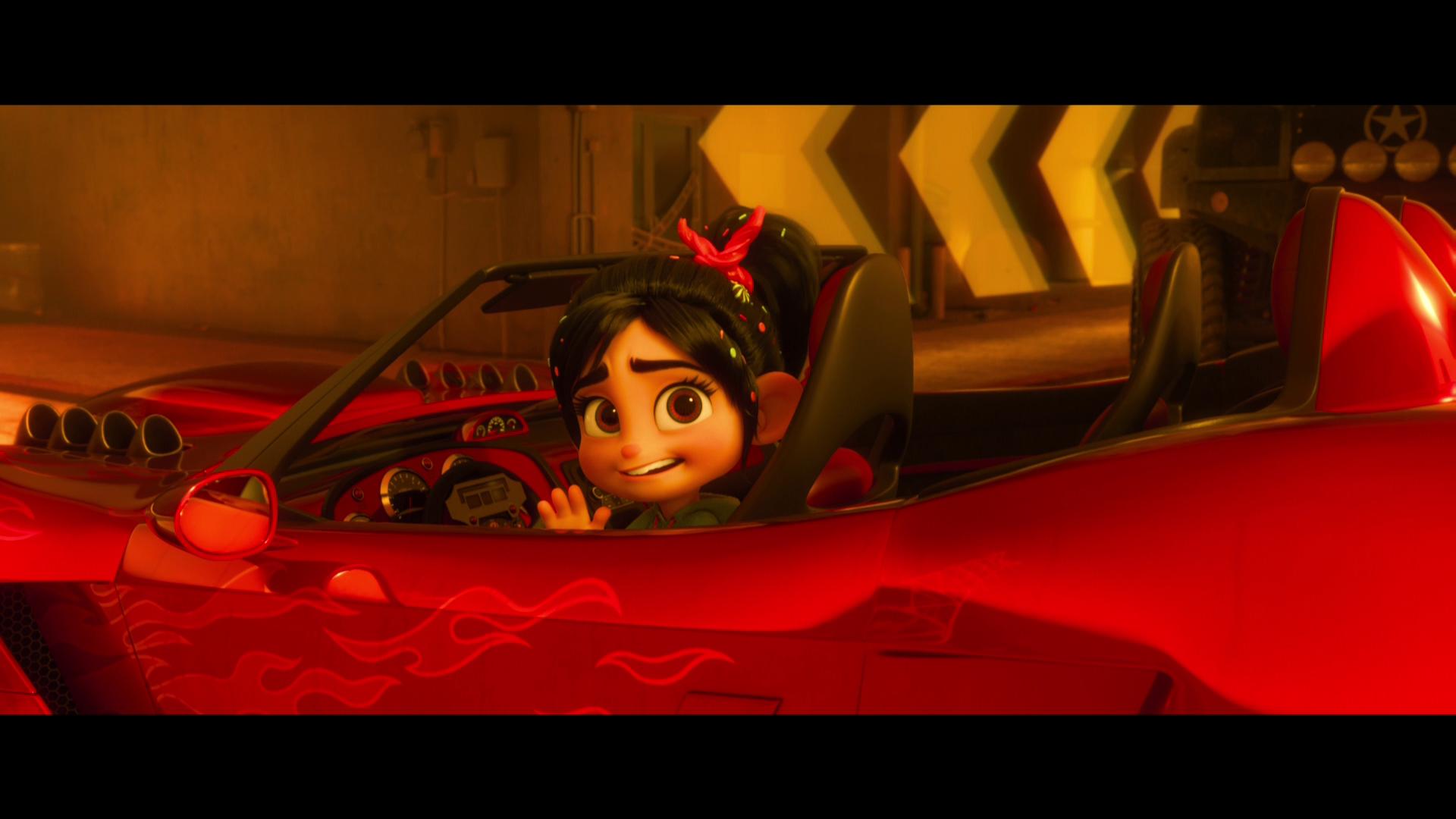