Telling us the tale of Junior and the fact that his mother had abandoned him at a young age. He lived in thirty foster homes, including a Catholic orphanage. Ben Healy (John Ritter) is a pleasant but brow-beaten yuppie working for his father, “Big Ben” (Jack Warden), a very successful tyrannical sporting goods dealer who is running for mayor. Ben and his social climbing wife Flo (Amy Yasbeck) have been unable to conceive, and from there Ben approaches an adoption agent with his dilemma. The adoption agent, Igor Peabody (Gottfried) presents Ben and Flow with a cute seven-year-old boy named Junior (Michael Oliver). However, Junior is hardly a model child. Considered to be devilish and incorrigible, the child leaves a path of serious destruction in his wake, and is even pen pals with Martin Beck (Michael Richards), a notorious serial killer. The film is interspersed with an imprisoned Beck looking to escape and eventually meet up with Junior, whom he misconstrues as a fellow criminal named “J.R.”

The film debuted ad third place and went on to be a commercial success at the box office, grossing $54 million domestically and $72 million worldwide. While it’s since widely received negative reviews upon its release. The critics consensus reads that it’s “Mean-spirited and hopelessly short on comic intervention, Problem Child is a particularly unpleasant comedy, one that’s loaded with manic scenery chewing and juvenile pranks.” Although it was rated PG, it is still heavily censored when it’s shown on television due to the remarks that are made about adoption, which critics saw as insensitive. It was not screened for critics prior to its release. 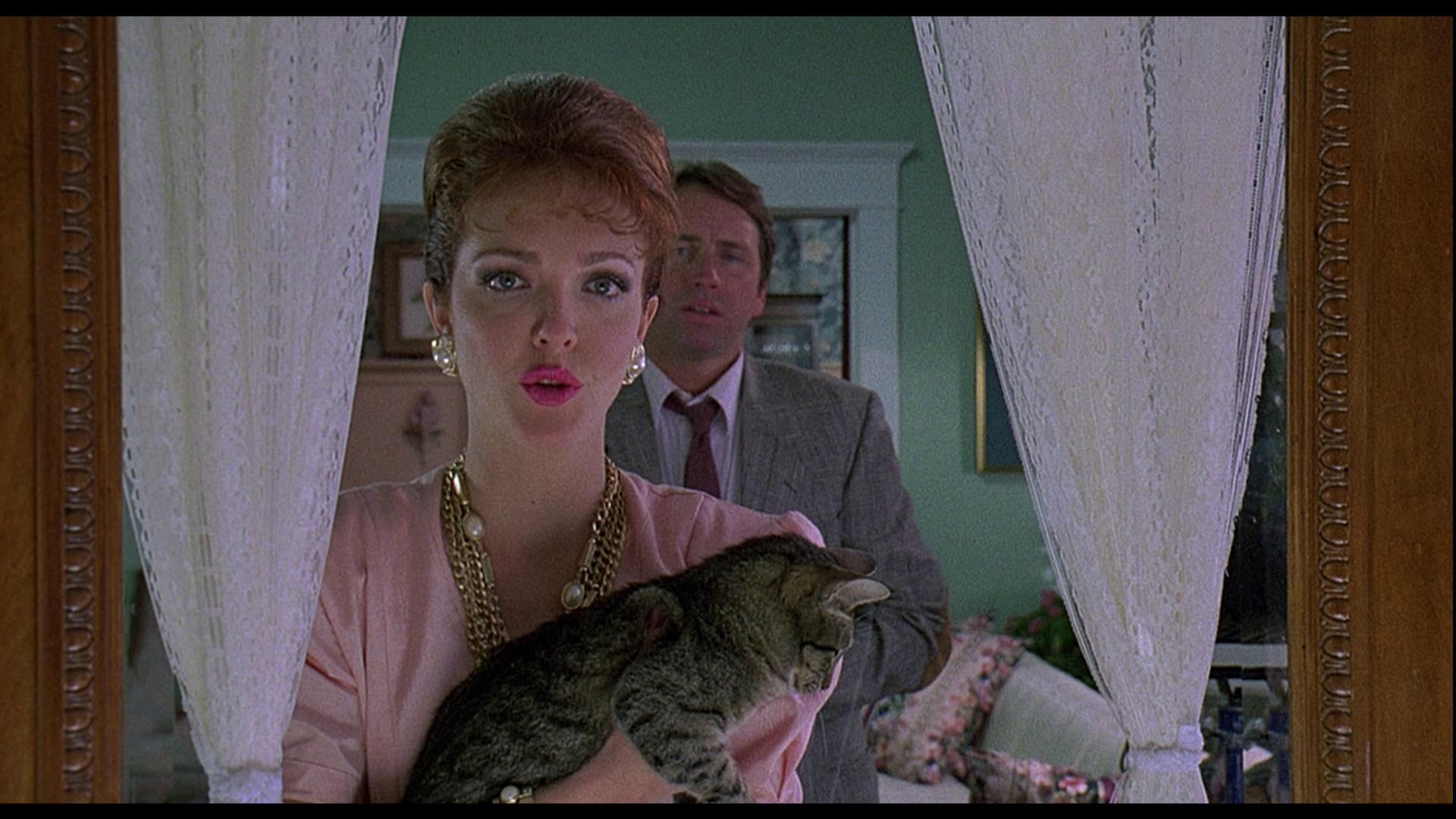 Problem Child is a film that I personally haven’t seen in years, and only remembered small pieces from.  That said, I was excited to bring this release home as I do remember semi-enjoying it.  And with this particular release, that particular feeling of slight fulfillment in this movie remained the same.  Giving us a story that’s very Dennis The Menace-esque but with more of a seeking the approval and love of your family aspect, it wasn’t all that bad.  There were moments during the story that I straight up laughed my ass off, while there were others that I did not find myself too entertained.  Those involved in the cast of this film, from the child (Michael Oliver) to the father (John Ritter) and the unexpected criminal (Michael Richards) did an absolutely fantastic job in their respective roles and offered a story that has not only held up throughout the years, but was very well maintained as the film moved onward. 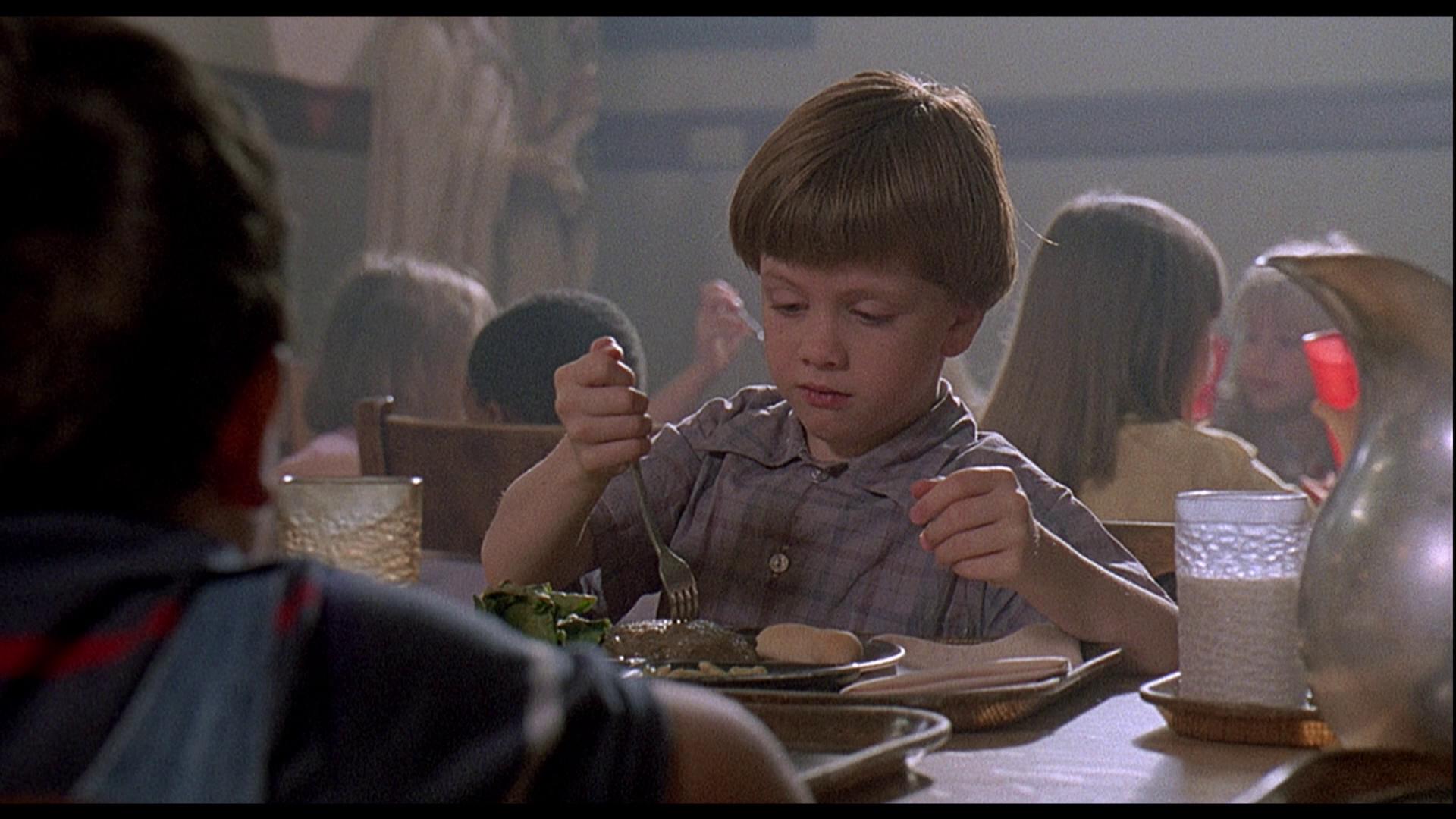 The overall visual presentation of Problem Child was significantly better than my previous encounters with the film; however, that enhancement is something that I expected with the changes in technology over the years.  The picture quality itself was really nicely done as my wife and I were able to see and understand everything as the move played out on our living room television.  There were some aspects of the film that I didn’t remember seeing that were much more visible in this release.  The only problem that I saw with this release, and I want to preface this with that it could possibly be related to the original source material, but during some of the scenes that played out on this release in the very beginning seemed to have had some serious interlacing issues.  Interlacing itself is something that I personally wouldn’t have expected to see on a Blu-ray release, however they were definitely present and only there for a brief moment of time. 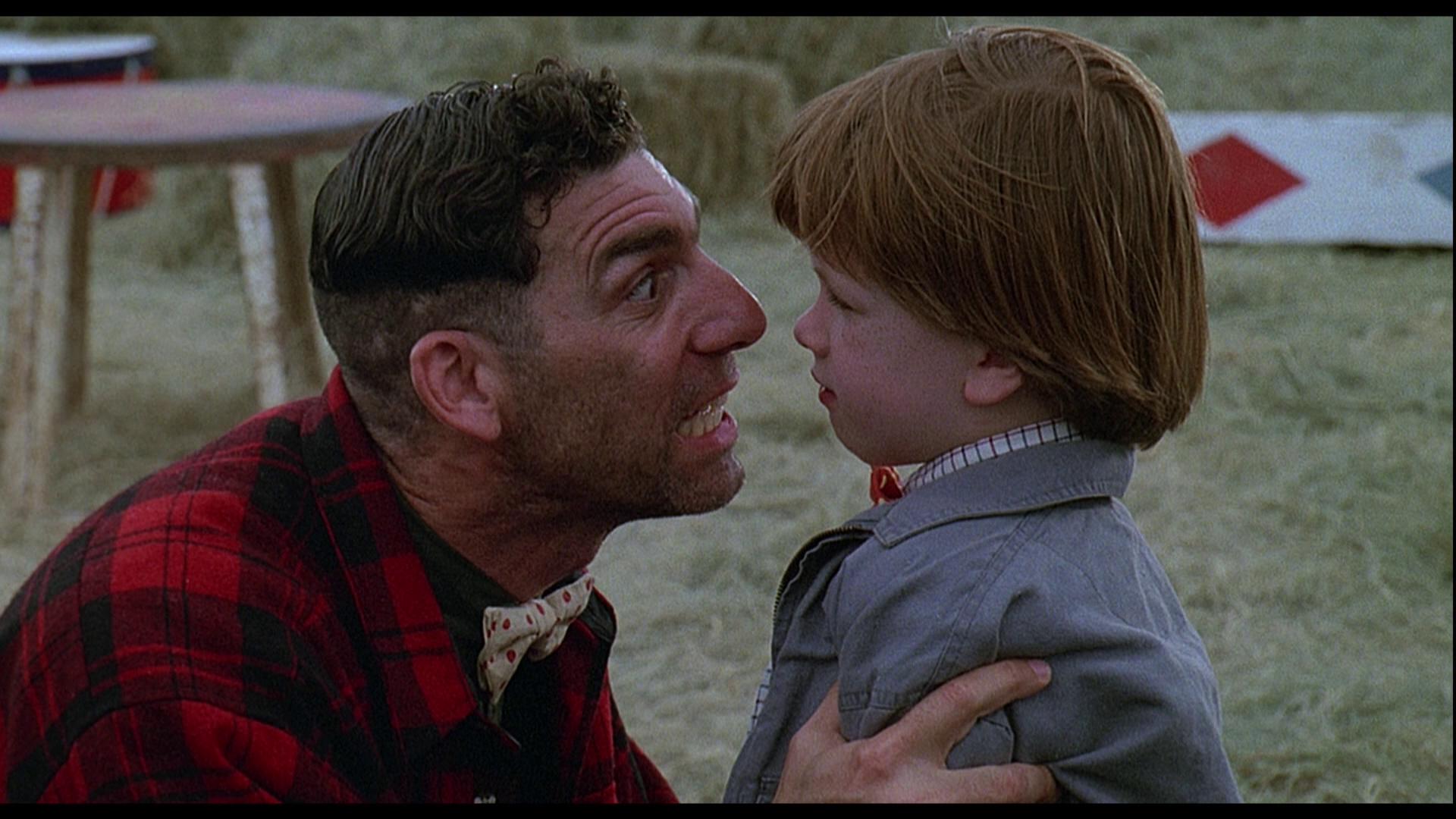 Packaged with a DTS-HD Master Audio 2.0 audio track, Problem Child doesn’t really offer much in terms of an immersive experience for its home viewers.  However, the overall audible presentation of this film has never sounded better until now!  Various aspects of the story that weren’t heard previously, like the starting of the fire in his bedroom from the downstairs area of the house were significantly more prominent and easily available to the untrained ear.  As my wife and I watched this movie, we were able to hear and understand everything as the movie played out and we really couldn’t complain too terribly much.  We just wished that they would’ve gone with an optional 5.1 audio track since they were already putting the work into making this release available in a better quality presentation. 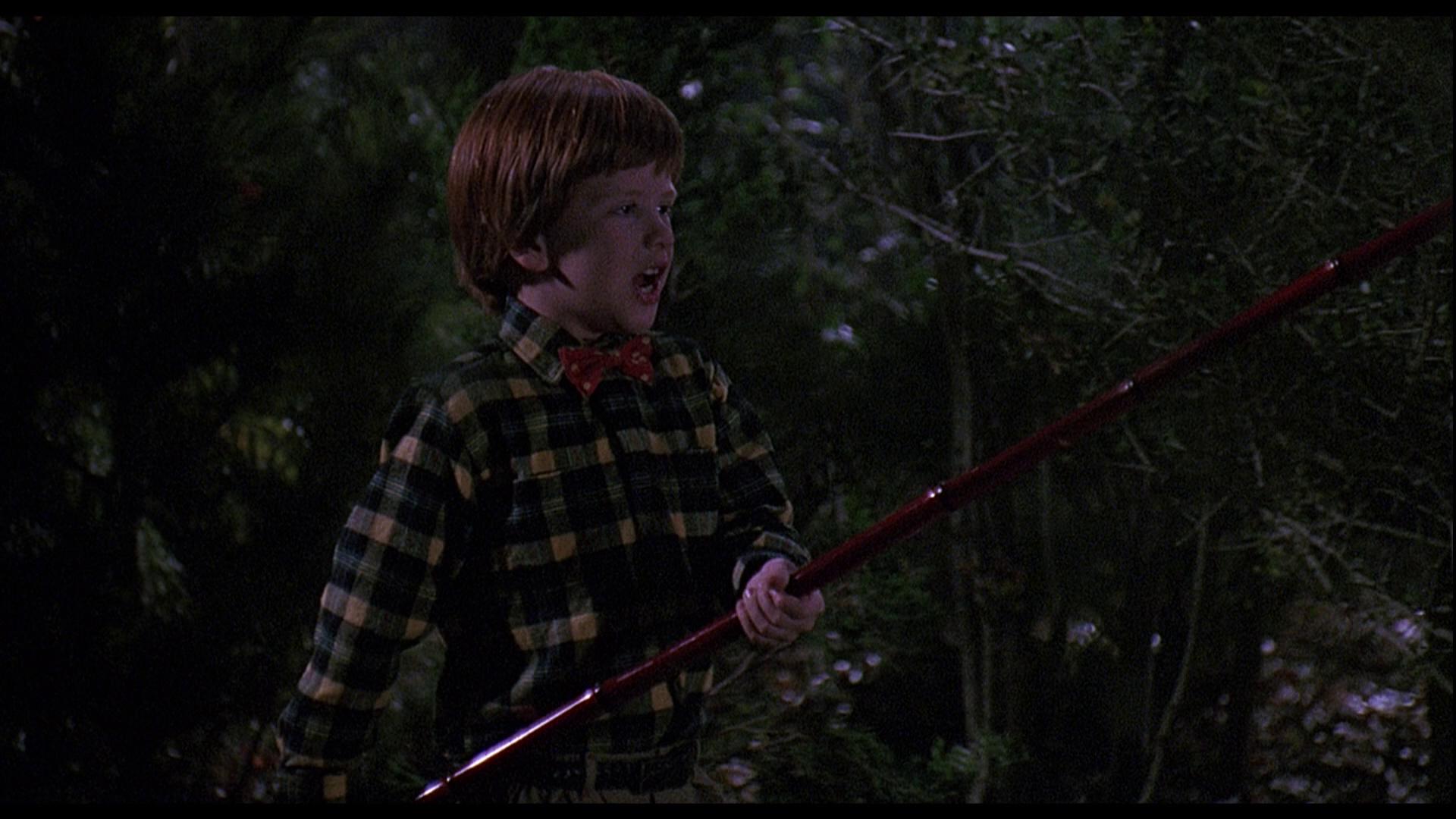 Problem Child comes packaged in your typical single-disc Blu-ray amaray case.  Within that case is the standard Blu-ray copy of the film.  The disc does not feature any artwork whatsoever, and only includes the standard text that is used to differentiate the disc from others within your collection.  There is no DVD copy nor are there any digital copy redemption pamphlets included.  There is no slipcover available with this release. 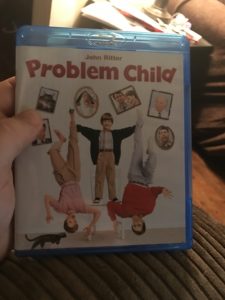 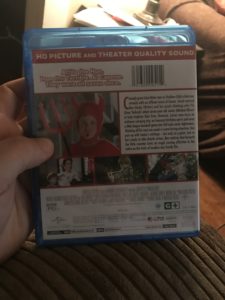 Unfortunately, there are no special features available on this Blu-ray release of Problem Child.  As a result, there is no rating for this section. 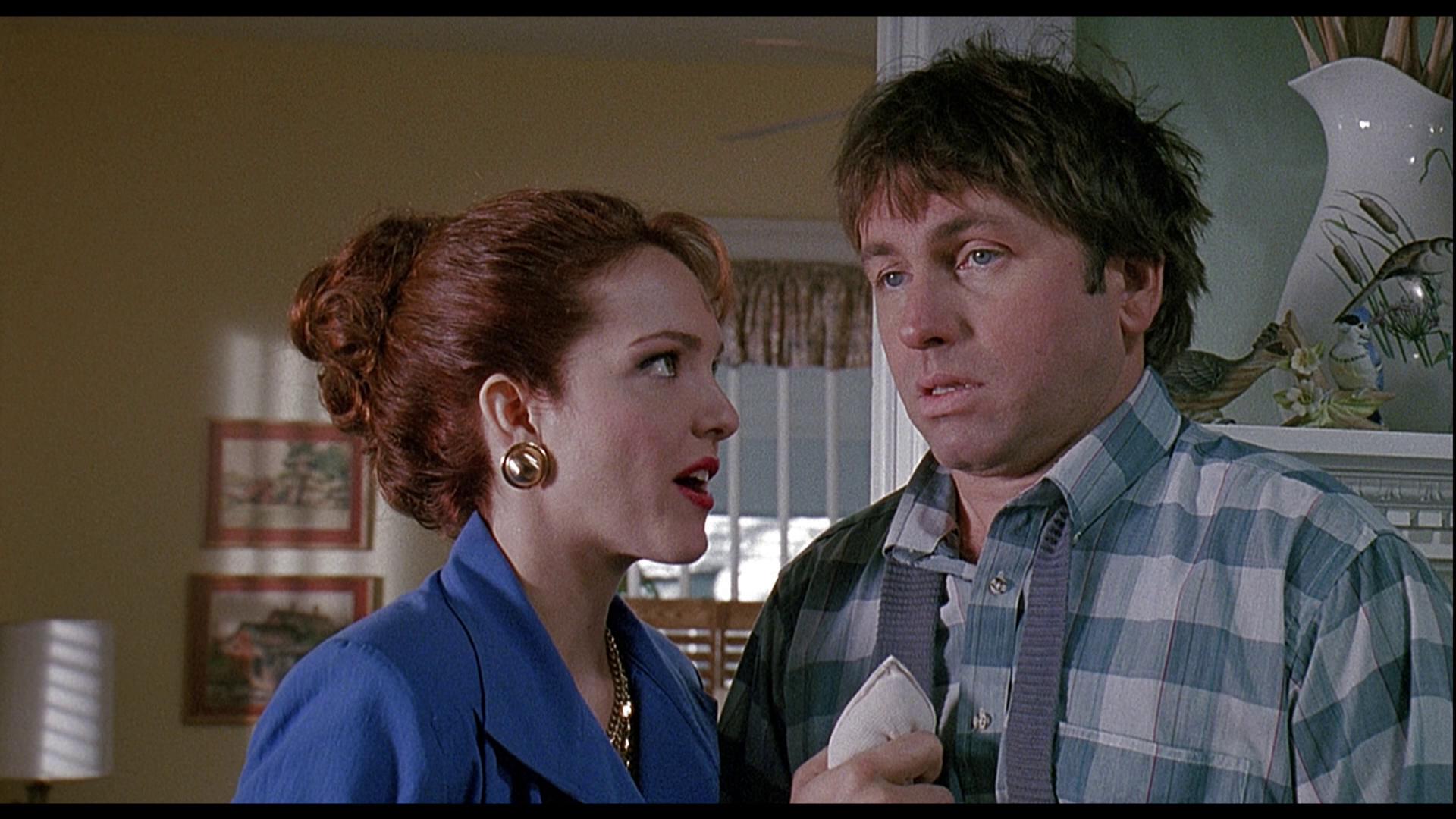 Overall, I was glad to have picked up Problem Child as it had been a bit since I had last seen it, and it was available for a really nice price.  While I didn’t find the film as entertaining as I once did, it was good to sit down and revisit.  This Blu-ray release itself is considerably bland and lacks a lot of stuff that should’ve been included, however I can definitely see that those who put the work into making the release available to us pushed this release out as quickly as possible to start making money off of it.  There’s absolutely no additional content provided, there was no focus on any of the artwork as the disc art is text only while the case art is the same exact artwork that previous releases have had.  Overall, if you can pick this up for under $10, I’d definitely recommend it.  This release is currently a Best Buy exclusive until October 10, after that it will become widely available from other retailers like Amazon.