I have, and always will be, more of an Aliens fan than anything relating to the Predator franchise, but I’ve still always held a decent amount of appreciation for the latter. One of my good friends sent me the original Alien vs. Predator Dark Horse comic series for my 17th birthday, and I enjoyed it so much that I decided to give the original Predator film a go. While a bit “cheesier” than Aliens, I still thought it was an excellent action-packed romp through the jungle with enough Arnold Schwarzenegger to keep things interesting. The 2010 reboot of the series, Predators, however, feels little more than a bland rehash of the original film, with less compelling acting performances and a plot that was honestly just too preposterous for me to become decently engaged in.

To begin, I want to make it clear that I don’t believe Predators is simply objectively poor. Exuberant fans of the series will find a reasonable amount of elements in the film to appreciate, such as the beautiful yet haunting jungle environments, well-shot action sequences, and the faithful portrayals of the titular antagonists (Alien vs. Predator (2004) did not excel in this regard). Before I rip into this film, however, let me briefly recount the plot. 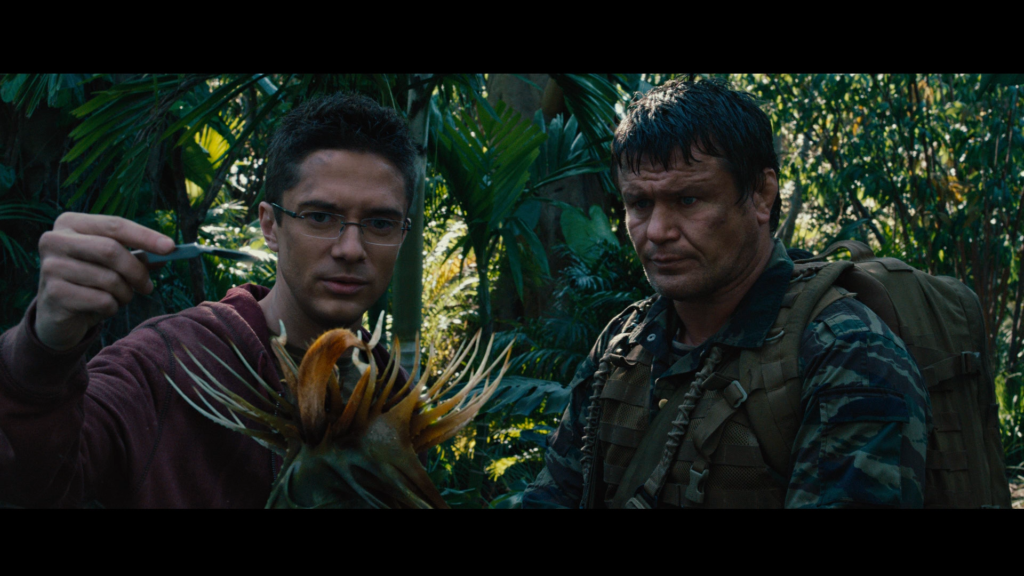 Predators commences quite suddenly with all the main characters falling from the sky into an unknown jungle and making each other’s acquaintance. None of them can recall how they got into their current situation, but they all manage to remember a mysterious light before they somehow lost consciousness and ended up in free-fall. While most of the characters have some sort of combat training and experience, a young doctor and a speechless man in a business suit appear out of place. Adrien Brody’s character, who’s name is not yet revealed, takes charge and leads the group through the jungle to try and figure out their location, and hopefully find some way of returning home. After accidentally springing some ferocious-looking traps, the group hypothesizes that they are not alone, and something “big” is lurking in the jungle. The situation becomes vastly more complicated when the group finds a way out of the jungle, and they discover a horizon full of large and unrecognizable planets. Not only are they lost; they have found themselves on a completely distinct world from Earth.

After a run-in with a pack of vicious alien dog-like creatures, Brody’s character determines that they have all been brought to this planet as hunting game; they are being stalked and examined by some unseen predator. A journey to escape becomes a journey of survival, and similarly to the previous Predator entries, the humans and alien Predators will have to use a combination of wit and combat skill to claim victory and continuity.

My forefront gripe with this film was it simply did not feel smart, and in fact, I felt I had to really set aside almost all disbelief, skepticism, and honestly logic to garner any adequate amount of enjoyment. The writing felt forced, and all too often I had to shake my head as a character would exclaim a profanity as if it were some novel joke, when I know only my 6th grade self would have any sort of humorous reaction to such a line. The overall atmosphere of the film very quickly went from mysterious and dark, to drawn-out and overall mediocrity. The film had a pace that I can only describe as awkward; I often felt scenes were either too short or inappropriately extended, leaving me to only look forward to any scene involving action and little to no dialogue. The film seemed to think it had much more serious tone to it, and would spend too much time developing the characters and plot through mundane dialogue sequences, when I felt a lot of the characters shined during their reactions and activity dealing with more stressful or action-filled situations. 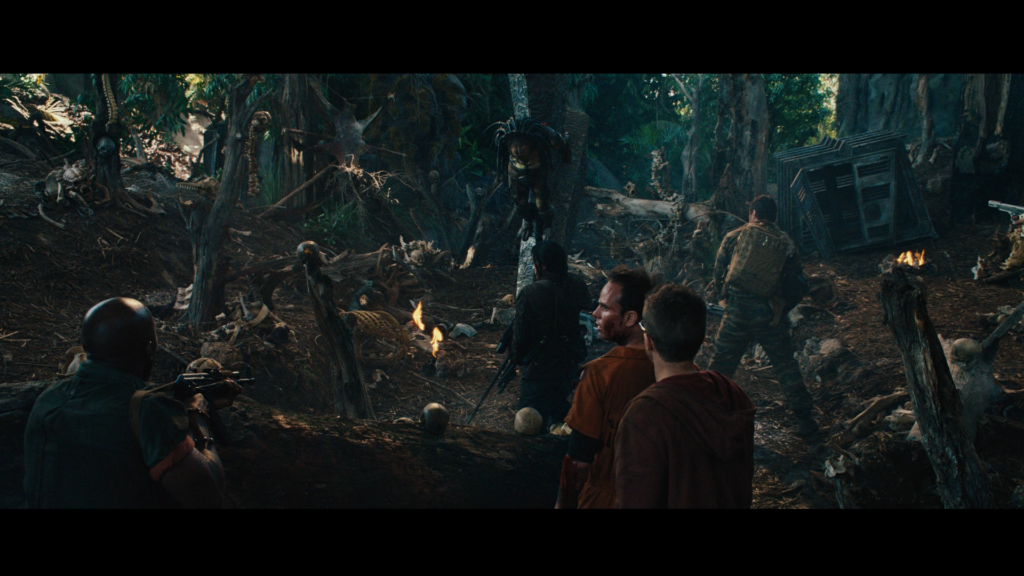 Perhaps it is because I’ve just always been into the creature-feature genre, but Predators felt absurdly predictable to me. It did very little to set itself apart from even the original Predator, and it appeared to me to mostly rely on the franchise’s popularity to even gain an audience. If this had come out under a different title, with altered antagonists, I don’t imagine it would have held any significant recognition or praise whatsoever. This is unfortunate, because I feel the whole Predator mythology is inherently rich and has plenty of room for legitimate exploration. But any appeal for Predators I feel depends almost solely on interest in the Predator franchise as a whole, and that is a fatal flaw for any sequel or reboot in my opinion. Now, this film is nowhere near Alien vs. Predator: Requiem in terms of pure irrationality and horrendous story progression, and that film actually makes Predators seem quite decent in comparison, but overall it was utterly too bland and uninspired for me to give any significant praise.

As mediocre as this film is, it did manage to impress me not only in its quality of video, but its overall cinematography. Predators contains some truly beautiful shots, and it’s crisp, sharp presentation only emphasizes the already apparent beauty. Stylistically, the film is a tad drab and lacking in dynamic color, but I would say it matches the tone extremely well, and the colors still do pop when the time is right. Close-ups show a tremendously pleasant amount of detail, and the jungle environments are equally detailed and vibrant. I would also say there is enough environmental variance (it’s not all just jungle) to keep the eyes interested, and I never felt blurriness or grain make a significant appearance to impact the image quality. 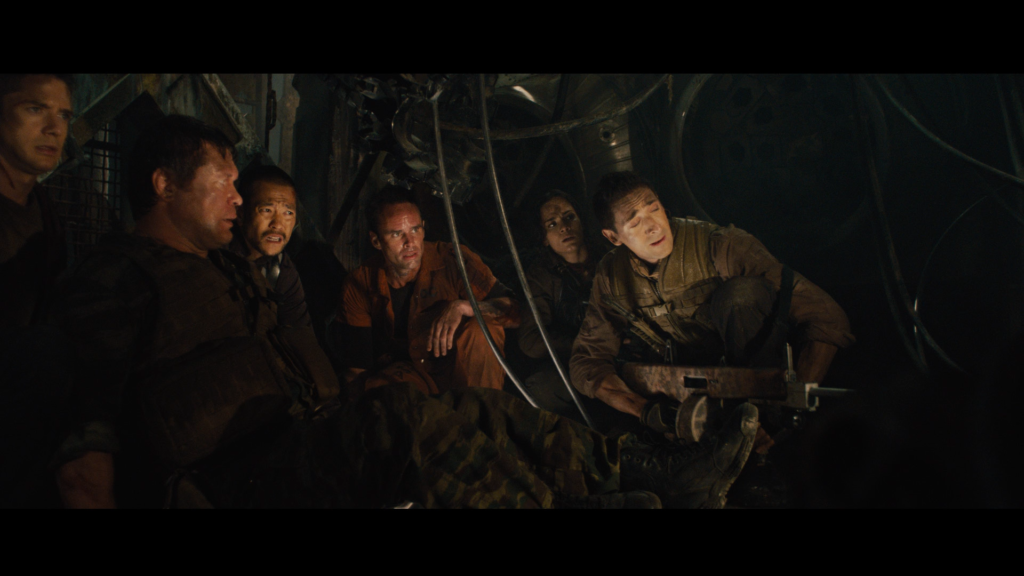 While not as magnificent as the video, the audio of Predators is about on-par with most of the quality Blu-ray releases out there. Gunshots are clear and have a fair amount of power behind them, jungle ambience is pleasant when it is present, and overall dialogue is clear and mixed well into the track. At times I will say certain effects and noises sounded a bit muddled, but for the most part this Blu-ray has excellent audio that will sound terrific on any decent system. 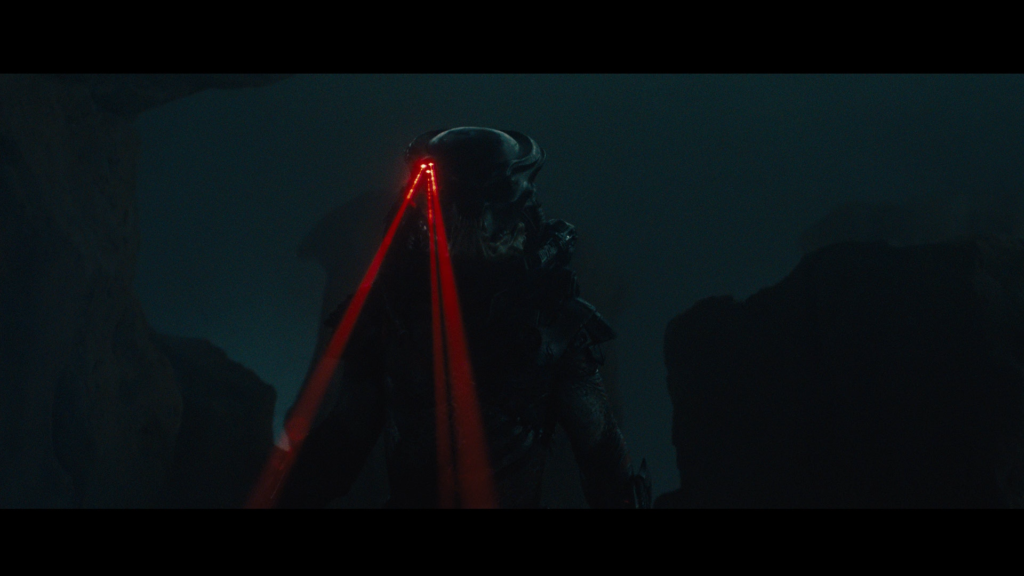 This release of Predators features very basic packaging in the form of an eco case and a cover depicting one of the alien predators in a shadowy side-portrait. Arguably, this promises a tone not terribly present in the film, but that’s honestly just me being nitpicky. The release features a main Blu-ray disc and a DVD disc that only contains a digital copy to be transferred to your computer, rather than being a playable disc. A digital copy code is also included, but in a time where digital codes have become not only the trend but the mainstay, the additional disc feels a bit irrelevant. 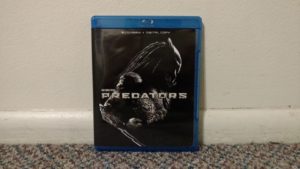 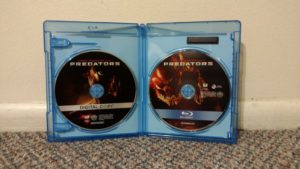 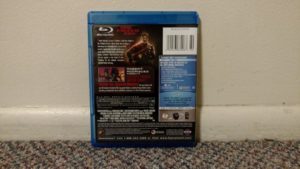 The included features are also on the light side, with one exception. There is an audio commentary with director Nimrod Antal and producer Robert Rodriguez, two “motion comics” in the form of Moments of Extraction and Crucified (briefly depicting the backstories of the characters and one of the predators, respectively), a small featurette titled The Chosen (giving brief descriptions and profiles of the humans brought to the hunting planet), nine deleted or extended scenes, a theatrical trailer, and small Fox promo for the film. Also included, and the most interesting of the bunch, is a 40-minute documentary of the making of the film called Evolution of the Species: Predators Reborn. This feature gives a fairly detailed look on the entire production of the film, and is certainly the stand-out extra in terms of production quality and relevance. The motion comics were a nice addition, but ultimately feel a little slapped-on and don’t actually do a whole lot in clarifying the muddled film.

During my viewing of this film, I think I learned that it takes bit more than some action (despite their impressive presentation) and science fiction to impress me. In all honesty, I feel that there are many people out there who would enjoy this film; it’s uncomplicated and delivers on it’s promise of testosterone-fueled adventure and combat. However, for those looking for an action flick with a more compelling premise and elaborate storytelling, I’d have to recommend looking elsewhere. This release does provide a solid audio/visual presentation, so enthusiastic Predator fans will find genuine value in this Blu-ray, especially at its current price.