Pokemon: a name that has been around since the mid-90’s. This series of movies, TV shows, and card and video games allows kids to join alongside the adventures of Ash Ketchum and his quest to become a Pokemaster.  The series originated with the release of two video games that were created by GameFreak and since then, the name has blown up all over the world.  Sparking various expansions to the original story, and allowing for multiple children to continue to follow along.

Originally released in 1998, Pokemon: The First Movie consisted of three segments; Pikachu’s Vacation, Origin of Mewtwo and Mewtwo Strikes Back, the original 75-minute feature.  The featurette was later added as a special feature in the US release of the TV special.

Although Pokemon itself was extremely popular in the US, the English version of this film received quite a bit of negative feedback. However, it was ultimately a box office success as it topped the box office charts its opening weekend and eventually grossed $163.6 million worldwide. 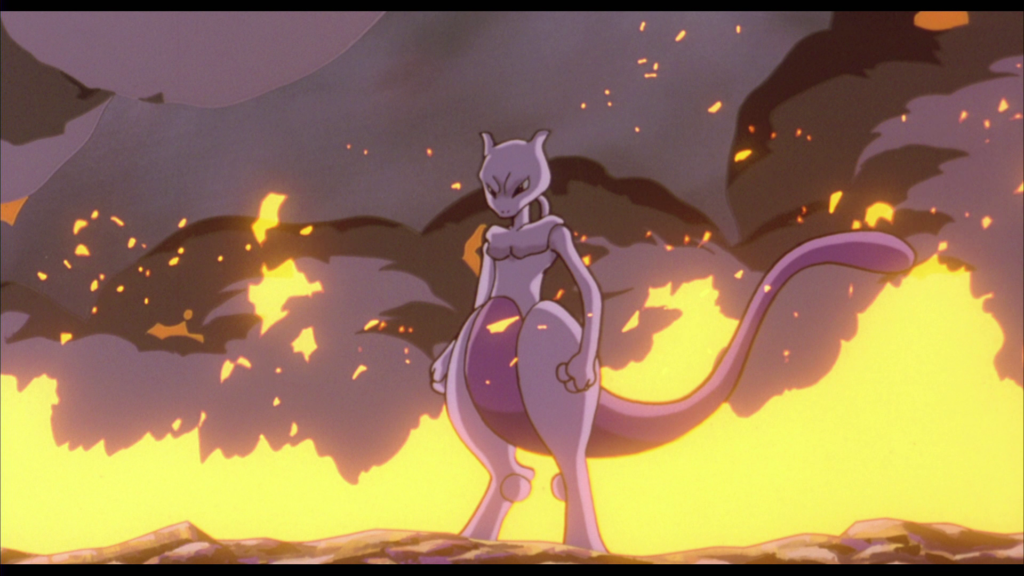 Pokemon: The Movie 2000 was released to the US in 2000, despite originally releasing in Japan in 1999, and offers us a further continuation of the adventures of Ash Ketchum.  Introducing several new characters including Lawrence and Tracy, we follow the trainers through their journey on the Orange Islands.  The English version of the film was distributed by Warner Bros. in association with Nintendo, and ultimately earned less at the box office than its predecessor despite having an increased promotion detail and overall better critic responses.

Lastly, the third cinematic installment of the franchise is Pokemon 3: The Movie, which was introduced to the United States in 2001, and included the short film titled Pikachu and Pichu; the debut of the mischievous Pichu brothers.  The third movie was also the first Pokemon film to premiere in an IMAX theater.  The story brings us to the small town of Greentown and centralizes on the mysterious Unown Pokemon.  As the adventurers try to gain an understanding of what it is they found, they are tasked with solving the various mysteries that seem to be happening since its arrival.

After watching the first movie since its release onto Blu-ray, I couldn’t help but find myself overcome with a sense of nostalgia.  Considering I had grown up during the era of the original 151 creatures, I was extremely excited with the opportunity to bring this film home.  Although I didn’t remember too much of the storyline, I was glad that I sat down to watch through this.  Watching the story line unfold in front of me, I felt just like I did during my childhood.  The story-line was very well maintained for those of us who have a little to no knowledge of Mewtwo’s origins.  They did a fantastic job at introducing him.  If you grew up with the original Red and Blue Gameboy cartridges and/or watched the television series as a child; I highly recommend re-visiting the first movie! 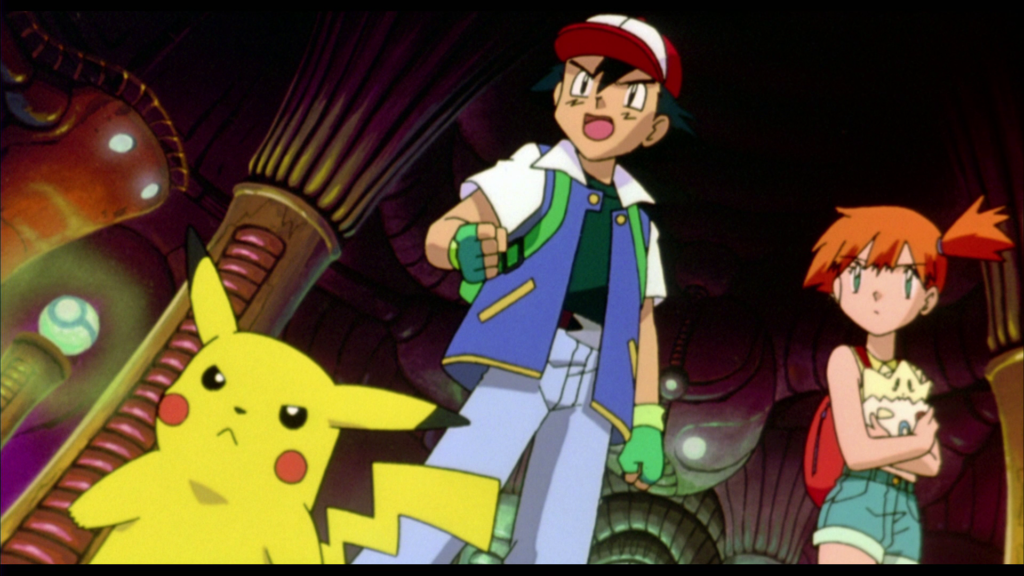 Originally, I was a bit hesitant to explore make my way into this film as I had only grown up with the original 151 Pokemon and had felt as if things had reached a point of confusion as they expanded the universe.  However, I am quite glad that I had taken this opportunity because I can certainly see why this film received the responses that it did.  Not only does it add more possibilities for expansion, but does its best at trying to build a bridge between the first film and this one.  My only personal complaint with Pokemon: The Movie 2000 is the lack of character introduction for the new adventurers.  I’m sure if I would have followed the television show past the original 151, I would have a better understanding of these peoples origin and how they got into the Pokemon Universe; however they should have covered it some more in this story. 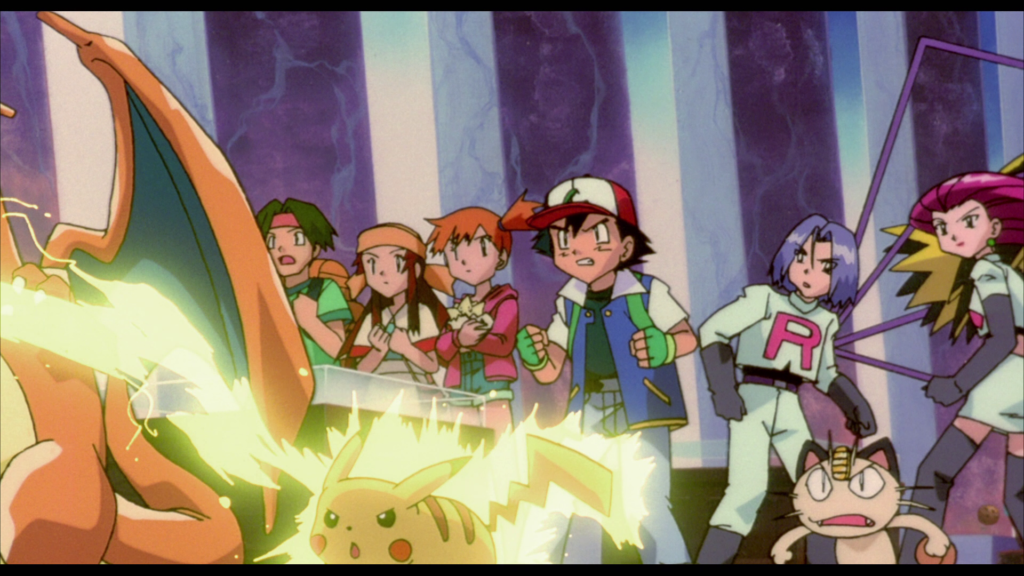 Just like the second film of this trilogy, I wasn’t sure what I was getting myself into.  Obviously my curiosity piqued as I had picked this release up, however only having an understanding of the original 151, and trying to stay true my childhood; I just felt unsure.  While I didn’t like Pokemon 3: The Movie as much as I did the previous film, it was really nice to see the continuation of the story and the expansion of the universe this saga has offered us.  If you’re like me and had only grown up with the original set of monsters and are curious to learn where things have gone since you’ve grown up; this film certainly is worth checking out. 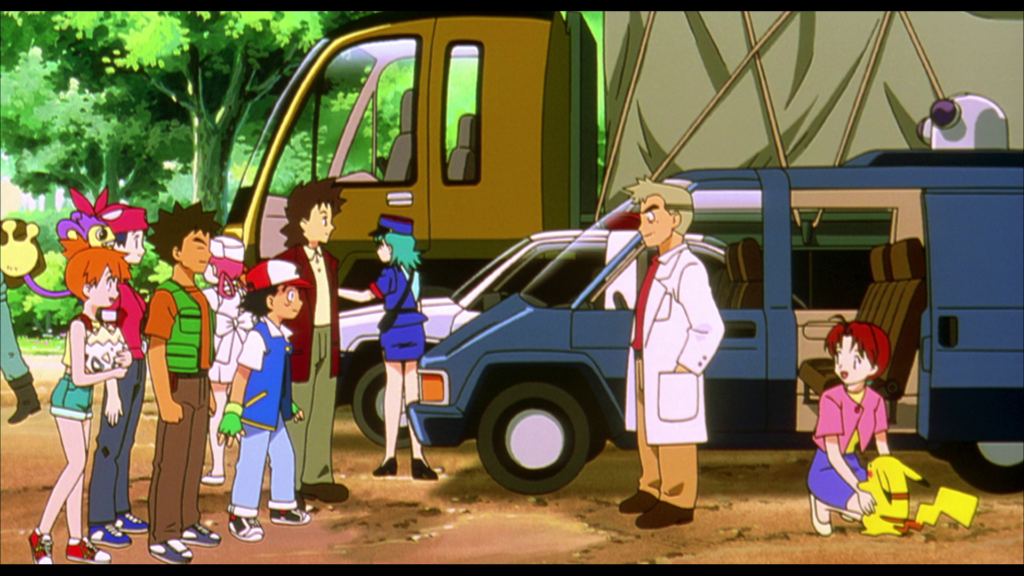 Presented in the beautiful 1080p resolution, this release of Pokemon was absolutely beautiful.  The colors really stood out, the lines felt as if they were really crisp and overall it felt as if this was a complete remastering of the original source.  The Steelbook release itself was originally released in celebration of the saga’s 20th anniversary, and I can certainly say that I happily welcomed this release simply because it was beautiful.  After watching through this film, I took a moment to dig up my old DVD and VHS releases and there is a definite difference in visual presentation. 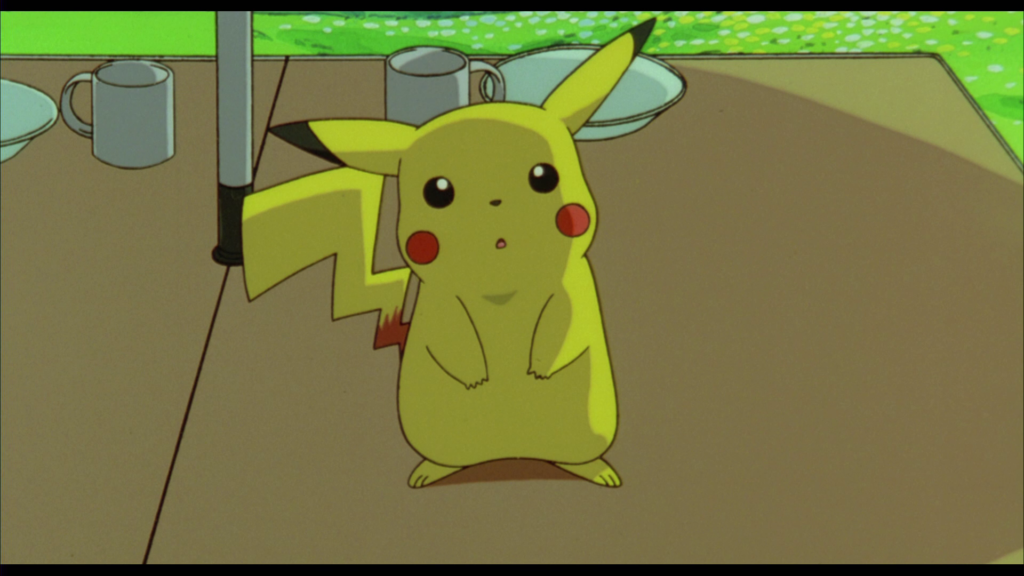 Much like the first film in this trilogy, the overall picture quality was beautiful.  It maintained the same level of crisp lines and bright colors; I cannot complain one bit about the visual presentation that it had to offer. 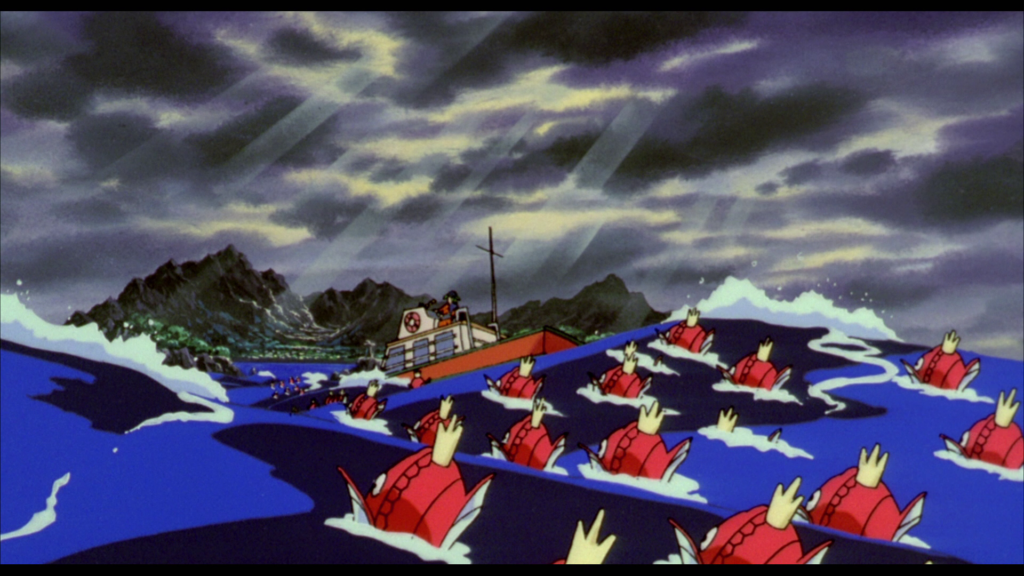 Just like the other two films that were included in this set, everything was stunning to watch.  I saw no degradation in quality as I progressed through the three films, and really hope they do in fact release more Pokemon on Blu-ray. 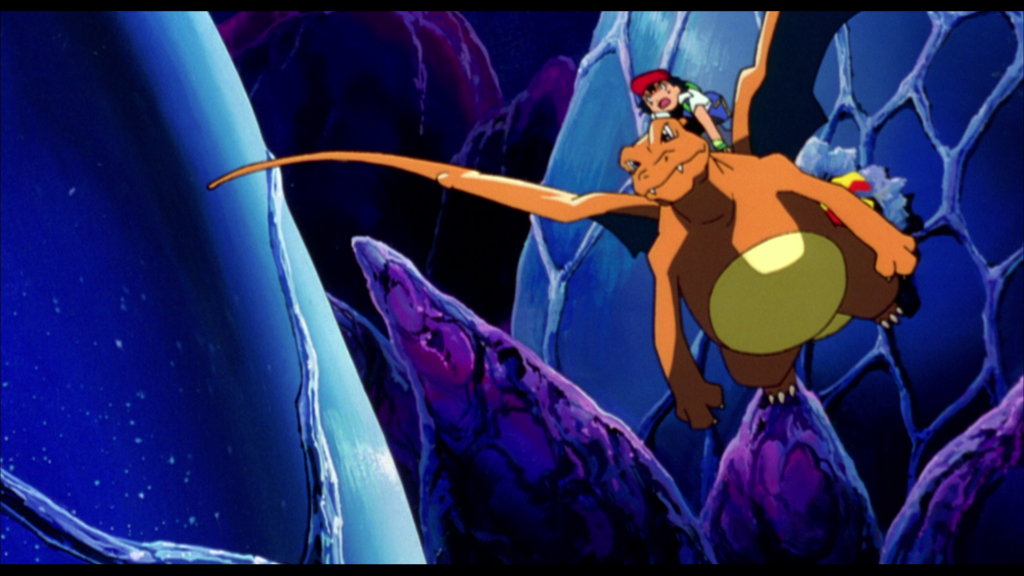 While these films are sporting a DTS-HD 2.0 track when they could have at least had a 5.1 audio track, the audio quality itself wasn’t horrible by any means.  It did make my receiver go through some extra effort in trying to figure out which channels to push various audible aspects through; however it didn’t sound too bad.  I was able to clearly understand everything as the stories unfolded on my television and I didn’t have to run manually adjust my audio once throughout the film.  My Prime Rear Satellite Speakers from SVS did an astounding job at relaying the various musical scores as they helped place emphasis on the overall undertone of what was on screen. 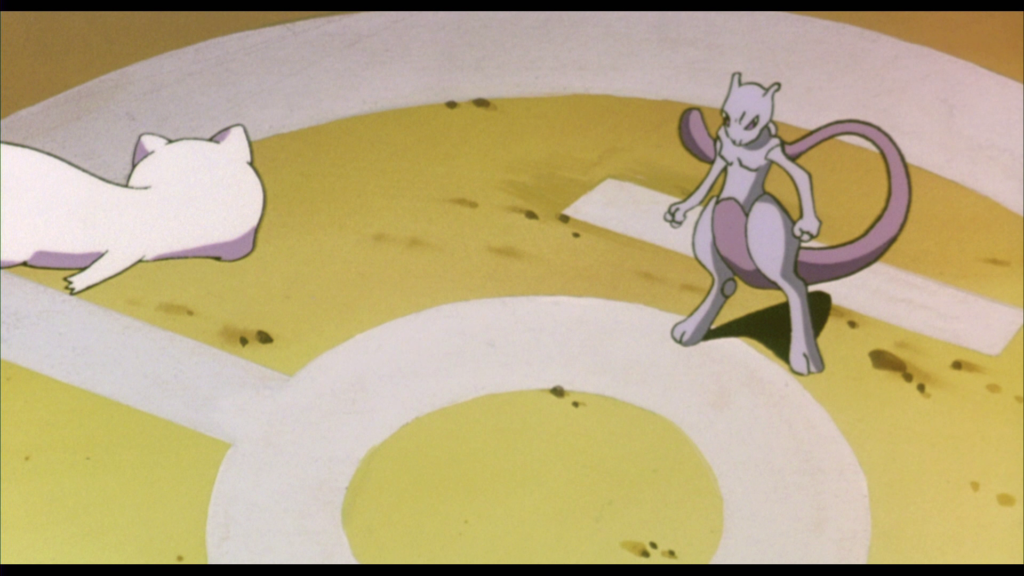 This release of the first three Pokemon movies comes packaged in a Steelbook case that houses the three discs.  While a lot of people aren’t too fond of the artwork that came with the US release as the European release has a lot of collectors yearning to pick it up; I was quite happy with it.

However the overall release itself felt as if it should have included more since it was in celebration of 20 years.  Considering the success of the franchise, they had the opportunity to go all out with a release like this, and gave us a pretty barebones set of discs.

Unfortunately there are no special features on this release.  While it is rather upsetting to see this since its release was to celebrate 20 years, it didn’t take away from the nostalgic experience these movies provided to me.

Pokemon The First Movie: There are no subtitles on this release of the film.

Overall, I was really pleased with the experience that this set had to offer for my home theater.  And I’ll be honest, the only reason I picked this up was simply because of the hype that was generated after the release of Pokemon: Go.  While playing the game, I felt as if I were re-living my youth and since I had lucked out to find this Steelbook at my local pawn shop for $10, I knew I had to have it.  The visual and audible presentation felt just like it did as I was a child watching the television series.  The story was strong enough to maintain my attention and it truly was a great opportunity to feel like I was a kid again.  While these films are only available on Blu-ray in the Steelbook in the US, the set is going for a price tag of $34.95 on Amazon.  However the UK is getting their release of the trilogy in Steelbook in November.  It should be noted that the UK release isn’t confirmed to be Region Free; so import at your own discretion. 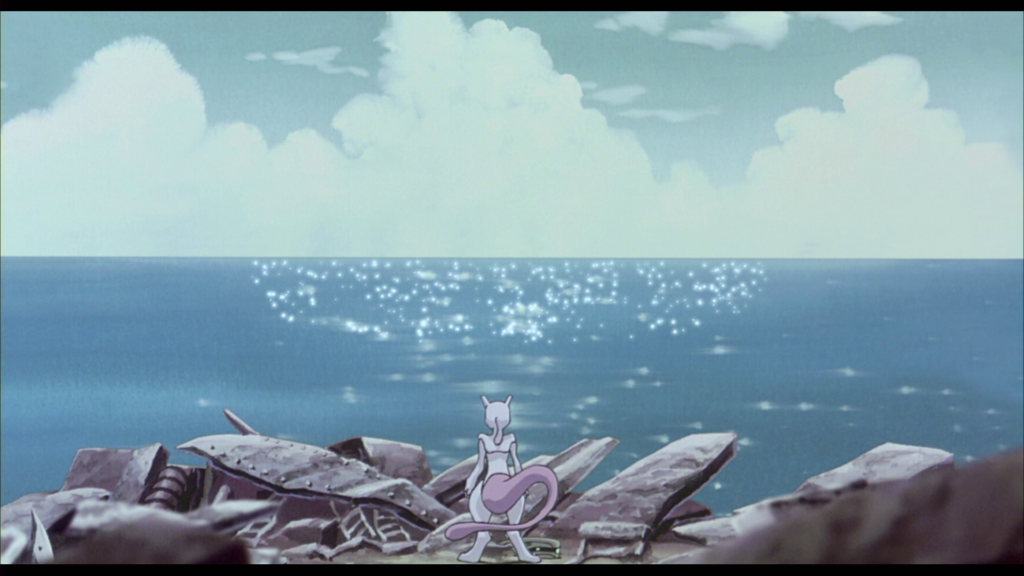