The Good Dinosaur is the closest thing that Pixar has ever made that I could consider a film that “flew under the radar”. The film, directed by first time Pixar director Peter Sohm, massively underperformed compared to its fellow Pixar animated features. We could sit around and hash out why – the film had a director turn around, Disney never really marketed it, Jurassic World already filled 2015’s dinosaur niche, who knows. Bottom line, is the movie good? 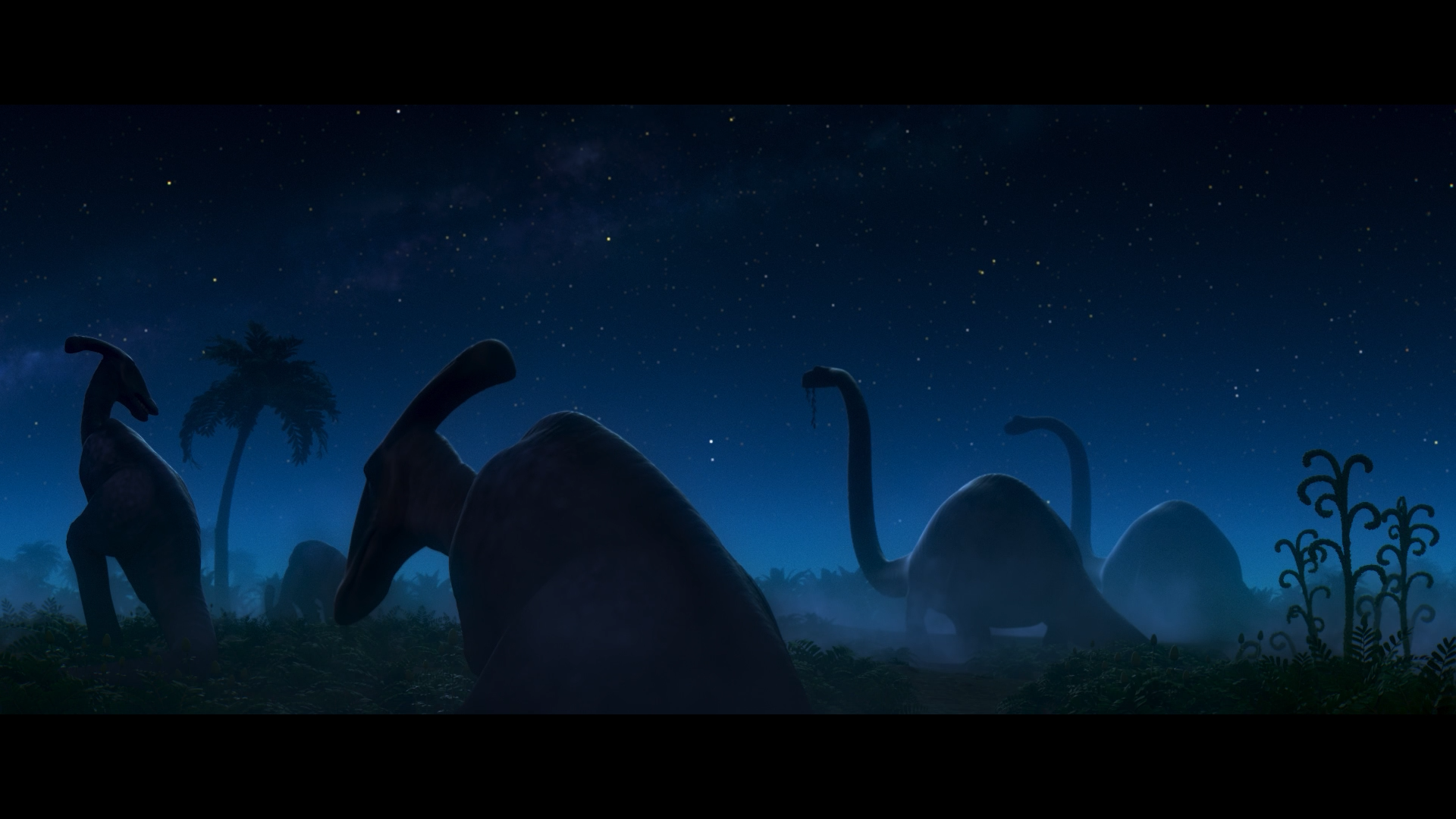 The Good Dinosaur is a movie that takes place in an alternate universe Earth, one in which the comet that eradicated the dinosaurs misses, and dinosaurs become the dominant species on Earth. Over the course of 65 million years, they learn to farm and herd cattle just like us humans did. Our story focuses on a family of corn farming dinosaurs who have three children, two normal, and one that is smaller and frailer, Arlo. Arlo struggles to keep pace with his larger, stronger siblings, often leaning on his father for support in life. His father, trying to force him to meet his potential, tasks him with eliminating a pest who has been eating their crops. In an attempt to catch the creature that has been antagonizing them, Arlo gets washed away from home, and is forced to team up with the very creature that got him into this mess so that they can both return to their families. 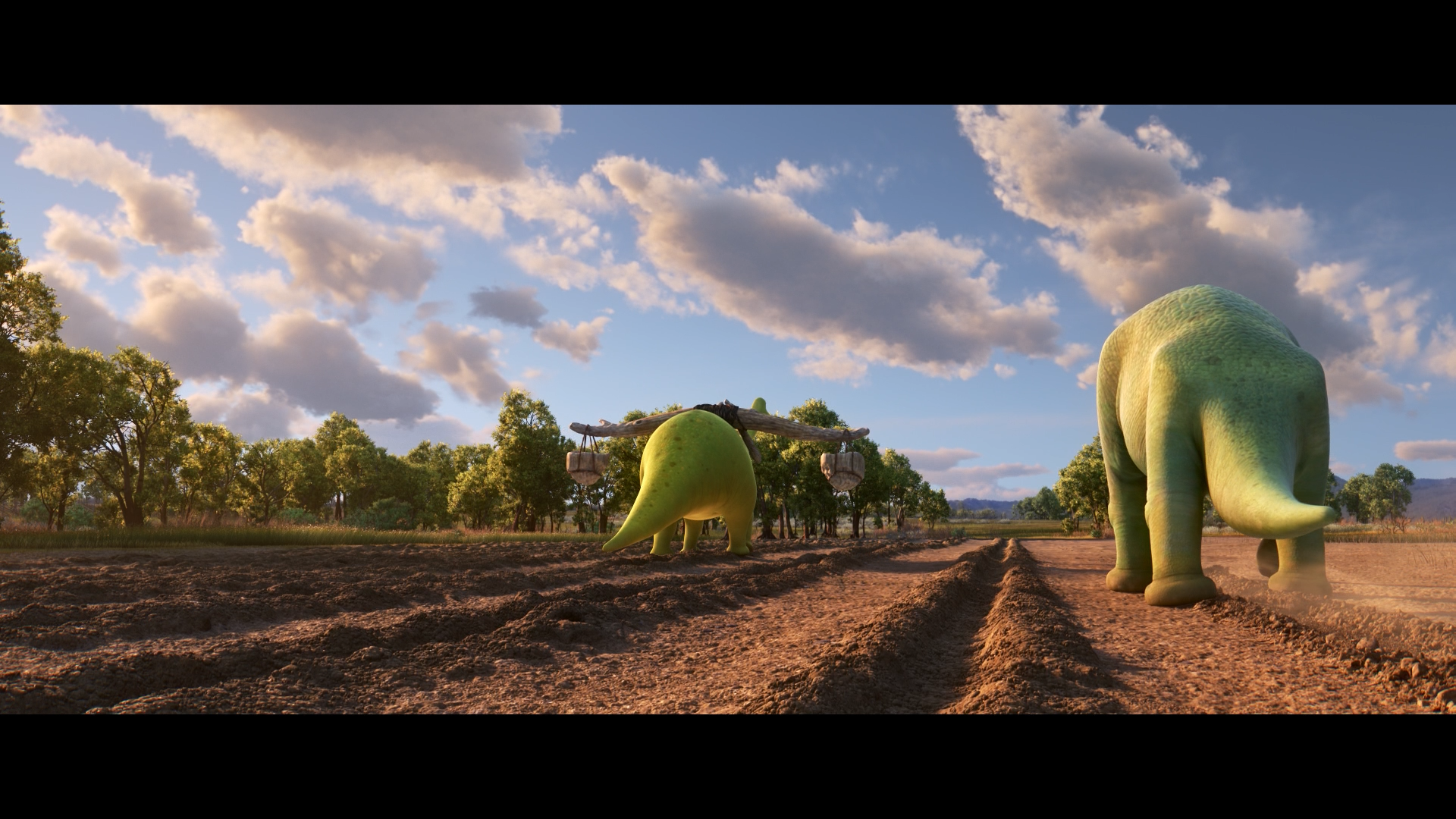 The story is conventional, hitting all of the typical plot points, like Arlo losing a loved one early on which spurs him on his hunt, scenes in which Arlo and the creature, Spot, must learn to get along and put aside their differences to survive in the wild, and a fairly basic character arch. The film’s writing is fairly conventional, with most of the film being presented visually, because of language barriers between our two lead characters. Nonetheless, the script is strong, and supports the rather basic story structure. The movie does end up being charming, funny, and in the end, rather heartwarming.

The voice cast, full of talented actors such as Jeffery Wright, Frances McDormand, Anna Paquin, Sam Elliot, and newcomer Raymond Ochoa are competent. Their line delivery is fun and engaging, as they bring the world of these dinosaurs to life with a fantastic human touch. The film’s score, composed by Mychael and Jeff Danna is excellent, channeling a western style of sound that fits the nature setting and adventurous tone of the film. 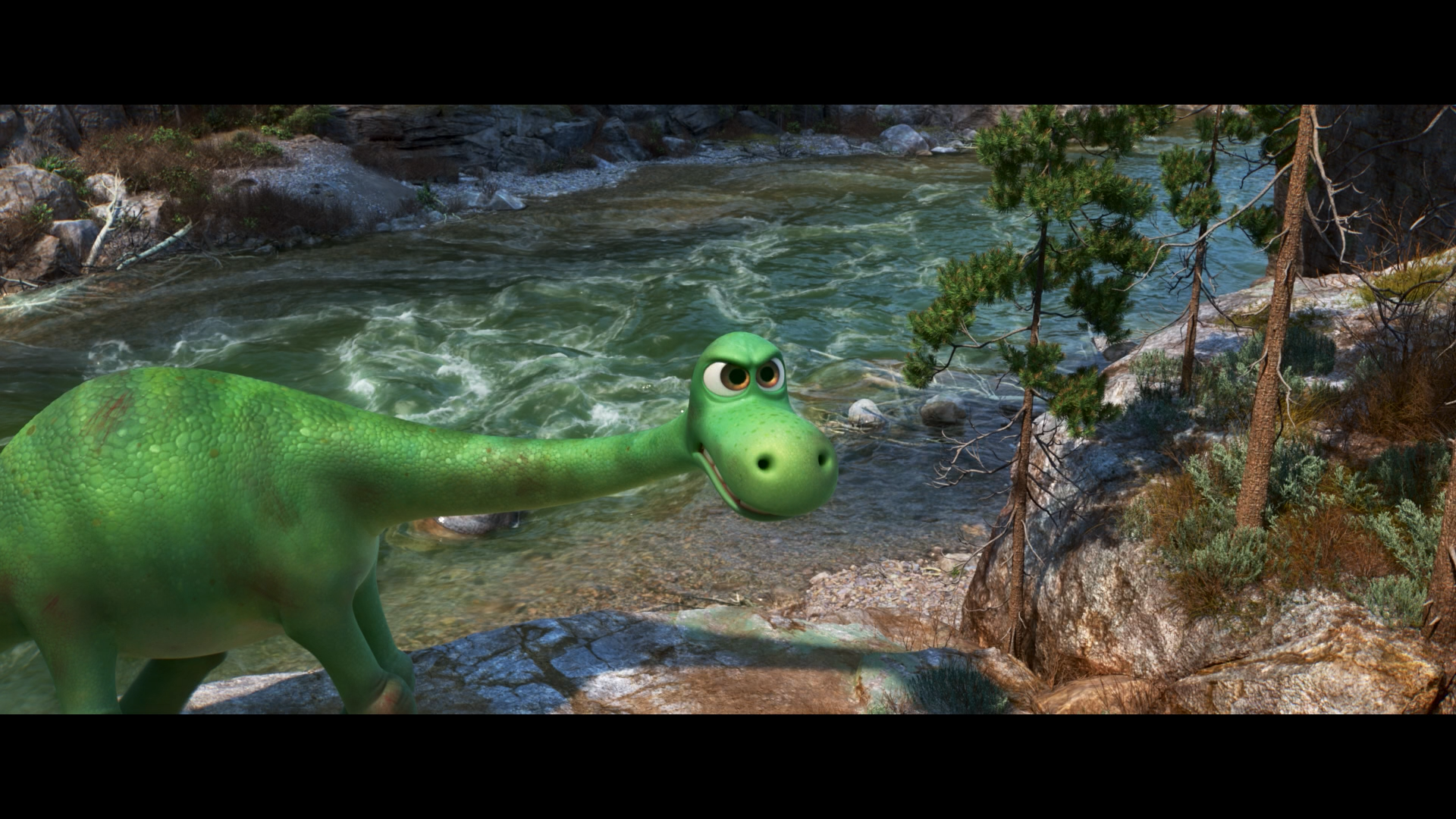 On top of that, the animation may be the closest Pixar has ever come to realism, topping the work they’ve done in past using their new software like Brave. The film favors wide shot compositions, presenting huge, beautiful vistas. In the special features it is revealed that our director grew up with the western films of John Ford, and the attempt to recreate his cinematic style is apparent in almost every shot. Detail is incredible, with many of the nature shots practically coming off as real. A few times, I had a hard time making the distinction that it was still animated.

The movie is competently made, but we need to revisit the question, is the movie good?

Yeah, it is. It’s fun, cute, and one of the most strikingly animated CG films since How to Train Your Dragon 2 hit theaters a few years ago. But that’s all it is. It lacks that deep level of commentary that your average Pixar film has, and it lacks that spark that I felt films like Cars still had. We have this huge world of dinosaurs that have taken on human qualities, and all we get to see is two groups of farmers. There’s this huge potential to explore this huge world, and Arlo’s journey sees so little of it, that even though I was satisfied, I knew that I wanted to see more. The film’s world is huge, and yet it feels like such a small scale story. 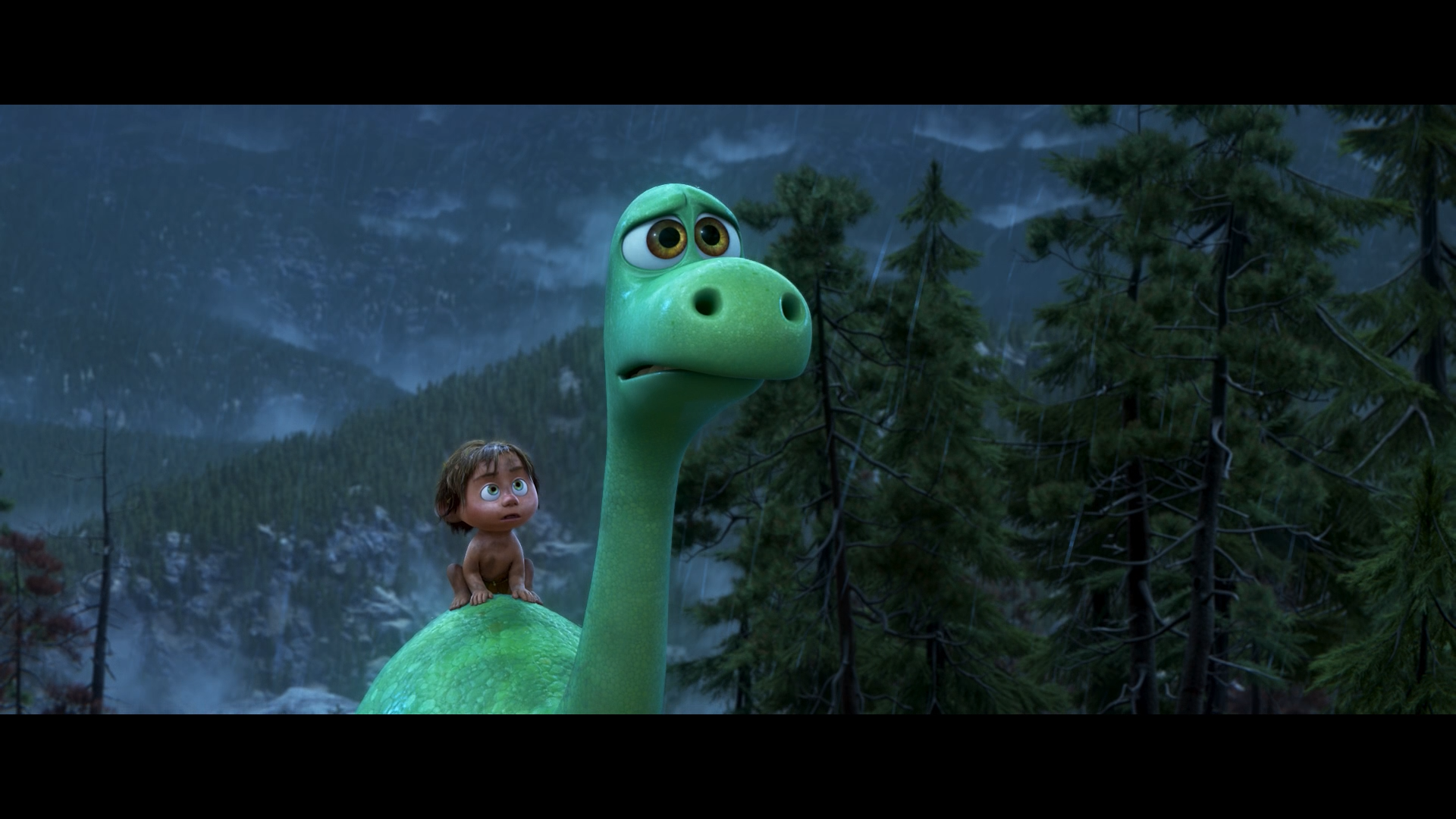 The Good Dinosaur pulled me in, and I enjoyed my screening of the film. I think kids will love it, but unlike most Pixar films, it doesn’t quite hit all the notes to draw adults in as well. We’ve seen this story a million times before, and it doesn’t feel fresh even though we’ve exchanged dinosaurs for humans as lead characters. Especially in its year of release, where we saw Pixar’s brilliant Inside Out hit theaters, The Good Dinosaur falls short of that typical Pixar greatness.

The Good Dinosaur was released to theaters in 2K digital projection format with a theatrical aspect ratio of 2.35:1. The Blu-ray maintains that 2.35:1 aspect ratio in its 1080p presentation.

Wow. The Good Dinosaur, the latest film to take advantage of Pixar’s new animation software that was rewritten during the development of the film Brave, is absolutely breathtaking. The forests and fields are full of bristling branches and detailed layers of brush all over the place. The film’s water animation, and its presentation of rock formations looks so good that I occasionally had to do a double take. 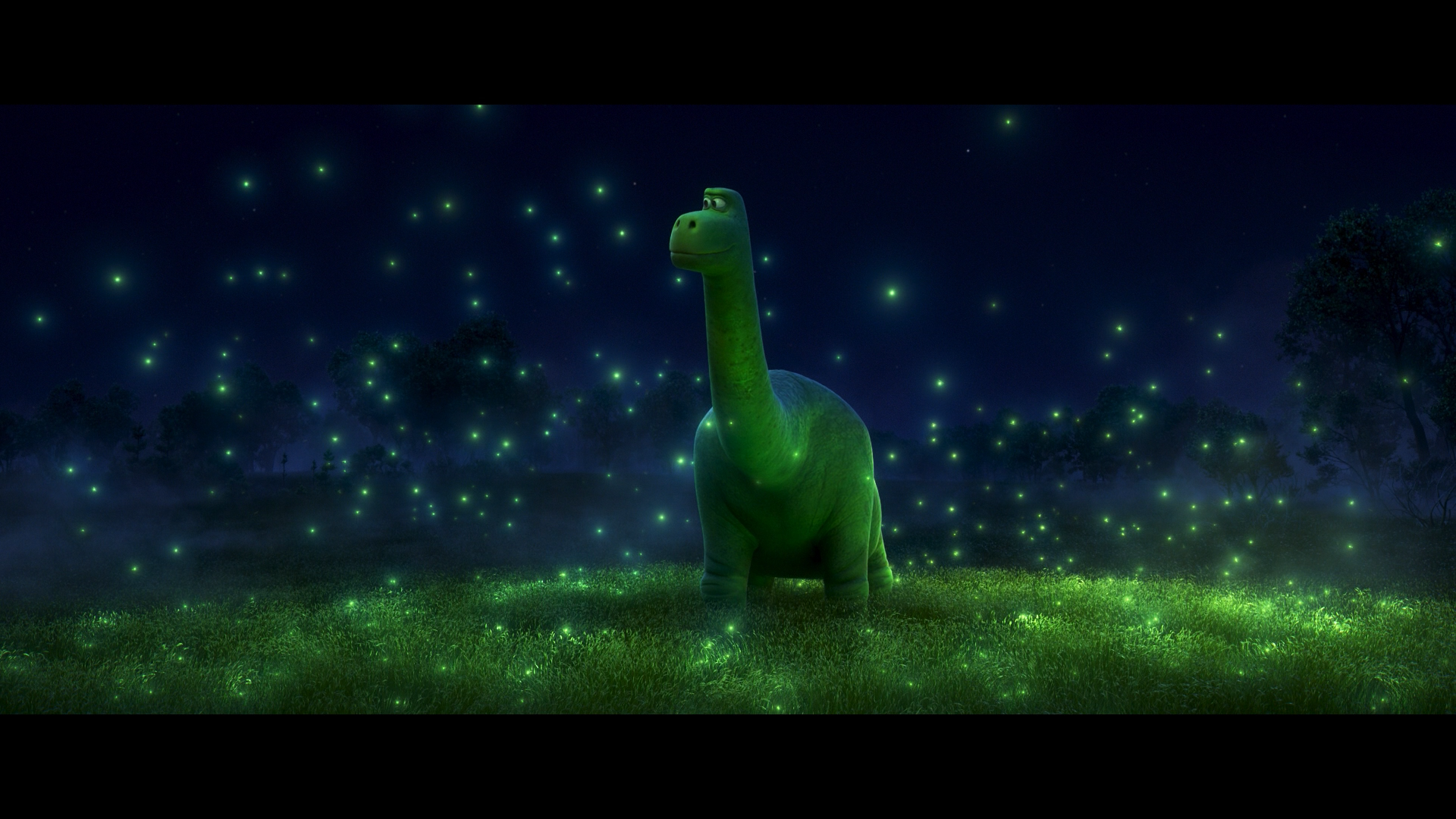 The presentation is flawless, with detail resolving with perfect sharpness, and no visual anomalies to report throughout the film’s 90 or so minute run time. Inside Out was great on Blu-ray, but The Good Dinosaur is absolutely perfection.

The Good Dinosaur is presented on Blu-ray with a 7.1 DTS-Master Audio soundtrack. For review purposes, this soundtrack was listened to through a 5.1 lossless surround sound system. 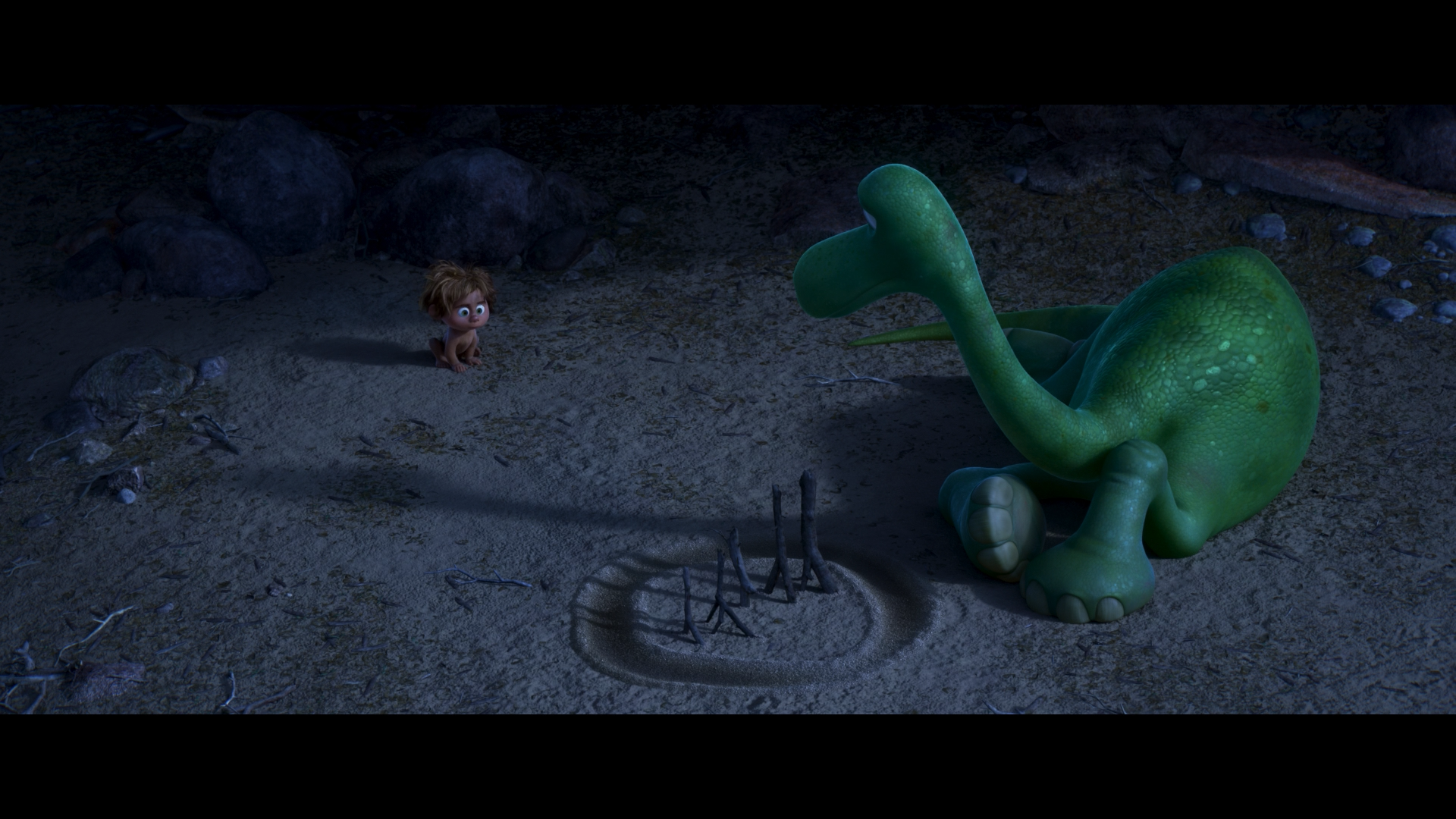 The Good Dinosaur features a rather active surround sound track, with creatures flying all around the soundscape. Water rushes through the front speakers into the surrounds with relative accuracy. Thunder booms and lightning cracks with deep, resounding subwoofer activity. The film’s score floats through the soundscape, filling in the empty spaces effortlessly. The dialogue is unambitious in that it is locked to the center channel, but that’s pretty much a standard practice now. Overall, the soundtrack is a competent one.

Pixar’s The Good Dinosaur is released on to home video in a standard blue keepcase, with a silver and blue slipcover featuring the film’s main characters. The slipcover and film’s Blu-ray case feature identical artwork, although the slipcover is glossy. The release does not feature any inside artwork, but does include the DVD and a digital copy slip. 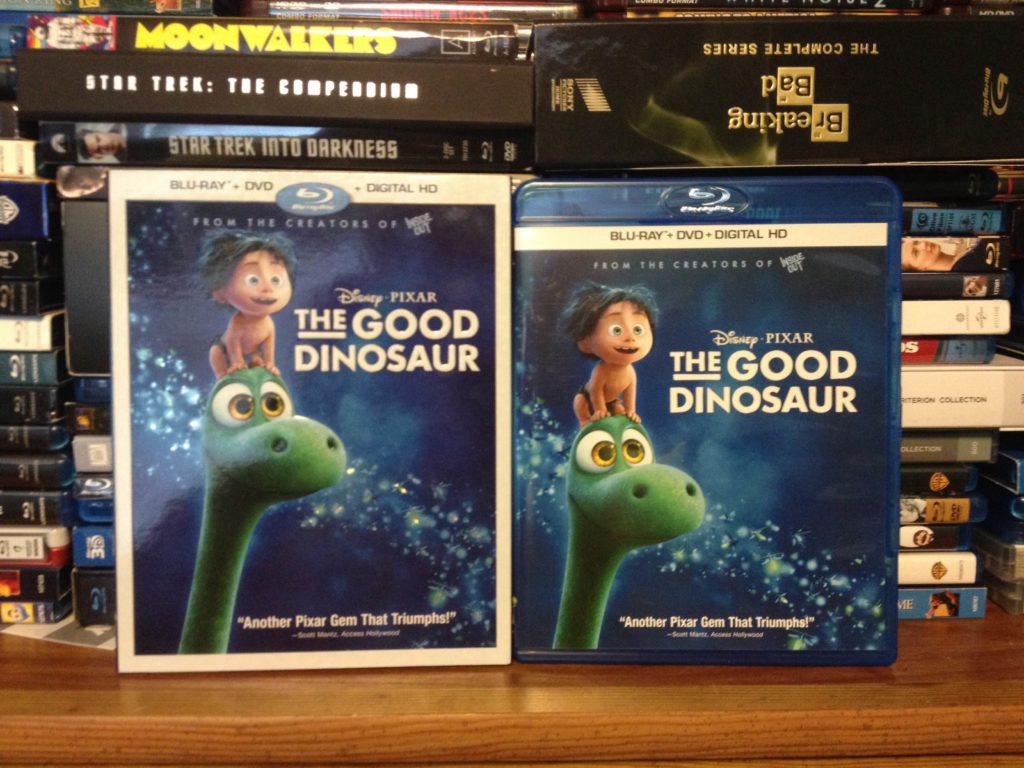 And now, the moment you’ve all been waiting for: the special features

The Filmmakers’ Journey – a seven minute look into the production of the film. It’s advertised on the back as Peter Sohm and the team sharing their experiences, but it ultimately ends up centered around Peter Sohm, and his role as a first time Pixar director, and how the crew worked with him to create the story. Short but sweet, another great look into the Pixar process.

Hide and Seek – a promotional clip, in which Arlo and Spot play hide and seek in the wilderness. Cute, but rather insubstantial.

Sanjay’s Super Team – an animated short film in which a young boy fantasizes about the gods of his faith coming alive as members of a super hero action team, uniting with him to defeat an enemy based on an 80s style kid’s action show that he was watching on TV. The short film is colorful, well animated, and features excellent sound design. It embraces spirituality in a very comfortable and entertaining way, giving us a glimpse into someone’s personal faith that we don’t often get exposed to in animation. 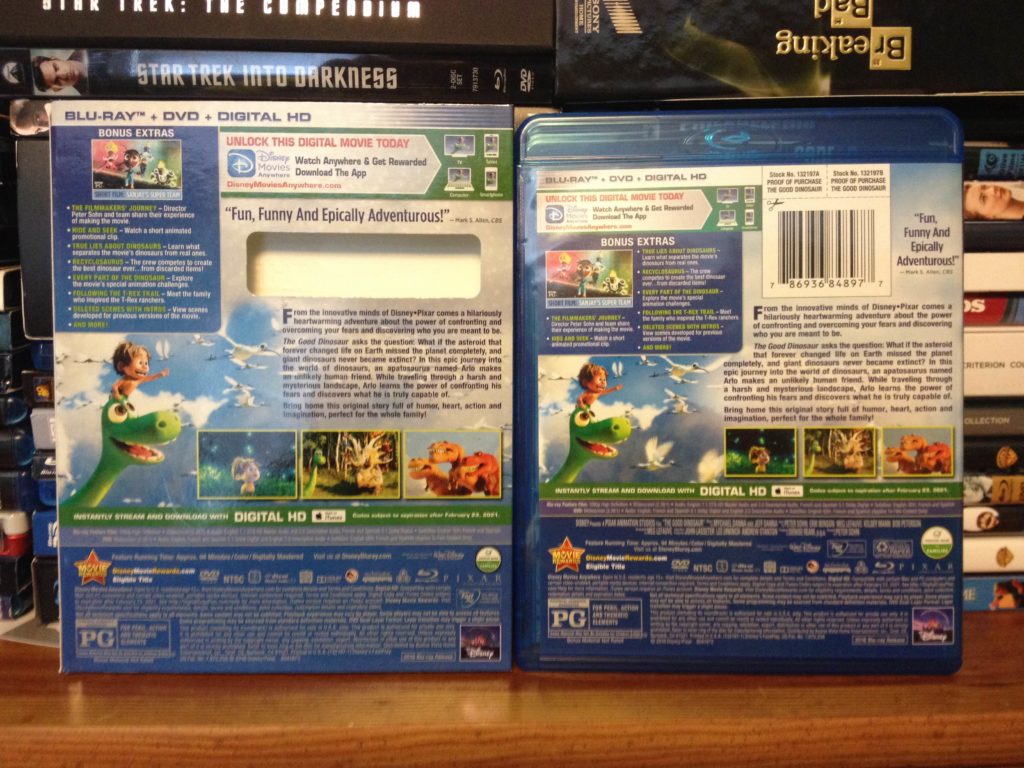 Following the T-Rex Trail – a quick feature about the family that the T-Rex cattle ranchers were based off of, and the two day trip that the filmmakers made to go visit them, and how the characters were created based on some of the people they met there.

Recyclosaurus – the crew of the film, and the entire staff of Pixar break into individual teams based on their jobs to create dinosaurs out of recycled materials from Pixar’s recycling program known as the, “free table.” Many of these come out fairly humorous, abstract, and kind of cute. They then vote on the winner in a fair style display competition.

Every Part of the Dinosaur – a feature that discusses the development of Arlo as a dinosaur-human hybrid style of character, in which he acts like a human, but looks like a dinosaur. Also explores the creation of the Spot character, who is a feral, canine version of a human.

Dino Bites – a montage of short character animation clips, set against painterly backgrounds. Seems to be a set of test footage sequences for the characters.

True Lies About Dinosaurs – a feature in which a paleontologist who works for the Wyoming Dinosaur Center talks about how dinosaurs similar to Arlo were found in Wyoming, and how they found dinosaur footprints and other various thing related to dinosaurs exist in the area. 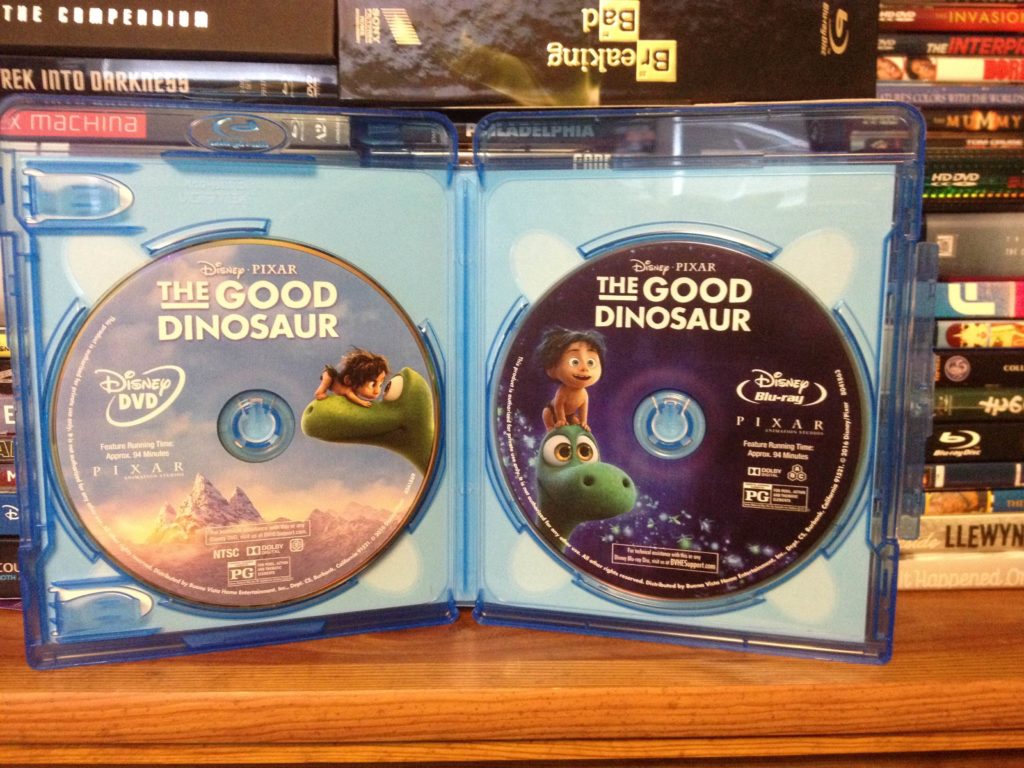 Russian Trailer – the theatrical trailer for the film, dubbed in Russian language.

Overall, these features are entertaining and comprehensive, providing a decent amount of insight into the production of the film and just what inspired its view of the world. The packaging is fairly basic, but this movie under performed pretty heavily for Disney, so I’m not too surprised. 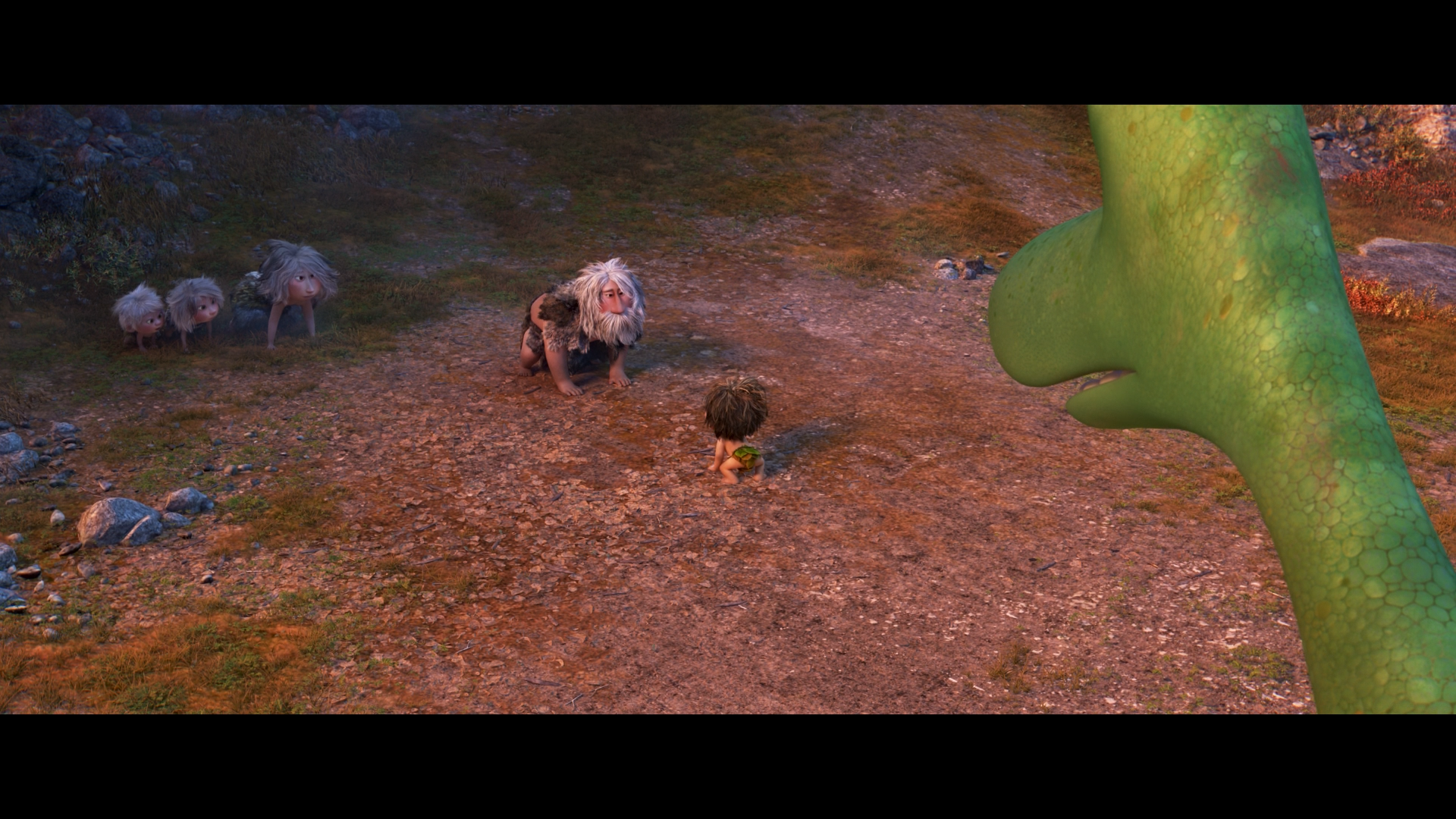 The Good Dinosaur is a good film, nothing more. It presents this huge, advanced world populated by dinosaurs, and only gives us a small taste of what is out there. The story in conventional, but satisfying and fun, with high production values all around. And yet, all I want is more. I ended the film just wanting more of this world, I just wanted to explore. That being said, the Blu-ray release is excellent, with an incredible video transfer, and a pleasing surround sound track. The special features are plentiful, and worth sitting through for fans of the film, and even a few that appeal to everyone. The packaging is, like the movie, just alright. Nothing spectacular. Is the movie incredible? No, but because I still enjoyed what it brought to the table, I’m still going to recommend it.