Pirates of the Caribbean: Dead Men Tell No Tales (or as it was known overseas Pirates of the Caribbean: Salazar’s Revenge) is a 2017 American swashbuckler fantasy film and is the fifth installment of the Pirates of the Caribbean film franchise and services as a direct sequel to the 2011 film On Stranger Tides. The film was directed by Joachim Ronning and Espen Sandberg and was adapted from a script that was written by Jeff Nathanson, with Jerry Bruckheimer serving again as producer. Bringing back Johnny Depp, Kevin McNally and Geoffrey Rush to reprise their roles as Jack Sparrow, Joshamee Gibbs and Hector Barbossa respectively, while adding Javier Bardem, Brenton Thwaites, and Kaya Scodelaro who joined the cast as Armando Salazar, Henry Turner and Carina Smyth. The film also features the return of Orlando Bloom and Kiera Knightley as Will Turner and Elizabeth Swann, following their absence from the previous film.

The filmmakers cited the series’ first installment, The Curse of the Black Pearl as an inspiration for the script and overall tone of the film. Preproduction for the film began shortly before On Stranger Tides was released in early 2011, with Terry Rossio writing a script for the film. In early 2013, Nathanson was hired to draft a new script, with Depp being involved in his writing process. Initially panned for a 2015 release, it was delayed to 2016 and then again to 2017, due to script and budget issues. Principal photography began in Australia on February 2015, after the Australian government offered Disney $20 million in tax incentives, and wrapped up in July 2015.

Dead Men Tell No Tales was released in the conventional Disney Digital 3D, RealD 3D and IMAX3D formats on May 26, 2017, ten years and one day after the release of the 2007 film At World’s End. Having received criticism for its complicated and convoluted plot, the performances, visuals and shorter running time were heavily praised by film critics. Some critics considered the film to be an improvement over its predecessor, while others felt the franchise had run its course. It ended up grossing $794 million worldwide and is the second-lowest gross of the series, but is the eighth highest-grossing film of 2017. 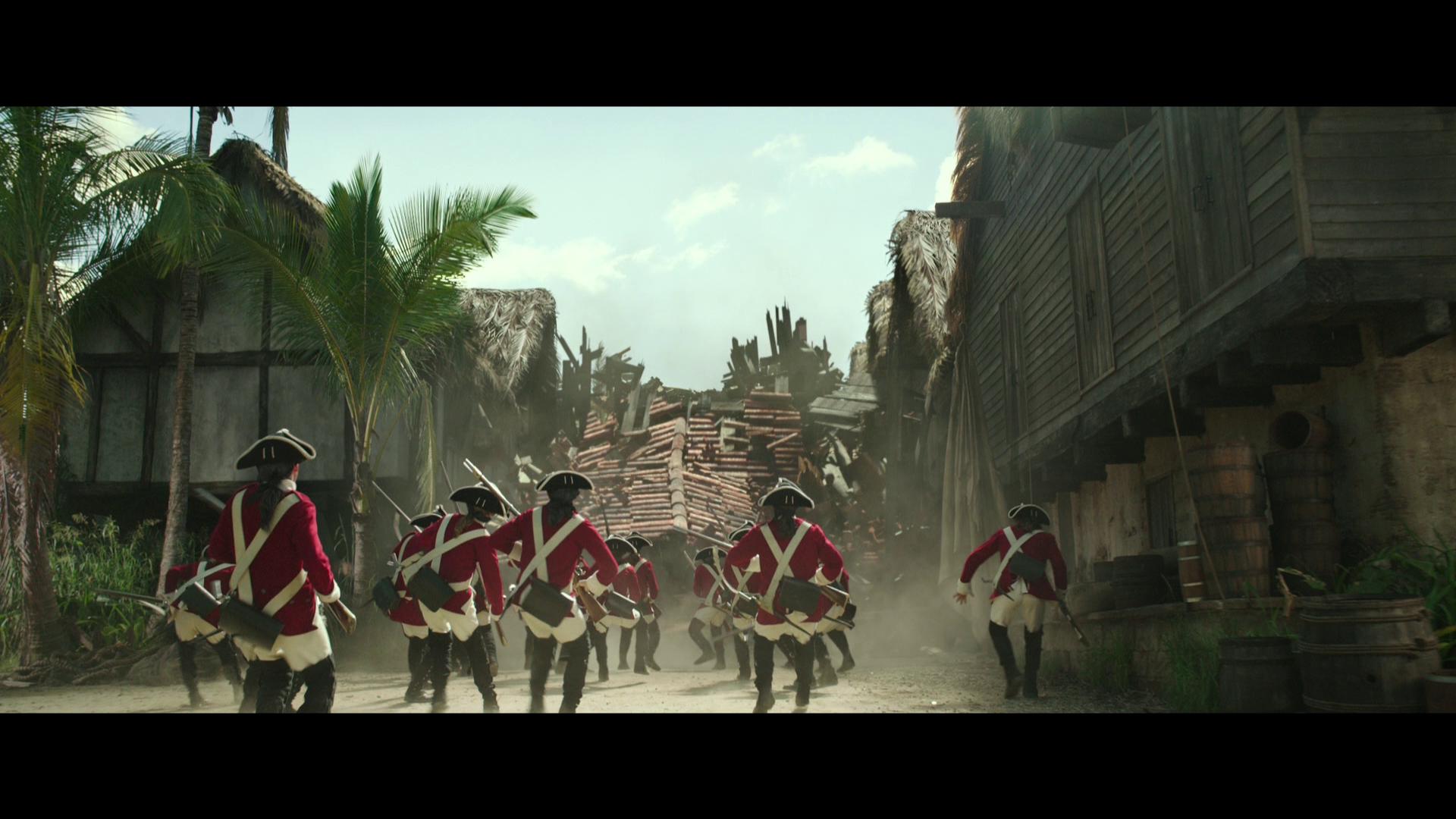 Pirates of the Caribbean: Dead Men Tell No Tales is a film that generated a lot of hype as it led up to its theatrical release.  Everyone loved the earlier films.  Then there’s this movie, one that I know I looked forward to; only to be let down by Hollywood’s attempt at using something that worked before to grab cash today.  As mentioned above, the plot is considerably complicated and convoluted making it difficult to follow.  There were quite a few times where the story strayed from its course, and tried to place more focus on Jack Sparrow’s silly antics.  As my wife and I watched through this movie tonight, we both agreed that it was obvious that Disney was using this as a cash grab and really should’ve invested into something else.

Having this film be the second 4K UHD release from Disney, Pirates of the Caribbean: Dead Men Tell No Tales did not look nearly as good as the earlier film, Guardians of the Galaxy: Volume 2.  The scenes that were portrayed in much lighter areas seemingly looked really great and clear, allowing for that overall sense of realness in the film.  However, Disney still needs to work out the kinks with the darker scenes in their releases because the scenes that were low-lit looked absolutely horrendous. 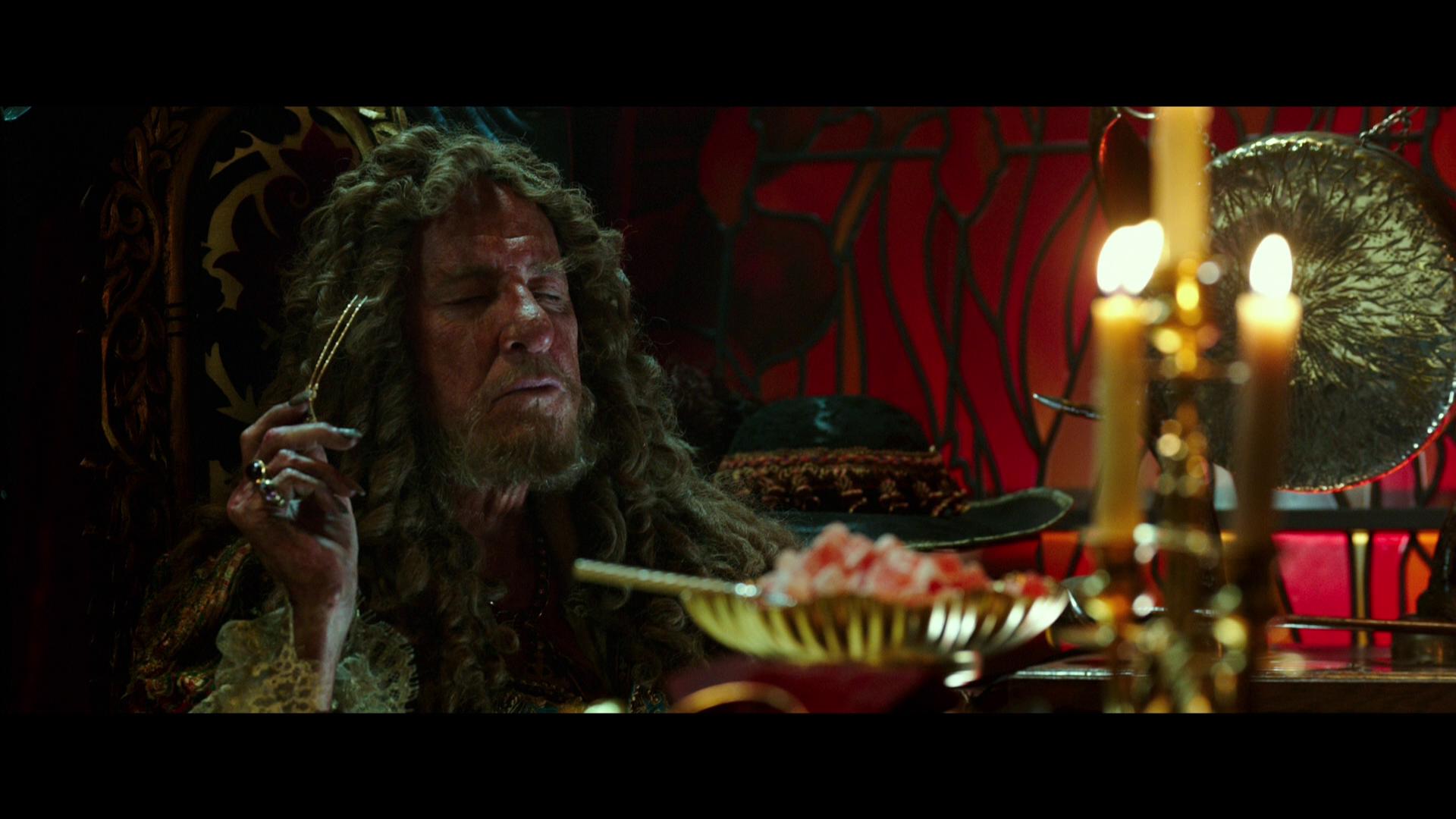 Packaged with a Dolby Atmos Audio track, Pirates of the Caribbean: Dead Men Tell No Tales does an astonishing job at offering an all out immersive experience for those who are able to make use of the technology.  Making use of all available channels, including the elevation aspect, the 4K UHD release of this film really lets home viewers to feel like they are right there in the middle of the action.  Hearing the roars of the crowd or the movement of the water from a distance was quite the surreal experience and is really appreciated by those of us here who have a full Atmos setup. 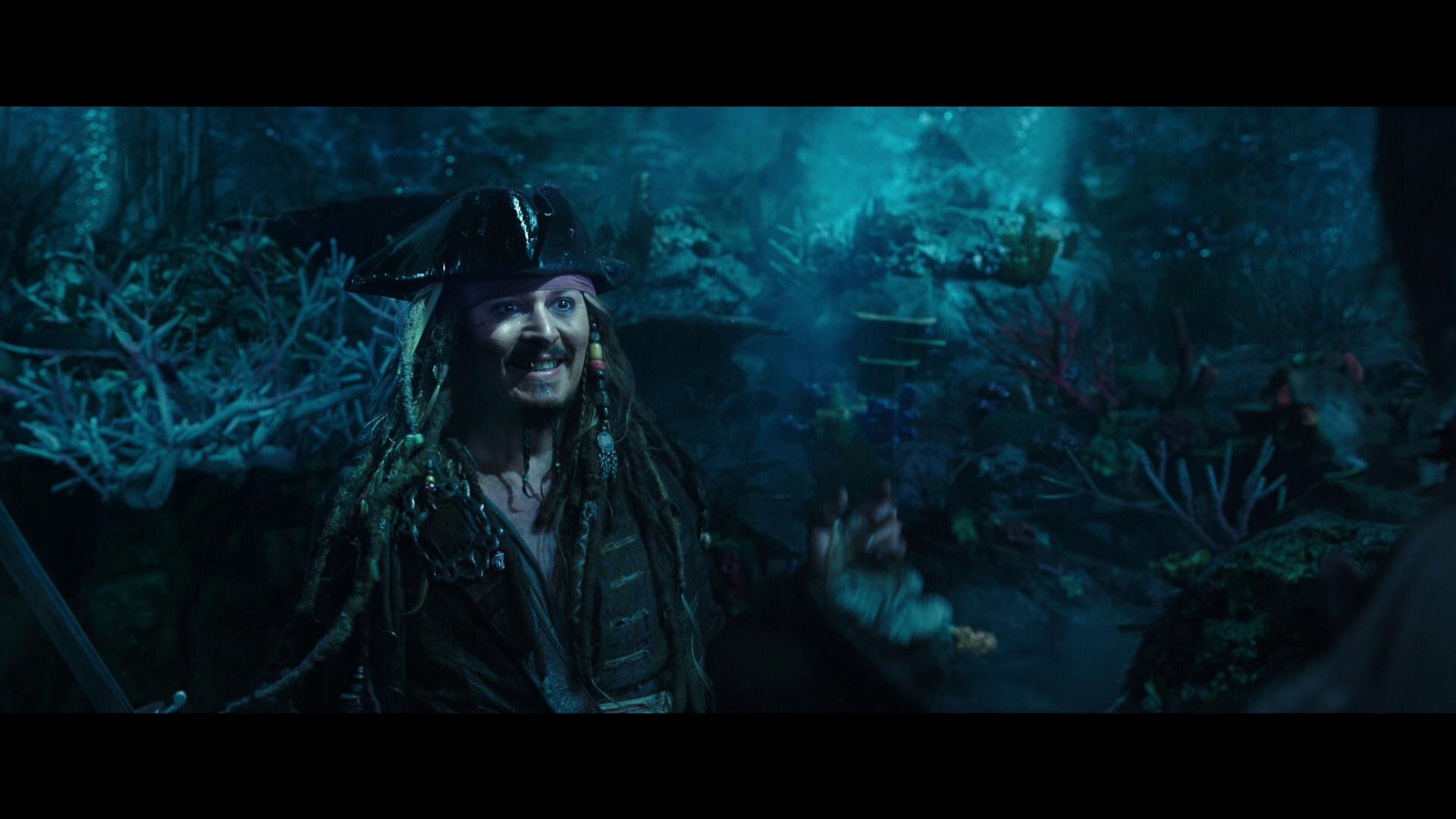 Pirates of the Caribbean: Dead Men Tell No Tales comes packaged in your standard two-disc UHD amaray case.  Contained within that case is the standard 4K UHD copy of the film as well as the standard Blu-ray copy of the film.  The 4K UHD disc does feature a piece of artwork that matches that of the case art, while the included Blu-ray disc contains no art whatsoever.  The Blu-ray disc only contains the title text and any additional text that’s standard on Blu-ray release.  There is also a digital copy redemption pamphlet that’s included for on the go streaming, as well as a slipcover with matching artwork that’s been made available in the initial pressing of this film. 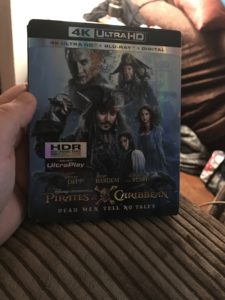 There’s a decent amount of special features that’s been made available on the 4K UHD release of Pirates of the Caribbean: Dead Men Tell No Tales that allows consumers to explore the work and behind the scenes information of the film.  Included with this release is: 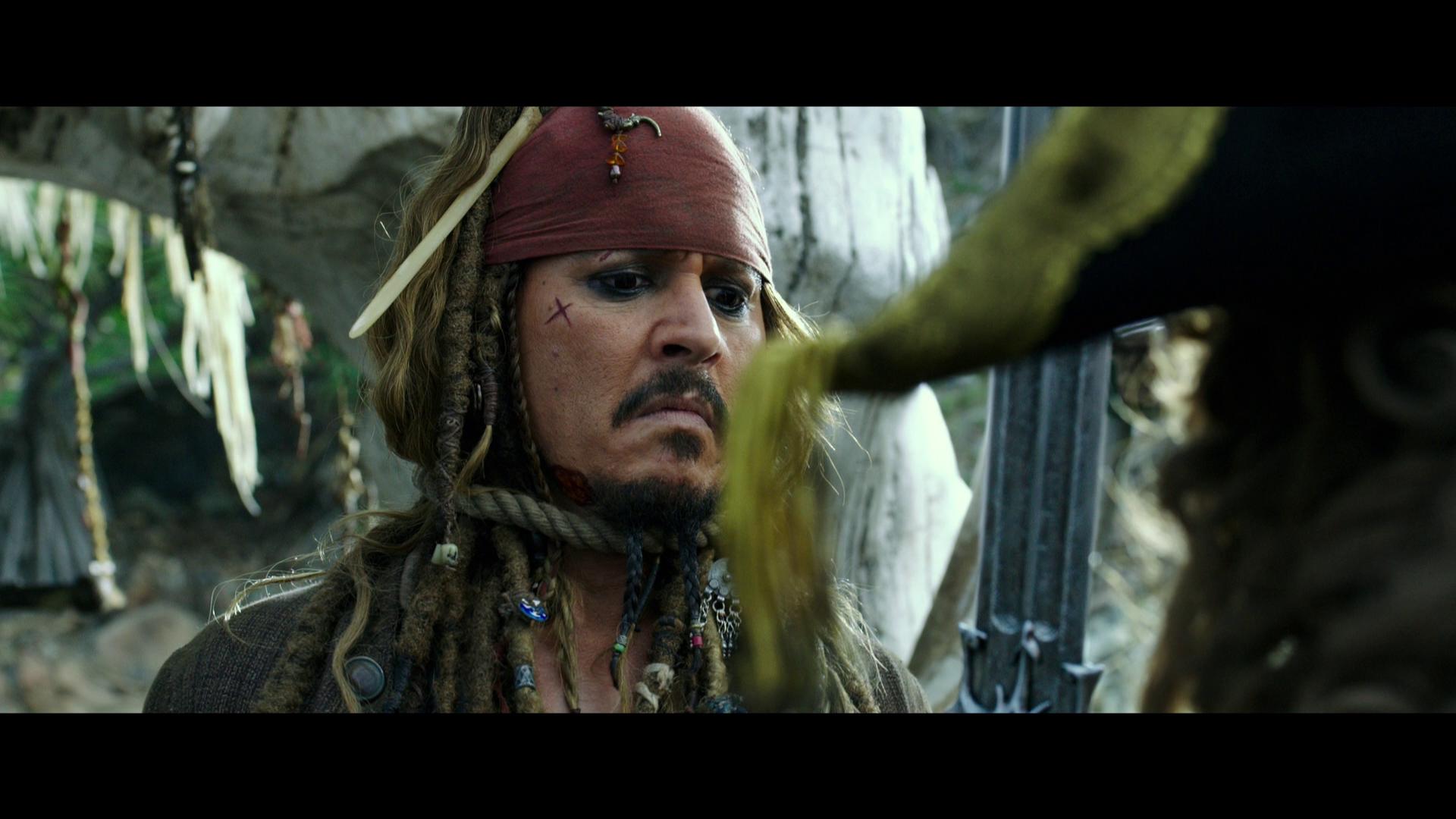 Overall, I wasn’t too pleased with Pirates of the Caribbean: Dead Men Tell No Tales.  This movie had a significant amount of hype that surrounded it, along with previously enjoying the earlier films of the franchise, this one was rather disappointing.  Mostly because of the complicated storyline.  That said, the performances from the cast and crew were amazing, as expected, and I can’t revel enough about Johnny Depp’s performances as Captain Jack Sparrow.  The overall visual and audible presentation of this release was decently done, with the audio definitely outperforming the visuals.  It did look nice in 4K with HDR, but there were some serious issues with the darker scenes.  There’s a decent amount of additional features that have been made available that will allow you to explore the film further.  If you’re on the fence about picking this film up, I would only recommend it if you have the earlier films of the series.  And even then, I would personally recommend grabbing the Blu-ray release because the visual performance of this release definitely needed some work. 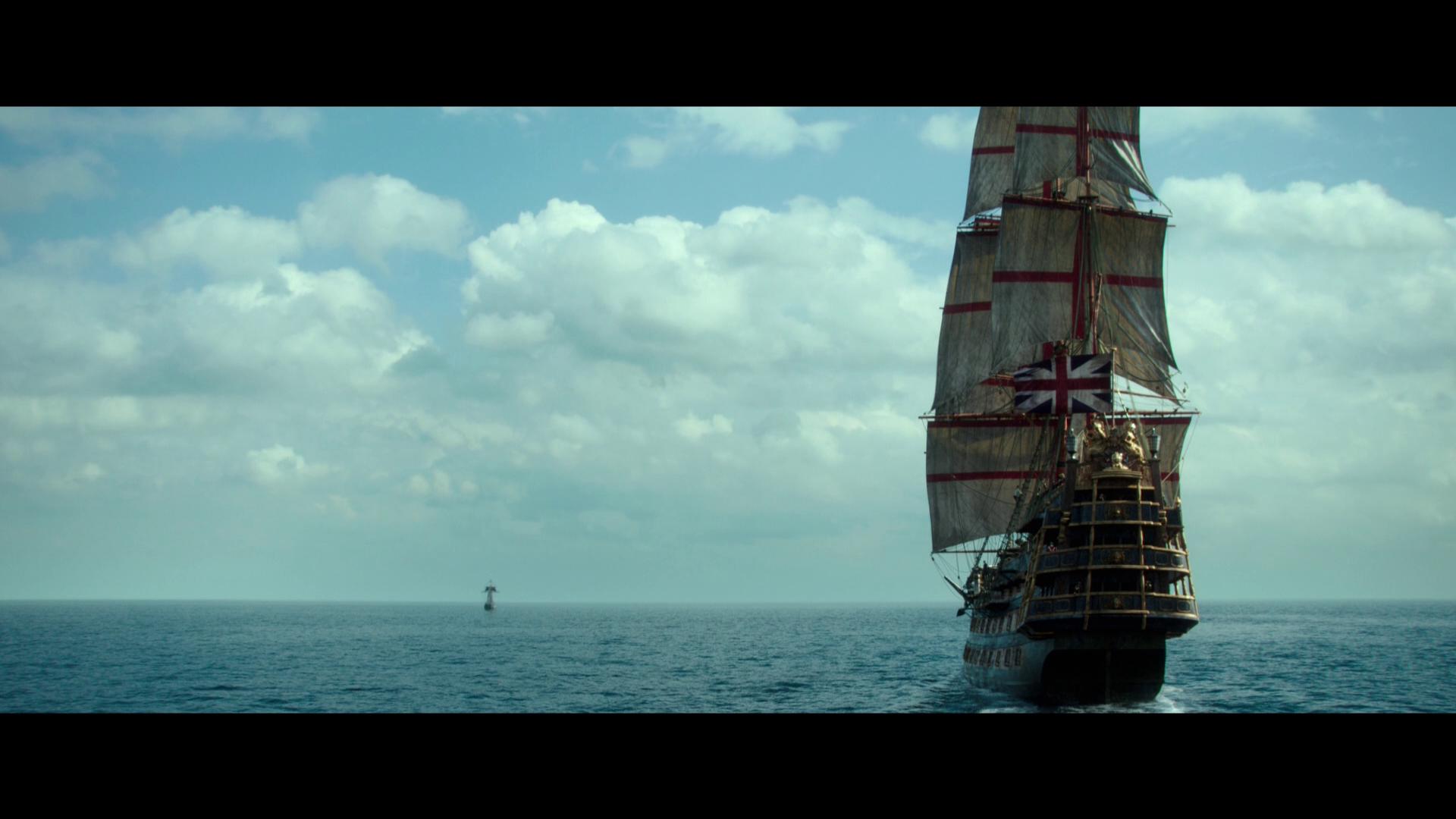