It’s hard to believe that it’s only been 70 years or so since the Nazis surrendered to Allied forces in Europe during World War 2. Western society feels like it has, in some ways, come so far from those horrid years, in which Hitler and his regime marched across Europe, decimating pre-existing society and committing genocide against the Jewish people who lived on the continent, that it’s easy to forget the work that was done by people far greater and determined than I to make it that way. Luckily, every now and then a talented and dedicated filmmaker and his crew will step up to the plate, in order to immortalize their work through the power of cinema. The People Vs. Fritz Bauer is one of those productions. 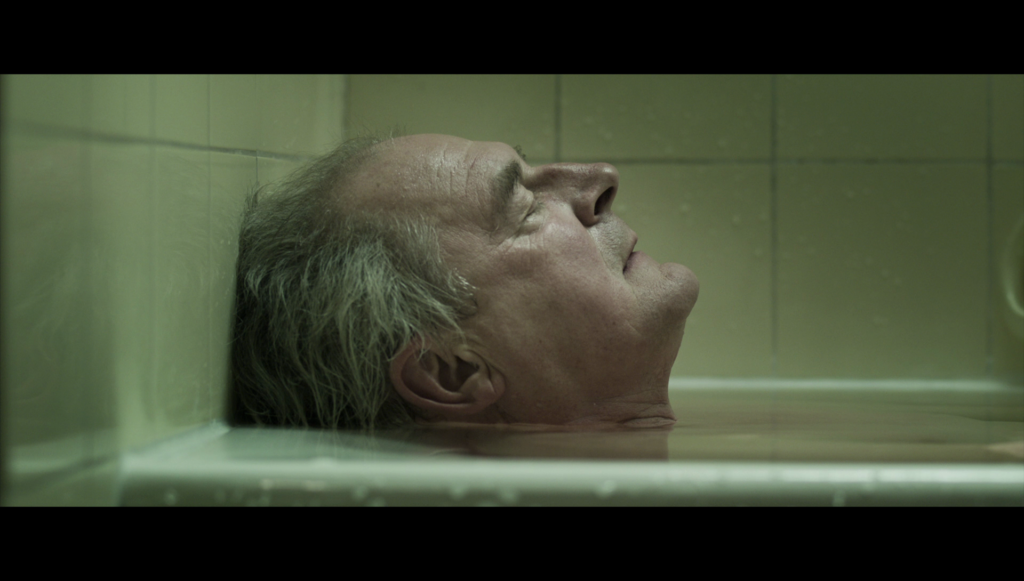 The People Vs. Fritz Bauer follows the work of then District Attorney in Hessen, Fritz Bauer, during the late 1950s to pursuit and acquire justice for the SS members who had fled from Germany during the end of World War 2 in order escape persecution for their war crimes, specifically Adolf Eichmann, who orchestrated the movement of millions of Jews across Europe into death camps. It details his investigative work, as he pushes back against those who wish to cover up and repress the dark deeds that Germans committed during the war, as well as the restraints that he and his partner, State Attorney Karl Angermann faced from all sides as they sacrificed everything to see that Eichmann was captured. Together, they must push back against a regime that refuses to shed its last traces of Nazism, one that continues to condemn and intimidate those who don’t serve their interests, such as the Jewish community, and the Homosexual community. 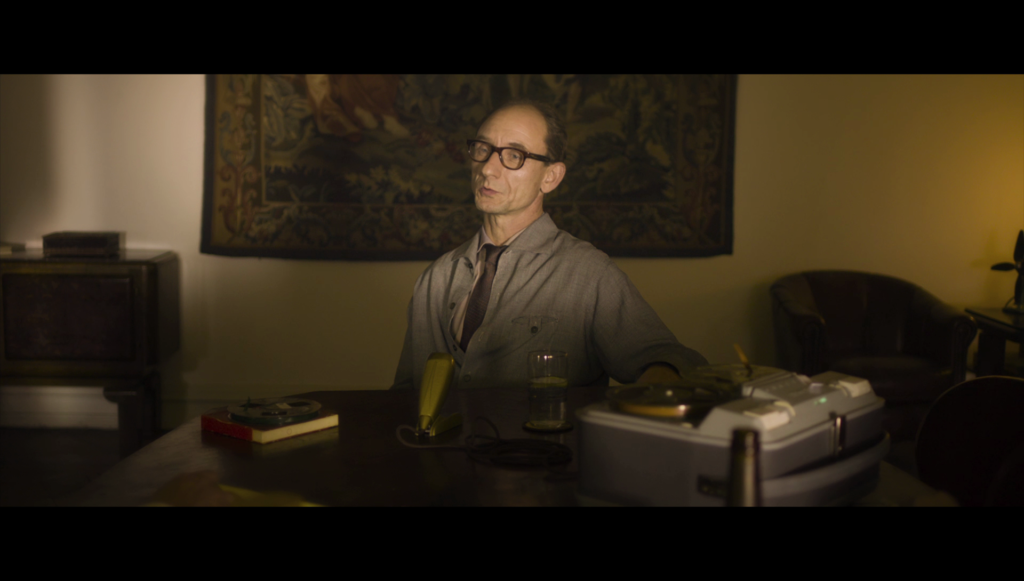 This film is structured into essentially an A and a B plot, with the A grappling with the massive task of uniting multiple parties together under the most dire of circumstances to acquire Adolf Eichmann, and a B plot which really only hints at the persecution faced by the homosexual community under the new democratic government in West Germany at the time. I want to bring this up early, so that I can address the drastic shift in quality between these two plots, which I feel is the film’s main weakness. 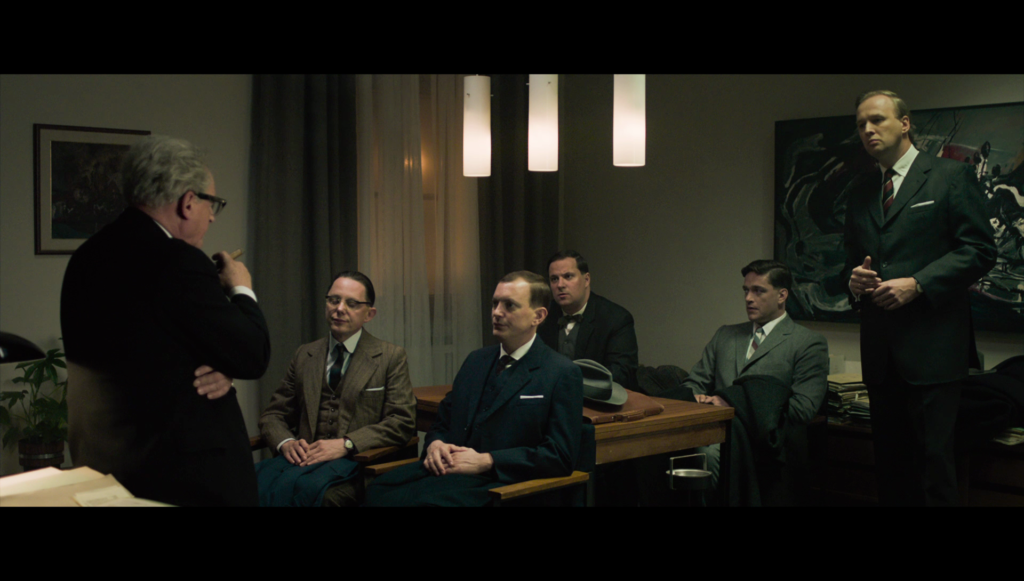 The film’s main plot deals with the hunt for a dangerous war criminal, whose capture would be used by Fritz and his team to force West Germany to come to terms with its horrific past under Hitler’s control. It’s tightly scripted, engaging, and has this incredible weight to it that makes it feel incredibly important. It’s B plot, which is arguably just as important for a large group of people who were, at the time, heavily repressed by a backwards government, is shoved into 10 minutes of screen time It feels incredibly contrived and compressed to illustrate the issue of the absurdly oppressive laws set against the homosexual community in Germany, only to toss it aside in order to serve Fritz’s quest to hunt down and persecute the former SS members that were still large. It’s bizarre to me that a film that tackles a story of such historical significance would trivialize the plight of an entire people, and ultimately I would have preferred that it’s climax could have been produced in a different, more effective way. 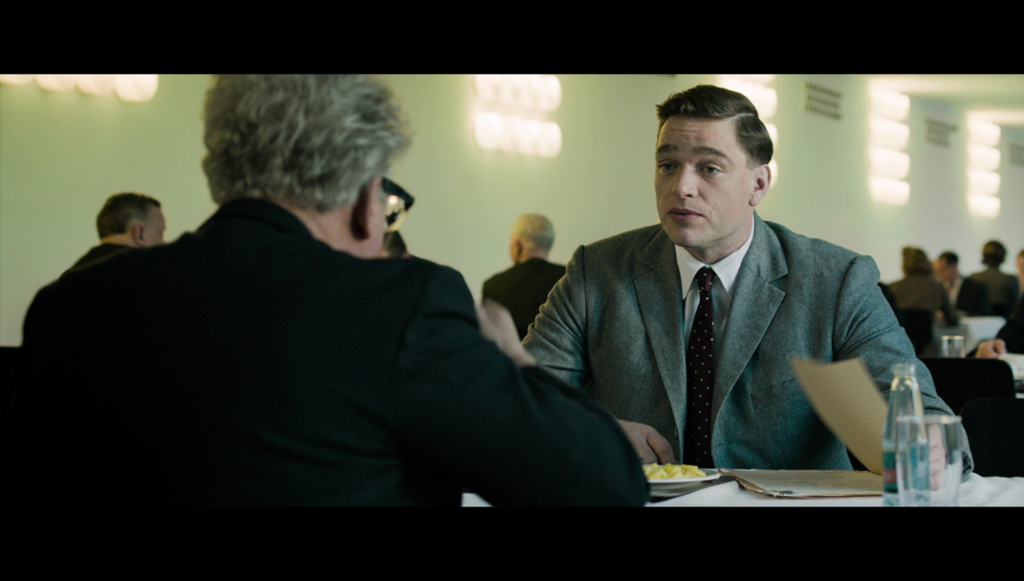 Beyond that, if one is to only focus on the main plot, you’ll see a wealth of brilliance before you, as Fritz Bauer, played by German actor Burghart Klaußner is forced in desperation to turn away from the legal system in order to pursuit his version of justice. As a Jewish man placed into a position of authority, he is subjected to intimidation and push back from all sides as his own law enforcement peers attempt to do everything they can to keep Eichmann out of a German court. This part of the movie is expertly paced, well scripted, and rather exciting. It depicts Bauer and Angermann, played by Ronald Zehrfeld as heroes, willing to lay down their careers and even become criminals themselves in order to force Germany to face itself, a most noble of causes.  The film keeps you on the edge of your seat as they play by their own rules to ensure that Eichmann is taken in, with the weight of the movie rested entirely on strong performances from both of these lead actors. 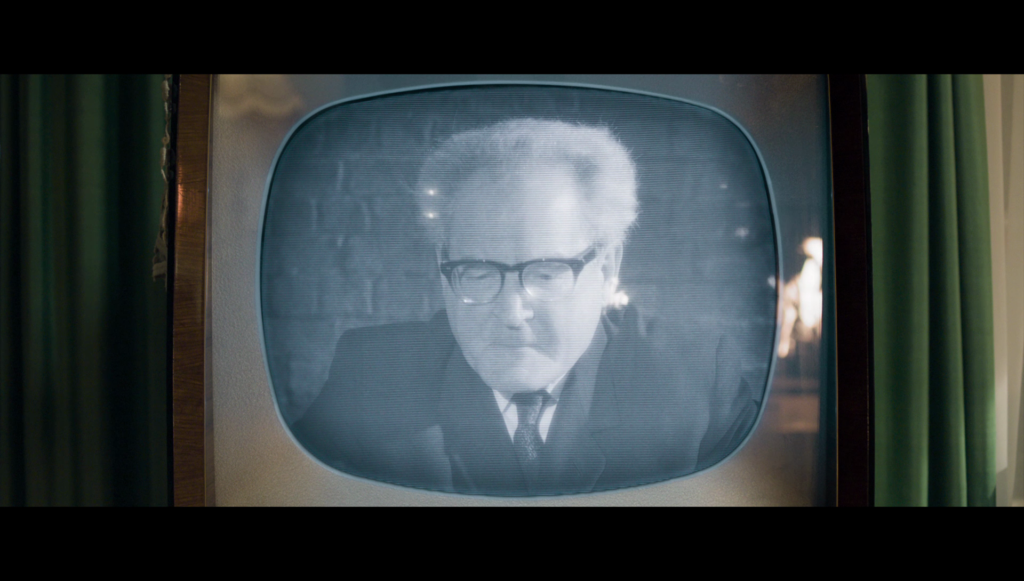 When the credits rolled, I was fairly impressed with just how entertaining, interesting, and effective director Lars Kraume was able to make the story of one District Attorney’s almost vengeful quest for justice against those who had committed unspeakable acts. The tightness of that story line just makes it even harder to accept the film as a whole, as it’s B plot just gets wasted and trivialized, tainting the production’s otherwise rock solid construction. That being said, I still feel The People Vs. Fritz Bauer is worth your time, as the historical significance of the events it depicts are without question.

The People Vs. Fritz Bauer was mostly likely produced via a digital shoot, but there is little in the way of information regarding which camera system was used for capture, or what resolution it was mastered in. The film is presented in 1080p, in the 2.35:1 aspect ratio. For the record, subtitles for the film typically hang at the bottom of the frame. 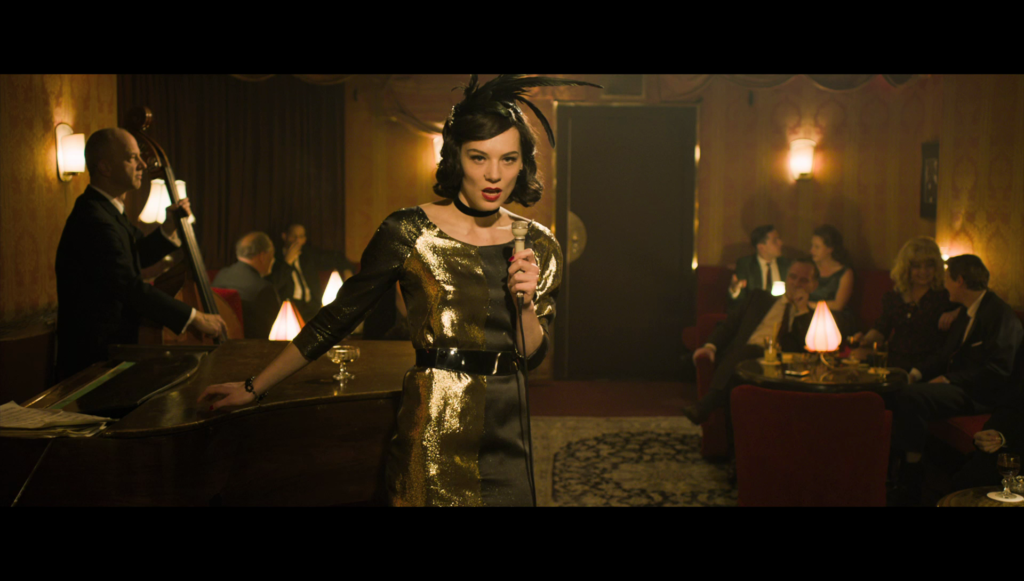 As is typical with digital shoots, The People Vs. Fritz Bauer looks very sharp, very clean, and very cold in terms of its color scheme. The film has a rather subdued style to it, one in which color is muted in favor of a more realistic depiction of the world, one in which the world is fairly overcast almost all of the time. Color aside, the digital image features excellent black levels, especially during the darker nighttime exposures, and excellent detail, especially in close ups. Watching this on my OLED LG 4K television, I found the image to upscale incredibly well, something that I cannot say about many Blu-rays in my collection. Overall, I was very impressed.

The People Vs. Fritz Bauer is presented on home video using a 5.1 DTS-Master Audio soundtrack in the original German language. English subtitles are provided. 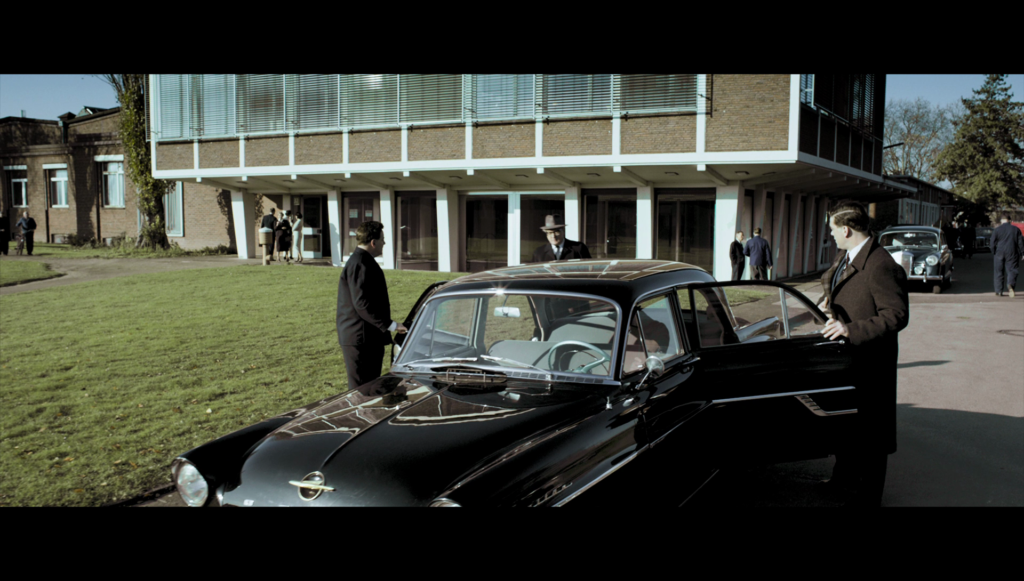 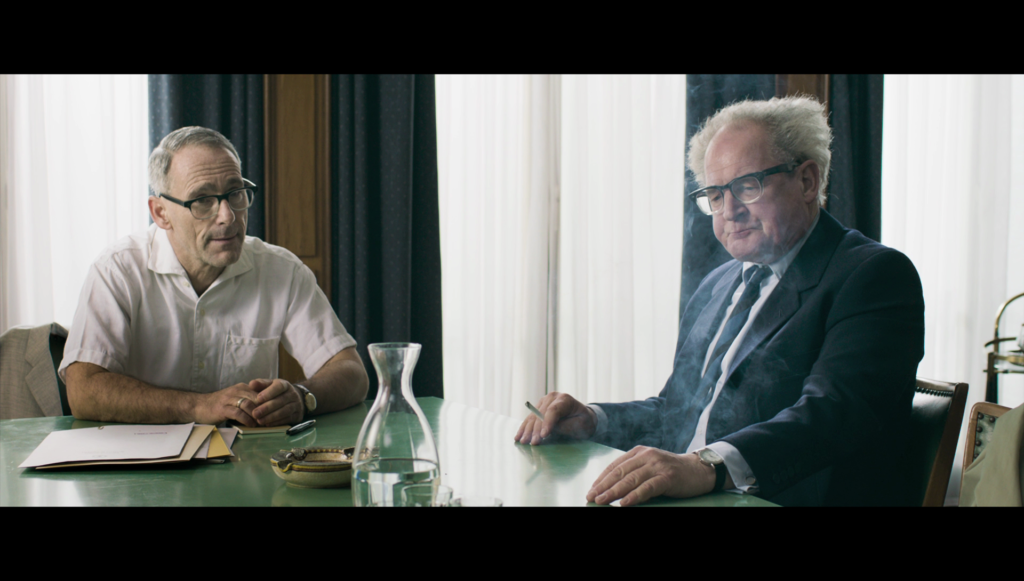 In terms of sound design, the film is mostly driven by conversations in small rooms by a small number of people. There is often very little deviation from that, other than the occasional car trip, or rain storm sequence. Surround activity is minimal at best, and other than the occasional sound effect that pans to the stereo channels or some of the film’s score, this is a soundtrack guided almost exclusively by your center channel.

The People Vs. Fritz Bauer has been released to home video by Cohen Media Group as part of it’s Contemporary Classics collection in a standard Blu-ray keepcase. The front features the release poster designed for the film’s theatrical release by Cohen, which has Fritz feature at the bottom of the frame smoking a cigar, with a number of the film’s supporting characters appearing out of the smoke from his cigar, laid against a Nazi symbol next to the film’s title. The back features a paragraph about the film, 3 character headshots, a list of features, technical information, and credits for the release. These are both surrounded by the typical red and black Cohen Media Group borders. Inside the case, there is a lovely shot from the film printed on the reverse of the case artwork, and a full color booklet featuring a cast list, chapters, and several photos from the film. As usual, Cohen does an amazing job packaging their releases, this one is no different.

Onto the features, of which there are three:

Making of The People Vs. Fritz Bauer – a 13 minute making of featurette in which the cast and crew discusses Fritz Bauer as a man, and how they went about depicting him on screen with all of the supporting characters surrounding him. 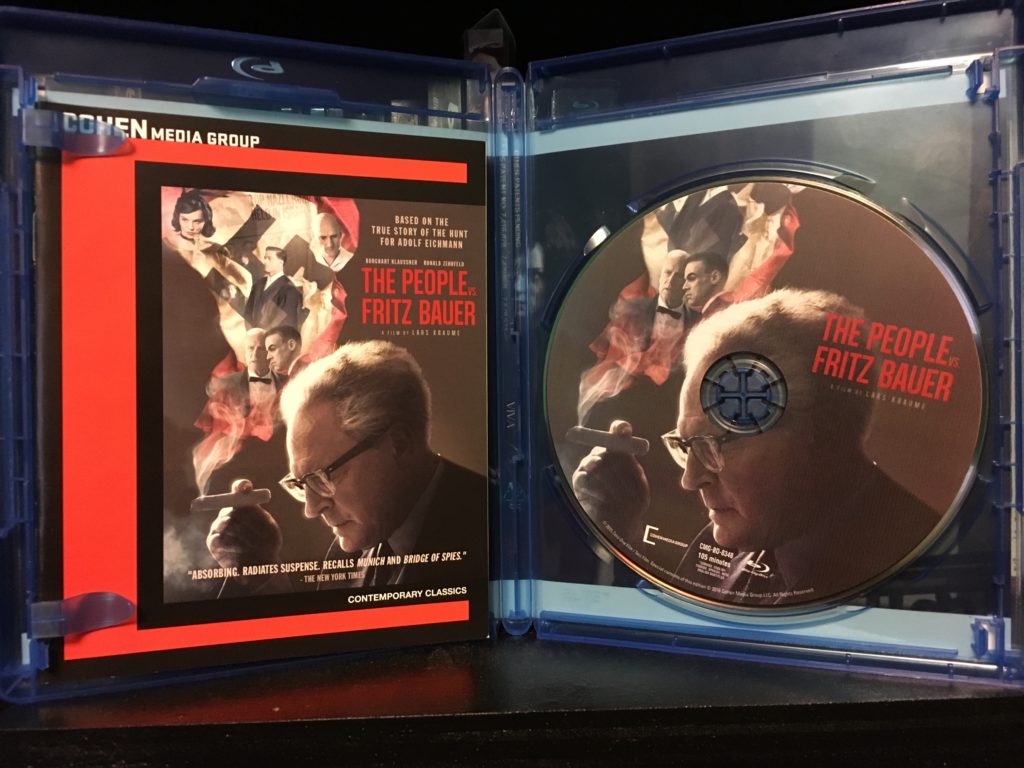 Deleted Scenes – 5 scenes excised from the film, mostly character development scenes for Bauer as a character, to help establish why he left Germany in the 30s, and how paranoid he’s become since death threats against him have increased.

Theatrical Trailer – the film’s theatrical release trailer, as prepared by Cohen for their domestic release. 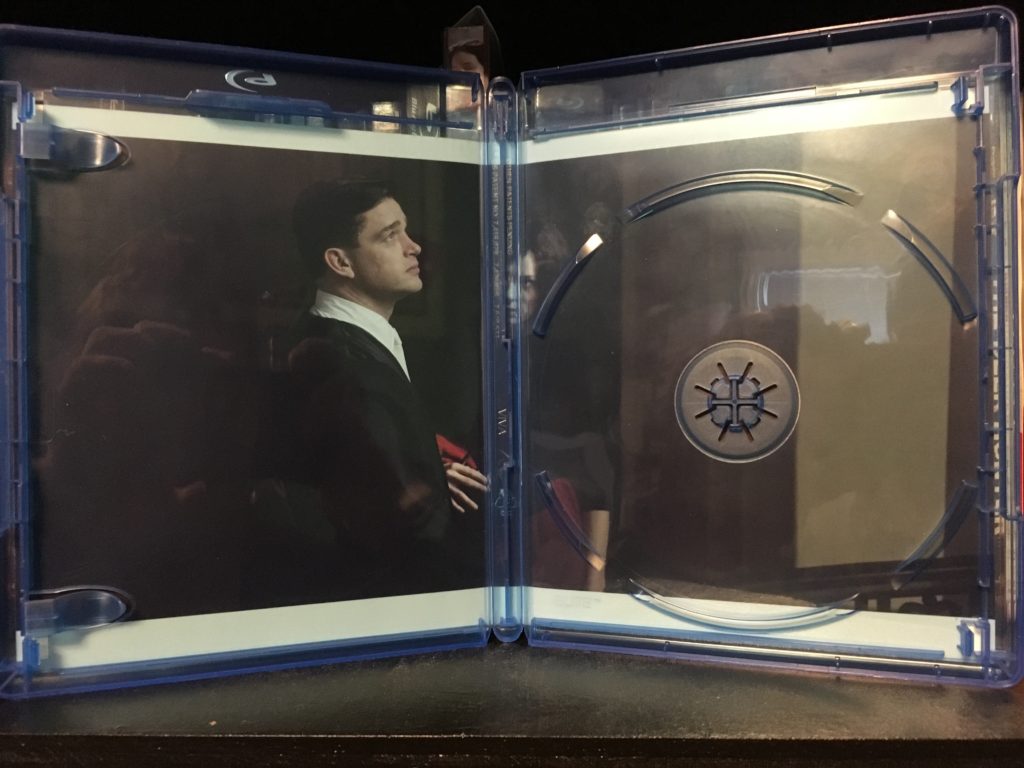 Cohen always kills it in the packaging department, but the extras for this release are fairly less than satisfying unfortunately. I could have used a commentary, or some interviews, but such is life.

I want to tell you to drop everything and settle in for a gripping, intense tale about one man’s drive to make Germany face it’s dark past through the eventual prosecution of SS leader Adolf Eichmann. To that however, I’d have to sidestep a really contrived and shoehorned implementation of a homosexual persecution story that forces me to do a double take. If you can look past this however, The People Vs. Fritz Bauer is a well crafted film, one that mostly does justice to bring the spotlight to the incredible achievements accomplished by Fritz Bauer as District Attorney. Cohen Media Group brings the film to home video with a picture-perfect video transfer, adequate audio, and phenomenal packaging. Could I have asked for a few more extras? Sure. Overall, I was satisfied with this release.