Paterno is a 2018 American television drama film that was directed by Barry Levinson. It stars Al Pacino as the former Penn State football coach Joe Paterno, and his career leading up to his dismissal following the university’s child sex abuse scandal in 2011. Riley Keough, Kathy Baker, Greg Grunberg, and Annie Parisse also star. The film premiered on HBO on April 7, 2018.

The film follows Joe Paterno as he’s entering into an MRI machine in November 2011 and he begins to recall events in his live. On October 29, 2011, Paterno wins his 409th game as the head coach of the Penn State Nittany Lions football team. During 61 years at Penn State University, he helped the former “cow college” quintuple its financial endowment and build the Paterno Library. At the age of 84, Paterno is so beloved as “a coach, an educator, and a humanitarian” that a statue is outside Beaver Stadium, and so powerful that he demanded that university president Graham Spanier and athletic director Tim Curley fire him in 2005 when they asked him to resign. Inside the stadium, Spanier, Curley, and vice president Gary Schultz worry about a grand jury investigating accusations of child sex abuse against Jerry Sandusky, a retired assistant coach.

Paterno was met with a generally positive response from critics. On the review aggregator website Rotten Tomatoes, the film holds an overall approval rating of 74% based on the 34 reviews that have been submitted, with an average rating of 7.1/10. The critical consensus reads that “Paterno, elevated by deft direction from Barry Levinson and a strong Al Pacino performance, presents a hard-hitting dramatization of a gut-wrenching real-life story.” The film has since drew heavy criticism from 300 of Paterno’s former players, who have signed a letterman in protest fo the film’s portrayal of the coach. It has also been acknowledged that the film’s portrayal of Paterno’s role in a possible cover-up in the Sandusky scandal has not been proven. 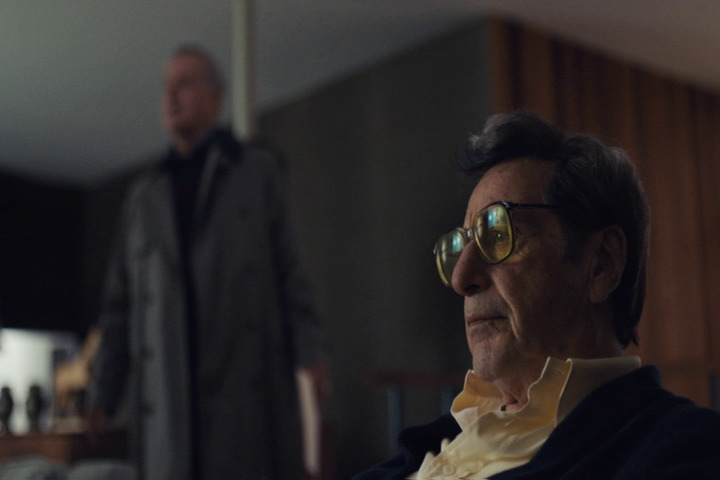 All beliefs aside regarding JoePa’s involvement in the Sandusky sex trial, you can’t say that the man didn’t do a lot for the college that he worked for.  Paterno covers not only his importance to the university as a whole (regardless of his position of being the football coach), but offers a perspective to the story and possibly his involvement on the whole thing.  While we don’t really know all of the details of his involvement or his knowledge, it provides a very reasonable and very well executed take on the whole situation.  The performance of Pacino and those around him in this movie were very well handled, and offered a take on the entire situation that I had personally not really considered when this story was making its rounds on the news. 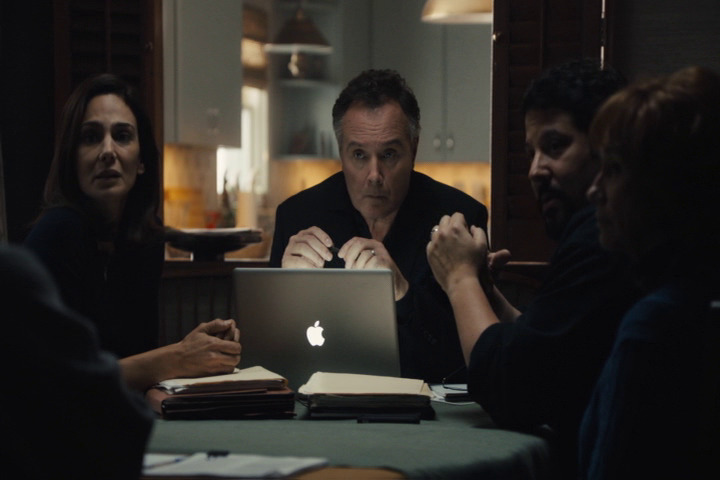 Being made only available on DVD, Patereno does everything that it can to offer a clean look into the story and the life of Joe Paterno.  While it’s not nearly as good as it could have been had they opted to release this movie on Blu-ray, the experience that was provided was semi-clean, and gives its viewers an experience that, for the most part, lets them visually see and understand everything as it’s happening.  There really wasn’t much attention to detail in the release, and I’m under the impression that the original television broadcast of the movie looked better than that of this release.  But, I digress, as my wife and I watched along, we were able to follow along without issues or really any calling for extreme attention to details. 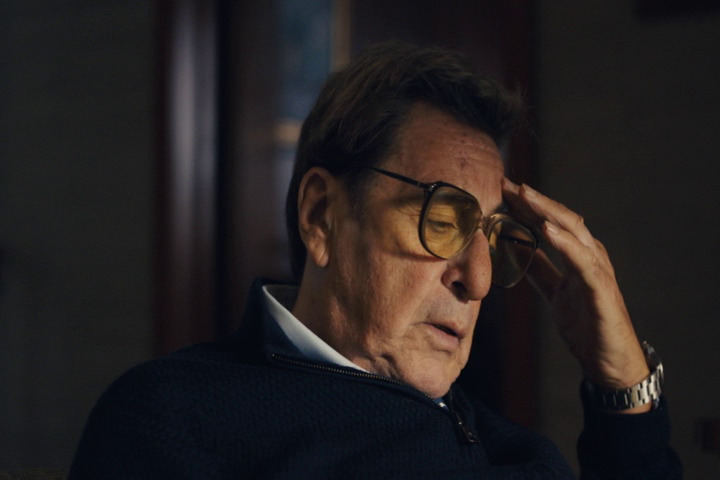 Packaged with an English Dolby Digital 5.1 mix, Paterno takes every ounce of possibility within the DVD format to give its viewers an immersive and in-depth look into the mind of the man who was flooded with emotions as his Assistant Coach, and possibly best friend became the center of attention once the news broke out.  Overall, the audible experience, despite being presented with a lossy track, was clean, clear and allowed for everything to be heard.  There really wasn’t a need for any kind of surround features or the use of additional channels; and despite its lossy encoding, sounded okay as it played through my home theater system.  I will admit, the power that accompanied the football fans, whether it was in the stadium or the crowds as they changed along, those scenes sounded the absolute best with this release.  Dialogue is spoken cleanly, and everybody was able to be heard and understood without the need to adjust the volume controls as it played onward. 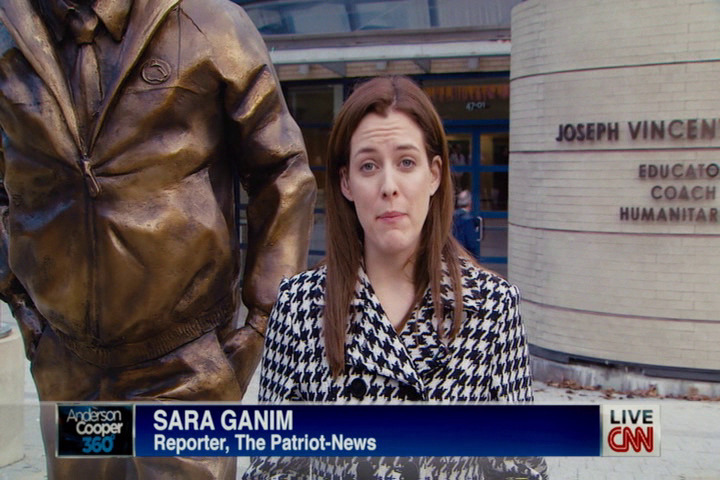 The DVD copy of Paterno comes packaged in your standard single-disc DVD amaray case.  Within that case is the standard DVD copy of the movie, the disc featuring no artwork that’s related to the movie outside of the standard release text.  There is a digital copy redemption pamphlet that’s been included so you can add the movie to your digital library, or sell it off separately if you were inclined to do so.  There are no slipcovers available for this release. 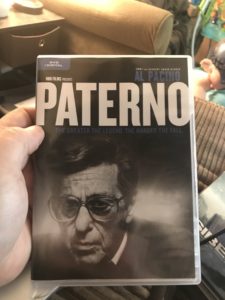 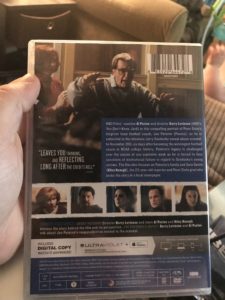 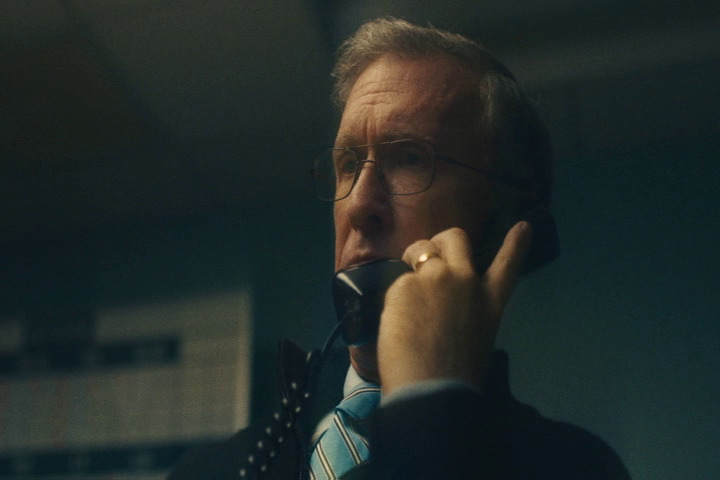 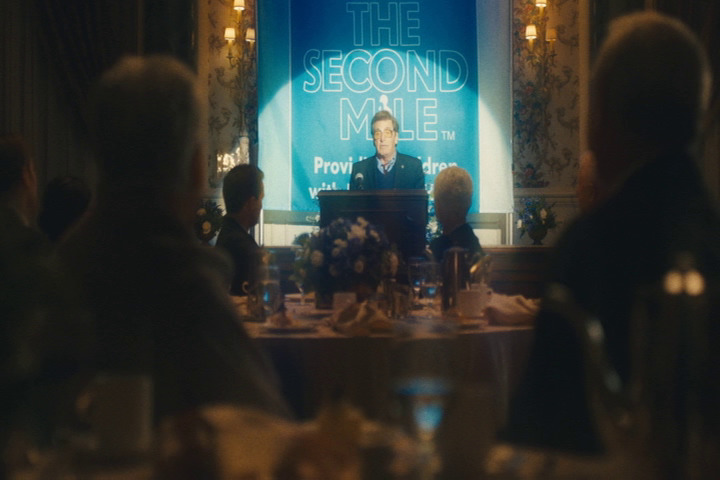 Generally speaking, I didn’t think that Paterno was all that bad of a movie.  I may be very well uneducated on what unfolded between his involvement in the Sandusky case and really any discussion that happened prior to his passing.  But, looking at this movie as an outsider with no ties to Penn State, or really as anybody who only followed the major headlines that accompanied those events, this movie was a very nicely done dramatic presentation.  I do wish that the feature had been made available on Blu-ray, and it really is a shame that they opted to not really do so.  If you’re considering this release for your collection, I’d definitely recommend checking it out.  Paterno is available on DVD.