The year is 2010, I am in tenth grade, and have recently discovered a passionate love for Hiyao Miyazaki’s Princess Mononoke. With a vicious hunger, I hunt down every single film Miyazaki has directed up to that point, and devour them all. Not being totally satisfied, and having more free time than I know what to do with, I decide to make it my quest to watch not just everything directed by Miyazaki, but also everything every produced by his production company, Studio Ghibli. This leads me down various paths, such as the local library, and dark, nefarious corners of the internet, where I move quickly through films such as Whisper of the Heart, and Grave of the Fireflies, until the only film I have left is Isao Takahata’s Only Yesterday. Only Yesterday is a unique case, as at the time Walt Disney Home Video is the exclusive rights holder to all things Ghibli in America. Because of their kid friendly reputation, and the film’s more adult themes and content, Walt Disney chooses to pass on producing a DVD of Only Yesterday, forcing me to create my own TERRIBLE subtitled DVD to watch the film. 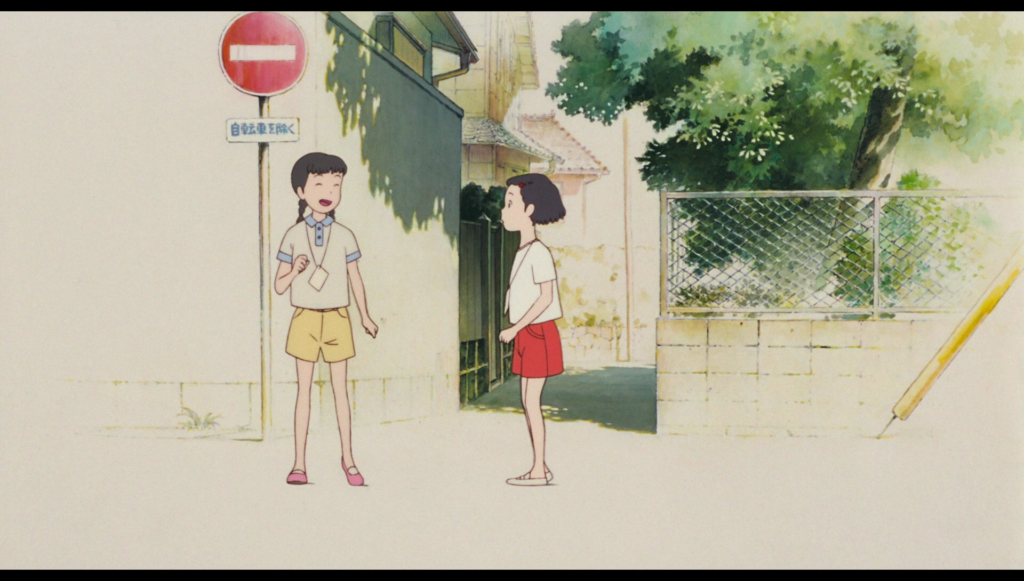 Cut to 2015, and the game has changed. In the wake of low box office returns for their English language productions of Ponyo and The Secret Life of Arietty, Disney decides to pass on non-Miyazaki directed films for theatrical release in the United States. Instead, a newcomer, GKids steps into the ring, producing star-studded English productions of Ghibli productions such as From Up on Poppy Hill, The Tale of Princess Kaguya, and When Marnie Was There – all excellent films, but not the easy box office that would convince Disney to drop everything and produce their own releases. Finding success with limited releases of those three films, GKids announces that they have decided to produce an English production of Only Yesterday, with a voice cast led by none other than Star Wars: The Force Awakens star Daisy Ridley. They announce a limited theatrical release in early 2016, with a Blu-ray release, the first ever home video release of the movie in the United States. In this moment, I have finally found peace.

Only Yesterday, adapted from a manga of the same name, is a film about self-reflection and nostalgia, as it follows a 27 year old woman named Taeko as she takes a trip to the Japanese countryside. Single, and working for a nameless company in Tokyo, she decides to take a trip that’s rooted in her childhood experiences. Throughout the film, we get frequent flashbacks into Taeko’s childhood in the 1960s, as she recalls memories of childhood romance, frustrations with her schooling, and growing up with her siblings, memories which help shape her decisions as an adult on her trip to the countryside, as she meets new people and potentially finds romance. 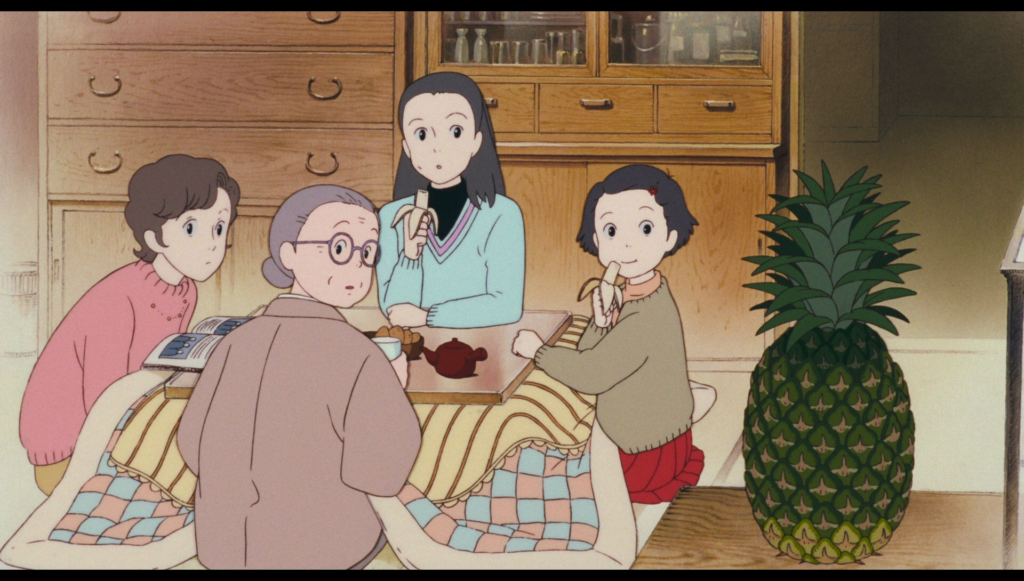 Unlike Miyazaki’s films, which are epic adventures set in fantasy worlds, Takahata usually makes more grounded, human stories. This film is no different. Only Yesterday is probably his most grounded, never resorting to tragedy or anything particularly extreme or exaggerated to tell the story of Taeko. Instead, the film presents a series of family conflicts and school stories, set in contrast against the story of a young woman who lives a life devoid of excitement, one where she feels stuck. The film tells a story in which a twenty-something measures herself against the grandiose ideas she had as a child, and faces the reality that she’s come up rather short. It’s the kind of move that speaks to many post-college adults who can easily identify with what Taeko is going through as she runs off to the countryside to escape. It’s the kind of film that doesn’t typically come out of the animated film industry: a grounded, mature adult drama with realistic characters and outcomes that also appeals to children. Usually it’s the other way around. 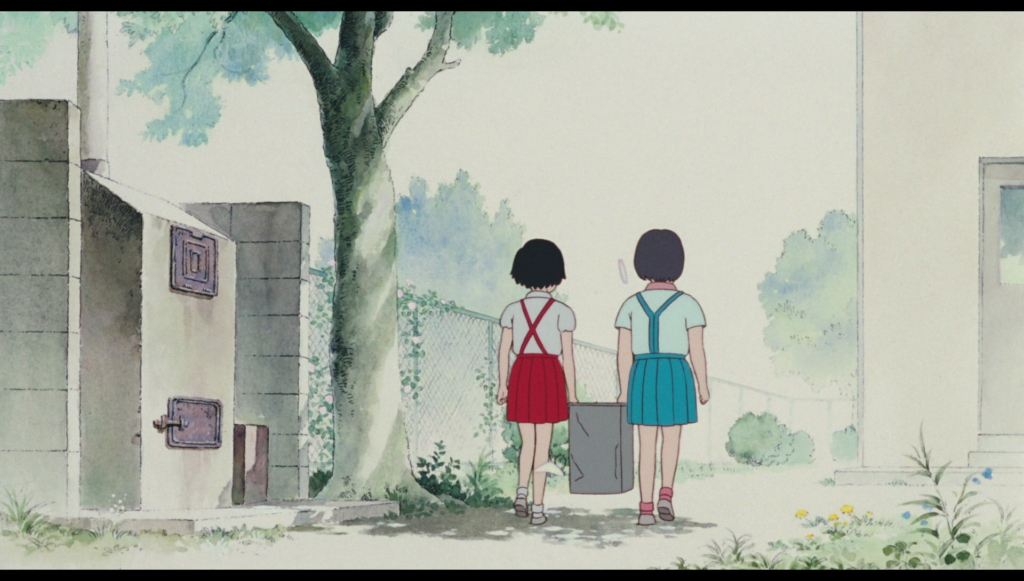 Visually speaking, the film is beautiful; animated by hand in tradition Japanese style, the film has a watercolor-esque color palette, with pale reds and greens, as if to emphasize the nostalgic qualities of the flashback sequences of the film. Facial animations are moderately realistic, unlike most animated faces, due to the fact that spoken dialogue was recorded first, and animators created their facial expressions based on that, which is fantastic. The score, composed by Katz Hoshi, is appropriately matched with the themes of the film, and plays off almost as a character that interacts with the aged world presented in the film. The new English dub is well casted, and scripted, as is par for the course with GKids productions.
Only Yesterday is a slow, meandering film that really takes its time in exploring Taeko’s past, and its ramifications on her current place in life. It reflects upon the trials and tribulations of childhood in a way that we all do from time to time, exploring its impact with depth in a way that most  films tend to gloss over while also being a fulfilling romance feature. Takahata’s films are often overlooked when it comes to the Ghibli films, as focus often tends to center on Miyazaki’s more grandiose offerings, which is a shame, especially with Only Yesterday. It has always been a favorite of mine, and hits home in all the right places.

Only Yesterday, originally released in 1991 to Japanese theaters, was animated by hand, and shot on 4-perf 35mm film, for a theatrical aspect ratio of 1.85:1. This Blu-ray, sourced from a digital restoration of the film most likely produced in 2012 for the original Japanese Blu-ray release of the film, is presented in 1080p resolution, maintaining the 1.85:1 aspect ratio. 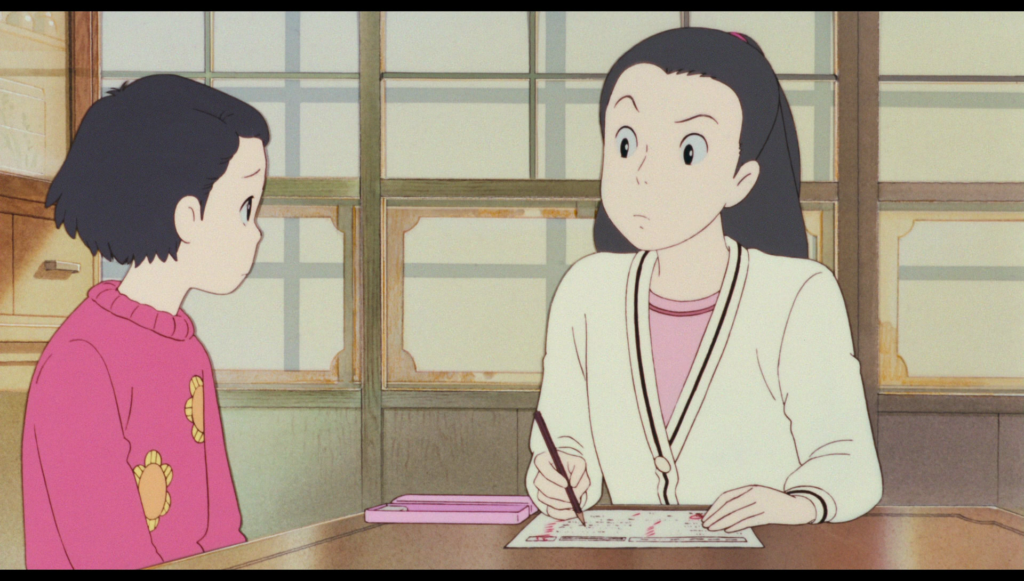 Only Yesterday looks incredible. Traditionally animated films look great on Blu-ray if treated right, and the film has received the star treatment. Colors are beautifully saturated and consistent across the entire run time of the film. Line detail and background art looks sharp and perfectly preserved in the transition to Blu-ray. The transfer maintains a healthy layer of film grain. It shines in 1080p.

Originally presented in stereo on Japanese theatrical prints, and dubbed into English by GKids for their American release of the film, Only Yesterday features two soundtracks: a DTS 2.0 English soundtrack, and a DTS-Master Audio 2.0 Japanese soundtrack. 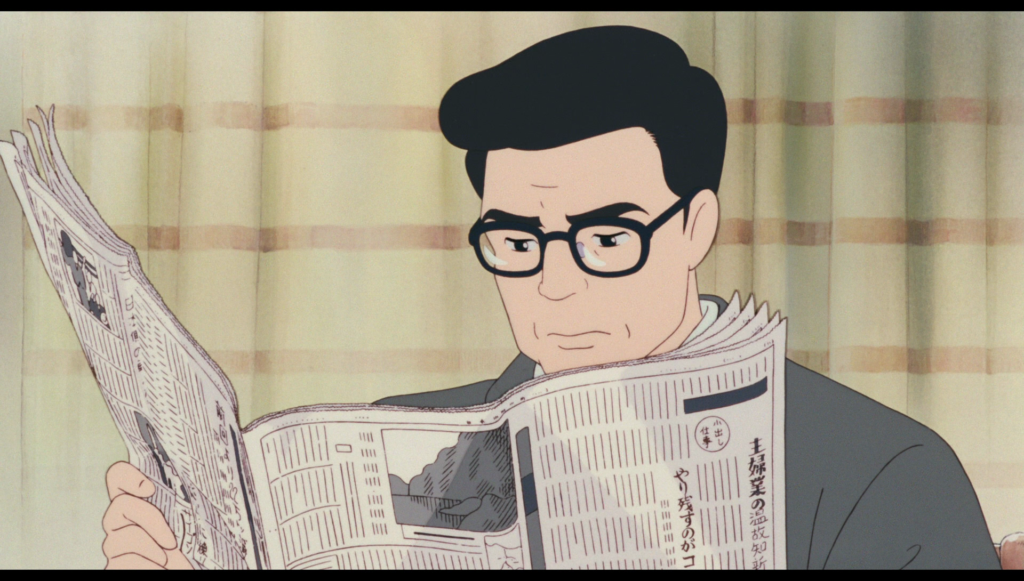 Presented on home video by Universal Pictures Home Entertainment, Only Yesterday comes packaged in a standard blue keepcase, as well as a matted slipcover. The front slipcover and case artwork features the artwork of Taeko as a child and an adult taken from the film’s English poster, while the back artworks feature a couple of shots from the film, a paragraph about the film, a list of bonus features, credits, and technical info. The packaging is colorful and eye catching, an excellent effort from GKids and Universal. 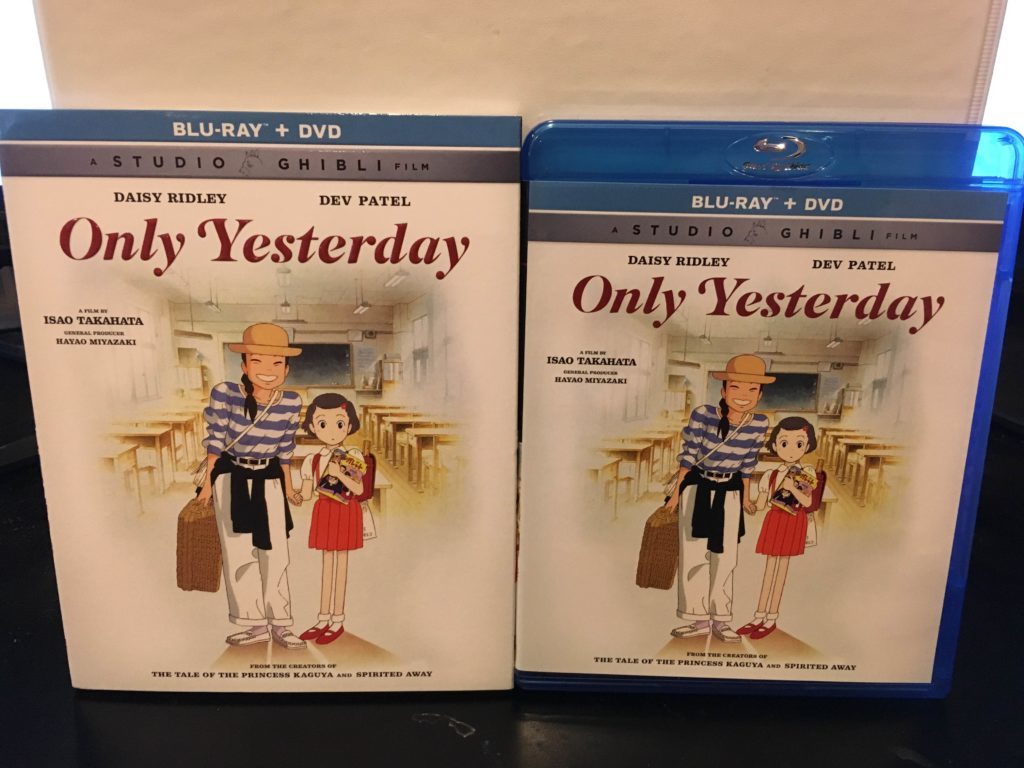 Feature Length Storyboards – the entire feature, presented via the original storyboards used as a basis for the animation of the film.

The Making of Only Yesterday – a Japanese feature about the creation of the film, sourced from a standard definition master. The piece covers the relationship between Takahata and Miyazaki, the inspiration for the film, and the overall production in detail.

Behind the Scenes with the Voice Cast – a feature that introduces the voice cast that participated in creating the English dub for this release. They discuss what it’s like to work on such a beloved film, what it means to them, and a bit about their experience. 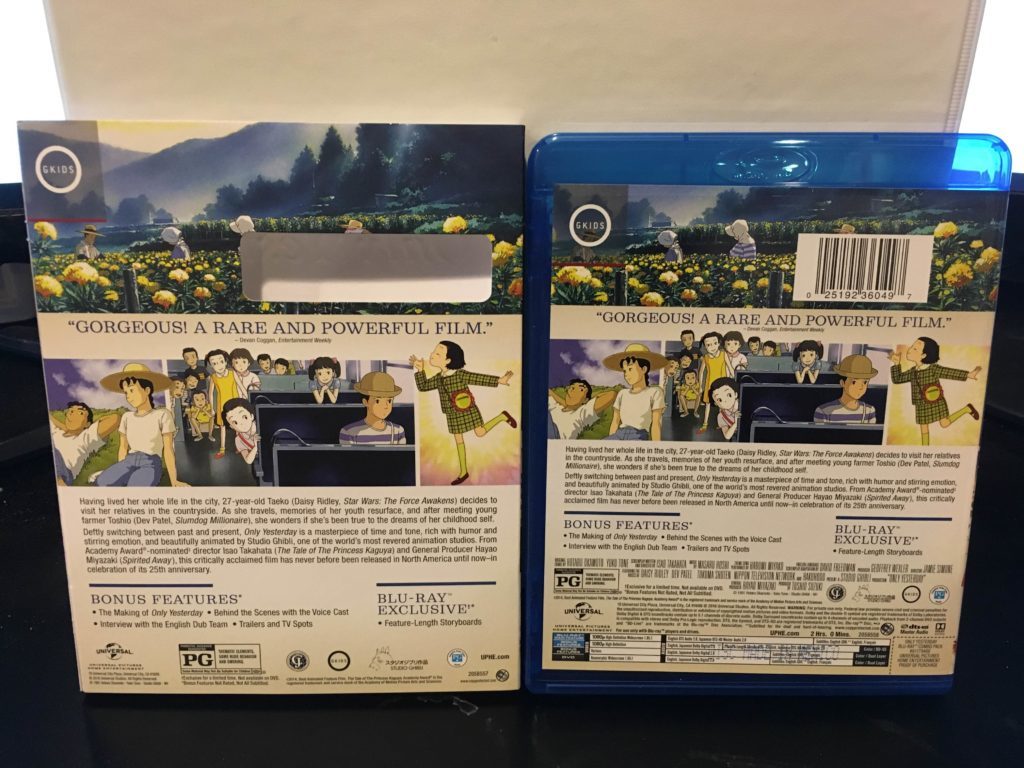 Interview with the English Dub Team – a panel style interview, taken from a screening of the film, in which the people responsible for creating the dub talk about its long history, and how it felt to work on such a movie in front of a live audience.

Foreign Trailers and TV Spots – 4 separate TV spots and trailers from the Japanese release of the film.

US Trailer – the film’s US theatrical trailer, produced by GKids for its 2016 release. 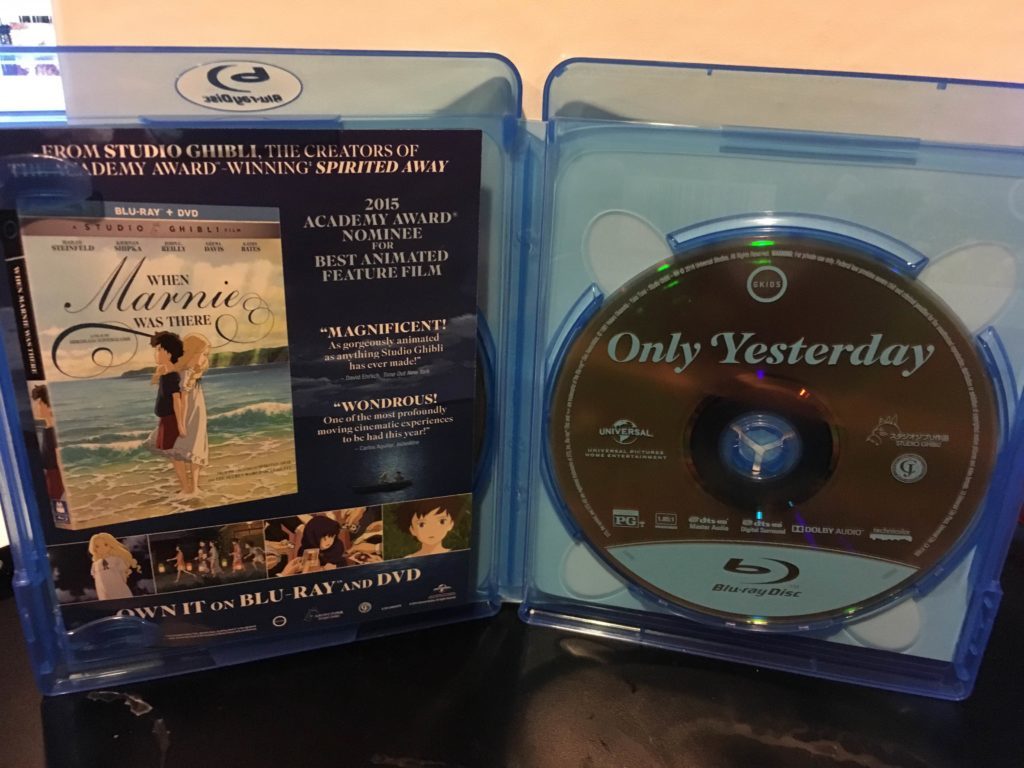 With the inclusion of the full feature’s storyboards, as well as a variety of English dub interviews and a full length feature on the film’s production from Japan, Only Yesterday comes with a nice collection of features to complement the excellent packaging. 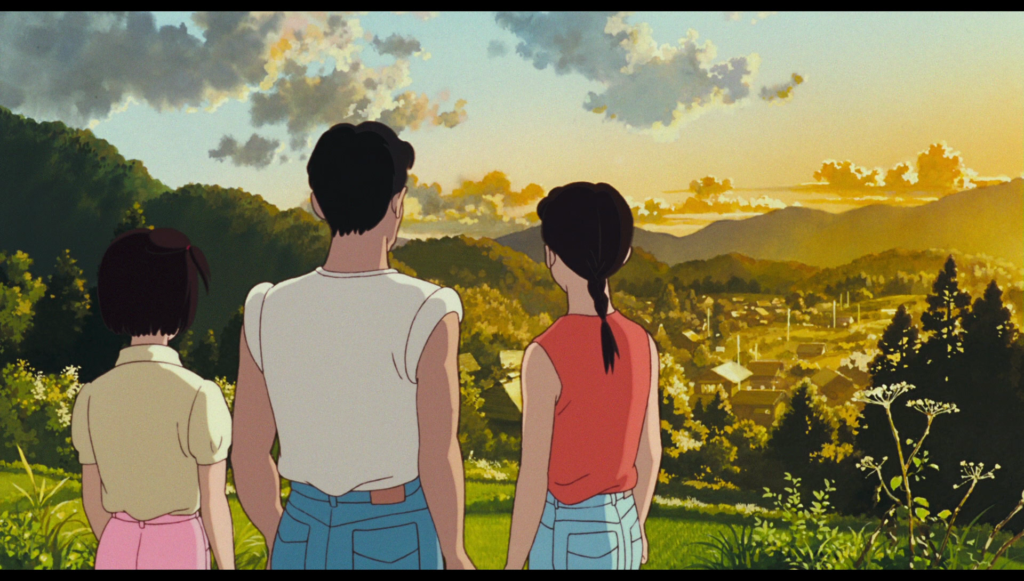 Only Yesterday is phenomenal film. In its initial release, it went on to become the highest grossing film of the year in Japan, where it resonated with adults and children alike. The story is engaging, the way it’s told is fascinating enchanting – its use of flashbacks to explain character motivations is wonderful, and the story it tells is satisfying, yet grounded in reality. The film’s Blu-ray features an excellent video transfer, an excellent Japanese soundtrack and a puzzling English soundtrack, as well as a nice set of features and excellent packaging. Only Yesterday has finally received the treatment it has always deserved on home video here in the United States. I am, for now, at peace.