On Dangerous Ground, the newest classic film noir to be released from the RKO Vault by Warner Archive is one of those movies that’s light on its feet, but fills you with all of the comfort of a great bowl of tomato soup – intense, warm, exciting, but not exactly the most filling meal you’ve ever had. Something that might be better with a nice half of a grilled cheese sandwich, just to give it a little more umph. You know what I mean? 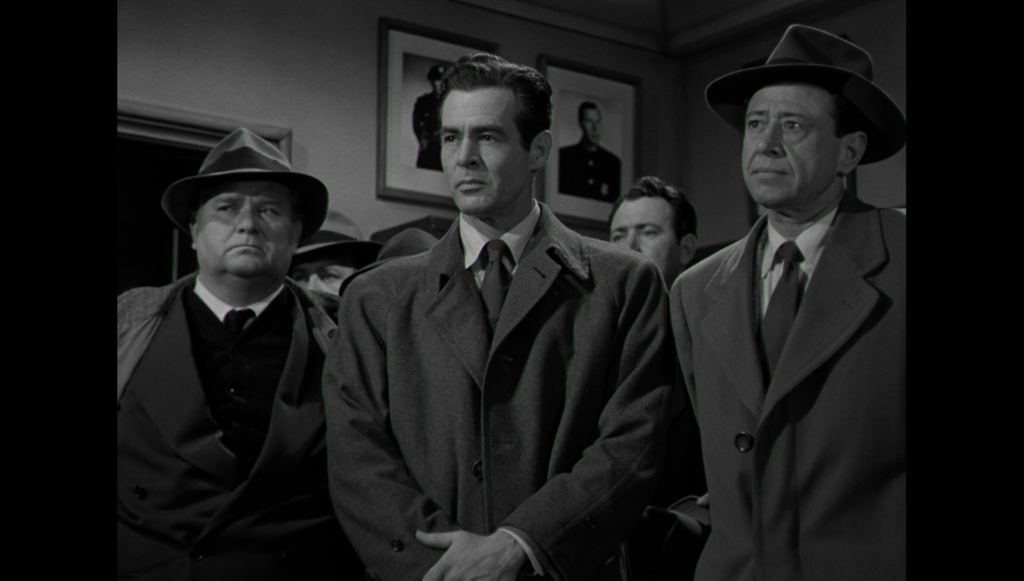 Falling into the extreme psychologies period of film noir, On Dangerous Ground tells us the story of Jim Wilson, a disillusioned urban cop who’s begun thirsting for violence as he’s grown tired and frustrated dealing with the lowlifes in the city. After snapping one too many times, and crossing paths with one too many lawyers, he’s assigned to a small town case as far away from the city as possible. There, he finds himself part of the manhunt for the killer of a young woman. After crossing paths with the victim’s father, they lanuch an aggressive chase, landing them in the home of a young, beautiful blind woman, who begins to melt Wilson’s icy exterior. Together, they trade secrets, and learn to trust one another in the search for the killer on the loose.

Directed by acclaimed director Nicholas Ray, and released by RKO in 1951, On Dangerous Ground hits all the right notes for a film noir – a cop on the edge of disaster, a dangerous crime to investigate, and the beautiful woman who pulls everything together. In this case however, she happens to be blind, and instead of fulfilling the traditional role of the femme fatale in noir, Mary, played by Ida Lupino, is vulnerable and warm, which allows her to disarm our brute of a lead, played with a heaping of cynicism and anger by actor Robert Ryan. Their chemistry, while woefully underexplored, is realistic and somewhat sudden, built up almost immediately over a single moment where guards are let down for only an instant. 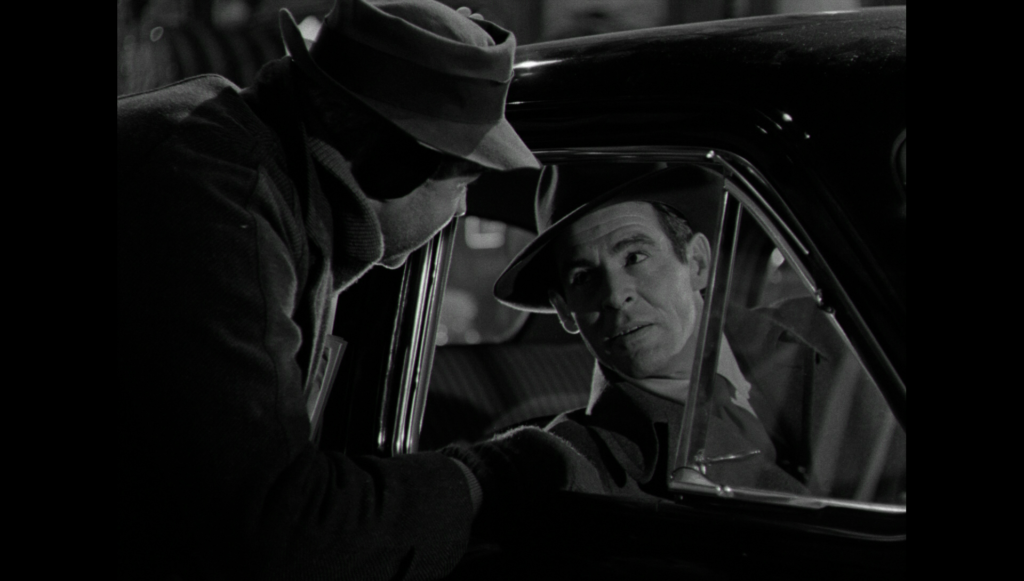 That’s really the only issue with the movie; it moves fast, and at 82 minutes in length, it fires along like a space age rocket. The entire investigation that he’s sent away to carry out just plows forward like a bullet train, leaving no time for real plot or character development. It’s like the film’s editor was given a runtime, and dedicated the entire thing to making the plot comprehensible, but also cramming as much action as possible into the film to make it more exciting. At times, it feels much more like your regular action movie, with intense car chases, violent outbreaks, and dramatic pursuit sequences, to the point where calling it a noir may seem a little generous. These action sequences are exciting, and well shot, and wouldn’t look out of place in a modern action film. Substitute Ryan for say, Bruce Willis, and you suddenly have a mid-2000s cop movie. 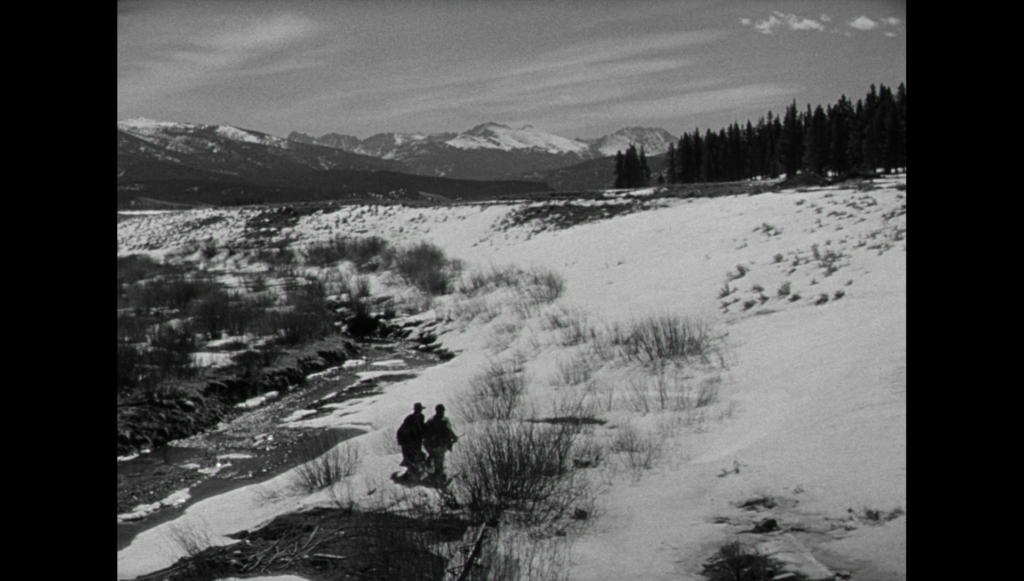 When the script falls short however, a brilliant early Bernard Herrman score swoops in to save the day. Whatever trouble the dialogue has at conveying effective emotion is resolved by his brilliant, if at times somewhat melodramatic score. Blarring horns, soft strings, and a variety of other instruments help us really dig into these characters, and without it the film would be a much different beast. The film’s cinematography, shot by noir veteran George E. Diskant, is full of beautiful high contrast lighting, and excellent wide shots that really help convey the scale of the environments that our hero has to traverse in order to get to the bottom of things. 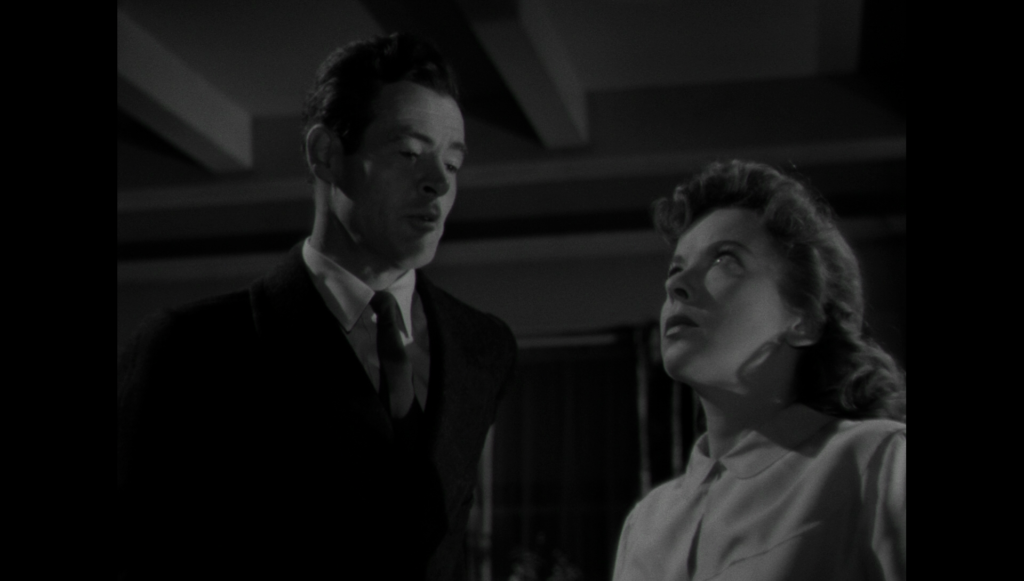 On Dangerous Ground is a blast, hitting most of the right notes. It moves fast enough, and has enough action to keep you engaged even where the film’s script leaves so much out. It’s the kind of movie that’s the hardest to come to terms with, because you’re left wanting more. These characters, the settings, the story are all interesting enough that I just wish it stuck around a little more to dive below the surface.

On Dangerous Ground was shot on 4-perf 35mm film in the full frame 1.33:1 aspect ratio. The film’s original black and white negative was scanned and restored in 4K resolution. That 4K master was used to create Warner’s new Blu-ray, which presents the film in 1080p, in the original theatrical aspect ratio. 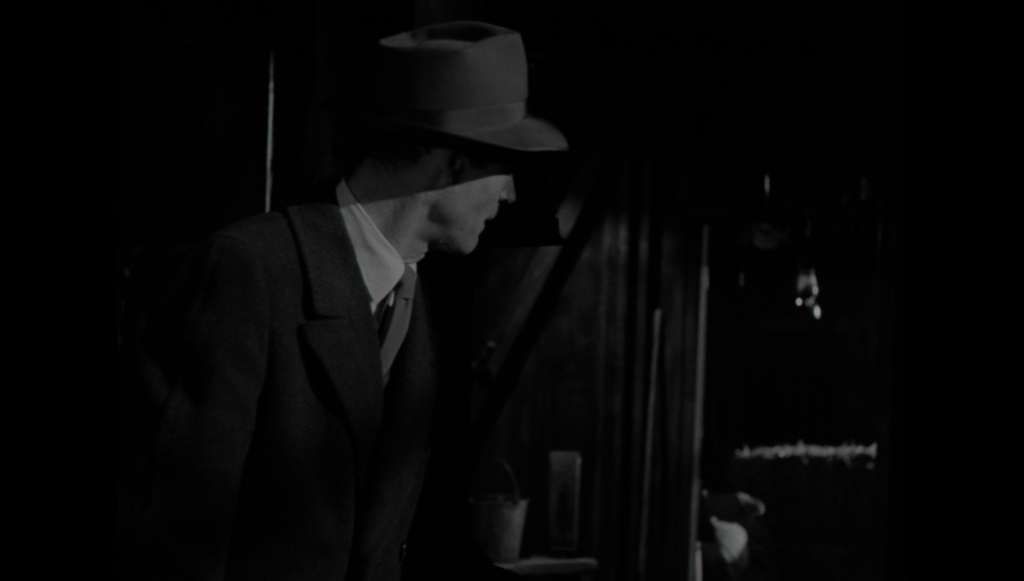 I don’t like to throw around phrases like perfect a lot, but Warner’s new 4K restoration of On Dangerous Ground is about as close to perfection as this film will ever look. Blacks are rich and inky, and contrast is outstanding, especially during the darker urban sequences that populate the film’s first half or so. The transfer features excellent detail and sharpness across the entire runtime of the film, making the beautiful wide shots of the winter exteriors shine. The transfer is covered in a sharp, even layer of film grain that looks beautiful. On Dangerous Ground isn’t exactly the most prestigious offering from the RKO film library, but the folks at Warner Archive sure have given it the star treatment.

On Dangerous Ground was originally presented in theaters via an optical mono soundtrack. The folks at Warner Archive have recreated that experience using a DTS-Master Audio 2.0 mono track. 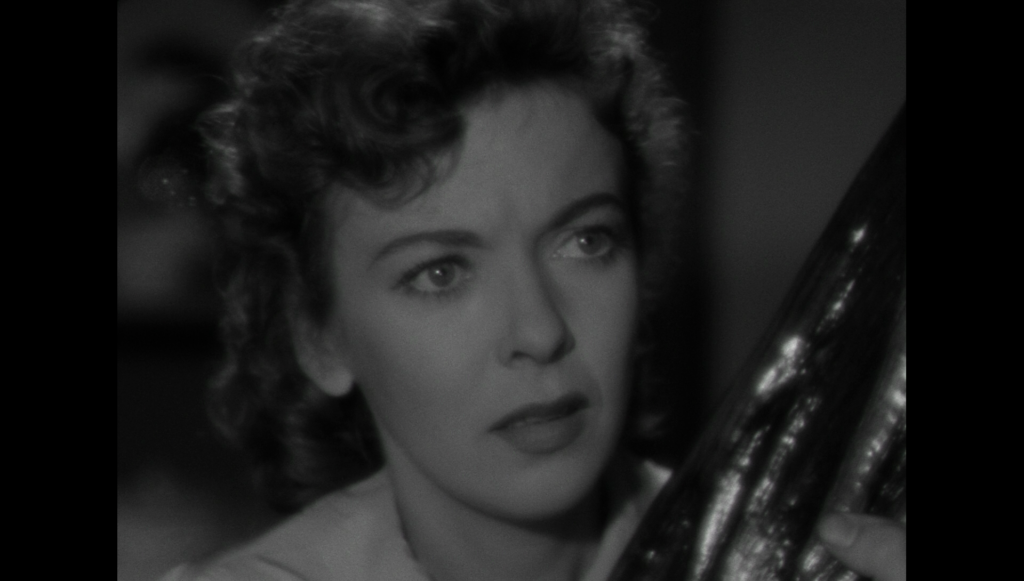 On Dangerous Ground, for a 1950s production, sounds pretty good. Dialogue is clear, and sound effects never fall into obscurity under the score or any other miscellaneous sounds. The phenomenal Bernard Herrman score registers comfortably, although sometimes it swells a little too intensely for my ears. It never creeps into distortion territory, but it becomes overpowering at times, especially during the film’s more action packed sequences.

On Dangerous Ground, released to Blu-ray by Warner Archive, is packaged in a standard blue keepcase. The front artwork features a slight rearrangement of the movie’ theatrical poster, better formatted to fit the case’s dimensions, featuring our two leads front and center. The back artwork features a shot pulled from the film, next to a quote from a film review, a few paragraphs about the film, a list of features, credits and technical info. The decision to feature the text in primarily white and red, set in contrast to the black of the border and the shot match the aesthetics of the film noir vibe perfectly. The packaging isn’t extravagant, but it looks great. 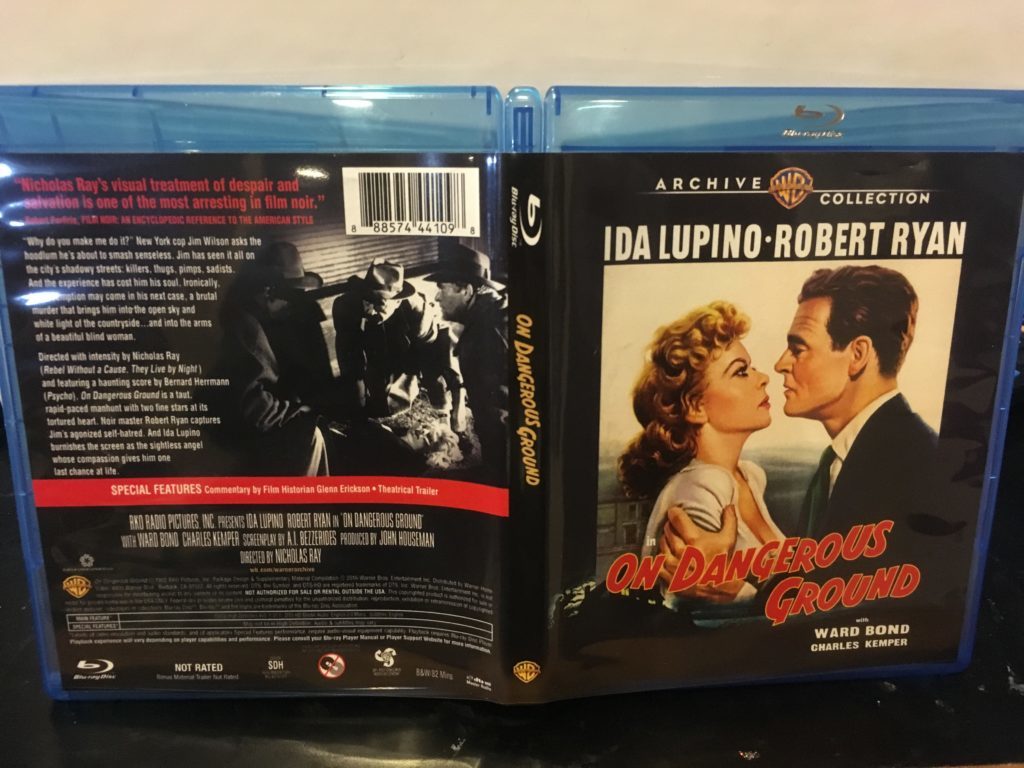 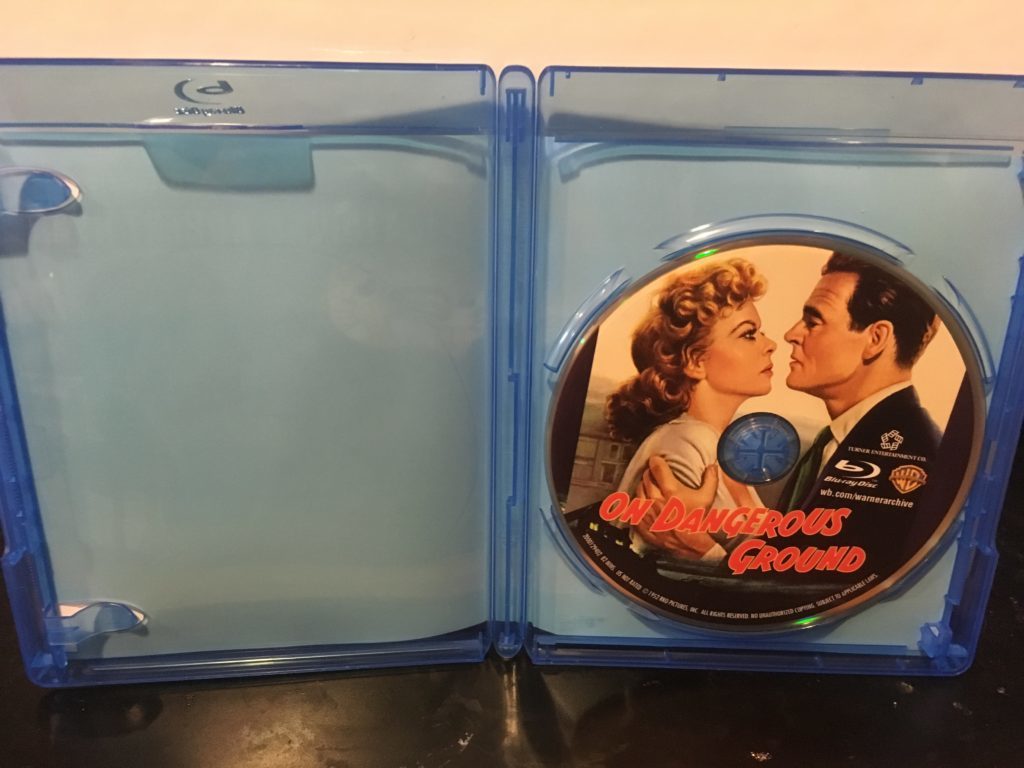 As always, Warner Archive rolls in with hardly any extras, but at least this time around, the packaging is really good looking. 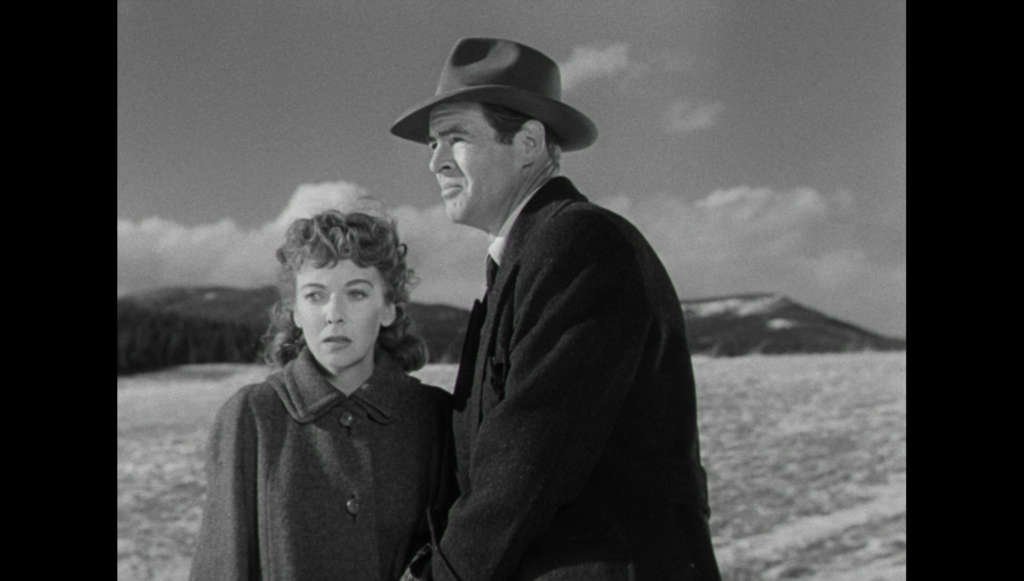 I had a blast digging into On Dangerous Ground, because even though its lightly scripted, it hits all of the right notes to make it an engaging watch. If I had to make another analogy, it’s a lot like a roller-coaster; fast, fun and exciting without a ton of depth, but if someone asked me to go for another round, I’d hop on without any real hesitation. To sweeten the deal, Warner Archive has presented the film with an excellent 4K mastered video presentation, good audio, and some fantastic looking packaging. This one comes with a hearty recommendation, especially for fans of decent film noir and action.