Now You See Me is a film that started out with a fair amount of hype and excitement, presenting the story of a group of four magicians that are able to pull off some of the most amazing illusions that nobody’s ever seen or done before.  This is a movie that shows us some really amazing visual effects, and starts out really strong with its story line, then abruptly took a turn for the worse as the film’s ending lurched forward.  Maybe I’m missing the point the ending tried to convey; but what they end up doing with their loot after completing heists of that magnitude just doesn’t make a bit of sense to me.

Featuring a pretty stellar cast, including Jesse Eisenberg (The Social Network, Zombieland, and Adventureland), Mark Ruffalo (The Avengers, Shutter Island, and Spotlight), Woody Harrelson (No Country For Old Men, Zombieland, and Cheers), Isla Fisher (Home And Away, Rango, and Wedding Crashers), Dave Franco (21 Jump Street, Superbad, and Warm Bodies), Morgan Freeman (The Shawshank Redemption, Seven, and Driving Miss Daisy) and Michael Caine (The Dark Knight, The Prestige, and Inception); one would expect a pretty stellar experience.  However, by the end of the film, I wasn’t satisfied.

As I said in my introduction, the film itself didn’t really leave me in awe.  The story features a group of four magicians who are absolutely amazing at their art.  They are brought together after being summoned to a random address, and a year later they are now big time illusionists featured in sold out shows in Las Vegas, now known as The Four Horsemen.  They gain even more notoriety with their first large-scale illusion which involves a pretty impactful bank robbery.  The first half of this film started out really strong.  Much like any other crime drama; it had a decent amount of “What??” factor to keep my interest.  However, it does lack character development and the plot was not exceptionally strong, with many plot holes throughout.

Now You See Me does feature some rather impressive illusion presentation from The Four Horsemen.  While it is all camera tricks and CGI at play here; they were fun to watch.  Also included here are some fast-paced action scenes with a car chase, as well as some tenser scenes as Mark Ruffalo’s character tries to solve some of the mysteries that are presented before him.

I decided to give this film a 3 out of 5 mostly because it was a decent popcorn flick. Now You See Me is movie where you can sit down without any kind of expectation and have a little fun, and if for any reason you were to get distracted, you won’t be too upset.

Now You See Me, presented in the stunning 2160p with HDR, absolutely looked amazing.  The overall picture was extremely crisp, clear and very well presented.  As The Four Horsemen performed their shows and carelessly executed their illusions, you could see everything as if you were sitting there in the audience.  One area that definitely stood out the most to me was during the first show in Vegas. With Vegas being the City of Lights, the general shine of the lights and presentation of the stage was absolutely gorgeous.  I would recommend the UHD only if you have a HDR compatible television, because the inclusion of HDR really makes this film visually pop.

Featuring the Dolby Atmos Technology, Now You See Me was over-the-top with its use of the technology.  Everything from your standard dialogue, to the sound effects used and the inclusion of musical score, was beyond words.  In fact, in the scene that includes the car chase, I was able to hear things that I didn’t normally hear when watching the standard Blu-ray.  The overall effect and presentation was much more immersive and I really appreciated the audible experience I was given.

The UHD features your typical release contents.  Nothing special about the packaging for this release except for the included slipcover. 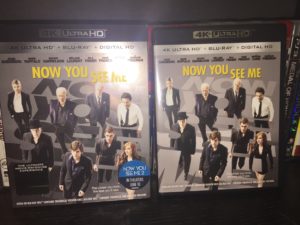 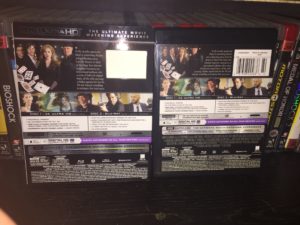 Like I previously stated, the movie itself wasn’t good, but it wasn’t all that bad either, which is typical for a summer blockbuster action movie like this one.  It had the occasional action item that grabbed my attention, however I was left wanting much more than what I was offered.  The overall audio/visual presentation was stellar, making great use of HDR and Dolby Atmos Technology, I was really pleased with the at home viewing experience.  Hopefully Now You See Me 2, which is due out in theaters on June 10, will present a better story.  With a new director in Jon M. Chu, there is a chance that he can do a better job than Louis Leterrier; but I’m not holding too much hope considering Jon M. Chu’s filmography.