I really had no idea what to expect as I put in Night Moves.  It’s a 1975 film, and honestly when I think of “Night Moves” my brain usually points to the illustrious Bob Seger song of teen angst and making out (seriously watch the music video Matt LeBlanc is in it).  What I know going in, is that Gene Hackman is the star, he plays a gritty detective, and the director (Arthur Penn) previously worked with him on Bonnie and Clyde (1967).  What I also know is that the film did not receive commercial success as it would seem no one I know has seen the film.  The film would also help, somehow, launch the career of a rather young Melanie Griffith and James Woods. That’s it, beyond that I haven’t the slightest idea of what to expect. 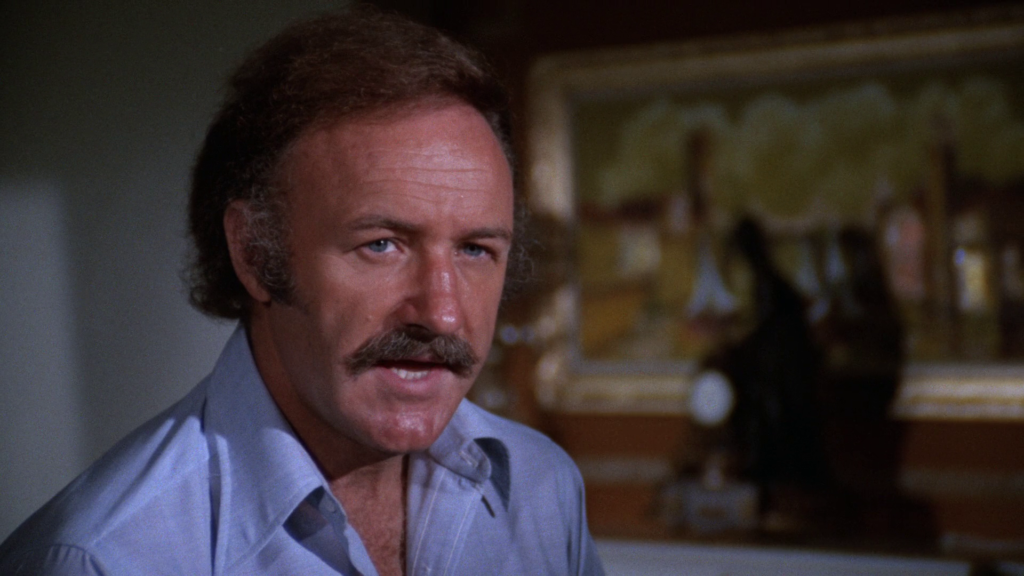 Our story follows Private Eye Harry Moseby.  Harry has been having trouble finding his place in the world.  His wife seems to hate what he does and most days he doesn’t really enjoy it either.  Everything changes when retired actress Arlene Iverson (Janet Ward) approaches him with the case of her missing daughter Delilah (Melanie Griffith).  As the case unfolds he finds that there is a lot more to it than a simple missing person’s case.  The question quickly becomes can he find and save the girl before she ends up in the wrong hands?

Probably the most unusual and disturbing part of the plot is the idea that Melanie Griffith’s character is supposed to be sixteen.  This would not be an issue but almost the entirety of her role she is used as a sexual object that moves the story along.  I am sure this was a lot more acceptable and normalized in 1975 however now it comes off rather weird.  The pinnacle line being “How do you resist,” to which Harry (Hackman) responds, “I just think good clean thoughts like Thanksgiving, and George Washington’s teeth.” playing the entire thing off as a joke and even weirder alluding to the fact that it would basically be acceptable for him to give into temptation.  Beyond that, this movie, more than anything, reminds me, oddly enough, of Kiss Kiss, Bang Bang and not in a good way.  This is the kind of film that influenced that homage for sure, but all the gritty, now corny elements are there in spades.  What is missing is any real humor.  I attribute the absence of this to the time period and the turning point that was taking place in the film industry.  It would have been strange to have this be too comical, with the plot chosen, at the time. 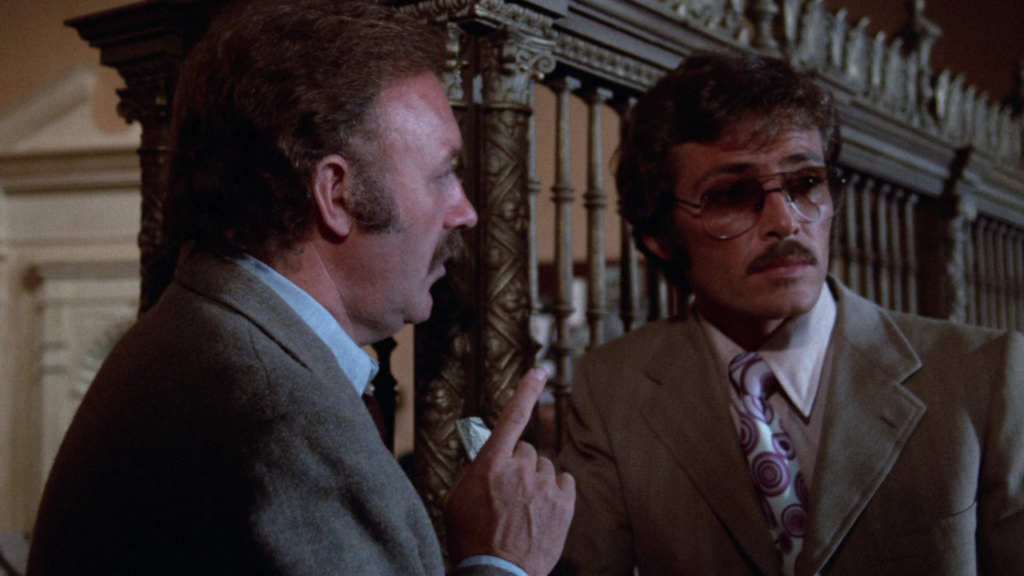 The transfer of Night Moves turned out really well.  I am glad that with a film that is nearly forty-five years old that it retained its graininess and still feels very tangible.  Almost like you can reach out and touch it.  It has a rather distinctive filming style, and reminds me of the original Dirty Harry which, as coincidence would have it, both films share the same cinematographer, Bruce Surtees. Surtees, it would seem, was still discovering his point of view during this time and he went in to work with Clint Eastwood several more times on some of his most notable films (The Outlaw Josey Wales, Escape from Alcatraz) but for me, the most notable piece on his resume is Beverly Hills Cop.  Now while this film is not on the same level as Dirty Harry, there are definitely some similarities in style and content.  That being said, beyond style, the added crispness from the transfer to blu-ray stands out and at times, comes across beautifully. 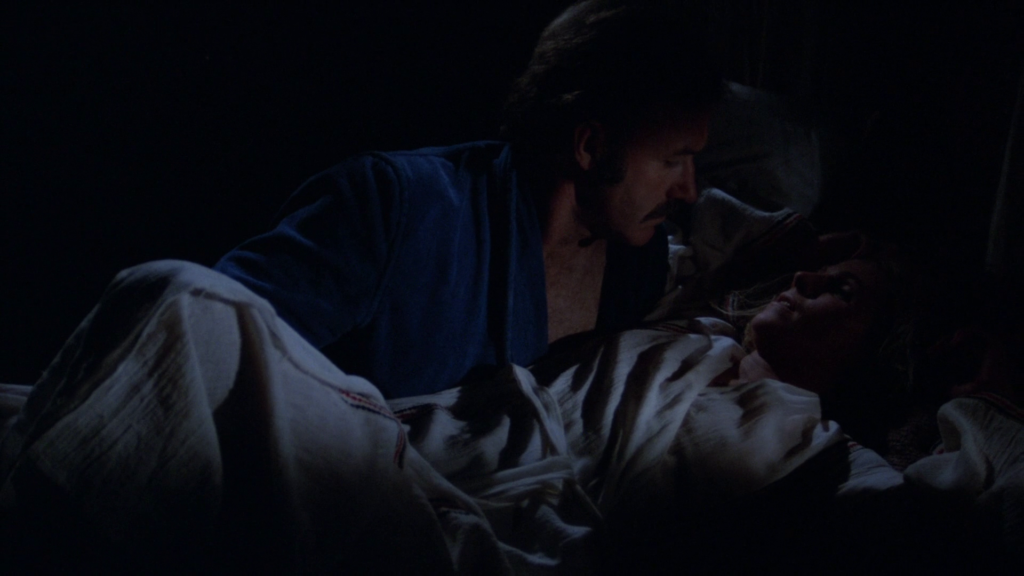 Composer Michael Small, definitely made a unique score for the film.  It bleeds the time period and genre of the film.  The score manages to simultaneously frame the tone for the film and the characters within.  I actually found the audio quality impressively consistent throughout.  Sometimes when a film is this old you can pick up on moments where the audio seems off or far away even, from improper handling or editing.  However, with Night Moves, I did not seem to notice.  I will admit that dialog seemed just quiet enough that I felt the need to keep subtitles on whilst watching the film. If you do not mind keeping them on I found it helpful in following through certain scenes having it on.

For a not-so-standard film, we have a fairly standard packaged release here.  Again WB Archives has done well to make this feel new.  The artwork is a little different than what I had seen online on IMDB and it feels new (even though it is probably not). The packaging feels really great in the hands and feels more sturdy than you would expect.  Again and I may be going crazy the shape of the case feels different than any other blu-ray release I have seen.  On the inside, I am glad to report that the disc does come with an image on it, and it stays true to the cover image enough that if you don’t utilize the cases and use a folio for storage it will stand out.

I am elated to see that the effort was made to include two extras.  We have a short featurette which is essentially a profile of Director Arthur Penn and his work on this film.  Spoilers must not have been a concern seeing how they give away the ending during the featurette.  Warner Bros. Archives also included the original trailer and although I cannot necessarily confirm it the trailer does appear to be upscaled a bit.  I would have loved to hear some looking back thoughts from Griffith, Hackman, and Woods, however, no such luck and at this point in time we’d be lucky if any of those Actors/Actress remember being in the film.

Night Moves offers an interesting tale, if almost nothing else.  The performances are nothing miraculous and the plot, as a whole, does nothing to stand amongst the much more impactful films of the time.  The biggest problem for me is a generational one.  I found it hard to picture Gene Hackman as a gritty detective as, for the most part, when I have seen him in a film, it usually tends to be an older role rather than sex crazy detective.  However, it is hard to say just how far-fetched this felt, because he played a key role in Bonnie and Clyde and given the state of films at the time it may not have been that hard to comprehend for a 1975 audience.  Beyond that, I had some issues with key plot points that I have already mentioned and overall I did not feel like the film accomplished anything story wise and especially not for our main character.  Overall it makes a nice talking piece on the shelf and WB archives did a great job restoring and making this available for blu-ray consumers.

You can purchase this and other great WB archives HERE.