To celebrate the success and eventual home video release of La La Land, as well as the recent resurgence in the popularity of Broadway musicals in mainstream culture thanks to popular musicals such as Hamilton and the like, reDVDit.com is kicking off 2017 by celebrate musicals in film. Our writers will be collaborating on the first fully fledged series of the year, as we revisit one of Hollywood’s most cultured traditions, dating back to the earliest examples of sound in motion pictures. Join us, as we explore a genre that once held a box office draw that parallels the comic book movies of today, and is now essentially extinct: the musical!

I’m not usually the one to jump on the cult film bandwagon, but dammit – I love Newsies. There’s something so irresistible about the subject matter, the enchanting music and choreography, and the passion that so often oozes into the set and costume design that recreated 19th Century era New York City. And I’m not alone – ravaged by critics, and isolated to die in obscurity forever, the 1992 Disney live action production was a massive box office failure that somehow got revitalized as a massively successful Broadway musical, running for 3 years and winning two Tony awards for choreography and score. It’s one of those rare movies that lingered for so long, held in suspended animation by a small but rabid fan base that just couldn’t let go, who pushed the powers that be at Disney until they decided to fully embrace it. Unfortunately, the reputation and massive success of the Broadway show doesn’t make up for the film version’s many, many issues. 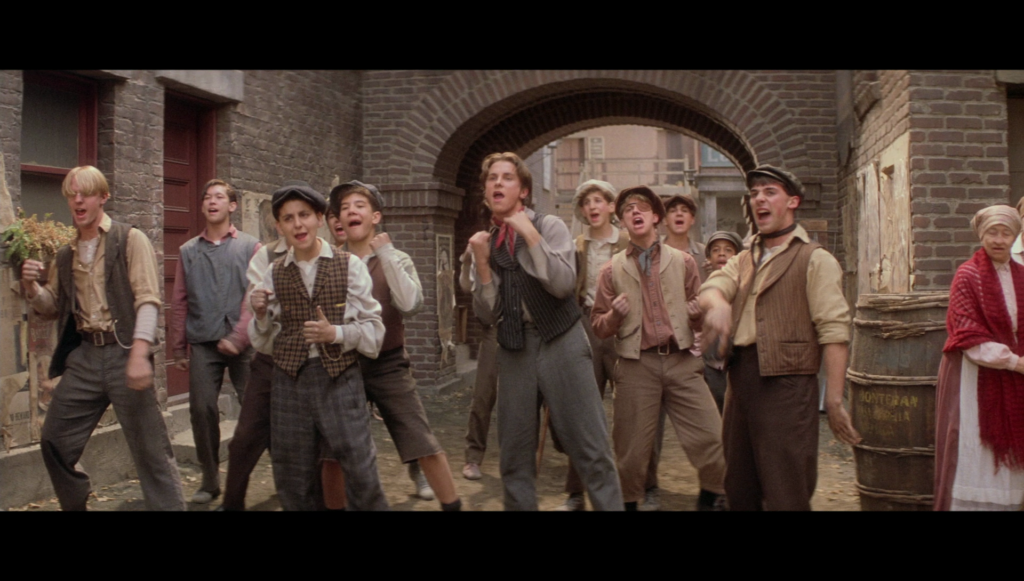 Newsies tells the story of the newsboys’ strike of 1899, in which the newsboys of New York City stood together against Joseph Pulitzer and William Randolph Hearst’s refusal to lower the prices of the cost of their newspapers to the newsboy distributors. Highly fictionalized, the film is all about how the strike began as a movement spearheaded by two boys, the charismatic Jack Kelly, and the far more timid brains of the organization, David Jacobs to fight back against the price increase inflicted upon the Newsies by Joseph Pulitzer. Working together with a large gang of their peers, they recruit the city’s various factions of Newsies to join in to fight against the injustices inflicted against them. A fugitive from a children’s rehabilitation center, Jack must fight not only the muscle hired by Pulitzer to intimidate them, but also the police force of New York City and the evil Warren Snyder, who wishes to condemn Jack and his friends to rehab for his own personal gain, in order to save the Newsies from destruction at the hands of greed.

Newsies is a movie propelled forward by heart, but at the end of the day that’s all it has, and movies cannot be propelled to greatness by heart alone. Where it succeeds in replicating the energy of large scale Broadway-esque song and dance numbers, it fails in spectacular style at presenting itself as an organized or compelling story. It builds little to no tension, struggles to choose which of its 4 villains are truly the one we need to be worried about, and disregards any attempt at developing any of its leading characters in a meaningful way. Side characters are tossed about, and just for good measure, there’s some truly cringe worthy one-liners tossed in to make you groan extra hard while you wait for the next showstopping musical sequence. 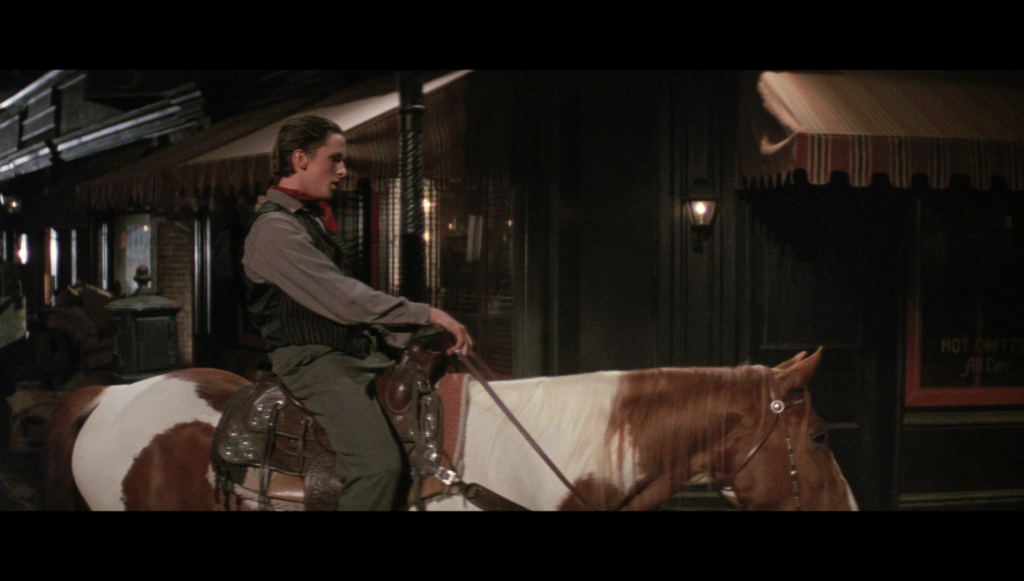 I get that this is a movie for kids, and that when it comes down to it, these movies are almost always going to be style over substance, but sometimes it feels like a kid directed and edited this movie together. Performances, especially that of a rather young Christian Bale, are often so over the top and goofy, saddled with some terrible accents and lines that make it hard to take many of the Newsie characters seriously. It’s like director Kenny Ortega asked his cast to over-exaggerate as hard as they could; this goes for some of the adult performances as well, as Robert Duvall has the weakest and worst motivated meltdown of his career during the film’s climax. The film marginalizes of its supporting characters, with Ann Margret turning up for a song or two, but also to infuse some awkward middle aged sex appeal into the film for some reason and Kevin Tighe shows up to just sort of be angry and vengeful to Jack and his band of kids, which makes him just seem sad more than intimidating. Jack Kelly’s character somehow ends up getting the girl as the film wraps up, but the romance that was supposed to develop between him and Sarah Jacobs is cut down to roughly 3 seconds on screen time, and it just feels contrived to the point of absurdity. 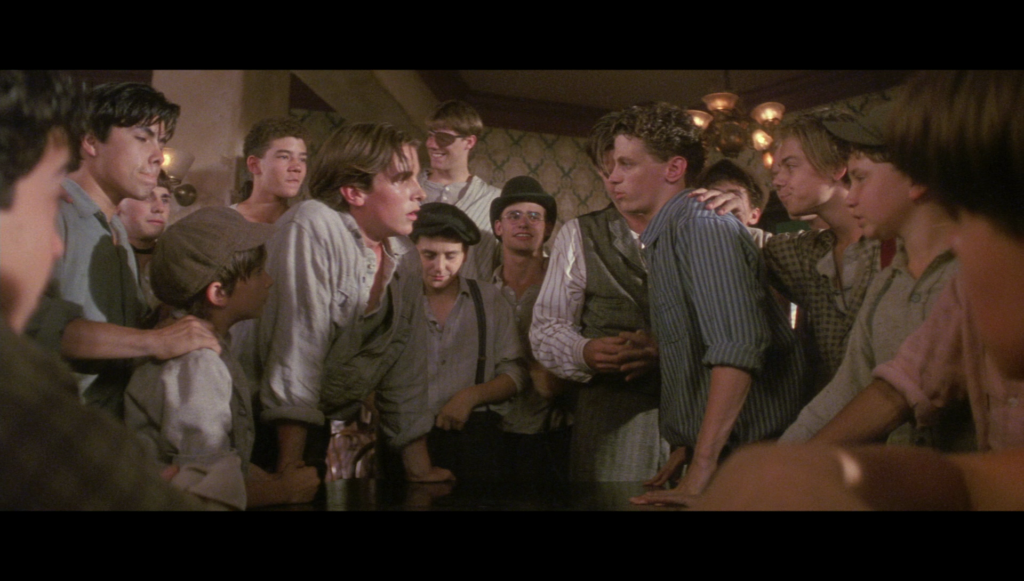 But even when the script lets you down so thoroughly, the music kicks in, and aside from the horrible singing voice Christian Bale brings to the table as the aforementioned Jack Kelly, magic just sort of unfolds. Backed by music written by Disney legend Alan Menken, and choreography created by the director himself, widescreen magic just explodes off the screen. The cast of Newsies dance and sing like a troop of hardened experts, dancing across the 2.35:1 aspect ratio image singing songs such as, “Carrying the Banner,” or, “Kings of New York,” that make you truly believe in their cause, no matter how lame Spot Conlon’s cries of BROOKLYNNNNN come off during his few appearances. The energetic camera work helps bring New York City to life as the Newsies dance in large, well organized crowds through phenomenal sets that do a fantastic job of recreating the appropriate period look.
The musical fan in me wants to tell you to run, don’t walk to see Newsies, but the hardened cynical film critic in me wants to tell you to run as far away as you can. It’s a difficult balance to maintain, as I consider myself a devout fan of the film, but am more than capable of identifying it’s faults and soldiering on regardless. It works better as a soundtrack, and even better than that as a Broadway musical. This is one of those movies where you already know you’re going to be a fan, or you probably wouldn’t find yourself watching it in the first place. 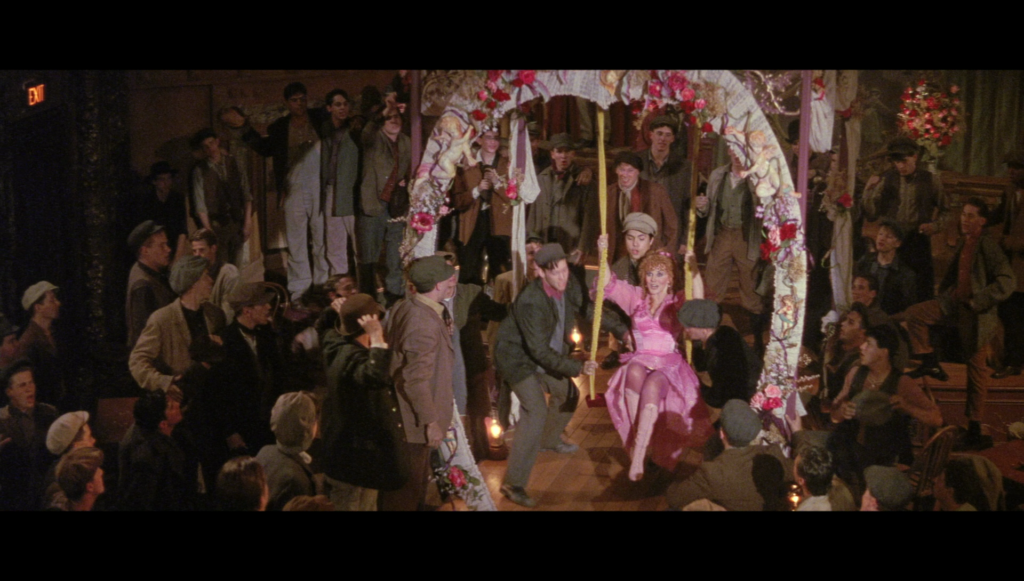 The master used to create this high definition presentation is so old that it still retains the classic blue castle Disney logo at the beginning. Right off the bat, from the first frame, the film is covered in a layer of ugly grain, which complements an image that is often soft and ugly, especially when upscaled to 4K. Color is often drab, and the presentation suffers from terrible black levels, especially during the nighttime sequences.  The presentation isn’t all bad however, as the occasional close-up reveals decent detail, but it certainly isn’t the norm. There are moments of the film where I suspect that some light DNR has been used, which only helps embellish the softness of the picture. The image is clean, but stability is occasionally an issue. I suspect however, that this might actually be the best looking presentation of Newsies we’ll ever get out of Disney, which is heartbreaking for fans of the film. 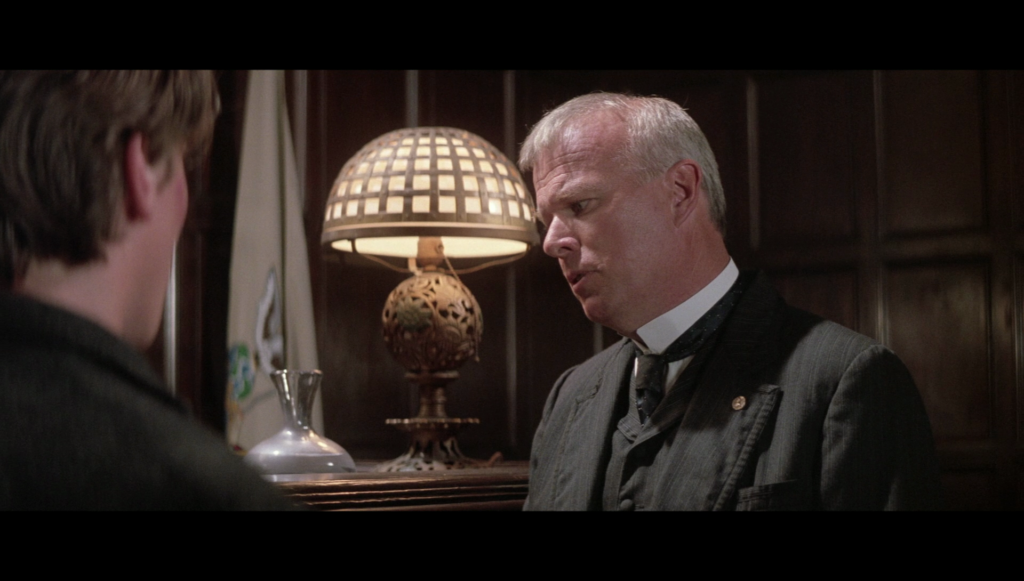 Buried underneath an often times ugly video presentation is a lovely surround sound audio track. The voices of the Newsies are carried in a loud and clear manner, filling the room as they assemble to full strength and belt out their musical numbers in unison. Voices and cheers pan effectively across the front sound stage based on relative positioning, and the subwoofer kicks in on occasion to add some excellent force to key moments, such as a massive set of doors triumphantly exploding open to release the crowds. It isn’t Star Wars by any means, but it just feels right.

Newsies: 20th Anniversary Edition has been released on home video by Walt Disney Home Entertainment in a standard Blu-ray keepcase. The front artwork features the title for the release atop an incredible low resolution picture of the Newsies jumping, in mid-air freeze frame with a tagline and a review quote. The back artwork feature a list of features taking up the top third, above a couple of headshots of key characters, a paragraph about the film, a list of technical specs, and credits for the release. Honestly, a pretty ugly dress up job for a supposed, “anniversary.” 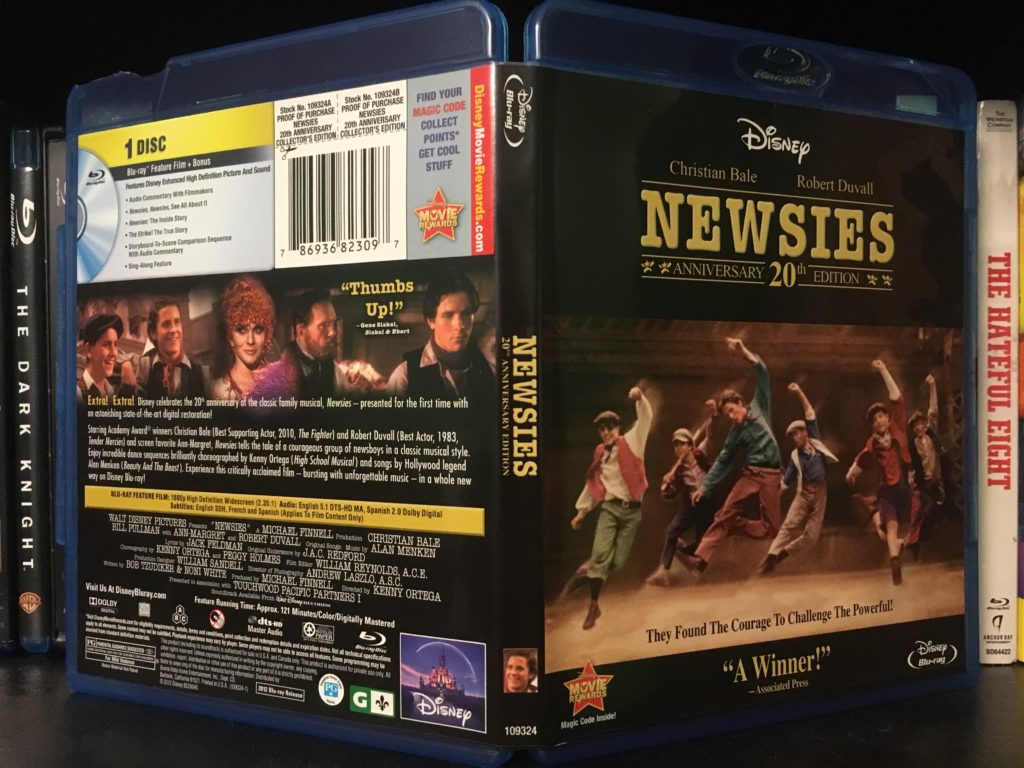 Commentary – feature length commentary performed by the film’s director, producer, two writers, and co-choreographer. Well performed and full of various stories and insights into the film.

All features are presented in 4×3 standard definition, sourced from previous releases of the film.

Newsies, Newsies, See All About it – a 21 minute long promotional feature created while the film was in production for TV, in which 3 of the Newsies explain what the movie is about, and their experiences making the film including rehearsing for and shooting the film.

Newsies: The Inside Story – a 19 minute feature from the perspective of the adults who were part of the production including director Kenny Ortega, composer Alan Menken, and other members of the cast and crew.

Strike! The True Story – an 18 minute documentary feature on the strike that the film is adapted from, discussing the events of and the historical context of the events of the film. Features insight from the film’s crew, and a variety of historians to encapsulate the time period in which the film is set.

Storyboard-To-Scene Comparison Sequence – a look at the storyboards for various shots from the film, intercut with the filmed sequences from the movie to demonstrate how the storyboards were realized. Features commentary by production designer William Sandell.

Theatrical Trailers – the film’s 2 trailers, used to advertise the film during its theatrical run. 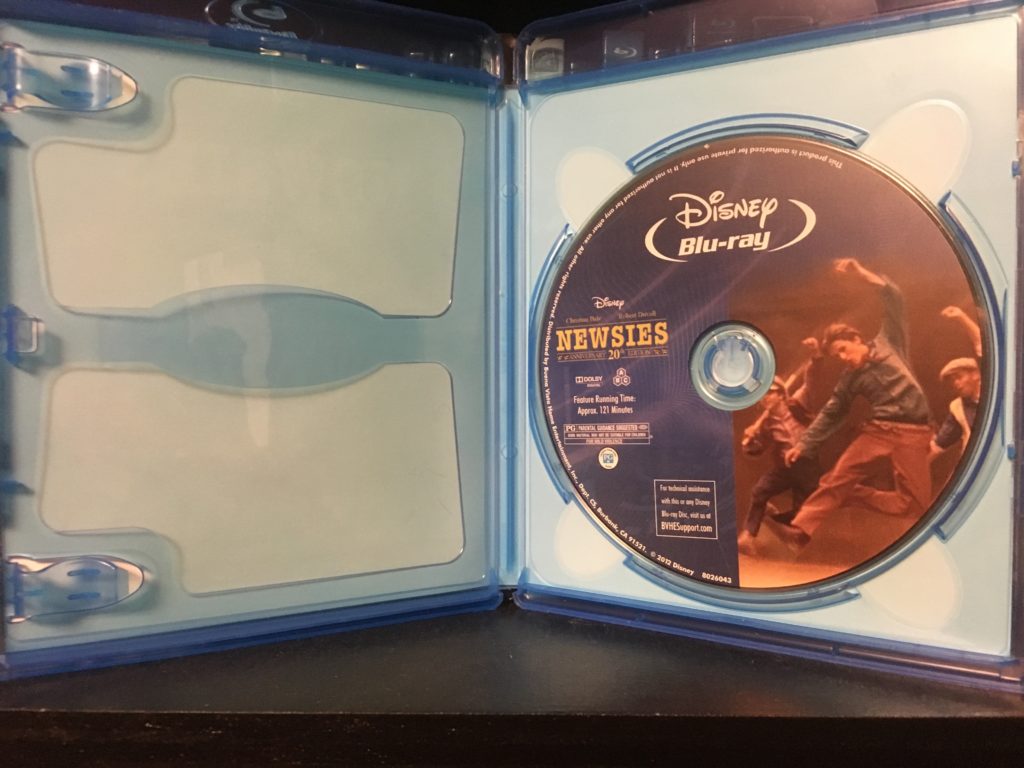 It’s a shame that Disney couldn’t put together any new features for an anniversary release such as this one. I guess that’s what happens when you try to cobble together a release of a film your studio would rather forget about. 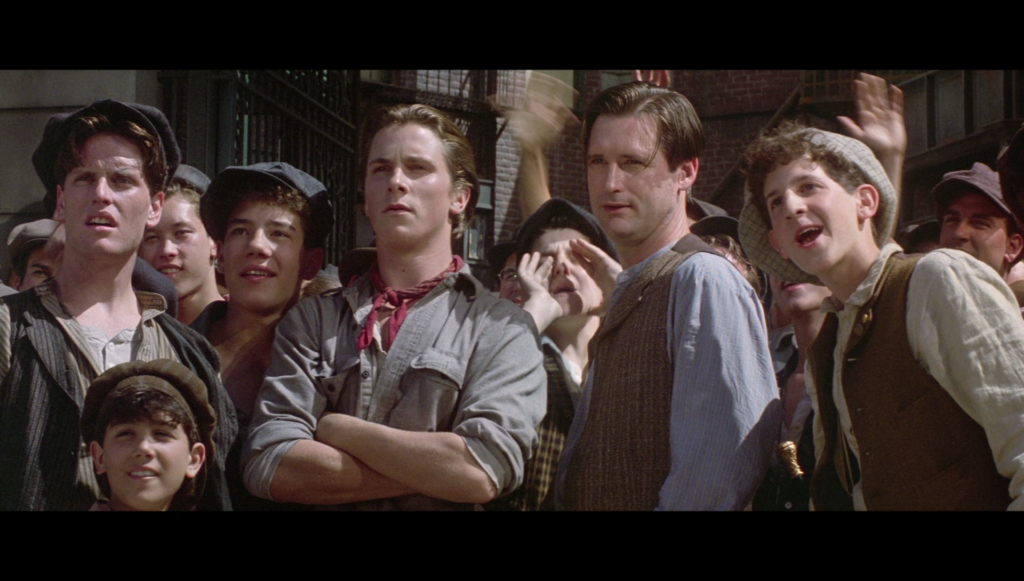 Newsies is a mess of a movie. But it’s a personal favorite of mine. It has all the makings of a great musical, but also the makings of a terrible Disney Channel Original Movie. For every phenomenal musical number, there’s an underdeveloped character, or a terrible line of dialogue and then some. Luckily, this isn’t the only version of the story we’ll ever get, and as the basis for a great Broadway show it works out just fine in the pages of history. This 20th Anniversary Edition might have been acceptable upon its release in 2012, but age has revealed every wrinkle, with a terrible video presentation, recycled extras, and weak packaging. If there’s anything to celebrate, it has a decent audio track. I guess that’s something. Fans of the film probably already own this release, but right now its fairly cheap to acquire, so I wouldn’t hesitate the recommend it for those curious about such a movie.