I was a bit too young to really understand the scope of the damage done to New Orleans during the onset of Hurricane Katrina in 2005. On top of that, I’ve spent my entire life living in the northeastern United States, where many natural disasters simply don’t seem to materialize that often, so it made it hard for a young me to really take in the full impact of the devastation that impacted the people of the south during this time period. New Orleans Music In Exile, directed by Robert Mugge and produced under the Starz banner, is a 2006 documentary that explores that devastation, but through the lens of its impact on the vibrant musical community that exists in New Orleans. 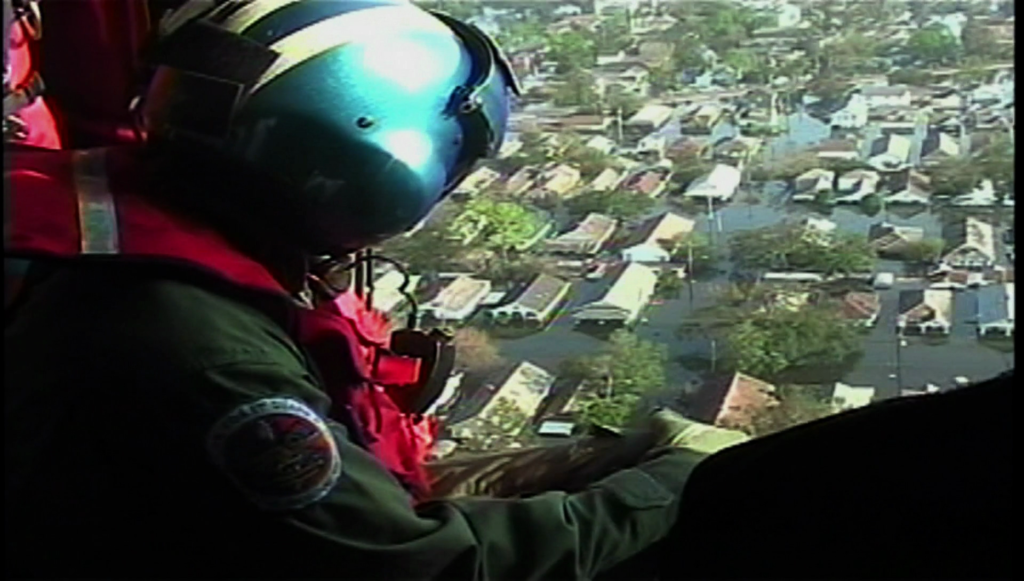 Music in Exile follows the story of multiple musicians, bands, writers, and members of the musical community that thrived in New Orleans before the hurricane struck in 2005. Through in-depth interviews, and a series of musical performances we get a glimpse into the lives these people led in the city before disaster struck, their experiences when it came time to leave the city, and their attempts to rebuild their lives in a post-Katrina world. Many of them talk to great lengths about the destruction to their property, the atmosphere in the city immediately following the storm, and their hopes for the future of the music scene in New Orleans. 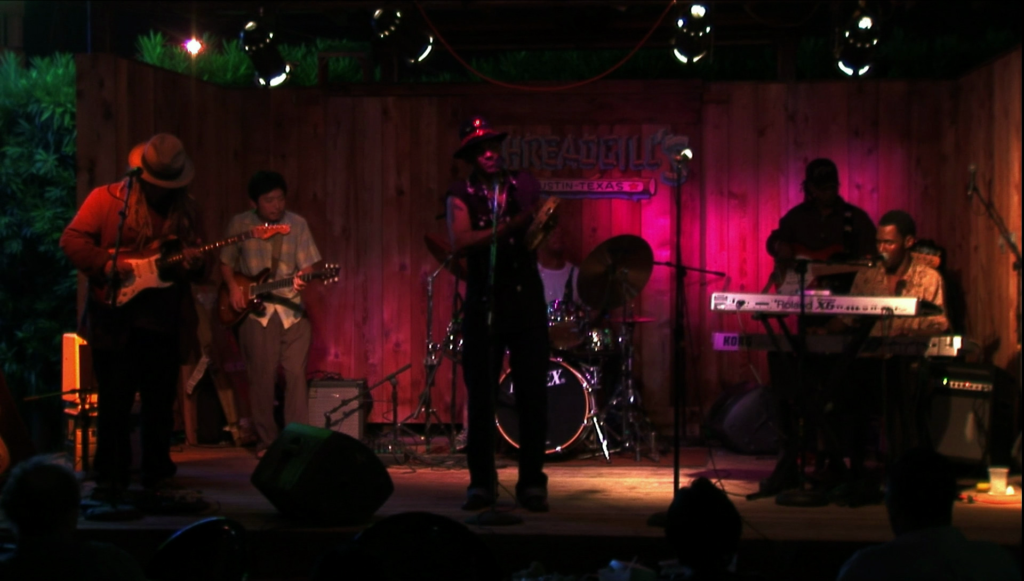 The documentary, released in the months following the initial disaster relief efforts by the National Guard and the government does an excellent job at displaying the extent of the damage wreaked upon the city. The majority of the artists and people involved with the music scene spend at least a small amount of time detail the water damage to their homes, and the movement of large objects and even entire houses by the flowing water, accompanied by vivid footage that does an excellent job of encapsulating the damage, and generating sympathy for the musicians of New Orleans.  Many of the musicians feel optimistic about their situation, even as the odds are stacked against them and rely on so many different things falling into place, and the documentary does an excellent job of establishing through interviews exactly what needs to happen in order to revive the New Orleans music scene, and paints as an enormous, but not impossible mountain to climb. 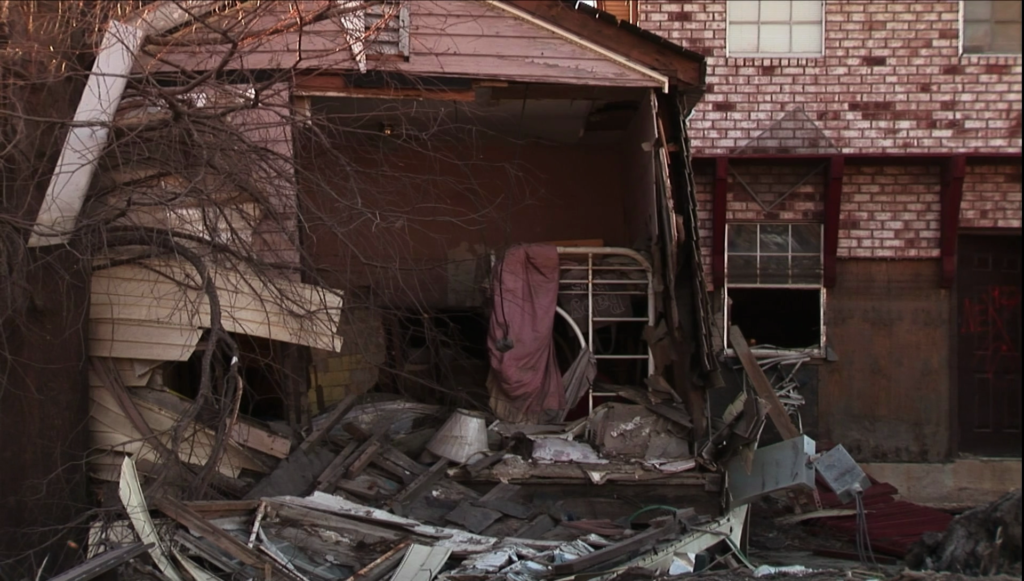 Where the documentary fails however, is in its editing and overall pacing. After a while, a lot of the stories start to blend together, and it feels like they follow a pretty basic outline that fails to differentiate much between them. A lot of them left the city, found new places to play, and then came back afterwards only to struggle against the devastation. At the risk of sounding insensitive, this story, when repeated over and over just kind of drags the pacing of the documentary down, especially when there are lengthy musical performances sprinkled between most of the interviews.

Although it gets repetitive over the length of its nearly two hour run time, the impressive display of musical talent, and the experiences they all went through during the onset of Hurricane Katrina makes for an inspiring, optimistic story. The documentary is crafted in a way that inspires hope, and makes for a fantastic memento of the impact of Hurricane Katrina on our country, especially for someone who was just a bit too young to really understand it as it happened in real time. For that alone, this documentary is impressive. To be filled with so many stories of perseverance makes it that much better.

Shot in 2006 shortly after the relief efforts for Katrina began and produced for the Starz network, there is little info on what was used to put New Orleans Music in Exile on the screen. The footage, outside of a few scenes of previous acquired footage from the early 90s was digitally acquired. The documentary is presented in 1080p resolution with an aspect ratio of 1.78:1. 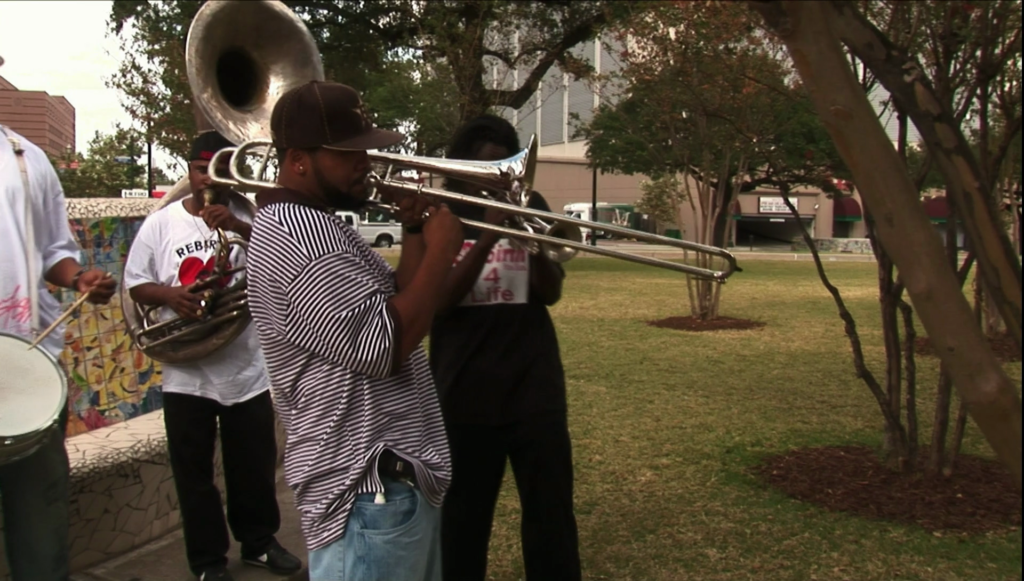 Music in Exile isn’t exactly what I’d call a pretty looking presentation, but that’s what happens when you combine 2005 amateur footage with professionally shot footage from nearly a year later. In 1080p, many of the 2006 interview and showcase sequences look decent, if not a little lifeless and lacking in detail. Many of the sequences look less than full HD, but not as ugly as upconverted standard definition footage. Cell phone footage and newsreel sequences from the actual events as they occurred looks understandably rough. Some older footage, sourced from a 90s documentary on one of the many clubs featured in the documentary looks soft and grainy. Overall, this documentary looks a little rough around the edges in hi def.

Music in Exile is presented on Blu-ray with a 2.0 LPCM stereo soundtrack. 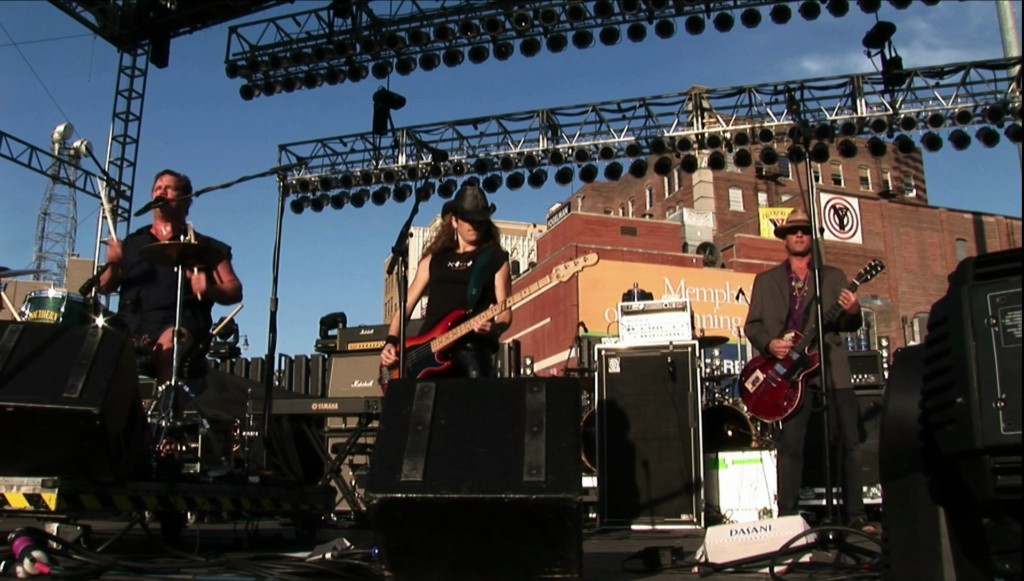 Most of this documentary is interview footage and on location discussions and demonstrations, which sound pleasant and easy to understand. For the most part, the variety of concert footage sounds great in stereo, with a nice resounding low end and great weight to the sound. A few of the larger venue sound board sourced concert sequences used towards the end however suffer from pretty heavy distortion, which makes for a less than incredible listening experience. Other than that, Music in Exile sounds perfectly serviceable.

New Orleans Music in Exile has been released to Blu-ray by MVD visual in a standard blue keepcasE. The front artwork features the film’s title and featured artists next to a blue colored picture of one of the featured musicians as well as a picture of the ruined New Orleans with a map of that various places musicians escaped to. The back artwork features a couple of frames from the documentary, a couple of review quotes, a lengthy paragraph to describe the film, a list of features and credits for the release. Nothing too striking, merely serviceable. 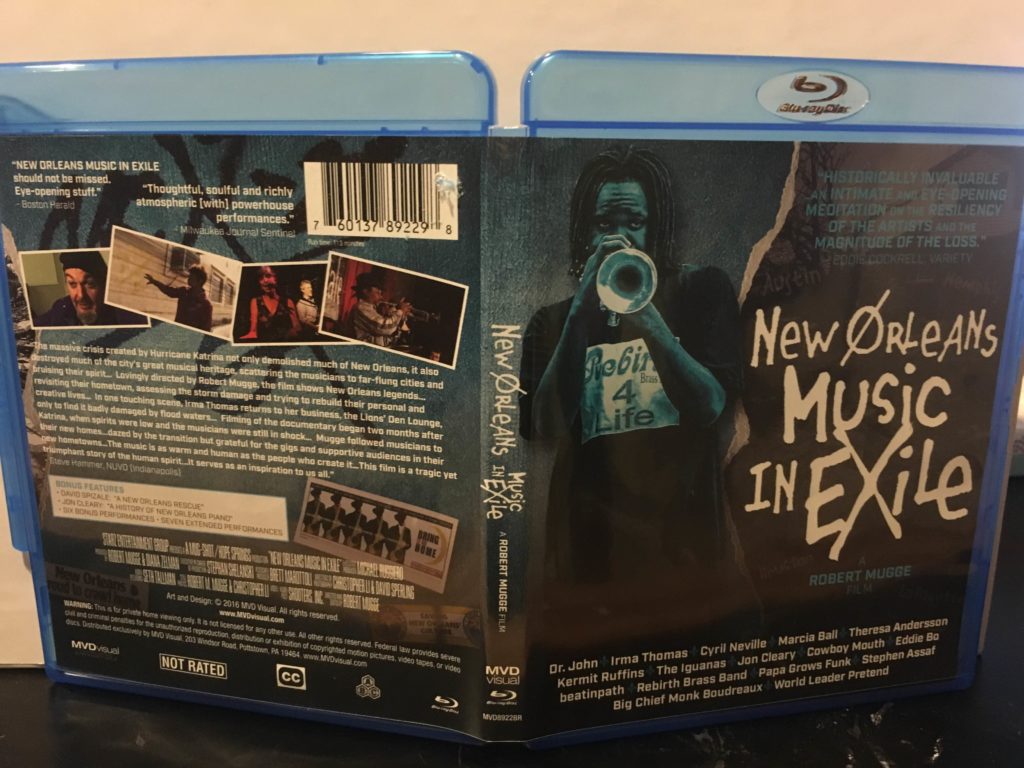 Bonus Performances: A collection of recorded musical performances from artists such as David Spizale, Jon Cleary, Theresa Anderson, and Big Chief Monk Boudreaux that were cut from the film’s release. 8 extra songs in total.

Extended Performances: full versions of the songs used in the film that were only used partially in the film from artists such as World Leader Pretend, Eddie Bo, and Dr. John. 7 full songs in total. 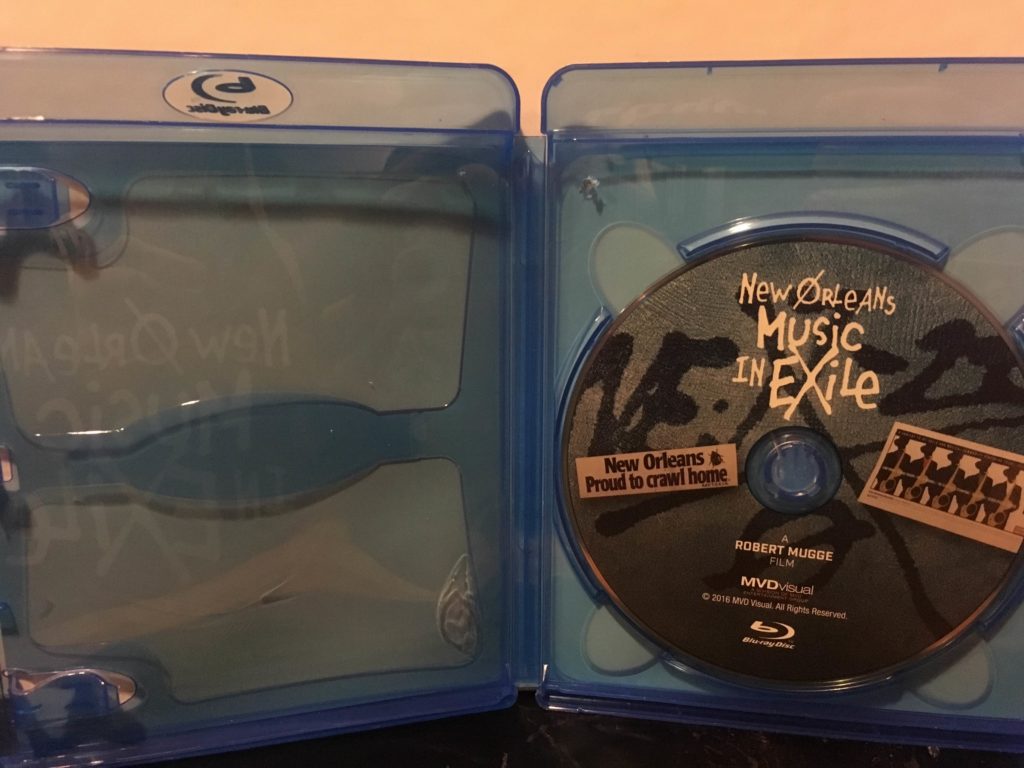 The included features are great for fans of the music highlighted in the documentary, but for any cut footage from interviews or any insight into production, it’s best to look elsewhere. The packaging isn’t particularly amazing either. 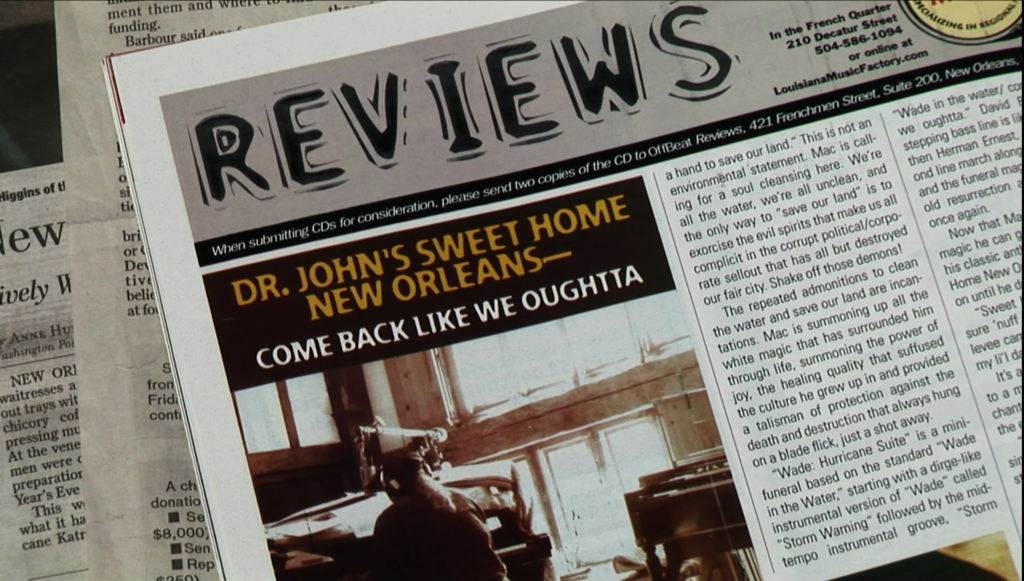 New Orleans Music in Exile is ten years old, but the tragedy feels as fresh and as devastating through the lens of these disjointed, disrupted musicians’ stories. Under the hand of filmmaker Robert Mugge, the film becomes a little repetitive over it’s nearly two hour runtime, but is countered by a wealth of wonderful, New Orleans tribute pieces from all the musicians involved that make it a compelling view. The film’s Blu-ray release features an average audio and video transfer, and basic packaging, but fans of the music that this documentary covers will find a treasure trove of live performances that make the disc well worth the price of entry. All in all, an engaging experience.