The cult classic TV show Mystery Science Theater 3000 XXXV contains 4 never before released episodes on DVD.  Has it been worth the wait?

For those that haven’t experienced this TV show yet, Mystery Science Theater 3000 (or MST3K) is about a mad scientist who forces a human into space for an experiment to watch bad movies. The mad scientist hopes to break the human’s mind and spirit with the bad movie and then unleash the film on the unsuspecting world (this plot line gets less and less apparent as the show goes on). The human is Joel or Mike depending on what episode you are watching and the mad scientist is either Clayton Forrester or Pearl Forrester and they usually have some sort of henchmen along with them.  The human host is joined by a couple of robots to then make fun of or “riff” on the movie while they watch it, taking commercial breaks to do little sketch comedy bits often talking about something they just saw in the film. Sometimes they might also watch educational short subject films before the movie. Even if people have never seen an episode most recognize it as being the show with a silhouette of 3 beings on a row of theater seats at the bottom of the screen.

The original show aired on local access in Minnesota and then hit the Comedy Channel (later called Comedy Central) and the Sci-Fi Channel until it was cancelled in 1999. The show ran for 10 seasons on cable with 197 episodes and a feature length film. MST3K was listed as one of Time magazine’s “100 Best TV Shows of all time” in 2007 and was nominated for numerous awards. I think it is really funny and it is one of my personal favorite TV shows.

Unfortunately there are rights issues with some of the films shown so rather than release entire seasons of the show Rhino and then later Shout Factory have been releasing movie box sets (usually totaling 4 episodes each set) a few times a year.  The episodes we get in Mystery Science Theater 3000 XXXV are two Joel and two Mike shows all from the Comedy Central era and they are:

Teenage Caveman is in season 3 episode 15.  It is a black and white Roger Corman film starring Robert Vaughn (Man from U.N.C.L.E., Superman III). Like most Roger Corman pictures this is a very low budget movie that was quickly shot with reused costumes and locations from previous films. It’s a pretty boring movie by itself with a somewhat interesting final 2 minutes. This is a pretty classic MST3K episode though with two shorts (Aquatic Wizards, and Catching Trouble) that Joel and the bots knock out of the park with their brand of humor. This episode is really fun and has strong host segments with lots of memorable lines.

Being From Another Planet is from season 4 episode 05. It is a color film from 1982.  This tries to be a horror/sci fi flick but seems to lack a bit of something.  It starts off as an adventuring tomb raid and turns into a college/frat party/mystery movie.  It is mostly average although there are a couple interesting/unintentionally funny scenes but thankfully Joel and the bots save us with their witty banter.  It is a silly movie which makes for perfect fodder for them.

12 to the Moon is from season 5 episode 24. This is a 1960’s black and white film about the first expedition to the moon with an international crew (hilariously bad accents included). You can tell that the makers of this film tried to be serious and carry a specific message to it’s audience but the laughable budget leads to lighting rigs being seen in shots and lawn chairs being used in the space ship. It is practically perfect riffing material and includes the must see short “Design for Dreaming”!  This episode features Mike Nelson and his robot pals.

Deathstalker and the Warriors From Hell is from season 7 episode 03. This is a late 1980’s movie and is the third in the Deathstalker series. This is another Mike episode but TV’s Frank has been replaced by Dr. Forrester’s mom Pearl.  I remember when this one aired and I am so happy to finally have it officially available. It is so cheesy and so 80’s! It is a sword and sorcery movie with very little death and absolutely no stalking. This movie is almost total camp and has loads of bad acting and therefore is a very enjoyable riffing experience.

MST3K was purposely produced with a cheap set design and obviously fake special effects in order to mirror the types of movies they would be watching.   Also it seems that the source material for the movies themselves were of video tape quality so no amount of clean up would fix that.

After watching so many Blu-rays sometimes it is shocking to the senses to see DVD quality material again, but even by DVD standards the picture is only average.  I know these look better than they did on the old circulated VHS tapes copied directly from when it aired on TV and honestly I’m just happy to have them available in any disc form. There is only so much you can do with shows shot in this low resolution format and so it is more a knock against a 90’s TV show with a modest budget than anything Shout Factory did with it’s transfer although I do think it is important to know how it looks. It is consistent with the other volumes in this series so if you already have some then you will know what you are getting into.

The audio has similar knocks against it as the picture quality. Usually everything from the sketches to the riffs are mic’d correctly and can be heard clearly. There are occasions where the movie itself is not though and this hinders being able to hear dialog. Often the MST3K guys will mention this in their jokes and even ask what the character said or what the line is supposed to be but it is nice to be aware of the limitations of it. You’d get the same amount of dynamic range playing this out of the speakers on the TV as you would any kind of sound system. 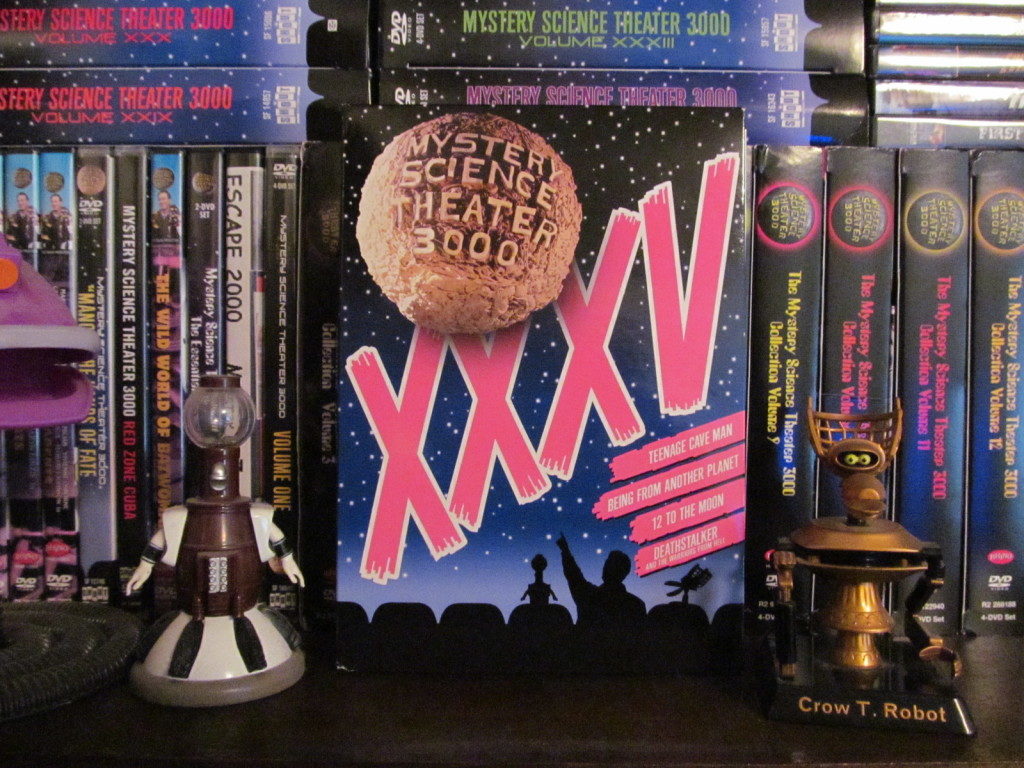 *NOTE – the figures aren’t included in this box set, I’m just showing off!

Mystery Science Theater 3000 XXXV has 4 discs that are packaged individually in a slim clear plastic case with new artwork for each movie episode encased in a paper box.  I’ve never had any extreme damages so far but the boxes tend to bend a little which creases the spine and get scuffed edges occasionally so if that bothers you then it might be wise to look for a physical copy in your local media store.   The disc art has a plain star field background with a stylized color font of the movie title.  The disc is held firmly in the case and they snap closed very nicely.  They match the look of all the other box sets from the Shout Factory era to make a nice clean look on the shelf.  Each box also contains 4 exclusive mini-posers by artist Steve Vance that repeat the picture from each case cover.  I’ve never had any specific use for them and just leave them in the box but perhaps some enjoy this added feature.

The special features are kind of a mixed bag.  There are a few interviews that talk about the respective movie but none of them ever talk about the film being on MST3K.  In previous box sets they had some mention of how the actors/director felt about their film being riffed or how the show increased the popularity of a forgotten movie.  At times in the past the cast of MST3K were interviewed or introduced the episode or had a special feature from a convention or live show.  It is just a bit disappointing that no special feature had anything to do with the TV show.  It is nice to have a cleaned up unedited version of the Time Walker movie, but this had been previously released a couple years ago by Shout Factory in a movie pack and I’d imagine people that really wanted it already bought it at that time.

I was a Teenage Caveman (12:56) Interviews and clips from Author/Film Historian C. Courtney Joyner, Director/Producer Roger Corman and others.

Being From Another Planet (Time Walker) Original Unedited version (1:25:42)

Launching 12 to the Moon (9:18) Filmmaker/Historian Jeff Burr talks about the film.

While these episodes may not rank in the top 10 Mystery Science Theater episodes of all time I feel it is certainly a worthy addition to my collection and hopefully to yours too!   I can understand people just not being into this type of humor or perhaps they don’t enjoy bad movie watching.  I can also understand people being turned off by the average picture quality and audio if they aren’t used to the show.  I could even understand people not caring about the special features very much and therefore I adjusted my rating accordingly.  For me, every new MST3K DVD box set is a must buy and if you are a fan I highly recommend it.  If you haven’t seen the show and any of this interests you in the slightest I would suggest checking out or renting one of the streaming episodes and go from there.  Hopefully you will find that you enjoy it just as much as I do.