Moonwalkers, according to its packaging, is a movie based off of a “true conspiracy theory.” Adjust your expectations accordingly. Conspiracy theories are often somewhat outlandish and goofy, and this movie is no different. 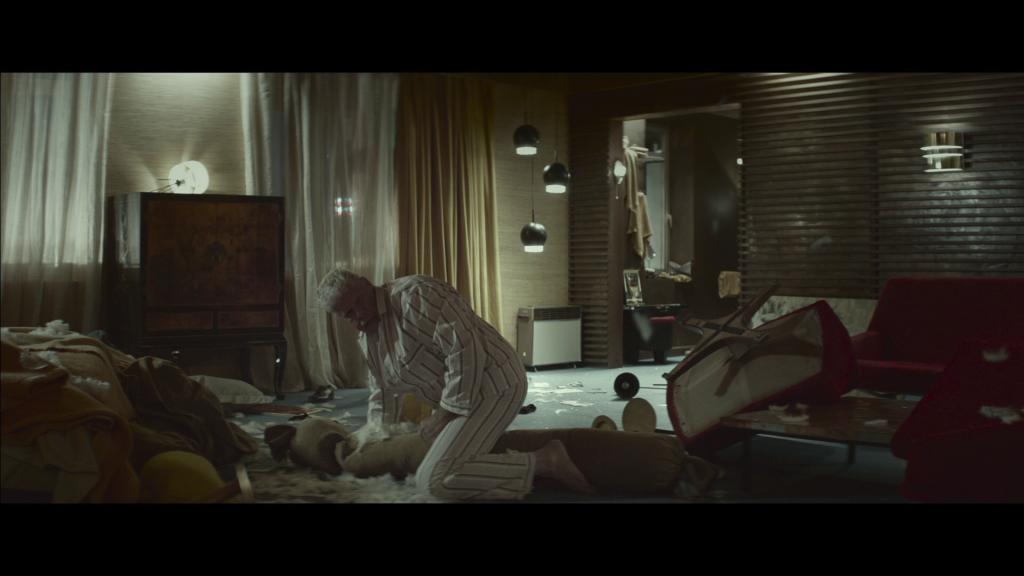 Moonwalkers tells the tale of CIA agent Tom Kidman, who is tasked with tracking down and hiring Stanley Kubrick in order to have him film a version of the moon landing that the government can show in case the Apollo 11 mission fails. Running parallel to that, is the tale of a down on his luck band manager, working with a terrible band and at the end of his rope in terms of debt to shady characters. In an act of desperation, he pleads his cousin, Stanley Kubrick’s agent, forhttp://redvdit.com/reviews/wp-content/uploads/2016/03/vlcsnap-2016-03-11-17h47m19s038.png help. In a moment of confusion, the CIA agent comes to his cousin’s office, finds him, and ends up hiring him and his friend, impersonating Stanley Kubrick, to fake the moon landing. The movie takes off from there, taking you on a drug infused, artistic mess of a production cycle, with a crazy auteur-ish director, strange actors, brutal gunfights, and ultimately an honest attempt to fake the moon landing.

Moonwalkers sounds goofy, and lighthearted on paper, but in execution, it is a bit of a mess. The tone of the movie is conflicted, unsure of whether or not it wants to be a goofy, drug trip of a ride through the late 60s, or a rough and tough violent crime driven adventure. Often times, the script attempts to mold these two into one, resulting in some crazy, and often out of place violence, the likes of which is often brutal and very visual. There’s very little build up or real justification for such intense violence, and it doesn’t really feel all that satisfying when its over. 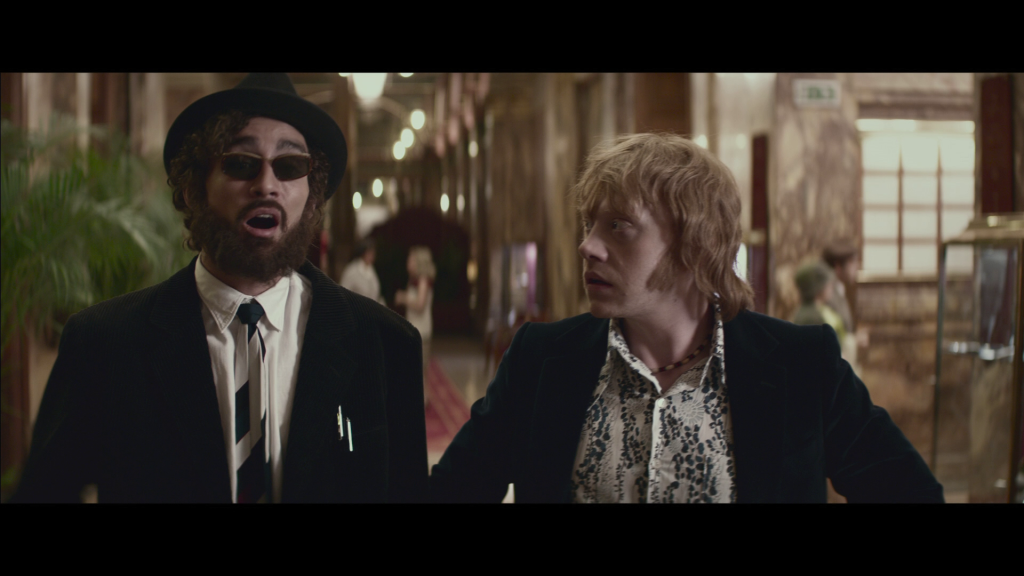 In terms of acting, I feel like Ron Perlman was the wrong man to cast in his role. His demeanor on screen feels a little unenthusiastic at times, and a little stiff. I get that Perlman typically plays kind of gruff, intense characters, but I’ve seen him really embrace certain roles, and I just didn’t see the same energy and enthusiasm in this movie that I’ve seen in others, such as Pacific Rim. He’s goofy, but he isn’t very funny in a movie that’s desperately trying to be a comedy. Rupert Grint, however, plays his role with much enthusiasm, and really embraces the struggling nature of his character. The rest of the cast of goofy and strange supporting characters is solid, with a rather convincing set of performances across the board. The production design and costumes are great, really pulling you into the setting of England in the 1960s. Its a real shame that the script couldn’t be a bit stronger. 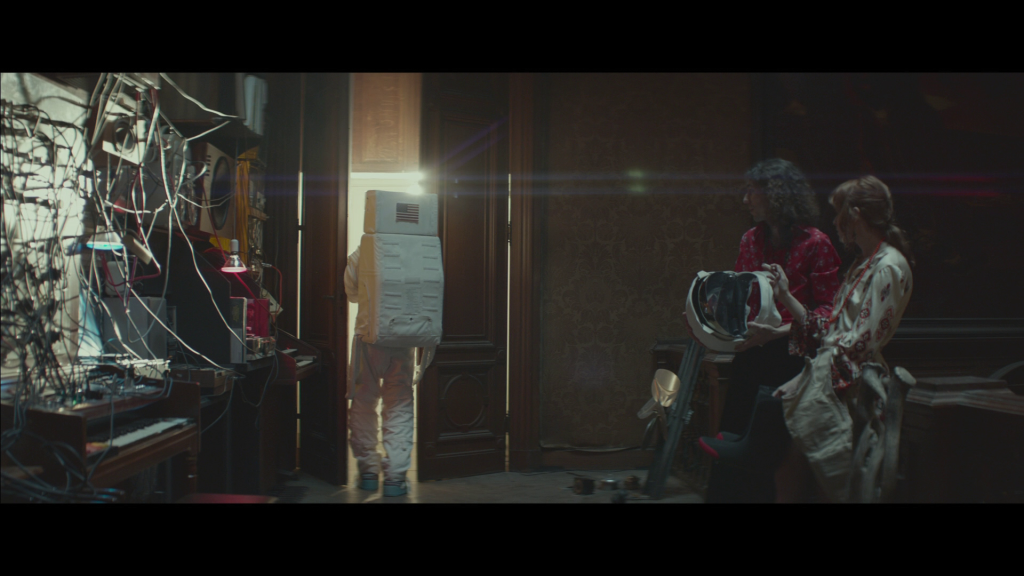 Overall, Moonwalkers is a movie that struggles to balance two parallel storylines, juggling them unevenly to the point where one just feels totally unjustified and out of place by the end of the film. Most of the performances are convincing and enthusiastic, but the script feel a tad bit awkward, and falls into some standard drug movie tropes that just feel worn out. The movie isn’t a total waste of time, and many will find amusement in some scenes, but probably not the entire movie overall. There’s an interesting story to be told here, I just wish it was told a little bit better.

Moonwalkers, shot digitally, and framed in the 2.35:1 aspect ratio for theatrical presentation, is presented here in 1080p, accurately reproducing the 2.35:1 scope framing of the film. Additional details concerning cameras, shooting formats, and digital intermediate info is sparse, but it is safe to assume that the movie was most likely cropped from a spherical source, and mastered at 2K resolution. Until other info is available, I stand by this opinion, and will change it when the information is made available if it is made available. 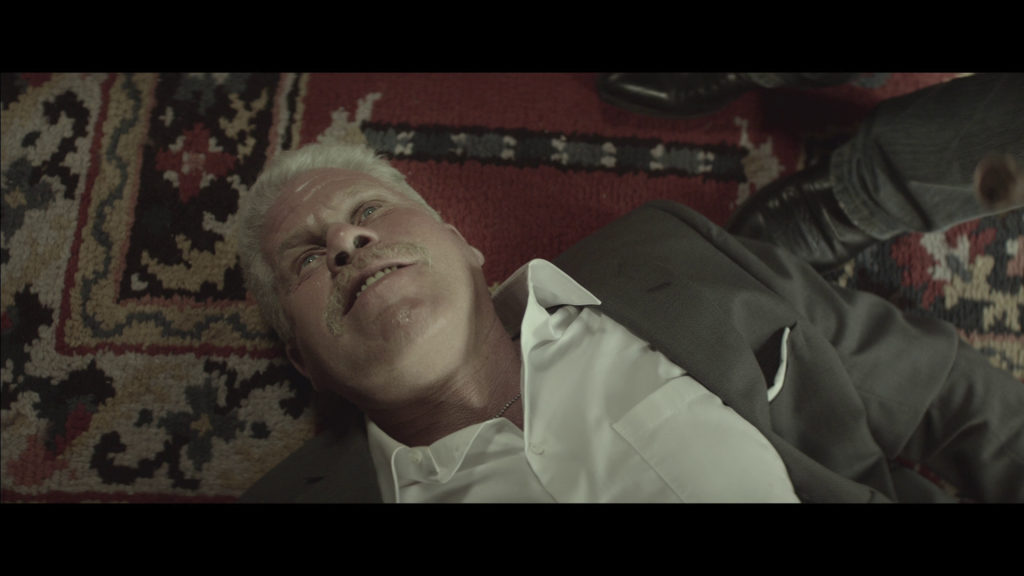 That being said, Moonwalkers is kind of an oddball movie to take in on Blu-ray. The detail, while present on occasion, often gets lost in an overly soft style of shooting. This was most likely done to help the feature embrace its roots in 60s conspiracy culture, a time when Panavision’s anamorphic lenses were often very soft, as seen in movies like The Graduate. The film’s color scheme doesn’t exactly fly off the screen either, with facial features often resolving as a sickly gray, and colors overall are very muted and unappealing. Compare live action shots to the bright, colorful animated credits sequence in the film or even some of the special features included on disc, and you’ll notice a drab, flat, almost monotone color timing that saps the life out of the feature’s image. Contrast really isn’t that great, outside of the brief scenes of extreme violence where the blood flies every which way. Digital noise spikes on occasion, but it isn’t too terrible. Overall, I was not too impressed with Moonwalkers’ 1080p Blu-ray appearance.

The film features a 5.1 DTS-Master Audio soundtrack, that unlike the video, really holds up. The opening scenes of the film take place in Vietnam, and the explosions and gunfire whiz around the soundscape, with a nice and intense amount of low frequency. This level of great sound design carries throughout the film’s hour and a half run time. Frequently, our cast of characters find themselves in bars, and parties where music pulses in the background, and fills the room. Licensed soundtrack pieces come off wonderfully. 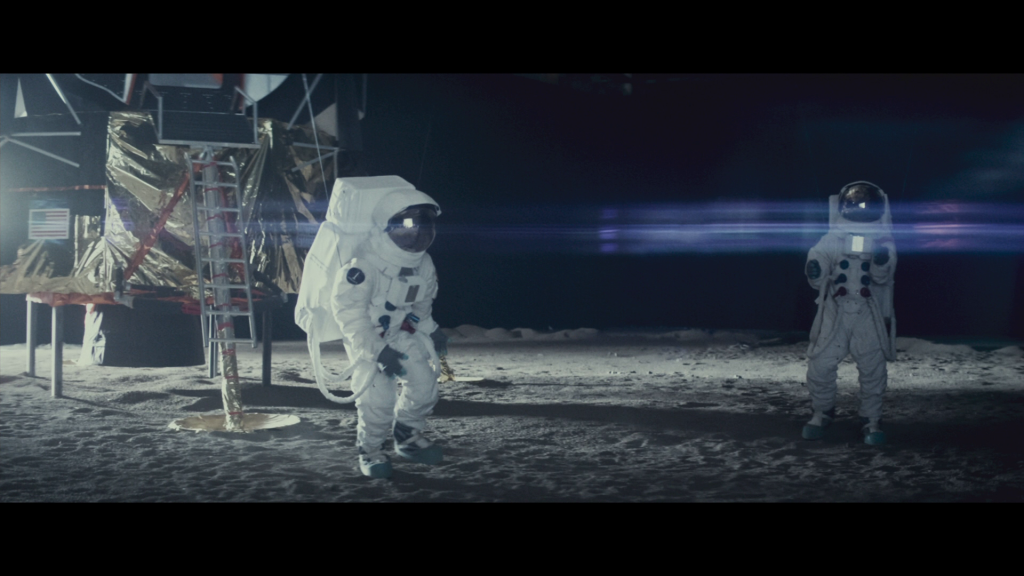 Overall, unlike its drab video presentation, Moonwalkers’ features an engaging, forceful, and fun 5.1 sound mix, one that never feels too intense, but never too quiet either. Its just right for a movie of its caliber, and serves the movie well.

Moonwalkers is released onto Blu-ray in standard keepcase with a lovely, colorful slipcover. The use of bright colors and psychedelic imagery fits right in with the style that the film tries to create. The back artwork is pleasing, with a few memorable moments from the film picked out, with some technical info and a paragraph description of the movie itself. The case features identical artwork to the slipcover, and features no reversible cover or any sort of insert. 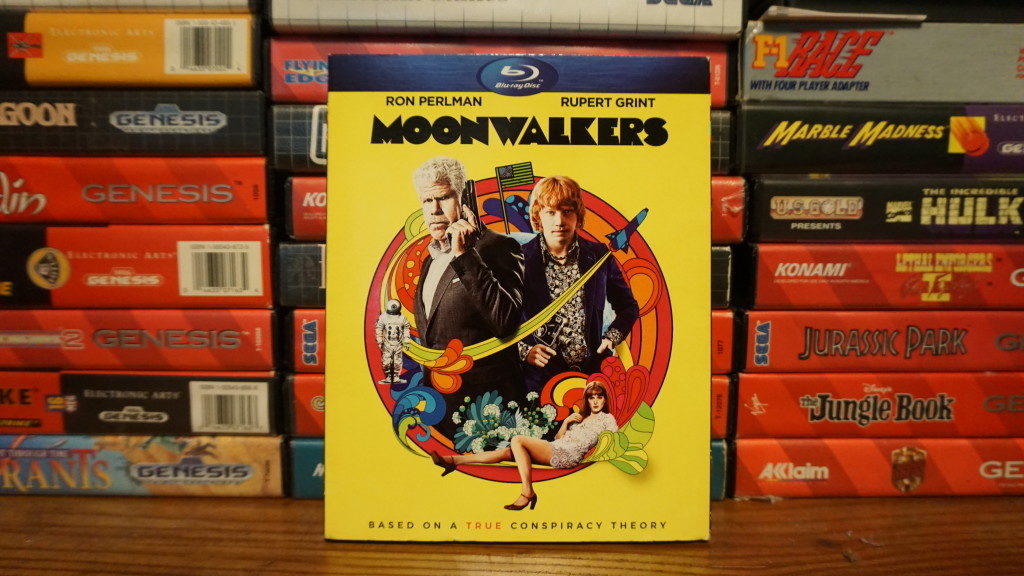 As for special features, Moonwalkers includes a series of interviews, a feature on the production of the film, and three deleted scenes from the film. They are as follows:

Making of Moonwalkers – this feature, the longest of the bunch, feature clips of different talkers discussing the making of the film, the improvised nature of the comedy, and the general attitude on set. Most of the key actors are interviewed, as well as the director. A few near behind the scenes shots from the set are highlighted. Overall, there’s nothing absolutely crazy about this one. 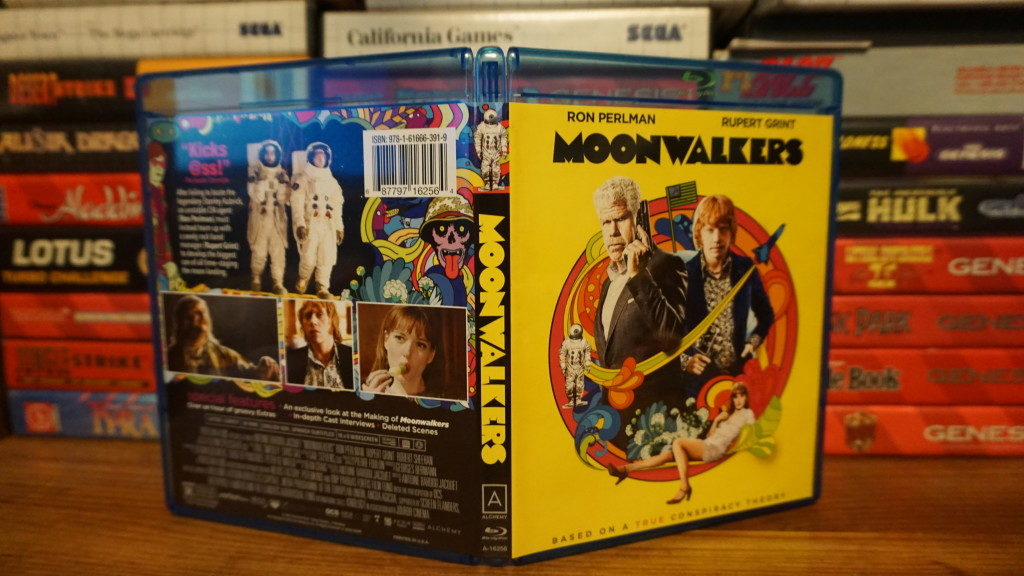 Actor/Director Interviews – Rupert Grint, Ron Perlman, Robert Sheehan, and Antoine Bardou Jacquet talk about their experiences working on the film, their reactions to the release of the film, and their general feelings about the topics covered in the film. These reviews are kinda dry, and mostly talking broken up by slides of text with the questions. This one’s for fans of the movie only, as they didn’t do much for me.

Deleted Scenes – 3 deleted scenes, one featuring an explosion excised from the end of the film, one where a hammer is featured prominently as a tool to threaten Rupert Grint’s character, and one featuring the fictional band from the film, performing their song called, “Salamander in Love.” Its pretty clear why these scenes were cut from the final movie, as they’re kind of uncomfortable, and tough to sit through, especially in the case of the song performance. 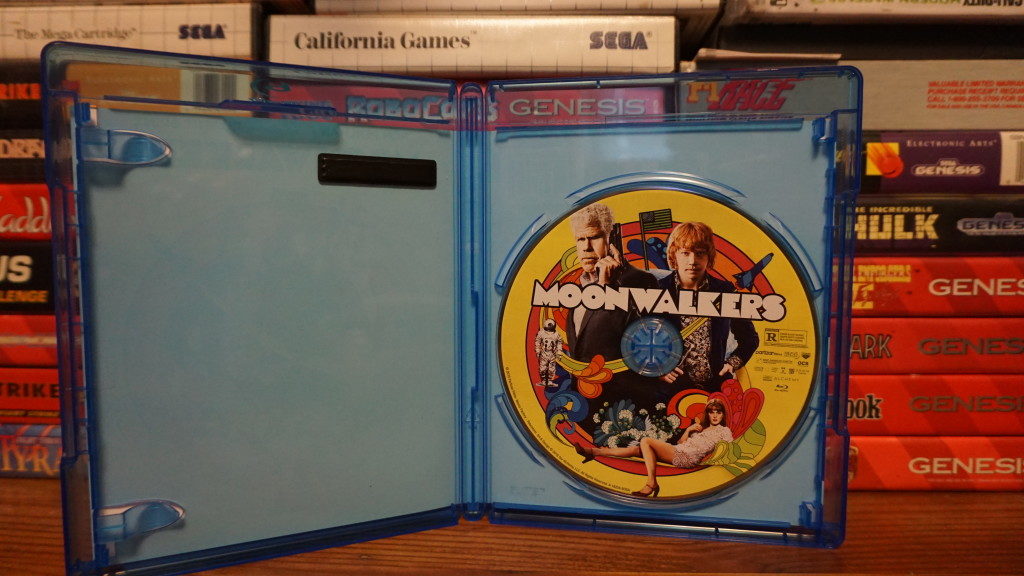 Overall, the packaging is fairly appropriate for this style of film. The special features however, weren’t too exciting, and didn’t do very much to expand my knowledge of, or endear myself to the movie very much.

Moonwalkers just wasn’t for me. The film spends far too long on the moon landing aspects of the story, and as if the filmmakers realized they’d made a mistake mentioning it earlier, they felt it was necessary to shoehorn in an unnecessarily violent climax for the film to tie it back to the crime ideas they had earlier. It has that cultish style to it, and I feel that many moons from now, it will become a low key classic of sorts. As for the blu ray package itself, the movie doesn’t do itself any favors, with a visual transfer that often falls soft, and features bland, flat colors throughout its hour and a half run time. The audio track is excellent, and appropriately fun to listen to, but the special features don’t really do a whole lot for me, striking me as something only fans of the film will appreciate. I don’t feel like I wasted my time with this one, but I do feel it could have been spent on something much, much better.