As everyone knows at this point, Moonlight is your new Academy Award winner for Best Picture, in one of the greatest and most infamous Oscar moments of all-time. Moonlight also took the Oscar for Best Original Screenplay as well as a Best Supporting Actor win for Mahershala Ali. The film tells a very personal story about a young black man named Chiron growing up in Atlanta, struggling with his sexuality, his drug-addict mother, and the fight to find his place in a tough inner-city environment. The film follows Chiron through three phases of his life, broken down into chapters, where we start with Chiron as a small child, follow him to his teenage years, and then close the film with his life as an adult.

The film is an emotional drama, in a similar vein as Manchester by the Sea, but simply explores a different theme, focusing more on the sexuality of Chiron and his difficult upbringing. It plays a bit like Boyhood, as we see the main character progress through life, hitting all of the typical hurdles along the way. Mahershala Ali, although only featured in a third of film, is well deserving in his role, and he is really the highlight of the film as a Cuban drug dealer who takes in a young Chiron during the first chapter of the film. Honestly, after the first act, I was not super impressed with the rest of the film. I thought it was fine, but there are certainly other movies which put together a better three acts than Moonlight in 2016, but as we know, the Oscars are an extremely political event. There was simply no way that anything other than Moonlight was going to win the Best Picture Award this year, unless something like Immigrants: The Story had been produced before our last American election. The political climate was ripe for a film like Moonlight to win this award, and based on past Oscar winners in the Best Picture category, it was probably deserved. However, by no means is it the greatest achievement in film from 2016. 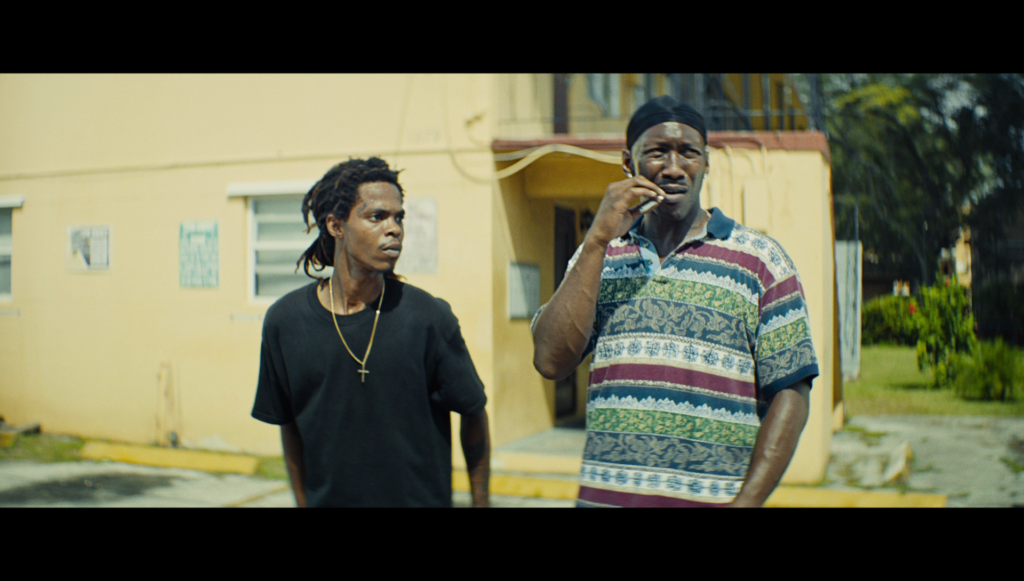 When you are dealing with the Oscars, the problem is that they are only as relevant as the latest political storm that has hit American culture, and the politically correct choice too often outweighs the taste of the general public. Moonlight deserves the Oscar, but only because I know what the Oscars stand for. La La Land redefined and reignited an entire genre with its brilliance, Manchester by the Sea was a superior film that spoke to similarly deep themes, although they were not a hot topic in 2016, and even something like Hidden Figures or Hell or High Water has much more re-watch value than Moonlight. I will say that Moonlight tackled a topic that goes overlooked in film, and spoke to an audience that is obviously not me, so take my opinions on it with a grain of salt. This is to say that I connected much more with Manchester by the Sea and Hell or High Water because the topics were more easily relatable.

Moonlight is certainly a historic film, especially being the first film to win Best Picture with an entirely black cast, but it will be easily forgotten like many of its predecessors in this category. When is the last time you watched Annie Hall compared to Star Wars, Chariots of Fire compared to Raiders of the Lost Ark, The English Patient compared to Fargo, or Spotlight compared to Mad Max: Fury Road, The Martian, or The Revenant? These are all Best Picture winners compared to films that were nominated in the same year, and for the most part, the nominated losers are the much more memorable film. Moonlight spoke to a hot topic, tackled diversity in Hollywood, and became a historic winner, but the bottom line is that in 20 years, films like Hacksaw Ridge, Hell or High Water, and La La Land will still be favorites with tons of re-watch value, while Moonlight gets its due once a year when we remember how it won that Best Picture Oscar way back when.

Moonlight was shot digitally on Arri Alexa cameras and was finished at a 2K Digital Intermediate for release to theaters. The 2K DI looks above average on Blu-ray, but it is not a visual masterpiece. The film was shot on only a $1.3 million budget in a fairly short amount of time, and it shows in some scenes. The cinematography is interesting in much of the film, and some of the lighting that was used does make for a memorable picture. There is a blue/purple tinge to a good portion of the film, with an amber brown tint being used for other scenes, all as a creative choice by the director and cinematographer.  The camera is fairly active for a slower drama, and the shaky cam can get difficult to watch at time. However, it is a low budget feature, and this is part of what feels so indie about it, as some of the scenes look beautiful while others are shaky, partially out of focus, or fuzzy. It doesn’t detract too much from the final product, but it may be annoying to some. 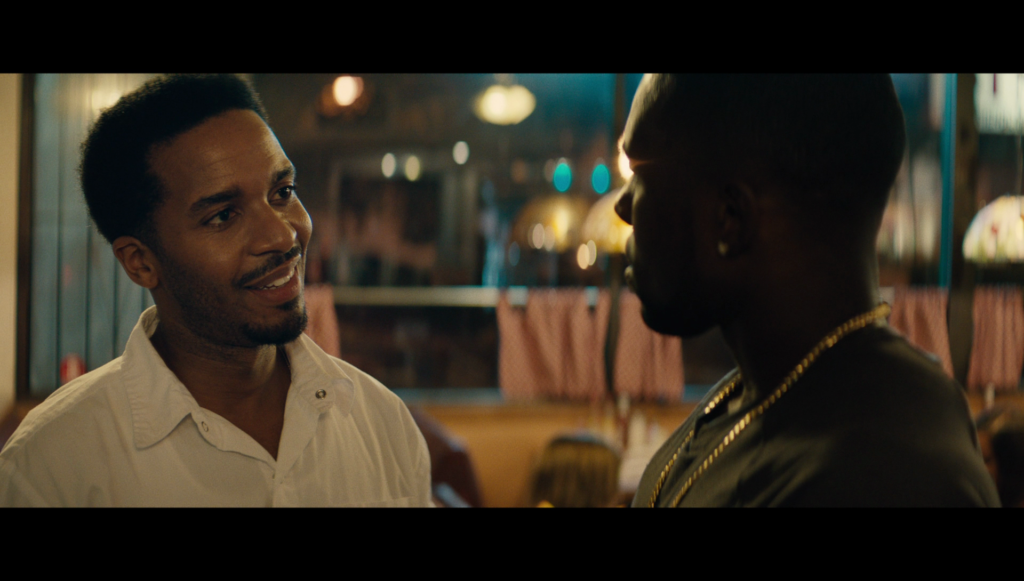 Sporting a fairly basic DTS-HD Master Audio 5.1 track, Moonlight is also a fairly basic overall audio experience. Surround effects are limited, and dialogue is the key driver of the film, so the center and front left and right speakers will get the biggest workout. The center channel sounded especially great, but I was underwhelmed by the rest of the audio compared to other modern releases. I didn’t expect much given the subject matter, so I recommend to set your audio expectations low. The surrounds only get use in outdoor scenes providing ambient noise and by spreading the movie’s score across the five channels, and the front speakers really handle the workload for most of the film. Dialogue is strong, as mentioned, so make sure you have a strong center channel and you will be fine. No drastic volume adjustments were needed after the first initial setup.

Moonlight hits Blu-ray with a pretty basic single Blu-ray disc and Digital Copy package in a blue eco-case. The Digital Copy is redeemable on UV services, and first run copies will come with a slipcover. My slipcover has a Golden Globes banner on the top, so it will be interesting to see if they re-issue the slipcover with some mention of the Best Picture win. Only time will tell. There is no DVD included with this release. 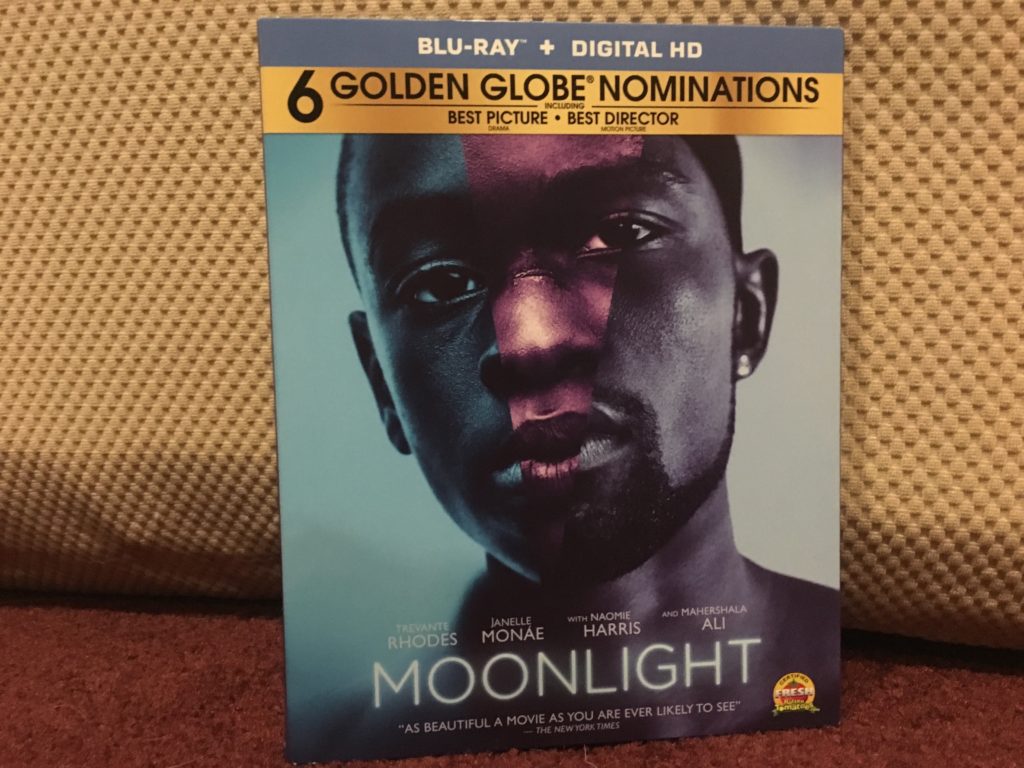 The special features are a bit more inspired than the packaging, although they are still a bit lacking for what is now a Best Picture winner. Director Barry Jenkins supplies an audio commentary track, which is interesting and worth a listen, and there are three other features. A longer, roughly 20 minute “Making Of” feature does include plenty of interviews with the cast, as well as a ten minute feature on the music, and 5 minutes on Miami as a shooting location. The stuff included here is nice, but there could definitely be more, especially after the massive win at the Academy Awards. 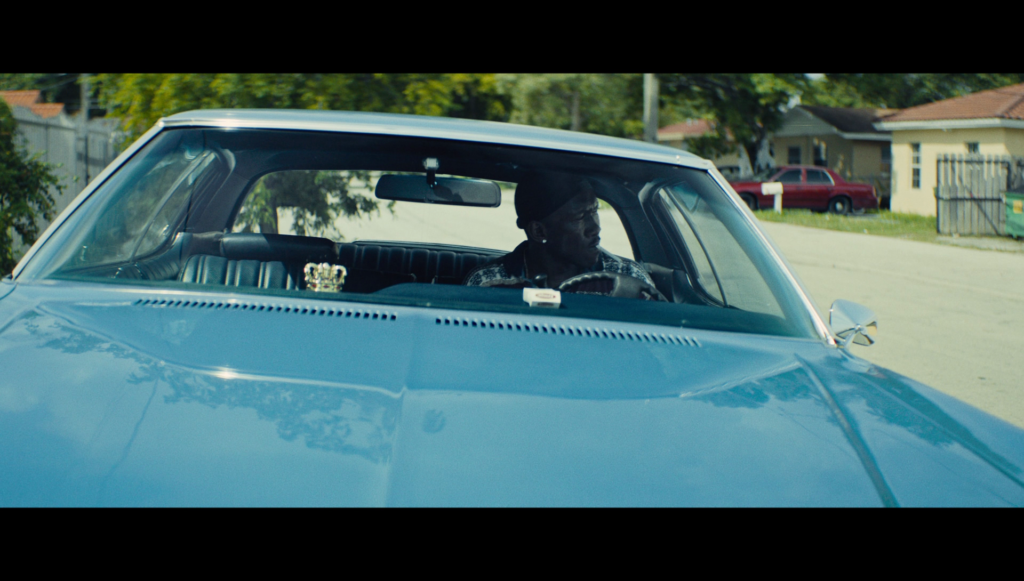 So, I’m sure most of you think I didn’t like Moonlight based on my review, but you couldn’t be more wrong. I enjoyed the performances, liked the story, but I just did not personally connect to it, hence the score of 3.5. I also do hold a bit of a grudge for it winning over my favorite picks for Best Picture, but I know that this is how the Academy operates, and there was no surprise when the correct winner was finally announced. I still think that this is one that will be forgotten, as a limited crowd can connect with the story, as important as that story may be. The video is a bit shaky but solid, and the audio is average but effective. I will always recommend picking up a Best Picture winner to collectors (something I am trying to do for all 89 winners, and counting), so I do hope that everyone runs out to grab Moonlight on Blu-ray. It is worth supporting indie films like this, but also worth supporting one of this decade’s finest distributors in A24, who are doing excellent work in the indie film scene. You can find Moonlight on Amazon or at retailers everywhere, available now!