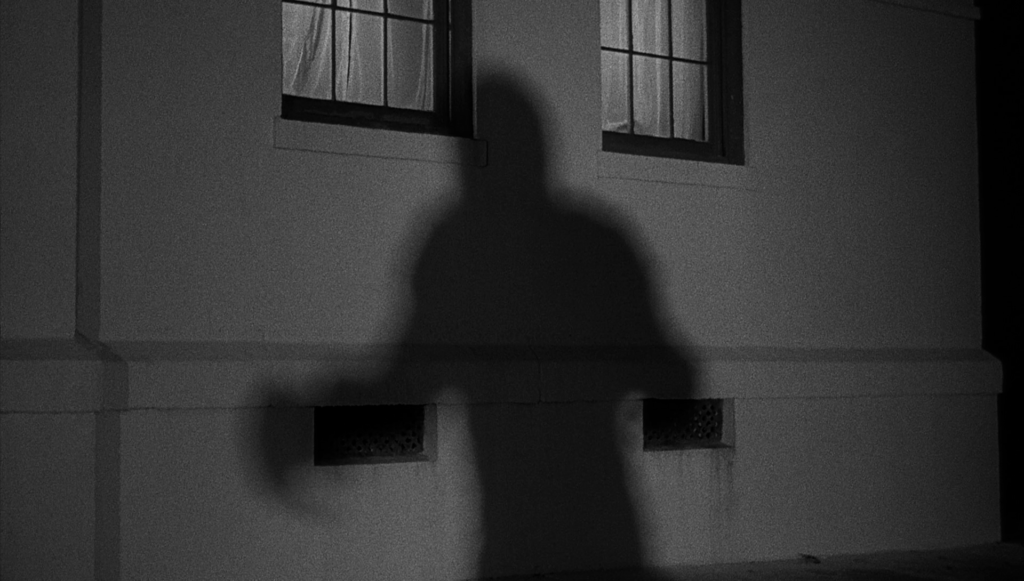 The Monster of Piedras Blancas follows a small town lighthouse keeper and the local townspeople in their encounters with the mythical monster. Sturges is the lighthouse keeper, and he always leaves food out for the “monster in the cave”, even though no one believes his stories. However, as more and more bodies pop up on the beach, the townsfolk begin to take notice. The story is pretty straightforward; a classic case of the “crazy old man” who believes in the creature that eventually terrorizes the town. It is a classic trope, but a tired one, even in 1959.

The Monster of Piedras Blancas will appeal to those who enjoy old 50s sci-fi schlock and cult movies from the time period, when science fiction was king. Even hardcore fans of the genre will notice that the film has its issues. For example, the monster does not make an appearance until far too late in the film, which really drags on until we hit the climax and the big reveal. I kept waiting and waiting for some cheesy practical effects, and the poorly designed costume, but there was far too little of that. The film takes itself a little too seriously, and instead of cheesy B-movie action, we get far too much conversation. I will admit, I was a bit bored. It is worth a watch, and for collectors of obscure films, it would be a valuable addition to the collection, but I do not think it will have any mainstream appeal. To be fair, Olive Films releases are not meant for mainstream consumption, and they often release many different genres of film to appeal to a wide-range of collectors. 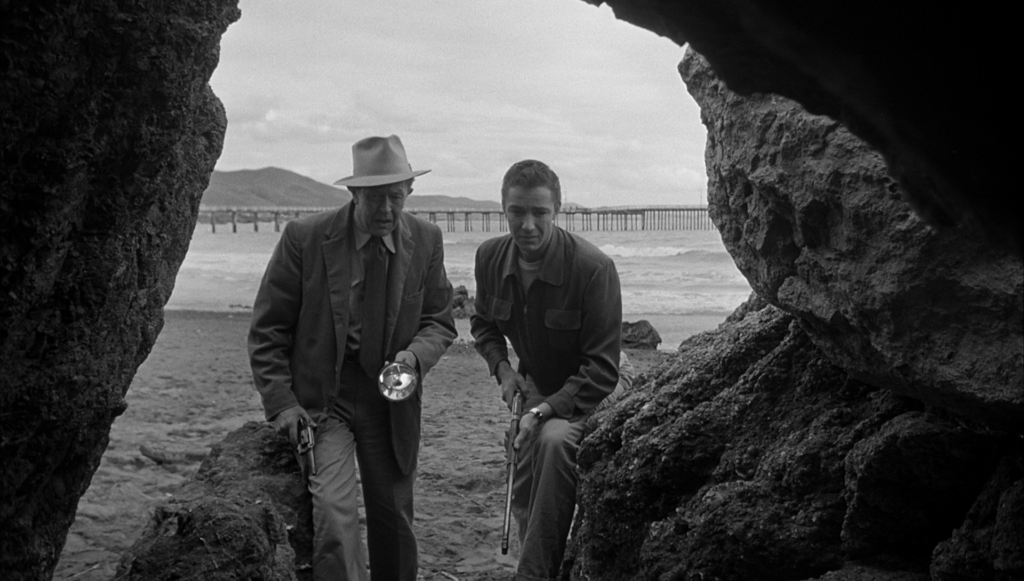 The video transfer from Olive Films is rough in too many areas to be considered even an average Blu-ray release. The source material is probably very tough, and the HD remaster from Olive is likely as good as this one will get, so props to them. However, the black and white image can be extremely grainy and soft, even looking out of focus in some shots. Most of this comes from issues with the source and the original camera work, so I do not blame Olive; this is just an ugly film. 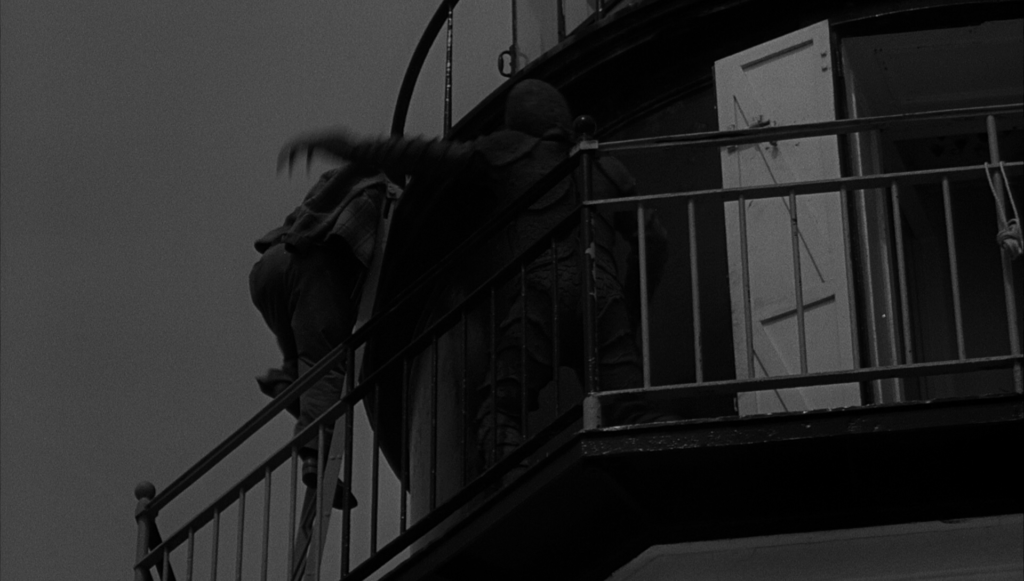 Black and white can look excellent on Blu-ray, and The Monster of Piedras Blancas does have moments that made me appreciate the format. However, they were few and far between, leaving me with an overall negative outlook on the video transfer. I do appreciate the look and feel of the film, and it truly gives the 1950s B-movie experience, but it simply is nowhere near the level of great black and white films on Blu-ray, even those which are decades younger than Piedras Blancas.

The mono track with this release will not blow anyone away, and it does require some volume adjustment, since a mono track only uses the center channel. Thankfully, my powerful SVS Prime Center speaker handled this track and the balance extremely well for being only a single channel audio track. However, the dialogue was tough to hear, and the soundtrack was fairly muted. The audio track is a tad bit better than the video transfer, but overall, neither of the technical pieces of this Blu-ray release are overly impressive. 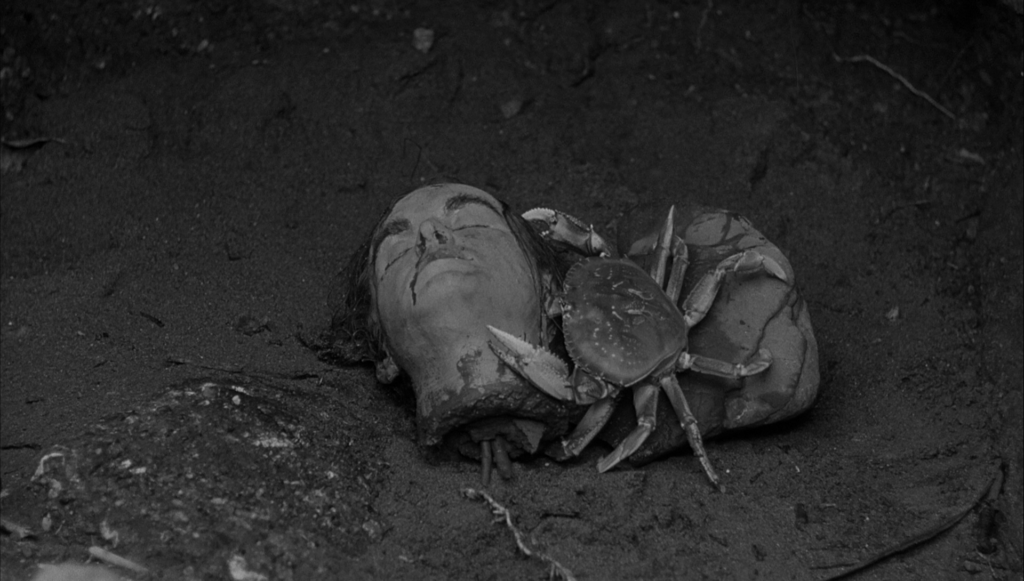 The Monster of Piedras Blancas comes in the standard Olive Films packaging, in a solid Amaray case with squared off corners and a numbered spine. The artwork is newly commissioned and looks nice, although the emphasis on the Monster for a film that barely features the titular character is a bit misleading. There is no DVD or digital copy included with this release. 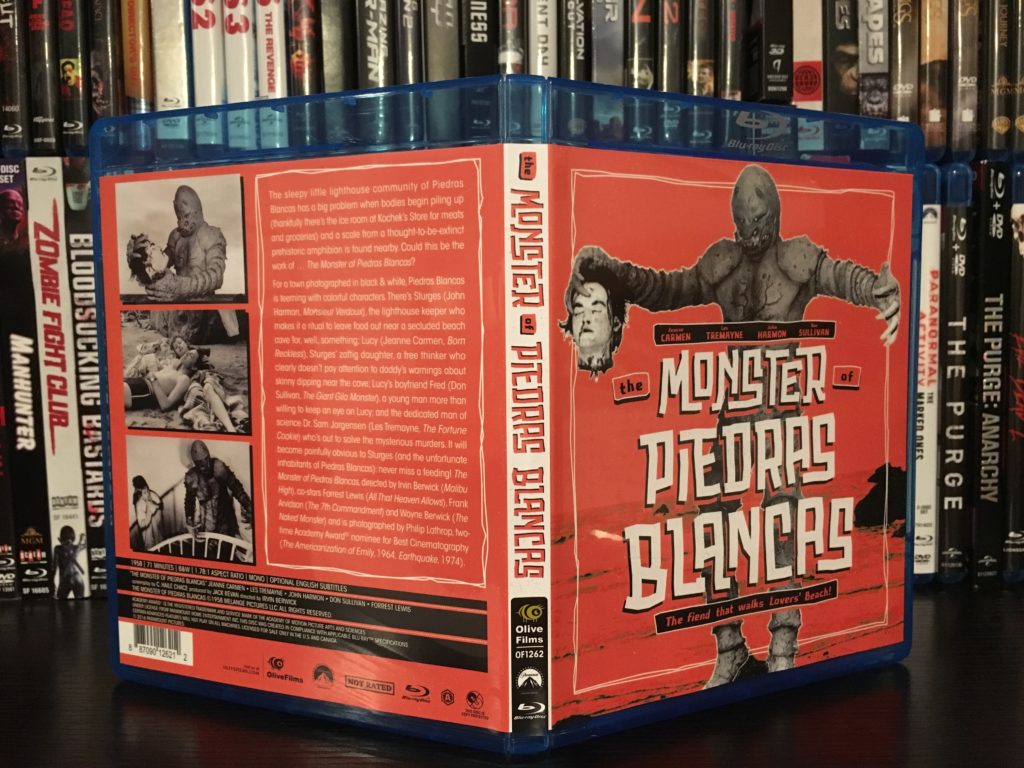 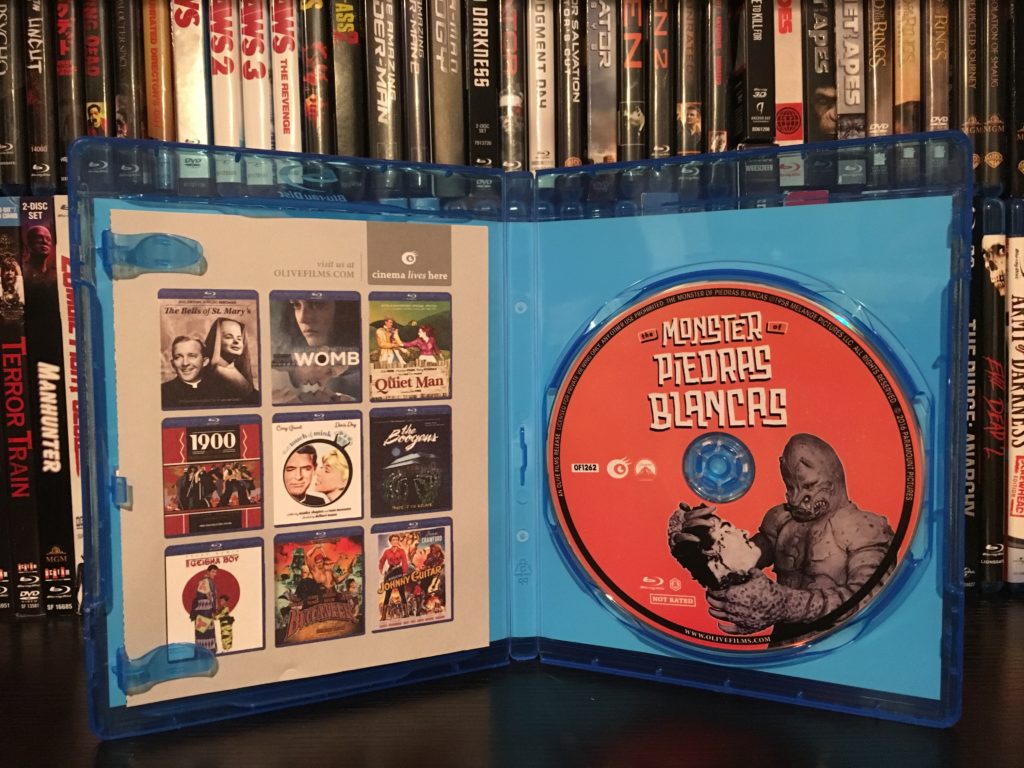 As for special features, they are like the monster from the film: non-existent. Olive Films is usually pretty light on the special features, focusing more on getting out rarely seen films or older catalog titles that need a Blu-ray release, but it is still a bit disappointing.

The Monster of Piedras Blancas is certainly an interesting release, and I am glad to have it in my collection, as I am one of those collectors who considers himself a curator of movies; to collect these obscure films is my duty. However, it would be hard to justify the typical $15ish price tag for an Olive Films release on Piedras Blancas, because of the lack of features and lackluster technical merits. If you can find this one for cheap, I would pick it up for fun, but fans of the genre will likely make this a Day One purchase, and I can’t blame them for that. To the right collector, this is a gold mine of 1950s sci-fi badness. You can find The Monster of Piedras Blancas on Amazon or on the Olive Films website.