Mobile Suit Gundam: Thunderbolt (or otherwise known as Kido Senshi Gandamu Sandaboruto) is a Japanese manga series that was written and illustrated by Yasuo Ohtagaki. The manga itself takes place in the Universal Century timeline during and after the events of Mobile Suit Gundam. An ONA series adaptation was done by Sunrise and was released between December 25, 2015 and April 8, 2016 with a second season of the ONA, adapting the second arc of the manga was released between March 24, 2017 and June 30, 2017.

The film takes place concurrently with Mobile Suit Gundam, during the One Year War. In U.C. 0079, the Earth Federation’s Moore Brotherhood and the Principality of Zeon’s Living Dead Division engage in a fierce battle in the Thunderbolt Sector, a shoal loan that is littered with debris from destroyed space colonies, named for the frequent electrical discharges. Since the outbreak of war, Zeon forces have secured the Thunderbolt Sector, as it is a vital supply route to the A Baoa Qu asteroid fortress. The main story focuses on Federation soldier Io Fleming as he battles Zeon’s best sniper, Daryl Lorenz.

This particular Blu-ray release is the studios theatrical compilation of the first season and was dawned the title of December Sky. It was released in Japanese theaters on June 25, 2016. 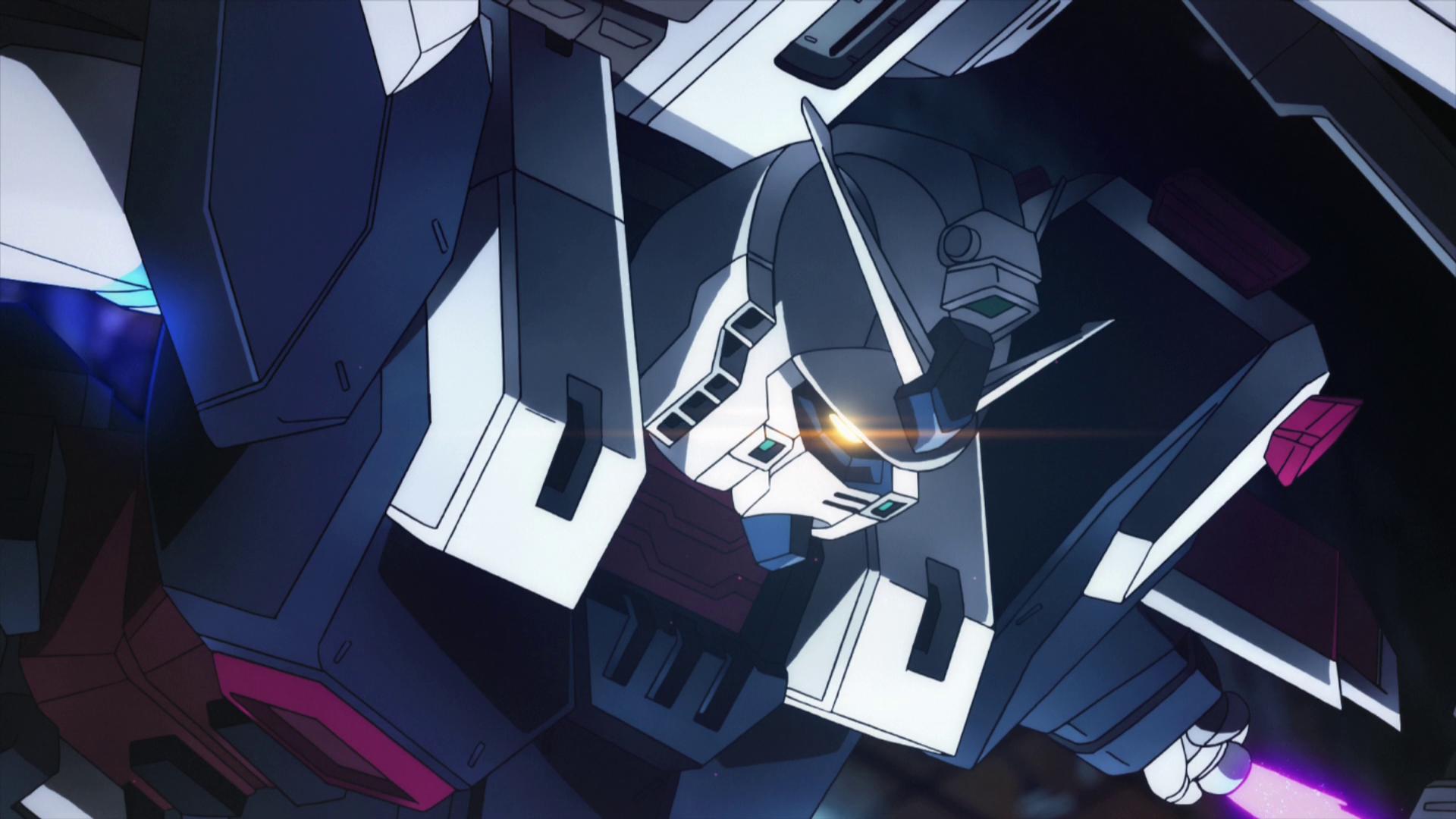 Mobile Suit Gundam: Thunderbolt December Sky really did not disappoint.  As I continue my exploration into the world of the Gundam series, I continue to not be let down as I come across new material.  This particular film had a nice novelization aspect to it as it covered the storyline.  The story had pieces of drama, action and even some comedic values that allowed to be an all encompassing story. 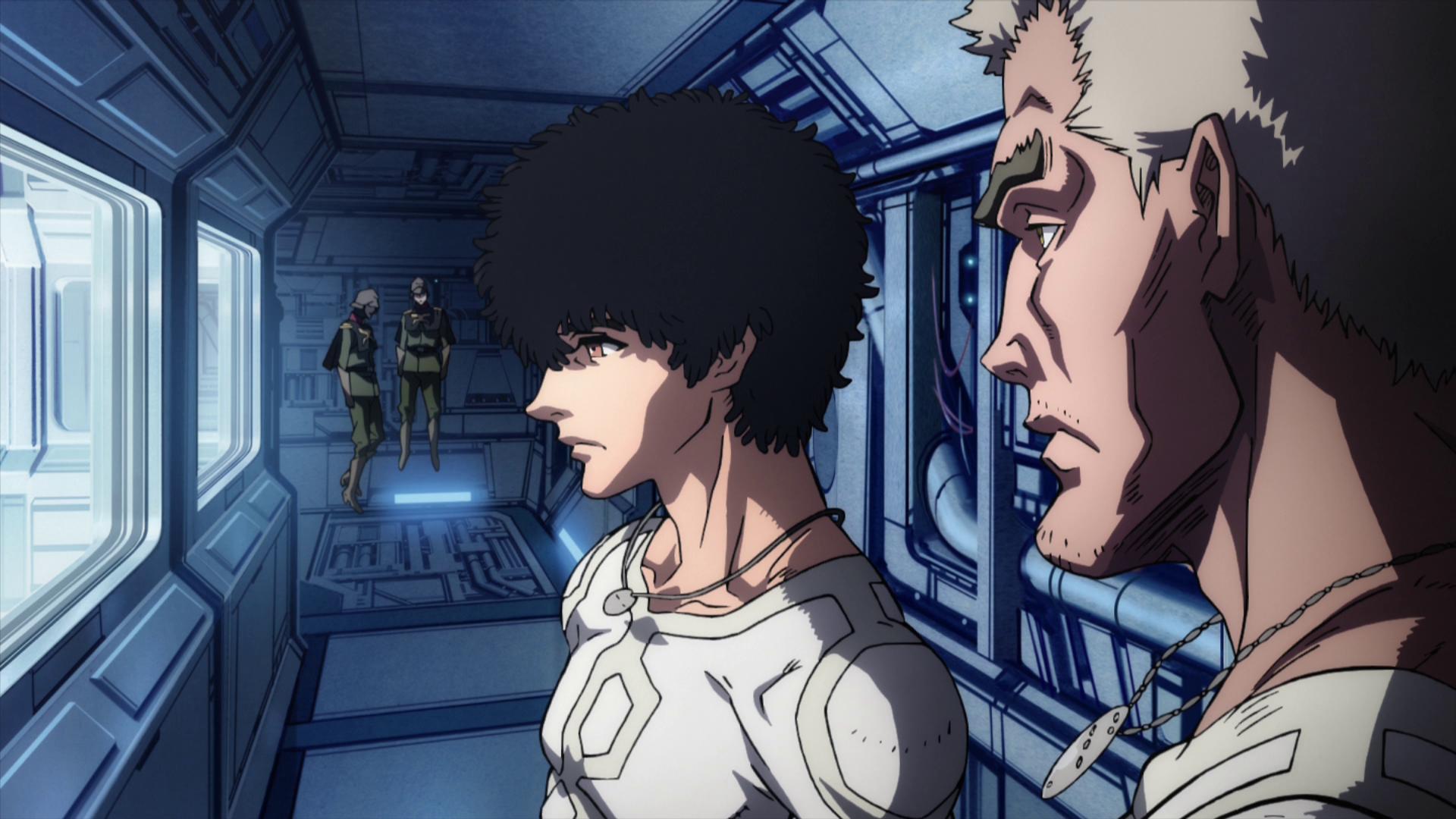 Just as one would expect with an animated feature, Mobile Suit Gundam: Thunderbolt December Sky looked absolutely amazing as it played out on my living room television.  Even with the upconversion of my home theater environment to 4K, the color palette of this release really shined.   Providing a robust colorful experience along with some really sharp lines. 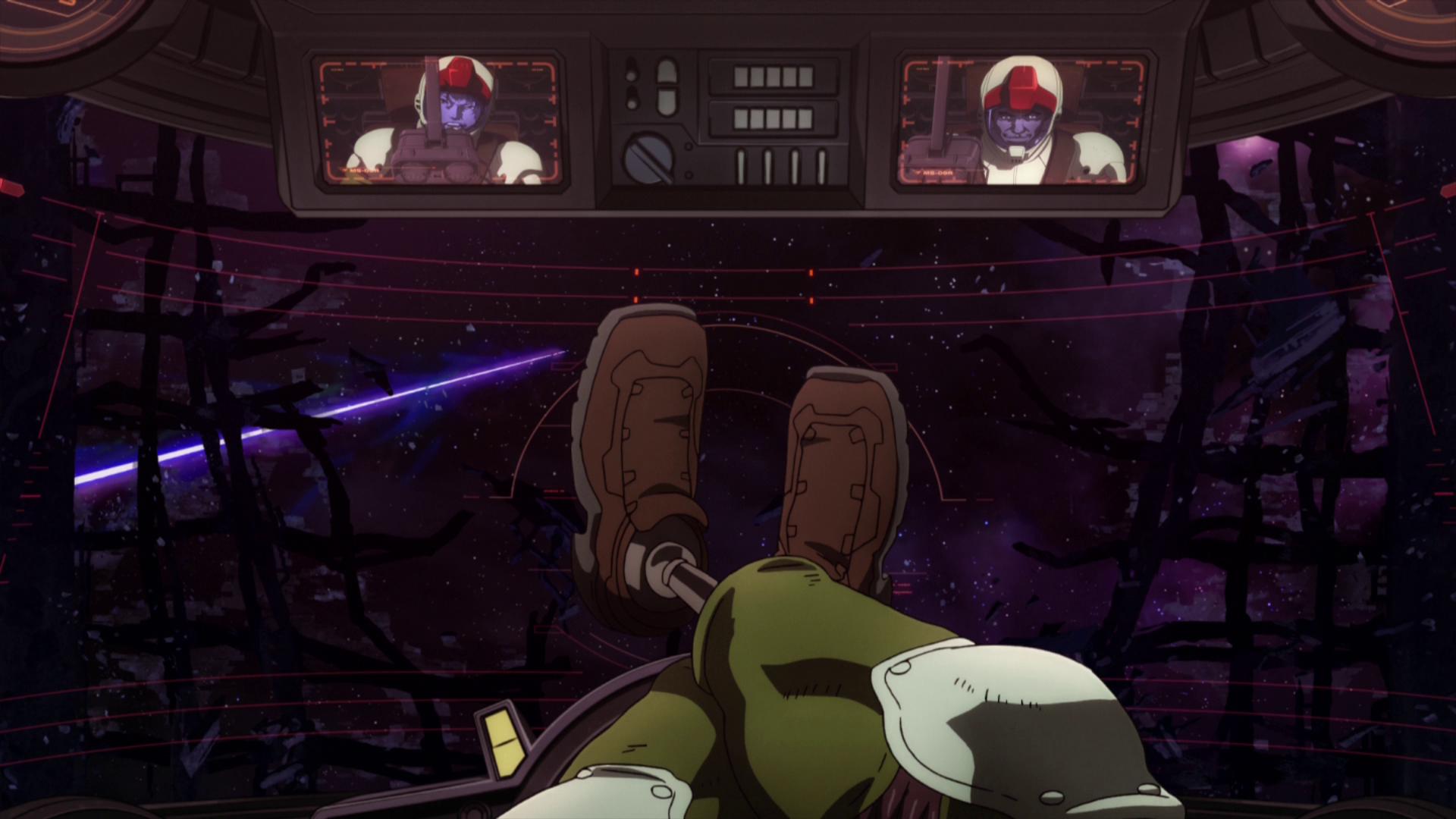 I was genuinely surprised as I put Mobile Suit Gundam: Thunderbolt December Sky as this is the first anime release that I’ve had the pleasure of seeing that contained an English audio track.  Unfortunately, the audio track is an LPCM 2.0 audio track, it doesn’t really offer much of an immersive experience.  However, despite being an LPCM 2.0 audio track, everything about this releases track is presented in a crystal clear fashion that allows you hear everything without having to manually adjust the volume levels as you watch. 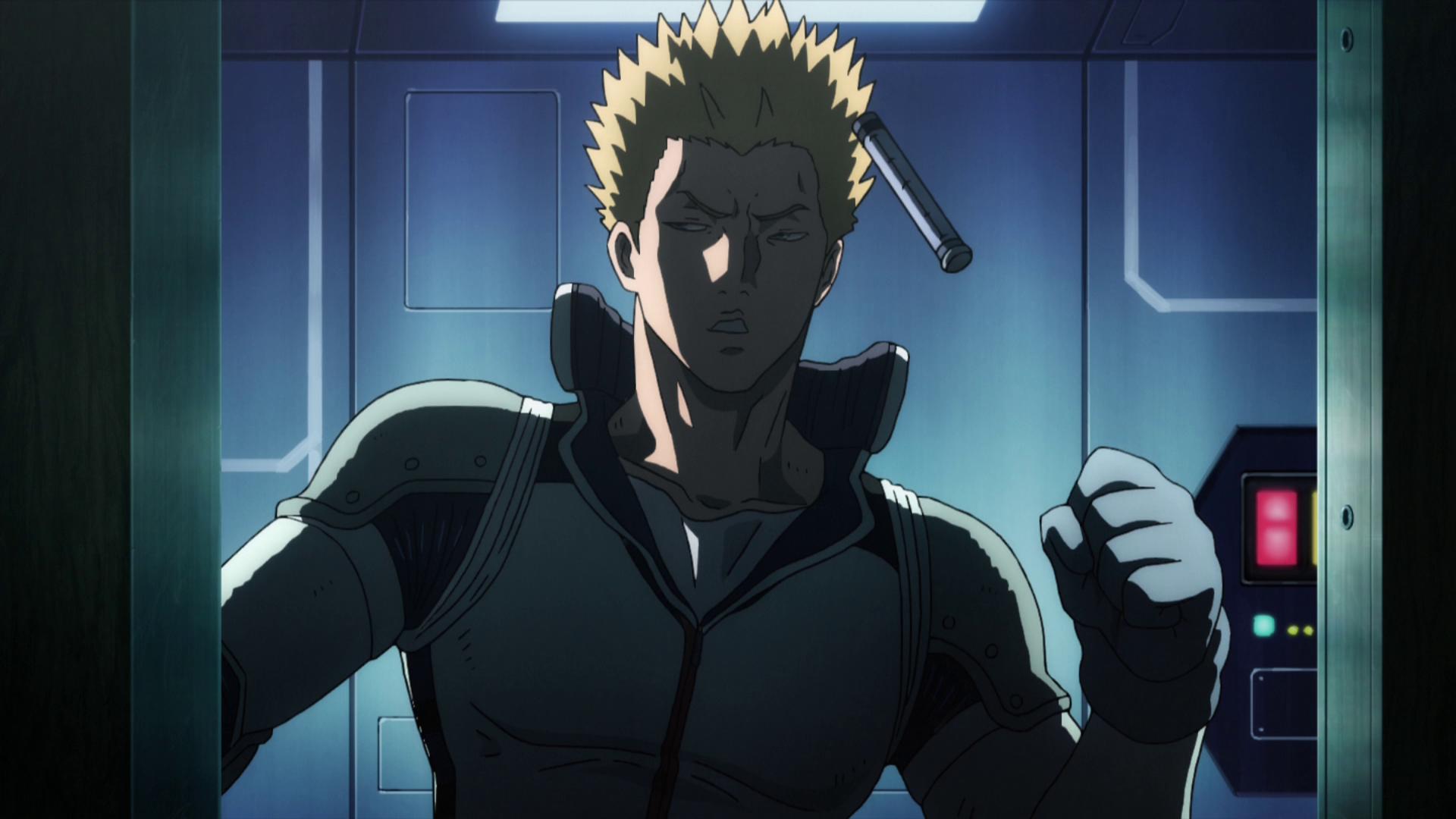 Mobile Suit Gundam: Thunderbolt December Sky comes packaged in your typical single disc amaray Blu-ray case.  Contained within that case is the standard Blu-ray copy of the film.  The disc features artwork that is relative to the film and is similar to that of the case art.  There is no DVD copy of the film nor are there any slipcover available with this release. 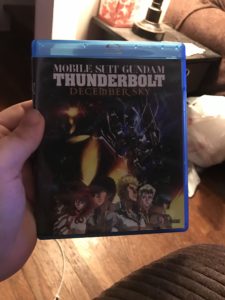 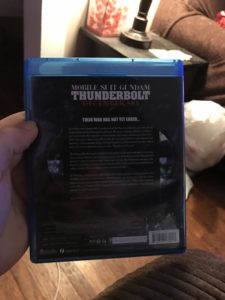 There really isn’t much in terms of additional content available on the Blu-ray release of Mobile Suit Gundam: Thunderbolt December Sky.  In fact, there really isn’t anything that offers a furthered experience into the work that went behind the creation of this animated series.  The only things that’s available with this release is: 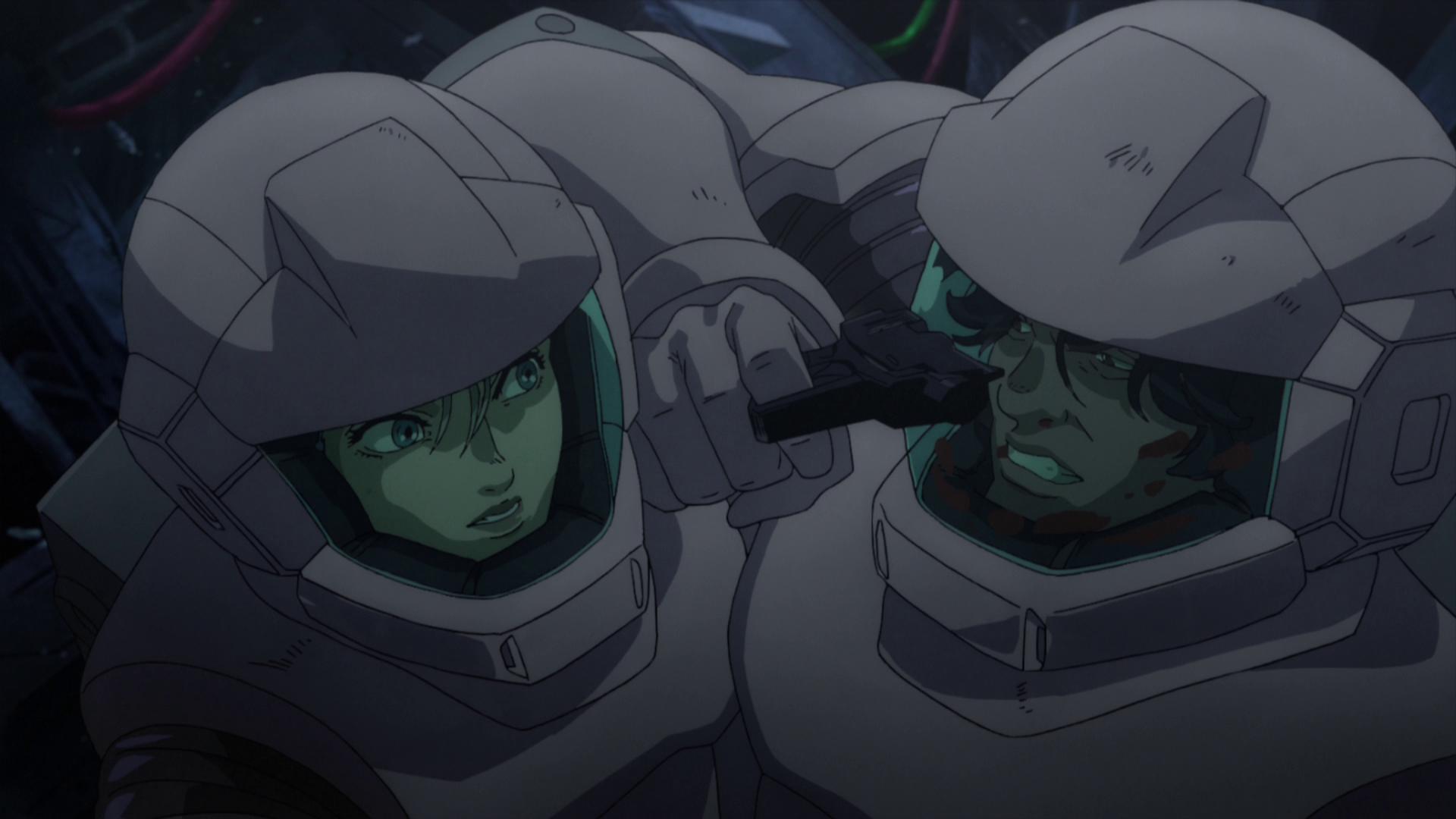 Just with Mobile Suit Gundam: Thunderbolt December Sky, I’ve found this film to be just as enjoyable as I’ve done with my previous experiences.   This particular film felt much more novelized than the ones that I’ve had the pleasure of watching so far, but that isn’t necessarily a bad thing.  The overall visual and audio representation of this release was really well done, even though it does have an LPCM 2.0 audio track.  It was nice to finally have a release that included an English audio track so I didn’t have to read through it as I watched it.

There really isn’t much of anything in terms of additional content on this Blu-ray release; and that’s a little bit of a disappointment.  Packaging is right on par for what I would expect for a release like this.  Overall, I’d definitely recommend picking this release up if you’ve been following the Mobile Suit Gundam series at all.  If you’re looking at grabbing this for your collection, I’d personally recommend grabbing it from RightStuf media; otherwise it is available on Amazon too. 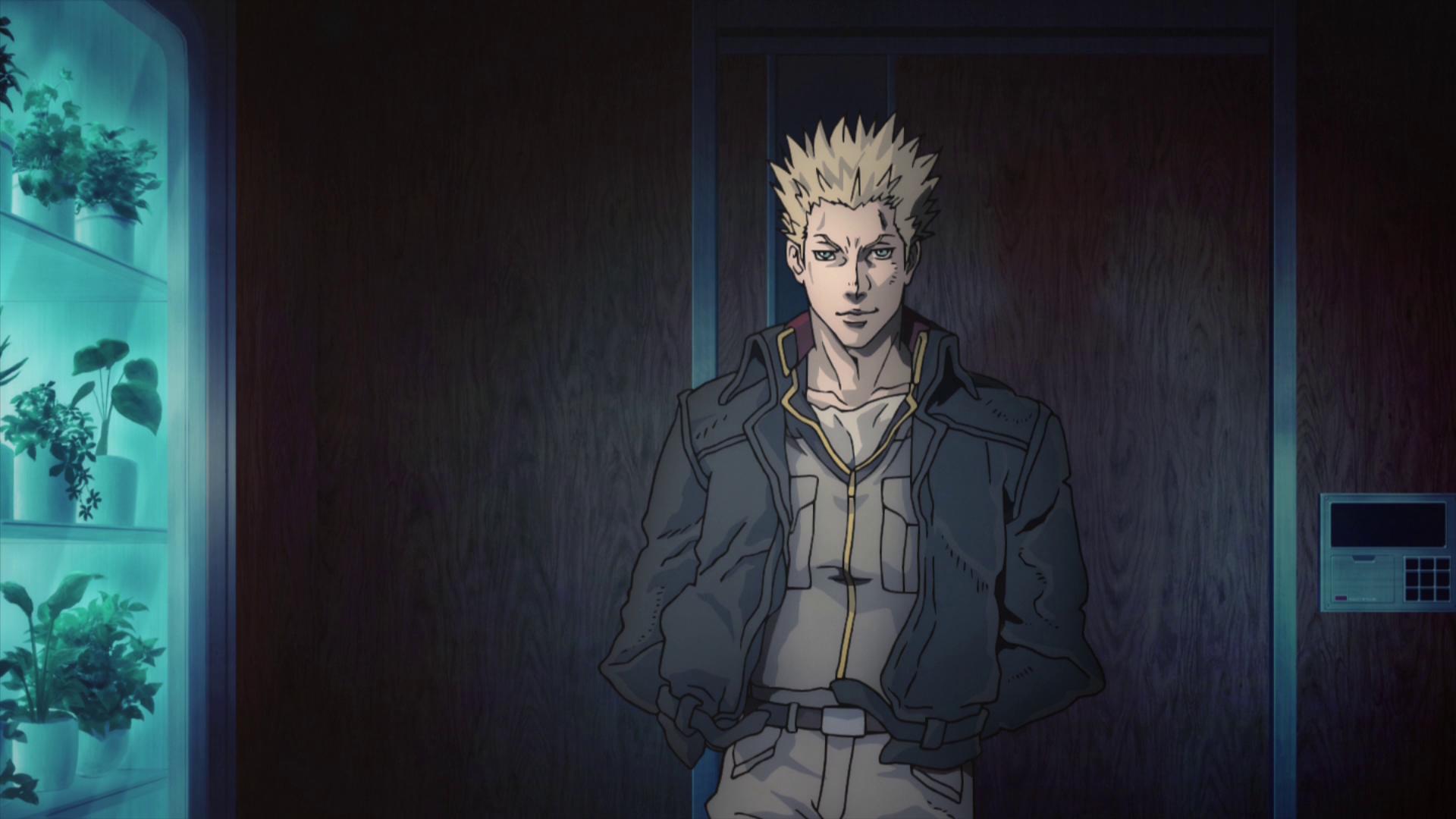