Moana was Walt Disney Animation’s second animated feature in 2016, releasing to theaters in November, roughly seven months after the wild success that Zootopia experienced earlier in the year. Moana tells the story of Moana (Auli’i Cravalho, in her first ever role), who is the daughter of the chief of a prominent Polynesian tribe, living on an island in the Pacific Ocean. Her father believes that no one should travel out into the ocean and past their offshore reef, afraid of what lies beyond. However, when blight hits the island and the crops begin to fail, Moana is forced to take matters into her own hands, following in the footsteps of her ancestors to travel the waters in search of the demigod Maui (Dwayne Johnson), who has the power to save her people and change the course of history. 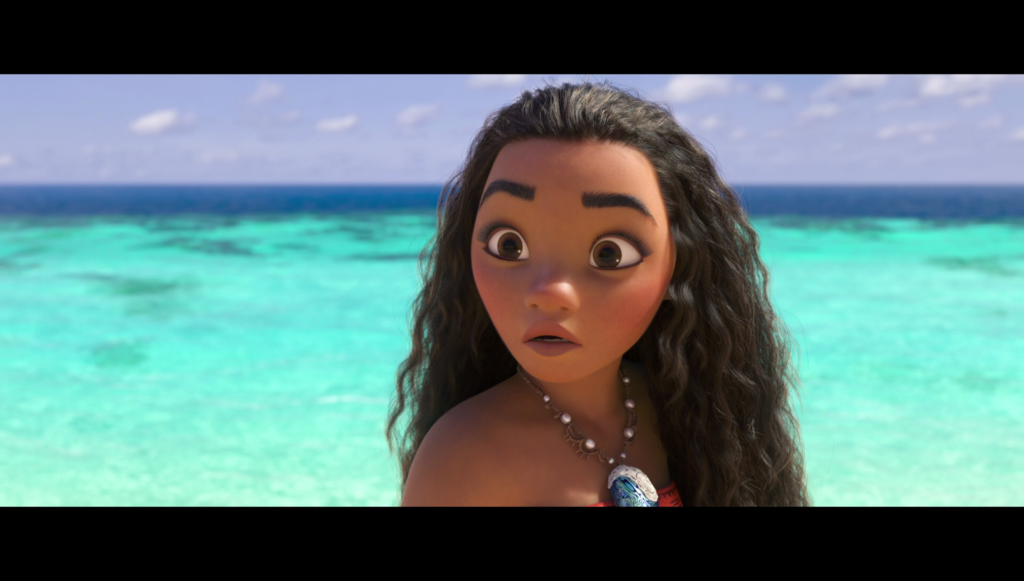 Moana begins with a creation legend from Polynesian culture, and introduces other myths and legends from the Polynesians as the story progresses. The basis of the adventure does stem from this creation myth, while the central part of the story deals with Maui’s past and the relationship between Maui and Moana, which begins as a strained partnership, and eventually develops into something much more meaningful. Disney will pull at your heart strings when the film explores the relationship between Moana and her grandmother, the “island crazy” Tala, but their emotional journey is another major theme of the film and propels Moana’s journey to greatness.

While Zootopia had some heavier themes and seemed to speak to a more adult audience, Moana is a simpler film, but more enjoyable and entertaining as a whole. Zootopia may have taken home the Oscar for Best Animated film for various reasons, but Moana is a gorgeous entry to the Disney canon that will be tons of fun for children of any age. It makes for a great family film, the animation is incredibly vibrant and well-done, and the music is incredible. Lin-Manuel Miranda of Hamilton fame led on the film’s musical team, writing songs and producing the performances, and his expertise shows, as Moana has one of the best soundtracks of any Disney film in recent years.

A nice side-note and interesting tidbit about Moana is that it does feature a majority Polynesian cast, where most every voice artist has at least some Polynesian background, and it adds to the authenticity of the performances. From Dwayne Johnson and former NFL star Troy Polamalu, to Cravalho and Temuera Morrison, the rich Polynesian history and pride can be experienced in all of their excellent performances. Cravalho is especially great in the title role, and Dwayne Johnson clearly has a future in animation, as his voice over work was top notch. Moana is yet another enjoyable entry from the team at Disney Animation, who continue their recent resurgence to once again challenge Pixar as the best animation studio around.

The Video (5/5)
Say what you want about Disney’s slow transition into the 4K space, but when they put out a product like Moana, it is clear that 4K likely won’t have much of an impact on animated films. This was simply one of the best looking Blu-rays, 4K included, that I have ever seen. The colors of the ocean and the islands, all in different shades of blues and greens, are magnificent, looking more realistic than any animated film from my memory; The Little Mermaid would bow in shame at the way that Moana handles the ocean environments. Reds and oranges from the volcanic fires and the black and white of the night skies, full of stars, are also major highlights. I do not even believe that HDR would have helped much with these visuals, as they are perfectly rendered with vibrant color all over the screen. I am afraid that the dimming effects of HDR would detract from the overall experience, and so I am glad 4K was not an option here. 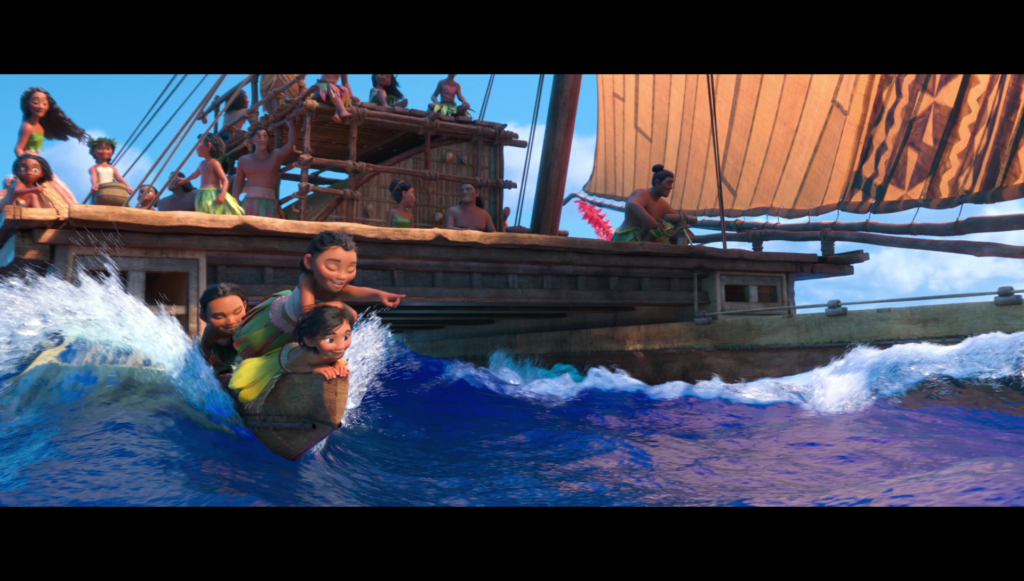 Trust me when I say that there is not a better looking film on any format that has been released so far this year, and if you have a newer TV that handles color very well, Moana will be an absolute treat to watch. One interesting tidbit on the animation is that the film is not actually 100% digitally drawn, as hand-drawn animation was used for Maui’s moving tribal tattoos in a cool throwback to the Disney animators of past. In fact, there hasn’t been any hand drawn animation whatsoever in any Disney film since Winnie the Pooh in 2011. This isn’t easily seen on screen, but for animation fanatics, I thought it was interesting enough to note, as Disney and Pixar have nearly gone fully digital with their work over the past two decades.

The Audio (4.5/5)
While there is no Dolby Atmos or DTS:X audio track included here, there is a very well-done DTS-HD Master Audio 7.1 track that handles the soundstage well and delivers a booming performance. The musical numbers sound excellent, and the roar of the ocean rips across all seven speakers, creating a truly immersive experience. Fine details like the pecking of Moana’s pet chicken, or the slightest splash of water hitting the boat, are well presented and get their fair share even in the near constant audio of larger effects or musical numbers. I do recommend a full surround sound system for this release, as you will surely miss out on much of the experience without it. Music always sounds better on more speakers, and so to do the soundtrack justice, make sure you have at least a 5.1. 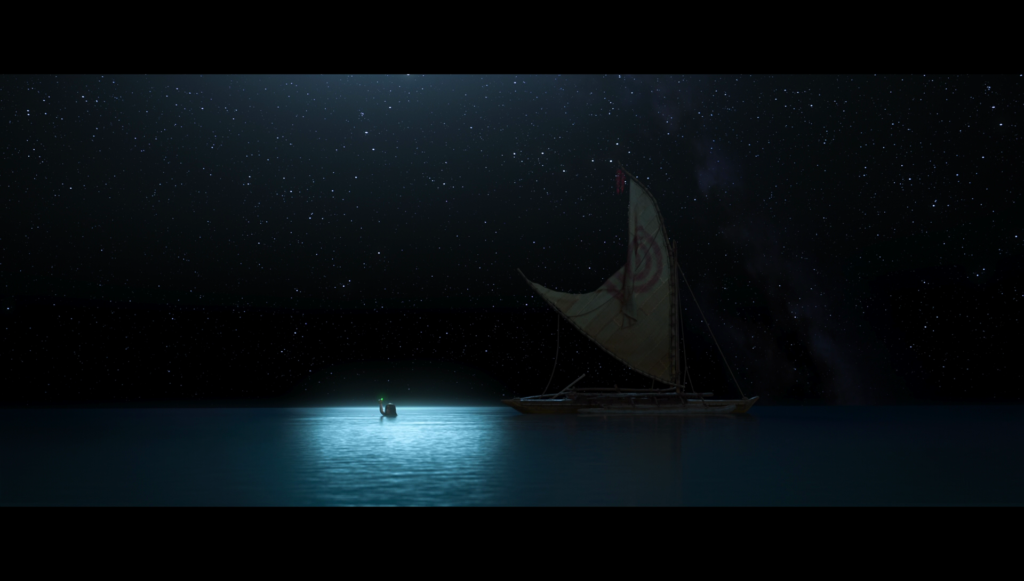 Subwoofer action is strong, especially in the stormy ocean scenes, or in the few fight scenes scattered throughout the story. My favorite moments of audio featured the booming sounds of the Polynesian Gods who Moana and Maui encounter along their journey, as the subwoofer action truly added some depth to these massive characters. As always, I do recommend checking out SVS Sound and their lineup of speakers, as nearly one year after upgrading my system to a 5.1.2 with their components, I still have nothing but good things to say about the way they perform, and my PB-2000 subwoofer really packed a serious punch and made this a noteworthy audio experience.

As with most Disney releases, collectors do have a few options when looking to pick up Moana, including a couple of retailer exclusives. For basic packaging, there is both a standard Blu-ray/DVD/Digital HD combo pack, as well as a 3D Blu-ray/DVD/Digital HD Collector’s Edition, which both come with their own unique slipcover, although other than the 3D copy and differing artwork, they are the same. 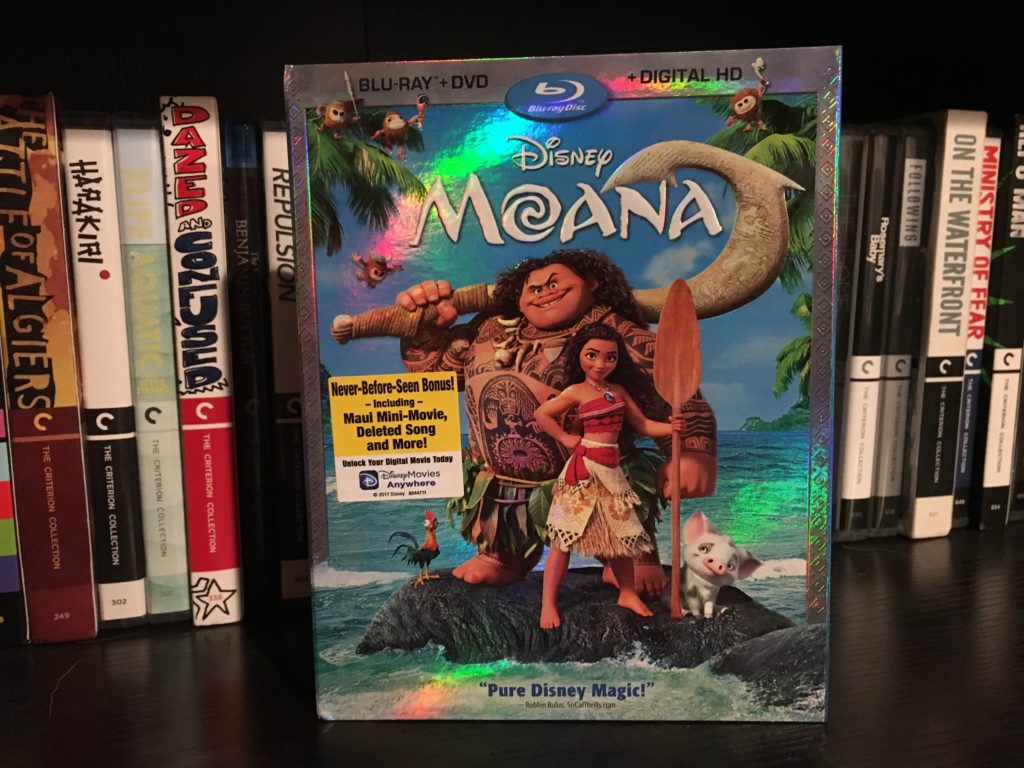 At Target, you can get a storybook version of the Blu-ray, which contains a 32 page booklet along with the same discs as the standard release. 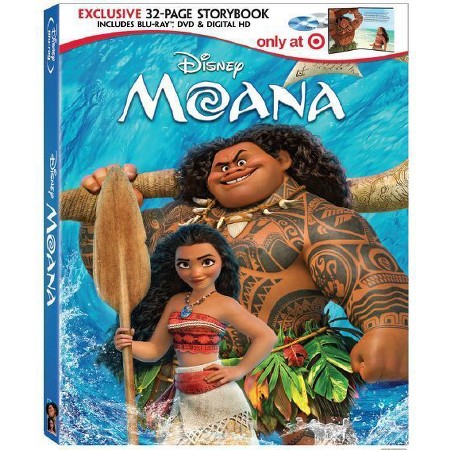 Best Buy is featuring a steelbook for both the standard Blu-ray and the 3D release, which both have the same artwork, but are nonetheless very cool. For those in the UK, Zavvi is carrying the same steelbook that is featured at Best Buy. 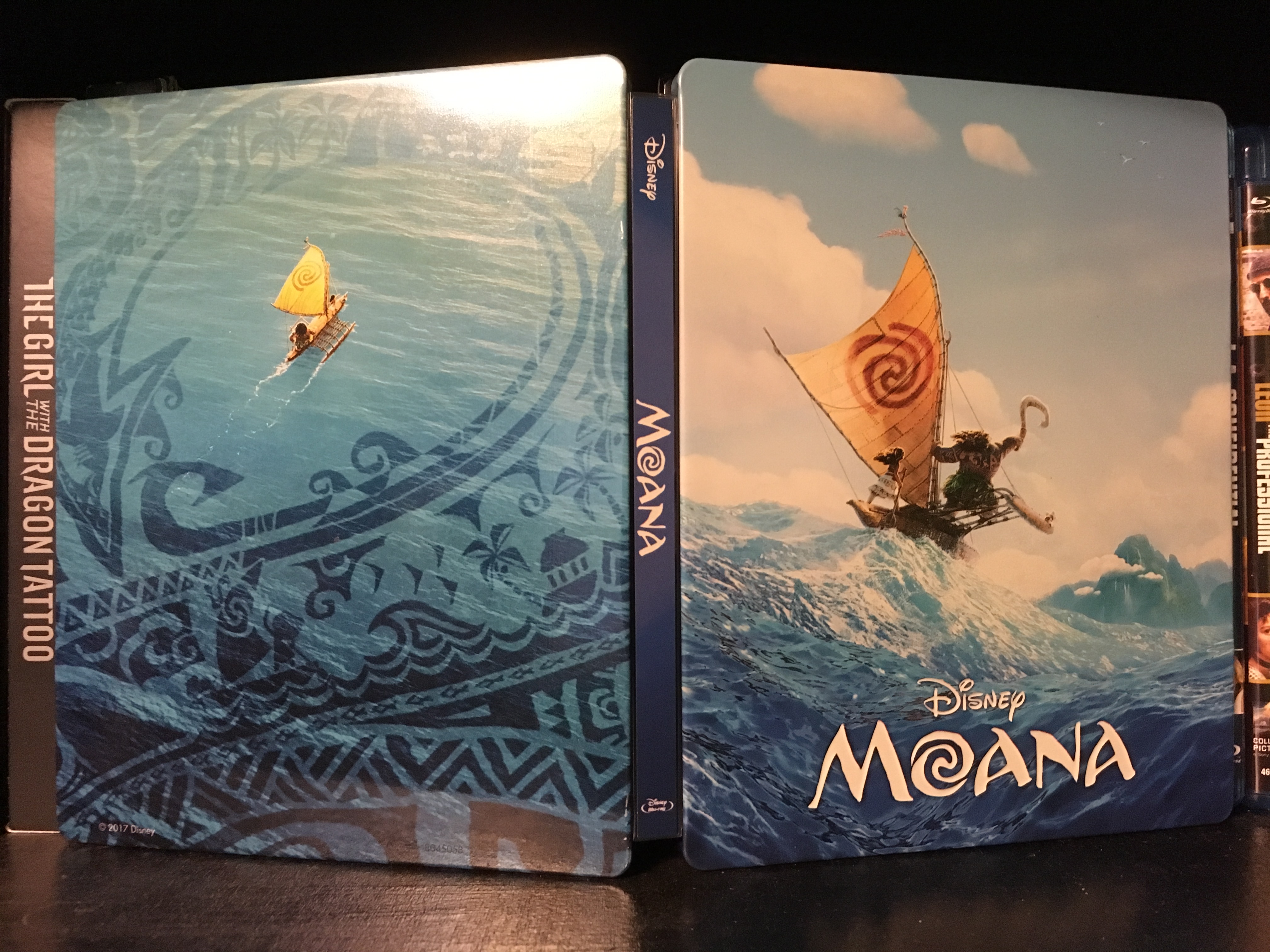 As for features, they remain the same across all of these releases, and Moana is packed with them. The best way to break them down is to give you a full list, as follows: 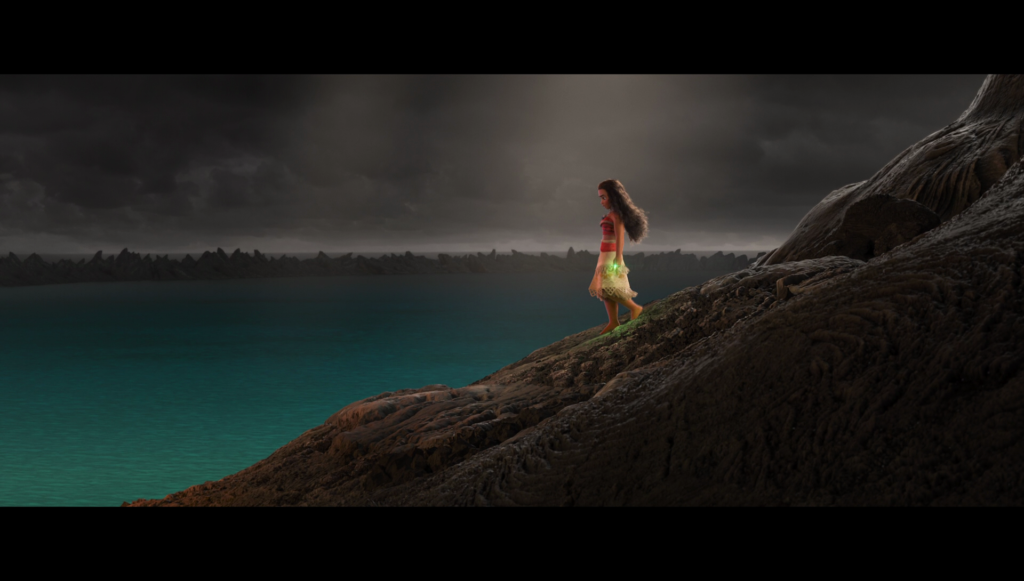 Moana is Disney at their finest, and this is probably their most vibrant and most exciting animated film in some time. The Polynesian culture is well-represented by the cast and by the animators, and the environments look absolutely stunning on Blu-ray. The audio is well presented, and although it lacks in comparison to the reference quality visuals, it is excellent on its own merits. Also, the loads of special features are an excellent example of why Disney is still the standard when it comes to home media release. 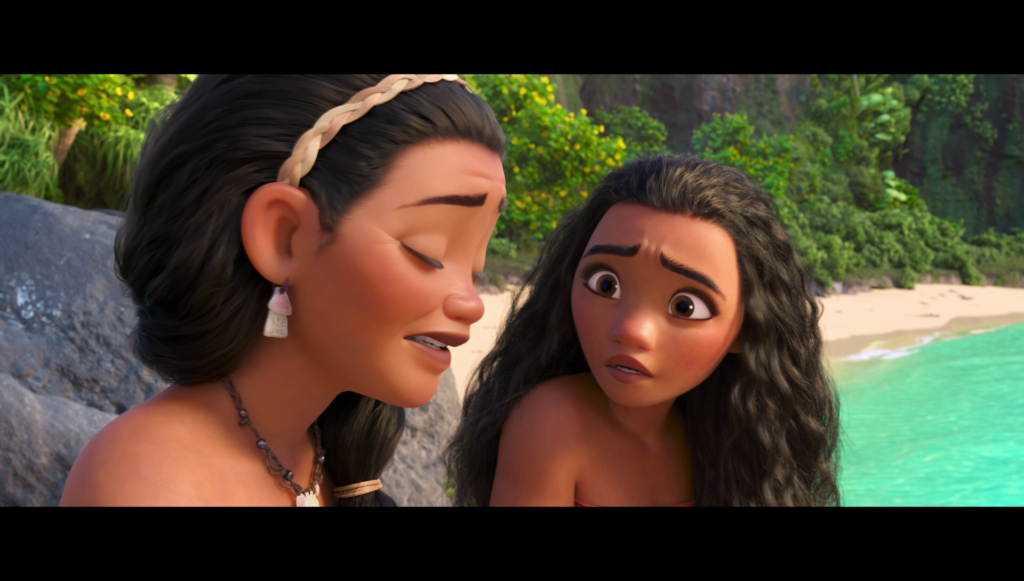 Target and Best Buy are giving collectors plenty of options to purchase this release, the audio/visual merits are as strong as any release so far in 2017, and the film is an enjoyable experience, making Moana a must-buy Blu-ray release. Personally, I prefer the standard artwork to the Target storybook or the Best Buy steelbook, but make your own decisions based on your personal preferences as a collector. Either way, you can’t go wrong with any version of Moana on Blu-ray, and it will certainly end up on some end of year lists as a top release from just about every standpoint.