Tom Cruise is an enigma.  On the one hand we have movies from him like The Firm, A Few Good Men, Born on the fourth of July, and Eyes Wide Shut then on the other hand we have films like Top Gun, Days of Thunder, and Jerry Maguire.  It seems we have two different actors on our hands with a career spanning decades and such an erratic difference in film choices.  The one thing that seems to connect all those years? Ethan Hunt and the Mission Impossible Franchise. Which brings us to the brand new release of Mission Impossible: Rogue Nation.

Following the events of Mission Impossible: Ghost Protocol, Ethan Hunt is back with a brand new mission.  This time possibly facing  his most sophisticated adversary yet, The Syndicate. The Syndicate is an organization that has been acting under the radar to control the outcome of major world events, an Anti- IMF (Impossible Mission Force) we are told.  This time we are promised bigger stunts,better action, and surprisingly the movie delivers on both.  The film opens with Hunt (Cruise) boarding the side of the plane and, in a very real sense, finds himself stuck clinging for his life as the plane takes off.  As the movie progresses, we find that the IMF is in jeopardy of being shut down once and for all if Hunt can’t find a way to bring the syndicate to light.  Teamed with a few familiar faces, Hunt battles the impossible tasks that lay before him. 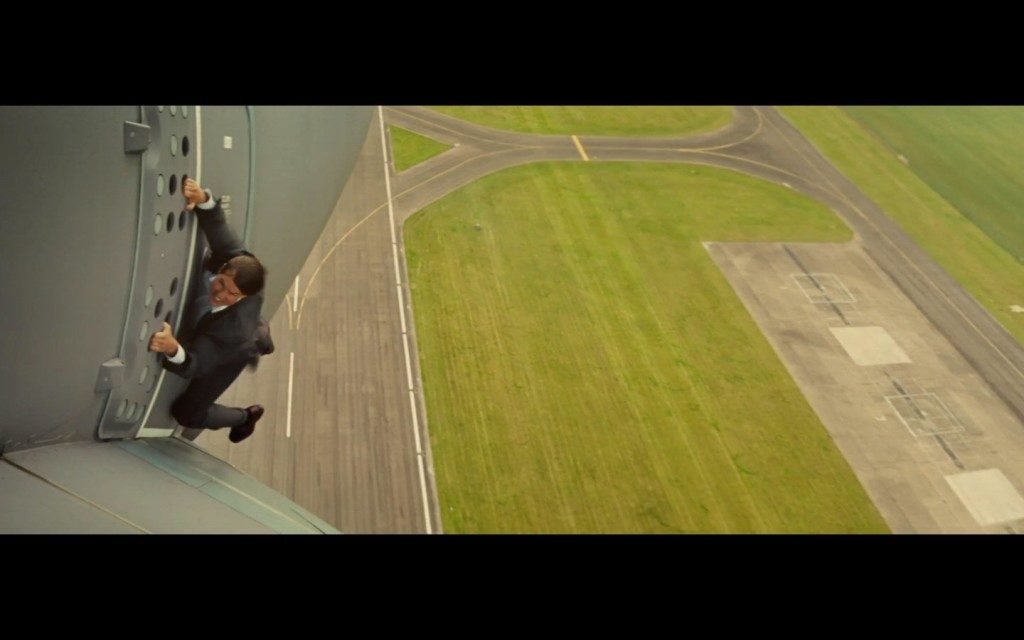 Much of the film was shot anamorphically on 35mm film giving the film, at some times, an old school grainy texture. Certain scenes of the movie involve a lot of technically complicated visual effects.  more than a few times digital background was added for necessity.  The underwater scene was shot particularly well using an Alexa 65 with underwater housing.  The cinematography keeps the film feeling fresh while still being reminiscent of the original Mission Impossible.  This Movie looks great it takes advantage of some old and new tricks of filming making an unforgettable combination. 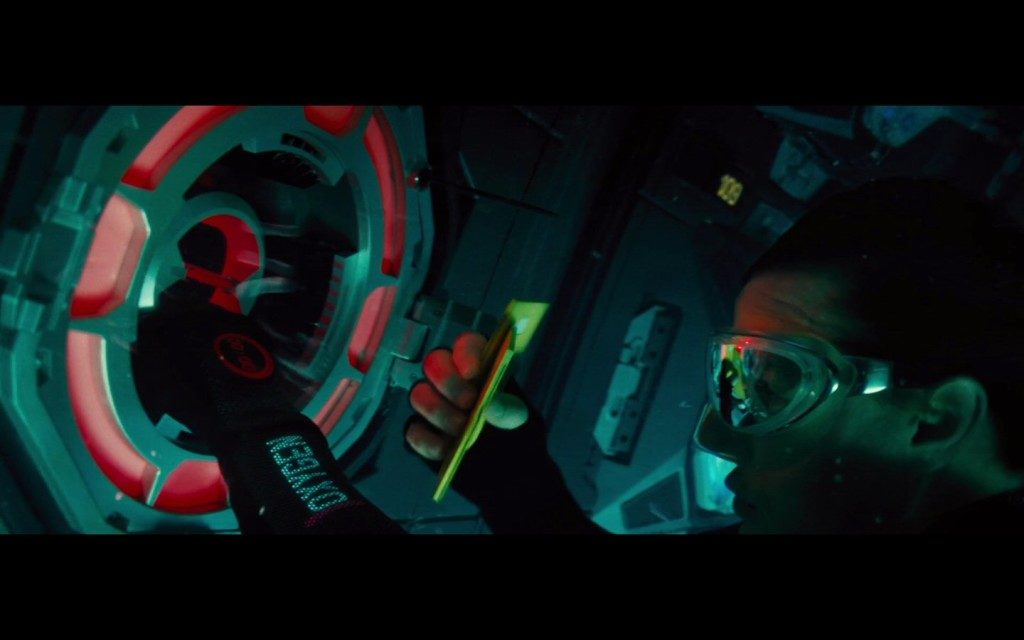 This is one of those movies you will want to crank all the way up and ignore the soft pounding of your next door neighbors asking you to turn it down.  This movie has a ton of action and does not quit.  The movie was mixed very well.  I was worried that I would end up stuck glued to the remote; however, I was pleasantly surprised when that turned out to not be the case. There are a lot of key moments in which the sound is intentionally used to take the story to the next level keeping the audience well immersed. 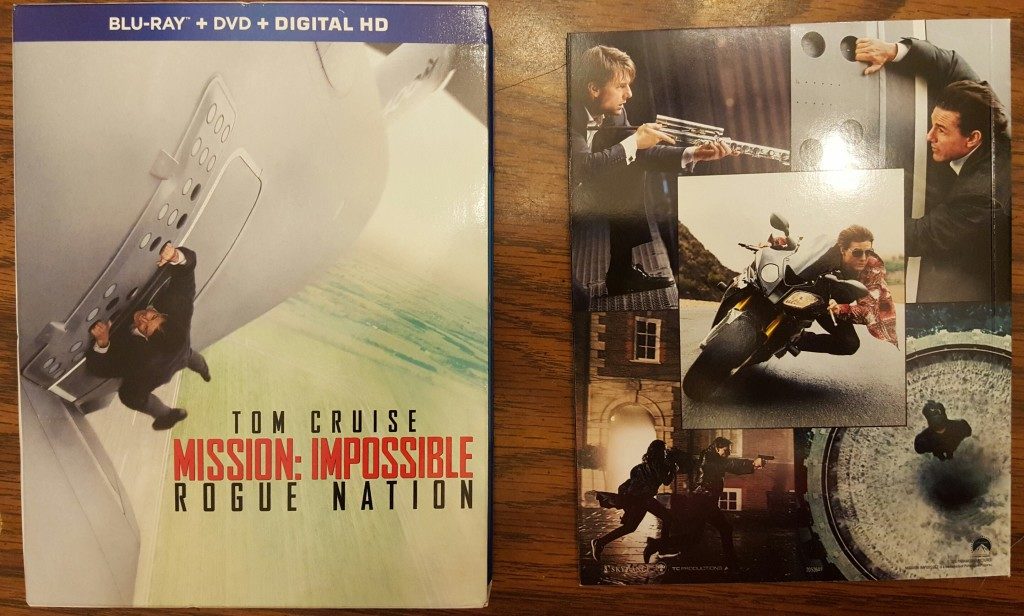 The packaging for this edition is pretty simple, nothing we have not seen before.  What is pretty amazing about this edition is the booklet.  The “Impossible Stunts Edition” includes a 48 page booklet including original set photos, storyboards, and production images.  The booklet is made with a high quality high gloss paper that is quite impressive.  The images pop in such an incredible way, I assure the pictures do not do them justice.  The only negative comment I have is that it was impossible to find an edition not ruined by the “spider” anti-theft device they use at Target to secure these. 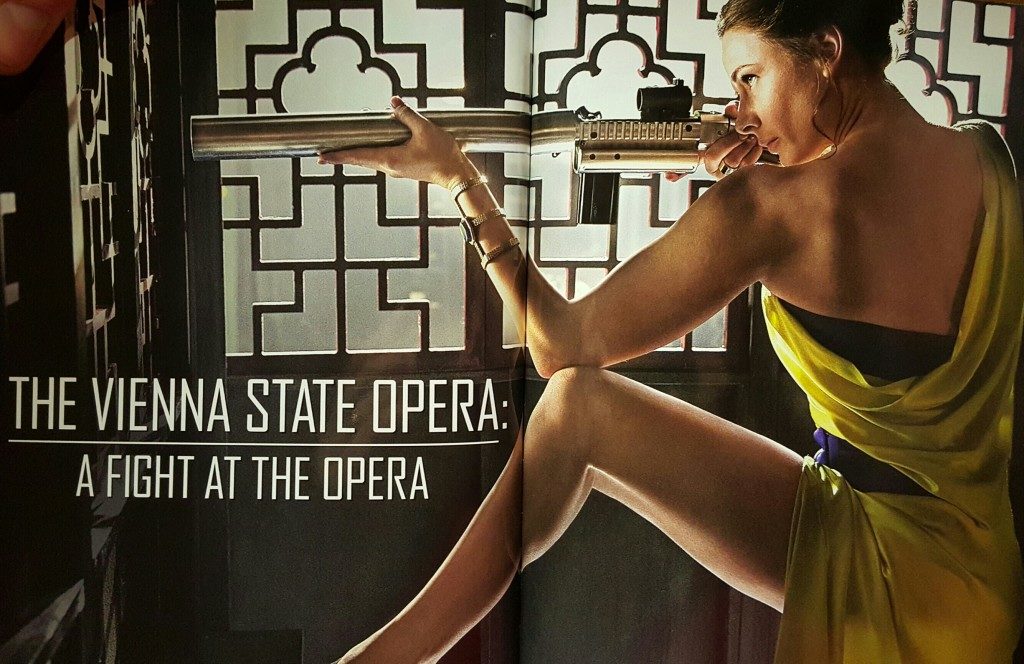 The edition offers a massive 90 minutes of special features on a bonus disc all of which I highly recommend. The Special Features are as follows:

By all accounts this is a good movie.  It is more than enjoyable from start to finish. The amount of effort that each and every member of the cast went through to deliver the film to the absolute highest quality possible is inspiring.  Tom Cruise has decided that these movies deserve his entire heart and the result is truly amazing.  I will admit that I thought the whole “over the top stunts” bit was a cheap way to keep people coming back. However after watching the 90 minutes of Bonus Features my perception has changed, there is clearly a passion there that even I do not understand.  This film was specifically designed for the fans and it delivered on all accounts and that is something that not many films, even the greats, can boast.