Tim Burton might be the most consistent filmmaker currently working in the Hollywood studio system. And by that, I don’t necessarily mean that he’s one of the best in terms of quality, but a lot of his post-2000 work has shared an aesthetic that seems uniquely his; dark, but not in a gritty way, more like a teenager applying too much eye shadow kind of way, but infused with a sense of visual creativity that allows each of his films to share the same foundation, but still come out in a way that we can somehow tell them apart. Occasionally he’ll break out of his comfort zone, with films like Big Fish, or…..Big Eyes, but ever since the release of 1999’s Sleepy Hollow, he’s kind of stayed in this adolescent emo kind of phase. Miss Peregrine’s Home for Peculiar Children, released to theaters this past fall by 20th Century Fox, is the next major entry into that phase, finding Burton behind the camera for yet another big budget young adult novel adaptation.

Miss Peregrine’s Home for Peculiar Children drops us in the middle of the life of Abe Portman, a teenager who feels out of place and misunderstood by everyone except his Grandpa, who spent his whole life sharing wondrous stories with him about a foster home for children with unique powers after he was forced to flee Poland to escape the Nazis. Shortly after the ball gets rolling, Abe is forced to face the death of his Grandpa, and slowly retreats inwards as he grieves the loss of his closest relative. Unsure of how to deal with him, and faced with little time to dwell on his recovery, his Dad takes him on a trip to Wales, so that he can visit the home his Grandpa always told him about. Once there, he accidentally steps into a time portal of sorts back to 1943, where he discovers that his grandfather was right all along, and that he is the only one that can help save Miss Peregrine and her peculiar children from destruction at the hands of a dangerous monster. Oh and the big bad monster guy also has a group of invisible monsters at his beck and call. Fun, right? 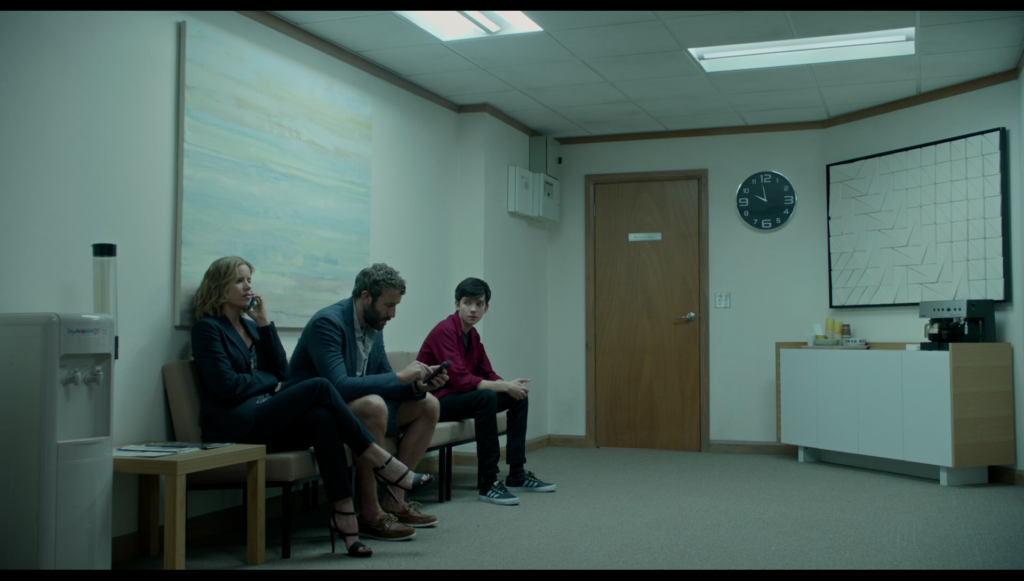 I know that plot summary is pretty rough, but I fear that trying to capture the convoluted nature of what story this film tries to tell in a single paragraph is pretty rough. This is an incredibly busy movie, in which Burton and his team attempt to establish a brand new fictional world from the ground up, complete with time travel twists, gifted children who possess all sorts of powers from emitting intense heat to being full of bees, all sorts of lore and emotion and even a hint of romance. Then, once all of that has been lined up, they still have to find room to pit the good guys against the bad guys, which falls flat and kind of tanks the narrative. It seems like the start of a perfectly good season of television, but poorly condensed into a single, two hour movie. 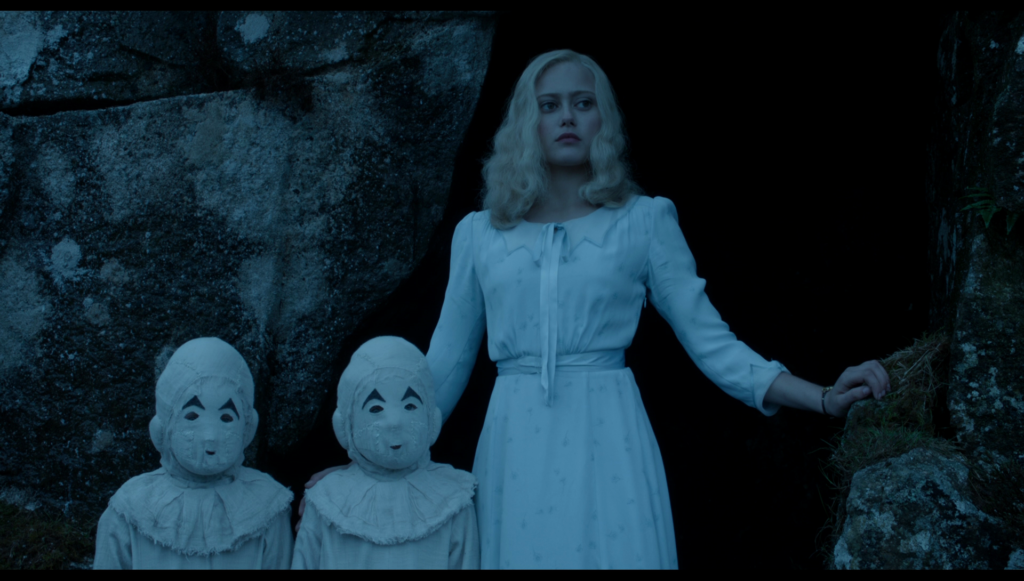 I give Burton a lot of credit for trying to scramble and get everything together into a working movie. He and his team nailed the casting for the good guys – Eva Green is perfect as the sharp but loving caregiver for the Peculiar Children, and Asa Butterfield fits comfortably into the role of a disgruntled teenager, accurately portraying the emotional turmoil that is associated with the loss of a loved one early on in the film. The Peculiars are played by an ensemble that takes the material in stride, but there’s so many of them and really only one of them is given any depth or interesting material to work with, that they all sort of just quirk their way through their roles. Unfortunately, his choice of villain, Samuel L. Jackson, plays out surprisingly poorly, as he chews scenery like a meat grinder in the worst kinds of ways, and is given a really weak amount of context and accompanying screen time to develop any real sort of presence on screen. Everyone else in the movie just kind of fills screen time, contributing little to the main storyline. 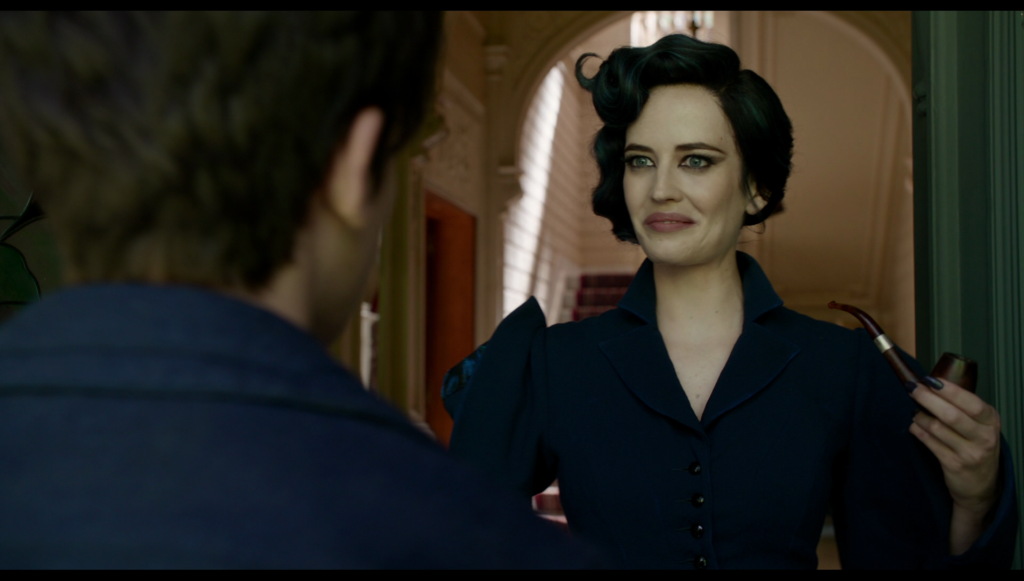 Everything else falls together in typical Burton style; visually, the film is cold, but interesting, with lots of colors, incredibly bust set design, and cool visual effects sequences that really sell you on the abilities of the Peculiars, with a sequence involving the lifting of a sunk steam ship out of the ocean impressing in particular.  The music fits nicely with the overall aesthetic of the film, but is otherwise unmemorable. 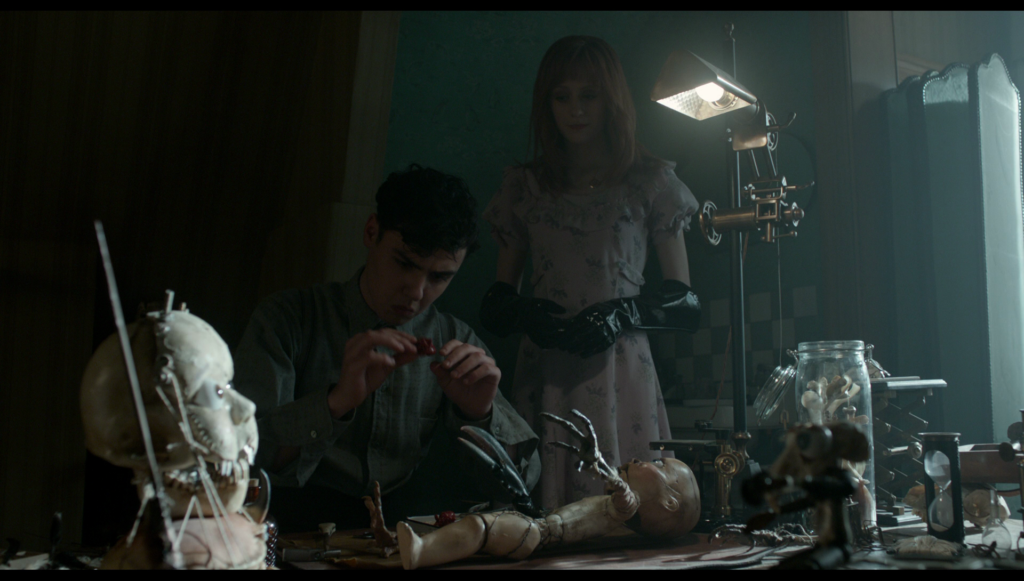 What I’m trying to say underneath all this rambling is this; there are cool moments to be had in Miss Peregrine’s Home for Peculiar Children, but so much of the movie is bogged down in world building that by the time the credits roll, you’ve been forced to sit through the climax equivalent of a wet noodle that doesn’t really give anyone interesting to do. It isn’t bad, it isn’t particularly good, and it feels like a pretty brittle springboard for a larger franchise, which cripples the movie.

Miss Peregrine’s Home for Peculiar Children was shot using the Arri Alexa XT camera in 2.8K resolution mode using Cooke spherical lenses according to IMDB. It was then color timed and mastered in upscaled 4K resolution for the flat 1.85:1 aspect ratio. 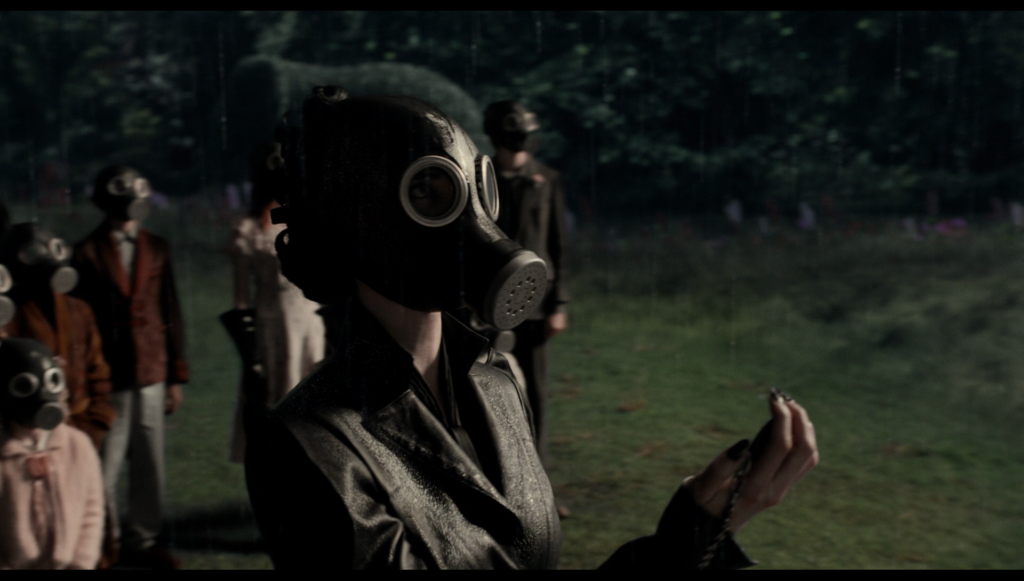 The Blu-ray is presented in 1080p, maintaining the 1.85:1 aspect ratio. Miss Peregrine is kind of a drab movie, awash in cold greys, brown, blues, and greens that don’t exactly make for an eye-catching experience. For the most part, the 1080p presentation of the film is sharp, and detail is good, especially in mid and close-up shots, revealing excellent facial detail and the efforts the team went through to create such unique and contrasting costumes for the main characters. Sometimes however, there was an overall air of softness, especially when the main villain’s evil creatures begin to appear on screen. The CGI almost looks downright hilarious as a result, next to the sharp live action footage they’ve been composited into. There is little to no visual noise to report. Overall, it’s a fairly average digital video presentation. 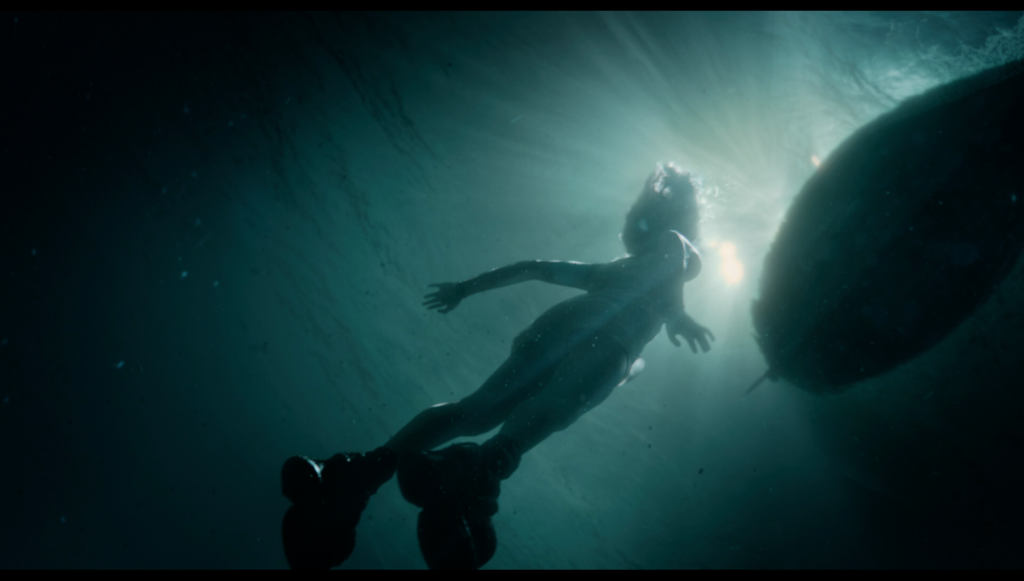 The 4K Ultra HD Blu-ray is presented in 2160p, maintaining the 1.85:1 aspect ratio, and the original resolution as seen in theaters capable of playing the 4K 2D DCP. Honestly, watching Miss Peregrine in 4K was an eye opening experience; the blacks are so incredibly rich and lifelike, that it makes the standard Blu-ray look like you’ve turned the brightness way up on your television. Detail is superb, but maybe only a hair better than your standard Blu-ray, and drabness of the movie is almost exaggerated a touch. It gives the movie a much truer to life viewing experience, one in which dark rooms actually look like what’d you’d see in poorly lit rooms in real life. It’s almost like looking into a window. Other colors receive a shift towards a more grounded presentation as well; the finale does a great job of showing just how far we’ve come in terms of making the overcast weather of England actually look and feel like these kids are fighting evil monsters under a gloomy, cloudy sky. The 4K resolution makes the live action footage even sharper, but unfortunately the problematic CGI looks  even softer and less convincing. Other than that, this 4K presentation looks incredible in my books.

The Blu-ray features a DTS-Master Audio 7.1 track as it’s main audio presentation, while the 4K UHD Blu-ray utilizes a Dolby Atmos track. For review purposes, both soundtracks were listened to in standard 5.1 configuration, hence the single review for both tracks, as they’re essentially equal in presentation quality. 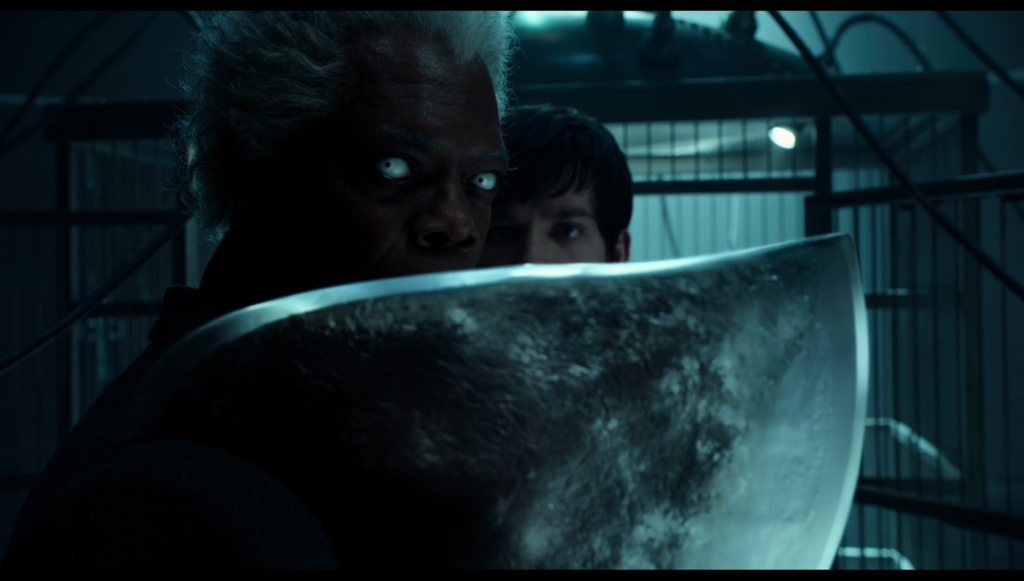 Miss Peregrine’s Home for Peculiar Children has a surprisingly effective surround sound presentation when it’s allowed to stretch its legs. For the most part, sound is locked to the front spread, with dialogue locked to the center channel and the left and right reserved for the occasional sound effect or piece of score, but during the busier scenes, such as the bar fight scene, the raising of the ocean liner, or the fight during the climax, the soundscape lights up. Surround activity kicks in to help immerse you in the action on screen, and subwoofer activity is excellent at augmenting the mayhem taking place on screen. When the movie isn’t just a bunch of kids chatting about in a dark house, it becomes a fun, exciting presentation. Unfortunately, that happens fairly infrequently.

Miss Peregrine’s Home for Peculiar Children has been released to home video by 20th Century Fox Home Entertainment in a standard black 4K Ultra HD Blu-ray case with an accompanying slipcover. The case and slipcover feature identical artwork, with the front featuring Eva Green as Miss Peregrine front and center, with the various Peculiars behind her displaying their talents with their house in the background. The back of the slipcover features a few pictures of the characters of the film from key moments in the film, a paragraph about the film, and a large banner towards the bottom that details the features included, and the merits of the 4K format. The case itself features only one of those pictures, an abbreviated paragraph about the film, the same large banner of features and 4K info, technical specs, and credits. Overall, the package is fairly colorful and interesting, and makes for a good looking 4K release. 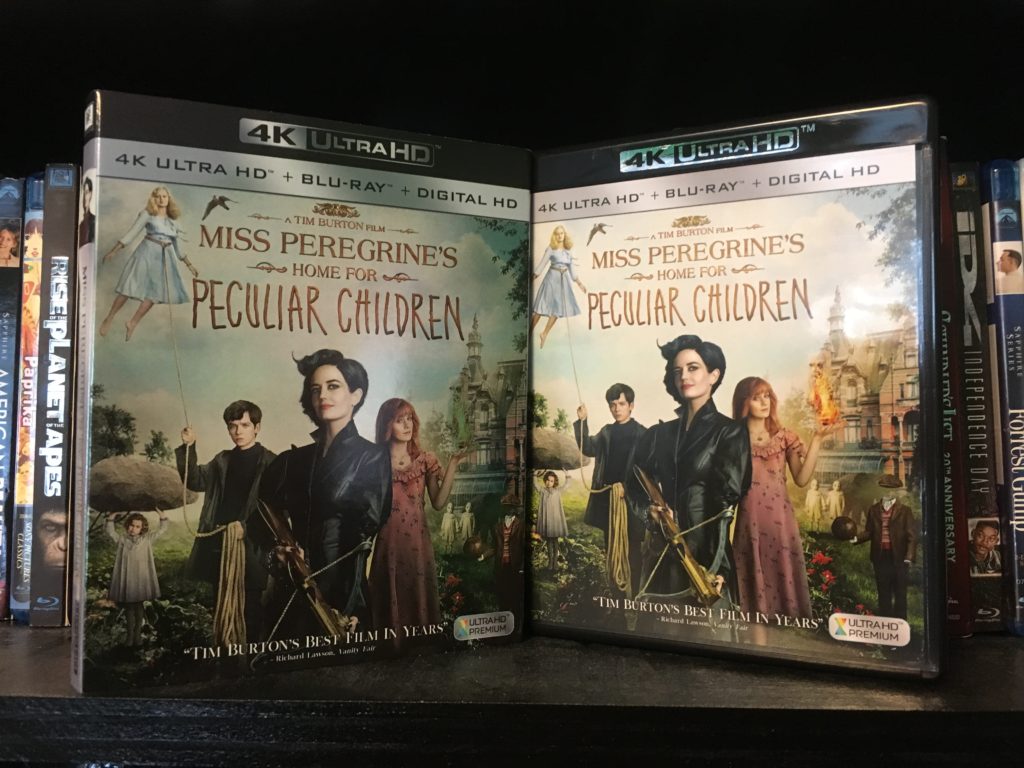 The 4K disc has no extras.

The Peculiar Story – a 12 minute feature that explores the making of the film, and how the story came to be through the eyes of Tim Burton, members of the crew, and the book’s author, Ransom Riggs.

The Peculiars – an hour long feature that explores the design of each one of the main characters, their personalities, powers, and their costume designs in depth with the production teams and the actors.

Hollows and Ex-Hollows – a 9 minute piece that explores the creation of the villain characters in the film, and Sam Jackson’s performance in the film as the Baron character. 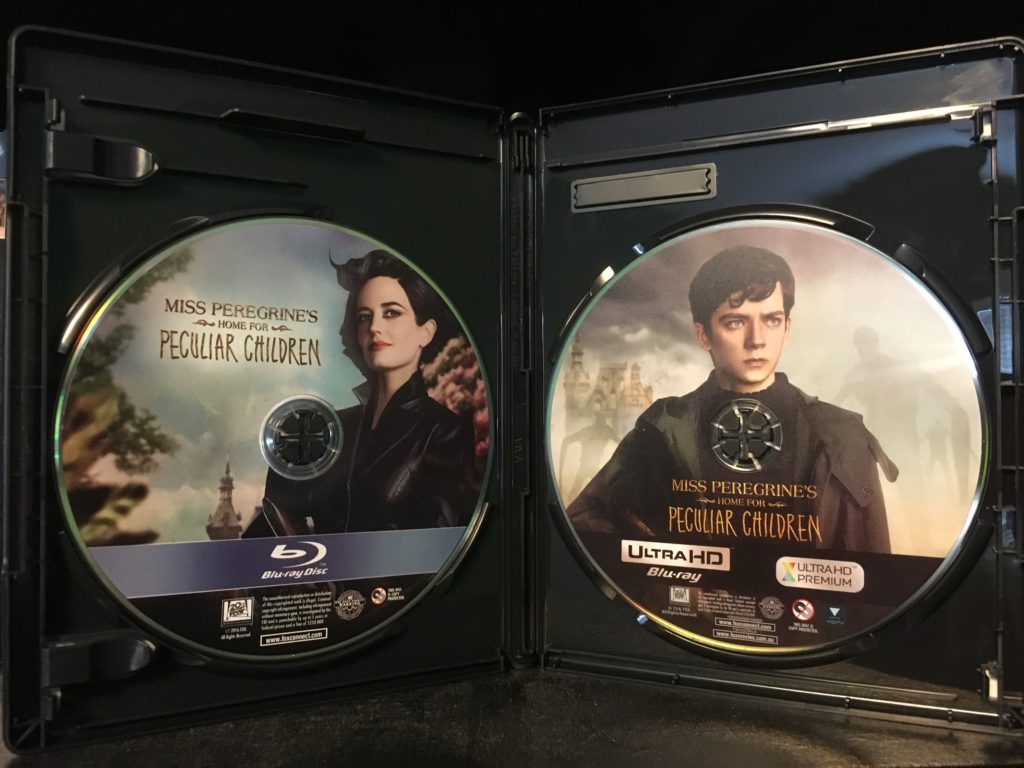 Map of Days – a 17 minute piece, broken into multiple pieces that explores the settings of the film, as well as the time travel concept that drives the film, and some of the design work that was put into the visual effects for the movie.

Music Video – a music video for the song, “Wish That You Were Here,” performed by Florence + The Machine.

Gallery – a collection of pre-production sketches by Tim Burton, as well as photographs from the set of the film.

All in all, there’s a sizeable collection of extras for fans of the film that do an excellent job of exploring the creation of the film. The lack of 4K extras is unfortunate, but easy to overlook in this case. Packaging is quite nice as well. Overall, this release does a decent job in this particular area. 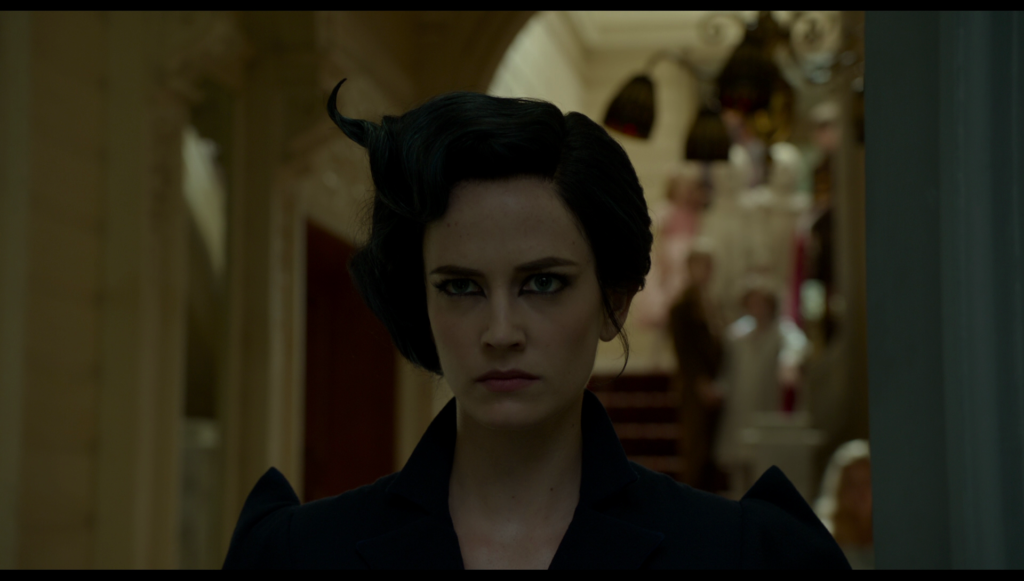 Miss Peregrine’s Home for Peculiar Children is a series of cool concepts and visual ideas that doesn’t really make for a very interesting conflict driven narrative. It spends so much time explaining everything, and focuses so heavily on effective world building that by the time it tries to wedge a bad guy and any sort of tension into the mix of things, it just falls apart due to a somewhat over the top performance by the usually excellent Samuel L. Jackson, and a lack of focus that drives the tension and build up into 20 minutes of rushed excitement. Regardless of its quality as a movie however, it comes to home video with a spectacular 4K HDR-enhance video presentation, an excellent 1080p video transfer, and a pair of great audio tracks to bring the story to the screen. On top of that, it features a healthy serving of extras, and great packaging to make it a worthy purchase for both fans of the film, and 4K enthusiasts across the board.