The Movie (4/5)
Midnight Special is a strange case. Released in a limited form of release in March of this past year, it failed to really make much of an impact. In an era where sci-fi blockbusters and comic book movies reign supreme, Warner’s decision to release a smaller budgeted sci-fi film without any huge star names against the initial summer blockbusters was a bit of a head scratcher. Even with a bit of positive buzz behind it, the movie fizzled out of theaters, making less than half its budget back in box office grosses, and I can totally see why.

Midnight Special, directed by Jeff Nichols, is a movie I can only describe as a father-son story, but also at the same time an homage to Spielberg films such as E.T. and Close Encounters of the Third Kind. Except this time the son is the Close Encounter. 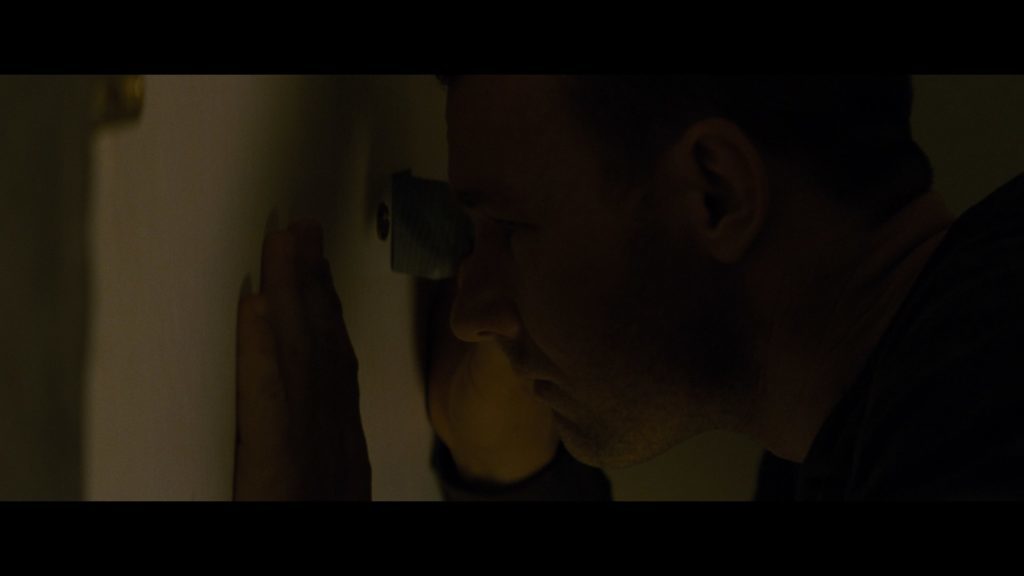 The film follows the story of estranged Roy Tomlin, played by Michael Shannon, as he attempts to keep his son, played by Jaden Lieberher, who has displayed supernatural powers, from the clutches of a twisted cult that has held him up as their voice of god. At the same time, he’s being chased by government agents, as the messages he’s relayed to the cult have been embedded with government secrets. Enlisting the help of his childhood friend Lucas, played by character actor Joel Edgerton, Roy must do everything he can to save his son from the clutches of both the government and the church, as they strive to figure out just exactly what Roy’s son actually is. 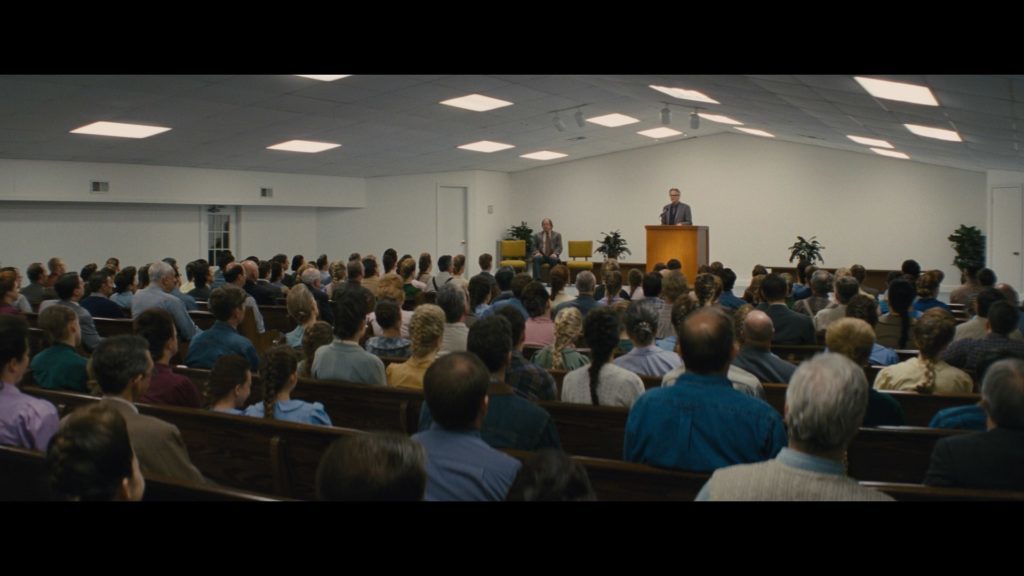 This of course, results in what is essentially an elaborate chase film, but under the direction of Nichols, it becomes something really special. Unlike your typical high speed chase film, Midnight Special moves incredibly slow, and uses minimal dialogue to convey most of the plot of the film. It instead relies on an incredibly dark visual style, and quiet, brooding score and sound design to create a tense, intriguing tone that runs throughout the film. For the most part, this works incredibly well, painting the film in a layer of ambiguity and mystery, but sometimes it just comes off as a bit too dark at times – when I saw it in theaters, there were times when I struggled to figure out just what was going on in a few shots. 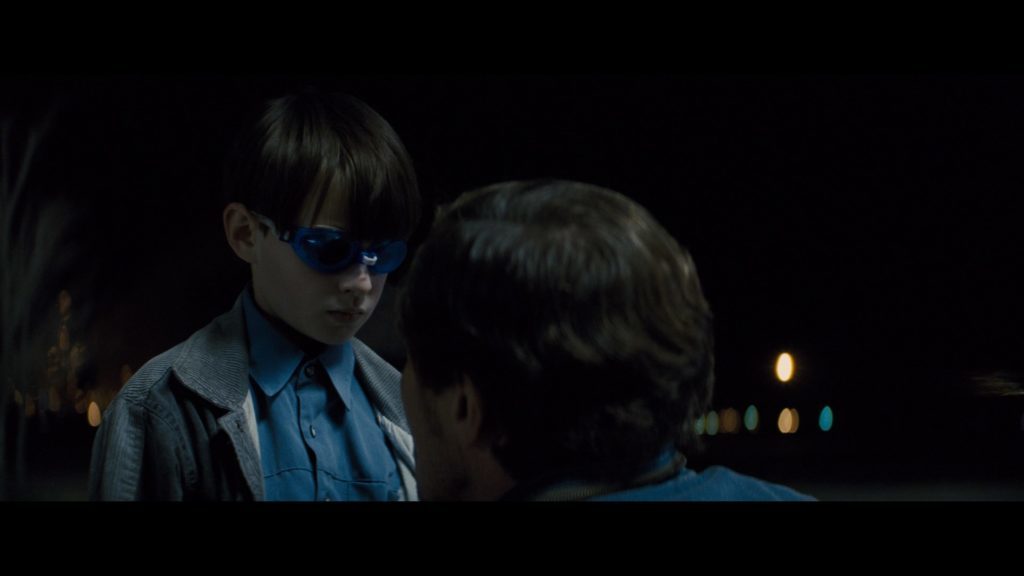 The film slowly builds to a crescendo in a very similar manner to Close Encounters of the Third Kind, as our cast of characters races towards a location that Roy’s son has set, racing towards the unknown. As they get closer and closer, more exciting things occur, and action picks up, building to a climax. Unfortunately, once the film hits its climax, it trips on its way down the hill. Nichols and his team try to create a fascinating, satisfying conclusion, but instead of a bang, it goes out with a whimper. The script just kind of runs out of ideas, and becomes convoluted, trying too hard to explain the mystery behind Roy’s son’s abilities. It plays all of its cards, something that Spielberg recognized as he recut Close Encounters, realizing that some things are best left up to the audience to ponder on. 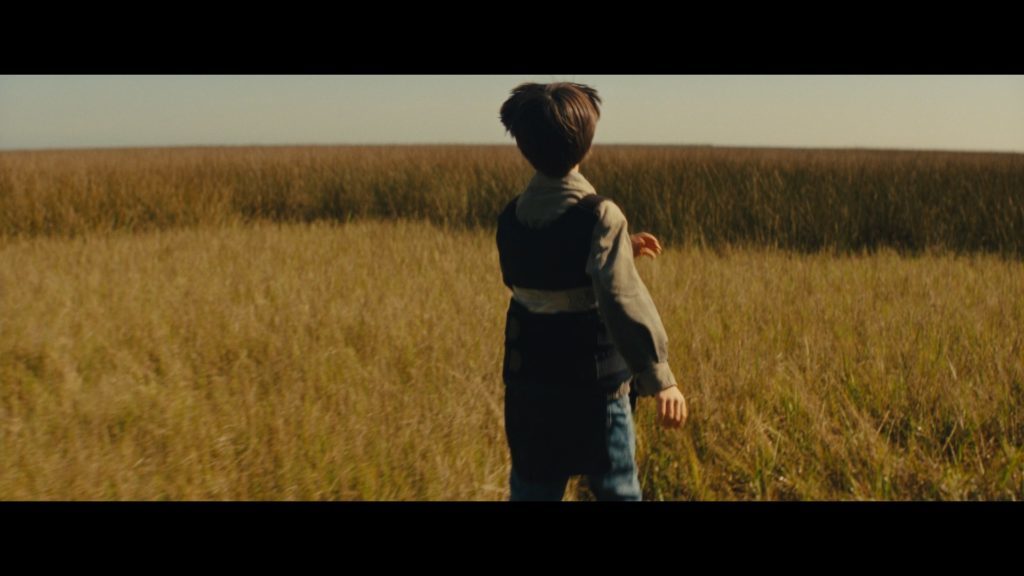 Midnight Special is a film that’s all about quiet intensity. At its core is a touching story about a father who just wants to save his son from a world that just wants to exploit him. The film is slowly paced, building to a less than satisfying conclusion, but this is the kind of film that’s all about the journey, and in that regard, it succeeds. The chase is exciting, and intriguing, with a cast of strong performers, including a supporting cast that is filled out with players such as Adam Driver and Kirsten Dunst. It wants to be a slower, more grounded version of a Spielberg movie, but in the end, it falls just short of it’s goals.

The Video (4.5/5)
Shot on 4-perf 35mm film using Panavision anamorphic lenses and finished using a 2K digital intermediate process, Midnight Special was presented with a theatrical aspect ratio of 2.35:1. This Blu-ray presents the film in 1080p, maintaining the 2.35:1 aspect ratio. 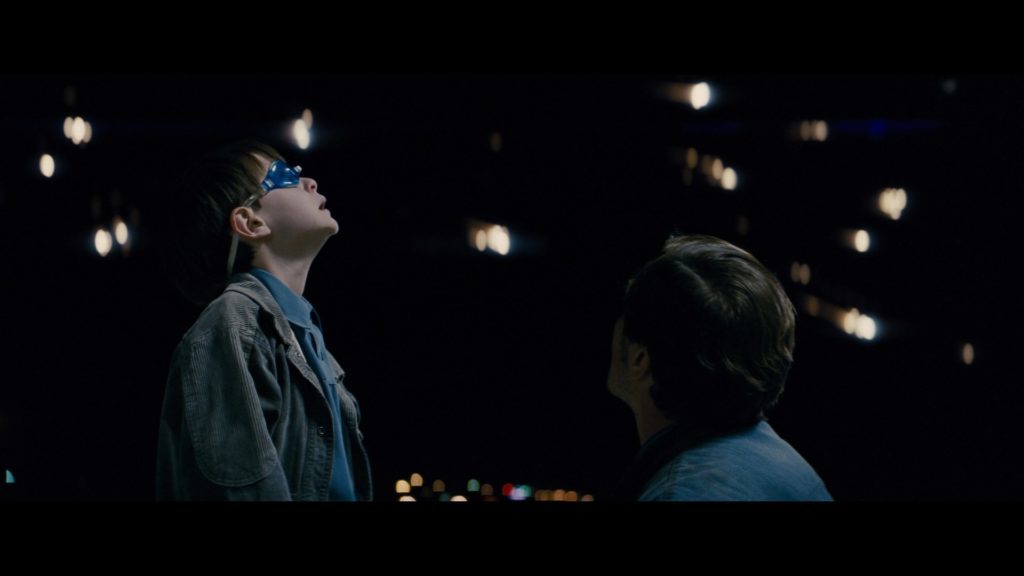 Shot by cinematographer Adam Stone, you can tell that Jeff Nichols worked with him to pay homage to the photography of Close Encounters of the Third Kind and sci-fi films from the late 70s. Much of the film has a soft look to it, with detail getting lost as an artifact of the original photography due to that natural softness. Most of the film is takes place at night, and while I had a hard time figuring things out during a few shots when I saw the film in theaters, but these same scenes resolve much nicer in this 1080p video transfer. Contrast is fantastic, and color, while minimal at night, has a golden brown hue to it during the film’s daytime sequences. Skin tones resolve naturally for the most part, sometimes looking a little strange during the darkest of scenes. 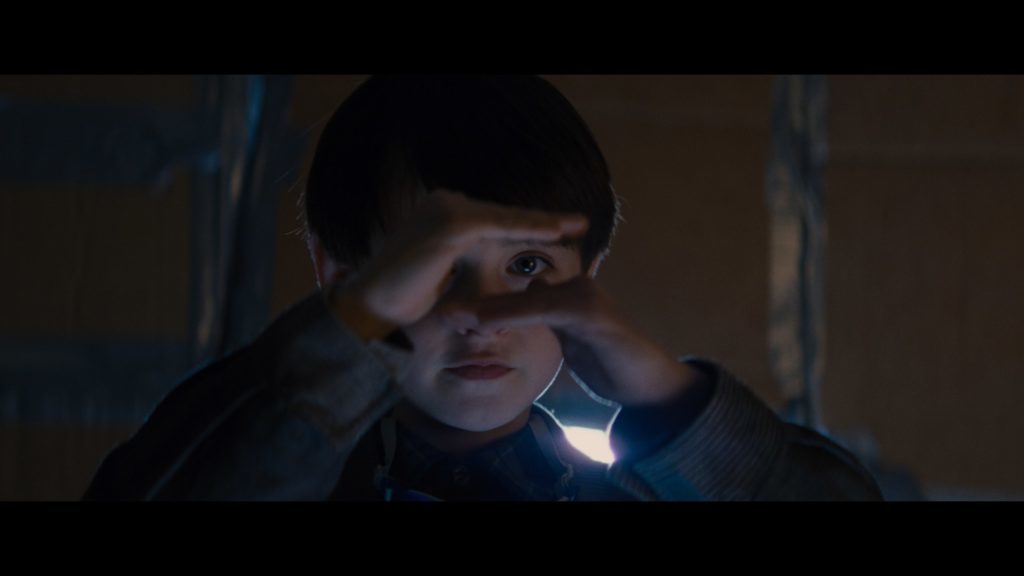 The film is bathed under a layer of light film grain throughout the feature, but it never becomes intrusive. As for detail, as I mentioned above, much of the film falls soft as an artifact of the original photography, and detail sometimes gets lost in wide shots. Close ups reveal excellent detail, however infrequent they are. Midnight Special will never blow anyone away with the style that it was shot, but this 1080p transfer faithfully recreates the intent of the creative team accurately.

The Audio (4/5)
Midnight Special was presented in theaters with a 5.1 surround sound mix. On Blu-ray, this mix is recreated using a 5.1 DTS-Master Audio surround soundtrack. 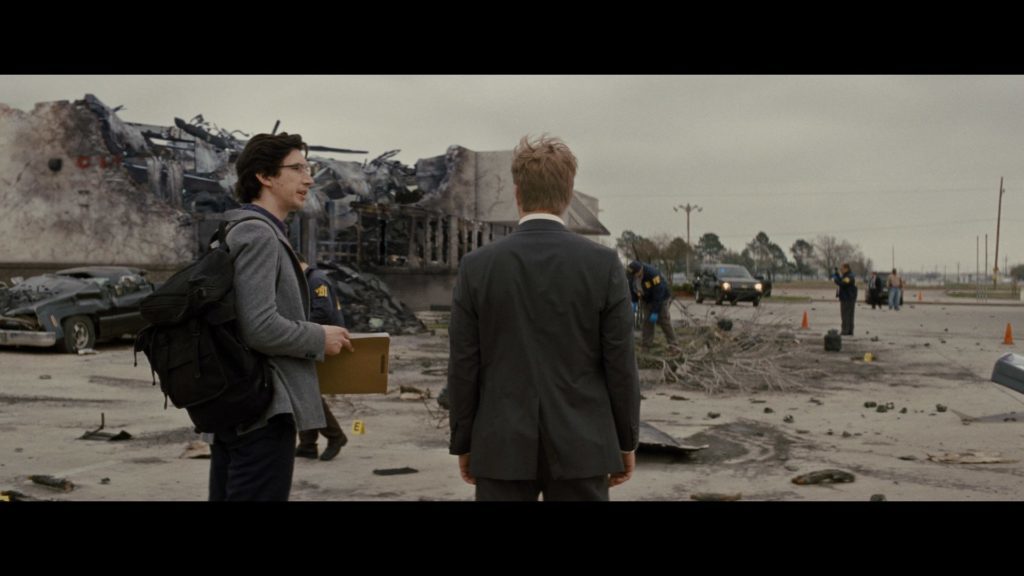 Midnight Special is a quiet movie, mostly centered around dialogue in the center speaker channel. On a few occasions, the sound field erupts to life, rocking the soundscape with explosions and action. Sound infrequently pans to the left and right speakers, and surrounds are typically reserved for ambient noise, and the occasional piece of score. As expected, the 5.1 DTS-Master Audio soundtrack is competent, but nothing exciting.

Special Features/Packaging (1/5)
Midnight Special comes packaged in a standard blue keepcase from Warner Home Video. The front artwork mimics promotional artwork used to advertise the film, featuring Michael Shannon as Roy, holding his son as a light shines behind them. The back artwork features a few shots from the film, a paragraph describing the film, some credits and technical info, and a short list of features. Disappointingly bland. 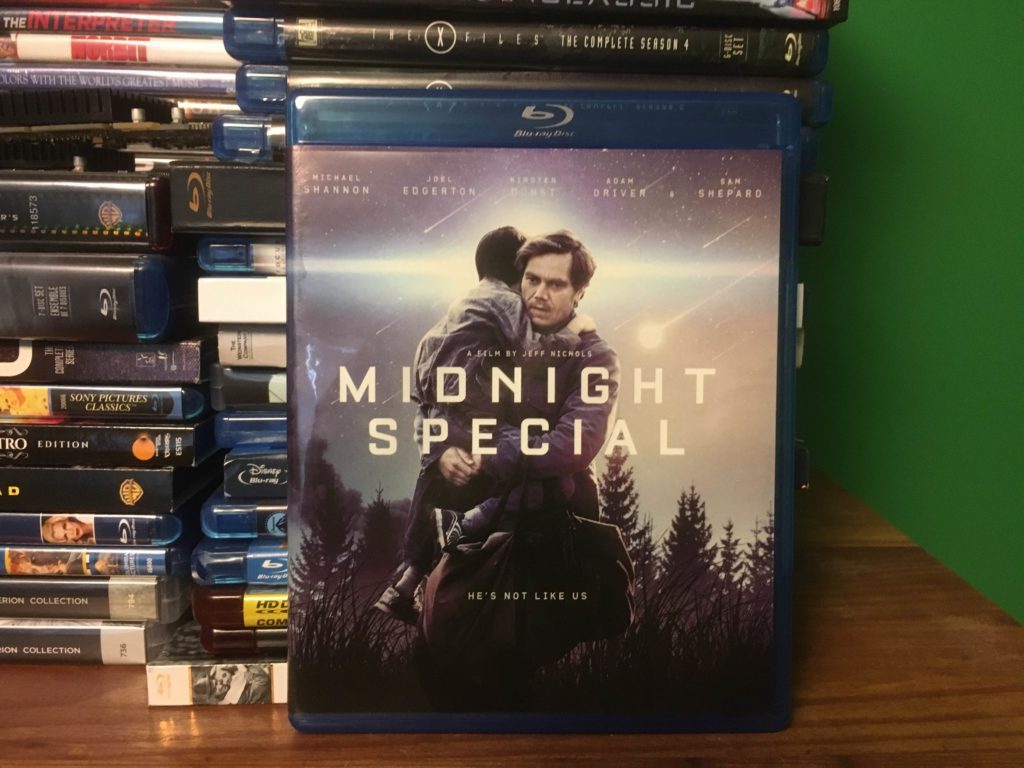 The minimal special features are as follows:

Origins – director Jeff Nichols and principal cast members discuss in depth the motivations and origins of each of the main characters of the film. There are five clips for Roy, Sarah, Lucas, Seveier, and Alton, and each one is very brief to the point where all I wanted out these is more. For what we have, Jeff Nichols’ insight is very effective at explaining each of the characters.

The Unseen World – Director Jeff Nichols talks about the ideas he had when he came up with the film, and his different motivations for the major plot points of the film, specifically dealing with ideas from the second half of the film. Once again, the principle actors step in to add their own insight to these ideas, which is fun. You can tell that everyone involved with this film really understood and enjoyed making this movie, even if Warner Bros. Studios didn’t. 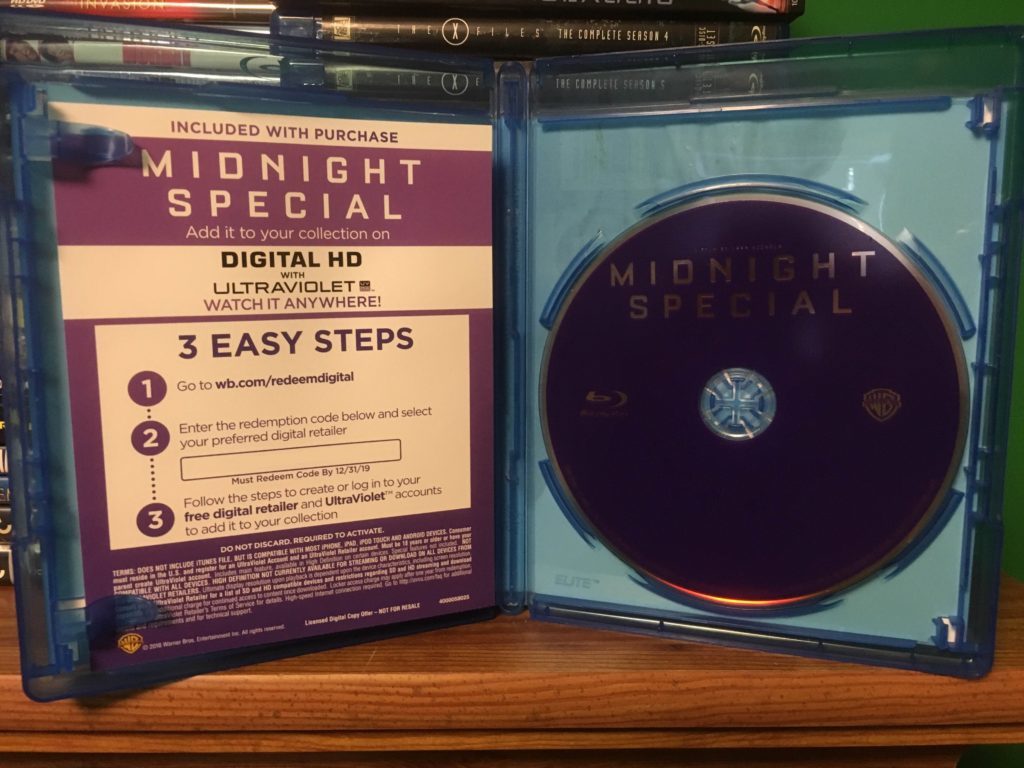 Midnight Special was clearly not a prestige release from Warner Bros. The packaging is fairly barebones, and looks pretty uninspired, and the fact that we get less than twenty minutes of extras is just disappointing. This movie was well reviewed, and Warner has essentially put the bare minimum of effort into releasing the film on home video. 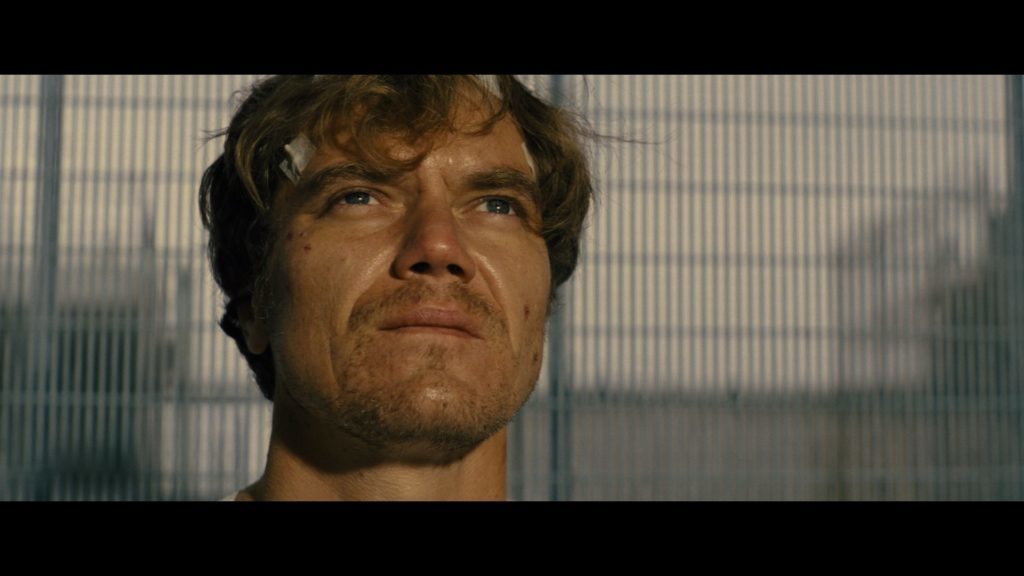 Midnight Special is an entertaining, if not somewhat unsatisfying entry into the genre that modern directors such as J.J. Abrams and the like have created in which they try their own hand at making a Spielberg inspired film. The film burns quietly, as our leads get chased across the southeast United States, searching for answers and some peace of mind, building into an exciting climax that sorta fizzles out. The journey however, is exciting and emotional, and worth the two hours or so that the film runs. This Blu-ray, released by Warner Home Video, features a competent 5.1 sound mix, and a faithful 1080p video transfer, which is unfortunately accompanied by a weak set of features, and disappointingly uninspired packaging. If you’re a fan of sci-fi, or enjoy Spielberg-esque films, this one is definitely worth a look.