I’ll admit, when I see that Clint Eastwood’s behind the camera directing a movie, I typically let my guard down. The “Man with No Name,” has had one of the most varied and successful careers in cinema history, starting off playing cowboys and graduating to become one of the most consistent directors in modern Hollywood. Under his watchful eye, we’ve gotten classics such as Unforgiven, Million Dollar Baby, and Gran Torino, to name a few of his best. So, when I popped in Warner Archive’s recent release of Midnight in the Garden of Good and Evil, I expected the best. I was oh, so wrong. 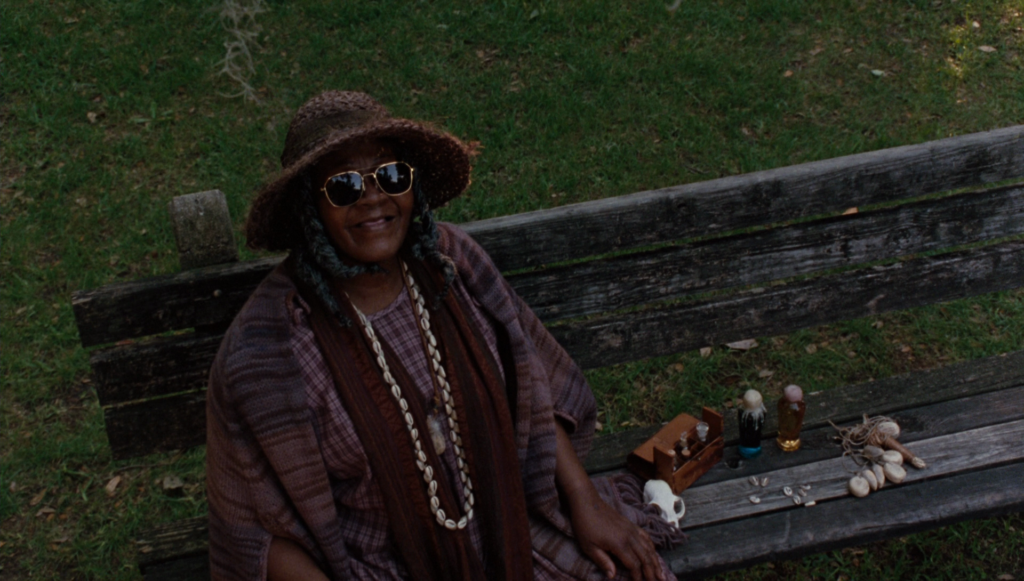 Midnight in the Garden of Good and Evil, adapted from a 1994 non-fiction novel of the same name, is the story of a murder, and the trial that evolved from that murder. The story is told from the perspective of writer John Kelso, who is brought to the small southern town of Savannah in order to cover the massive Christmas party that wealthy man Jim Williams holds every year for a magazine. In the middle of the party, local boy Billy Hanson storms in, and demands money in a drunken angry state. Jim asks him to leave, and later that night, is found murdered at Jim’s hand, supposedly in self-defense. Shortly afterwards, Jim is arrested, and John Kelso is left to follow the trail to the truth behind Hanson’s murder, unraveling a web of secrets, lies, and prejudice that runs through the heart of the small southern town.

Midnight should have been a tight, intense investigation story, in which John Kelso, played by an unfittingly casual and uninspired John Cusack, uncovers the dirty secrets of a small southern town in order to find the truth behind Hanson’s murder at Jim Williams’ hand. Instead, it gets dragged down by a ham-fistedly inserted love interest, a voodoo storyline, and a series of obnoxious interactions with a local showgirl of sorts that pretty much lead nowhere, bloating the film into a two and a half hour snooze fest. On top of that, the bulk of the film takes place in a courtroom. Honestly, with all the distracting B-plot elements, and the agonizingly slow courtroom sequences, Midnight feels a lot like a TV movie. The acting is about as melodramatic as it comes, with Kevin Spacey playing up his southern accent as wealthy man Jim Williams, and Jack Thompson and Bob Gunton chewing up the courtroom scenery as cheesy lawyers, bickering and overacting throughout their entire time on screen.

Midnight just drags, and drags, and doesn’t feel like it has a whole lot to say. There’s about 40 minutes or so of interesting movie, with Kelso following a trail of poor evidence tampering and overall laziness that serves as some sort of investigation, and roughly another two hours of Kelso doing things like attending multiple fancy parties, hitting up less than fancy parties, going out for coffee with his love interest, played by Eastwood’s daughter Alison, literally just sitting in a courtroom and indulging in some of the worst explained and randomly implemented portrayals of voodooism I’ve ever seen. It’s like screenplay writer John Lee Hancock took the original novel, removed as much of the interesting pieces of the story as possible, and filled it with excuses to shoot on location around as much as possible of Savannah, Georgia as possible. 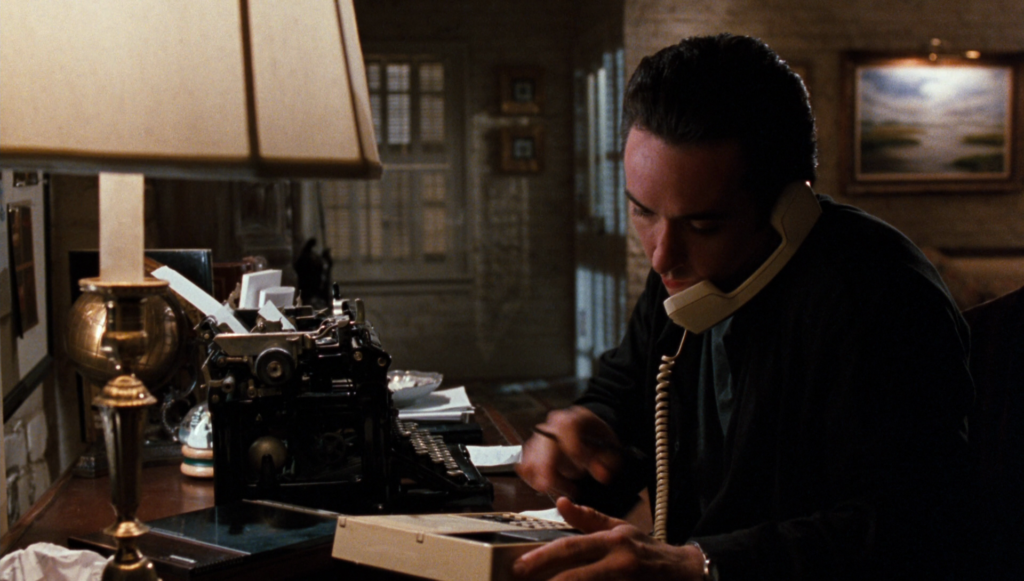 Unfortunately, the longer Midnight ran, the less I liked it. By the time the film wrapped up with a rather sudden and contrived voodoo ending of sorts, I wasn’t sure what I hated more – the film, or myself for soldiering through it. It is by far the most disappointing Clint Eastwood feature I’ve ever had the displeasure of watching, which is a real shame. I guess even the Man from Malpaso misses sometimes, as Midnight in the Garden of Good and Evil is at best boring, and at worst incomprehensible.

Shot on 4-perf 35mm film, Midnight in the Garden of Good and Evil was finished photochemically, and cropped in post to 1.85:1 for theatrical projection in 1997. Warner Archive’s new Blu-ray release of the film is presented in 1080p, and even though the case says 1.85:1, it’s definitely a 1.78:1 aspect ratio presentation, as confirmed by viewing the film on two separate TVs. 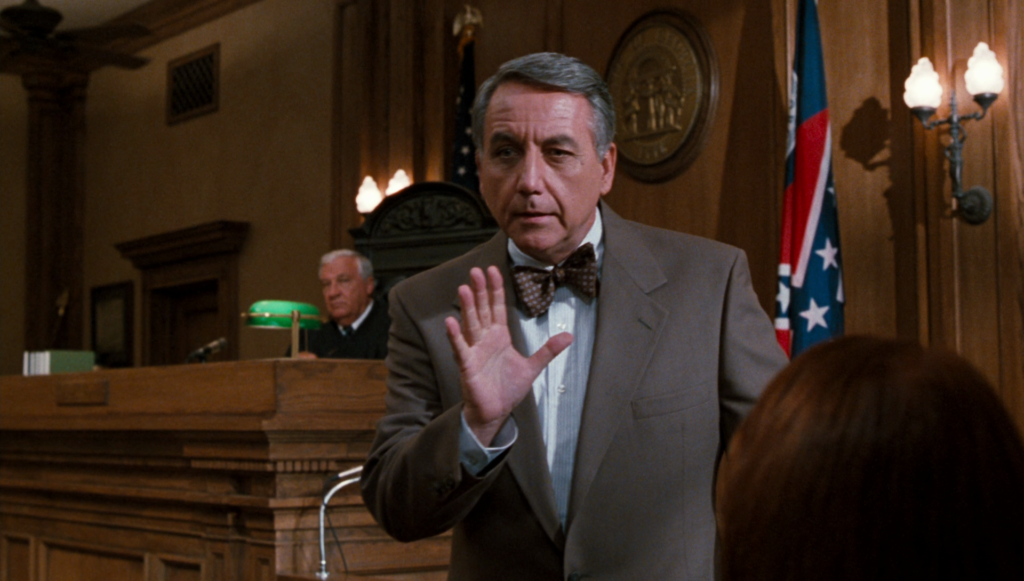 I don’t have a ton to go off of, but Midnight’s visual transfer has that messy grain, and overall softness that just screams, “Old DVD Master,” which is surprising, because it isn’t – this is a fresh 2K scan of a 35mm interpositive of the film. The film starts off with some incredibly soft and low resolution establishing shots, which may be inherent to the film’s original capture format, but it sets the bar awfully low for the rest of the feature. Luckily, detail and sharpness uptick a bit once we get through the titles, but the film’s entire runtime is plagued with weak colors and poor contrast. The interpositive used to create the new scan is impeccably clean, but the transfer just feels old, and that’s not a good thing.

Midnight in the Garden of Good and Evil is presented in 5.1 DTS-Master Audio, recreating the surround experience heard in theaters in 1997. 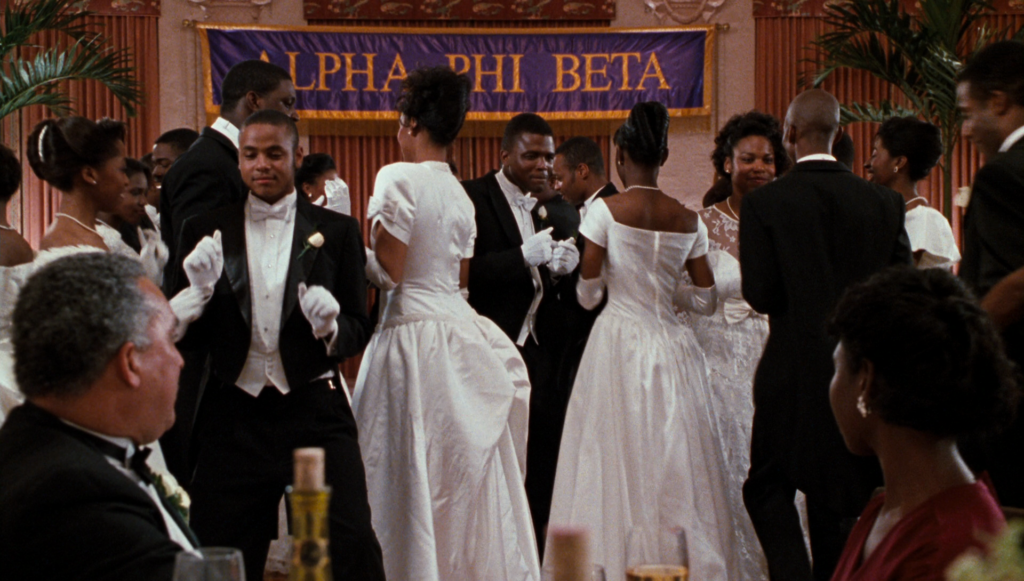 For all of the flaws I found with the visual transfer, Midnight sounds pretty good on Blu-ray, all things considered. Dialogue is crisp and clear throughout the feature, and ambient sound effects consistently drift across the front soundstage. Surround application is minimal, and although there isn’t a terrible amount of subwoofer activity, what we do get is deep and resounding. It’s mostly a courtroom drama, but it sounds pretty good for what it is.

Released to Blu-ray by Warner Archive, Midnight in the Garden of Good and Evil comes packaged in a standard blue keepcase. The front artwork is copied and pasted from a previous DVD release of the film, with Cusack and Spacey’s faces set above the famous picture of the Bird Girl statue used for the original book’s cover, all set in blue and black. The Warner Archive banner sits about the art. The back artwork features a couple of cropped shots from the film, a couple paragraphs about the film, a list of features, credits, and technical info. Overall, a kind of weak and uninspired package. 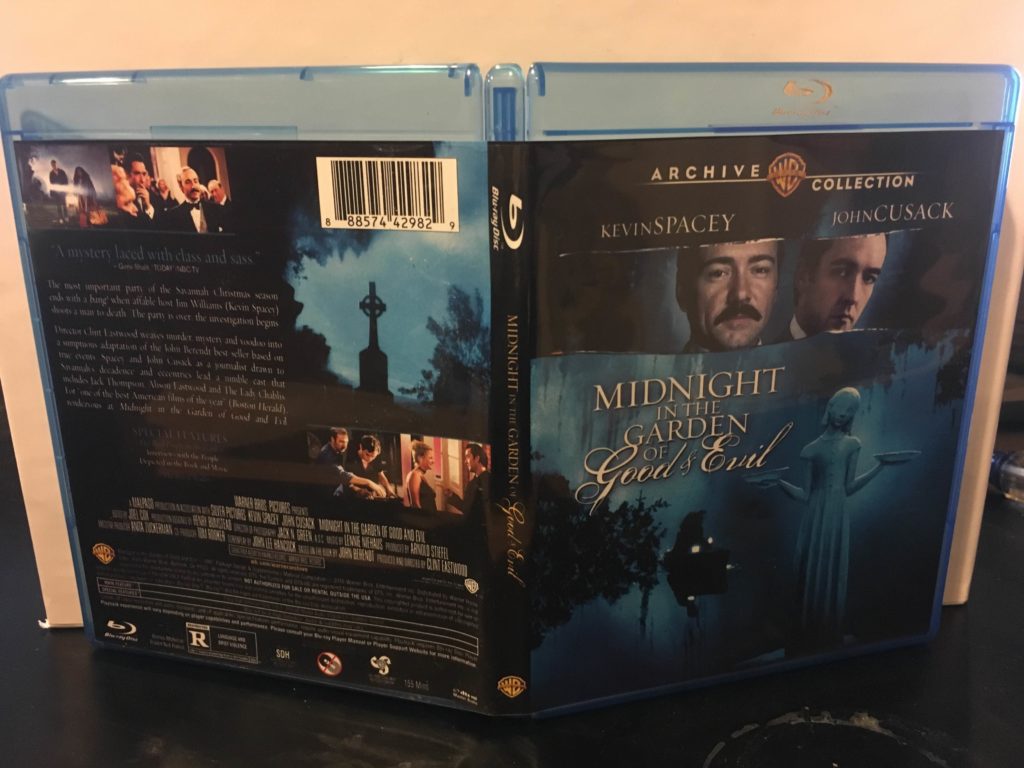 The Real People in the Garden – a 20 minute feature that interviews the actual people that were depicted in the film, including Jim Williams’ sister, who goes to great lengths to discuss his legacy through the film. 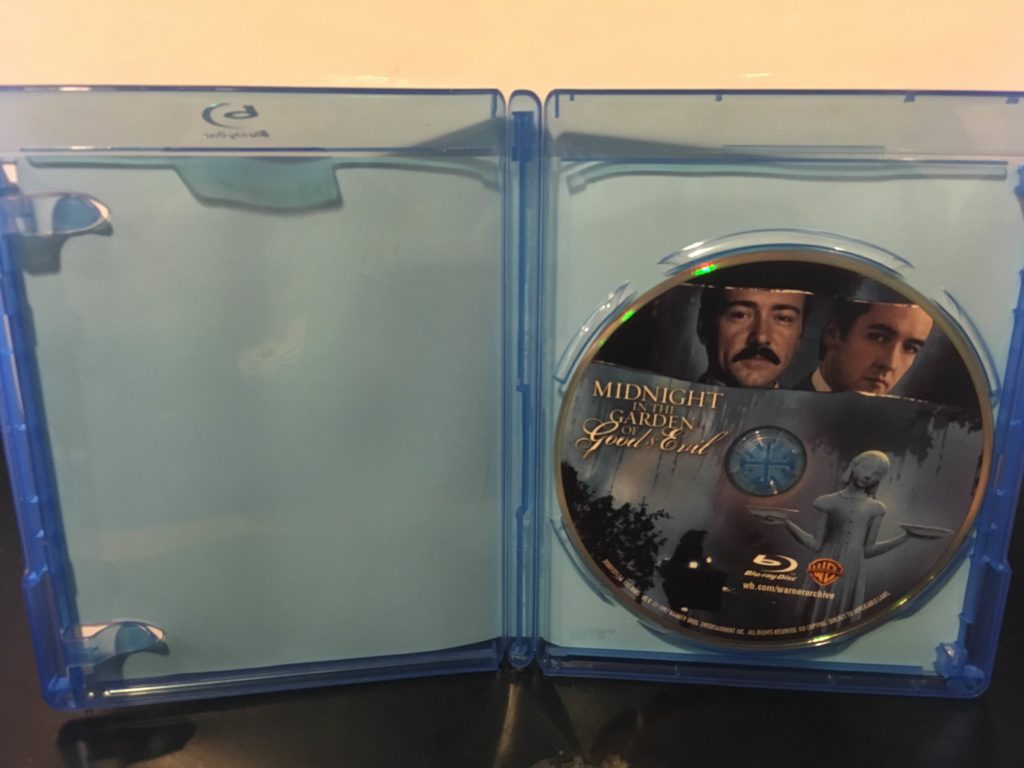 In terms of features and packaging, this release comes up a bit short. 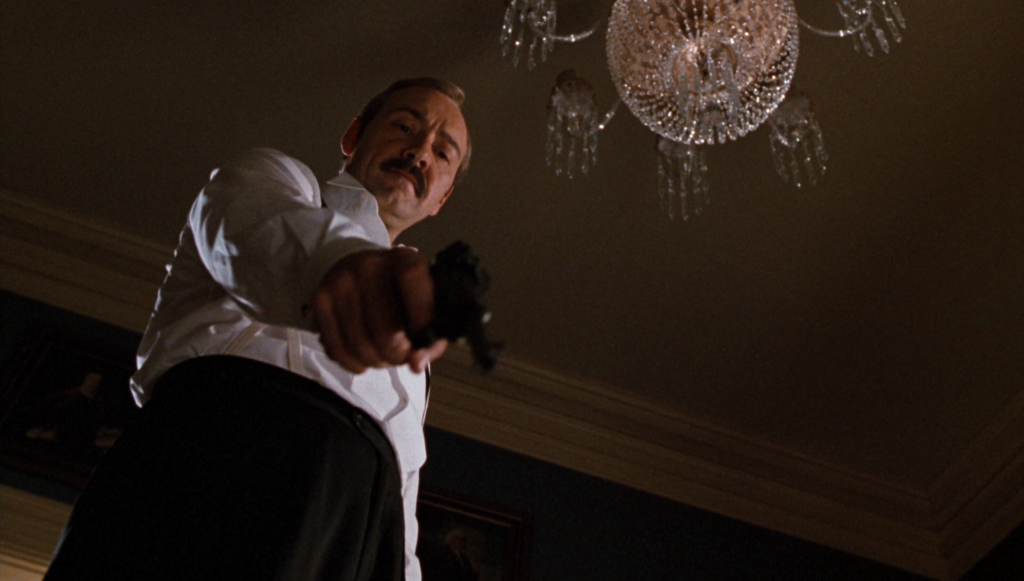 Midnight in the Garden of Good and Evil is a frustrating, and ultimately bland movie that tries to blend a detective story and courtroom drama together, and base everything on a true story that just doesn’t seem to be interesting enough for the big screen. The production values and acting seem far more fit for a TV movie, and the script is packed with enough distractions that by the time I reached the end, I didn’t even care about the main plot of the film or any of the characters. Warner Archive’s Blu-ray release of the film features a rather inconsistent and low resolution-ish visual presentation, competent audio and weak packaging and special features. This one’s for the pre-existing fans; newcomers should approach this one with extreme caution.