I am, by no means, an expert on the French New Wave. Yeah, I know Truffaut and Godard, but I can’t say that I have an intimate familiarity with either one. With Godard, all I’ve seen previously is his breakthrough film Breathless, so when I sat down to watch his 8th feature film, A Married Woman, I sort of had some sort of expectations for how it would be edited, shot, and presented in terms of narrative. And by that, I mean that I really didn’t: that was Godard’s thing, he liked to change up the game on a regular basis with his filmmaking, referencing classic film genres, and putting his own unique spin on things. A Married Woman is no different. 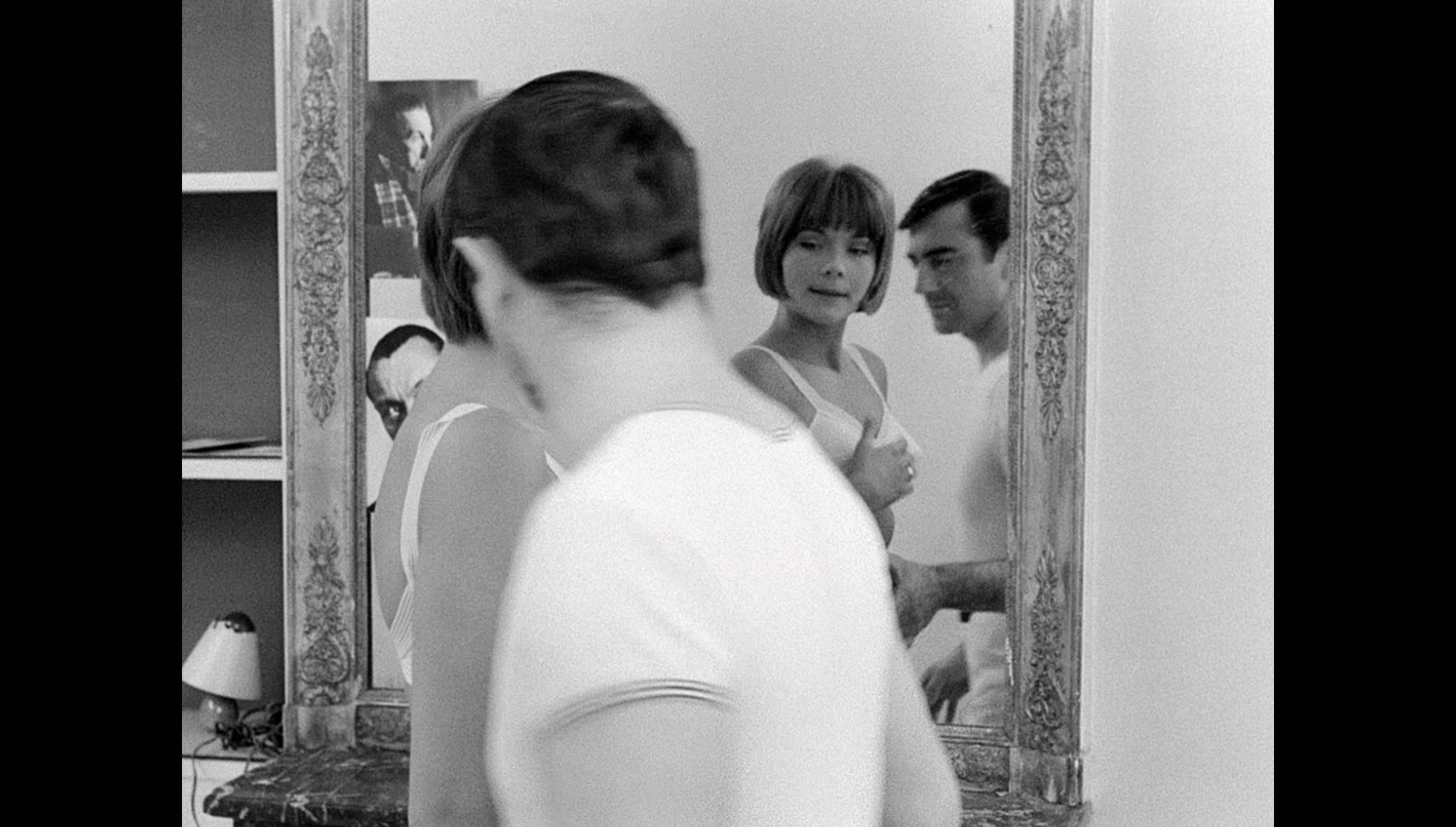 The film’s plot concerns a married woman who isn’t sure whether or not she truly loves her husband. While he is away, piloting a small passenger plane, she often finds men to hang around with, which has previously gotten her into trouble. Through the course of entertaining guests, play fighting, observing love through the lens of young women, and finally a doctor’s visit, she determines whether or not she plans on staying with her husband and living a conventional life, or whether she is to run off with her most recent affair partner.

While a traditional romantic conflict story at heart, the presentation is so avant garde, so unique, that at times I had a hard time following what was going on. Many of the scenes are underscored with a whispered narrative by the wife, and maybe it was the translation or maybe I’m incompetent, but I just felt lost in some of the things that were said. At least one scene, where our main characters philosophize about memory, was broken down into four distinct pieces complete with intertitle cards to help establish what exactly is going on. Godard uses his editing and his camera to create a disorienting, entrancing vision of this story, one that is occasionally difficult to follow. 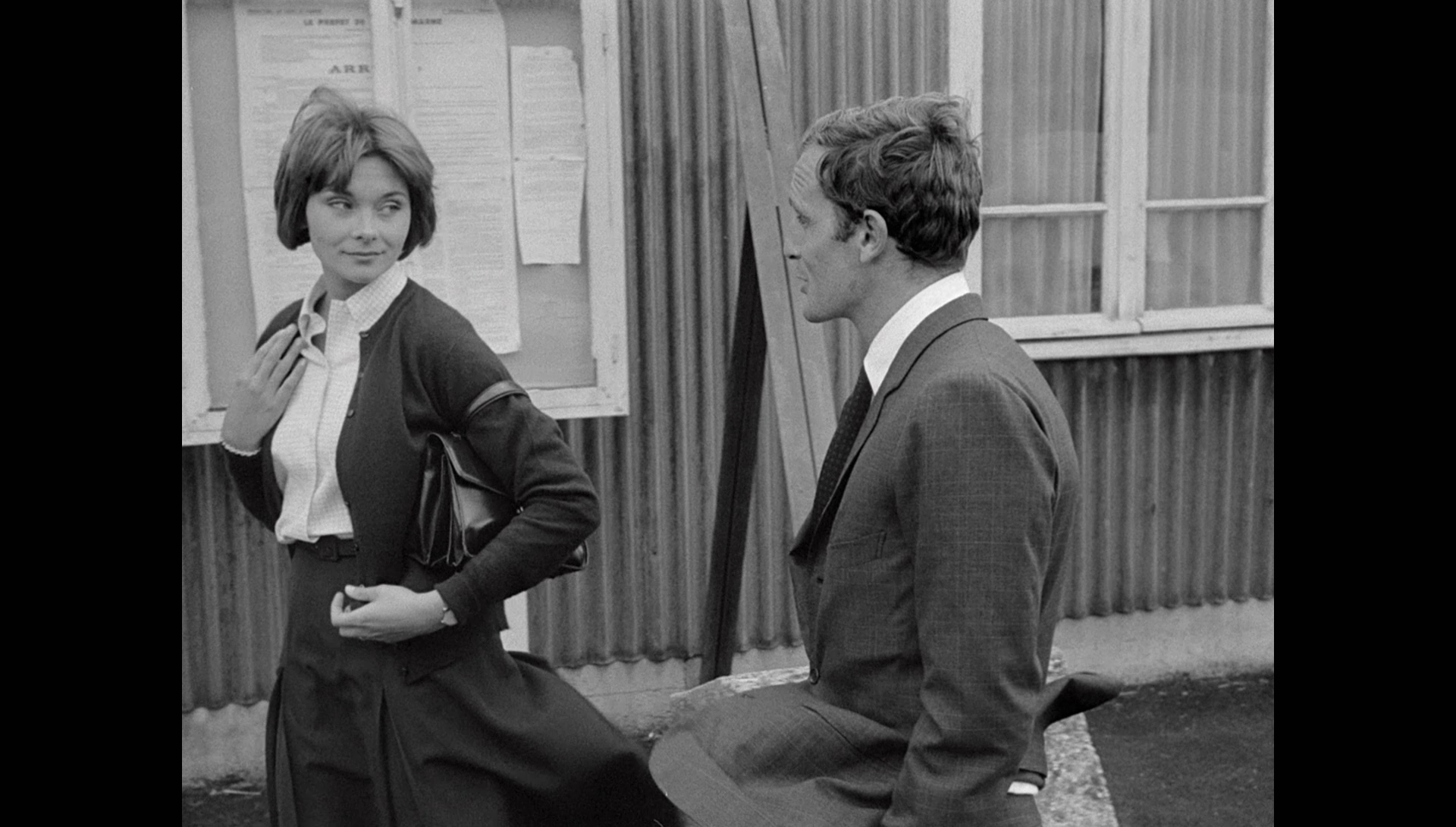 His sense of visual style however, remains intact. In the opening credits, he announces his intentions to eschew the use of color, instead favoring a bright and contrasty black and white look. Many of his traditional camera innovations pop up, such as the camera at one point tilting completely to one side, and his inventive use of exterior shoots to create elaborate long takes that follow our characters in and out rooms in their house. Many of the images he creates to represent sensuality are incredibly striking, usually images of various body parts placed on a bright white background to really intensify the contrast. Unlike Breathless, which is a sexy, risque kind of film, A Married Woman feels far more grounded in reality, both in terms of the story it tells, and in terms of the way Godard frames, edits, and shoots the film. 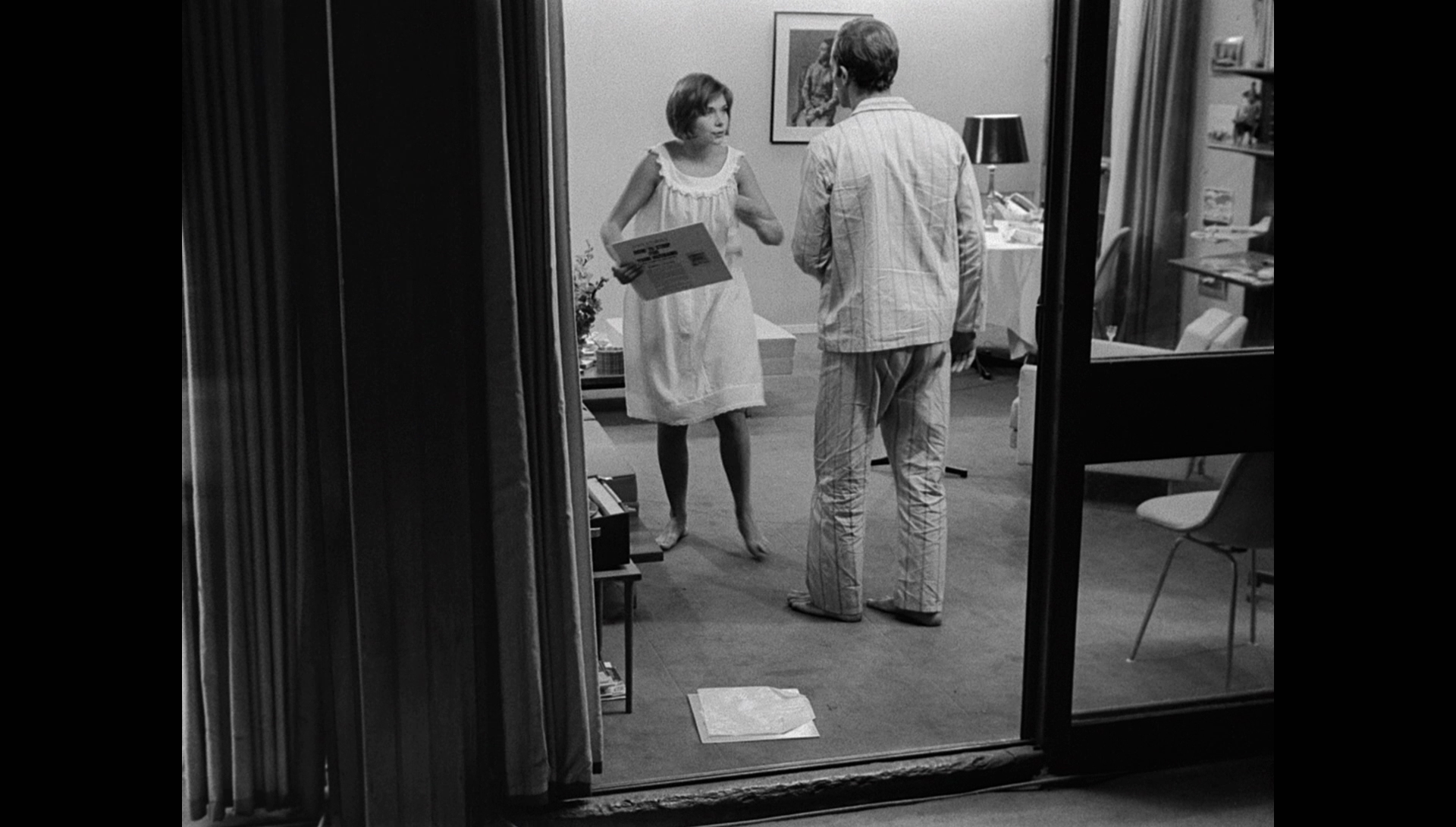 Visual innovations aside, I found the film’s story to be rather conventional, and at many times I sort of lost focus durring the film’s hour and a half runtime. It feels a little long, and sometimes the camera’s eye lingers on some long takes a little too long.  A Married Woman will by all means please most Godard fans, and those who enjoy films from the French New Wave era of filmmaking, but it never really spoke to me. I fear that this one has limited appeal.

A Married Woman debuted on 35mm film back in 1964, with an aspect ratio of 1.33:1, part of Godard’s preferred basic, no frills style. The packaging notes that this is a brand new HD restoration, and after doing some digging, I have found that it was restored by BAM Cinematek at a resolution of 2K. The Blu-ray is presented here in 1080p, maintaining the 1.33:1 aspect ratio, with black bars on either side of the image. 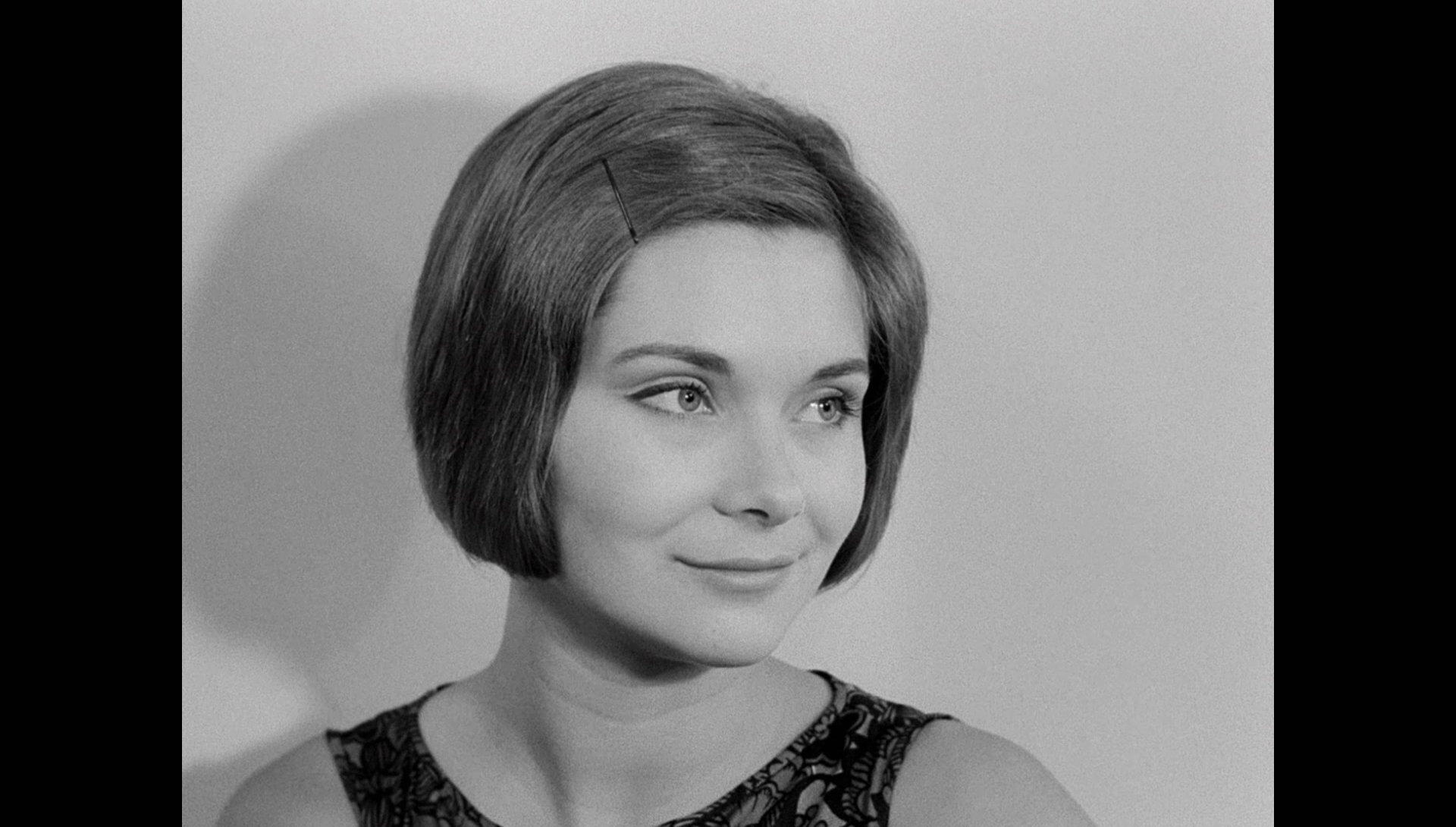 The film truly shines on Blu-ray, showing off the full benefits of a proper HD restoration. The film is remarkably clean, and is presented without any stability issues, which plague many titles of this era. Contrast is excellent, and blacks are rock solid, crucial for a film shot using black and white 35mm film. Many of the scenes are shot in wide-shot framing, but detail resolves nicely and focus is rock solid. I may not have been the film’s biggest fan, but I can say without a doubt, that this is the nicest presentation of A Married Woman on home video yet. 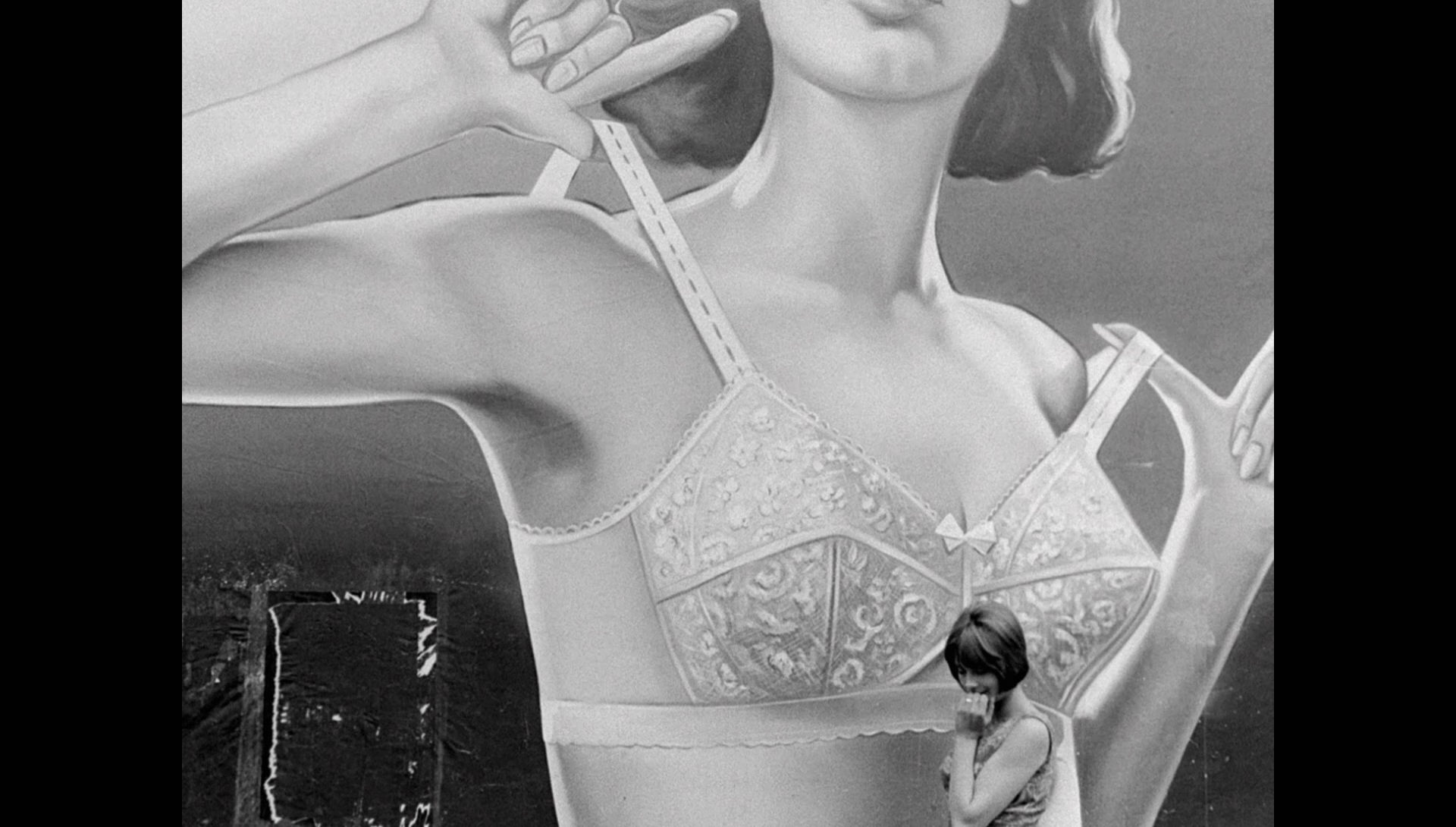 A Married Woman was presented in mono sound in theaters, and is presented on home video with a mono LPCM track. For a 1964 production, the film exhibits none of the traditional issues found with films of the time – hiss, tin-like sound reproduction, or pops and clicks of any sort. The sound is clean, full, and mixed well. You hardly ever strain to hear a word for the most part, but on occasion our lead woman’s narration is a bit difficult to understand; I’ll chalk that up to her delivery, not the soundtrack’s fault.

A Married Woman, released in the US by Cohen Media Group, is presented in a standard Blu-ray keepcase. The front artwork features one of the more memorable shots from an early lovemaking sequence in the film, surrounded by the non-traditional grey and black Cohen Media Group border, as opposed to the traditional red.  The back cover features the traditional set of information -technical features, credits, a paragraph about the film, and the list of special features. A booklet is included with chapters and credits, and there is art on the inside of the case, a frame from the early moments of the film which is rather striking. Par for the course, as far as Cohen releases go. 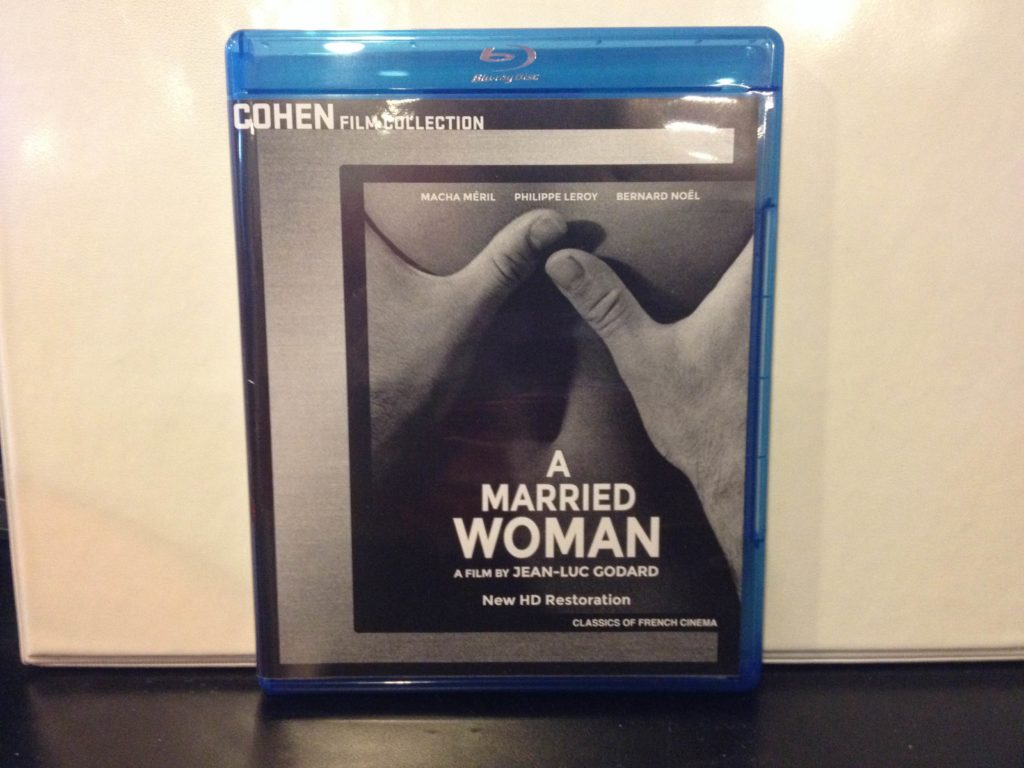 Onto the features, of which there are only 5, 3 of which are holdovers from the film’s 2010 restoration home video region B release:

Interview with Agnes B. – a twenty minute long 2010 interview with French fashion designer Agnes B., who discusses the impact of the Goddard on fashion, as well as his merits as a film director

Interview with Antoine de Baecque – an 18 minute long 2010 interview with a film scholar who specializes in Godard’s work, who analyzes the film as well as the history of the film 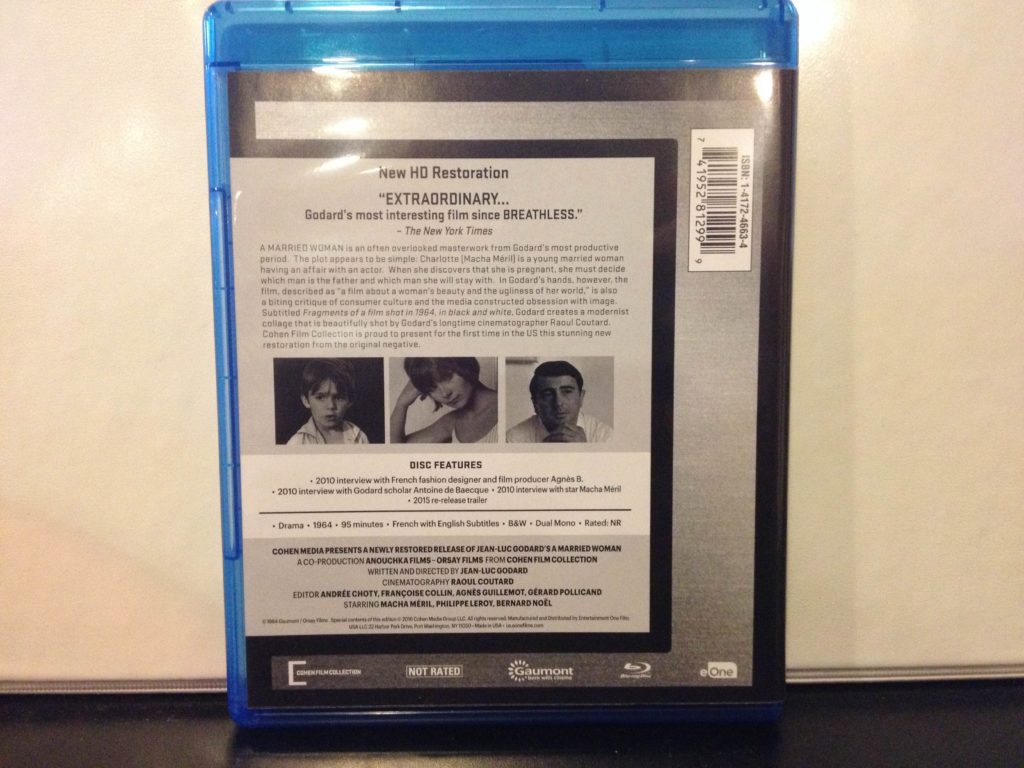 Interview with Macha Meril – a 30 minute long, in depth 2010 interview with one of the two stars of the film. She discusses at great lengths what it was like to work on the film, and with Godard, as well as the impact of the film

Original Trailer – the film’s original theatrical trailer, as it was shown in France in 1964 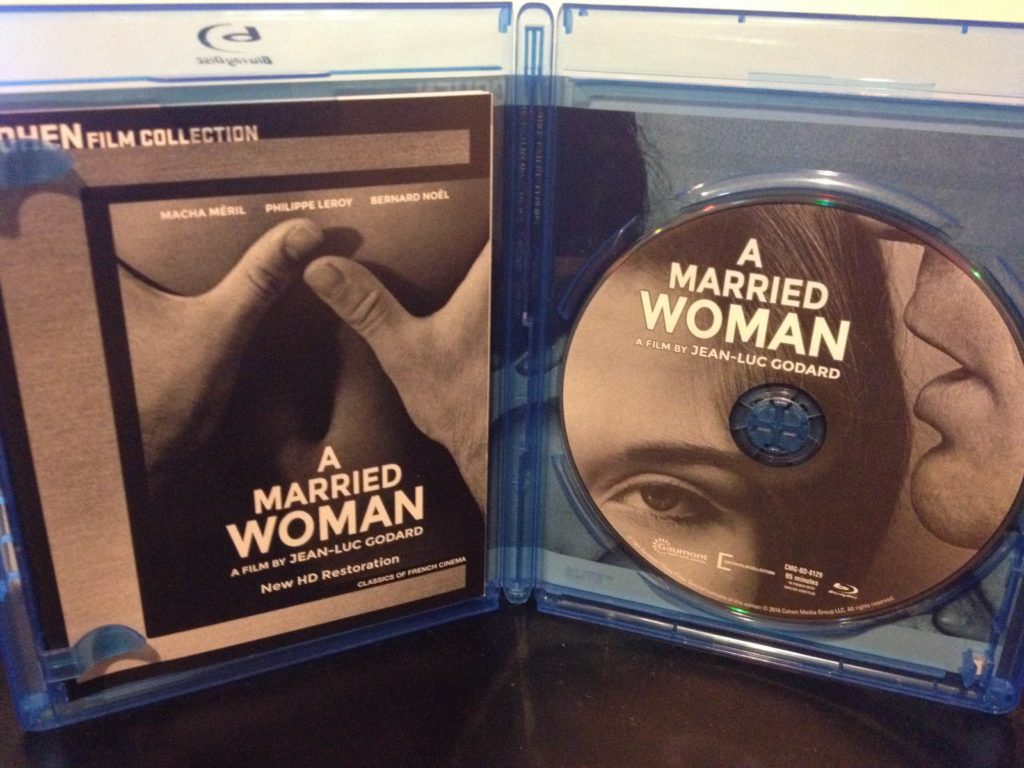 2015 Re-release Trailer – a brand new trailer, prepared by Cohen for their new release of the film 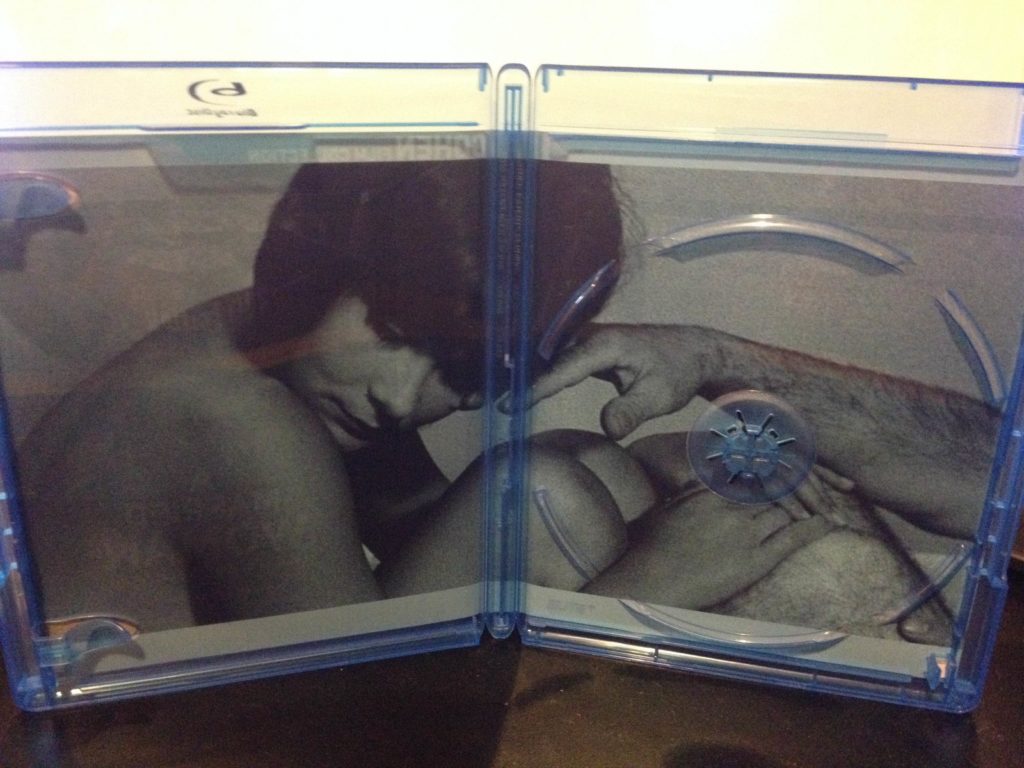 In terms of packaging, A Married Woman is very much par for the course for Cohen releases. Decent, but not exactly mindblowing. The features included are limited in number, but each of the three interviews is a wealth of information about the film and Godard and his influence. The trailers are just that: trailers, so take that as you will. Overall, although there’s only one new feature for this release, it has a fairly satisfactory set of features.
3.5/5 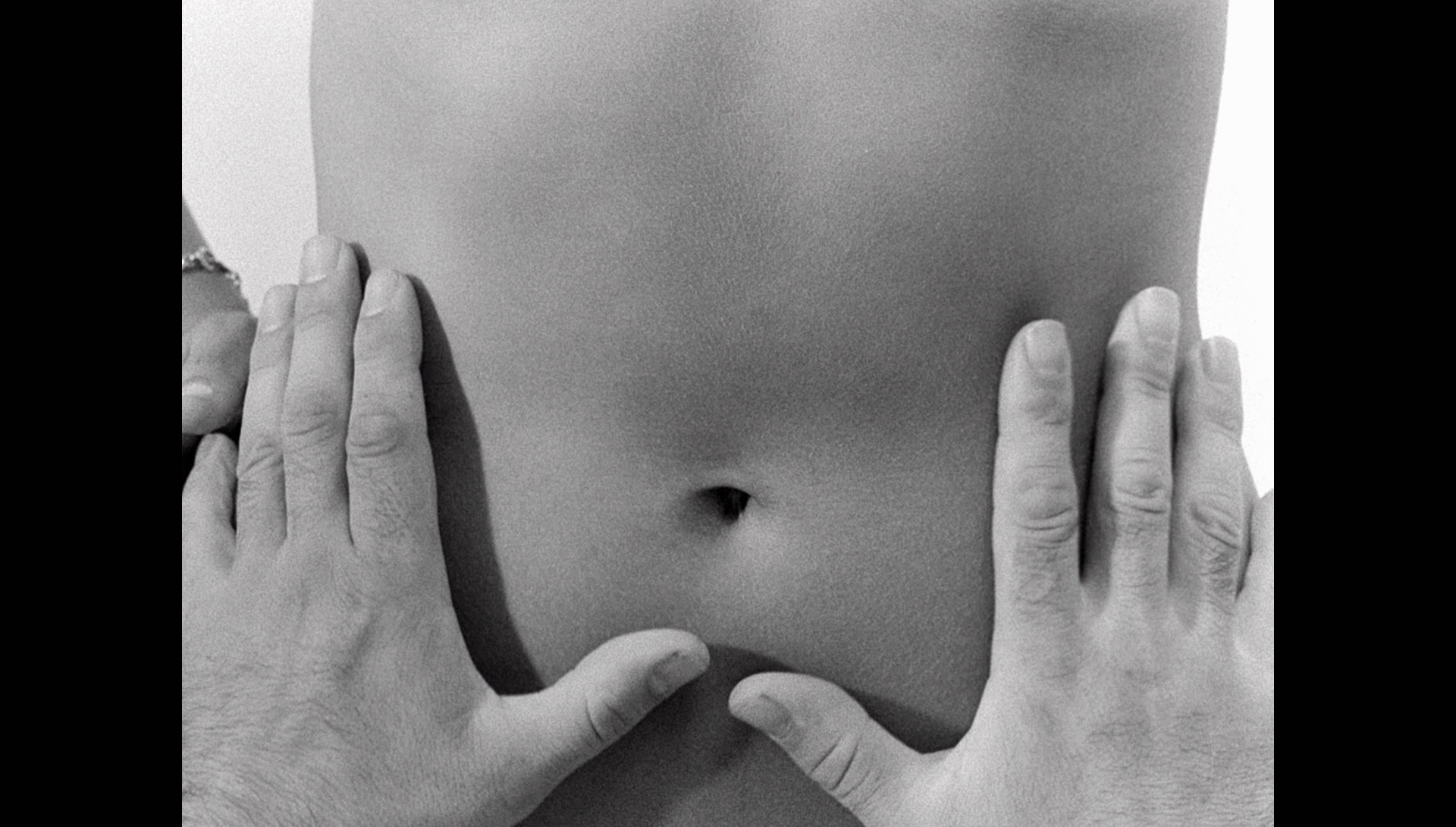 Something about A Married Woman just didn’t vibe with me. The film is full of rich social commentary, and is full of Godard’s standard visually striking oddities, but the pacing drags, and something gets lost in the way it presents most of its commentary is strange whispered internal monologues from our main character. The story feels formulaic, but through the lens of Jean-Luc Godard, he is able to make it feel fresh at times, but not in a way that particularly endeared me to the film. This Blu-ray of the 2010 2K restoration as prepared by Cohen Media Group features an outstanding visual presentation, as well as a decent sounding mono sound presentation. The features are small in number, but full of unique and interesting insight. The packaging is striking, but falls within the realm of most Cohen releases. Overall, this one has a pretty tough exterior that some may be able to crack, but it certainly wasn’t for me.

Note: This Blu-ray release was sent to us for review. This has not affected the review process in any way, and all opinions are our own.