Getting into writing film reviews like I have done over the course of the past year has allowed me to explore films that I wouldn’t normally see.  Mankillers certainly falls within the realm of films I wouldn’t normally consider.  Films like this certainly have their demographic that they reach out to as I’ve seen a fair amount of these low-budget films featured on the /r/dvdcollection subreddit.

Mankillers was originally released to the world in 1987, written and directed by David A. Prior who, according to his filmography, has been involved in a decent amount of films like this.  This movie features a female CIA agent who is hired to train an all female combat squad for a mission to Colombia in an effort to stop a renegade agent who has hired himself out to a drug cartel and white slaver.  Unfortunately, there are some drawbacks once you see the crew that she’s working with as it is predominantly ex-convicts.  It is believed that their badassery will help lead them to a successful mission and their involvement in a successful mission will ultimately result in them being granted a clean slate.  Will they be able to pull off this mission? 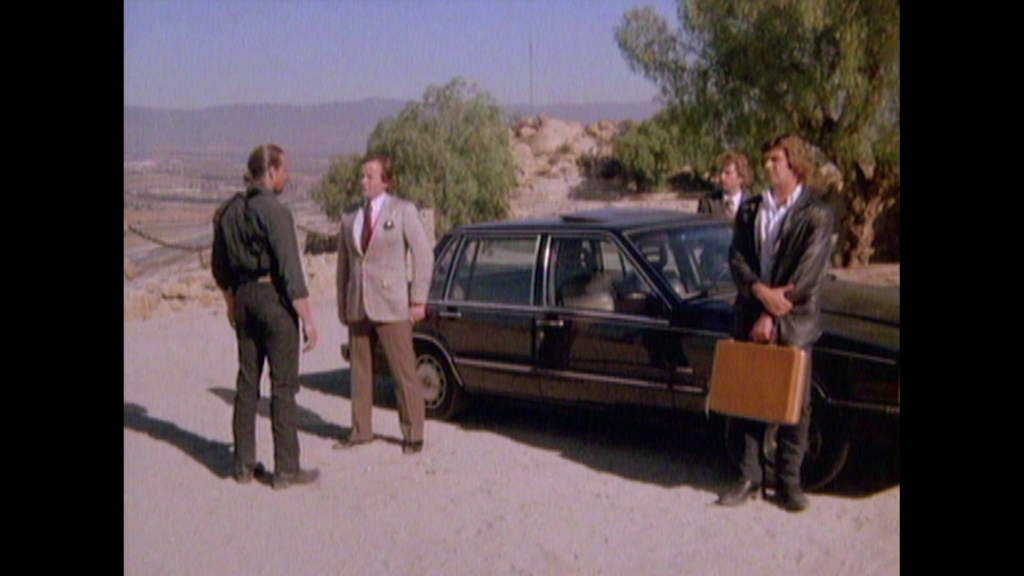 The experience that Mankillers has to offer falls right in line with what you would expect with having only seeing the cover art.  It is loaded with low-budget production efforts, unimpressive performances by the cast and crew, and your run-of-the-mill cheesiness that often comes with Cult Classics.

This film isn’t the style of movie that I would normally go out and grab, nor is it something I’ll continue to pursue because I really wasn’t entertained with it.  As I sat down with this movie, I found myself continuously wondering what I was doing with my evening and found myself thinking that I really could be doing more productive things.

I’m not going to tell you that this was a horrible by any means, it definitely has its quirks and I can completely understand why there is a fairly large audience for them; it’s just that this movie isn’t something I’m to make an effort to check out again down the road. 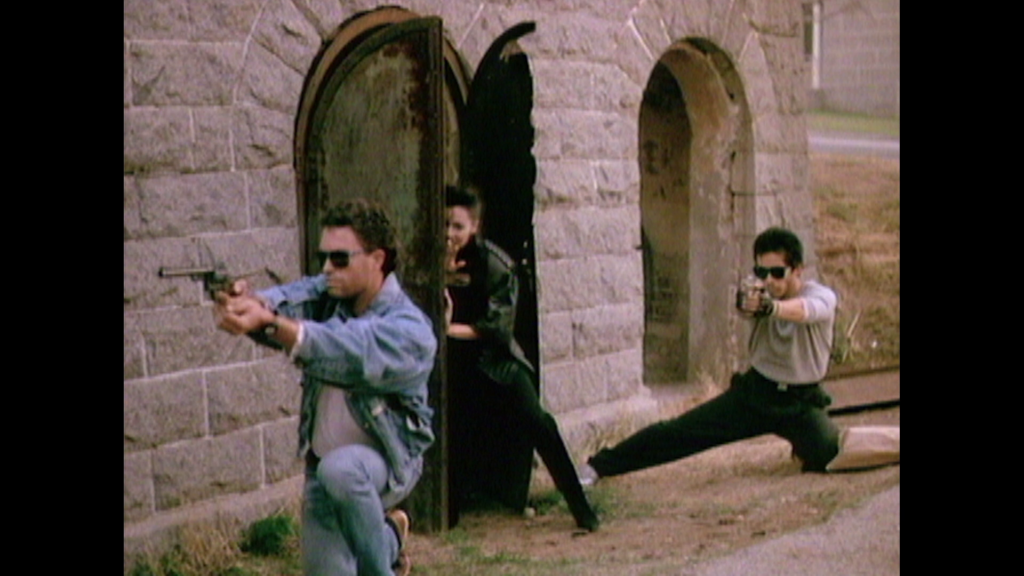 Mankillers comes to us sporting a 1080p resolution; however as you watch this release, it really doesn’t look like it.  This is primarily because of the aspect ratio that it was using, and as I watched it, this movie felt as if I were watching an old school VHS copy of the film and the general appearance that comes with low-budget filmmaking.  The colorization of the scenes looked decent, allowing the viewer to gain a visual understanding of the cheesiness that was happening, however it wasn’t anything impressive. Sometimes low budget films like this are given a nice remaster or cleanup, but this one looks fairly average. Of course, the source material is probably weak as well, but it seems as if little work went into the Blu-ray transfer. 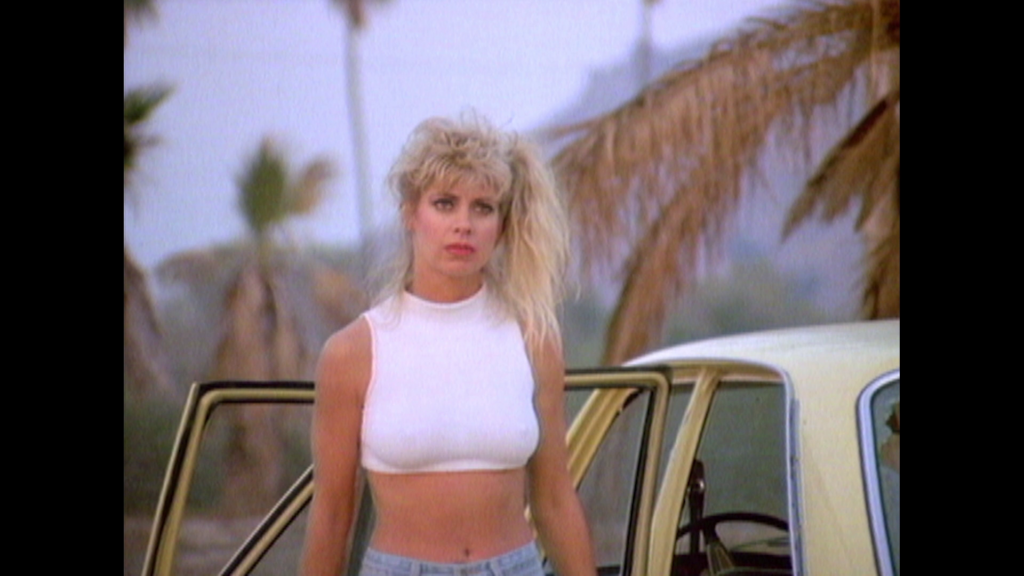 Sporting a 2.0 channel Master HD Audio Track, Mankillers‘ audio was extremely crisp and clear.  There isn’t really anything special to say in regards of audio effects because there really isn’t much due to its low budget for production.  I didn’t find myself having to manually adjust the audio at all, the voices were clear and understandable, and the scenes that called for use of sound effects (things like gunshots) worked out pretty well. 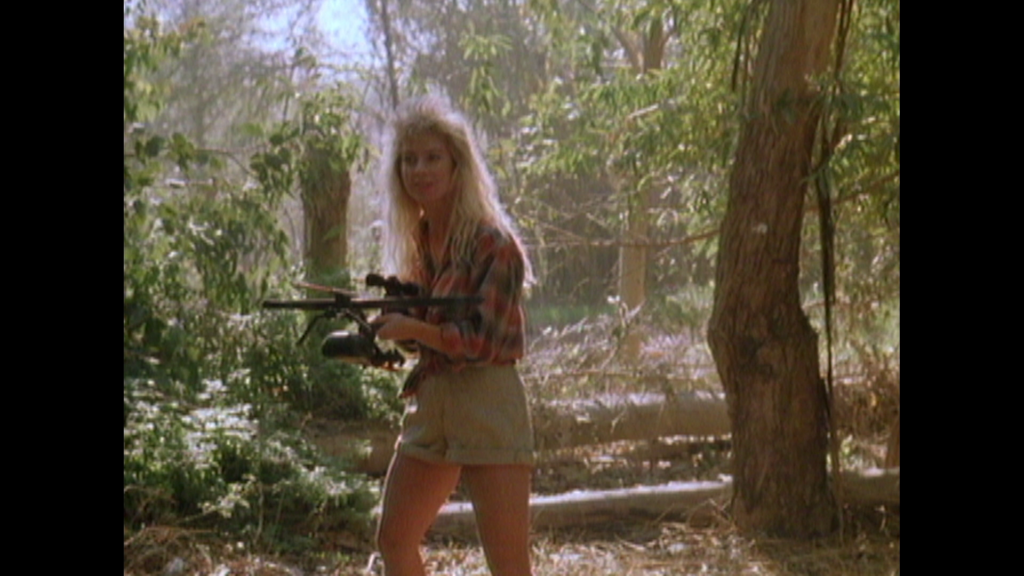 Just like every other release from Olive Films, Mankillers comes packaged in your standard Blu-ray amaray case.  Within the casing is the Blu-ray disc of the film, and your standard promotional material.  There is no DVD Copy of the film, nor is there any digital redemption pamphlet.  While I wouldn’t normally add a digital copy of a film like this to my personal digital library, since there is an audience out there for releases like this; I feel that one should have been included.

Olive Films’ release of Mankillers doesn’t have much in terms of bonus content; however that is right on par with the majority of their releases.  Contained within this films release is the theatrical trailer; and nothing more.  While I would’ve enjoyed the opportunity to see more, I’m not quite sure on what I would ask for in a release like this.  I’m sure there are some deleted scenes out there?  I’m pretty positive that if there are, they certainly would’ve added a lot to the experience this film has to offer.

Overall, Mankillers was worth checking out.  It’s a film that I know I wouldn’t have normally seen without the opportunity that Olive Films had given me.  However, it still remains a film that I wouldn’t go out and pick up on my own.  It is loaded with your standard B-Movie goodness, cheesiness and quirkiness.  It does have that low-budget production feel that all films of this caliber often have.

When it comes to the releases that Olive Films have to offer, I was a little disappointed with the visual representation this release had.  Most times, they offer a crystal clear, pristine experience as they often go through the remastering process; however this film didn’t really live up to the experiences that I’ve had with earlier releases from Olive.  This release felt as if I were watching a VHS as opposed to a Blu-ray.

Like I had said, this film and experience certainly wasn’t my cup of tea; however if you’re into the Cult Classic genre, then it certainly is worth checking out.  Mankillers is available now from Amazon!