The newest Collector’s Edition from Scream Factory takes us way back to 1986 with our first encounter with the now legendary Hannibal Lecktor (spelling unique to this film; typically it is Lecter). Many seem to have missed this film; perhaps it is unsurprising that it was  completely overlooked, as this universe didn’t return to the screen until The Silence of the Lambs (with Anthony Hopkins replacing Brian Cox in the Hannibal role). Scream Factory has decided it’s time that this psychological thriller be rediscovered, but is it worth rediscovering? Take a big bloody bite out of your favorite meat and find out as I dive into Michael Mann’s Manhunter.

My experience with the films of Michael Mann is actually very limited; I’ve seen Heat (which is great) and Public Enemies (which I thought was not so great), so my expectations going into Manhunter were pretty much nonexistent. Really, I think I just wanted a cool Hannibal film, but what I got instead was one of the most enthralling police procedural serial killer films I have ever seen. Let me just simmer down some expectations right now if this is your first outing with Manhunter; this is not a Hannibal movie. Sure, Hannibal is involved in the plot to some degree, but really only as a catalyst to further the mental anguish going on in our flawed protagonist’s head. Comparing this film to other films in the Thomas Harris “Hannibal” universe doesn’t seem necessary, so I’ve chosen to look at this as its own separate entity. Therefore, there will be no (further) mention of The Silence of the Lambs, the absolutely stellar Hannibal TV series, or any other Hannibal film property in this review going forward.

Based on the Thomas Harris novel Red Dragon, Manhunter tells the story of FBI profiler Will Graham (William Petersen of CSI fame) as he’s pulled out of early retirement to help catch “The Tooth Fairy” – a serial killer who targets entire families. We learn that Graham chose to leave his successful career early after he caught Hannibal, and was almost killed in the process. Will Graham also has a problem with getting too far into the heads of the psychopaths he is required to track down, causing his sanity to always walk a razor-thin line. With two dead families so far and a definite 3rd on the way, Graham is forced to ask his former adversary (and brilliant cannibal psychopath), Hannibal (Brian Cox), for his opinion on The Tooth Fairy. This puts Will in the middle of a game between two serial killers as his sanity is put to the test for possibly the very last time. It’s a wild ride, complete with a wonderful 80’s vibe throughout, an awesome soundtrack & score, some beautiful shot composition, a fleshed out world, and interesting characters played by a great cast featuring Stephen Lang (Avatar), Tom Noonan (Heat & The House of the Devil), Joan Allen (Face/Off & The Bourne Series), and Dennis Farina (Get Shorty & Snatch). Manhunter is a serial killer thriller at the absolute top of its game.

This Scream Factory Collector’s Edition comes with both the original Theatrical Cut and the unrated Director’s Cut. I dove right into the film with a viewing of the director’s cut, which I think was a big mistake. The pacing of this cut of the film just felt off, especially with the addition of standard definition inserts for the directors cut sequences. It was jarring; all of these scenes seemed to really slow the film down, and led to some incredibly awkward cuts. After a back-to-back viewing of both cuts, I can easily say skip the director’s cut and watch the theatrical version, at least for the first time; it’s a much tighter film and moves at a brisk pace that ratchets up the tension in a very natural yet satisfying way. Had I jumped right into Manhunter with a viewing of the theatrical cut this would of easily be a 5/5 thriller for me, but we’ll go ahead and knock .5 off because that Directors Cut does muck things up a bit.

Easily the most disappointing aspect of this Collector’s Edition release of Manhunter is that no new transfer of the film was done; instead, the transfer is from the original MGM release. While this transfer of the film is completely serviceable, I can’t help but imagine what a new 2K or 4K transfer would look like. Manhunter is an absolutely lovely film to look at, thanks in no small part to longtime Michael Mann collaborator and director of photography, Dante Spinotti. The use of color and shadow was almost distracting at some points because the movie is just so cool to look at it. Manhunter is also filled with some extremely gorgeous shot composition that truly needs to be seen in action to be fully appreciated. Spinotti has created a gritty and realistic world that always seems to teeter on the edge of surreal, just as Will Graham teeters on the edge of sanity.

Presented in DTS-HD 5.1, Manhunter‘s sound mix is actually one of the better mixes I’ve heard on a Blu-ray release in quite some time. A major issue I find with audio on many releases is constantly having to adjust volume between music or action sequences and scenes of primarily dialogue; Manhunter was all but free of this issue. Action sequences sounded intense, dialogue was audible and very rarely needed adjustment, and the music sounded wonderful. As psychological thriller, the sound used during the film is more subdued than a lot of other films. What really puts Manhunter above and beyond in the sound department in the music accompanying the film. Manhunter has a great score made up of classic 80’s synth and guitar composed by Michel Rubini, as well as some great soundtrack songs from Red 7 and Shriekback made for the film. Fans of the music will be very glad to know Scream Factory has included a brand new featurette on the music of the film, featuring interviews with Rubini and members of the bands who provided the movie.

Once again, Scream Factory has knocked it out of the park in the features and packaging department. Their offering here is one of the best newly commissioned artworks so far on the slipcover, with reversible art on the sleeve.  The two Blu-ray Discs feature Will Graham and Hannibal respectively, and there is a cornucopia of special features to dive into on each disc. It’s as complete a package as this film can get, and whether this film is an old favorite or something you’re discovering for the first time, you will easily be able to appreciate the effort Scream Factory has put in. 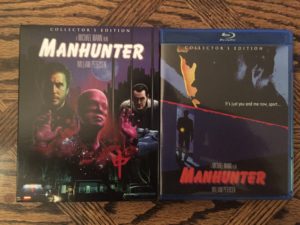 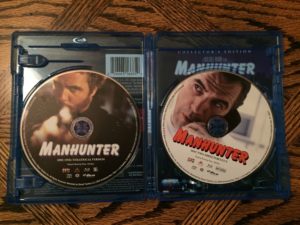 Disc one, which includes the theatrical cut of the film, is also where Scream Factory has added the newest features made for this release. Along with the aforementioned featurette, “The Music of Manhunter”, the other brand new feature here is “The Making of Manhunter,” a series of in-depth interviews with William Petersen, Joan Allen, Tom Noonan, and director of photography Dante Spinotti. These are lengthy interviews, providing numerous insights and stories from the making of the film from each person. William Petersen in particular has some fun stories from the set, and details being given the lead in Manhunter from director Michael Mann. Cinephiles will truly appreciate the 35 minute interview with Dante Spinotti, as it provides essential context for the shot composition used in the film. It’s truly fascinating stuff. “The First Lecktor: An Interview with Brian Cox” is also included on disc one. It is a 40 minute interview about his feelings on being the first actor to portray the legendary Hannibal. Rounding out disc one is a stills gallery and theatrical trailer.

Disc two houses two versions of the director’s cut of the film: a fully standard definition version and the high definition version with standard definition inserts. The director’s cut is also the version of the film that includes the commentary track by Michael Mann, our only insight from the director himself on this release. Disc two also includes two archival featurettes from the original release: “Inside Manhunter,” a featuring interviews with Cox, Petersen, Allen, and Noonan, and “The Manhunter Look,” another peek through the eyes of Dante Spinotti. These archive features are a nice addition, but do retread some of the things covered with the new features. Still, the inclusion of these is the right thing to do for a definitive edition of the film.

Manhunter has immediately jumped up into my list of favorite movies, and is one that I’m sorely disappointed I’ve missed out on for so long. It’s a dark and bizarre film that leaves you feeling uneasy as it moves along. Will it be your new favorite Hannibal movie? Perhaps. Brian Cox is stellar in the role, and it does make you wish we had seen more of his work as the character. The theatrical version of Manhunter works on every level it tries to achieve and is a worthy watch to anyone looking for a good thiller. I highly recommend this Scream Factory release specifically as the end all be all release for Manhunter. It deserves a spot on any collectors shelf, not just because of the work Scream Factory has put into the Collector’s Edition, but because it may very well be the best damn movie in the Scream Factory line up in this author’s opinion.