American audiences love their survival stories. They don’t care if you’re stranded on an island, on Mars, or at wits end in the middle of the ocean. The characters in these stories typically overcome the most extreme of odds in an attempt to see their family, or accomplish a goal, embodying the kind of person we all want to be in our own lives. Man in the Wilderness, a story of a man who is mauled by a bear and left for dead in the wilderness, is one of those classic stories of human triumph. 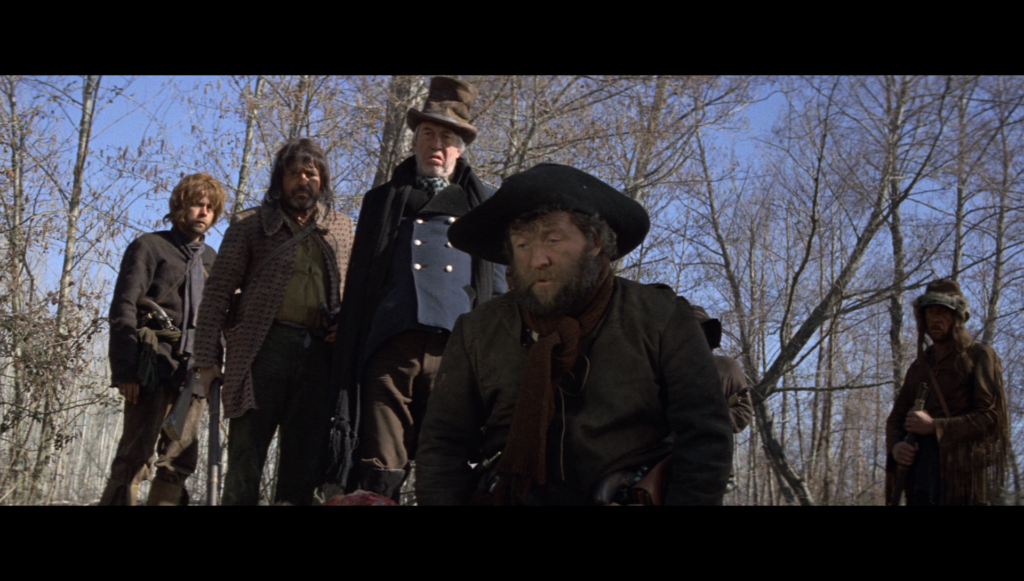 The film follows a loose adaptation of the real life story of frontiersman Hugh Glass, who was in real life mauled by a grizzly bear and left for dead. In our story, we follow the frontiersman Zach Brass, as he travels with a fur trapping country through the Northwest United States. While taking a younger, less experienced member of the crew hunting for meat, he is mauled by a grizzly bear and nearly killed. After deciding that the weather and threat of Natives is too great a risk, their leader, Captain Henry, orders all but two of them to move on. The two are to remain until he dies to bury him, but they end up deserting him when the threat of Natives gets too great. Still alive, and spurred on by the memories of his childhood and of the child he’s left behind with a young wife, Zach is spurred on to survive his grave injuries, using all of his acquired skills to ensure that he finds his peers. 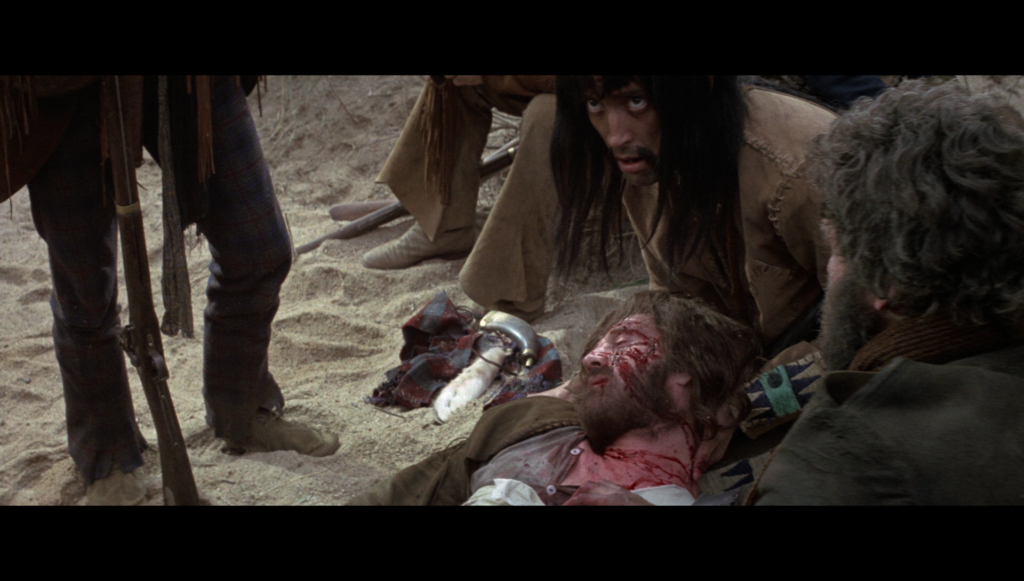 If this story sounds at all familiar, it’s because it was recently brought back to the big screen by director Alejandro Gonzalez Inarritu and actor Leonardo Dicaprio in their 2015 movie The Revenant. Whereas that story is a brooding, tense film about one man’s desire to get vengeance on the men who wronged him in a quest for fur profits, Man in the Wilderness takes a bit of a different path. Told through a mix of flashbacks, we get a distinctly different flavor of our lead character. In this movie, he’s painted as a man who’s always struggled to survive, fighting against the teachings of the church, and later fighting to make it home to his infant son, whom he has yet to meet. The Revenant’s main character, in contrast, is an angrier, vicious man, whose sole goal is to kill the men who left him behind after brutally murdering his son.

Running in parallel to Brass’s survival plot, is the story of Captain Henry, played by the ever stubborn and curmudgeonly John Huston, and his men, as he drives them onwards back to civilization with a large boat and a shipment of beaver pelts. In an effort to save the last remnants of his former command, he burdens his men with carrying the large boat over land, slowing them down considerably in their attempt to escape the natives. This, along with the fear that Brass is coming to get them, slowly poisons the morale of the crew, and slowly seeds dissent amongst them throughout the film, culminating in a rather thought provoking ending that pushes for a more pacifist resolution than other westerns of this kind. 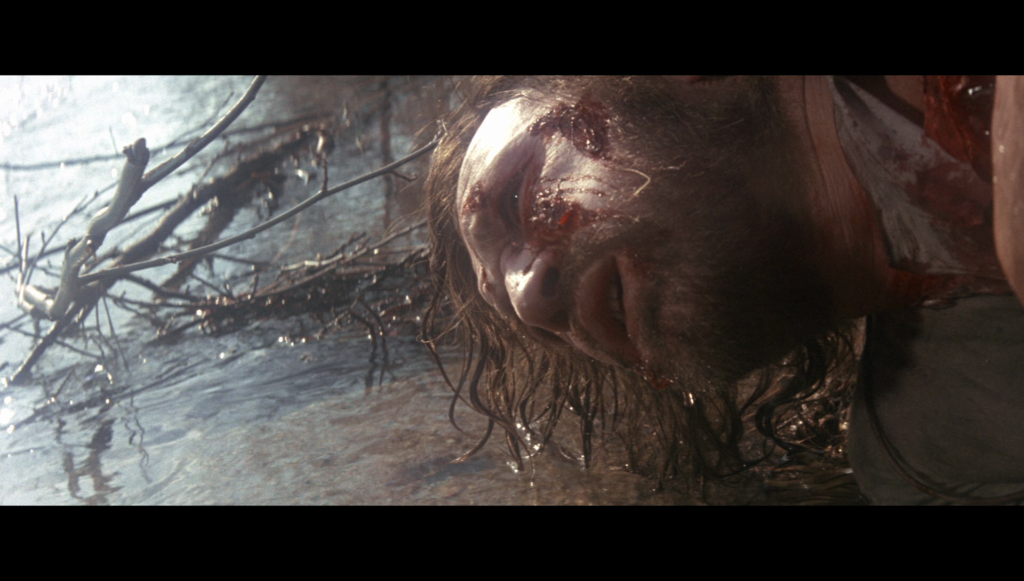 Man in the Wilderness is a less aggressive, fast paced, and ultimately less violent version of the big screen epic that took home a couple Oscars at this past year’s ceremony. It packs in some excellent action, and less brutal, but no less convincing version of the bear attack that captivated audiences, with a fantastic display of practical effects, costume design, and makeup. The film’s score, composed by Johnny Harris, is triumphant in a 70s way, and just barely over the top in the best way. The film’s theme is fantastic, and worth indulging in on its own. Man in the Wilderness may seem tame to diehard fans of Innaritu’s brutal adaptation of the story, but it stands tall on its own, with a decidedly less terrifying presentation of the same story.

Shot on 4-perf 35mm film with Panavision anamorphic lenses, Man in the Wilderness was shown in theaters using the 2.35:1 aspect ratio. Restored by Warner Archive for home video, the film is presented in 1080p, maintaining the original 2.35:1 aspect ratio.

I have a crippling soft spot for 60s and 70s Panavision lenses. They have this beautiful shallow depth of field and softness to them that give the image such a light and stylized look that’s unbeatable. Combined with the film’s used of on location shooting and push for natural film lighting, Man in the Wilderness looks fantastic on Blu-ray. The film carries a lovely layer of natural film grain that never becomes aggressive, and while the majority of the film falls into the softer range of the spectrum, close ups of Brass and the various other characters reveal excellent detail. Color is muted due to the setting, but is rock solid through the film’s runtime. It will never be as sharp or well defined as its young brother The Revenant, but Man in the Wilderness looks excellent in 1080p.

Man in the Wilderness was released in the era where stereo sound-on-film was just starting to become a thing. As a result, it was produced in mono, which has been recreated faithfully here in DTS-Master Audio 2.0 sound. 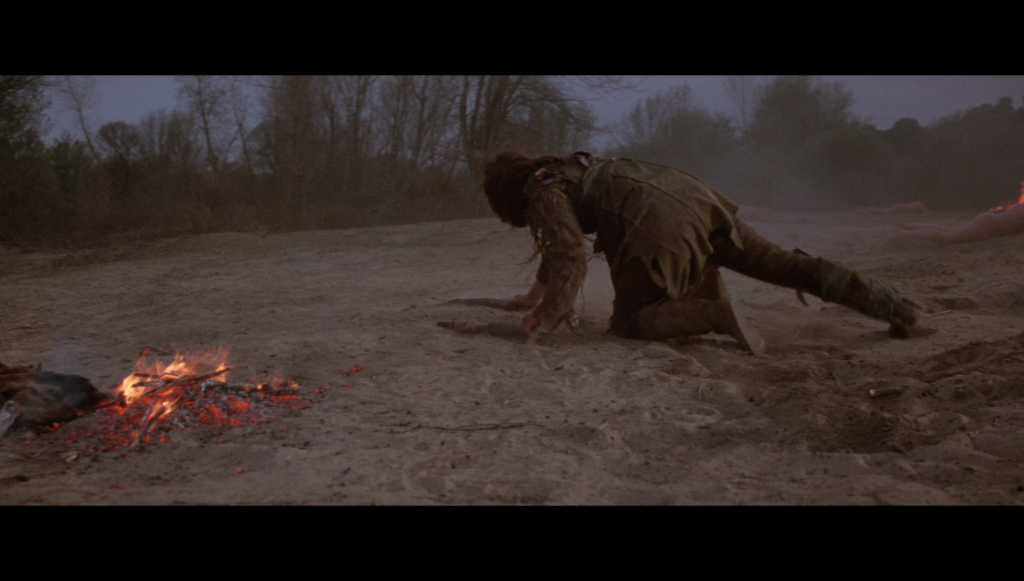 Man in the Wilderness is a pretty flat sounding movie, even during the major battle scenes and the bear attack, which traces back to the film’s original recordings. The film’s triumphant theme is carried through nice and clear, and sound effects and dialogue are presented without any issue. The track is clean, but antiquated.

Man in the Wilderness, released to Blu-ray by Warner Archive as part of their Manufactured-On-Demand series of Blu-ray, is packaged in a standard blue keepcase. The front artwork features a colorful action shot of Richard Harris as Zach Brass wielding his spear, with the film’s titles and the standard Warner Archive banner. The back artwork feature a few shots from the film set against a different photo of Zach Brass wielding his spear, as well as a few paragraphs about the film, credits, and technical specifications. Pleasing, but minimal, in standard Warner Archive fashion. 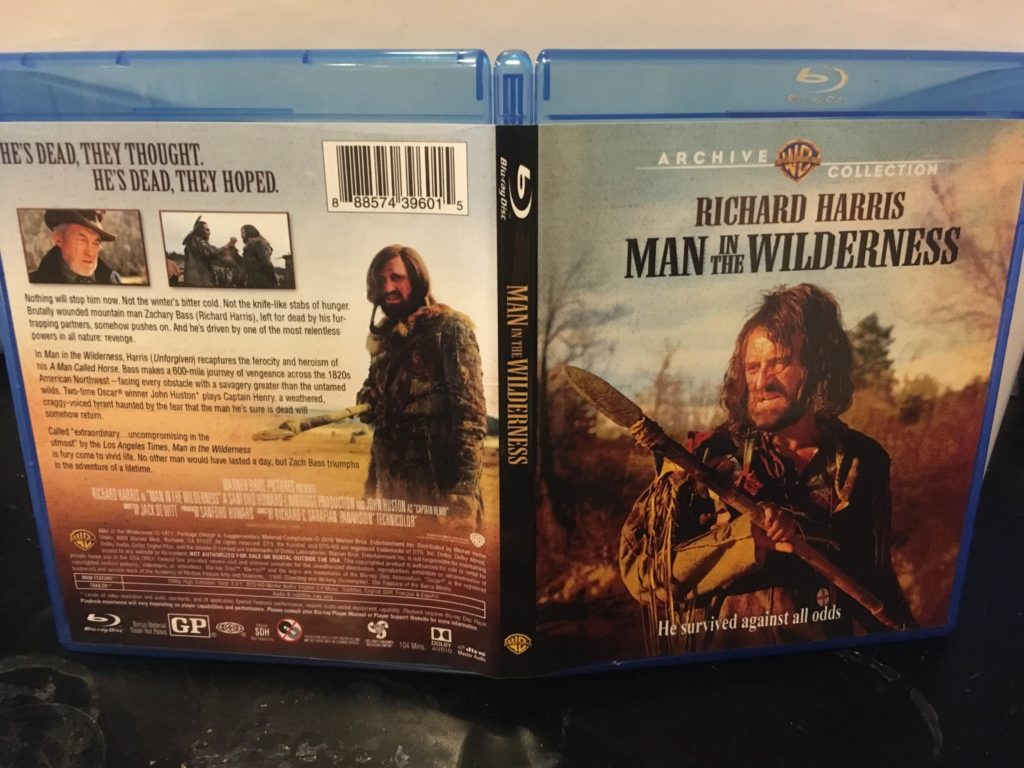 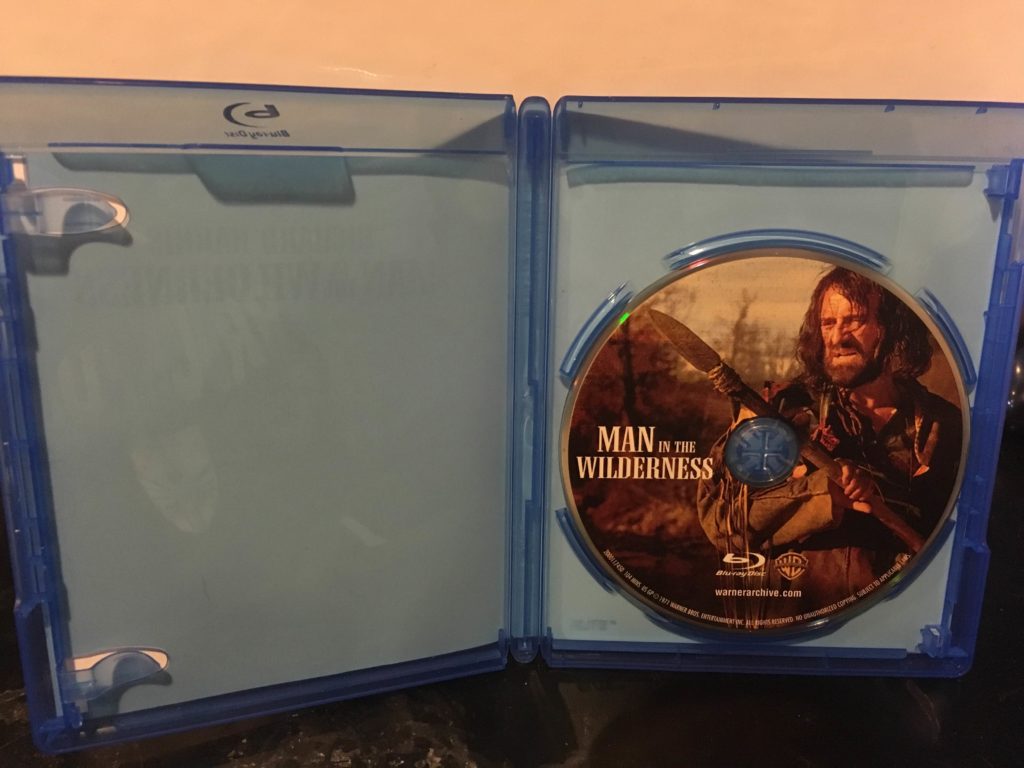 As for features, the disc only contains the film’s theatrical trailer, and no other features. Consider this one a barebones release in that regard. 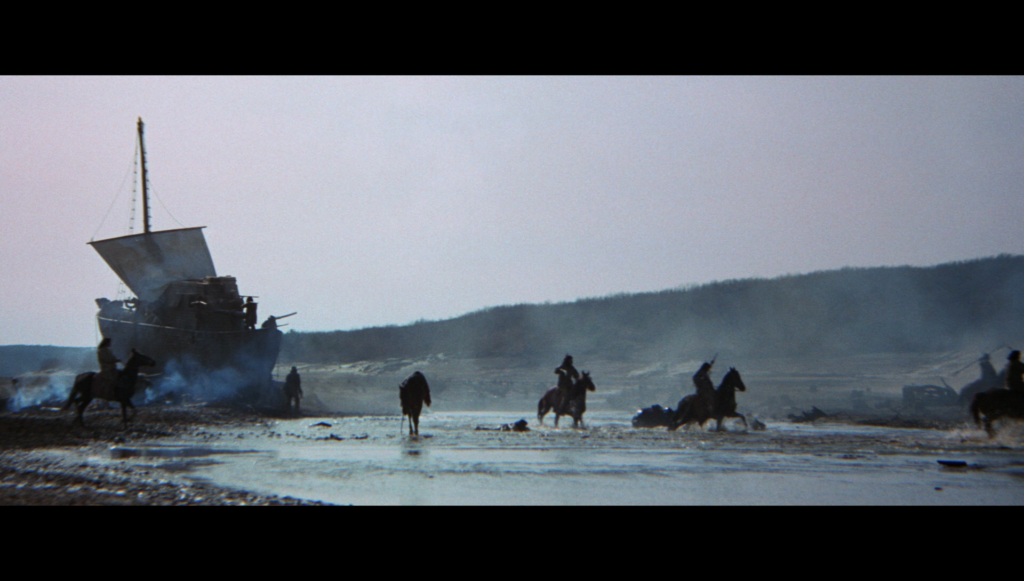 Man in the Wilderness has brief moments of intensity, but feels rather light on its feet, moving faster and less aggressively towards its climax than other films of its nature. The story is less about Brass, and more of a classic western civilized man vs. Natives sort of story, but is no less effective at characterizing Brass, played with determination and confidence by Richard Harris. The film’s Blu-ray features an excellent visual presentation, coupled with a limited mono soundtrack, and decent packaging. The lack of significant extras is a shame, but overall I feel this definitely a film worth owning. Recommended.

Note: this Blu-ray is manufactured on demand, and can be ordered through Amazon or the Warner Archive Shop located HERE.