The Man Who Fell To Earth was the late David Bowie’s first starring role in a film, and he was the perfect man for the job. Everyone is familiar with Bowie’s “otherworldly” persona, so to play an alien who transports down to Earth was no far stretch. The film is full of strange moments, visuals, and acting, and it is truly one that I think everyone should see at some point in their lives, for better or worse. It will certainly divide viewers, and I am sure that the same amount of people who love it are matched by those who cannot sit through it. It is a bit long, at two hours and fifteen minutes, and it can be slow at time. Pacing is definitely an issue, but for Bowie fans, these two hours are just a reminder of his brilliance. 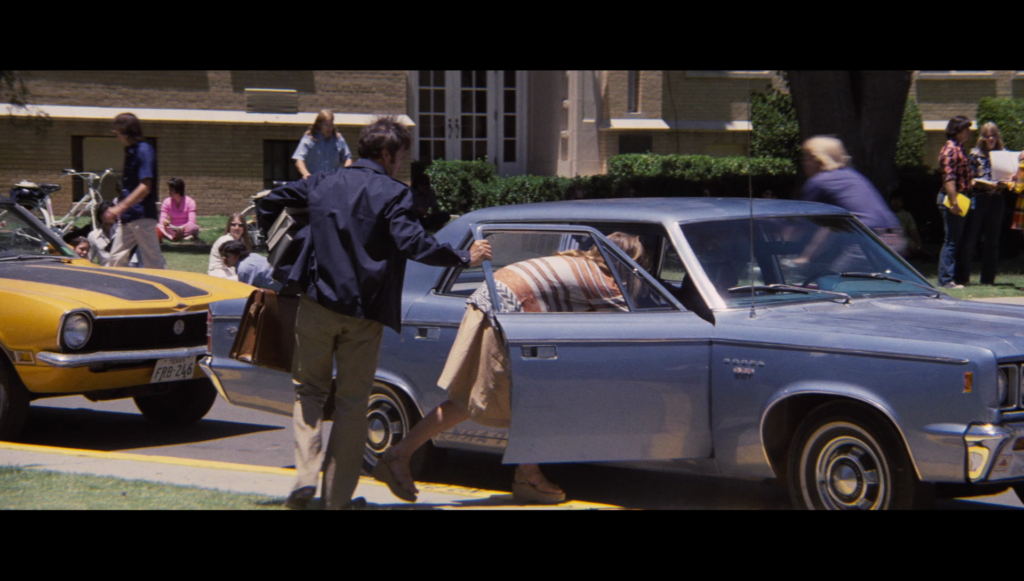 The Man Who Fell To Earth hits on many themes, like loneliness and the struggle to fit in, environmental issues, and even back in 1976, it speaks to many problems in our current world. The commentary on the world, which seems to always be prevalent in films featuring aliens, is the same pretty standard stuff. However, Bowie steals the show. He is incredible in the lead role. That being said, this review will focus more on the quality of this release, as compared to the rare and infamous out of print Criterion Blu-ray.

StudioCanal released The Man Who Fell To Earth in theater late last year, promoting a new 4K transfer from source materials. Lionsgate distributed the set in the US, but it is hard to find any decent details on the transfer on either of their press pages. This seems strange, until you see the final product. This is, by far, the worst 4K remaster I have seen come to Blu-ray. I am not sure what the source materials were like, which can drastically change how a remaster looks, but comparing to Criterion screenshots online, this release does not stand up to the much older Criterion transfer. 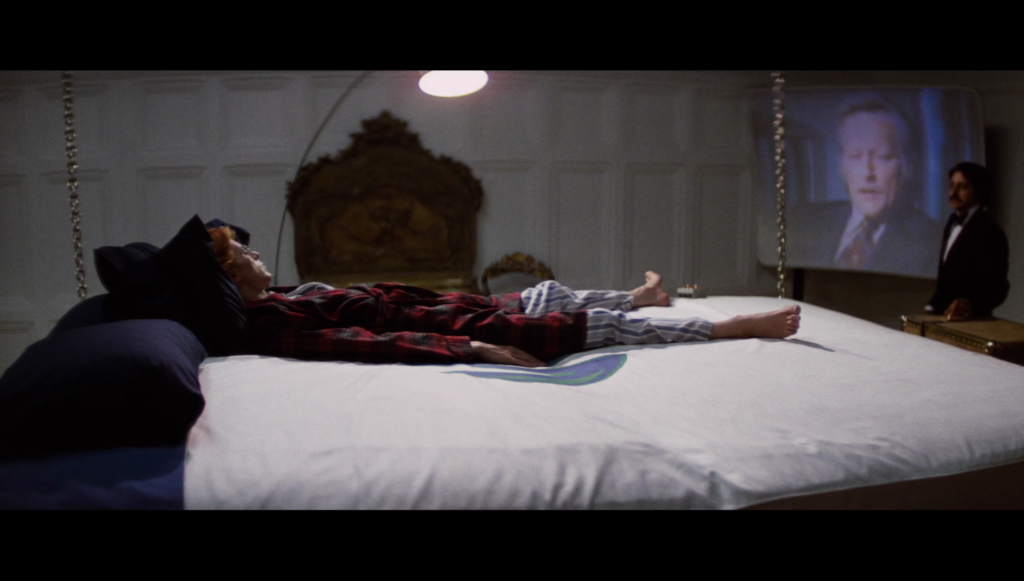 Grain is heavy, which is standard for a film from this era, so that is not my complaint. Rather, there is just no defined detail or any marked improvements over previous iterations of the film. Everything seems colored wrongly, and the yellow tint is distracting and not consistent. I firmly believe that not much effort went into this transfer, and it was rushed into production following Bowie’s death to capitalize on the publicity.

The audio is the only highlight to this release, and the DTS-HD Master Audio 2.0 track is a nice addition. It sounds roughly the same as the previous Criterion release, which was an PCM 2.0, and there is not much to say in comparison. The dialogue is clean and clear, and there are no ill effects on the audio track by any means. It is a well sounding Blu-ray, nothing spectacular, but good enough for a film from this time period. Make sure you have some nice towers or left and right fronts to get the best experience, but you could probably slide by with a simple soundbar setup, or even some decent TV speakers. 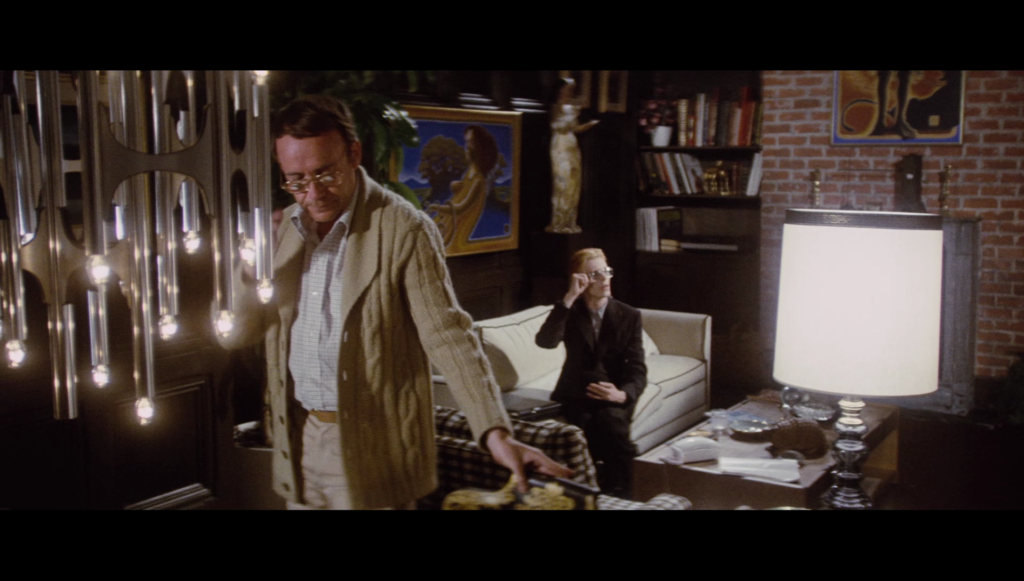 Of all the things to review with this release, the packaging and features are the biggest disappointment. For starters, the copy I had shipped to me was ruined, as the exterior box is made of a very flimsy cardboard. Much of the package was bent out of shape, and the way the release was designed, as a digipack, was terrible. There is a flimsy cardboard spacer inside the slipcase, which is only there to hold the bonus materials, which are not the same size as the box and thus require the extra spacing. The cardboard spacer was bent out of shape, and looked terrible on a shelf because of that. 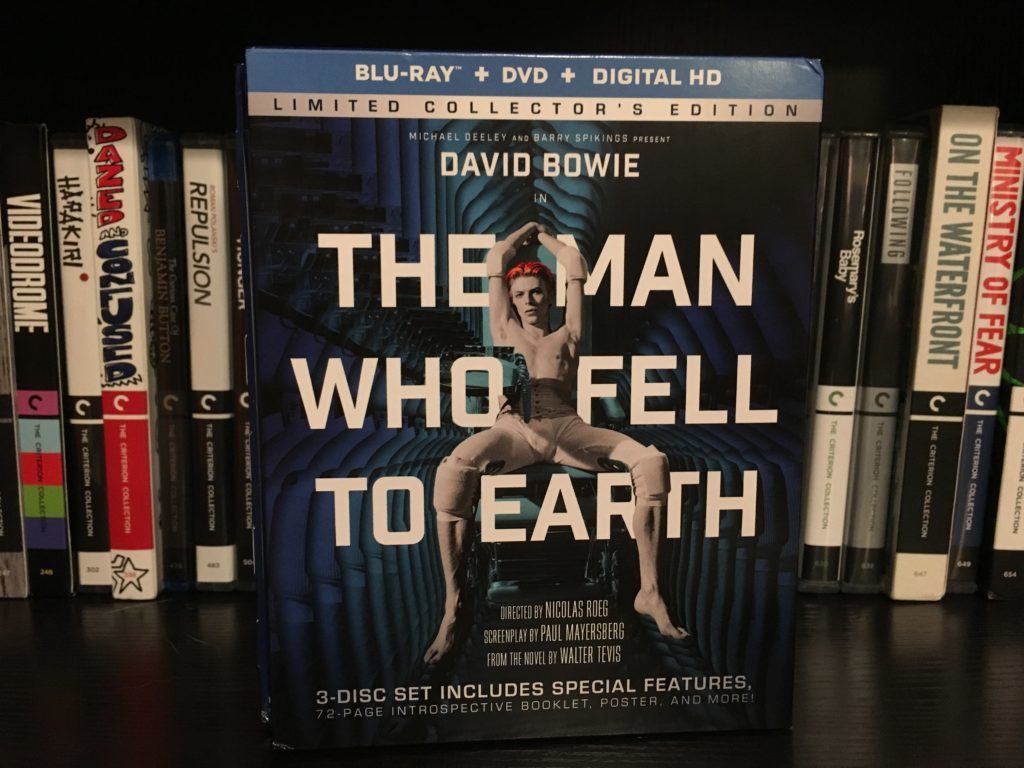 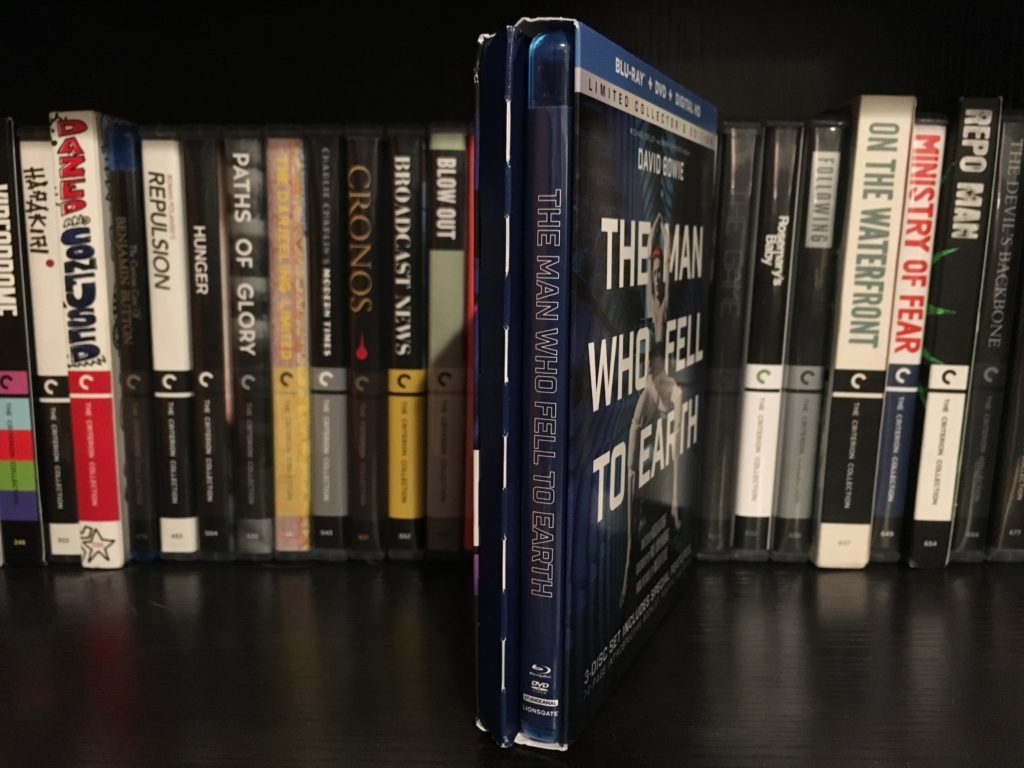 Inside the slipcase were the bonus materials, which include art cards, a booklet, and a small poster from the re-release of the film to theaters last year. The materials were in good shape, even though the case was ruined, so that was good. Next to the bonus materials was the three-disc Blu-ray case, which featured a single Blu-ray and two DVDs. For a Limited Edition set, advertised as being three discs, I was surprised to see just one Blu-ray, which had the feature film and bonus features. The first DVD has only the feature film in SD, and the second DVD has the exact same bonus features as the Blu-ray. This makes no sense at all, and is really a huge let down. Why include all of the same features on the DVD? If someone is buying the Blu-ray release, why would they ever care about another disc full of DVD features, the same as on the Blu-ray? It is deceiving marketing from Lionsgate and StudioCanal, and really a reason not to buy this release. But wait; it gets worse. 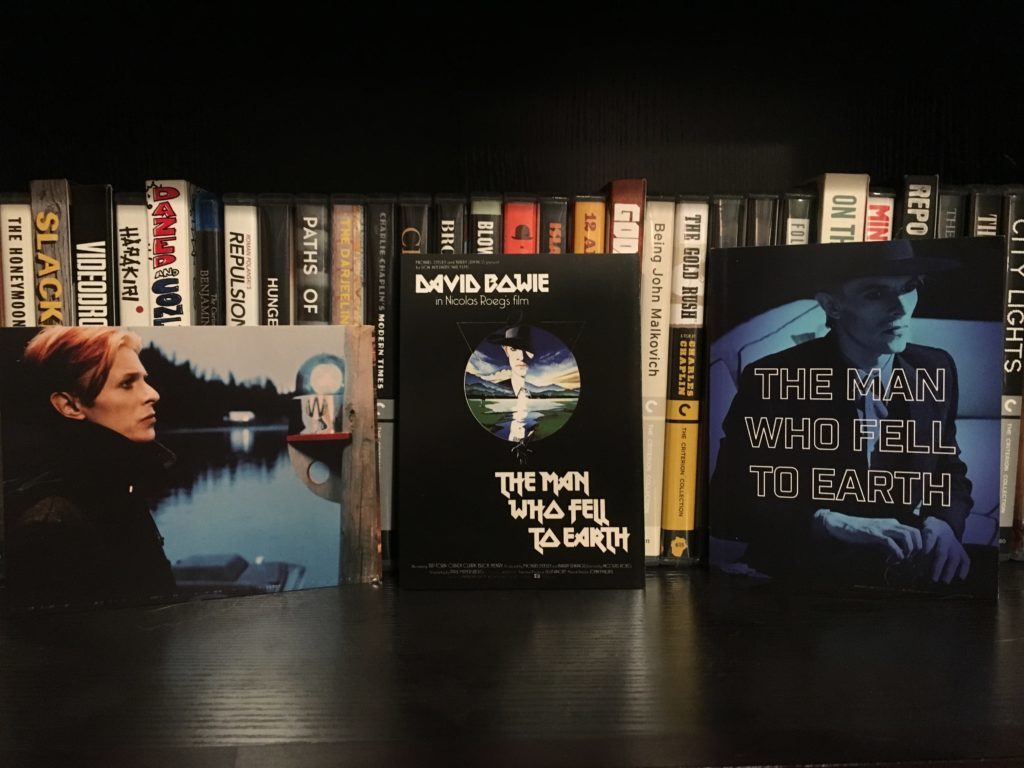 The features, which are available on both the Blu-ray and DVD, for those of us with our HDTVs and CRTs next to each other (we do have a writer like that, don’t laugh), are also lacking. Also, even worse than being duplicated, regardless of whether they are on the Blu-ray or DVD, they are ALL IN STANDARD DEFINITION. My real question is, did anyone even try with this release? It seems more and more like a poor attempt to jump on the Bowie sympathy train after his death, and it is a sad attempt at a premium release from a distributor like StudioCanal, which usually produces higher quality materials. Lionsgate is not necessarily known for premium quality, so they may get a pass, but StudioCanal really should be ashamed. 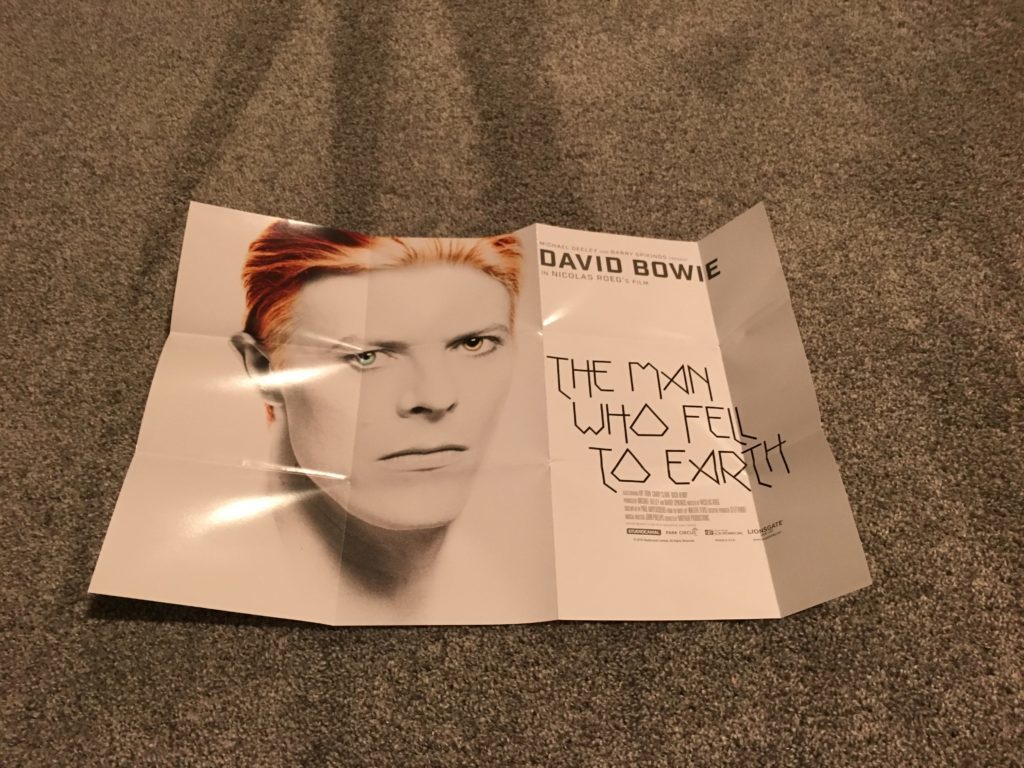 For those still interested, the features include a 2.5 hour interview with cast and crew, a 15 minute piece on the soundtrack, and an 8 minute interview with Bowie, as well as the trailer. That’s it, just those four things, which continues to make a “premium” release like this even worse. As Donald J. Trump would say, SAD! 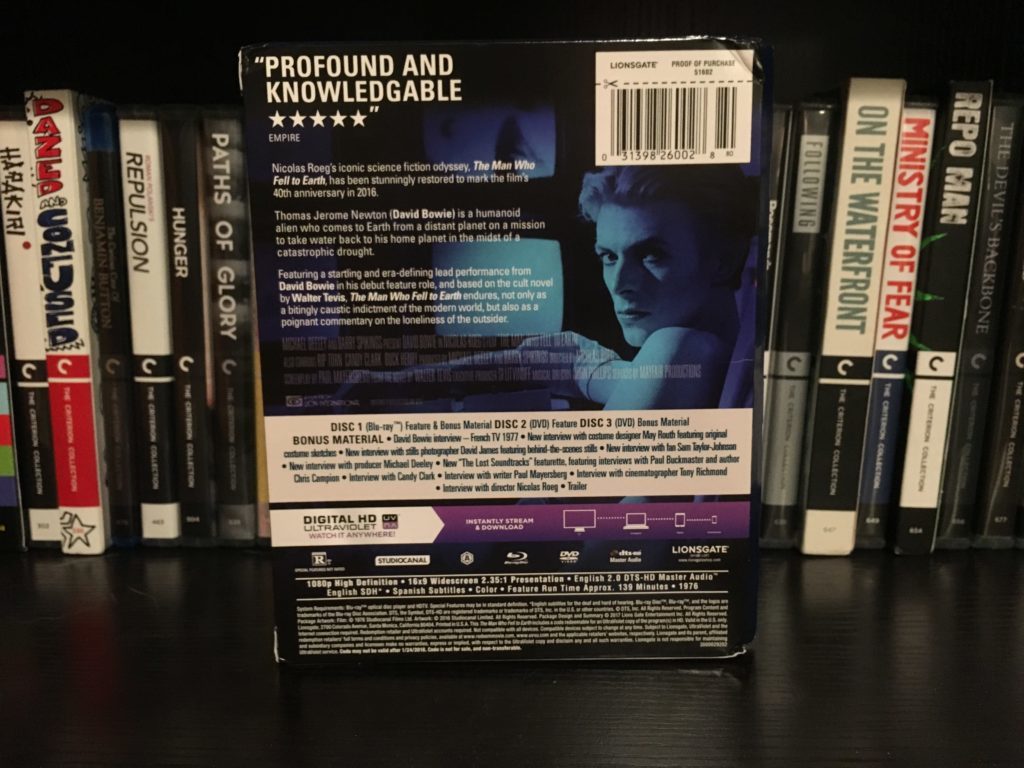 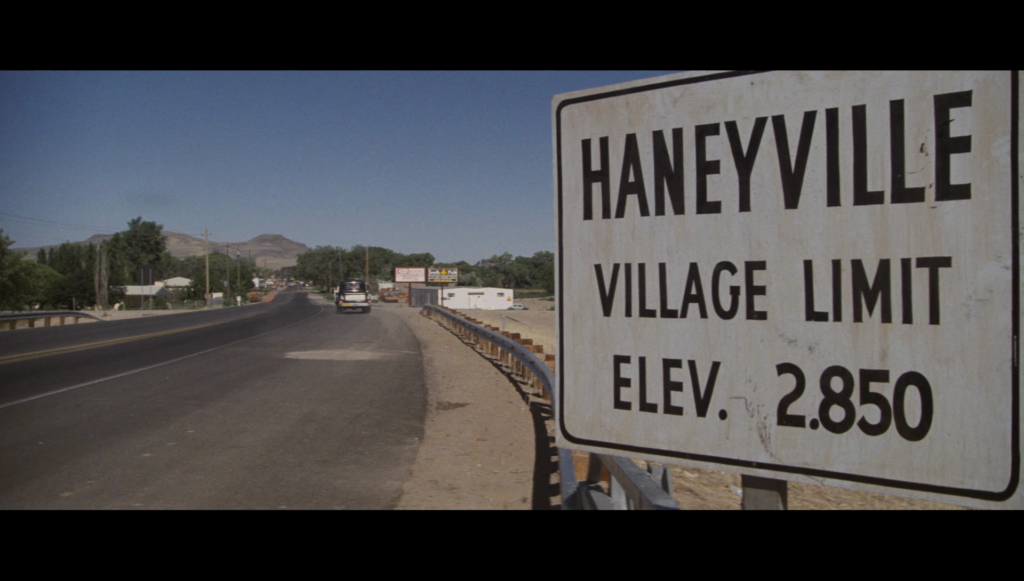 Simply based on the terrible packaging, subpar features, and poor visual transfer, I cannot recommend this Blu-ray release to anyone. If you have the means to buy the Criterion, which may come down in price with this newer release, I would suggest going that route. If you have never seen the film and want to give it a viewing, grab a digital copy online before wasting money for this release, which is really nothing more than clever marketing and a cash grab. It was clearly rushed into production, and is below average in almost every category. Over $30 at release, this is worth no more than $10, so please do not spend the full release day money; wait it out, and it will surely drop. You can find this release on Amazon, and if you really want to torture yourself, go ahead and buy one. I would suggest brick and mortar for this release because the package does not ship well, but I do not know how many retailers will carry it in store.