Mail Order Monster is a 2018 family sci-fi drama. The film was written and directed by Paulina Lagudi and Marc Prey wrote the screen play. The film stars Madison Horcher as Sam, a young nerd who lost her mother in a car accident, Josh Hopkins as Roy, Sam’s father who is trying to rebuild a family, Charisma Carpenter as Sidney, Roy’s new girlfriend who wants to be a part of the family, and Emma Rayne Lyle as P.J, Sam’s former friend who is now her bully at school. Mail Order Monster doesn’t bring much in the monster category, but it does deliver a heart warming story.

The story of the film follows Sam(Horcher), a very smart girl who is still trying to readjust to her mother being gone. School life for her is rough as P.J(Lyle) bullies her constantly with both physical and verbal abuse. Sam is also dealing with her father, Roy(Hopkins), wanting to rebuild a new family and move on from the tragedy with Sidney(Carpenter), a caring woman who just wants what is best for both Sam and Roy. Sam, unable to deal with these pressures decides to order a monster from the back of a comic book that Sidney gives her.

There is so much positive to talk about this film. First and foremost the cast works so well together. Horcher and Hopkins as Sam and Roy have amazing chemistry. Carpenter’s Sidney also comes across as real and caring, it really adds to the sweetness in this film as there are a lot of moments that are touching. Horcher especially deserves praise as her work with the other three actors is top notch and feels extremely real. Her work with MOM, the robotic monster she orders, is also very good and must have been difficult considering it was someone in a rubber suit. All four of the main actors are very good and really add to each scene. 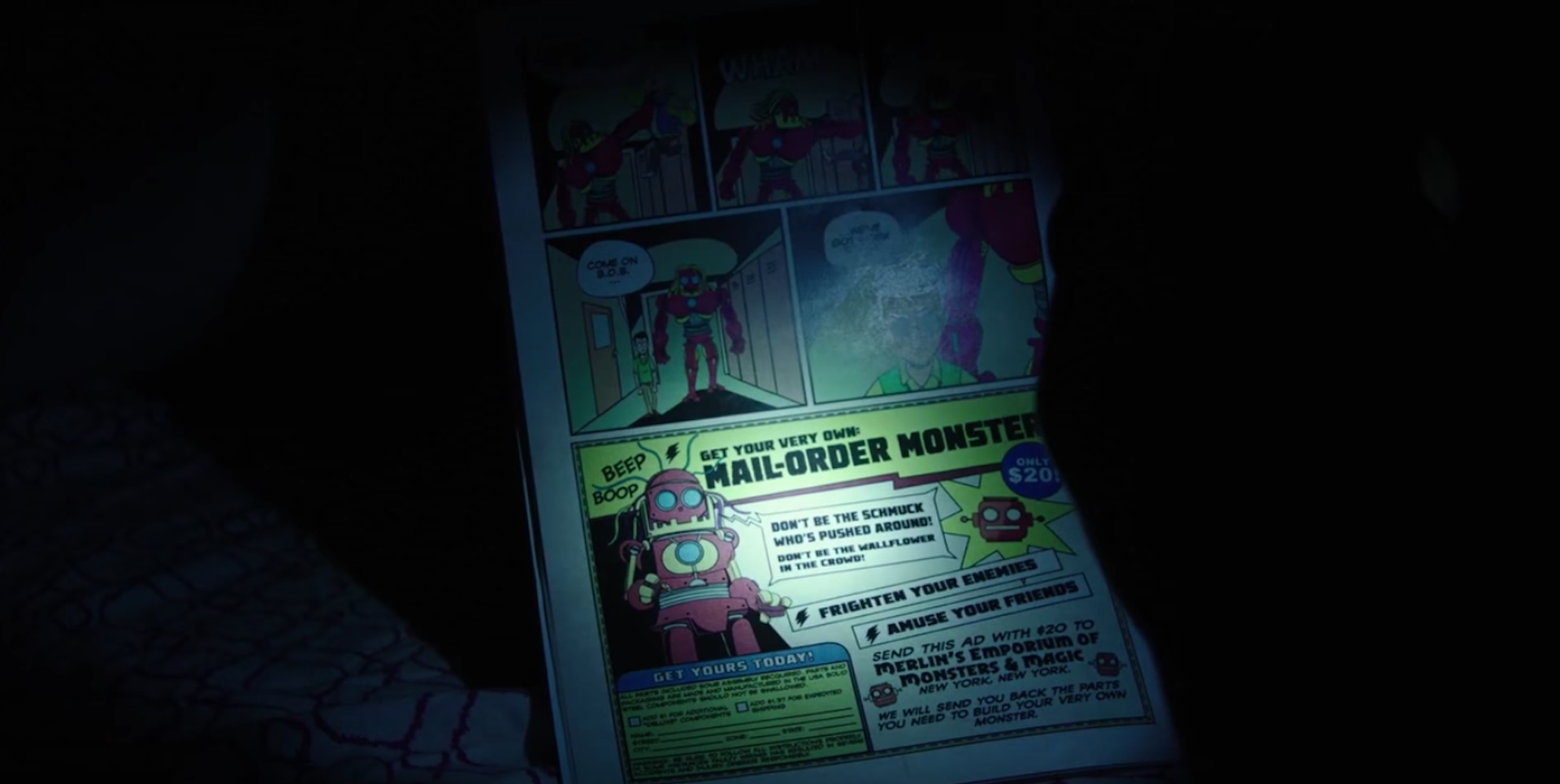 The monster, also known as MOM, looks pretty good. Obviously as a more family oriented film MOM isn’t a scary robot, but looks almost innocent. It reminds me of the Iron Giant. It has the ability to be scary, but isn’t unless it wants to be. It is covered in brighter colors, has bright blue eyes and even has dreadlocks like wires for hair. It does look a lot like a Power Rangers monster though. That isn’t necessarily a bad thing, but it does look like one.  An interesting twist the film takes with its special effects is right from the get go. The film has graphic novel like sequences cut throughout it. Usually these cuts appeared during flashbacks, but also traumatic scenes. The end, when a big fight could have been shown they went with the graphic novel look. It really works for this film and set it up to make sense when it appeared. The sparing usage made it kind of fresh to see when it was used. 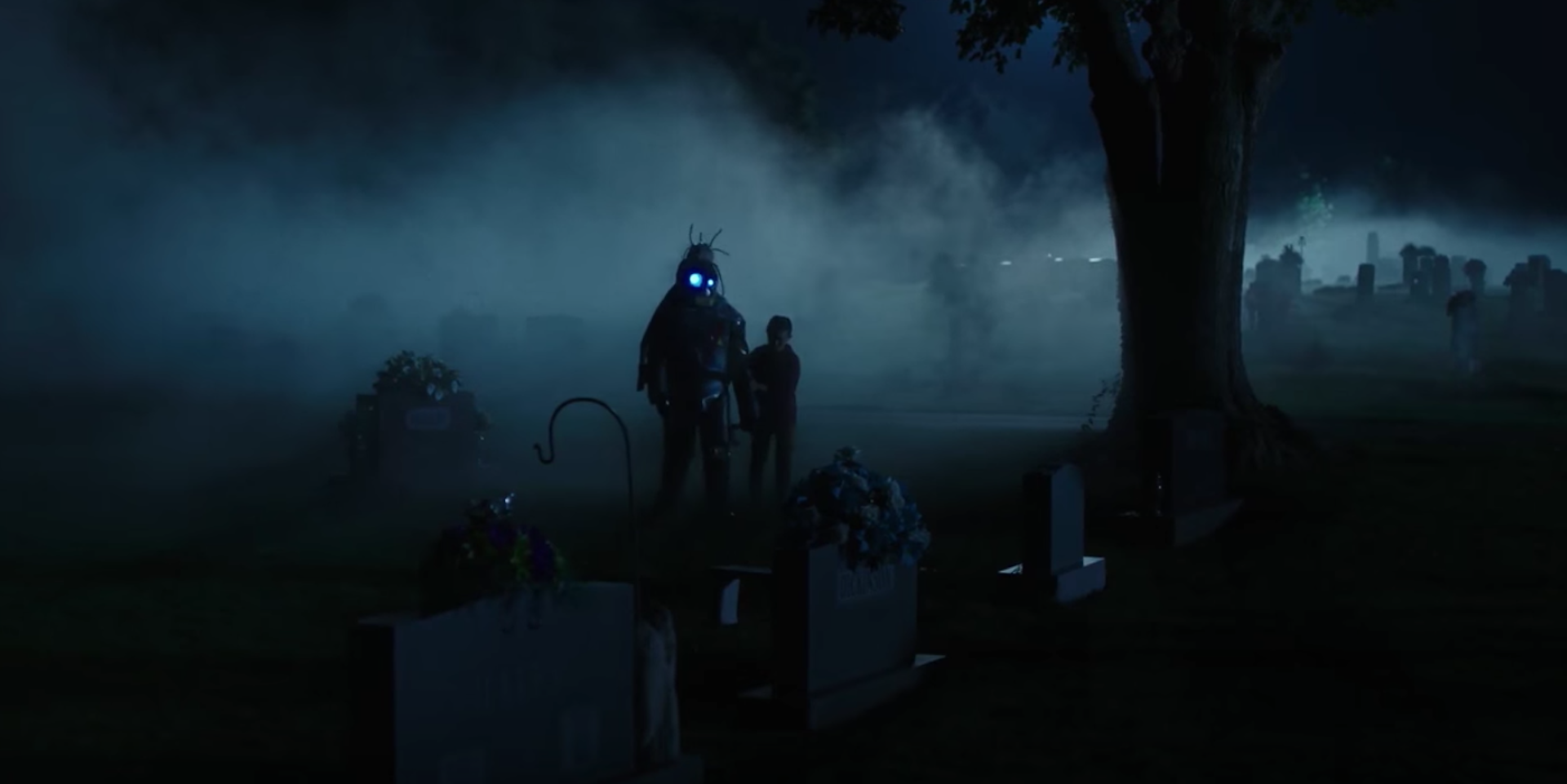 Some Extra Thoughts: Charisma Carpenter is the most recognizable person in this film, for me at least thanks to her Buffy years. They don’t show Sam’s mother much and usually only quick glances but she really looks nothing like the father. The story is good enough though that it doesn’t matter. No one feels dumb in this film, everyone feels like real people. It is really sweet. Also like how no one blames someone else, like feelings were hurt but they are still a family.

The audio quality is fine for the most part. Good use of music, most of the dialogue is good. The one glaring issue is MOM. She speaks with a metallic sounding effect, which makes sense but makes it hard to understand her a lot of the time. Some words are missed entirely and left trying to figure out by how Sam responds to her to see what she said. It isn’t all the time, but enough that it was distracting. Who sends robotic monsters to kids for twenty dollars? I would buy five.

Mail Order Monster is a really good family film. It hits some real moments even with the sci-fi elements. It has a message about being okay to move on, but not forgetting. It hits all the right spots to tell a sweet and heart warming story about love, loss and moving forward. The cast is great, the story is great and Mail Order Monster delivers.