George Miller opens up the new black and white version of his masterpiece Mad Max: Fury Road by telling us how his favorite version of Road Warrior was a rough black and white cut used to score the film. Fascinated with the look and feel of that film, he goes on to confirm that he believes Fury Road, in this new “Black and Chrome” edition, is also his favorite version of this latest effort. While noting that there are certain scenes where color helps tell a story, he says there are equally as many scenes which look fantastic in black and white. Miller had been vocal about this black and white version for a while, even pushing for an original theatrical release in the monochromatic color scheme. The color version is by far one of the best looking films of 2015, and so I was very interested to see how the “Black and Chrome” edition would stack up. 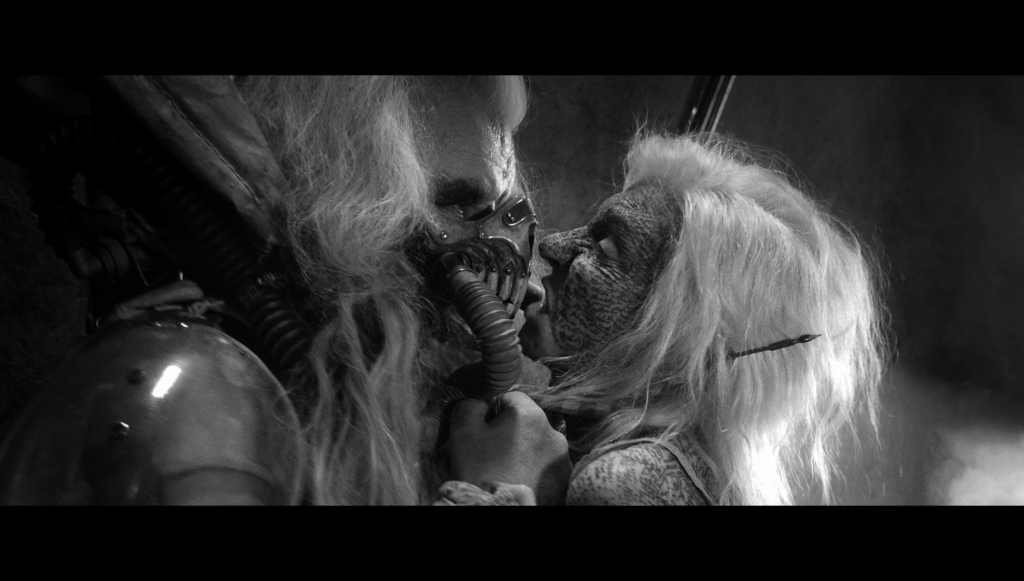 We have previously discussed the movie in our 4K review, so you can check that out here. For me, it was my favorite film of 2015 by far, and thus it is the easiest 5/5 that I have scored while writing for ReDVDit. Fury Road is essential viewing on any format, and it is a modern masterpiece of action packed cinema. 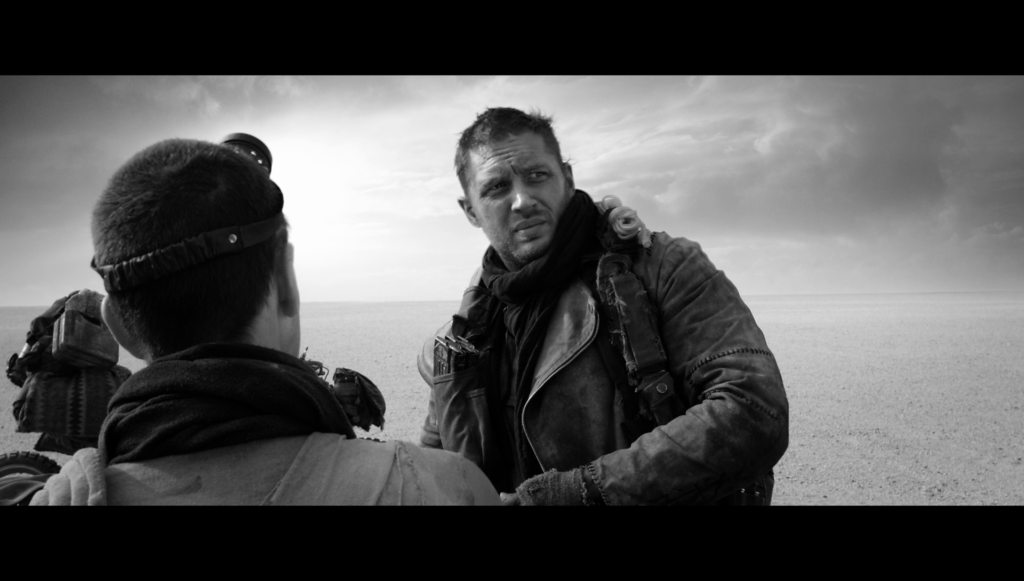 Immediately from the opening sequence, I was totally sold on the black and white version of Fury Road. There were things I had never noticed before, as with so much color, you can often be distracted as a viewer to the most prominent or vibrant item on the screen. The skin texture of the War Boys is even more striking, with every crack of their broken skin, scar, and sickly legion clearly shown in a way that color could not convey. Their white skin mixed with the darker, and more plainly obvious blemishes is one of the highlights; they look fantastic. Furiosa’s makeup also looks excellent, with the dark shadows over her eyes giving her an even more menacing look, while the white dresses of the wives stand out against the darker backdrop, making them look like a sort of heavenly figure against the barren landscape.

Of course, things like the fiery guitar player or the amazing sandstorm sequence near the start of the film are not as striking in black and white, but to the right person, they still offer a pleasing aesthetic. I have been fairly vocal in my support for black and white films on Blu-ray, as I believe some of the finest looking films have come to the format in the simplest of color schemes. Movies like Sin City, Good Night and Good Luck, or Schindler’s List are excellent Blu-ray release. Even older films like Psycho or Dr. Strangelove, when restored correctly from a solid source, look fantastic in HD. Mad Max: Fury Road looks more like Sin City than it does Psycho, as the picture is still very modern and smooth, although there is still a decent amount of grain to the image in some scenes; it all depends on how each sequence was shot. 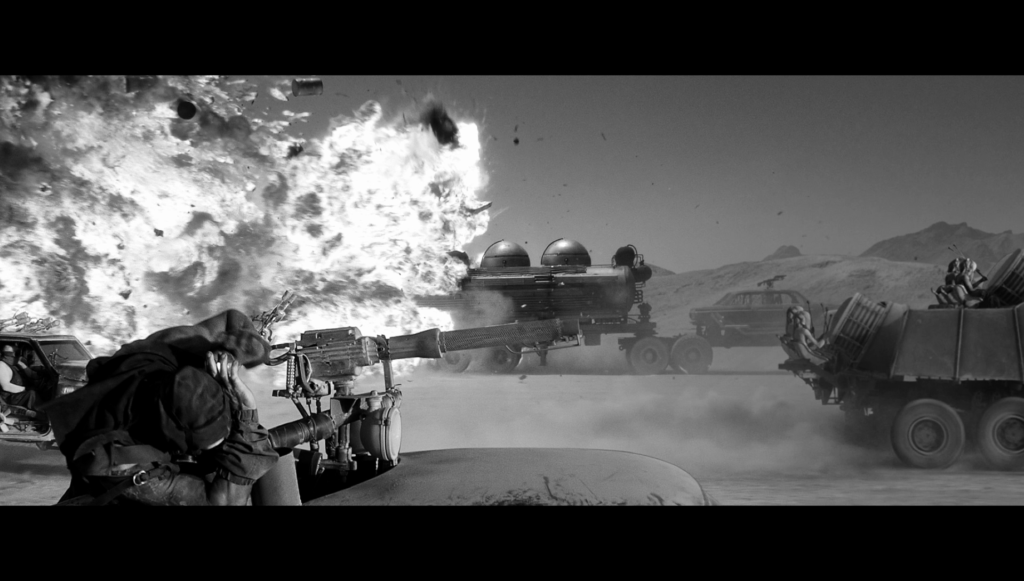 A lot of the appeal of this release will come down to personal preference, and so it will vary depending on the viewer. For me, this was a near perfect at-home experience. Take a look at some of the screenshots included here, sourced from the Blu-ray, and make your own decision. If you have an affinity for black and white movies, this release is a no-brainer; you will be very happy with the way it looks.

Mad Max: Fury Road “Black and Chrome” comes with the same excellent Dolby Atmos audio track (Dolby TrueHD 7.1 source) that was featured on the original Blu-ray release and subsequent 4K UHD release, and it is still one of my all-time favorites. However, I was really looking forward to a possible silent audio track, with only music driving the black and white image. This was something that had been talked about, but was apparently left out. With the limited dialogue already in the film, I thought a modern looking silent film experience would have been a fun one, but alas the option is not available. Of course, who can really complain when the audio is already so great – I’m just being picky. 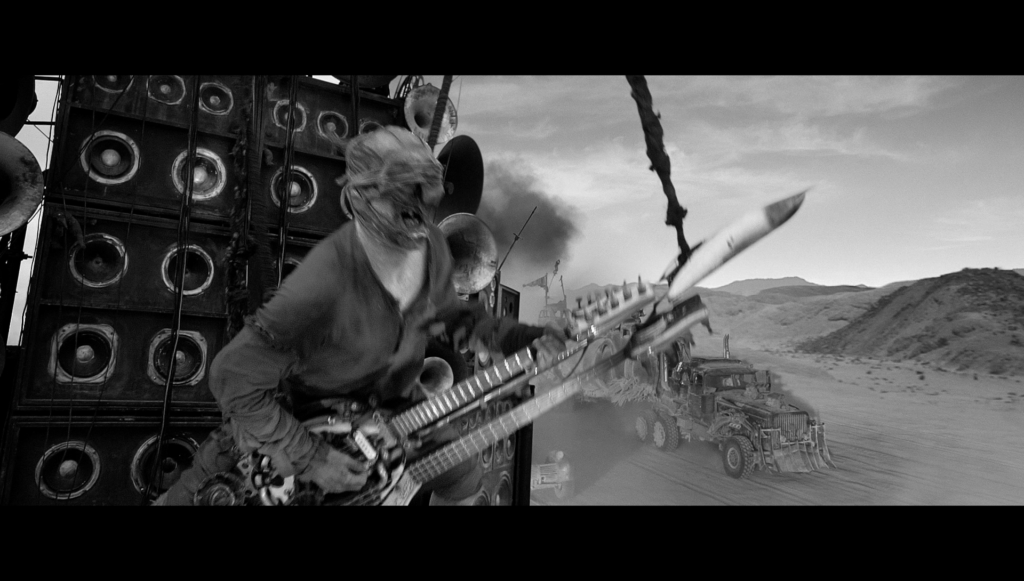 Mad Max: Fury Road “Black and Chrome” is a bit lackluster when it comes to features and packaging. The package is a standard two disc Amaray case, with no slipcover. Inside is a Blu-ray Disc featuring the theatrical release, with all of the same features ported over from the previous Blu-ray release. The second disc is the Black and Chrome version, with the only additional feature being an optional one minute introduction to the film by George Miller. There is no DVD and no digital copy included with this release. 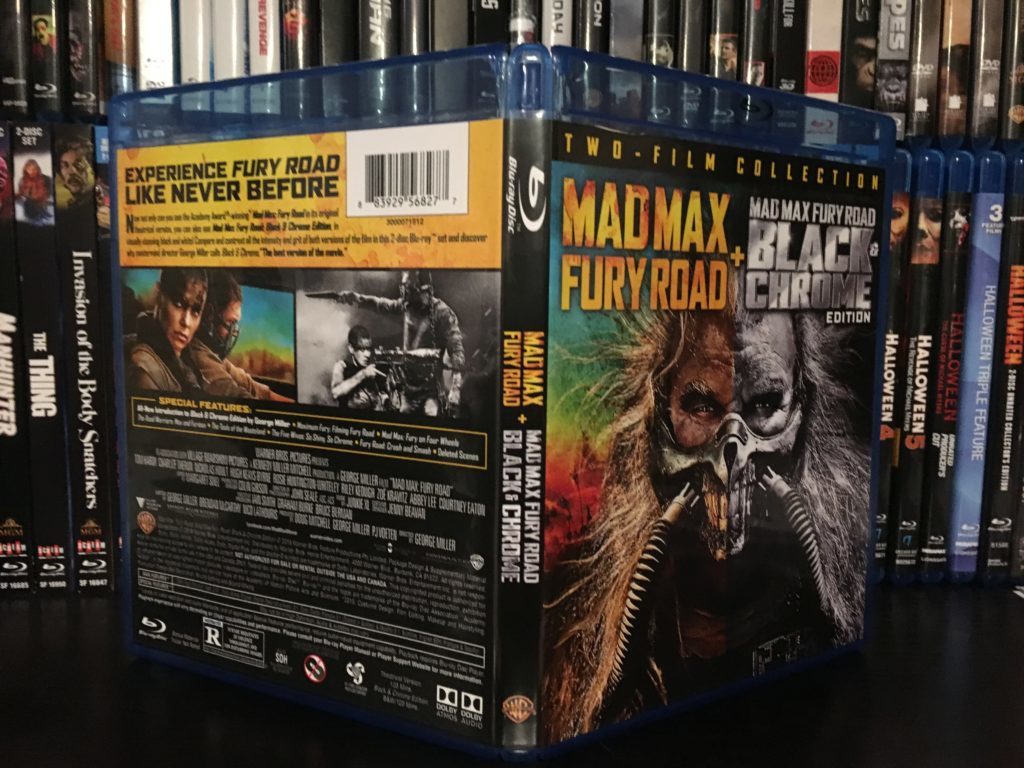 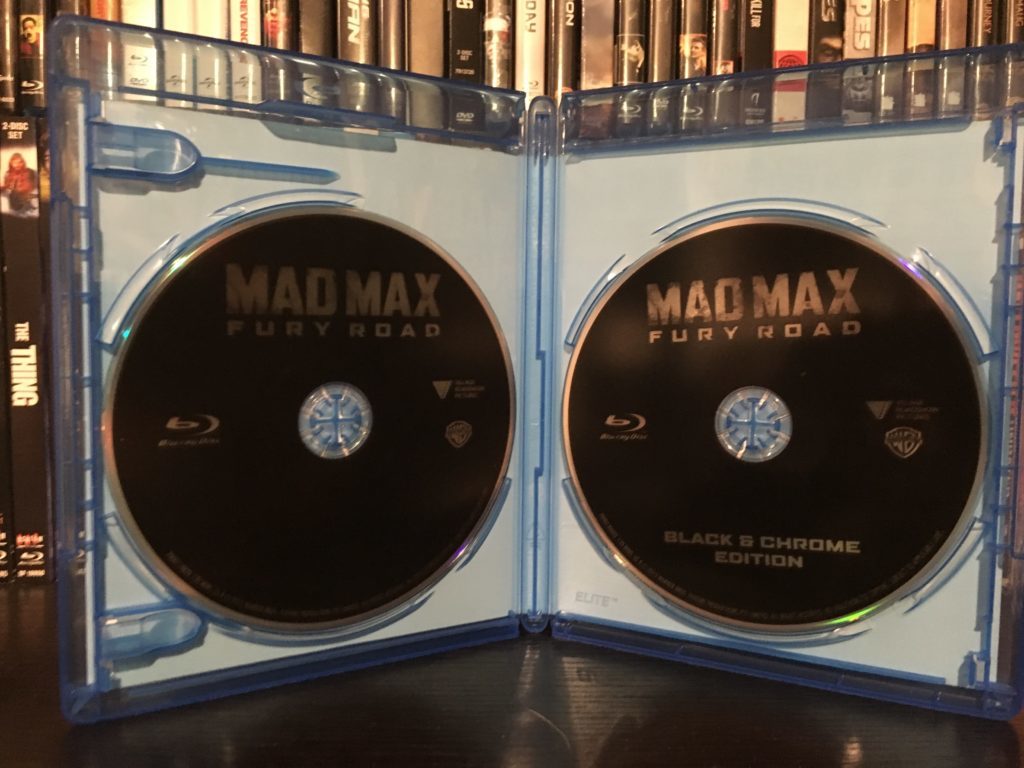 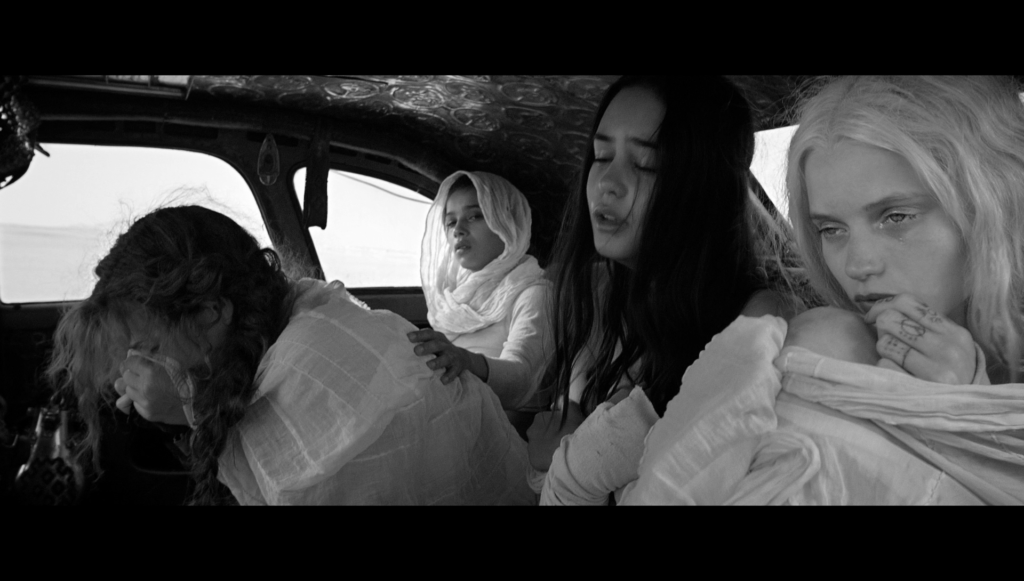 Honestly, for $25 at release day, this would be a hard sell considering the only real upgrade here is the black and white version of the film. I was expecting some additional features, or at least a digital copy of the black and white version to share with friends or family, but the only real draw is the new take on the film. If you already own Mad Max: Fury Road on one of its many available formats, it would be hard for me to justify a double dip at this price just for the black and white copy. If you don’t own the film at all, this would be an excellent option, but for those who have already spent the money to grab one of the other editions, or who have already double dipped for the 3D or 4K UHD versions, I would wait for the price to drop before making the leap. It’s an excellent experience, but I’m not sure it’s worth the release day price point. 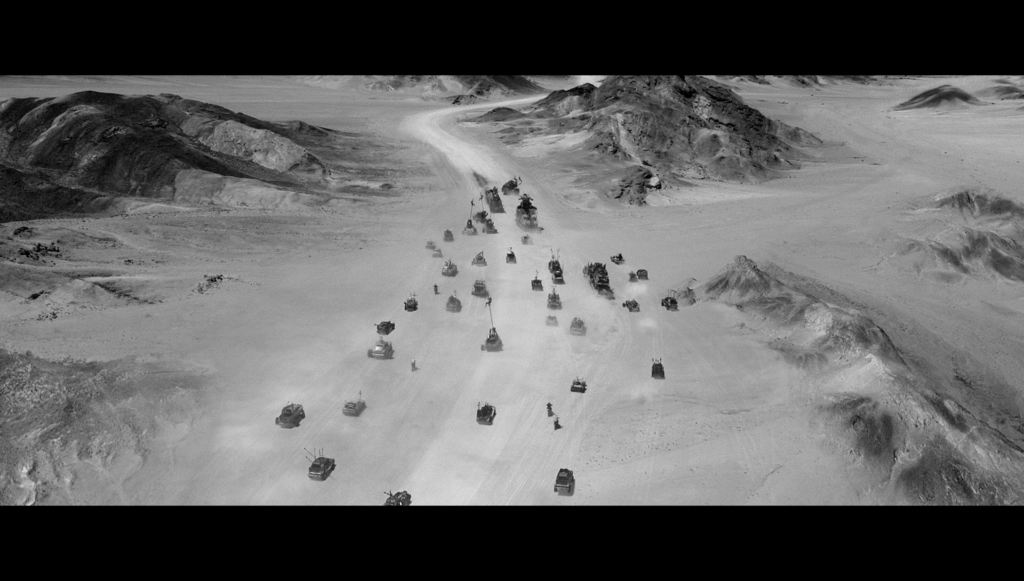